The major gods in Indian art traditions have all been given consorts. They are rarely described as celibate recluses. In their incarnate form they are explicit in their demonstrative attraction for the opposite sex. The goddesses do not lag behind. Their love for their husbands or lovers is often portrayed in an assertively earthy and sensual manner. Gods and goddesses represent a conscious duality, complementing each other. 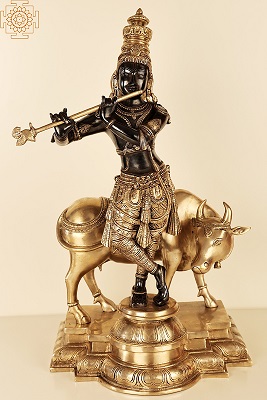 Krishna was physically irresistibly appealing. Ancient texts dwell at length on his exceptionally alluring countenance: a blue complexion soft like the monsoon cloud, shining locks of black hair framing a beautifully chiseled face, large lotus like eyes, wild -flower garlands around his neck, a yellow garment (pitambara) draped around his body, a crown of peacock feathers on his head, and a smile playing on his lips, it is in this manner that he is faithfully represented since the ancient times to the modern.

Much as in the Christian art of Medieval Europe, it is woman the Mother, the Madonna suckling a babe who has been painted with reverence, in the Indian Diaspora it is woman the beloved who has been painted with love and passion. The female friends of Krishna with their warm sensuous faces, eyes filled with passion, and delicate sensitive fingers, represent not the beauty of a particular woman, but the beauty of entire womanhood. In fact, she is there as the incarnation of all the beauty of the world and as a representative of the charm of her sex. 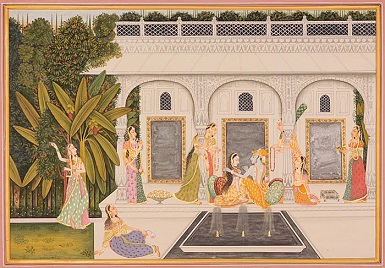 In the embrace of Krishna, the gopis, maddened with desire, found refuge; in their love dalliance with him who was the master in all the sixty-four arts of love, the gopis felt a thrill indescribable; and in making love with him in that climatic moment of release, in that one binding moment, they felt that joy and fulfillment which could not but be an aspect of the divine. Through their experience, thus, the erotic the carnal and the profane became but an aspect of the sublime, the spiritual and the divine.This cumulative myth sustained one basic point: for women, Krishna was a personal god, always accessible and unfailingly responsive. He was a god specially made for women. In the popular psyche, Krishna and Radha became the universal symbol for the lover and the beloved. Krishna was the ideal hero, and Radha the ideal heroine.

Often the colorful legends surrounding his amorous adventures with female friends prove to be of supreme inspiration to artists. The following tale describing Krishna teasing the gopis by making away with their clothes while they were bathing in the river is one such example : 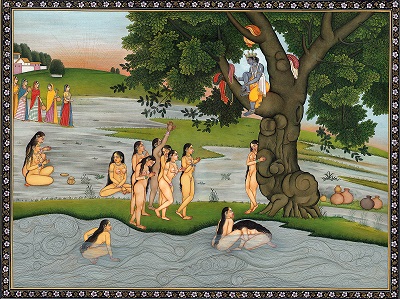 Desire and Its Fulfillment

According to tradition, unmarried girls from ten to fourteen years of age worship the Goddess Durga in order to fulfil their desire for a suitable husband. But the unmarried girls of Vrindavana were already attracted by the beauty of Krishna. Thus they daily worshipped goddess Durga early in the morning after taking a bath in the river Yamuna, and supplicated the goddess to arrange for their match with Krishna.

Each morning, the gopis would assemble together at the banks of Yamuna and, holding one another's hands, loudly sing of the wonderful pastimes of lord Krishna before entering the river. It is an old system among Indian girls and women that when they take a bath in the river they place their garments on the bank and dip into the water completely naked. The portion of the river where the girls and women bathe was strictly prohibited to any male, and this is still the system in some parts.

One day Krishna appeared on the scene with his friends. Observing the garments left on the bank by the bathing gopis, he immediately collected all the garments, climbed up a nearby tree, and with a smiling face spoke to them thus: "My dear girls, please come here one after another and pray for your garments and then take them away. I'm not joking with you, just telling the plain truth. Please don't come here all at once. Come alone one by one; I want to see each of you in your complete beauty, for you all have thin waists." 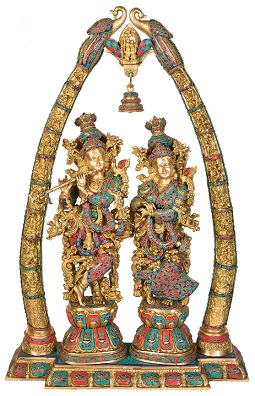 When the girls in the water heard such joking words from Krishna, they began to look at one another and smile. Though outwardly showing resentment they were joyous to hear such a request because they were already in love with him. They then addressed him : " Do not joke with us in this way, it is unjust to us. You are a very respectable boy and very dear to us, so kindly deliver our garments immediately because we are all shivering from the cold water, and end our suffering."

But all their supplications could not convince Krishna. Seeing that Krishna was strong and determined, they had no alternative but to abide by his command. One after another they came out of the water, but because they were naked, they tried to cover their nakedness with their soft hands. On observing this Krishna chided the gopis, addressing them thus: " My dear girls, you have committed a great offence by going naked in this holy river, because of this the presiding deity of this holy river is displeased with you. Therefore to please this deity touch your forehead with folded palms and ask for his forgiveness." The gopis were all simple souls, and whatever Krishna said they took to be true. They followed his command, but in doing so exposed their nakedness in all its beauty to Krishna's gaze, which was exactly what Krishna desired. 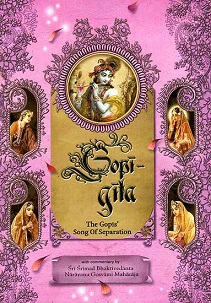 The India art tradition visualises the love adventures of gods and their female friends because it acknowledges that sex is the supreme fact in life, which provides the urge to procreate and maintain the species. It is concealed like lightning in a cloud, and in its glow is the birth of art, literature and science. Sex union among lovers is the most exalted experience in life, and in mutual ecstasy the liberation of the soul from the narrow 'self' takes place. This is the supreme experience of lovers as well as mystics. That is why in describing the union of God and soul, the extremely beautiful imagery of man and woman is employed by mystic saints and artists. Thus we see that the classification of love into 'carnal' and 'spiritual' is arbitrary and unwarranted for the so called 'spiritual' love has its roots in the so called 'physical' love. This art thus sanctifies human love and places it on a par with divine love. In it we find sacredness wedded to sensuous joy. 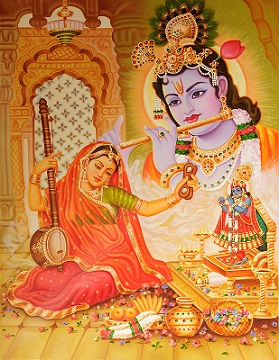 It is not a spiritual art where spirit and body are regarded as two separate entities. It is not gloomy, cold and forbidding, but is an art which is a happy blend of the sensuous and the spiritual. The spirituality is not chilled by an asceticism which is disdainful of female loveliness and the delights of love. In fact, its spirituality very much based on flesh and blood. It is an art which glorifies female beauty and revels in the loveliness of the female form. 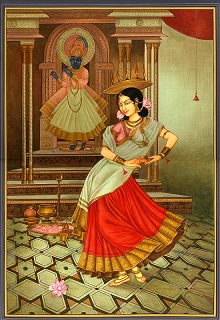 The Dancer’s Homage to Krishna

The knitting together of form and color into a coordinated harmony is the hallmark of this art. Form and color are so blended that the effect is musical. To achieve such a harmony, the artist uses both line and color in these paintings. The line which he uses is the musical rhythmical line, which express both movement and mass, representing the flow and ardor of impassioned love. The type of line which Blake admired, and regarded as the golden rule of art is this: " The more distinct, sharp, and wiry the bounding line, the more perfect the work of art, and the less keen and sharp, the greater is evidence of weak imagination." And what a rhythm these dancing lines create, a pure limpid harmony! That is why these pictures are so comforting and so soothing like the concertos of Bach and Mozart. This line is effectively supplemented by colors-the blues, yellows, greens, and reds, the pure colors of earth and minerals, which shine like jewels. 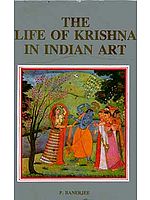 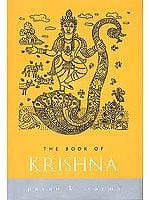 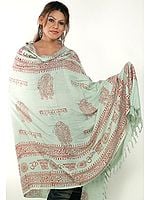 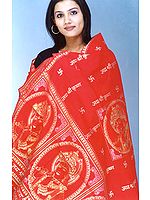 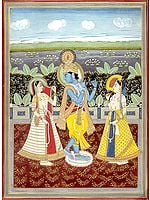 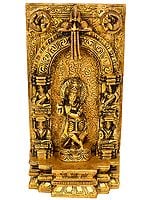 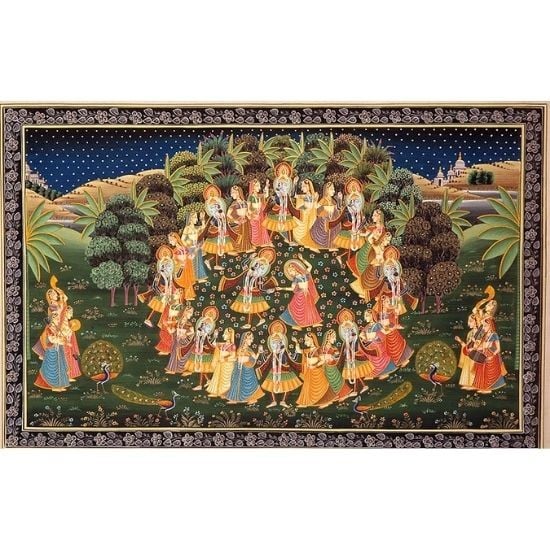 Krishna\'s Dance with the Female Cowherds - A Joyous, Spiritual Narrative
"After having returned the clothes of the unclad maidens bathing in the sacred waters of river Yamuna, Krishna congratulated them for their unflinching devotion towards him and promised that he would sport with them during the forthcoming autumn nights...The gopis\' escape from the shackles of worldly life was not however without event...Truly, Krishna is the ultimate attraction, much like a magnet draws iron files towards it...whatever emotion is directed towards god, it should be intense and continuous...the gopis puffed up with pride and each regarded herself as special...the gopis forgot their agony of separation (viraha), and on physical "contact with him (anga sanga) felt all their desires fulfilled..." 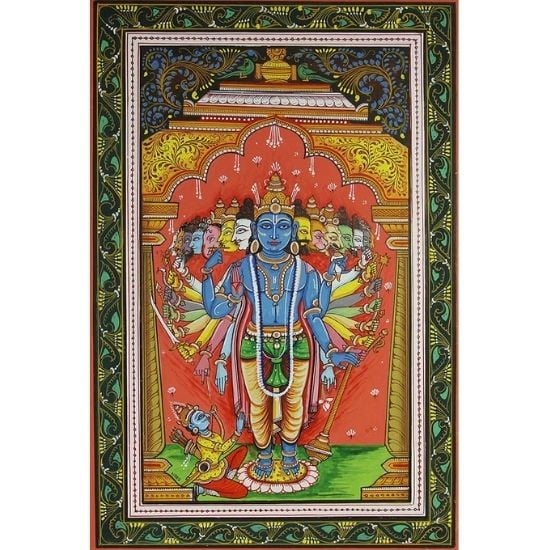 I am God: Autobiographical Fragments from the Bhagavad Gita
"The Bhagavad Gita consists of seven hundred verses. Out of these, a massive 574 have been uttered by Krishna himself, giving us an unparalleled insight into the true nature of divinity... (It) is in many ways God\'s picture album filled with self-portraits... The Great Teacher knows that human intellect is but naturally attracted to what it perceives to be extraordinary. This is made explicit when he defines himself to be \'the brilliance of all that is brilliant and the splendor of all that is splendid.\'... God is present in all that is good and bad. The choice however remains ours... That is the reason he points out to us various specific and temporal manifestations of his otherwise endless and eternal glory. By following their biographical narratives to their logical conclusions, expressed through an autobiographical discourse in God\'s own voice, we gain a clearer roadmap for identifying, and making the correct choices in our own lives..." 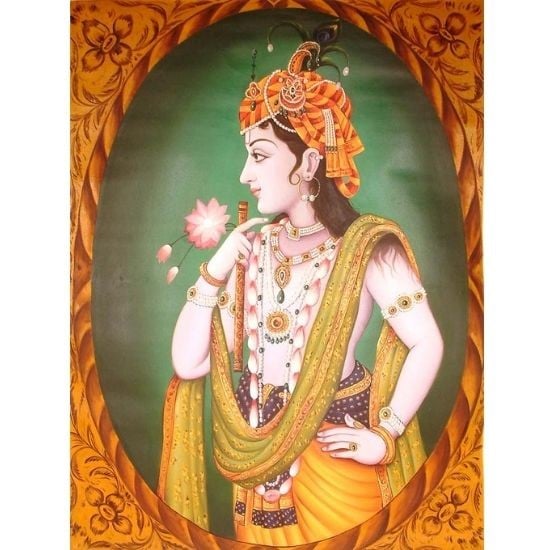 Iconographic Perception of Krishna\'s Image
"Lord Krishna...is now for centuries the most cherished theme of arts in India... Unlike Lord Vishnu, who he incarnates, Krishna is...an entity beyond time, without end and without beginning... He has been represented in visual arts... but no...form could ever define him... Forms decompose, erode and are subject to transition, Krishna is not... He exists in what he creates, yet is always beyond it. Thus, all are his forms and yet he is beyond them all... This defines Lord Krishna related art vision and the entire creative endeavor, which always fell short of its theme" 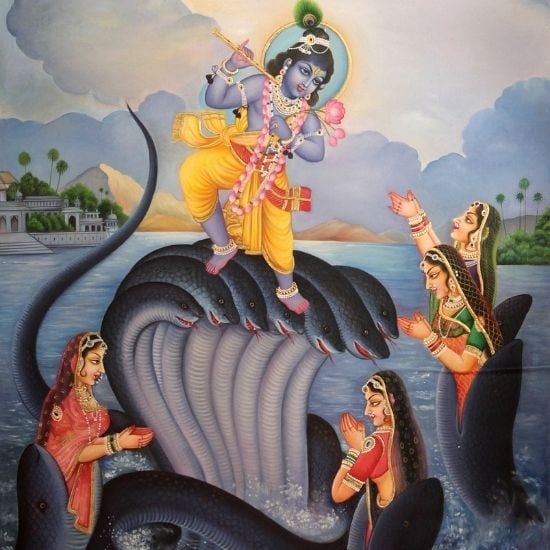 Playing with Krishna - God as Child in Art and Mythology
"Wordsworth... said: \'Heaven lies about us in our infancy.\'... as an infant and a child, Krishna is approachable... He can be approached with the intimacy with which a parent approaches a child... Such a god invites man to dispense with cumbersome formality and come to him openly, delighting in him intimately... Krishna\'s incarnation represents the human dimension of the divine... Krishna removes the poison of evil from this world while he joyously feeds on a mother\'s bosom... God as an infant does not govern the world from a majestic throne, but makes the world his playground and even while enjoying himself maintains the cosmic order. A child too seeks only to amuse himself, expressing his essential nature in every action..."

The Gita Govinda: A Journey Into Realms Of Delight
"Krishna is realised in love and in his love reveals the supreme good; all fetters break and the loved one unites with him in absolute oneness....In between the period, when he left with Radha and made love with her, the child Krishna grows to such manhood as gives him competence to make love with a far matured woman. It was obviously a mystic magnification, not a growth on the scale of time....In the love-war passes the whole night...."