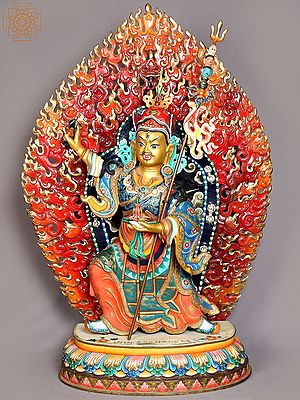 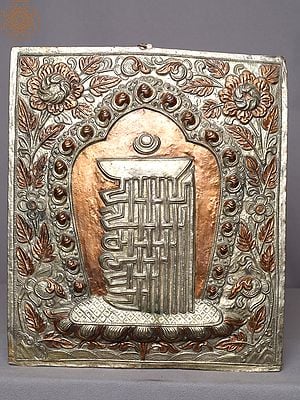 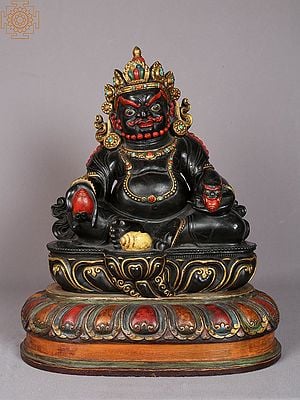 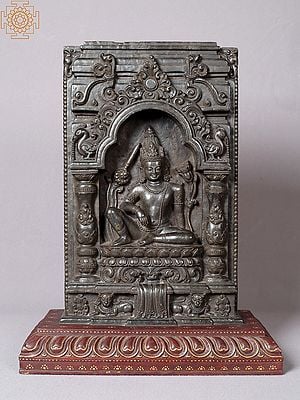 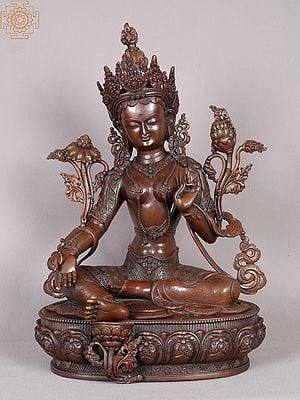 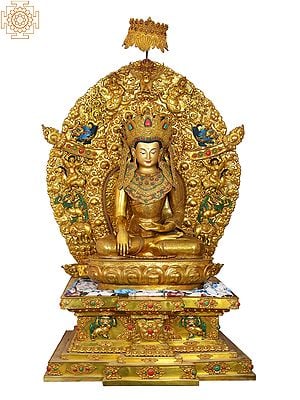 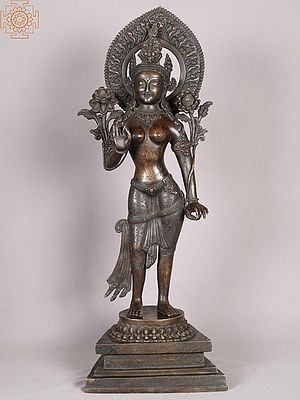 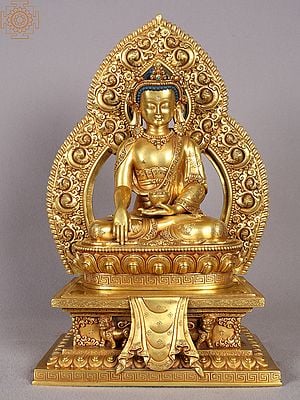 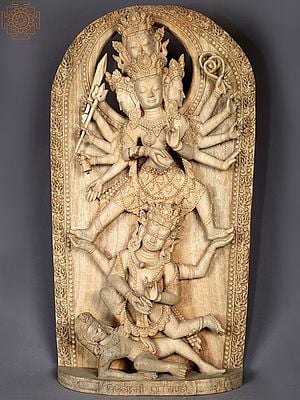 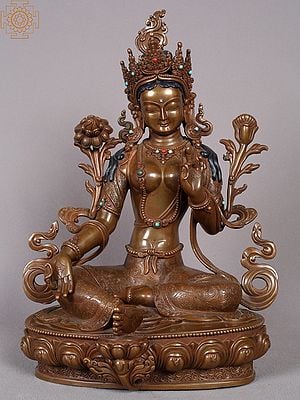 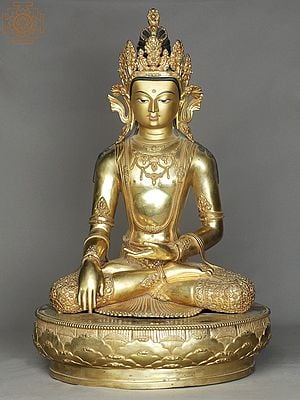 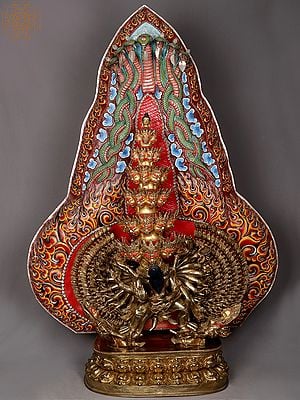 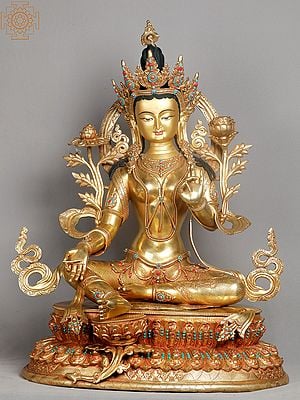 While metals are the medium of choice of Nepalese sculptors, some works in this section are fashioned from wood. Artisans in the valley also work with bone, unfired clay, and stucco. Traditionally these sculptures have been used as entrances, beams, and brackets in monasteries. They make it a point to paint, gild, and/or encrust the surfaces of the sculptures produced, lending to the works a signature aesthetic appeal. Sculptures that lend themselves to polychromy (the Nepalese have a thing for bright colours) are painted in vibrant yet liturgically prescribed colours.

In cases of gilding, the skin is painted cold gold (molten gold mixed with gelatin or mercury), with the eyes and the mouth painted on. Some of our pieces are strategically inlaid with intense colours. Another surface technique atypical of Nepalese sculpture is encrusting with semi-precious stones such as turquoises, agates, crystals, and carnelians. These add texture and sumptuousness to the works in question. Fine examples of Nepalese repousse have also been handpicked to include in this section, the beauty and intricacy of which is stunning.

The thing about Nepalese sculptures is that they exude an inner energy. It shines through the relaxed yogasanas the deities are in, the realistic folds of their raiments, and the expressive countenances that characterise the sculptural tradition of Nepal. Such sensitively rendered details, staring from the complex gilding and delicate etchings to the luscious inlays, create astonishingly lifelike figures. Representations of the gurus, mahasiddhas, and arhats are idealised, which gives us an idea of the imaginative prowess and the capacity to express of the artisans who made them.

The Nepalese are not known to conform to realistic portraiture, because in Vajrayana Buddhism 'reality' and 'realism' are essentially meaningless. Consider the example of a wrathful deity, replete with a motley of limbs and heads, violent gestures, ferocious stance. Such a composition, coherent and organic, is alive and potent with a force that could be captured almost exclusively by this great sculptural tradition.

There's always room in the home of a true devotee to embrace a magnificent statue of their beloved divine deity. Our masterpiece heavenly statues are one of a kind, handcrafted with love and made of pure gold. They are a treat to the eyes and are of the finest quality with intricate designs and a superfine look. Some of the masterpieces that have been created by us to date are-

A. Six-armed white Mahakala: This Super Fine copper idol of the great Mahakala gilded with the finest 24 karat gold is sure to catch anyone's eye. Mahākāla is a wrathful deity in both Hinduism and Tantric Buddhism. In Buddhism, Mahākāla is viewed as the sacred dharmapala. While in Hinduism, Mahākāla is a wrathful manifestation of Shiva, and is the partner of the goddess Mahākālī; he most unmistakably shows up in the Kalikula faction of Shaktism.

Mahayana Buddhism, and all schools of Tibetan Buddhism, depend on Mahakala as gatekeeper divinity. He is portrayed in various manifestations, each with various characteristics and perspectives. He is additionally viewed as the form of various creatures in various cases, to be specific Avalokiteśvara or Cakrasaṃvara. Mahakala is quite often portrayed with a crown of five skulls, which addresses the change of the five kleśās (negative hardships) into the five wisdom.

B: Shakyamuni Buddha: Meet the historical Buddha in his grandest form!! Shakyamuni Buddha is a name given to the  Buddha in the pages of history, particularly in Mahayana Buddhism. So it's almost consistently the situation that when somebody is discussing Shakyamuni, the individual in question is talking about the authentic figure who was conceived as Prince Siddhartha Gautama however at that point became known as Shakyamuni solely after he turned into the Buddha. This individual, after his enlightenment, is popularly called Gautama Buddha.

Gautama Buddha was an austere and otherworldly educator of South Asia who lived during the latter half of the first Millennium BCE. He brought the concept of Buddhism and is loved by Buddhists as a completely enlightened being who has shown a way to Nirvana, independence free from obliviousness, resurrection and languishing. Lord Ashoka's Lumbini pillar engraving celebrates the Emperor's journey to Lumbini as the Buddha's place of birth, calling him the Buddha Shakyamuni.

C: Bhumisparsha Buddha: The Bhumisparsha Buddha gilded in gold is symbolic of the resilience and passion to overcome obstacles present in all of us. Bhumisparsha signifies 'touching the earth' in Sanskrit. The Buddha's awakening under the bodhi tree, when he welcomed the earth goddess, Sthavara, to take the stand concerning his fulfillment of enlightenment, is represented by this mudra. It is framed with each of the five fingers of the right hand reaching out to contact the ground.

The right hand, in earth-touching mudra, is enhanced by the left hand, which is kept level in the lap in the dhyana mudra of contemplation, and addresses the association of strategy and wisdom, samsara and nirvana, as well as acknowledges the regular and extreme wisdom. Shakyamuni conquered Mara's obstructions by concentrating on Truth.

Q1.What are the 3 primary beliefs of Buddhism?

Buddhists accept that human existence is one of misery, and that contemplation, spiritual and physical work and appropriate conduct are the ways of accomplishing enlightenment, or nirvana.

Q2. Are there sins in Buddhism?

There are five sins of this sort: killing one's mother or father, killing an arhat (holy person), harming the body of a buddha, and causing a division in the Buddhist religious community.