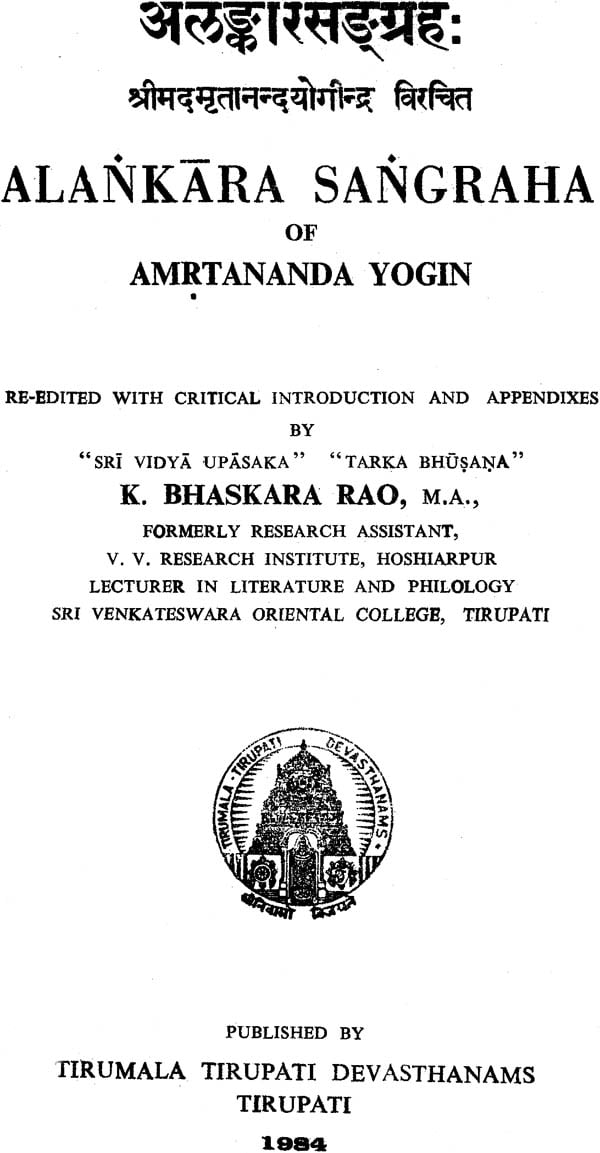 The Alankara Sangraha (AS) of Amrtanandayogin is a very good work on Sanskrit poetics. The treatment of the subject of poetics in full with brevity and lucidity is the special feature of this work.

The AS. We once published at Calcutta in 1887 from chapters 1 to 5 only. In 1949, the AS. Was published in full by the Adyar Library, Madras. It was edited by Pandit V. Krishnamacharya and Pandit K. Ramachandra Sarma. It seems that the work first serially appeared in the Brahma Vidya, the Adyar Library Journal, and subsequently the present critical edition made its appearance. In 1950, the AS. was published as Sri Venkateswara Oriental Series- No. 19 under the General Editorship of Prof. P.V. Ramanujaswami. This work was then edited by Vidvan, Sahitya Siromani P. Balakrishnamurthi, Research Assistant in Telugu at Sri Venkateswara Oriental Research Institute, Tirupati.

The Administration of the TIRUMALA TIRUPATI DEV AS THANAMS proposed to re-issue the AS. in the year 1976. The printing work was commenced in Nov 1976 itself. The present editor was nominated for proof reading of the work. Minor corrections were made while the proofs were being gone through the press by the editor. He also felt then that the work deserved a second revision, as the Adyar Edition of the AS. Stands best for reference purposes in the Indological field, even to this day. Moreover, the text of the AS. As edited by Sri P. Balakrishna murti required ample corrections to bring the same on par with the standard Indological publications. Hence the present editor sought the permission of the T.T.D. authorities for editing the text afresh utilizing the Adyar Edition, which was not done earlier by Sri P. Balakrishnamurti. The T.T.D.- authorities were kind enough to accord permission to re-edit the text and prepare the critical Introduction, appendixes etc., Thus, the T.T.D. authorities are happy to present the second revised edition of the Alankaru Sangraha for the benefit of the Sanskrit scholarly world.

In editing the text of the AS. Critically, the editor utilized the Adyar Library Edn. As far as the Prakrta passages with their Sanskrit renderings and various readings are adapted. The Edn. Was also used in preparing the critical introduction and the appendixes. On behalf of the T.T.Devasthanams, the editor acknowledges his indebtedness to the authorities of the Adyar Library, especially to Mrs. Seetha Neelkanthan, the Librarian who responded for his request at once in granting permission to utilize their critical edition.

The editor is highly thankful to the administration of the Tirumala Tirupati Devasthanams for giving an opportunity to him to edit the AS. Critically. The editor had to prepare the editorial material single handed while attending to his regular work as lecturer at S.V. Oriental College, Tirupati. Hence there are some mistakes of commission and omission, in the text. An errata was given at the end of the work for making necessary corrections in the text of the Alankara Sangraha. As the popular saying goes.

Alankara Sangraha of Amrtanandayogin, a work dealing with all the aspects of Rhetoric is now presented to the public for the first time in original Sanskrit. All the manuscript copies of this work available in different places are only fragments of the text containing a few chapters here and there, most of them containing chapters from 1 to 5 or 6. These manuscript copies are found deposited in various manuscript libraries all over India. It is said that Alankara Sangraha with an English translation was printed at Calcutta in 1887. Late M. Krishnamachariar stated that the above Calcutta publication consisted of only the first five chapters. The manuscripts bearing the numbers 12794 and R. 2486 of the Government Oriental Manuscripts Library with the title Alankara Sangraha contain five and four chapters respectively. The five chapters of the former and the four of the latter put together make the nine chapters of the text, as the first five are from 1 to 5 and the other from 6 to 9. There is a manuscript in the Madras University Library containing ten chapters, but certain portions in 9th and 10th are missing in it. The Adyar Library manuscripts contain eleven chapters in all but the last one is badly damaged and the matter could not be made out. A manuscript of the Goutami Library of Rajahmandry is said to contain nine chapters. Our Manuscript bearing the number 6280 of the S. V. O. Institute contains eleven chapters. This manuscript appears to contain the matter copied from the manuscripts available at Madras. A palm-leaf manuscript copy is also available in our S. V. O. Institute with the No. 6094 and it contains only the first five chapters. The manuscript copy with the No. 6280 of our S. V. O. Institute contains the following chapters.

Significance of the Alankara Sangraha

Works on Alankara Sastra generally deal with the technics of the Kavyas of the Sravya type, the technics being Alankara, Guna, Dosa, Vrtti, Rasa etc., while Dasarupaka provided the technics of Drama, the Drsya type of kavya. Our author, Amrtanandayogin, observing the eye to be a quicker route to the brain than the ear has furnished information on Dramaturgy along with other topics of rhetoric. He has gathered the subject matter from various sources where they are limited and made the Alankara Sangraha a work of unique nature. Befitting the title the Alankara Sangraha represents a concise compendium of all the writings on poetics and dramaturgy down to its times. Alankara Sangraha stands on a par with the standard texts such as Sahitya Darpana and Prataparudriya which furnish the technics of both the Sravya and Drsya types but still it contains some more information on the qualities of the Sanskrit Alphabet and ganas of prosody an important factor to be noted by all poets in their compositions. It also furnishes information about the varieties of poets according to their tastes in poetry and Literature. A chapter called Catuprabandha-laksana is also added in the end. These Catuprabandhas might have been well appreciated by the Literati of his time, their theme being mainly the praise of patrons or favourite deities.

In treating of Dramaturgy the author deals with the subject in a manner similar to the Sahitya Darpana, describing the Uparupakas and Natyalankdras. Slight changes in names are seen in certain types of Uparupakas when compared to the Sahitya Darpana. Most of the matter relating to Dramaturgy appears to be drafted from the Dasarupaka and Natya Sastra. He quotes Kohala the ancient author on Dramaturgy- and non else. He gives illustrations from Rudrata, Dhananjaya and quotes a verse from Dhvanyaloka, etc. and also verses of Dhanika such as etc .

Similarly for Uparupakas as in Sahitya Darpana the names of all except Natika and Sattaka are given.

More than the subject-matter furnished in S. D. Alankara Sangraha gives some elements of Purvaranga and five varieties of gandam, a significant feature, of course the matter being adapted from Natya Sastra and other texts.

Alankara Sangraha though small without any discussion on the topics is a fountain of Alankara Sastra in its essentials and furnishes the students a fund of knowledge. The value of the treatise is enhanced by the fact that it quotes numerous verses as illustrations composed by eminent authors, some-times from works such as Maricha Vanchana, Valivadha, Udattaraghava, Nalavijaya, and Deviparinaya which were in vogue in those times but are no longer extant. It appears from the selection of his examples from different texts that the author must have been a versatile scholar well acquainted with most of the eminent works in his days.

The Author, his time and works,-His date.

The author Amrtanandayogin states in the introduction that he wrote the book Alankara Sangraha at the instance of Manva Bhupa. Excepting the praise of his patron Manva, the author has not furnished any further personal details. No- where in the text did he mention his place and parentage. Being a philosopher, which' is inferred from the name itself, he might not have furnished his personal details. As for the date of this work Alankara Sangraha, M. Krishnamachariar has stated in his History of Classical Sanskrit Literature that king Manva Bhupa, son of Bhakti Bhupa, probably lived about 1250 A. D. Amrtanandayogin being a contemporary of the king may also be assigned to the same period. King Manva is said to be a devotee of Siva and in some texts the reading says that he is devotee of Jina.

Certain portions of a Telugu text on Rhetoric, called Kavyalankaracudamani appears to have been based on the Alankara Sangre -ha. The former is a book of the early years of the 15th century. Amrtanandayogin, therefore, can be placed anterior to that date.

In one of the inscriptions in Nuzvid Taluk of Krishna Dt, the name of a king named Manva Bhupa is found, and is said to have flourished about the 13th century. There are no details in the inscription to prove the identity of the two Manva Bhupas.

Amrtanandayogin gives verses as illustrations which belong to Dhanika and certain portions of the work dealing with Dramaturgy are identical with Dasarupaka. So he may be placed after Dhanika. Some of his examples are the same as those found in the Kavyaprakasa of the 12th century. 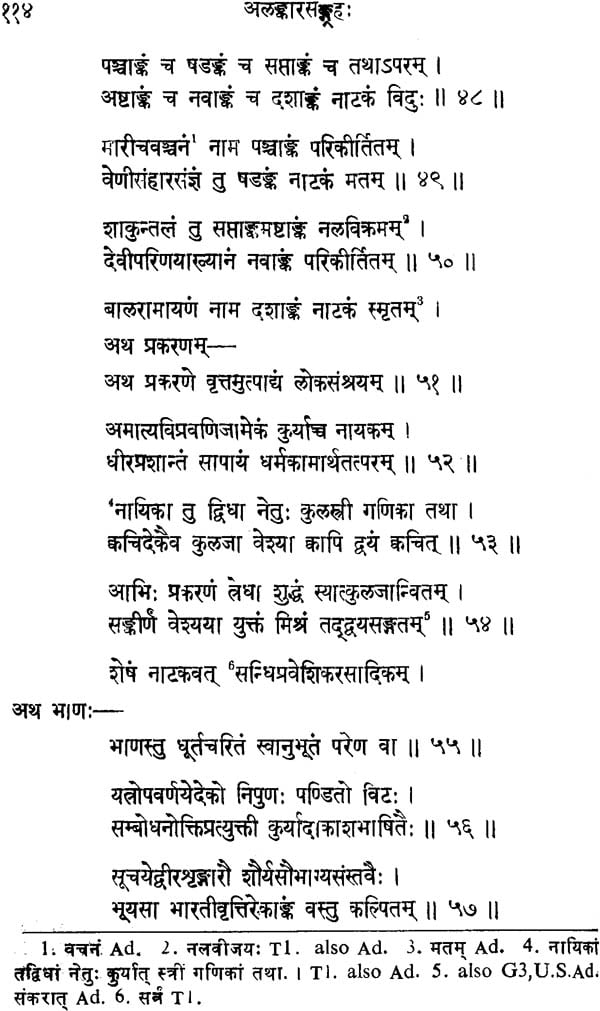