FREE Delivery
$31.20
$39
(20% off)
Quantity
Ships in 1-3 days
Notify me when this item is available
About the Book
Is it possible to remove political institutions from their cultural context? The question is a relevant one in the wake of recent debates on the role of religious and social identities in the functioning of the modem Indian state The ritual bond between the Jagannatha Temple, Puri and the Gajapati kings of Orissa aptly demonstrates the enduring power of such a link. This book explores the evolution of this relationship since the construction of the Temple by Anantavarman Codagangadeva in AD 1147, until the takeover of Orissa the British East India Company in 1803.

When this link was taken over by colonial regime we see a fundamental shift in the premise underlying the Temple-State relationship. Certain institutions were retained to promote notion of the 'Compact Ideal'. Yet the were bereft of their contextual framework. The Gajapati raja was removed from the throne but was g. authority over Temple functioning. Temple was de-linked from the ne of resource distribution that connect with the land. Yet it was circumscribed and denoted as a 'separate' sacred entity, removed from the State, an expression of the Company regime' benevolent tolerance of local customs and beliefs.

The unique situations of conflict contradictions that marked the clash between 'traditional' and 'modem' systems of governance of social institutions, form the substance of the study of the Jagannatha Temple.

In the beginning of the nineteenth century, 'Juggernaut' figured as the major target of Evangelicals in British Parliament against 'British connections with idolatry', whereas at the end of the twentieth century, Puri, with its famous jagannath cult emerged as India's best-researched 'sacred complex', superseded temporarily perhaps only by Ayodhya. The impact of the colonial regime, however, on the temple realm and the ritual position of Puri's Gajapatis has only recently become a focus of research.

Dr Mubayi's study consists of two distinct but strongly interconnected major parts, viz., the precolonial development of Gajapati kingship and its penetration by and modification under the impact of the colonial regime. Both are connected by an intermediate third part on early European travel accounts and their images of 'Juggernaut'. The first chapter begins with a short description of the different historical stages of the Gajapati kingship which is followed by a systematic analysis of the temple-kingship nexus under the local Khurda dynasty during Mughal and Maratha rule in Orissa. The 'politics of patronage' of the Khurda Rajas was characterized by a system of political subordination and ritual dominance which allowed them not only to survive under non-Oriya rule but also to uphold their ritually dominant status among the feudatory chiefs of Orissa. The second chapter 'Access, Status and Redistribution in the Temple Realm' explores the temple as an arena of constant contestation of hierarchy, power and authority between king and priests. It analyses the various nuclei of power and the specific spheres and means of contestation, e.g. access to the deity, redistributive networks of bhoga/prasada, and illustrates them paradigmatically by Puri's famous ratha yatra. The third chapter depicts the early European travel books of Thomas Bowrey and Francois Bernier and their influential accounts of Puri as 'Precursors to Colonial Policy'. The epistemology of their descriptions of the car festival is interpreted by Dr Mubayi as a juxtaposition of 'western norm and eastern deviants' and 'western rationality v. eastern credulity' and as an attempt to 'feminise' Indian society. The fourth chapter 'The Temple, the Raja and the Colonial State' analyses the stepwise destruction of the old Gajapati regime and the colonization of the sacred kingship of the Khurda Rajas through their reinstallation as bureaucratically supervised 'Superintendents' of the Puri temple. The colonial appropriation of the temple realm through extensive documentation is exemplified by an analysis of three key documents of the early colonial period. The final chapter on 'Power and Property: The 'Profanization' of Temple Networks' is an elaboration of further changes under the colonial regime. Its major focus is the struggle for control over landed property and the process of its profanization through colonial settlement policies and litigation. The attitude of objectification and circumscription of property was largely instrumental in the delinking of resources from their sacred context.

Dr. Yaaminey Mubayi succeeded in demonstrating the unbroken continuity of Puri's temple realm as a 'fulcrum of the balance of power in Orissa' even during the colonial period. Whereas previous studies on the 'Jagannath/Gajapati complex' were overlaid with a sense of the dominance of royal authority as an integrative agency, she seeks to redefine relationships of power as possessing a certain ambiguity, of portraying a great deal of ambivalence. In this context her interpretation and portrayal of vamsavali chronicles, certain rituals and festivals of Puri as an arena of contesting interests and of negotiation of status and power are particularly revealing. Her story of early colonial penetration of Puri's temple realm as Orissa's most important focus of political power, its subversion and final appropriation through bureaucratic means is equally fascinating. Dr Mubayi therefore is certainly right to conclude her study with a reference to C. Geertz's well known dictum that ritual is not merely the illustration of power, but power itself.

In 1803, the troops of the British East India Company entered Puri and took over the administration of the province of Orissa. This led to far-reaching changes in relationships of status, rights and access to land and structures of authority in the region. The penetration of local institutions, particularly the temple of jagannatha at Puri, by colonial apparatuses of controlled to the creation of a separate discourse of power that re-contextualized the prevailing ritual and political structures. Prior, to the advent of the British, the long-established link between the temple at Puri and the Gajapati kingship of Orissa (after evolving over a period of seven centuries), was an important factor underlying political and cultural institutions and relationships. This link played a major role in the reformulation of these institutions in the colonial environment. The following chapters discuss the manner in which the temple-state relationship formed a backdrop for the shifts and changes in the balance of power in the region, both prior to colonial incursion and subsequently.

My study deals primarily with perceptions of order within the social realm surrounding the temple in the pre-colonial and early colonial periods. This order was re-expressed in the period of the freedom movement, when issues of identity and the politics of nationality caused a reformulation of the past with a sense of cultural nostalgia. One such reconstruction is an Oriya play written in the 1940s, recalling the martyrdom of Bakshi Jagabandhu, the commander-in-chief of the Khurda raja, who led a rebellion in 1817, against the large-scale dispossession of the Khurda paiks (royal militia) by the new agrarian policies of the Company government. The retelling of the 'story' of British entry into Orissa is replete with contemporary rejection of colonial rule and the nationalist view of the British as a defeated culture. I will now present a section from 'Bakshi jagabandhu' by Manoranjan Das, as I believe that it will communicate a sense of the ritual and political linkages and hierarchies of privilege and status which were disrupted by colonial incursion. The centrality of the raja to these linkages and his essential connection to the maintenance of order in society, is significantly expressed in this account.

In the jail, there are two adjacent cells. Evening has fallen. In one of the cells, holding the iron railings, stands jayikrushna Rajaguru, Diwan of Khurda. In the next cell, Kasturi (a dancing girl) stands in a similar position. jayikrushna's mind was far away in the past. Kasturi's melodious voice rises in song.

'What is the good of relating the past,
again and again the mind awakens,
and drifts far away along with the clouds, ....
KASTURI. Master! (A deep sigh may be heard from the adjacent cell) How
did all this happen, Master? (Another sigh) Master .....
JAYIKRUSHNA. (starts violently) Eh ... ?
KASTURJ. Were you asleep? Did you call out?
JAYIKRUSHNA. Not sleep but the dreams .....
KASTURJ. Dreams? Ah! Surely, Master, there is happiness only in
dreams. What dreams?
JAYIKRUSHNA. The phirangis (British) had besieged Barunei (the site of
Khurda fort) ... days went by ... twenty-one days went by ... food
and arms were finished ... the only thing that remained was the
courage and enthusiasm in the hearts of the paiks. The situation
was dangerous. Chhamu (the Gajapati raja) was undecided ...
could not perform his duty (kartavya) ... then there was an
argument between the minister (himself) and the Bakshi. The
capable Bakshi, whose ancestral right was rebellion (Biplab jara banshasiddha adhikara) ... who had earlier made the mistake of agreeing to a settlement with the British ... the minister tried to make him realize his mistake, and a single mistake had a lasting effect. The Bakshi's skill could not prevent the minister and the raja from being taken prisoner ....

The dream context reinforces the fluidity of the situation, when the entire structure of social and political order was subverted on account of a single mistake by the Bakshi. This itself indicates the interconnectedness of the land with the raja and the aristocracy. The raja's obligation to his people and his land was pressing upon him, yet he did not fulfil it. The imprisoned Jayikrushna is still 'master' to the dancer, Kasturi. thus, a glimpse from the play illustrates the dynamism that inked and energized the structures of order and authority in the region, as well as displays the layering of rights and status. 'his amalgam of status, privilege and reciprocity forms the cultural context for my study.

Situated on the north-eastern coast of the Bay of Bengal, Orissa as stood at the confluence of northern and southern cultural and political influences. Patterns of kingship and ideology and networks of resource distribution established since early Medieval times led to the creation of an integrative dynamism that energized the region. Within Orissa, its fertile coastal belt and the surrounding semi-circular tracts of forest bound in the rest by the Eastern Ghats, comprise geographically distinct cultural and political zones. The social milieu depicts this University through the existence of a dynamic interaction between Universe groups, including tribals. Orissa has been regarded as one of the finest examples of synthesis between tribal and Brahmanical cultures, reflected in the crystallization of the cult of jangannatha."

The temple of Jagannatha at Puri has been viewed as forming nucleus of political and cultural integration in Orissa. There are a number of references to Puri as a place of pilgrimage in the puranas. The Anargharaghava Nataka? a ninth century play by Murari Mishra, mentions the god Purusottama (later identified with Jagannatha) on the eastern sea-shore. An inscription at the saradadevi temple at Maihar in Madhya Pradesh (tenth century) also identifies the deity Purusottama with the 'Odra' (Orissa) country, i.e. the area around Puri. Sankaracarya is believed to have visited Puri and founded the Gobardhana matha there in the eight century. Caitanya lived in the temple for a number of years in the sixteenth century and is believed to have died in Puri. The thirteenth century poet Jayadeva, author of the Geeta Govinda, is believed to have composed his magnum opus in the precincts of the temple.' Thus, Puri had long been a centre of sacred activity, even before the construction of the present temple 'Jagannatha by Anantavarman Codagangadeva in AD 1147. 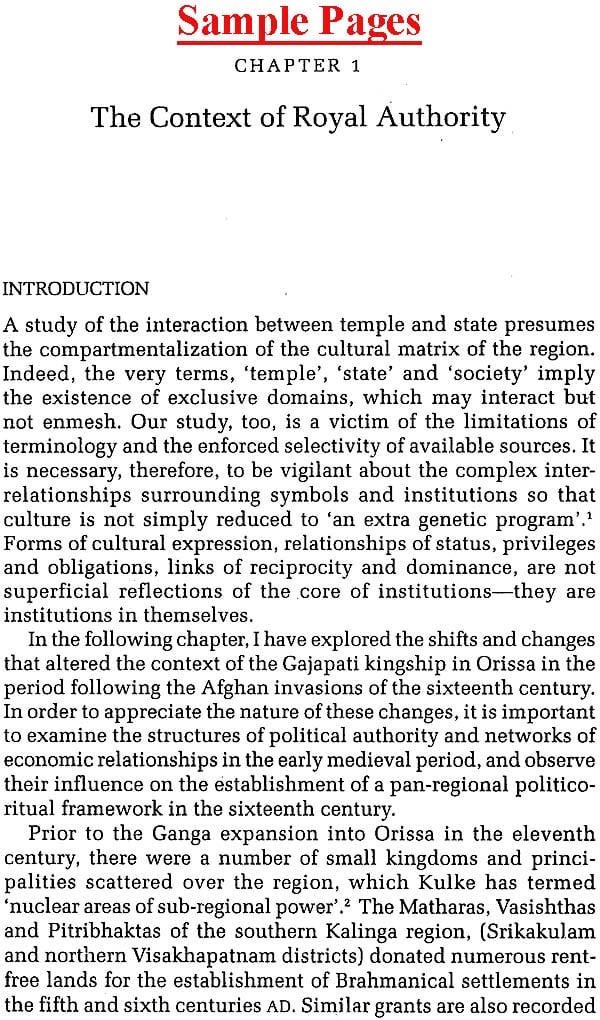 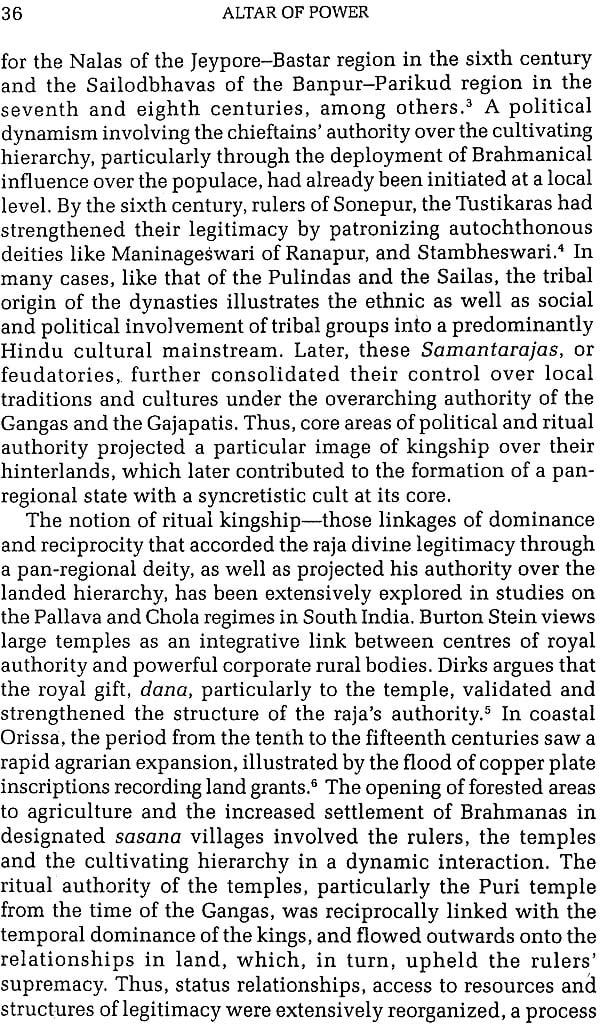 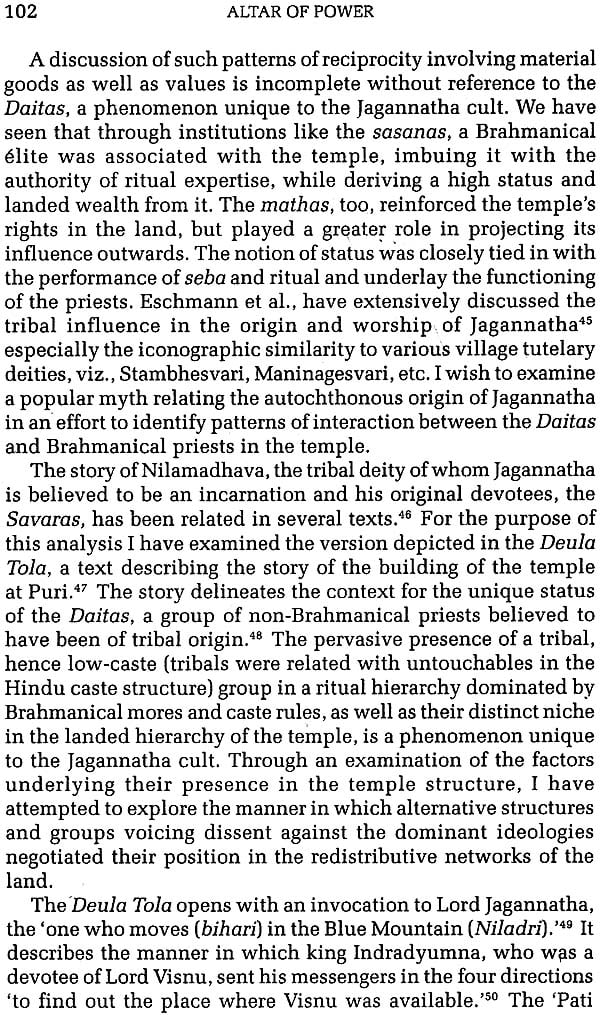 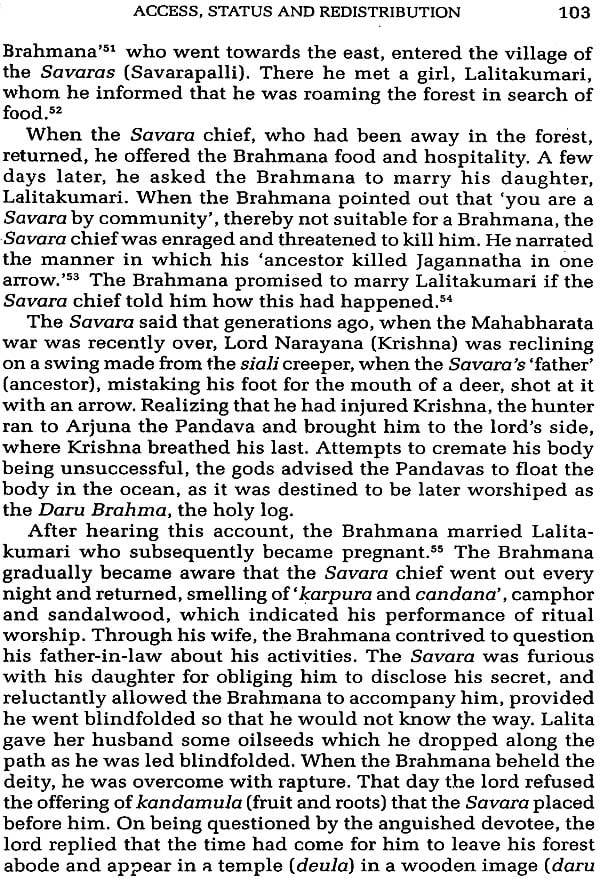 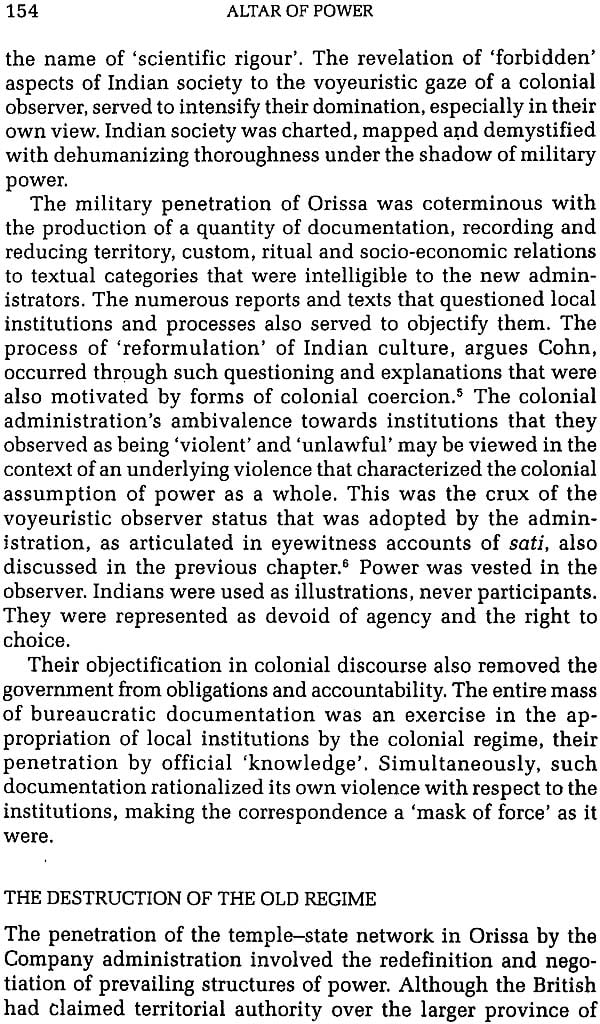 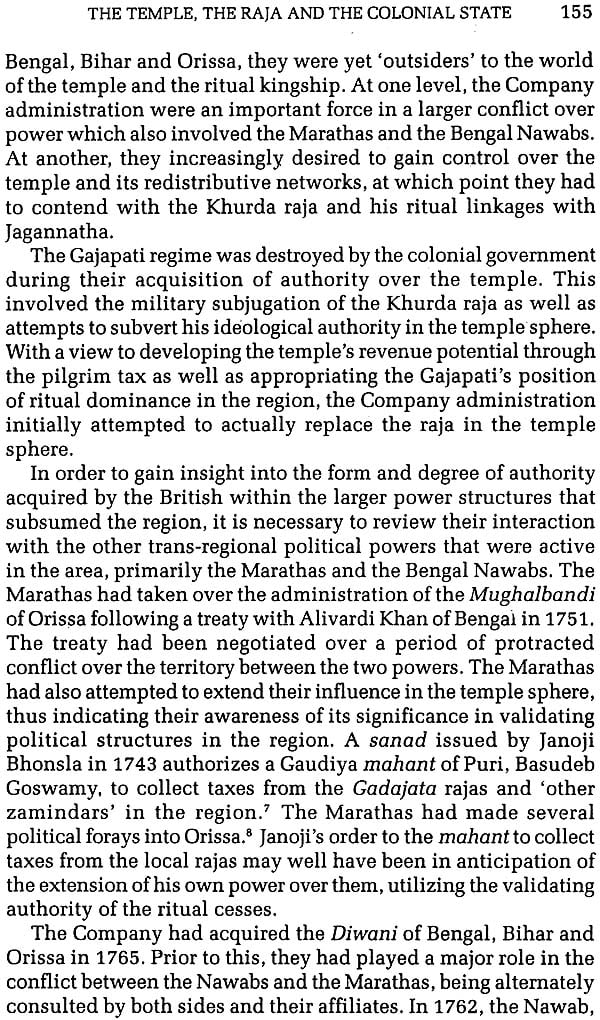 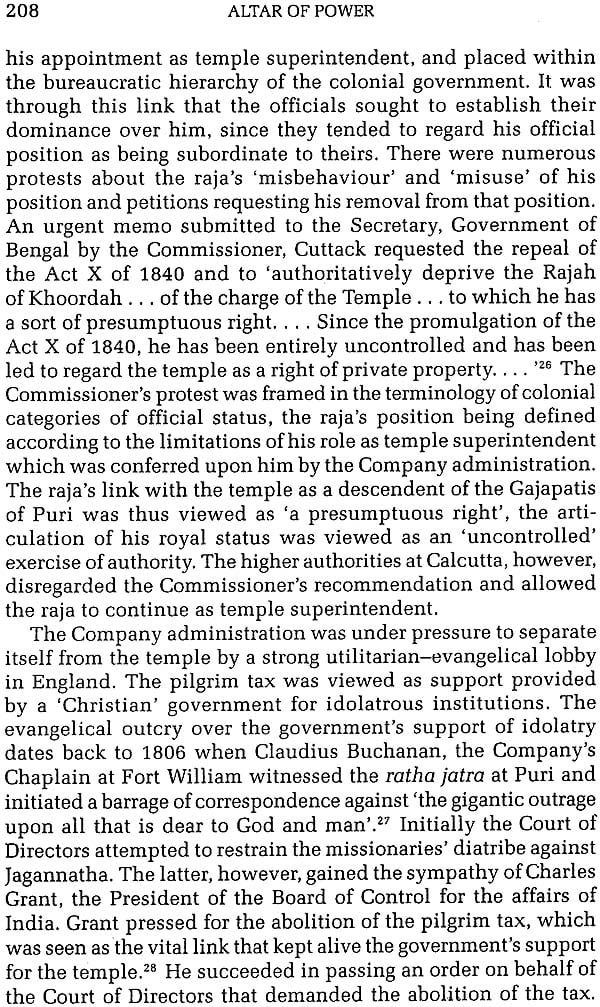 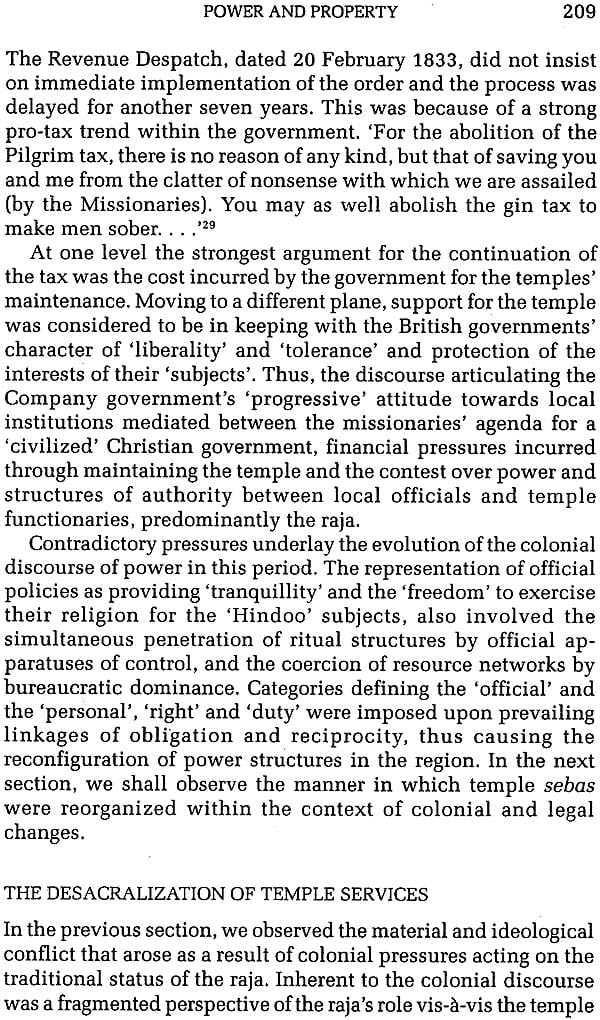 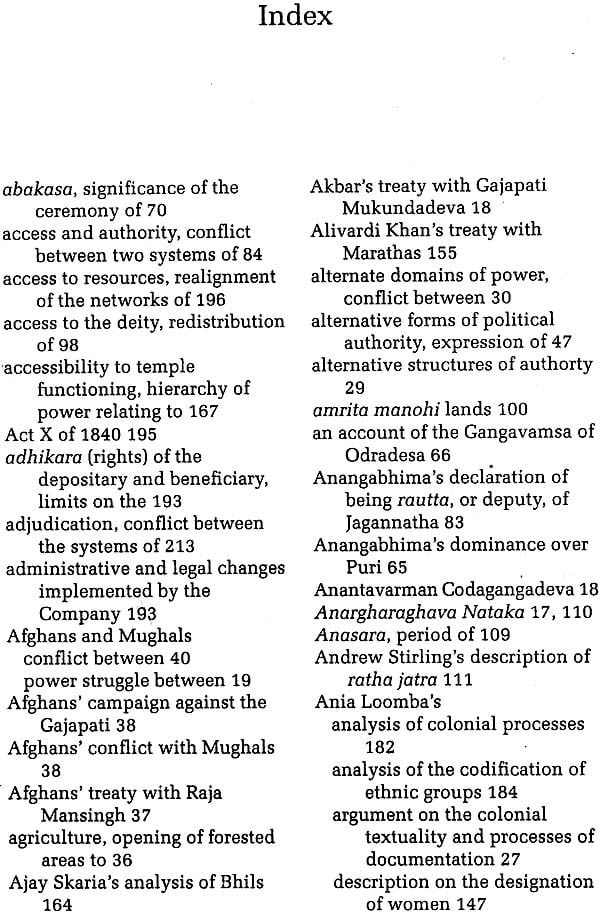 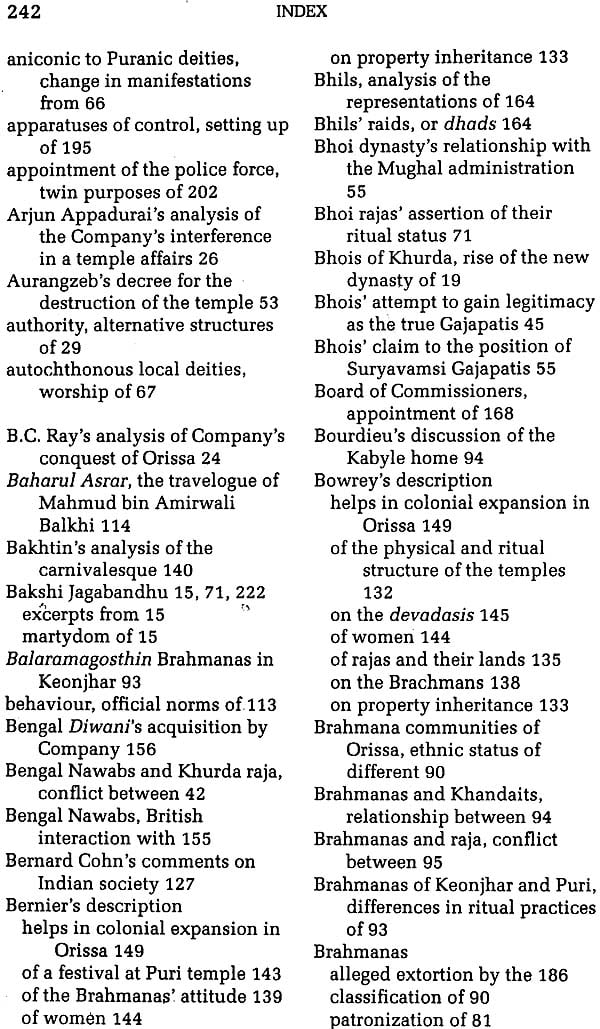