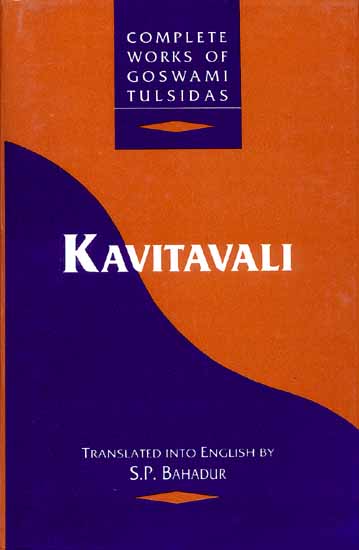 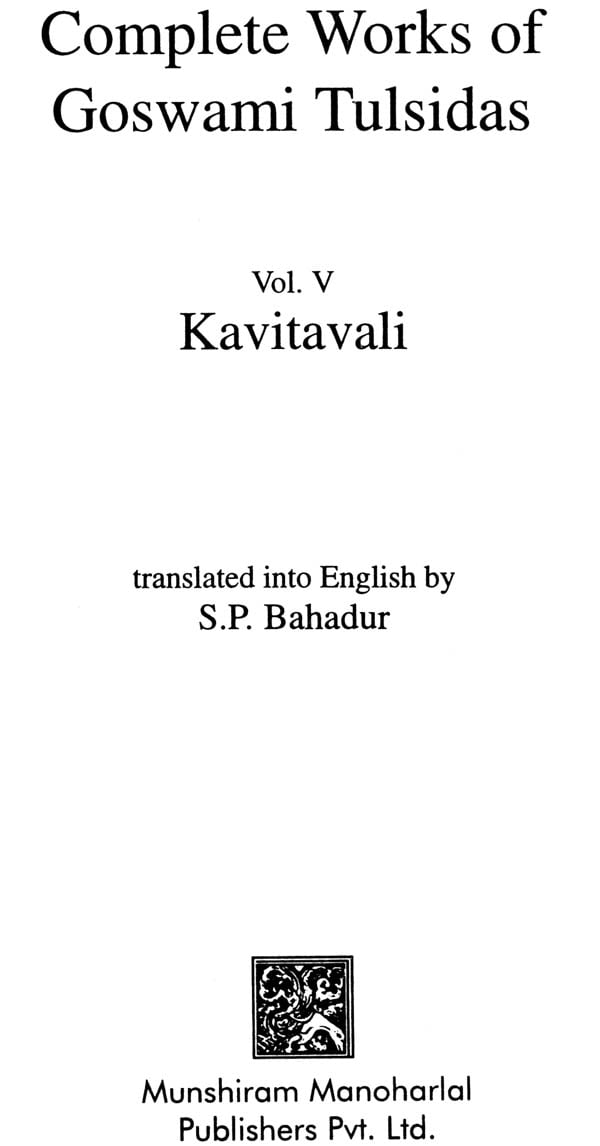 Kavitavali is an anthology of poems containing 325 verses. The first part comprises Rama-katha (Deeds of Rama) in which some events from the life of Rama are briefly narrated in 142 verses, bringing out the Purushottama aspect of Rama. The second part comprises Rama-guna-gatha (Glory of Qualities of Rama) in 183 verses. Hailing the Glory of Rama is a feature of bhakti sadhana (discipline of Devotion) of which Tulsidas was an ardent exponent.

Kavitavali is a work of special significance among literary works of Goswami Tulsidas. The work is composed in two parts. In the first part the poet composes poems on Rama-katha (Deeds of Rama); and in the second part he sings of Rama-guna-gatha (Glory of the Qualities of Rama). The human aspect of the Di vine Incarnation presented in Kavitavali is the main feature of the work. It reflects Divinity's concern for the welfare of human beings. Ramavatar was the descent of Divinity in the world of His creation. In his earthly life, Divine Rama was essentially human. He is therefore hailed as Purnavatar (the complete Incarnation). He was deeply interested in the quality of human life, its ethics and ideals which were translated into Rama-Rajya, a concept enshrined in our hearts to this day. In his human role, Rama was Purushottama: the human par excellence. He was severely tested but never found wanting. Born in royalty, on the day of his installation as Crown Prince, he was banished to live like a hermit for fourteen years. He faced more challenges in life than those encountered by many of us, but he remained unperturbed, resolutely pursuing righteousness, regardless of pleasure or pain. He lived so humanly that we are often inspired to equate his life with our own while seeking solutions to our problems, asking ourselves the question: 'What would Purushottama Rama have done?'

Tulsi has sung of the Deeds of Rama in Ramacharitmanasa, Vinaya Patrika, Gitavali and Dohavali also. In Ramacharitmanasa, which is revered as a Scripture of Rama, he pays obeisance to the Nirguna aspect and records the Earthly Deeds of Incarnated Saguna Rama; in Vinaya Patrika he invokes Mercy of Nirguna Rama through vinaya bhakti; in Gitavali Tulsi sings of the Saguna symbol of Rama; in Dohavali specific deeds of Rama are mentioned which illustrate moral and ethical aspects of life. In Kavitavali, Tulsi's poems of Rama-katha brings out the high ideals of his earthly life. He refrains from hailing the Nirguna and Saguna Lord although the aura of Divinity emanates from his verses. Rama-katha in Kavitavali is brief. An outline of the story contained in each Kanda is given in this book before commencing poems of the Kanda in Kavitavali. Reference to the detailed events recorded in Ramacharitmanasa may be required to fully appreciate the context of verses in Kavitavali.

According to the Hindu concept, the four aims of life are: (i) artha- acquiring the means of livelihood; (ii) kama-living with pleasure; (iii) dharma-living righteously; and (iv) moksha-attaining freedom from subsequent births. Tulsi commends devotion to the Feet of Rama to be a superior aim of life. 'I do not seek artha, kama, dharma or moksha, I only seek devotion in Rama's Feet in future births' (RCM, II.204). Rama-guna-gatha (singing of the Glory of the Qualities of Rama), is an essential component of bhakti-sadhana (discipline of devotion). It is stated in Ramacharitmanasa that simply by Rama-guna-gatha one can cross the Ocean of life (RCM, VII.103A). In some verses of part II, Tulsi recalls the anguish and sufferings of his childhood and early life. He attributes the eminence he later attained to the faith and peace he derived from Rama- guna-gatha.

Kavitavali is particularly suited to young boys and girls who are on the threshold of life's exciting journey as an introduction to the Deeds of Rama and an awareness of noble ideals in life to firm their resolve to contribute towards a better world.

Kavitavali is one of the major works of Go swami Tulsidas. It is also a work of special significance in depicting Tulsi's religious thought. In Ramacharitmanasa, Tulsidas the Apostle of the Lord recorded the story of Earthly Deeds of the Divine Visitor in the enthralling form of Ram a with deep reverence and inspired devotion. While Ramacharitmanasa represents the magnum opus of Tulsi's genius, the illustrious saint restrained the scintillating beauty of his art in his greatest work to enable him to narrate events of his Lord's earthly life, illustrating the simplicity, gentility and warmth of the Lord's Compassionate Mercy. It was the inevitable outcome of Tulsi's matchless genius rather than his own intent, which transformed Ramacharitmanasa into an immortal literary work despite his own resolution to convey the Lord's message to the common man in simplest words.

It is really in other works of Goswami Tulsidas that we find the poet- saint dazzling with the brilliance of his poetic art and iridescent with the aura of totality of his own devotion to his Beloved Lord Rama. Having fulfilled his mission of transforming the epical story of Rama into a Holy Scripture, the poet-saint yearned to fulfil the yearnings of his own heart by singing unrestrainedly of his beloved Rama and of His Divine Glory. Tulsi longed to sing of his love for Rama as no devotee of the Lord had ever sung before. He fulfilled this desire in Gitavali in which he has sung of the Form and Earthly Deeds of Rama in bliss filled rapture. Another craving of Tulsi's heart was steadfast and unswerving imploration of Divine Mercy. To fulfil this yearning the great poet-saint composed Vinaya Patrika which was his own Letter of Plaint addressed to his beloved Lord. Thus while the great devotee of Rama holds his readers spellbound with the expression of sheer abandon of rapture of love emanating from Rama-katha in Gitavali, he enthralls their hearts with reverent awe in Rama-guna-gatha or Narration of the Glory of Rama in Vinaya Patrika and one is amazed at the compelling urgency of his longings for Divine Mercy contained in his verses.

Kavitavali is a transition in objective between Gitavali and Vinaya Patrika and the work is of special significance in an analysis of the religious standpoint of Goswami Tulsidas. It represents the sum and substance of the poet-saint's perspective of dharma in which Rama-katha forms the base of devotion and Rama-guna-gatha the rapture which emanates form invocation of Divine Beatitude. Kavitavali, which commences with Rama-katha and concludes with Rama-guna-gatha is therefore a complete exposition of Tulsi's religious philosophy and, in this respect, pre-eminent amongst his literary works.

Shri S.P. Bahadur was born on 19th July 1926. He studied at the La Marlinere College, Lucknow, University of Lucknow and Roorkee. He visited Australia under Columbo Plan and retired as Chief Engineer, Irrigation Department, Uttar Pradesh in 1984. Born in a family devoted to the Rama tradition he received blessings and guidance in studies of Rama theology from his maternal uncle Mahatma Anjaninandan Sharan of Ayodhya, himself the author of exhaustive commentaries in Hindi of all literary works of Tulsidas published by Gita Press.

PART I
Rama-Katha - Glory of the Deeds of Rama 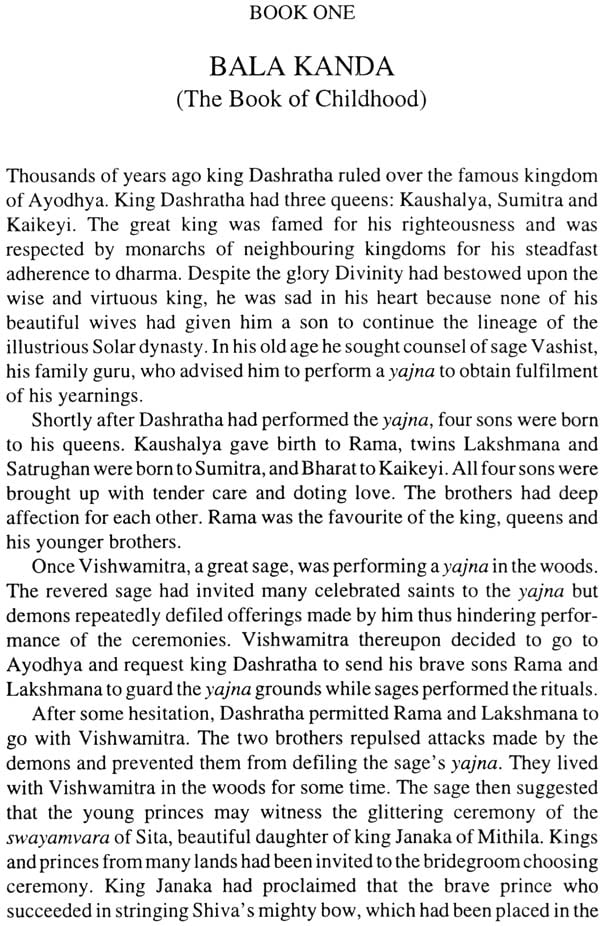 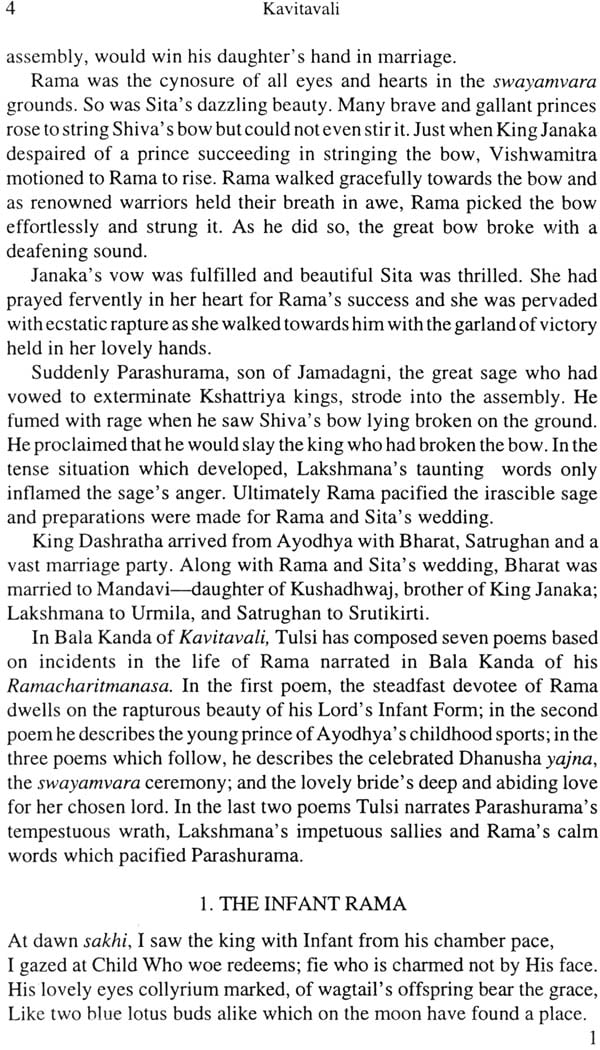 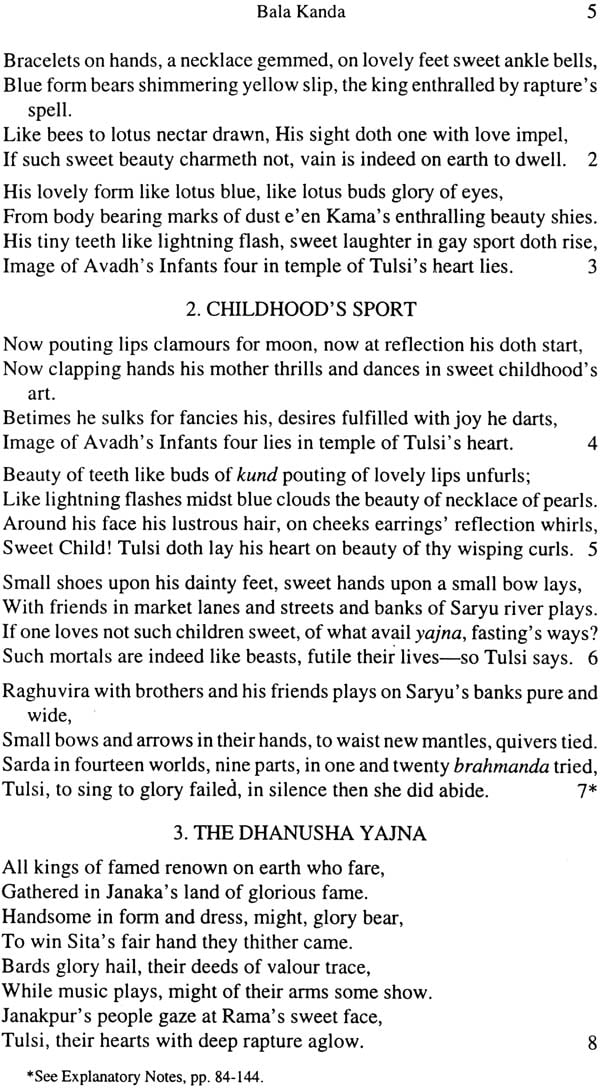 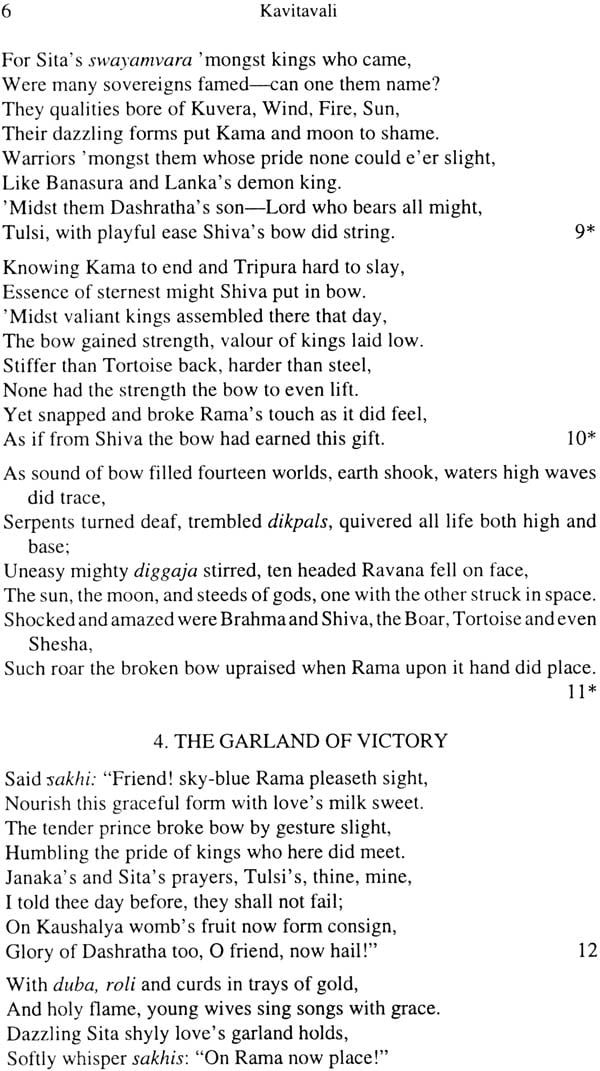 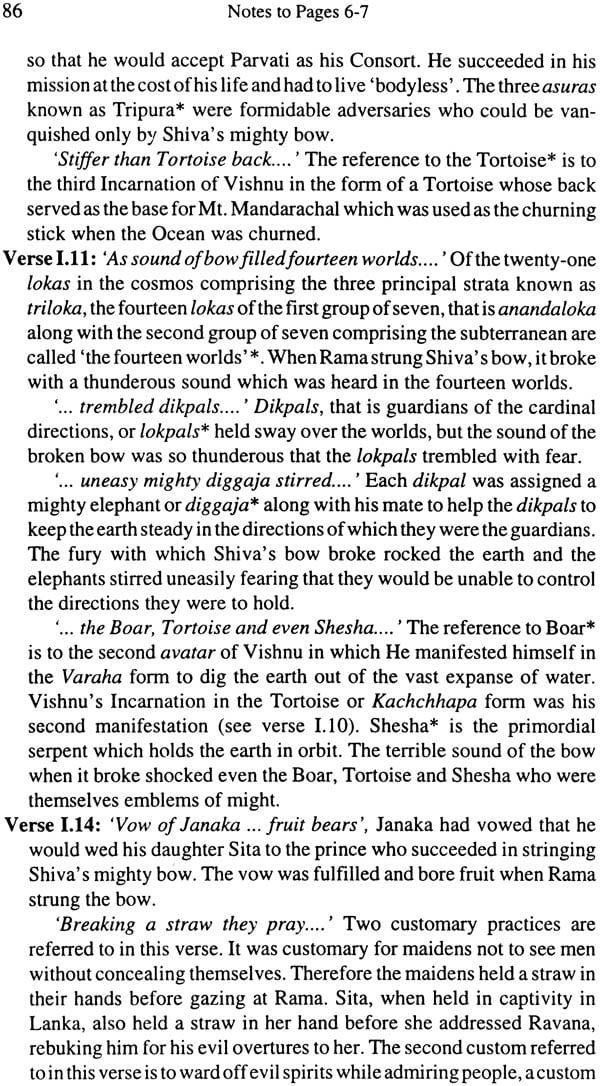 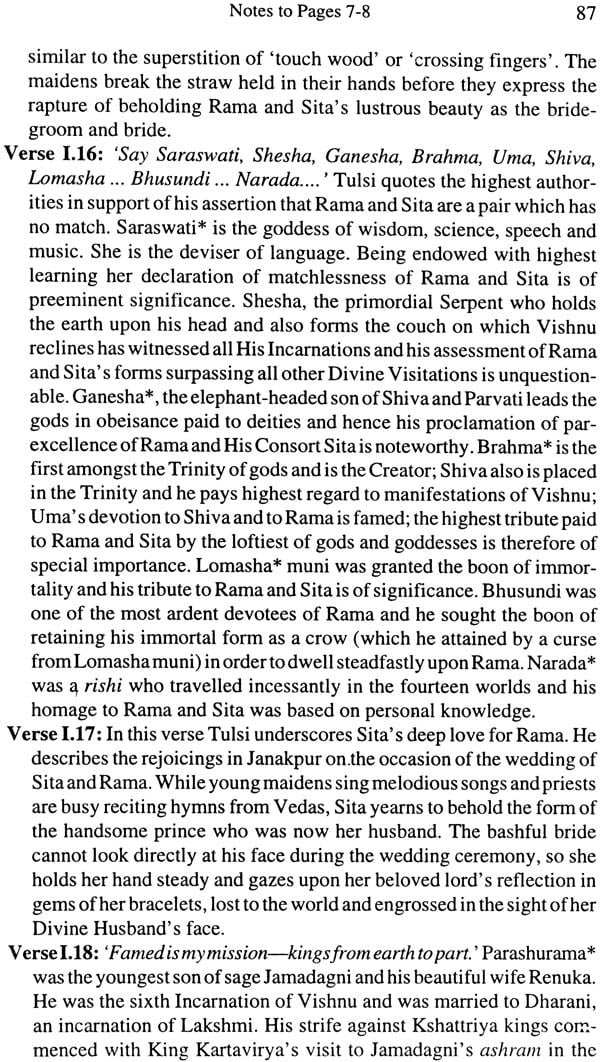 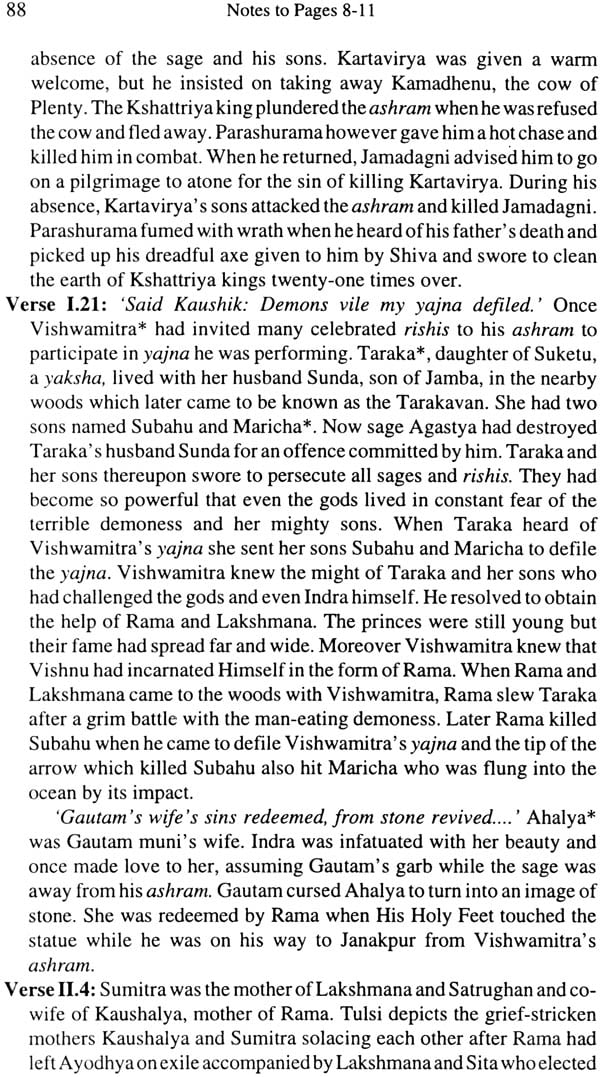 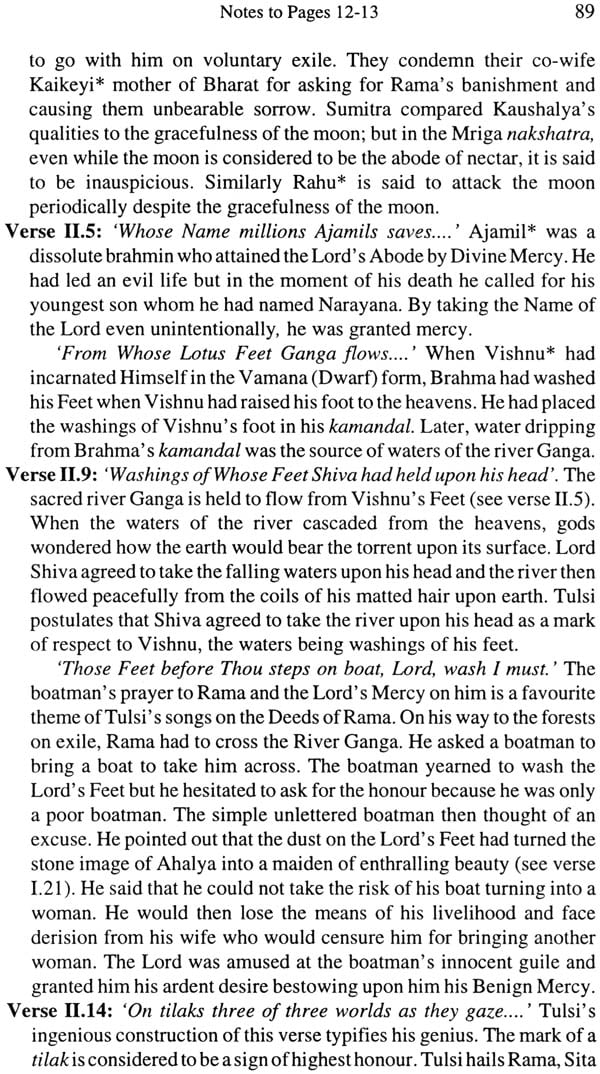 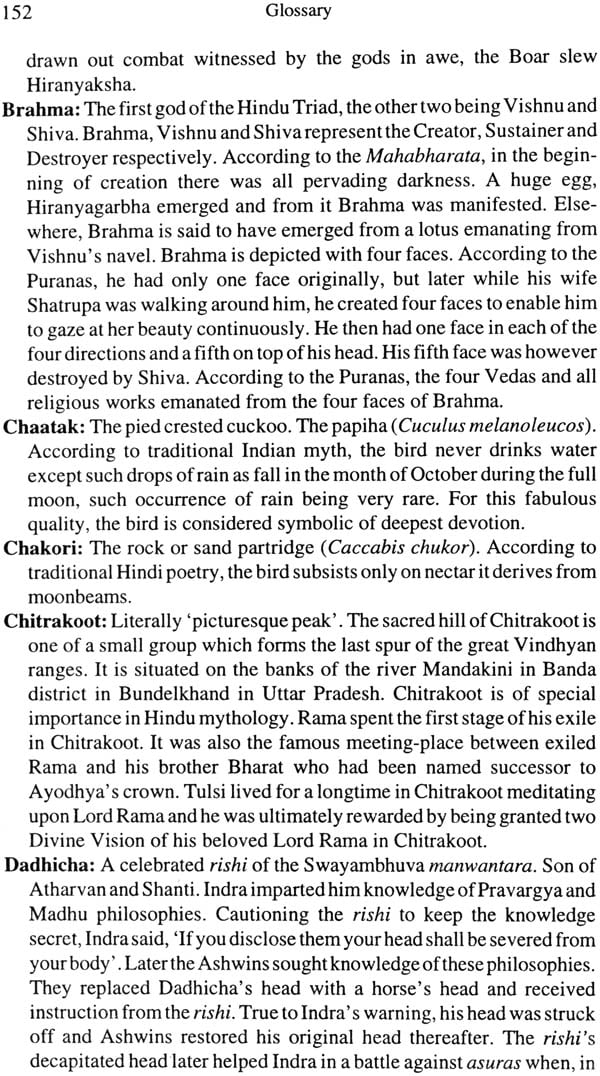 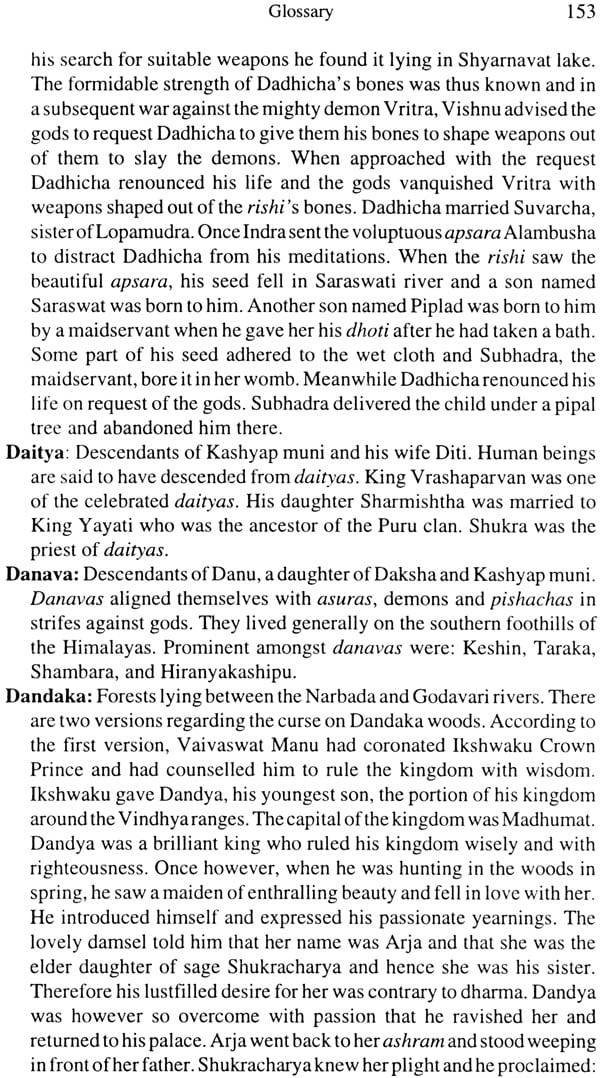 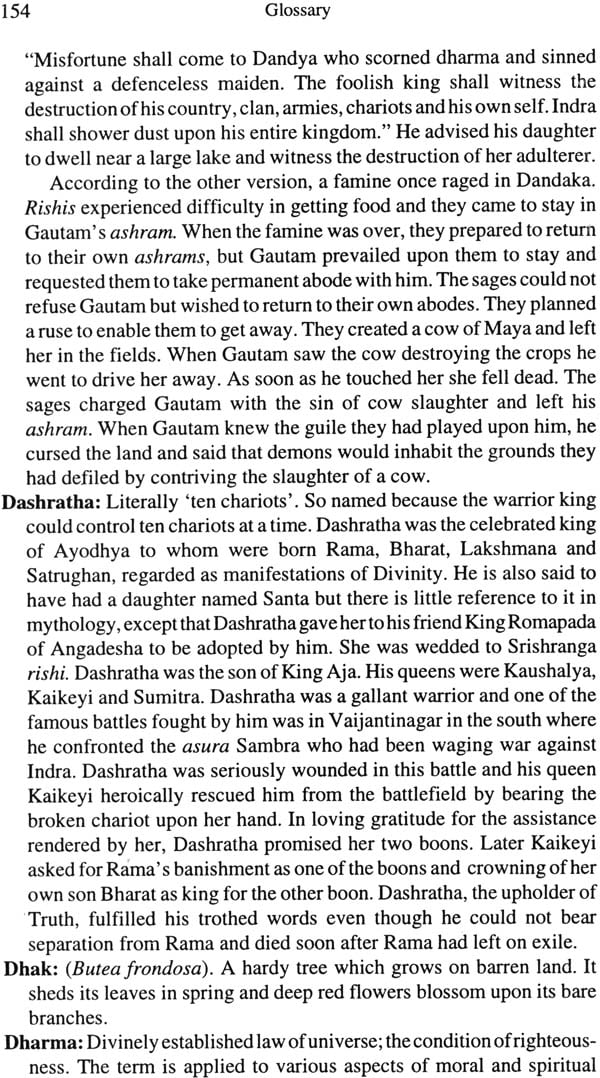 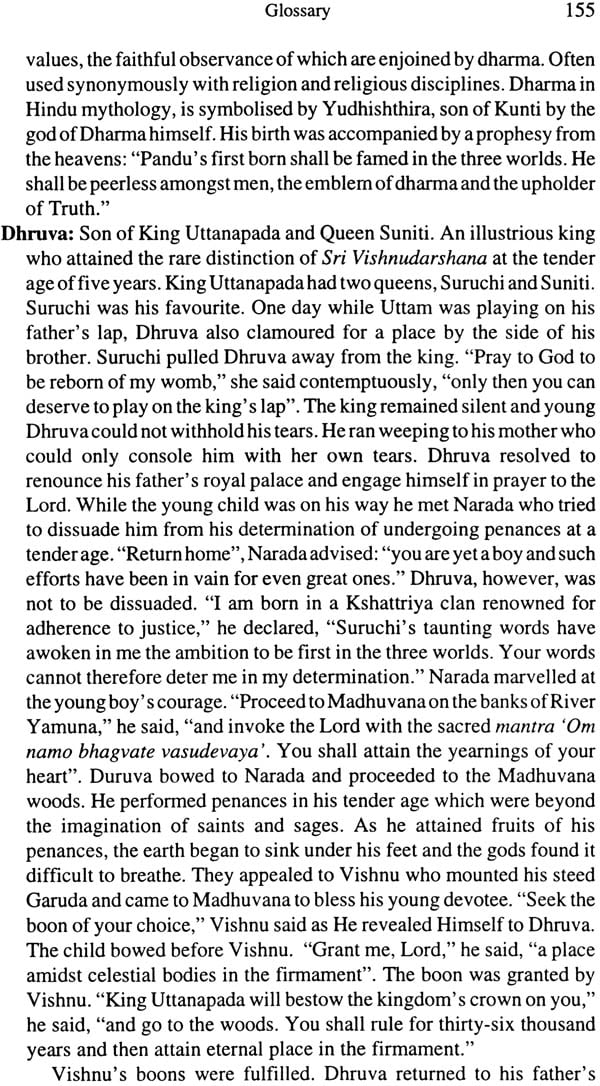 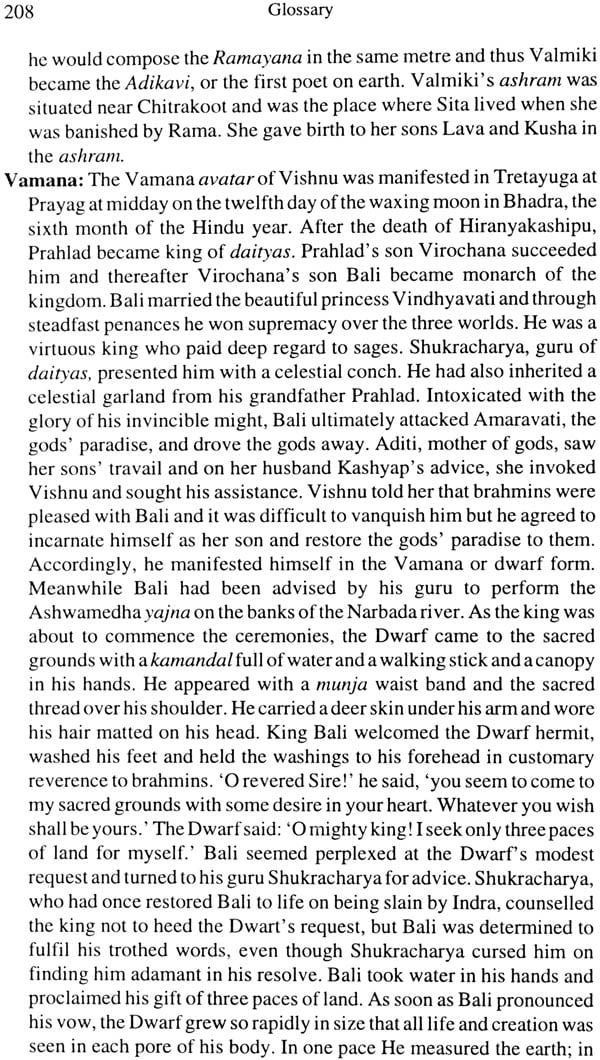 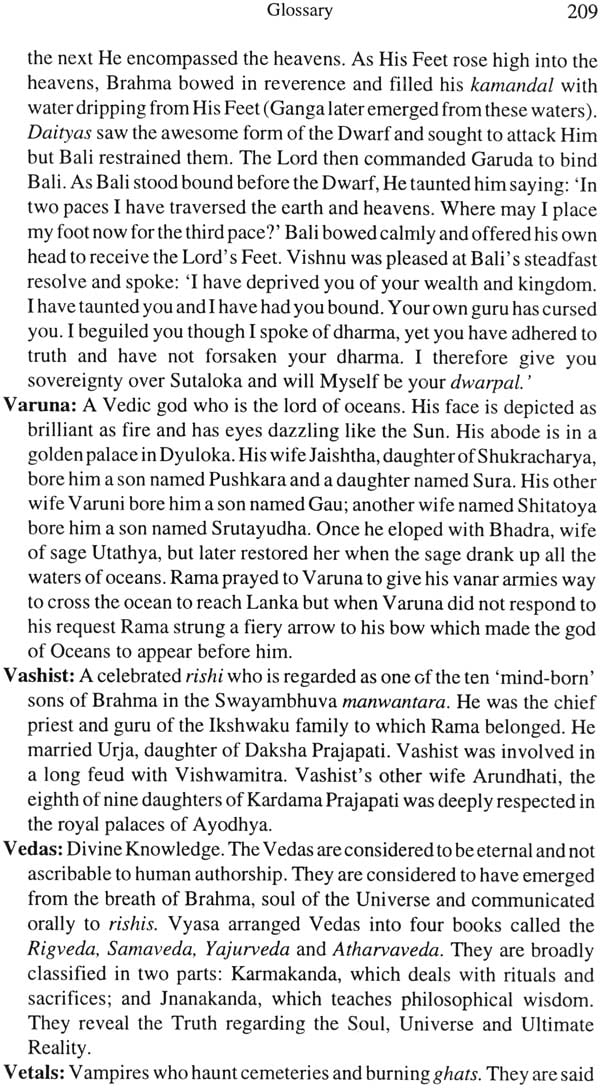 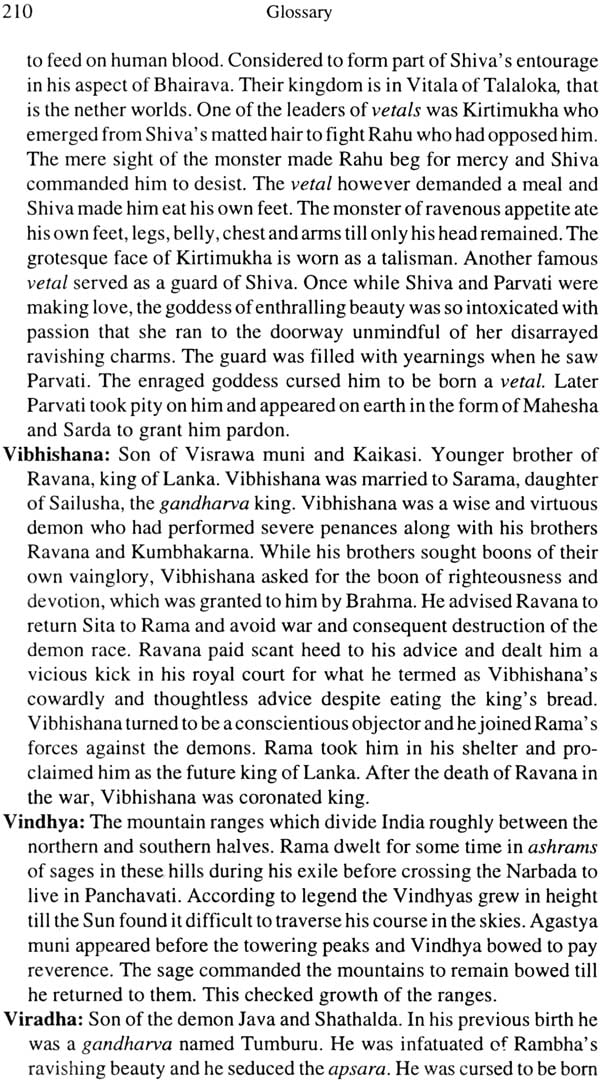 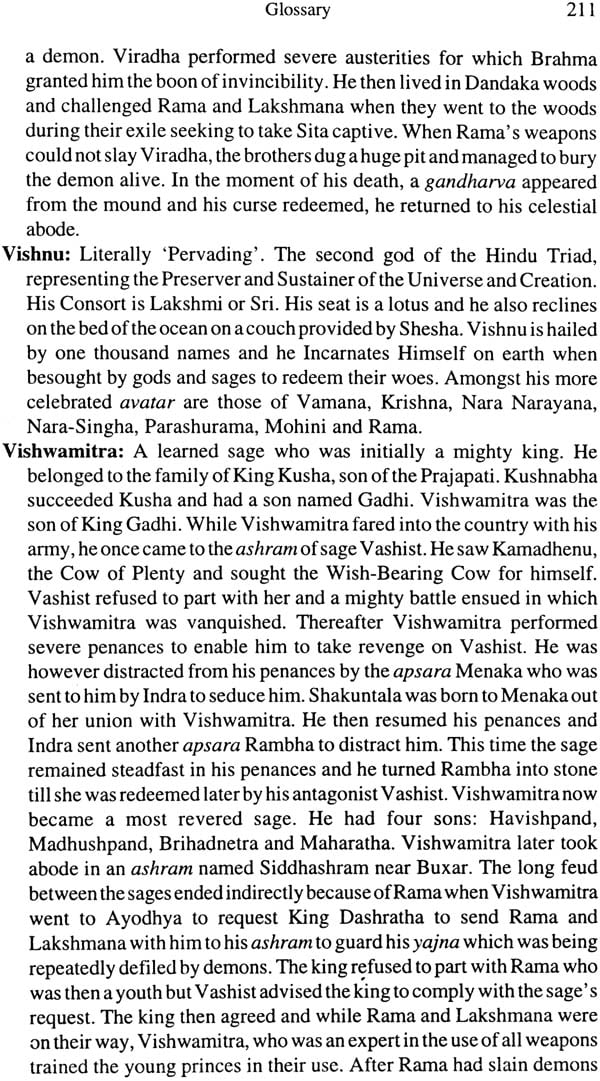 Minor Works (Vol. VI from Complete Works of Goswami Tulsidas)
By Trans into English by S.P. Bahadur
$24
FREE Delivery
$32  (25% off)

Minor Works (Vol. VI from Complete Works of Goswami Tulsidas)
By Trans into English by S.P. Bahadur
$24
FREE Delivery
$32  (25% off)
Add a review
Have A Question