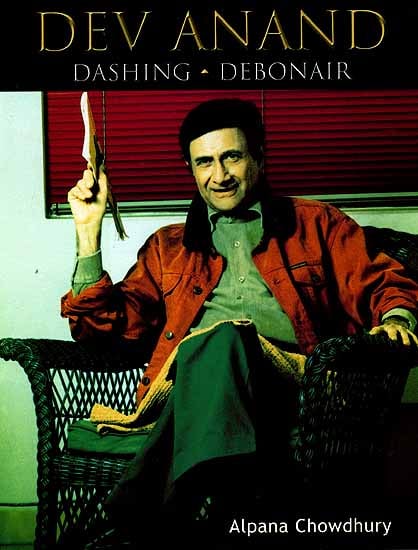 At eighty plus, he is the youngest star of the Hindi film industry, bringing to his work the youthful enthusiasm with which he stepped foot here in 1943. Sixty years down the line, Dev Anand continues to be the eternal optimist, doing what he loves best: donning the pancake to face the camera, writing stories and making films on subjects he passionately believes in. he is as charged today as when he first stood under the arclights for Prabhat Studios' Hum Ek Hain.

Alpana Chowdhury former assistant editor with Evening News of India and features editor with Filmfare magazine. A freelance writer with some publications like Inside Outside, Verve, The Time of India and The Indian Express. She has authored Madhubala: Masti and Magic for Rupa.

Incorrigible romantics cannot help being hopelessly in love with the most stylish, debonair star of all times, Dev Anand. Even today when we watch him plead earnestly, Abhi na jao chod kar, ke dil abhi bhara nahin, time stands still while we allow ourselves to succumb to his irresistible charm. A charm that has remained undiminished over the years. In recent times, his films may not be faring too well at the hustings but this has not affected his popularity as a star as was very evident at the 2003 National Awards function where he was given the prestigious Dada Saheb Phalke award. His jaunty walk up to the podium was accompanied by a resounding applause as everyone stood up spontaneously to put their hands together for his buoyant spirit. A sedate event got converted into one of genuine celebration when his contribution to Hindi cinema was given its rightful due.

It is a contribution he has made not just as an actor. Within a few years of stepping into the film industry, Anand had the courage to start his own production house, without any parental support. Epitomising the enterprising spirit of the city where he came to earn a living, Anand launched Navketan in partnership with his elder brother Chetan Anand. And over the years his production house has discovered talents of various hues. Directors, cameramen, music composers, story writers, lyricists, actors, actressesa phenomenal body of creative persons have emerged from the portals of Navketan. Interestingly, the late producer Yash Johar, was production controller with Navketan for nine years, Irrespective of its fluctuating fortunes, Anand has kept his company going, paying salaries to his staff and regularly producing films. No mean achievement this when you consider how bigger production houses have floundered and closed shop. From producing Afsar in 1950 to Love At Time Square in 2003, it's been a long, eventful journey, spanning more than five decades. Five very fruitful decades that have introduced to the film industry talent as diverse as Waheeda Rehman and Zeenat Aman, and given film Buffs eternally-entertaining films like Baazi, Kaala Paani, Kaala Bazaar, Hum Dono, Guide, Hare Rama Hare Krishnaand Jewel Thief. to slaves of melody Anand's films are a source of endless hours of listening pleasure. S. D. Burman composed some of his most memorable numbers for him and songs like Khoya khoya chand and Dil Ka bhavar Karen pukar still create magic, transporting us to idyllic times when romance ruled.

It has been a journey that has traversed many a road, not all of which have been smooth. But the ever-optimistic actor-producer-director has taken the bumps in his stride, never allowing obstacles to block his way. His brothers parted company with him, deaths of near and dear ones lift him momentarily shattered, heroines he groomed left him for greener pastures, his films flopped at the box-office, but undeterred, Dev Anand has continued doing what he loves best-donning the pancake to face the camera, writing stories and making films on subjects he passionately believes in.

It has been a journey that has coincided with crucial years of the history of our country. From British rule, through Independence and its accompanying horrors of Partition, through decades of Congress rule, the declaration of Emergency, the confusion thereafter and all the turmoil of changing governments-Anand has seen it all. He is a strong political animal with very definite views on the state of affairs and was one of the first film actors to dare taking an active part in politics, defying the system at a time when even fundamental rights of citizens had been suspended.

Gutsy, individualistic, Dev Anand believes in following his inner voice, irrespective of the outcome. At eighty-plus, he is the youngest star of the Hindi film firmament, bringing to his work the same enthusiasm with which he left the secure environs of his home to pursue higher studies in an alien city, the enthusiasm with which he boarded the train at Lahore to come to an unknown city like Bombay to make a name in the glamorous world of films. He is as charged today as when he first faced the camera for Prabhat Studios' Hum Ek Hain. With never a moment of doubt, Anand dares on, making films on subjects that move him, sure that one day the audience will respond with like-minded enthusiasm.