In September 2015, ten of the world's leading luminaries noted for exploring the mysterious compound dimethyltryptamine (DMT) gathered, along with a number of multidisciplinary discussants, in the United Kingdom at Tyringham Hall, the spectacular home of Anton Bilton, property developer and patron of consciousness research projects. Over three days, these open-minded explorers discussed the notion of entheogenic plant sentience and the role of DMT as a possible conduit between Spirit and Matter.

This edited collection of presentations and discussions describes a wide spectrum of theories that have arisen within this field, ranging from the Simulation Hypothesis and the Multidimensional Universe to the possibility that DMT had ancient extraterrestrial origins. Others suggest that the chemical has played a prominent role in our cultural and religious evolution, from Paleolithic rock art, the Aboriginal Dreamtime, and the prophetic vision of the Old Testament through to the futuristic worlds of modern science-fiction films. What has emerged from this seminal meeting of minds is overwhelming evidence that DMT is somehow integral to the mediation between different states of consciousness, possibly even between life and death itself and, as a result, is worthy of rigorous investigation.

Through staging this event, the Tyringham Initiative was born, a world-class think tank or "Modern Mystery School" that believes the synthesis of Science and Spirit, and even direct experience of the divine, to be fundamental to reshaping our worldview. At a time when multiple scientific disciplines, from quantum physics to neuroscience, are converging on the core truth and mystic vision of the Perennial Philosophy-that Consciousness may indeed be primary and not secondary to Matter-the role played by a compound such as DMT seems ever more crucial to explore.

Could this next Copernican Shift in our understanding of Consciousness be the pivotal factor in helping humanity to reenvision its role in the universe and thereby take the necessary steps to make our political, social, technological, and economic systems synergistic with ecological parameters? And could our understanding of the role played by DMT prove to be the key to unlocking the great mystery of Consciousness itself? Perhaps the pages that follow will prove to be the start of us finding out.

DMT is a simple organic molecule present in an extremely wide range of animals and probably all plants, though curiously not fungus, which in true mycelial style has its own version: 4-HO-DMT. That DMT is also naturally occurring in humans is no doubt part of why it is so often experientially considered to be the strongest and strangest of all psychedelics, delivering half of all high-dose users to new yet curiously familiar alien worlds where sentient nonhuman beings await to greet them: "Welcome back, we missed you." Few experiencing these phenomena report anything less than a world seeming more real than this one. Science explores, charts, navigates, discovers, and increasingly comprehends the physical world both macro and micro. It pushes the limits of outer space, yet is asleep at the wheel of our outward-thrusting vehicle, giving scant regard to mapping inner space, which is both within the universe and our personal container of it. And yet what could be a more important scientific research question in a materialistic world than locating, verifying, and communicating with beings apparently far more intelligent and knowledgeable than we are? Given that 100 million dollars has just been provided to boost the Search for Extraterrestrial Intelligence Research Project, also known as SETI, wouldn't we expect any project that already has half its researchers reporting positive communications equally if not more worthy of investigation? But where are all the research grants, the scientific papers, the scientists and experts? Ah, there you are! All ten of you, welcome back, we missed you! The question of DMT beings, of plant sentience, of interspecies communication, of discarnate consciousness, of perhaps even dialoguing with the divine-these are surely some of the most important of all research questions. They cut to the heart of the nature of reality itself. The precise tool for this research has been available for more than fifty years, but the academy has left it in the pencil jar in the secretary's office, hiding in plain sight.

So what steps should be made on our road to discovery? What is the role of DMT in plant-human co-evolution, and what is its origin? Can we verify this other world and these other beings? Is the DMT world just delusional? Is our imagination more tricksy and infinite than we give it credit for ... or are these beings somehow real? If real, then what are their intentions, and what is our relationship to them? Is it time to establish an interdimehsional embassy or to barricade our minds against "the other"? Or are we just finding a new way to dialogue with our (higher?) self? In any case, what can be learned from the beings and from DMT and our study of it, anthropologically, culturally, psychologically, linguistically, pharmacologically, medically, evolutionarily, heuristically, and epistemologically? Or does all this exploration just generate more questions than answers, a chimerical rabbit hole more labyrinthine than our crenulated brain will allow us to fathom and more obscure than dark matter? Maybe we will find out.

Entities, gods, aliens-they're certainly not new to us humans. For millennia man has been spoken to by beings, and our major religions, misguided or not, are based on these communions. Today we are technologically advanced and can examine these visitations with a greater intensity than our ancestors. We can create experiments that provoke the communion, allowing us to see correlations in experiences, to gather evidence, to ask the entities for answers, to access their realms, and to act on their advice. To me this is the most important work we can do. Spending billions with NASA in a search for extraterrestrial life seems almost wasteful when we can spend a fraction of that and experience alternate sentient presences through consciousness-expanding practices as our ancestors did.

For what is life? We deem a biological and material body as imperative. Yet our conscious self may exist way beyond its occupation of our body. In one guise or another, most people believe this to be true. One night, while traveling in the astral and provoked by a particularly sacred moment of a ceremony, words of humble gratitude spontaneously came out of my mouth: "Thank you for my existence." It shocked me. Not my life, but my existence; and I saw the difference. I've had many entity experiences. The first was at a very sad and difficult stage in my life when I was fifteen years old. It arrived, unprovoked, midmorning during a school break, and in a Saul-on- the-road-to-Damascus way, it was the most profound experience of my life. It triggered my interest in these messengers from the gods, arid since then I've spent much of my time outside my business and family issues seeking ways to make contact with them.

Sometimes they're benign, sometimes apathetic, and sometimes malevolent. But perception is all, and frequently what one perceives to be demonic is also one's greatest teacher. To fear less and be fear- less seems to be the key to understanding.

An example of this was when a monstrous, horned, ten-foot-tall demon screamed down at me, his huge muscles rippling under his red and leathery skin: "You, you ignorant humans, you really think it goes you, then God. You're so bloody arrogant. Let me tell you, just as an ant is a god to a single-cell amoeba, and as a dog is a god to an ant, and as a man is a god to a dog, then it goes on in many, many more layers from man before one reaches the Godhead. The ant can destroy the amoeba; the dog can piss all over the ant's nest; the man can cut the dog's throat; and I can murder you. In that order, it's so simple. And yes, at the end there is the Cosmic Mind, pure consciousness, the "God" of everything, and we are all One, but between that and you there are layers and layers of what you call gods, and I'm just one of those. The ancient Egyptians, the Greeks, the Romans, all pagans, they had it right in their multigod beliefs but you, you've all gone way wrong with your single God theory. Now let me show you what I do as archdestroyer."

And he whisked me off my feet by the scruff of the neck and flew me away through a sky of planets to see the Shiva-esque chaos he had wreaked. Wowzers! An introduction to the concept of layering and one that not only felt more real than real but also tweaked the intuitive truth button that lies embedded in one's gut. Layering: differing levels of intelligent beings way more evolved than us. Gods! Not God. Layers of gods. Some more powerful than others. All more powerful than us. Yet all, somehow, eventually or in the ever-present now, at one with the cosmic mind of all.

What is it with these demon teachers and their sermons that makes them feel so real?

Their perceived malevolence and our associated fear response seem purposefully designed to jolt one out of ego-based judgments and help one move into the fearless witness state.

What is it with all entity encounters that makes the meeting so profound?

Whether it's a prophetic vision, a near-death experience, an alien abduction, or an investigatory plant medicine/psychedelic trip, the interaction with an alternate sentient presence, an entity, always knocks one's socks off.

From tiny flying fairy-like nurses through translucent angels, geometric light beings, two-dimensional faceless plastic figures, snakes, vines, jaguars, alien Greys, talking play-school toys, machine elves, small-mouth huge-forehead humanoids, sexy succubi, coral-like plants, skeletal giants, burning blue light-saber flames, to the raging fleshy demon encountered above, these entities are purposeful, sentient, and intelligent. They know what they're doing. In my view the aliens and entities we see today are the gods of out ancestors, and it's solely our greater understanding of technology that makes the difference, as the technology of today is the magic of past years. Just as the conquistadors were perceived as gods by the Indians, so all descriptions of gods and aliens lie solely in their perceived omniscience by their observer. If they're perceived as omniscient, then they're a god; if there's any notion of possible vulnerability, then they're an alien. We could spend all day arguing about whether these entities exist. They have been as real to me as I am to myself while sitting here writing this introduction. Of course, perhaps that sense of my own reality might well be misplaced, but that's for later in this book, when we discuss ideas on the nature o subjective reality and our own place in it. 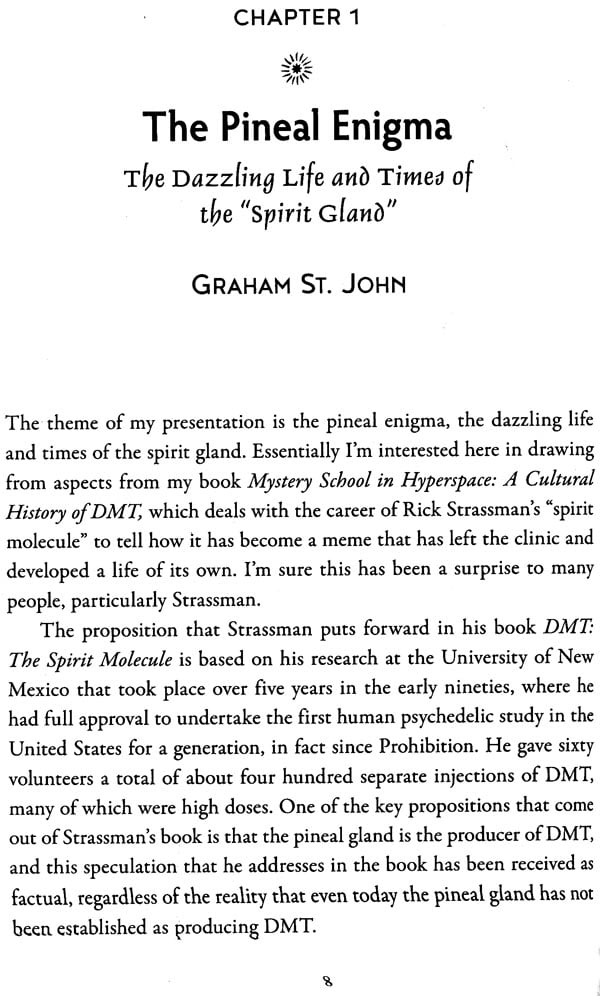 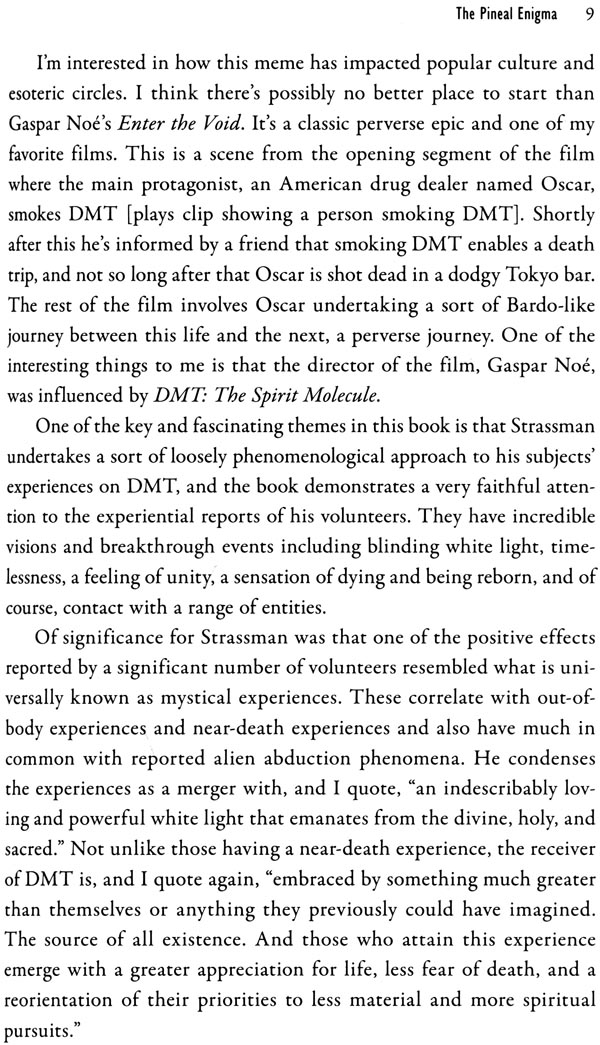 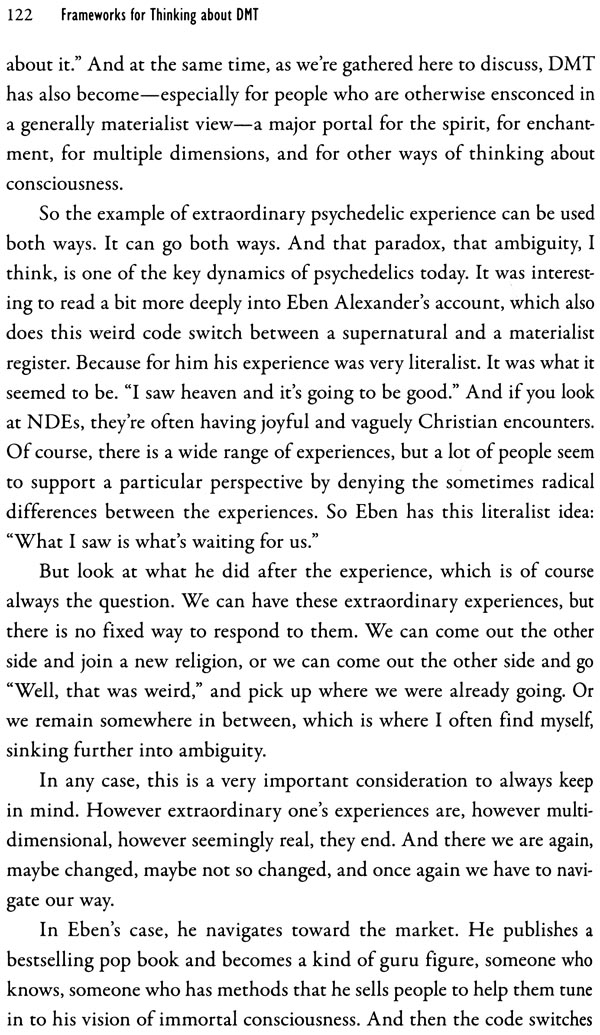 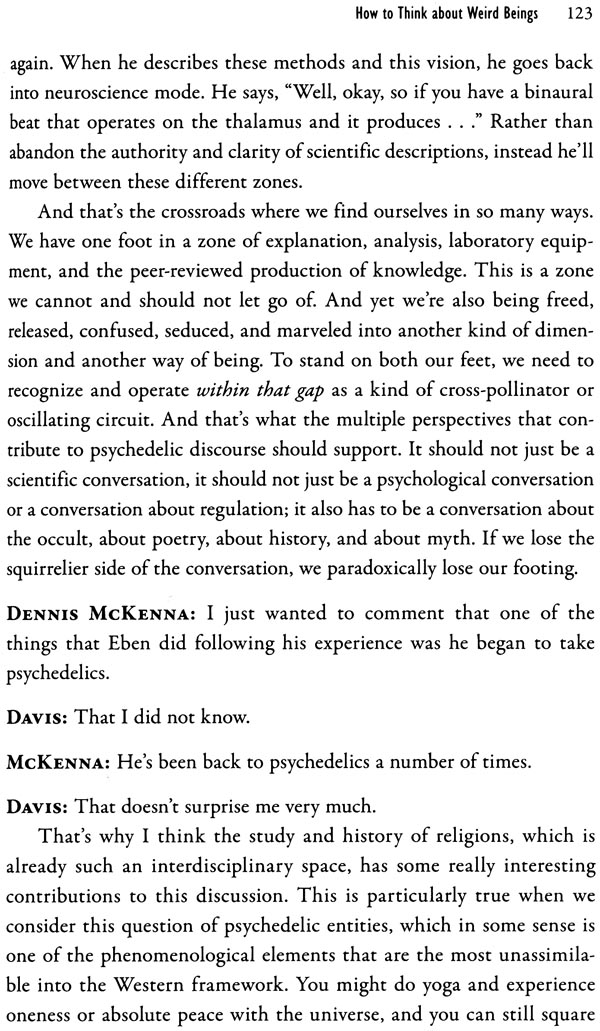 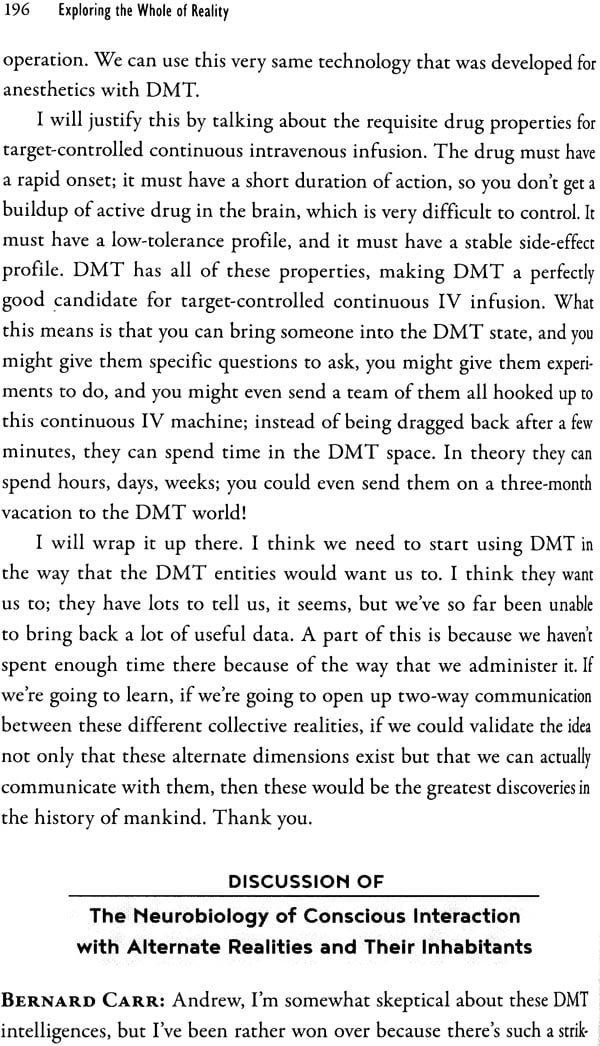 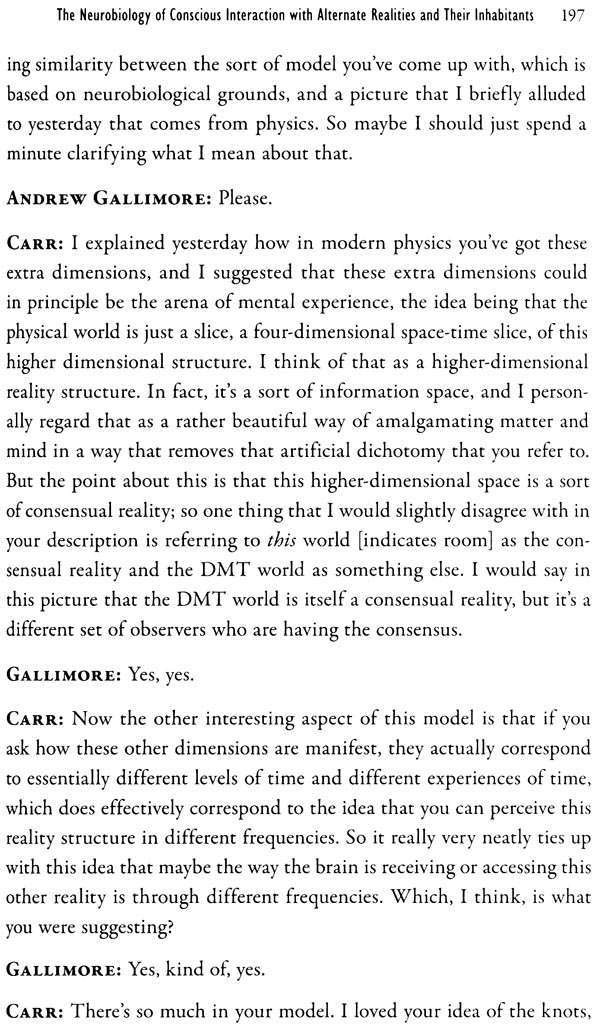 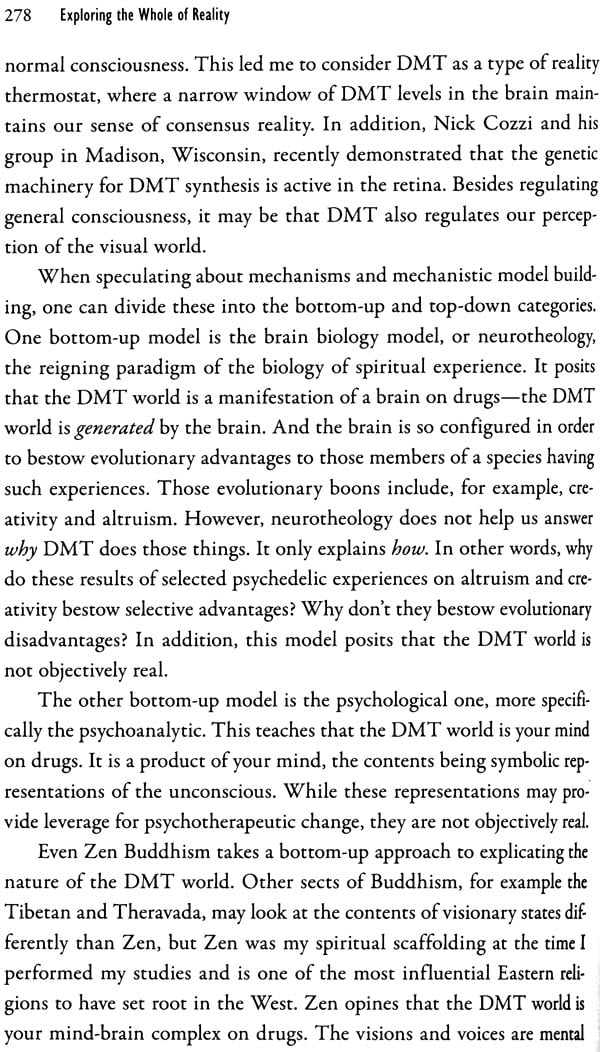 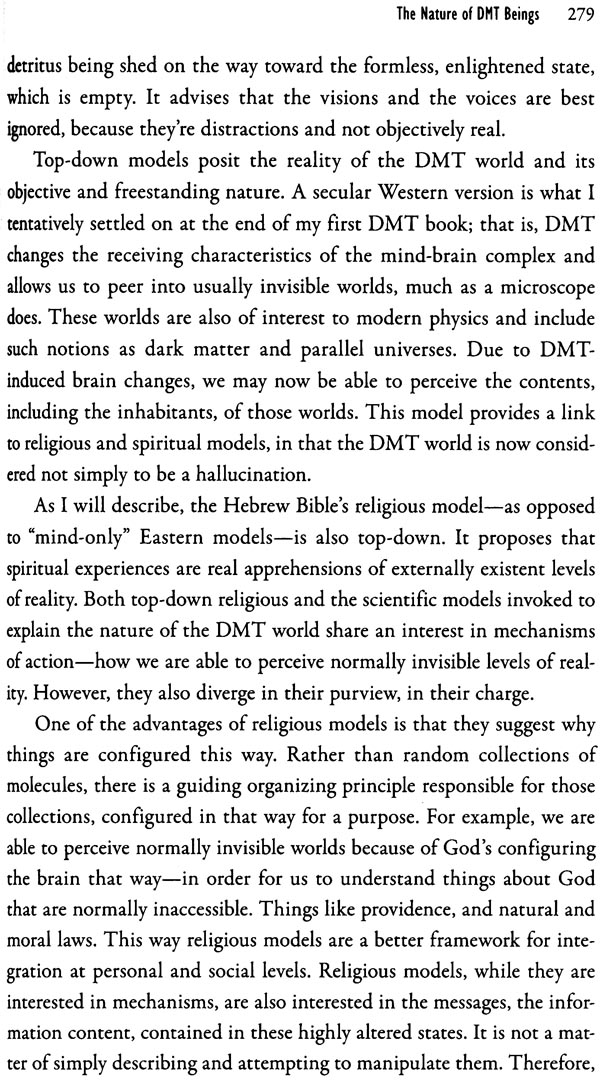 DMT: The Spirit Molecule (A Doctor's Revolutionary Research into the Biology of Near-Death and Mystical Experienes)
By Rick Strassman
$29
FREE Delivery Spiritual Healing for Cancer Through Chakras(A Guide to Understand Chakras and Cosmic body and Implementation of Chakras Healing For Cancer)
By Dr.Pooja Sabharwal
$12.50
Best Seller