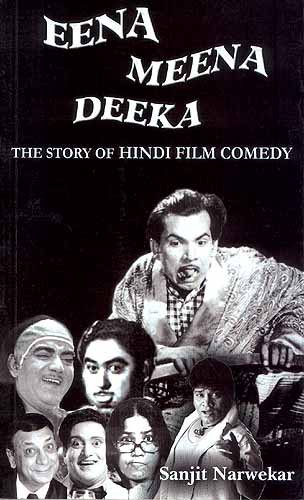 EENA MEENA DEEKA is a fascinating glimpse into the world of Indian screen comedy, peopled by known, as well as once-important but now-forgotten comedians, who helped evolve the genre from its first slapstick beginnings to the 'polite' comedies of manners aimed at the urban middle-class. The comedian or vidusbak has always been an indispensable aspect of the Indian dramatic tradition. Comedy or hasya is one of the nine 'rasas' as defined in Bharatmuni's Natyashastra. It was, therefore, natural for Indian cinema to readily imbibe this aspect of the dramatic tradition, with the first Indian comedy, a single-reeler directed by Dadasaheb Phalke, making it's appearance as early as 1913.

The book traces the evolution of the genre from Dhirendranath Ganguly, the first recognised 'filmmaker-comedian' who made comedies on regular basis to the true 'godfather' of the Indian comic art Noor Mohammed 'Charlie', who, along with his contemporaries Dixit, Ghory and Kesari, set the comic pace through much of the 1930s and '40s and much of what was to follow.

The 1950s and '60s were truly the golden era of Indian film comedy - with Johnny Walker's antics, Jagdeep's rolling eyes, Johar's sardonic wit, Om Prakash's miserlinnes, Radhakrishnen's shrill high - pitched comebacks, Mukri's playing-to-the-gallery the list is endless! The icing on the comic cake was, of course, Kishore Kumar who sacrificed his comic talent to emerge as a star-singer and the inimitable Mehmood whose penchant for the bitter-sweet has made him an unforgettable icon.

Through the 1970s and '80s had its comic stars in Asrani and Painatal, these were the decades when the director reigned supreme. The book takes a close look at the urban middle-class comedies of Hrishikesh Mukherjee and Basu Chatterji as also those of the New Wave comedies by directors like Kundan Shah and Pradip Krishan. This was also when the comedian took a backseat to the leading man who was romancer-villain-comedian all rolled into once!

The hero-playing-comedian is a trend as old as cinema: Motilal, Raj Kapoor, Shammi Kapoor, Dilip Kumar and finally, Amitabh Bachchan. The fading years of the century saw the emergence of the star as comedian when the hero- from Salma Khan to Sunjay Dutt to Govinda - preferred to play the fool under the direction of David Dhawan. Nonetheless, as original talent like Johnny Lever emerged as a top comedian in spite of such stiff competition.

ENNA MEENA DEEKA takes a panoramic look at all these players, the films and their directors who made it possible for us to hold on it our sanity in this world on the brink of extinction.

From the Back of theBook:

Mehmood uses language to great effect. In Pyar Kiye Jaa he uses a whole range of strange onomatopoeic sounds like "Toning toning  wao wao  kud kud kach kach kach " to recreate the frightening mood of the cemetery. In both Gumman and Padason he comes up with a hilarious, if somewhat politically incorrect, caricature of the lungi-clad "South Indian" using the right Hyderabadi and Tamilian dictions and mannerisms. For a north Indian to make such a fine separation is an achievement in itself.

SANJIT NARWEKAR is a National Award winning author and documentary filmmaker who has written and lectured an Indian cinema since 1970. He has served on several juries and several committees and has been a member of the Film Advisory Board. He has also delivered talks and hosted interviews and magazine programmes an All India Radio and Doordarshan. He has written and edited more than two dozen books on Indian cinema, including V.Shantaram: The Legacy of the Royal Lotus and Dilip Kumar: The Last Emperor.