Forts and Palaces of India

Dr. Sahai is an eminent photographer. His work has featured in Photography Year Books and prominent magazines like London Magazine, Amateur Photographer, Practical Photography, SLR Camera etc. He writes regularly on subjects of art and architecture for Indian and foreign journals.

Dr. Sahai studied English literature at the universities of Lucknow and London. As a British Council scholar, he worked on the plays of Harold Pinter. His dissertation was published by the University of Salzburg, Austria. He is a Reader of English at Motilal Nehru College, Delhi University.

This book is a homage to the trememdous architectural heritage of India. The building of forts and palaces has always been regarded as a symbol of dynastic pride. These grand structures witnessed the rise and fall of many a great kingdom in medieval India.

There are hundreds of forts in different parts of the country. A vast number of these forts survive in sheer ruins, rendering it extremely difficult to identify the structures within. Some of these magnificent forts stand abandoned, surrounded by a wilderness and no villages or roads providing any clue to the identity of their builders. The fort of Garhkundar in Madhya Pradesh is surrounded by dry, uncultivated land and few villages around it. The inaccessibility of many forts makes it difficult for visitors to reach there. The fort of Kalinjar, also in Madhya Pradesh, requires immense effort to climb the mountain where the Chandelas had built this massive fort. Here was killed Sher Shah, just when he had conquered it. Chittaurgarh and Ranthambore, Jaisalmer and Mehrangarh, Daulatabad and Vijaynagara - have all been amongst the most prestigious forts to witness events of immense historical significance. Some of these forts are still under the control of the Indian army. The fort in Allahabad is completely closed to visitors. At Agra, visitors aren't allowed near the Delhi Gate of the fort. Shahjahan's Red Fort in Delhi has only recently been vacated by the army.

Dr. Sahai has selected only a few of these magnificent forts and palaces for the modern reader. The information provided is based on the latest research work on these spectacular monuments, some of which were built long before the founding of the Delhi Sultanate in the 13th century CE. The present book provides the best of scholarship, and aims at creating a greater awareness about the preservation of our tremendous architectural heritage.

The need for security and defence of human settlements and I kingdoms has, since the earliest times, led to the building of ?protective boundaries, strong fortifications and forts big and small, where the treasures of the state were kept safely, providing at the same time a well defended haven to the ruler and his family. The instinctive human desire to decorate one?s dwellings and to embellish these with objects of luxury to match their social status, gradually transformed these rudimentary, functional structures into glorious palaces. The history of forts and palaces in India follows the socio- economic developments since ancient times. The ruins of the major cities of the lndus?Valley like Mohenjon-Daro and Harappa clearly indicate the importance of a well-knit housing complex dotted with some large houses, indicating the embryonic form of the forts and palaces.

Summing up the wisdom of centuries of work preceding his times, Kautilya, author of The Arthashastra, stipulates the building of the capital, ?in the center of the country. The site (or the capital) shall be chosen by experts in the science of building and be naturally best fitted for the purpose- (for example) at the confluence of rivers or near a perennial lake; near an artificial (round, rectangular or square in shape, depending on the nature of the land) with canals to fill it. The palace shall be well served by both land and water trade routes and (be capable of being) a market town?. The importance of an unassailable fort has never been doubted: ?it is in the fort that the treasury and the army are safely kept, and it is from the fort that secret war (intrigue) control over ones partisans, the upkeep of the army, the reception of allies and the driving out of the enemies and of the wild tribes are successfully practised. in the absence of forts, the treasury is exposed to the enemy, for it seems that for those who own forts, there is no destruction".

Most of the ancient sacred texts on architecture, the vastushastras, have classified forts into various categories, each of which is built to meet various strategic considerations and availability of natural resources, most importantly rivers, lakes and wells with a perennial water supply. Traditionally, forts have been classified under six categories, a classification accepted by Manu, Kautilya and vastushastras with little variation: l. Mahidurga; 2. Abdurga and Jaladurga; 3Vanadurga or Varksyadurga; 4. Nrudurga or Baladurga; 5. Giridurga; and 6. Dhanudurga.

Mahidurga is the fort made of earthen ramparts and fortification walls. This is one of the most rudimentary foundations for a fort which is primarily meant to protect the habitation against the enemy and wild animals. Such forts have the same structural elements as the other forts. It is their construction in mud and brick which distinguishes them, built in regions where stone is in short supply or where the fort has to be built in a very short time. Such forts have been built in various parts of the country. The last important mud fort or Mahidurga was Badalgarh the fort built by Sikandar Lodi in Agra on whose foundations Akbar built the Red Fort in the 16th century CE.

The Abudurga and Jaldurga are forts provided with a natural defence by the surrounding rivers or lakes. Crossing the river in spate would always be difficult and the enemy was forced to wait for a fall in the water level. The availability of a perennial supply of water enabled the occupants of the fort to continue a long resistance against a siege by the enemy. The Jaldurga is difficult to conquer and has its advantage over a fort built on ground level. But it can be reached through bridges of boats or even elephants lined in a row. Once the roads connecting a Jaldurga with the land are cut off, it loses its contact with the world outside, and, denied renewed supplies of arms and food, soon surrenders to the The building of a great fort has always been regarded as of paramount importance. Indian scriptures and classics only state a time-tested maxim that a small garrison of soldiers hidden behind the curtain of ramparts can harass large contingents of invaders pounding on the walls from outside. Most of the great battles of the Mughal armies against Rajput rulers resulted in protracted sieges for this simple reason. Scaling the high fortifications was an extremely daunting task and only clever military strategists could provide a solution to the challenge. Alauddin Khilii resorted to deceit to gain entry into the Chittaur fort. Akbar built concealed passages (sabat) under the shadow of the ramparts and could fire into the fort only after he had raised the level of the hill adjoining a corner of the Chittaur fort. At Ranthambore; another impregnable Rajput fortress perched on top of a high rocky prominence abruptly rising out of the level land; the ditches skirting the rocky base of the fort had to be filled up with sand bags so that ramps could be built for carrying guns to the top. Only a strong Giridurga or hill fort has this advantage of holding on for long against the most formidable enemy armies.

The shilpashastras have elaborately dealt with the nature of fortifications, requirements of the ruler and, most importantly, security and defence of the fort. The Arthashastra of Kautilya provides crucial information on various aspects of constructing a fort.

The first most important consideration in starting the process of construction is the laying down of strong foundations. These foundations are dug deep into the ground and the earth removed can be used for raising the ground level within the enclosed area. Sometimes the foundations are dug up and left open to the elements for a season or two so that the base acquires firmness and does not sink when the heavy rampart walls are built over it. An interesting story relates to the building of the Red Fort in Delhi by Shahjahan in 1639 CE. The two architects? incharge of the construction had the foundations dug up and then left the scene. When they returned to resume work after a year they explained that they had not abandoned work or run away but simply allowed the freshly dug up earth to settle down under rains and gain firmness to prevent further sinking. It was absolutely necessary since the mammtoh rampart walls required a base solid as a rock.

The moats surrounding the rampart walls are generally filled up with water and covered with thick vegetation as a camouflage. These moats also function as nurseries for crocodiles. The enemy soldiers trying to reach the ramparts are compelled to negotiate the deep water-fil|ed moats. The moat at the bttoom of the inner citadel at Daulatabad is reported to have been particularly noteworthy for its scarped flanks and a large population of treacherous crocodiles. The triple moats around the Bidar fort are found to be extremely useful as part of the city's drainage system.

The ramparts on the fort wall indicate the strength of the fort. The shilpashastras provide detailed prescriptions for the construction of ramparts. The walls have a splayed base, thickest at the bottoom, decreasing in width with the rise of the ramparts. The ramparts are subjected to elephant attacks and gun powder, hence utmost care is taken to build them as resistant to extreme pounding. Frequently animals like lions, horses and elephants are depicted on the ramparts in relief carving or murals. Sometimes warriors with swords are also painted on the ramparts. The upper portions of the ramparts are generally built like battlements which provide cover to the defending soldiers who patrol the area. The rampart walls have sometimes inbuilt wide passages to facilitate movement of mounted soldiers swiftly shifting guard from one corner to another. The embrasures on the wall let in light and air and are also used to keep an eye on the world outside. The ruins of Alauddin khilji rampart walls at Siri have exposed wide tunnel-like passages running through the entire length of the outer double walls. The Purana quila in Delhi, built by Humayan, also has similar quila provisions for movements of troops within the outer double walls. 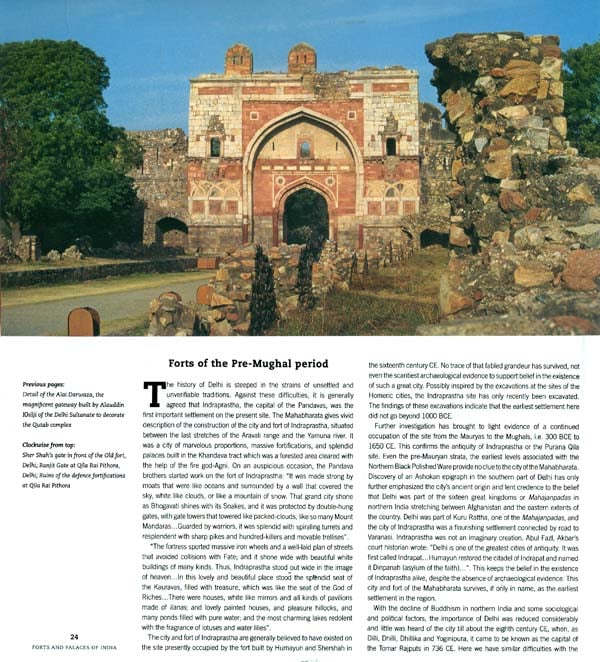 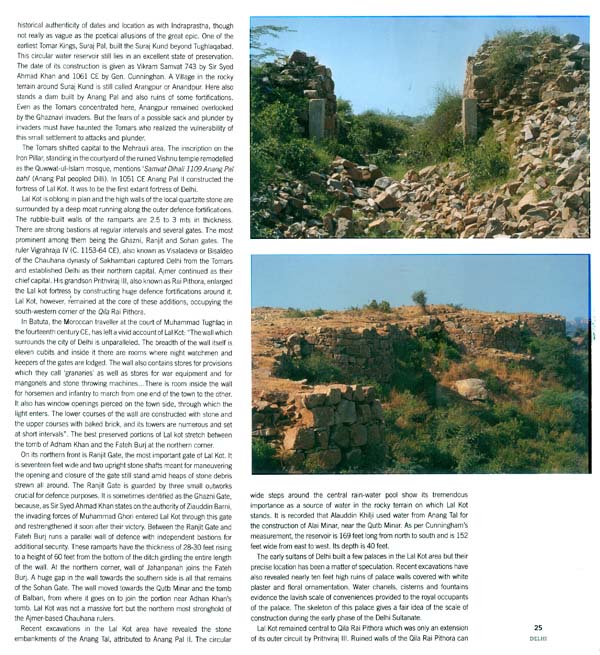 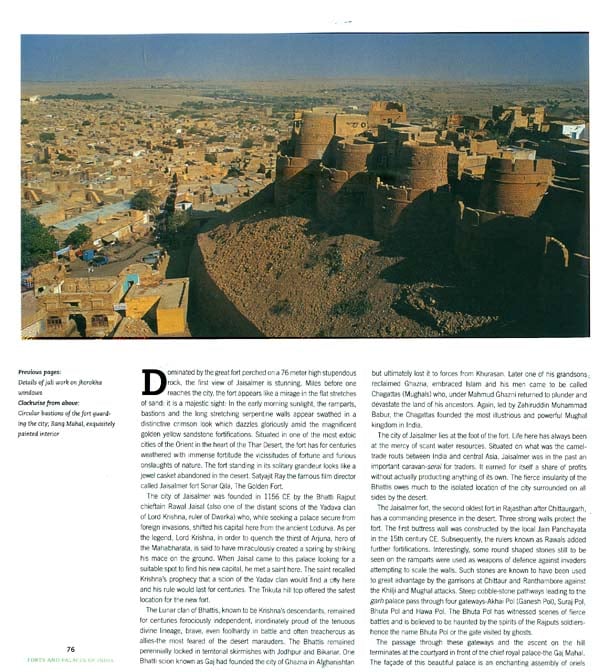 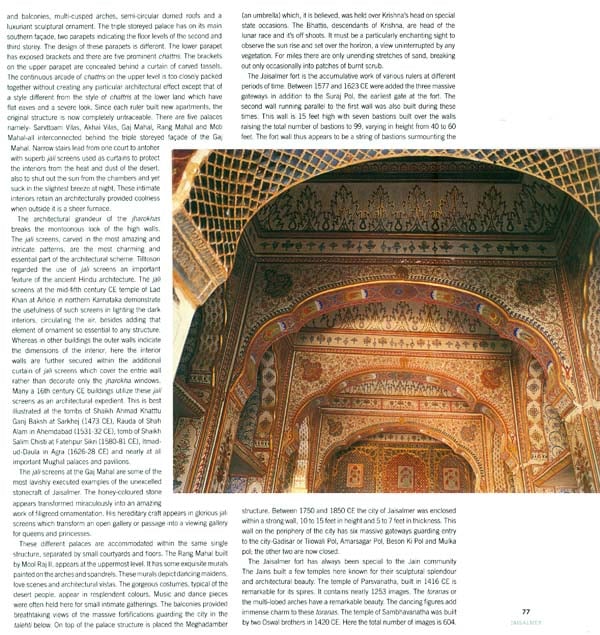 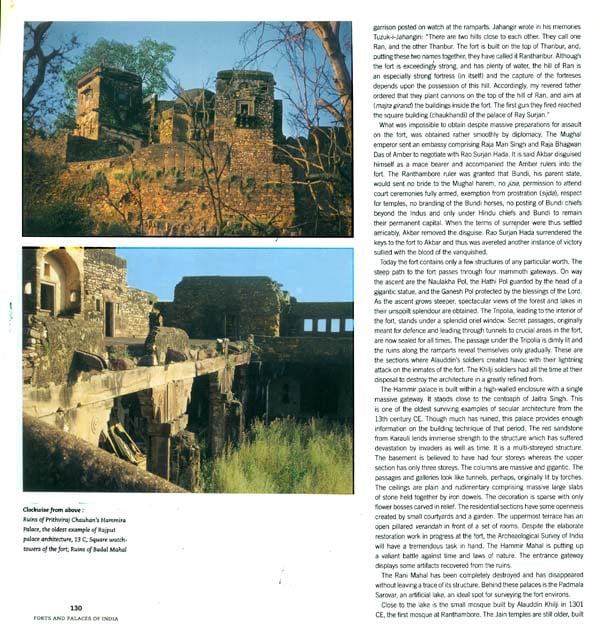 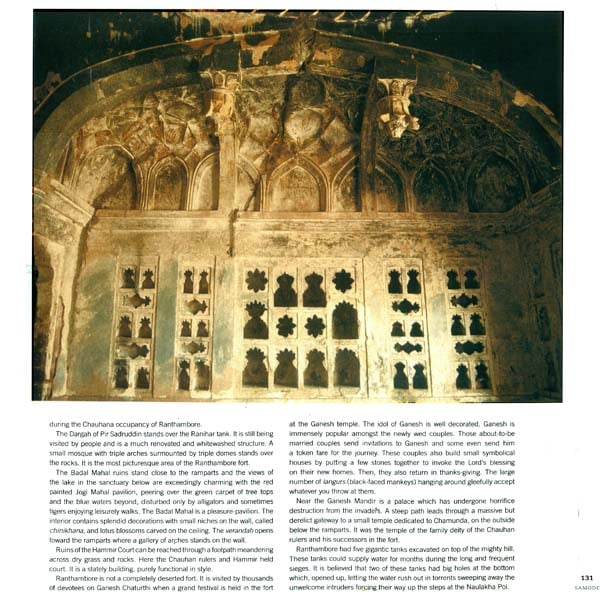 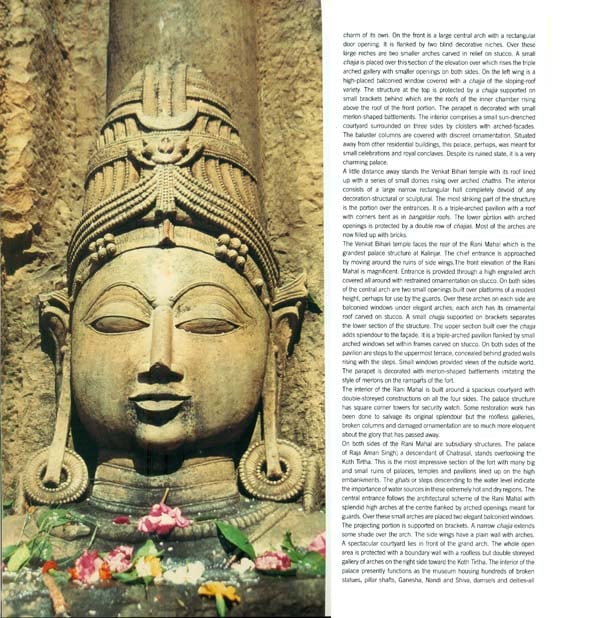 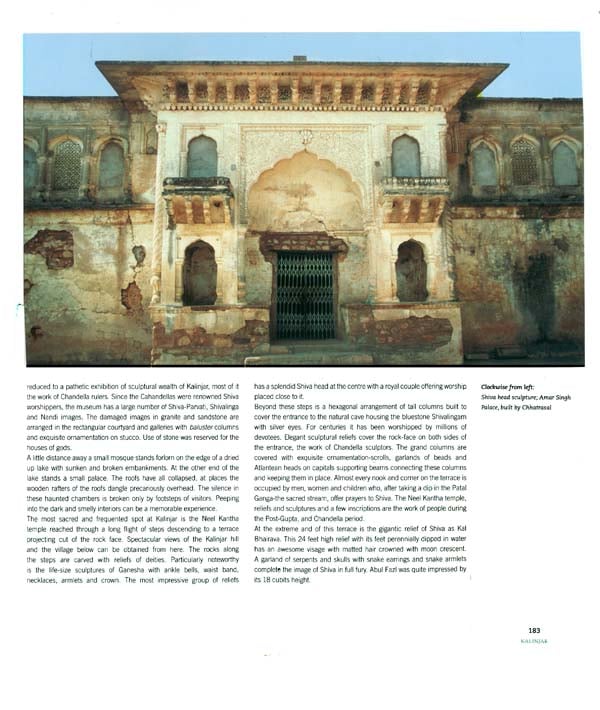 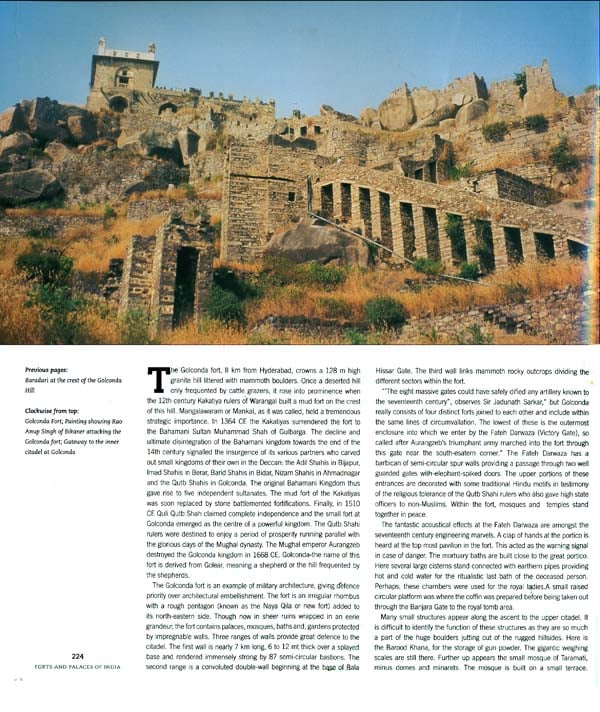 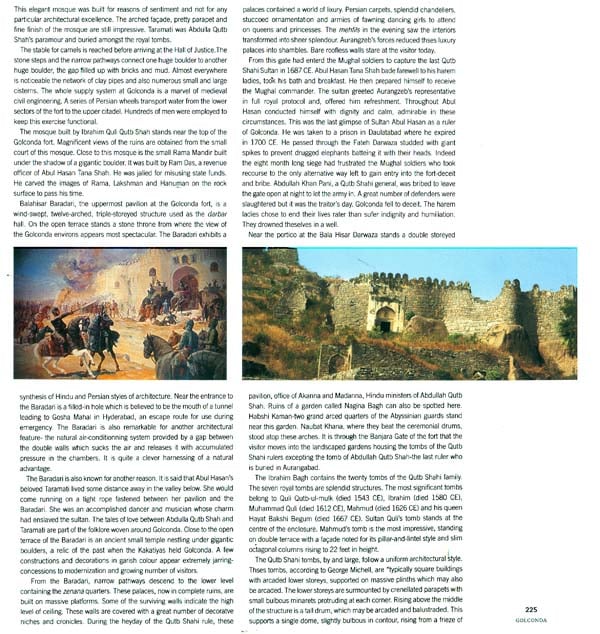 Pageant of King Mindon: Leaving His Palace on a Visit to The Kyauktawgyi Buddha Image at Mandalay 1865 (An Old and Rare Book)
By Chas. Duroiselle
$22
FREE Delivery The Forgotten Palaces of Calcutta
By Joanne Taylor
$62
FREE Delivery