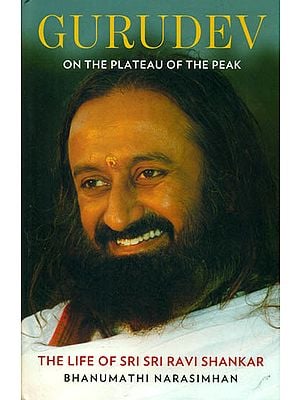 It was an era when the wisdom of yoga had been buried under years of ritual practices, when religion outweighed human values, when games were becoming wars and wars were being played like games. It was at such a time that, in a quaint village in south India, a young boy was found in deep meditation. He would say, 'I have family everywhere. People are waiting for me.' Nobody believed him then.

Time revealed the destiny of the millions who came to him to discover themselves. Over the years, his sublime presence and pragmatic teachings would foster the values of joy, peace and love across the world. His transformative art of breathing, the Sudarshan Kriya, became a household practice, an alternative way of life that inspired people to seek self-realization. He became the guru who made the ethereal tangible, who brought about a profound shift in every sphere of human endeavour-from art to architecture, health care to rehabilitation, inner peace to outer dynamism.

From a carefree child to a teenager often found in the company of saints, from a young meditation teacher to a revered spiritual Master, this book is an intimate and affectionate account of the life of Gurudev Sri Sri Ravi Shankar by his sister Bhanumathi Narasimhan, who witnessed his mystical life unfold up-close.

Gurudev: On the Plateau of the Peak is an attempt to fit the ocean in a teacup, offering readers a sip of infinity.

BHANUMATHI NARASIMHAN is the younger sister of Gurudev Sri Sri Ravi Shankar. Innocently at first, and with joyful awareness later, she has followed her brother, her Master, throughout her life. She shares his vision of putting a smile on every face on the pi et. She is a meditation teacher. Her workshops have brought about an experience of deep inner peace to thousands of people worldwide.

Bhanumathi leads the women welfare and child care initiatives at Art of Living. From a small free school with thirty children of construction workers, the Gift a Smile project now supports 435 schools with over 58,000 underprivileged children. As the chairperson of the International Women's Conference, her vision is to create a global network of responsible women to catalyse positive transformation in society.

She holds a master's degree in Sanskrit Literature. Trained as a Carnatic singer, people across the world wake up to her soulful albums of sacred chants and melodious bhajans. She has previously authored two books, Tejasvini and Lalitha.

Truth is Multidimensional.
Seated in the front row of a press conference organized in the ballroom of Hotel Nacional de Cuba, I felt like an island of calmness amidst a storm of emotions and unanswered questions hanging in the air. In the room, at least a hundred different conversations buzzed in Spanish. The floor was covered with a web of video camera cables of scores of TV stations. The cameramen kept shuffling around, trying to make sure they had the best vantage point. Most of them were unprepared for the truth of that moment. Ivan Marquez, the leader of the Revolutionary Armed Forces of Colombia-People's Army (FARC), walked in and took a seat, followed by Gurudev. Dressed in gleaming white robes, with his long hair and beard, Gurudev's saintly appearance was in sharp contrast to the general dress code of the place. Suddenly, all attention was focused on the stage. 'We agree with Master Shankar: said Ivan Marquez, 'that deep down, we are all victims. And if we begin with that understanding, we can leave behind the past, a sad story of violence that must not be repeated. With his help, we place our spirit in reconciliation with and in coexistence with our benevolent country, whose destiny cannot be that of war. We can have our political goals but with a new vision of non-violence.'

Responsible for the loss of nearly 250,000 lives over a period of fifty years, it was true that many looked at the FARC members as criminals. Yet, in Gurudev's eyes, it was also true that they were victims crying for help. These men of war, deep inside, sought a better future for their children. This was not the first time that Gurudev was taking up a cause like this. Driving into the red zone of Iraq, where even UN personnel think twice before venturing: walking through the 'No man's land' in Sri Lanka in an effort to reach out to the LTTE; visiting a war-torn Ukraine to revive its people's hope-was there anything that my brother would not do for peace? This was the first time that I was accompanying him on such a mission.

On 25 June 2015, we arrived in Bogota, Colombia, on the invitation of President Juan Manuel Santos. A ten-minute private meeting with the president turned into an hour-long discussion, and Gurudev 'promised to do whatever it takes to chart out a peace agreement. As we left and were on our way to Havana, I thought we were going to be in agyaat a few days of silence and rest. Little did I know what was in store for me. When we landed, we were picked up in a vintage car. I thought they had arranged it especially for Gurudev but soon realized that all cars in Cuba were similar.

The hotel was an old Victorian building-ornate, white, and clean. My room Was spacious. In one corner was a study. The bedside lamps were pretty and hand-painted. I had a very pleasant feeling within me. I settled in and slept with the thought of the beautiful dawn that I would wake up to. The next day, there was excitement as everyone got ready for the meeting. Although I did not speak a word of Spanish, I said, 'I'm coming too!' I was told that there would be guerrilla leaders and got mentally prepared to meet fierce-looking men with extreme ideologies. But I was pleasantly surprised to meet highly educated people who, despite their tense exterior, exuded warmth and softness. Everyone was supposed to be unarmed, but I had a feeling that weapons were somewhere within their reach.

They spoke with a great level of involvement. The translator was trying to express their feelings, but a sense of fatigue and frustration was visible. They had lost so many of their own kith and kin; they were tired of waging a ceaseless war. There were a few women present as well, and I was told that about 40 per cent of FARC members were women. Many of the commanders were in their late fifties and sixties and the urgency for peace was very evident. They had their own press, TV station, and almost ran a parallel government. They were powerful yet sought change. Gurudev listened to each one of them, shared their concerns, and deliberated together.

Every moment was poignant. On the very first day, a connection was made. On the second day, they recognized him as a Master. 'I have only seen wooden and stone figures of saints before, but today I stand before a living saint; said Pastor Alape, one of the FARC commanders. He gave Gurudev two stones-one to be charged with his energy and returned to the FARC, so that their people may touch the stone and feel his presence; and the other for Gurudev to keep. On the third day, they held Gurudev's hand and said, 'We promise the Master that we will adopt the Gandhian principles of non- violence.' I was touched. How was this possible? After having lived their entire lives as per certain rigid systems, they had melted in a matter of three days. Gurudev had inspired valour in the principle of non-violence. One of the journalists wanted to know how Gurudev had managed to change the minds of the FARC members so drastically. But was it really what was said that mattered or who said it that made all the difference?

We tend to live in our own bubbles. But travelling with Gurudev allows me to break free of these bubbles as I see people waiting for him everywhere. For instance, we met some representatives of the Mexican parliament in the hotel elevator. Gurudev greeted them, and when they came to know that he had come for peace talks, they were delighted and invited him to address the parliament in Mexico. Colombia, South Africa or the North Pole, airports, railway stations or walkways, the truth is that people are waiting for him. I have accompanied him to ninety countries, and everywhere I experience the cry of hearts, the longing of sincere seekers, and the ultimate quest of intellects to connect to something higher. And I have seen this connection happen naturally for so many through him.

Media hailed it as a historic moment. I was privileged to watch it unfold in front of my very eyes. As a child, while walking along the shores of the ocean, I would collect seashells, so delicate and pretty, and would feel that each one was a precious treasure. Now, walking along the shores of time, I feel that I have collected many such precious moments in my life. We went for a stroll along the beach with Gurudev after the press meet. I walked in silence, enjoying the soothing sound of the ocean. So many events in my life have risen and dissolved like the waves in front of me. Yet, there is stillness in the ocean depths. Everything around me has changed, but I have remained the same. Gurudev has remained the same. Once again, I pinch myself to make sure that it is true-he is my brother, my Master. But who in reality is he? 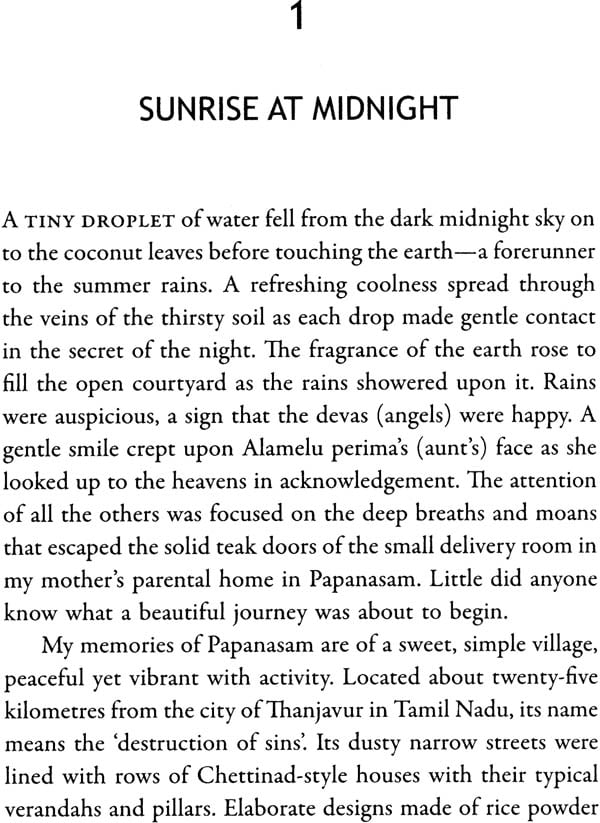 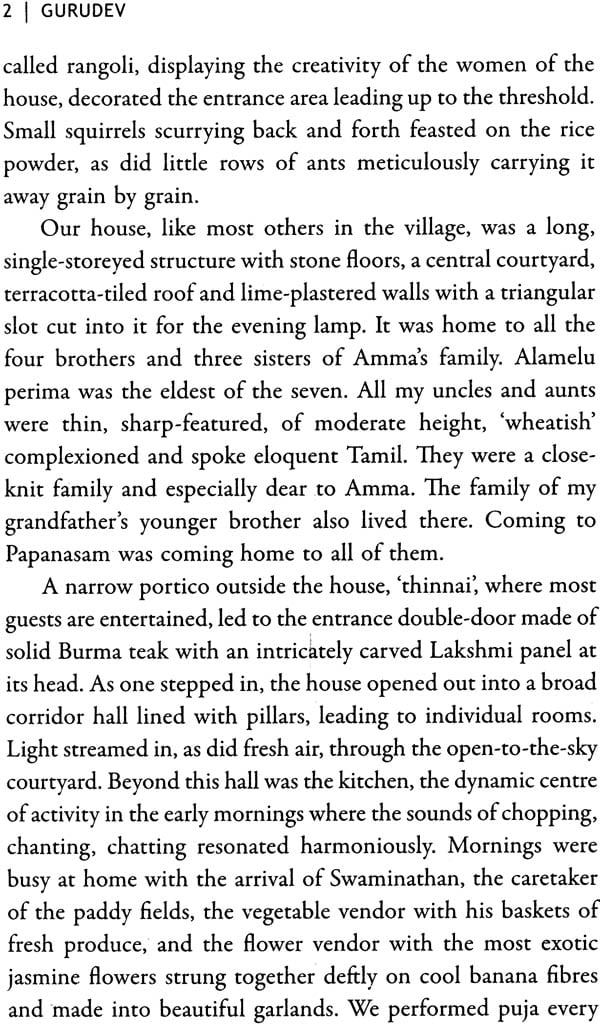 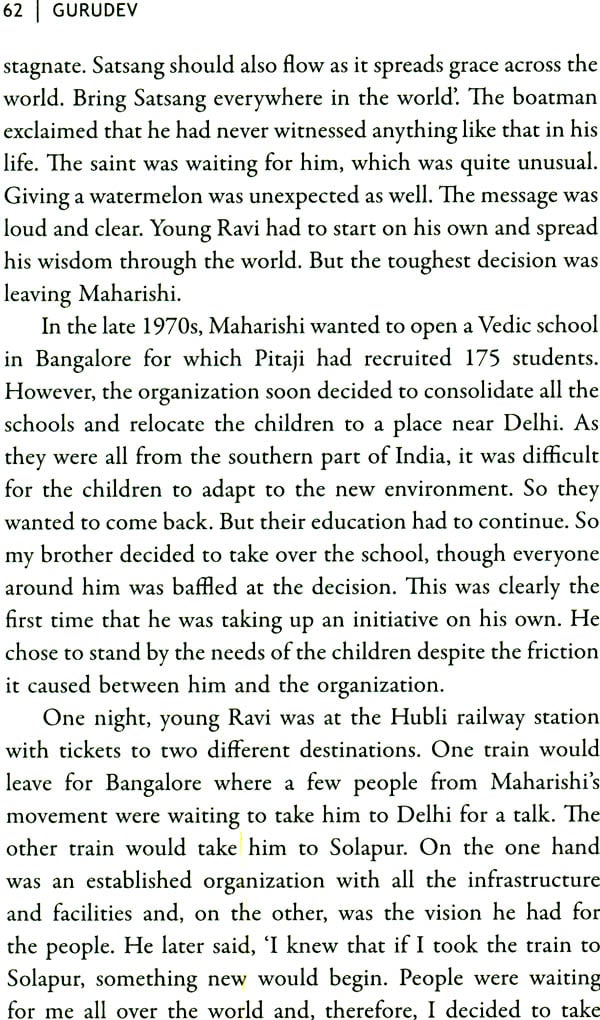 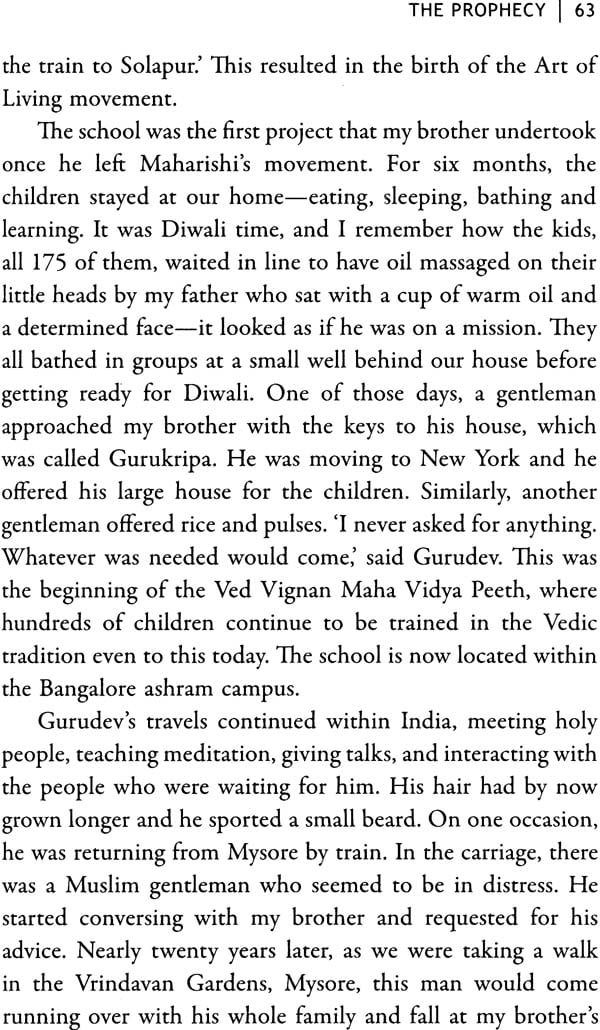 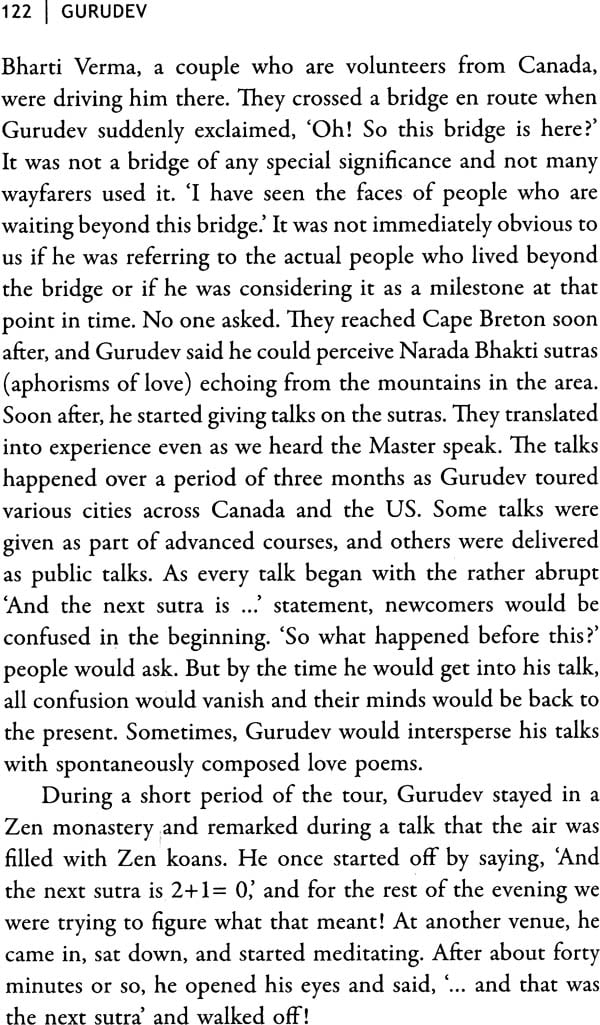 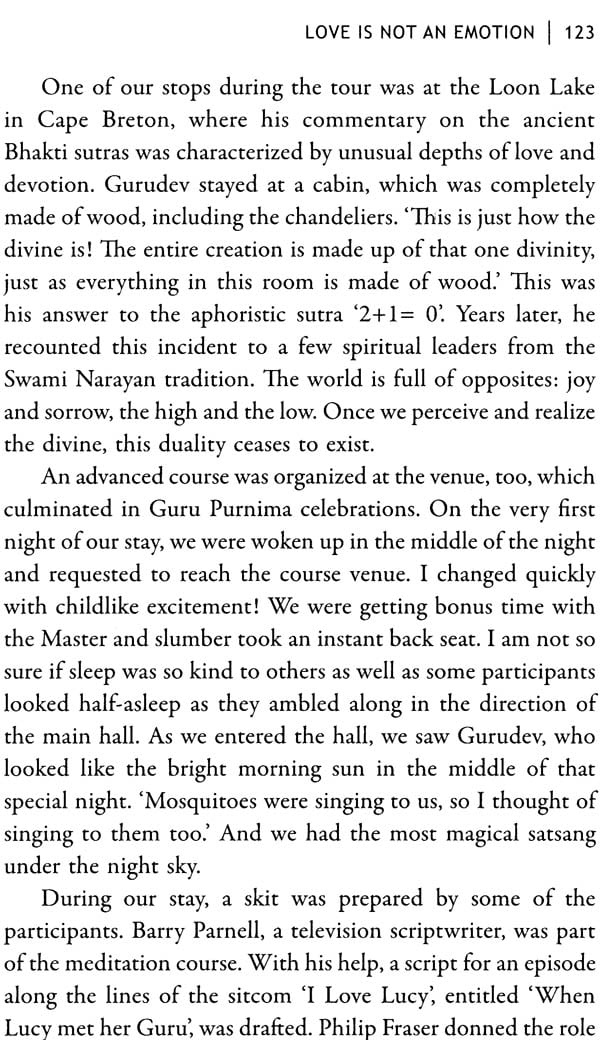 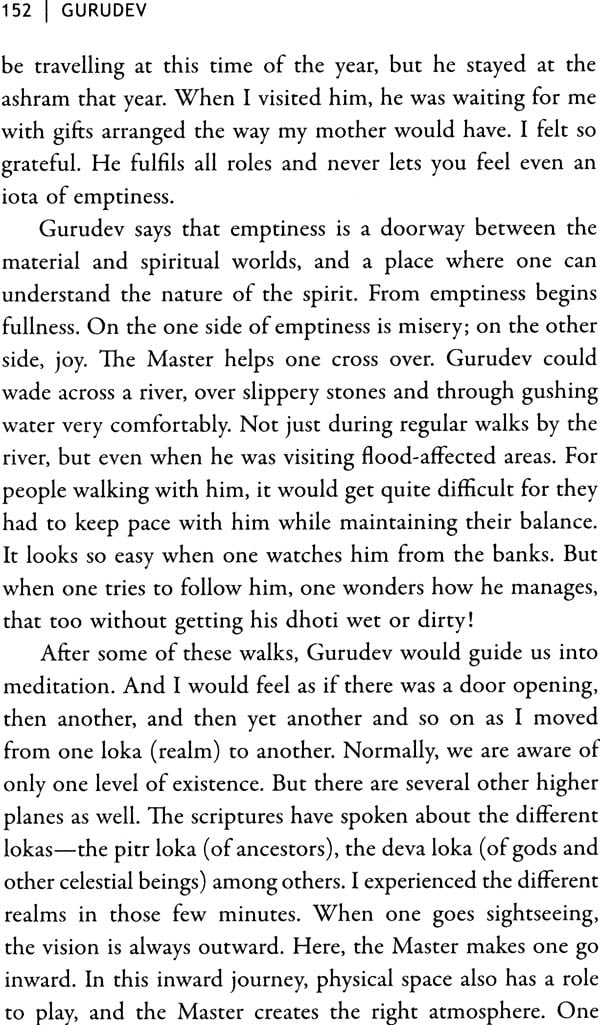 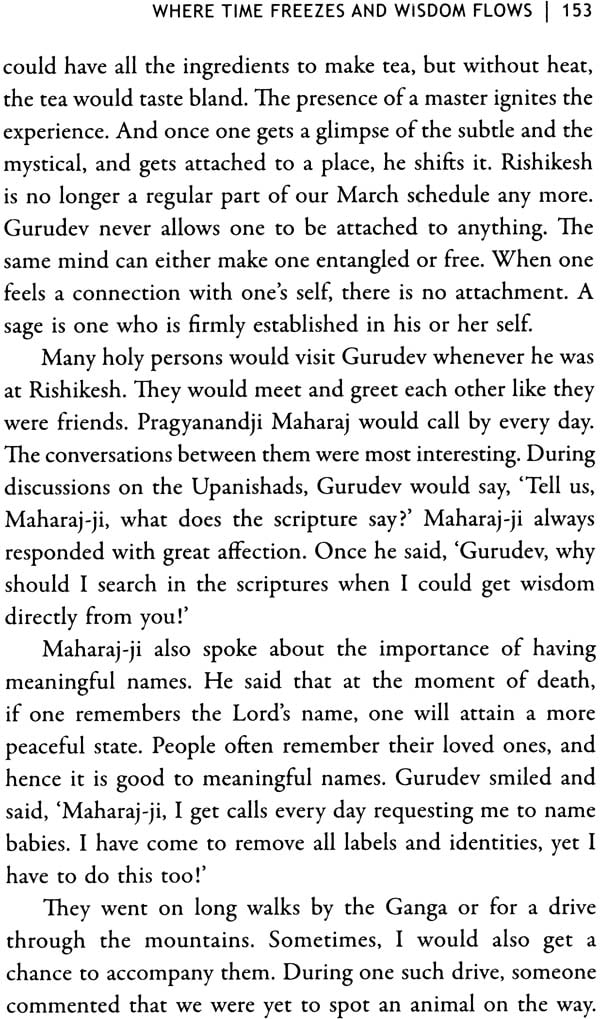 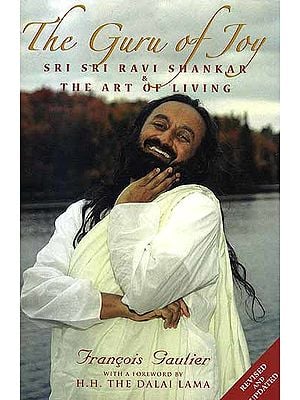 The Guru of Joy Sri Sri Ravi Shankar and The Art of Living
By Francois Gautier
$28.50
FREE Delivery 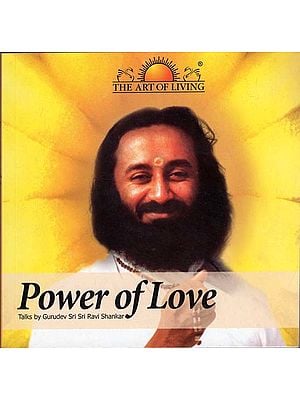 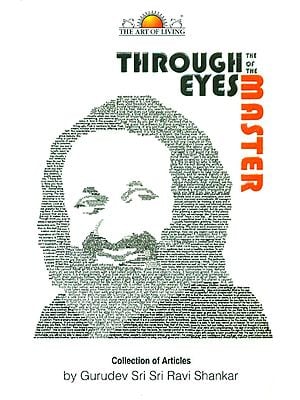 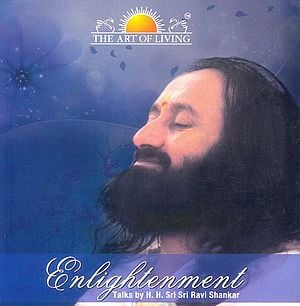 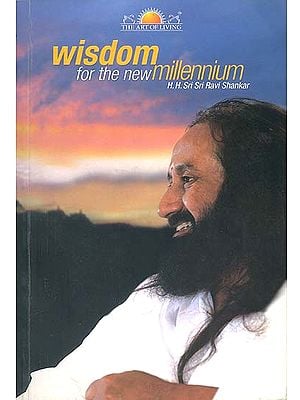 Wisdom for the New Millennium
By Sri Sri Ravi Shankar
$19 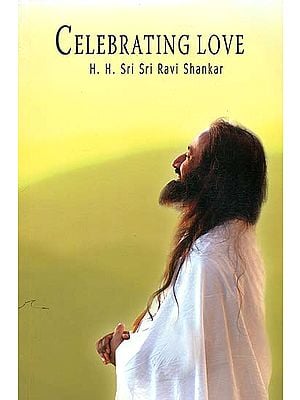 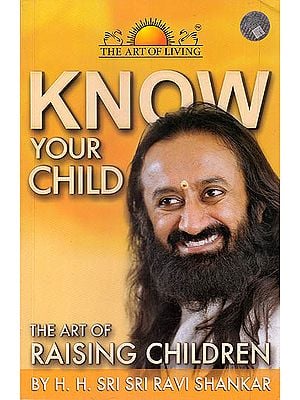 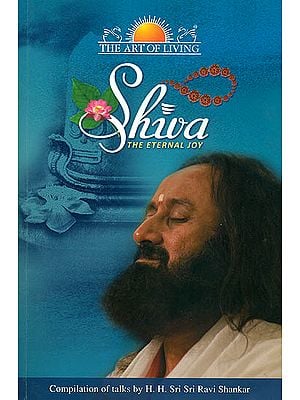 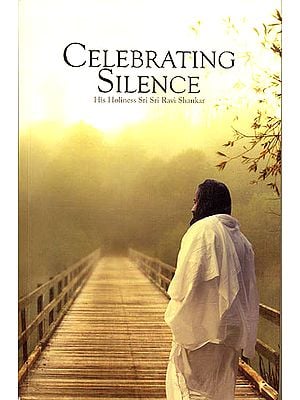 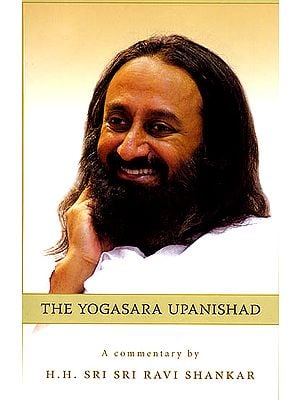 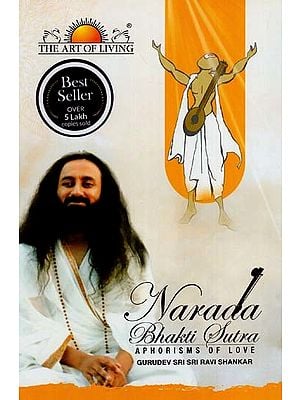