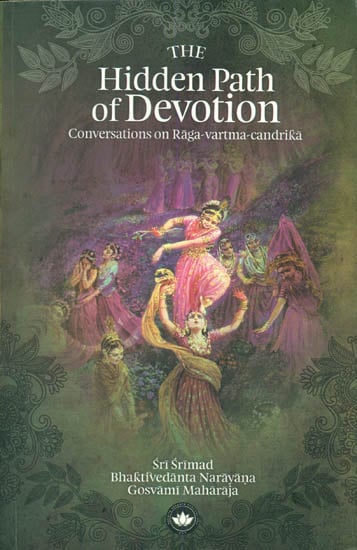 During amavasya - ratri, the dark - moon night when the moon is not visible, the night is so very dark. There is a narrow pathway, but it is unseen in the darkness. If the moon were visible, it would distribute its rays of light to reveal that path. This is the candrika, or moonray, that cast its light on the path of raga, or spontaneous loving devotion. It is therefore called Raga -vartma- candrika."

IT was the 1960'S - a time of search in a dark world. Disillusioned by parents, teachers, religious figures, and public leaders, disillusioned with government policies on war, human rights, and goals of life, many Western youth became attracted to left-wing political ideologies.

Many searched for enlightenment, not quite knowing what it would or wouldn't be like. Though unaware of its meaning and thinking that perhaps it included promiscuous sensuous enjoyment in the mode of animals, they searched for love, peace, and spiritual expression. They created new heroes, looking for leadership in folk singers who were 'freedom fighters. Experimenting with hallucinogenic and other mind-altering drugs, they only knew that they were looking for 'something else' something exotic and non-Western, something transcendental. During their attempt to uncover themselves and their real self-interest, they questioned: "Who am I? Why am I here in this world? Why am I suffering? Why is the rest of the world suffering? Is there really a God? If so, is He the all-pervading 'It' that is ultimately 'Nothing'? Am I that 'It'?" The Hidden Path of Devotion The low-rent East Village area, with its dilapidated gothic landscape and history of beatnik intellectualism and antiracism seemed to fit the bill, becoming the destination of choice for those looking to escape mainstream America. In the East Village, America's disillusioned youth flocked to watch psychedelic light shows and hear folk-rock. The hippie-culture blossomed, espousing libertarianism, nuclear fatalism, eastern mysticism, and civil rights.

As the months rolled by, many of the youth realized that something was amiss in this new alternative culture. The leaders of the new culture told them that it was the industrial- military complex that was to blame for the world's problems, yet those leaders had no plausible solutions to offer. The most lauded folk-singer, Bob Dylan, sang the obvious, "The Times, They are if Changin'," while assuring the 60's generation that ". The Answers Are If Blowin' in The Wind." But neither he, nor anyone else, could grab those answers from the wind and show them to the generation looking for change.

It was within this counter-cultural setting that the great, self-realized spiritual master, Sri Srimad Bhaktivedanta Svami Maharaja, arrived from India in 1965. He settled first in uptown Manhattan, and later moved to the East Village. There, at the age of seventy, he chose to build his first temple of Krsna consciousness and begin his task of injecting the timeless, spiritual wisdom of ancient Vedic India into the searchers' hearts. He told them, "We are not this body. We are spirit souls, part and parcel of the Supreme Personality of Godhead, Krsna, Our only duty, and our only happiness, is to serve Him.

Many people consider religion to be a part of general history, and certainly religious movements have influenced and shaped the course of events through the ages. In the case of the Krsna conscious movement, Krsna, the supreme founder Painting the Background of religion, used social, economic, and political situations for an altogether divine purpose. Vedic teachers say it was neither the Vietnam War nor the civil rights movement that caused the peoples search for transcendence. Rather, the time was ripe.

We read in the ancient Vedas of India that the Supreme Lord Krsna, the source of time, appears whenever and wherever there are discrepancies in the principles of pure life and a predominance of irreligion and materialistic activity. He appears whenever it becomes necessary to relieve the Earth of the burden of accumulated sinful activities, and to liberate the pious from the cycle of birth, old age, disease, and death. He comes when people are ready to receive Him. When He appeared on Earth five thousand years ago, the world was overburdened by the military arsenal of demons who were posing as royal kings. Just before His advent, the world was in a state of pandemonium.

That same Krsna, in His form of time - now the 1960's - painted this social background of experimentalism and a mood of strong anti-establishment. Such an atmosphere provided the perfect setting for His divine messenger, Srila Bhaktivedanta Svami Maharaja, to paint the foreground - a revolution in the impious life of a misdirected civilization. Srila Bhaktivedanta Svami Maharaja, later to be renowned throughout the world as Srila Prabhupada, offered the disenfranchised and discontented American youth, and later people all over the world, everything they were yearning for, and more. He inspired them towards the purpose of life, and showed them the path to attain it.

What is the true meaning of yoga? Yoga is a Sanskrit word that means 'connecting two things: or 'adding two things together.' If you want to connect two bricks together, then cement, water and other substances are needed. Similarly, real yoga is the process of connecting two persons; one being the Supreme Lord and the other being each and every spirit souls.

Forgetting the Supreme Lord, we, the embodied souls, suffer greatly. We have passed through all the various species of life, as donkeys, asses, dogs, pigs, and sometimes as demigods. By His causeless mercy, the Supreme Lord Krsna has now given us the opportunity of this human life. But this form is very temporary; we do not know when we will die. We grieve because we are under the illusion that we are this body, which is a bag of urine, stool, blood, and other unwanted things. We believe we are this body, and we endeavor only to please it. We do not try to satisfy our soul.

The easiest way to meet with Krsna is through yoga. We are His parts and parcels, His eternal servants. There is no question of comparing Krsna's servants with worldly servants. However, as service to Krsna is very loving and beautiful, like that of a friend, mother, father, or son, or like the service of a lover towards his most beloved, Krsna's eternal servants are ail, by nature, very loving.

What is taught as yoga nowadays is merely the exercise of the body. By exercising throughout our life, or throughout our thousands of future lives, still we will not be happy. We will repeatedly grow old, and one day we will have to give up this body.

Here, we are discussing true yoga, the ultimate connection. By what process can we meet the Supreme Lord Krsna? It is through the process of love and affection called bhakti-yoga. By giving our love to Krsna, we can attain that perfection stage in which we will be happy forever.

But what is that process? How can we attain the stage of prema, or pure love of God?

Uttama-bhakti, or pure devotional service, is the cultivation of activities that are meant exclusively for the pleasure of Sri Krsna, or in other words the uninterrupted flow of service to Sri Krsna, performed through all endeavors of the body, mind, and speech, and through the expression of various spiritual sentiments (bhavas), which is not covered by jnana (knowledge aimed at impersonal liberation) and karma (reward- seeking activity), and which is devoid of all desires other than the aspiration to bring happiness to Sri Krsna.

This is the definition of uttama-bhakti, or pure devotion. By this love and affection for the Supreme Lord, we can meet with Him and serve Him. Scripture states: "Paranuraktir isvare- deep and strong affection to lsvara, the Supreme Controller Sri Krsna, is the only transcendental religion of the soul."

The supreme occupation (dharma) for all humanity is that by which mankind can attain to loving devotional service unto the transcendental Lord. Such devotional service must be unmotivated and uninterrupted to completely satisfy the self

What would be the use of accepting God if He has no mercy or attributes; if He is like zero? We do not wish to accept such fallacious ideas. Without selfish motive, we desire that whatever we do, we do to please Krsna. We are advised to consider, "What I am going to do - will it please Krsna or not? Will it please my Gurudeva?" In bhakti yoga, we consider, "Only if our endeavors please them will we perform those acts, we will strongly rejecting whatever is unfavorable for advancement in bhakti." This is bhakti-yoga, and it begins from its smallest fraction, called sraddha. (faith). 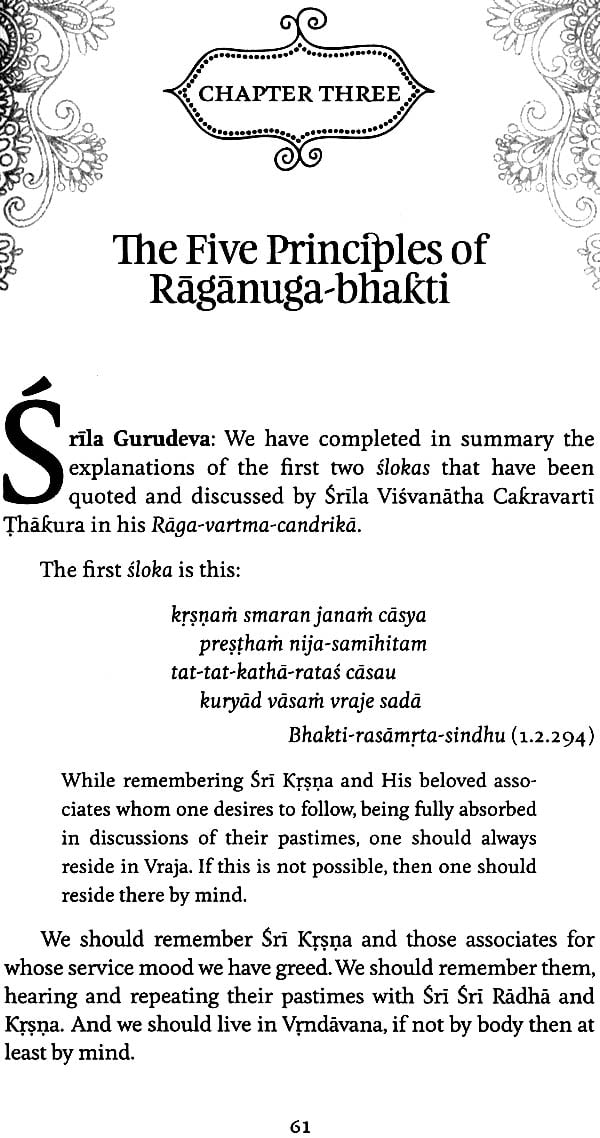 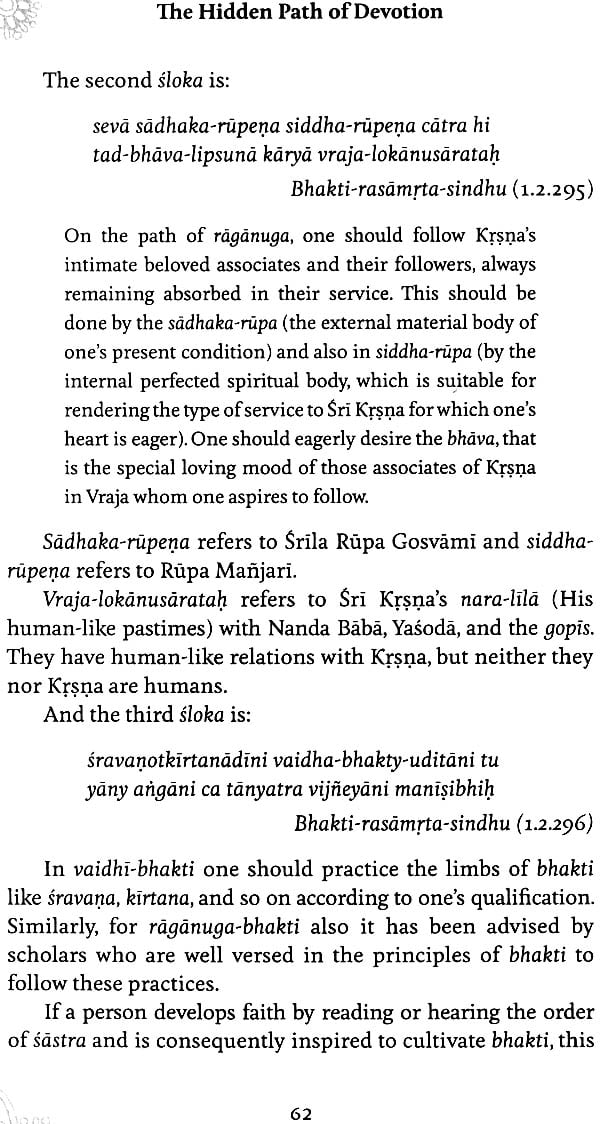 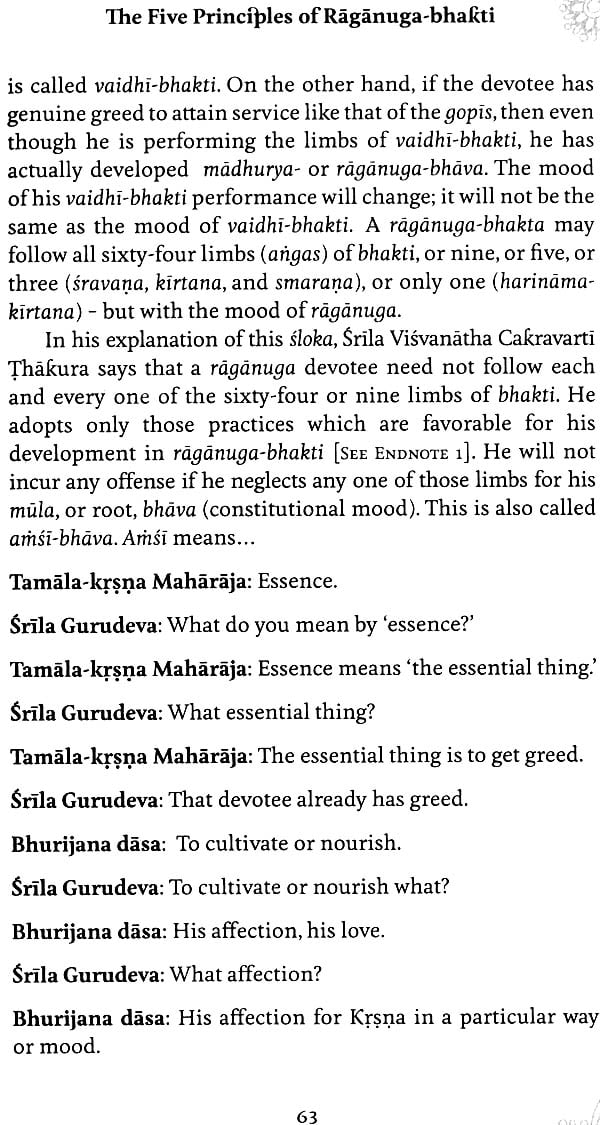 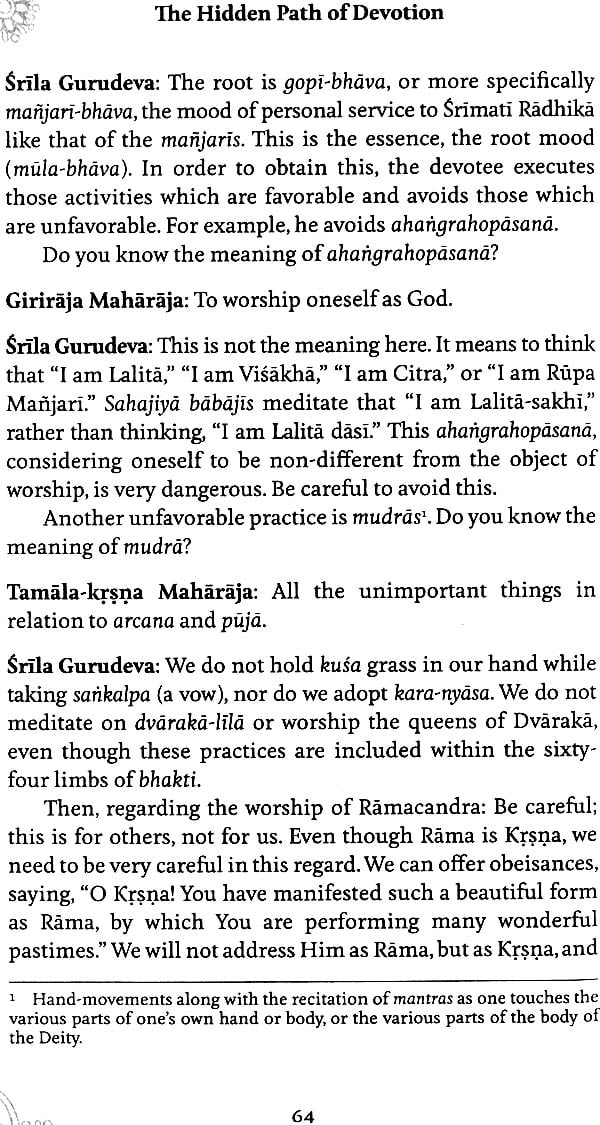 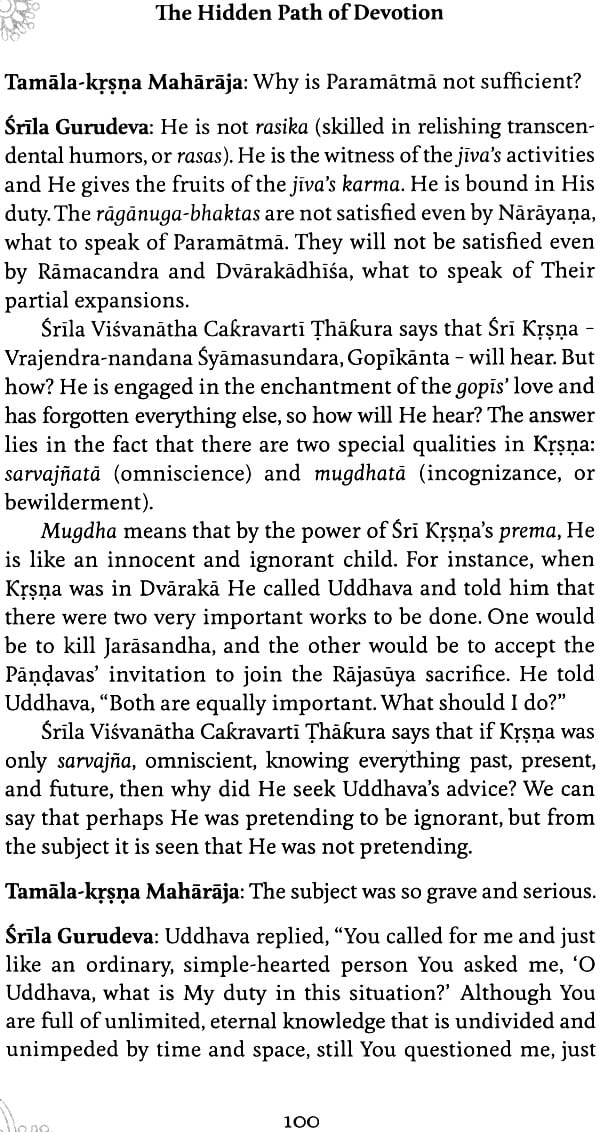 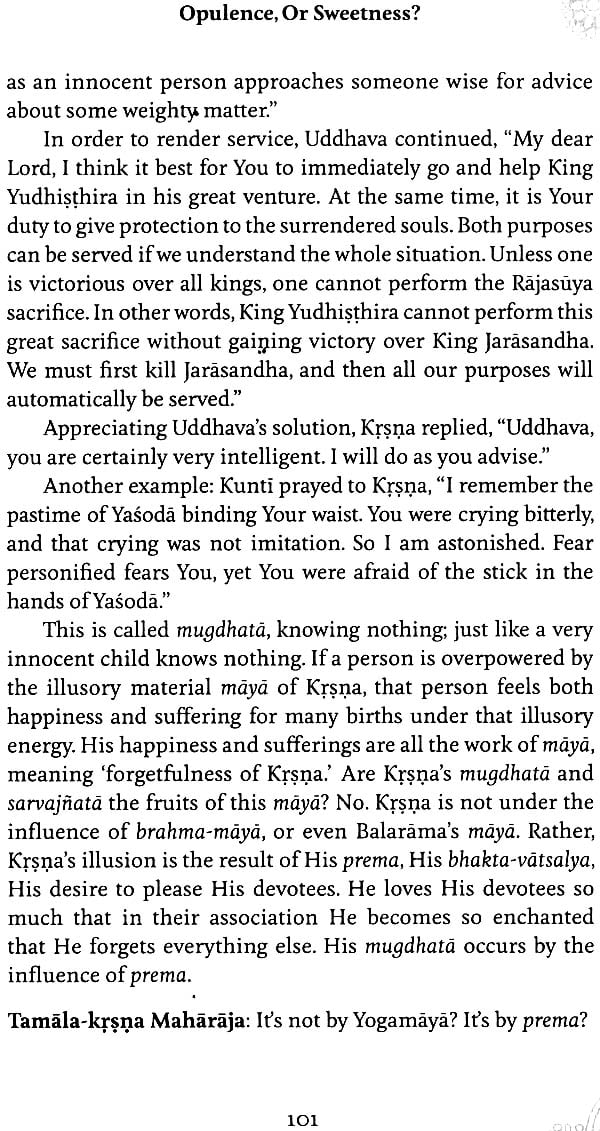 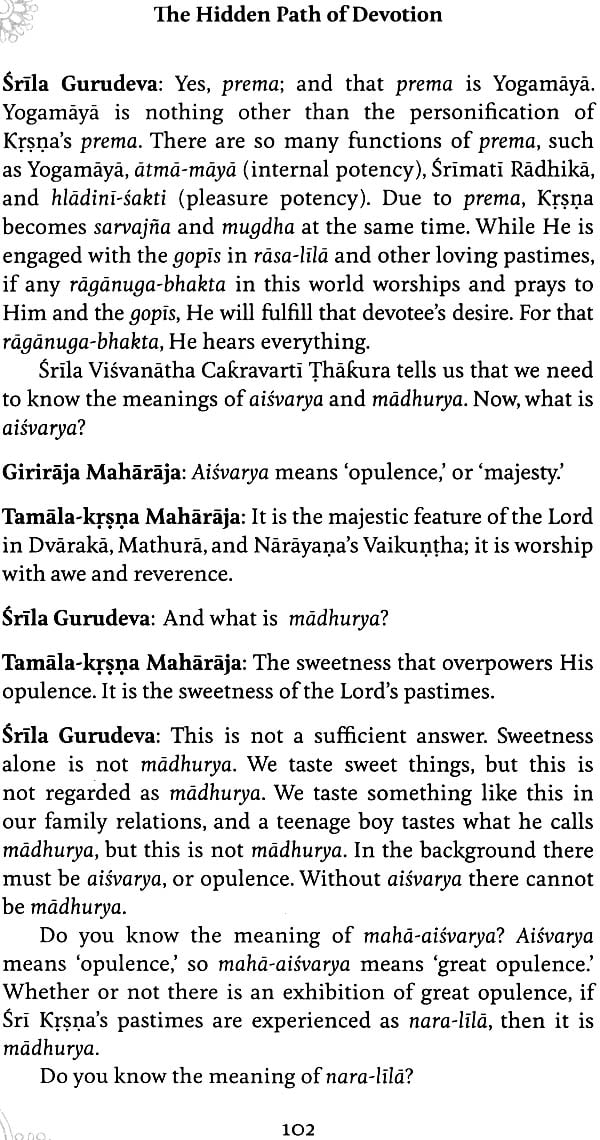 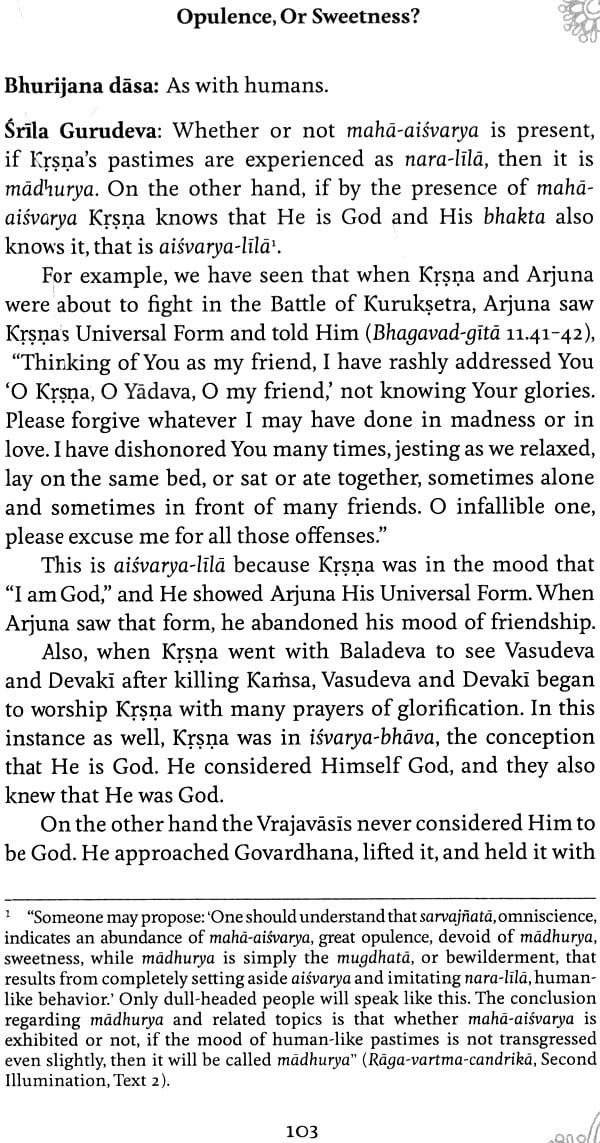 Raga Vartma Candrika (A Moonbeam To Illuminate The Path Of Spontaneous Devotion)
By Srila Visvanatha Cakravarti Thakura
$24.80
FREE Delivery
$31  (20% off)