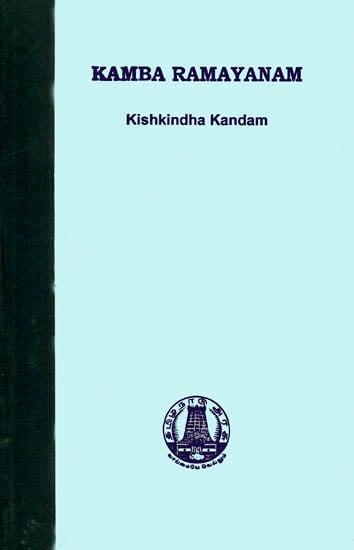 The Kirshkindha Kandam, the fourth canto of the Ramayana and occupying the centural place in the epic, has for its locate the kingdom of Sugriva, the monkey-chief whom Rama was advised to seek enable him to recover his abducted wife. Those who gave him this advice must have been aware of how much more powerful than Sugriva was his elder brother Vail, both in the position he now occupied as the King of Kishkindha from where Sugriva had been driven out and which he had no chance of recovering without external help. They could not have thought Vali's help would have made Rama's efforts so much easier to make, and therefore would have diminished his own greatness and glory. We have no basis on which to infer the that in their opinion Vali was a wicked creature and therefore was unworthy of being wooed by Rama. All that we do know is that Rama was willing to be guided in this matter by Kabandha and Sabari; and that when Hanuman approached him as a messenger from Sugriva, and he heard Sugriva's tale of woe, he immediately swore an eternal friendship with him and promised to free him from his brother's tyranny, and not only restore his stolen wife to him but also make him King of Kishkindha.

In Valmiki, Hanuman speaks to the brothers from Ayodhya at some length and provides enough evidence to Rama to conclude what a learned person he was, how meticulous a scholar, and how tactful an envoy. Kamban in rushing through this part of story leaves more to instinct and superhuman understanding than to reason and credibility.

In the original Rama's strength is tested first with Dundubhi's carcase and when he answers that test, then with the row of maramara trees, on the ground that the carcase after all in its dehydrated form would have been easier for Rama to tackle than Dundubhi would have been for Vali when he was alive and kicking, full-blooded and fully thewed. Why Kamban reversed the order is not clear. He gives the credit for kicking the bones away to Lakshmana under his brother's order, no doubt to ensure that the younger hero also has something to his credit.

In Valmiki, the fight against Vali is on two successive days. By telescoping this into one day Kamban shows himself blind to the question of probability. At what point during the fight could Sugriva have approached Rama to bestir himself? When it was decided that Sugriva should wear a garland of flowers to distinguish himself from Vali, and he was being fitted with such a garland, where was vali and what was he doing? How could he not have observed what was going on in interval during the fight, and been alerted against outside help?

In the argument between Rama and Vali after the latter is mortally wounded, Kamban improves upon Valmiki. Righteous Rama in Valmiki defends himself by saying that Vali was after all but an animal, and animals could be hunted in any way convenient to the hunter, from behind or sideways, from a place of hiding, not necessarily face to face. At the same Rama taken him to task for depriving his younger brother of his wife, applying human standars to the transaction. Vali in Kamban makes it clear that animals do not enter into a holy wedlock incest simply will not apply to them. To this Rama's reply is that Vali and Sugriva being the some of gods were more than mere animals and should, along with Gajendra and Jatayu, be considered not sub0human but, if anything, superhuman.

The high regard in which Bharata is held by Kamna comes out is the question put into the mouth of Vali,smarting under the treacherous shaft of Rama, "How could you be Bharata's elder brother?—aquestion which is legitimate when a father or an elder brother is invoked with reference to a younger one's conduct, because such conduct can be presumed to owe something to the elder's precept and example, becomes meaningless when a younger man is invoked in such a context. But Vali (or Kamban) under a stress of emotion should not perhaps be expected to be logical.

It is curious that the plea put forward in defence of Rama by some of his devotees --- that, because of Vali's boon that whoever fought with him would straightaway lose one half of his strength to him, it was not possible for Rama to meet him openly, -- has no support in Valmiki, though in Kamban Vali himself mentions this advantage in his talk with Tara dissuading him against meeting Sugriva on this particular occasion. In the end Vali allows himself to be silenced by Rama, and ends with a paen in his honour longer and far more detailed than in Valmiki. This is as in the Adhyatma Ramayana which was the basis of Tulsi Das' Ram Charit Manas and seems to have influenced Kamban also.

Sampatr's asking the monkeys to invoke the name of Rama so that his burnt feathers might sprout again has no basis in Valmiki. It is characteristic of Kamban by whose time the deification of Rama had become complete. Siva, a god of the Trinity, and to his worshippers the greatest of the three, is the admiring narrator of the exploits of Rama to his consort Parvati in the Adhyatma Ramayana, and is credited with the remark that the recitation of the single name Rama is equivalent to reciting the thousand names of God, Vishnu in particular. This belief had gained firm ground in South India at any rate by the time of Kamban.

Hanuman too gains in stature in Kamban as compared with Valmiki. In the Sanskrit Ramayana, the monkeys get out of the tunnel into which they had gone by simply closing their eyes as ordered by Swayamprabha whose powers are used to get them out. But in Kamban, it, is Hanuman whose tail they have to catch to find their way, and whose prowess shatters the top and sides of the tunnel.

Rama's description of Sita item wise is, to say the least, "shy-making," and would not really help in identifying anybody --- apart from the fact that it is to a devoted messenger that such a description is given. A much-admired sloka in Valmiki --- which the critical edition of the Ramayana regards as probably an interpolation --- says that Lakshmana expressed his inability to identify any ornament worn by Sita in her ears or on her hands because he never lifted his eyes above her anklets. Would Rama have really expected Hanuman to scrutinise Sita's breasts, waist and what was below her waist, belly button and all? The scholiasts say that this would not have been Rama's intention, and Kamban was only following a well-known prescription that a classical poem would not be complete if it did not contain an itemwise description of what constitutes beauty in a woman's body. But one would have thought that a poet of Kamban' s stature writing about men and women however idealised would not, out of deference to a convention, forget altogether the appropriateness of what he wrote to the time, the place and the persons .

His sense of appropriateness however comes to Kamban's rescue when he wants to idealise what Valmiki with his more realistic awareness of human nature presents as it is, warts and all. This comes out in his portrayal of the relationship between Angada and Sugriva. When the year is over within which Angada and his party were to have located Sita, Angada says in Valmiki that rather than return to his uncle to be victimised by him he would stay where he was and even establish his own fiefdom. Sugriva, according to him, was both cruel and unprincipled, appropriating to himself his brother's widow Tara, and generally ill-disposed to Angada himself. Kamban avoids all this, and says nothing about Tara having been taken over by Sugriva. Tara in Kamban is a model in every way, and Angada has no rebellious sentiments against his uncle. There is no need for Hanuman to advise him against breaking away from his uncle, because such a thought is not allowed to enter Angada' s mind.

Kamban's similes, much admired, are quite often merely "pretty- \ pretty," with a cloying predilection for the pathetic fallacy, or a tendency to pack gnomic wisdom. The comparison with which the Kishkindha Kandam concludes is however a magnificent piece which is not based on anything in the original. When Hanuman deciding to jump across the sea inflates himself, the entire Mahendra mountain is described as no more than a pedestal to the towering pillar which was Hanuman, his feet on the crest of the mountain and his head touching the sky. A magnificent picture, which explains why so many Hanuman sculptures in our country are cast in super-human proportions. We too have our colossi like Rhodes and Egypt.

The description of the rainy season, both its earlier and later halves, is superb.

All this, it must be emphasized, is only as regards the substance of the Kandam, not its Tamilversification. That can be appreciated as it deserves to be only by those who not only know the language but know it well. That Kamban himself loved Tamil and the Tamil country with all his heart is evident in the stanzas he devotes to the description of the Chola, Chera and Pandyan kingdoms of Tamil country, to the river Cauvery Tirupati and Agastya. The wealth and variety of the lines he hues, and their complete adequacy whether to portray love or scorn, wonder or terror, pity, anger grief, admiration are altogether beyond praise.

In addition to the 1,032 stanzas of this kandam printed in the body of the Kazhakam edition, the Gopalakrishnamachariar volume has eighteen others, which too I have translated and shown at the appropriate places. Practically all of them however betray their dispensability! 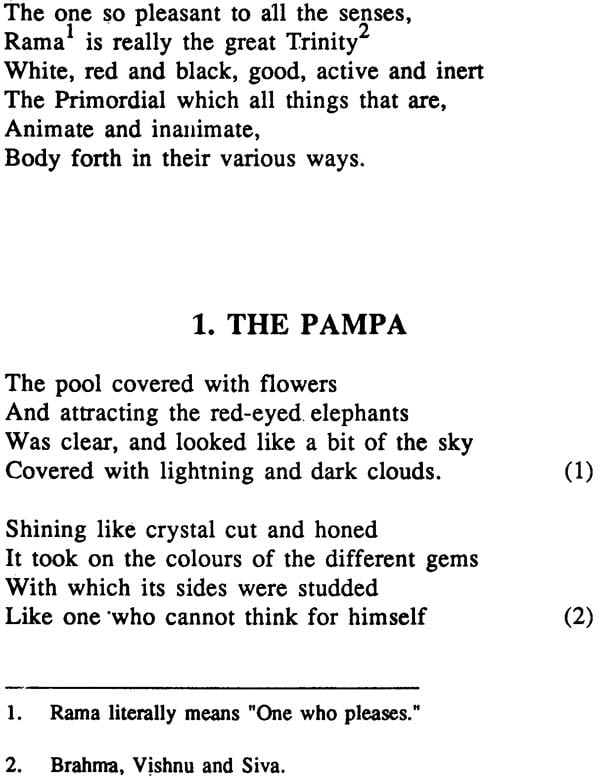 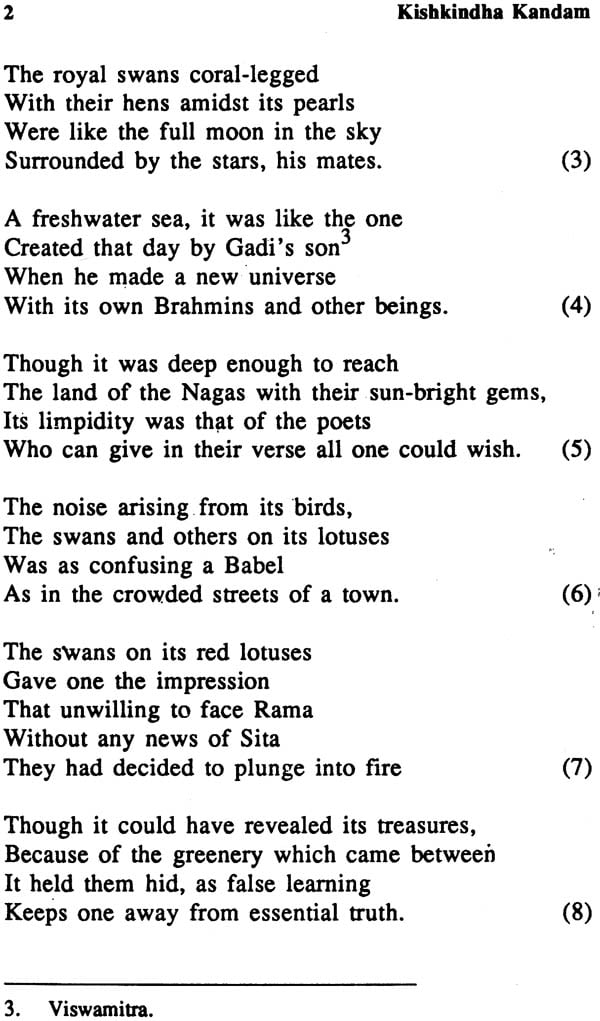 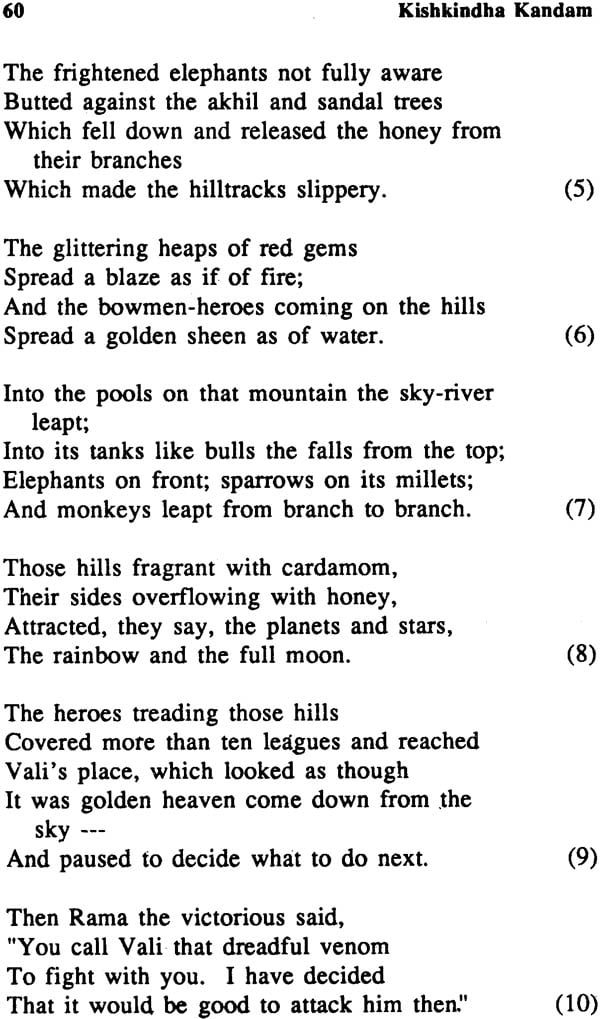 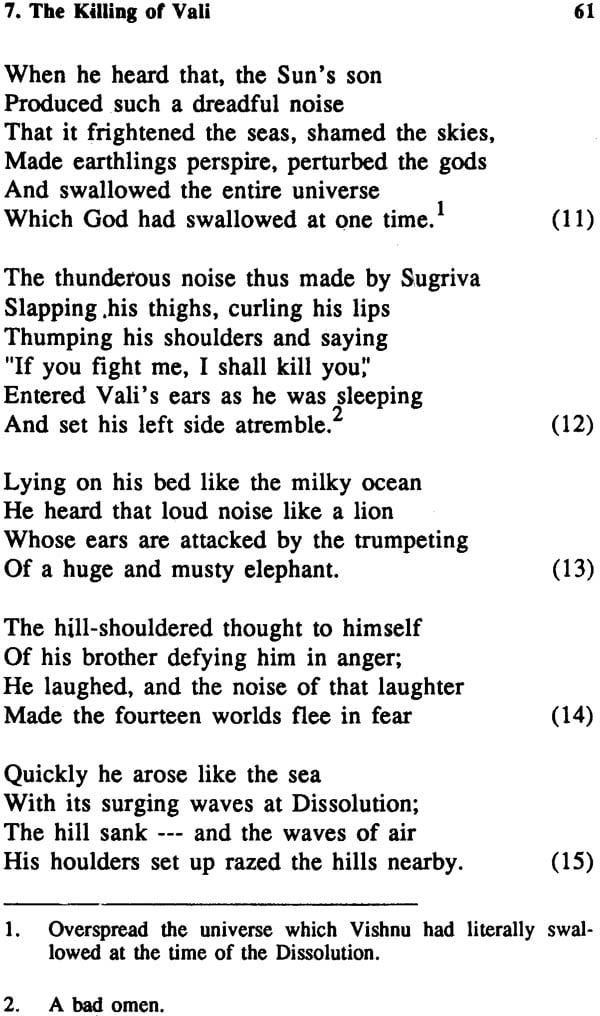 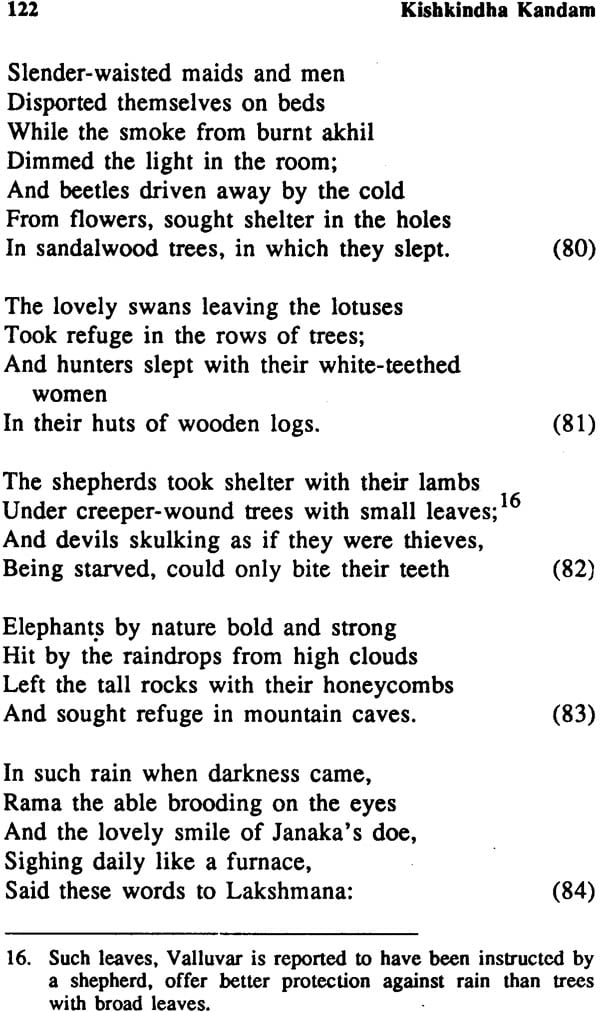 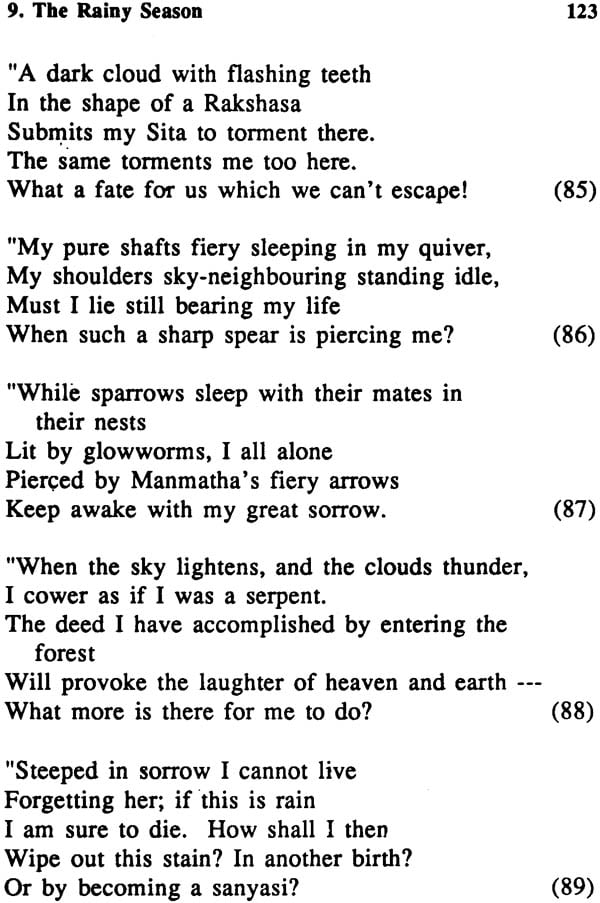 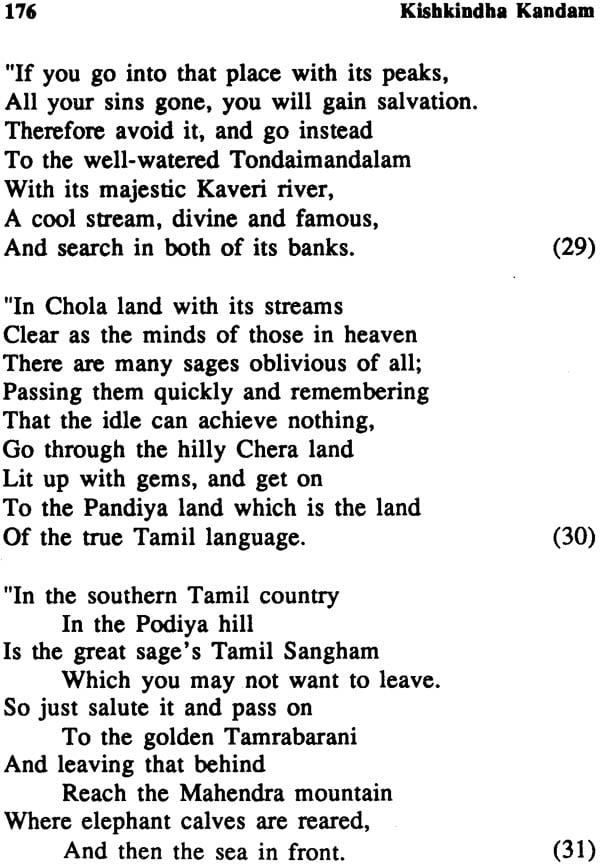 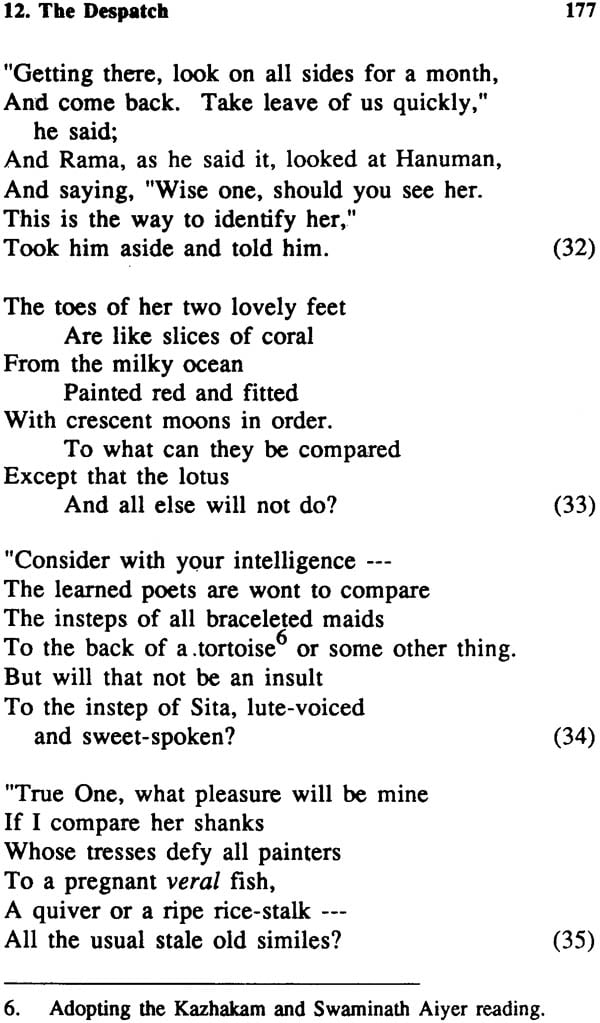 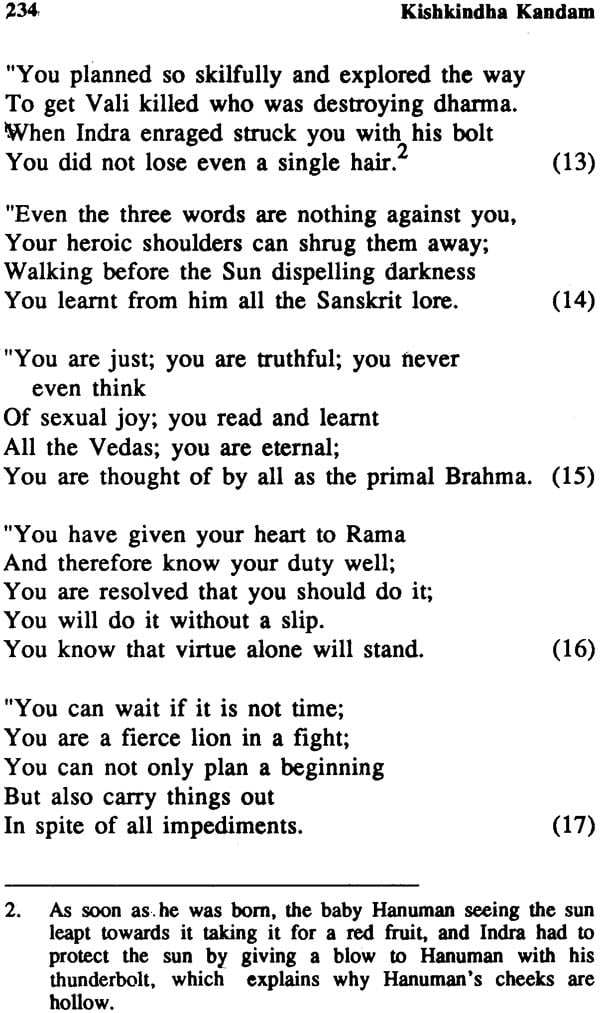 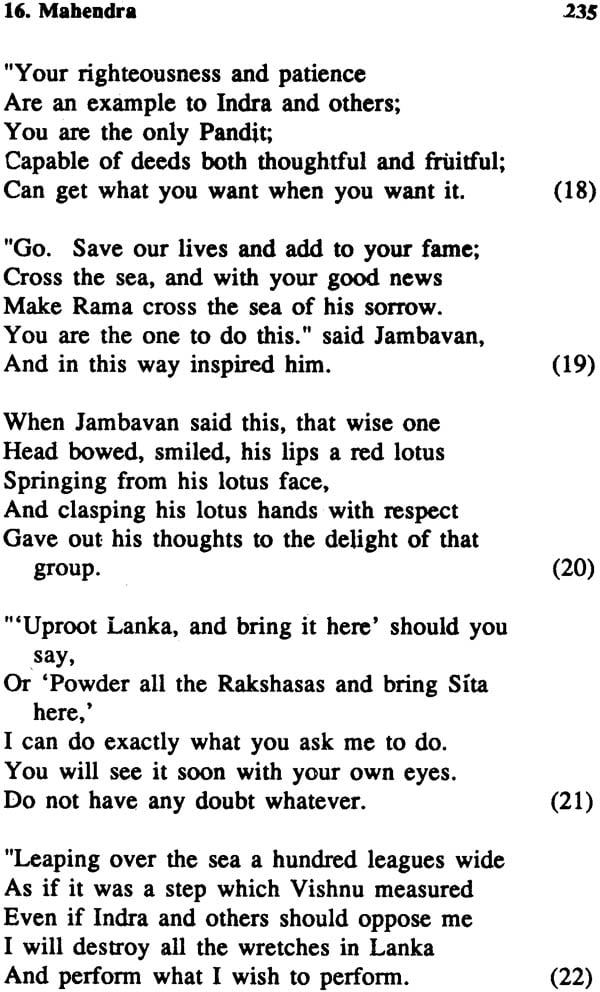 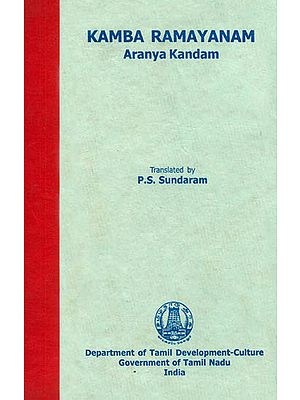 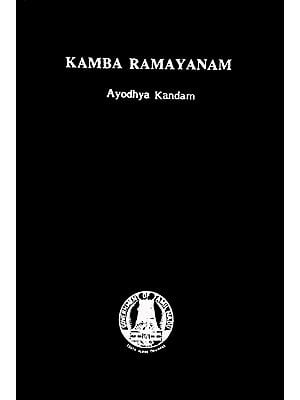 The Ayodhya Canto of The Ramayana as told by Kamban
By Translated from the Tamil by Rajagopalachari
$10.50
$14  (25% off)