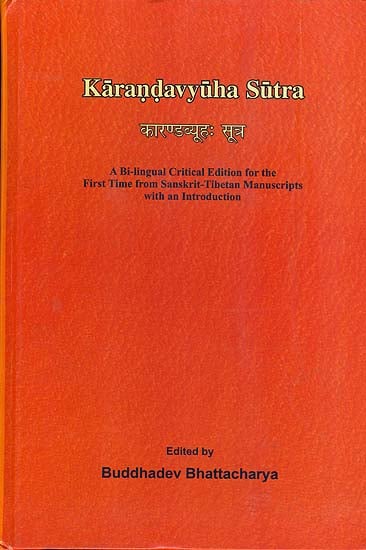 Although the ancient Buddhist literature composed in Pali language is certainly rich, vast and preserves complete canon in original, however, it does not represent the literature of all the branches of Buddhism and is confined to one particular Buddhist sect, namely the Theravada, or one of the earliest representative of Sravakayana. In addition to it other Buddhist texts produced by the followers of Sravakayana and Mahayana were composed in other ancient Indian languages like standard and Buddhist Sanskrit as well as in several Prakrts and exhibited certain new ideas, not traceable in the Pali texts. As most of the texts of several Buddhist schools were composed in mixed and pure Sanskrit and brought to light several new concepts and new religious practices, the analysis of their languages and contents becomes essential to have a clear and complete picture of ancient Indian Buddhism. Prof. Buddhadev Bhattacharya's work on the Karanda-vyuha-sutra is undoubtedly a welcome-step towards the right direction.

It is also essential to note that unlike early schools of Buddhism there existed no Mahayana canon claiming to be a collection of the words of Gautama the Buddha. However, in Nepal the Mahayana tradition pay high respect to nine Dharmas or Vaipullya Sutras and believe that these holy books represent the words of the Buddha. On the basis of the nature of their contents these Mahayana- sutras represent two categories:

1.Prajna-paramita-sutra, the Lankavatara and Ganda-vyuha-sutra are of the nature of philosophical treatises and are the sources for the formulation of the Mahayana concepts of Sunyata and Vijnapti-Matrata. In the matter of religious practice these sutras adopt the Paramita method.

2.The Saddharma PUIJ9arTka, the Sukhavati-vyuha and the Karanda-vyuha are devoted mainly to the glorification of the Buddhas, the Buddha-ksetras and Bodhisattvas. In the matter of religious practice these sutras give more emphasis on the Mantra method and the cult of devotion and have formed the basis for the formation of certain independent Buddhist schools in China, Korea and Japan. Karanda-vyuha has two versions, the earlier one is in prose and the later in verses. The glorification of the Bodhisattva Avalokitesvara, belief in the Adi-Buddha as God and creator in the style of Puranas and the glorification of the protecting and benedictory prayer formula 'Omi Mani Padme Hum' are some of the significant contents of Karanda-vyuna-sutra. Careful analysis of these contents will be undoubtedly very helpful for having a clear view of the historical evolution of many new religious trends in Mahayana Buddhism.

I am sure that present edition of the Karanda-vyuha, being edited by Dr. Buddhadev Bhattacharya together with Tibetan version and critical introduction will be highly useful for students of the literary sources of Buddhist thought. This edition of the Karanda-vyuha-sutra being presented for the first time in bi-lingual (Tibetan-Sanskrit) form, will be highly helpful to the researchers involved in the historical and critical analysis of the evolution of the cult of devotion in the Indian religions, the cult of Adi-Buddha and its counterpart is Hinduism, the cult of Avalokitesvara and the cult of Buddha-ksetras like Sukhavati of Amitabha. It will also encourage further linguistical and historical analysis of the contents of other Mahayana Sutras which is still a desideratum. The Karanda-vyuha, most probably, introduces for the first time the efficacy of famous tantric formula of Om Mani Padme Hum. It is a well-known fact that this formula became most popular in Tibet, Mongolia and some Buddhist schools of China. I am sure the present edition will also help in the clear understanding of the mystic practices of the Mantrayana, particularly its historical evolution, in the light of the contents of the Karanda-vyuha.

The Buddhism, prior to its decline in the land of its origin, developed in India into two chapters, (1) Sravakayana or otherwise called Hinayana and (2) Bodhisattvayana also known as Mahayana. The term Mahayana refers to Bodhisattvayana in supersession to Sravakayana on several grounds referred by Acharya Asanga in his Sutralankara. One of the specific point deferent between the two is that a Bodhisattva attends a higher spiritual state than that of a wayfarer of Sravakayana. Another important point is that the Bodhisattvayana developed independent process of spiritual practice. From this point of view the Bodhisattvayana holds two facts in practice (l) the method of paramita and (2) the method of mantra. These are called respectively paramitanaya and mantranaya. Both these practices are supported by the literary sources of Bodhisattvayana which are classified from different angles in different manners.

In one of most popular Buddhist literary tradition of Nepal, the words of the Buddha are preserved in Nava Dharmaparyaya or nine excellences of truths, also called nine Vaipulya Sutras. But Mahavuitatti enumerated twenty eight Dharma-Paryaya (No. 1279 to 1307)1. Nine Vaipulya Sutras are generally described as follows:


It is also further to be noted that these Mahayana Sutras represent Bodhisattavapitaka, or the canon (Agam) of Mahayena Buddhist tradition.
The Mahayana Sutras are also classified into several categories like
Gandavyuha Sutra

Gandavyuha Sutra, one of the most important vyuha-sutra form the climax of the large text of the Avatansataka Sutras consisting of Gandavyuha, an important Mahayana Sutra. The Avatansaka-sutra was most likely composed in Sanskrit in the 4th century A.D and it was first translated into Chinese by the monk Bodhibhadra in the second decade of the 5th century A.D. The Avatansaka describes the universe as it is seen and experienced by enlightened Buddha and Bodhisattvas, as well as the various stages of a Bodhisattva's progression on the path to enlightenment. In addition to its important position within the Avatansaka, scenes from the Gandavyuha, along with ones from other Buddhist texts such as the Divyavadana and Lalitavistara, can be found among the base reliefs of the great Buddhist monument in Java, Borobudur.

In the Gandavyuha, a young pilgrim named Sudhana commences a search for supreme enlightenment that takes him on a journey to see more than fifty teachers, people from all walks of life and even leads him to an intimate, but nonetheless enlightening, encounter with a prostitute named Vasumitra, who is also a wise Bodhisattva. Sudhana experiences a magnificent cosmological vision, the perspective of enlightened Buddha known as dharmadhatu. Finally, Sudhana attains a vision of the Bodhisattva Samantabhadra and realizes that his own nature, and those of Samantabhadra, all Buddhas, and all other existences in the cosmos are, in fact, one and infinitely interpenetrated into one another.

In this respect the narration of the merchant Sudhana's journeys with his merchandise in different regions of the earth made him a hero of the Gandavyuha on account of his pure conduct. He achieved extraordinary merits. He has a vision of Avalokitesvara, the compassion incarnate. Alike the Karandavyuha, Gandavyuha is also appended by the Bhadracharia pranidhanaraja in which the mannerism of pranidhana in benediction to Avalokitesvara is available.

The Gandavyuha was edited in Sanskrit by Suzuki and later on, the bilingual edition of the text appended with Chinese and Tibetan focus its popularity outside India. Rajedra Lal Mitra in his 'Buddhist Sanskrit Literature in Nepal' remarked:

"A highly amplified version of the works noticed under the name of Guna Karandavyauha. The work is the prose, but it has obviously been amplified from the poetical version above named. The means and incidents have been in some cases modified or changed, and many new incidents and stories have been worked in. But in purport remains the same the glorification of the great Bodhisattva, Arya Avalokitesvara. The differences are not of such a character as to need detailed specification. The work belongs to the class Mahayana Sutra, and as usual in that class of writings, does not bear the name of its author. Its name does not occur in the Rev. S. Beal's Tripithaka.

By the 3rd century B.C. Mahayena Sutras developed in different dimensions. Particularly Ratnakuta Sutraand Avalokitesvara Sutra might claim distinction from Prajnaparamita Sutra, which probably appeared in south India. The Yuha-sutraswere excellent in narrating eminence of the Buddha and Bodhisattvas. In due course the popular Buddhism, among the Mahayana, had a tendency to deal the eminent personifications as the Buddha. In that respect Karandavyauha,s and Gandavyuha, Tathagatavyuha have a lien. So Karandavyauha, along with Gandavyuha are taken in account here.

Date of the Gandavyuha Sutra

In the process of the evolution of the pure Sanskrit (Paninian Sanskrit) from the language of Vedic, the Mixed Sanskrit is the bridge in the development of Sanskrit in north-west India. The Karanadavyuha; may claim an antiquity to the Gandavytihar with authentic. A manuscript of the Karanadavyuha edited by Satyavrata Samasarmi discussed the question about its date. Gautama the Buddha made prophecy that Karandavyuha, would appear after three hundred years of his great demise, Mahaparinirvana, which took place in circa 483 B. C. according to A. L. Basam. Therefore it is highly probable this Sutra might have come in nuclear form by the second century B.C. The second Nirvyuha (part) of the text is referring the six-syllabled mantra Om Mani Padme Hum that probably appeared by the second century B.C. It may be safe to assume that the text shorter in gatha with the dharma-skandhas might be compiled by the early Christian period. The text was translated into Tibetan by the 8th century A.D. when the eminent La cha ba, Tibetan translator Ye shes sde rendered it into Tibetan. Prior to that the book was translated into Chinese in different names since 3rd century A.D. to the 4th century A.D. 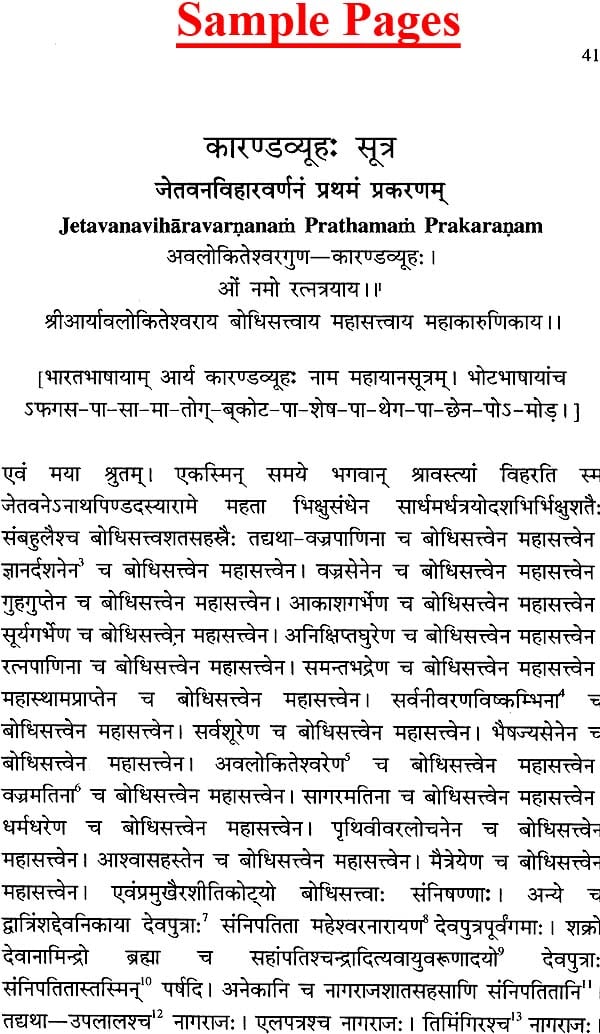 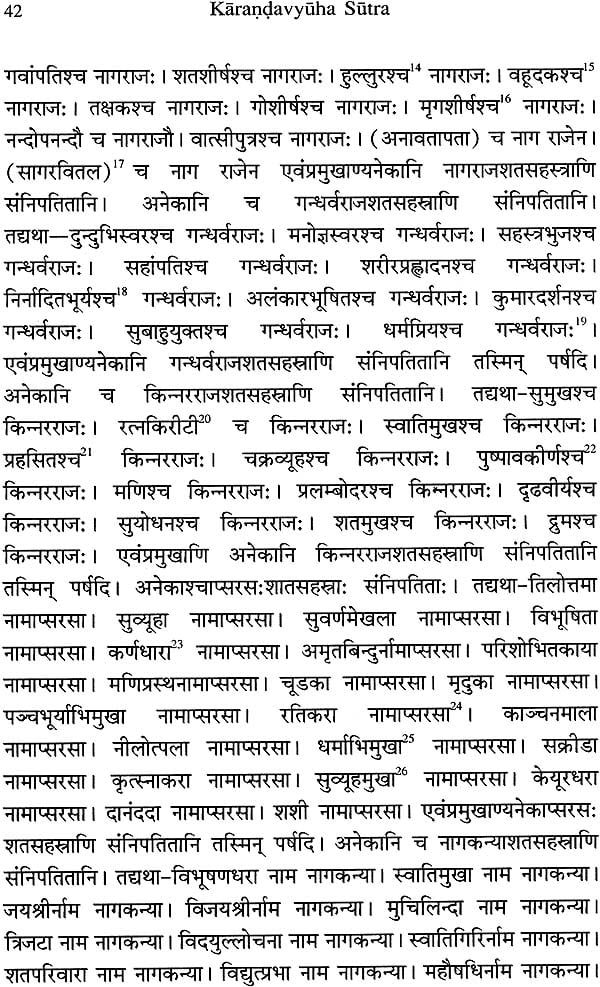 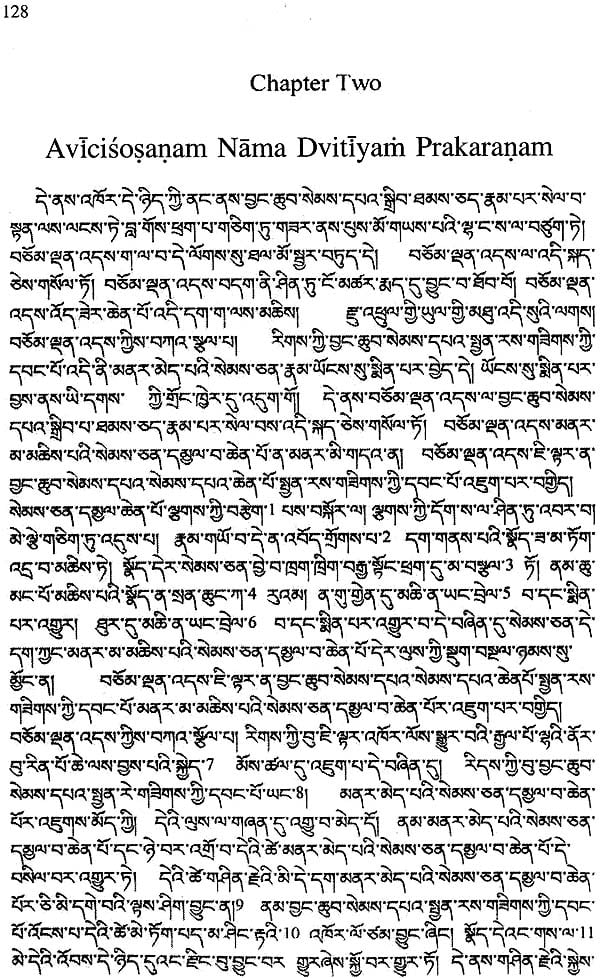 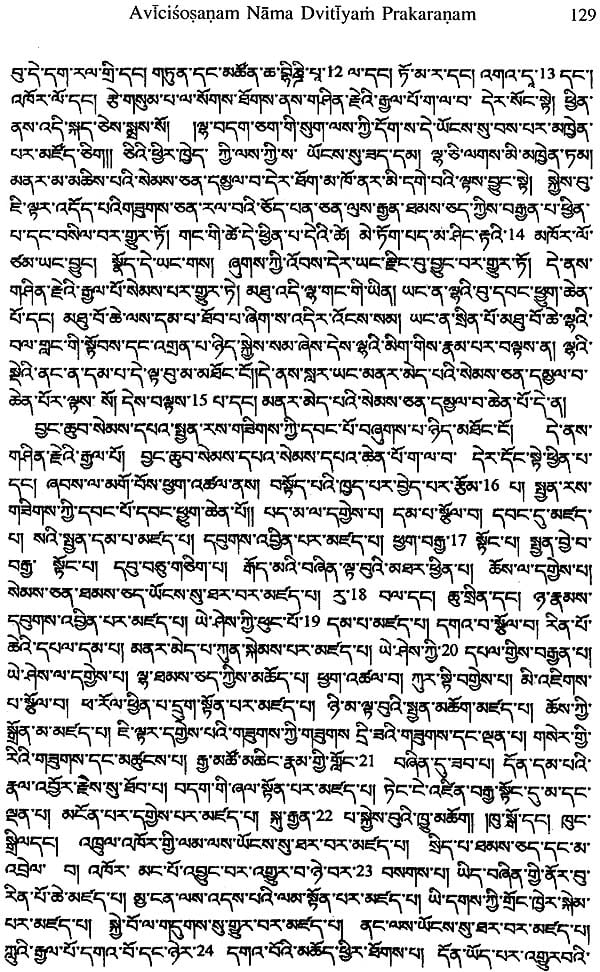 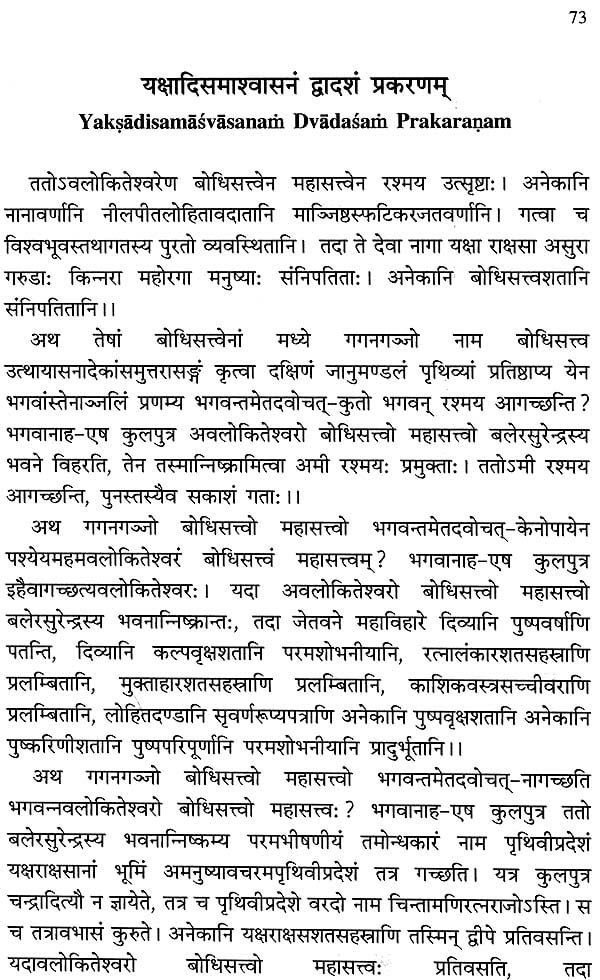 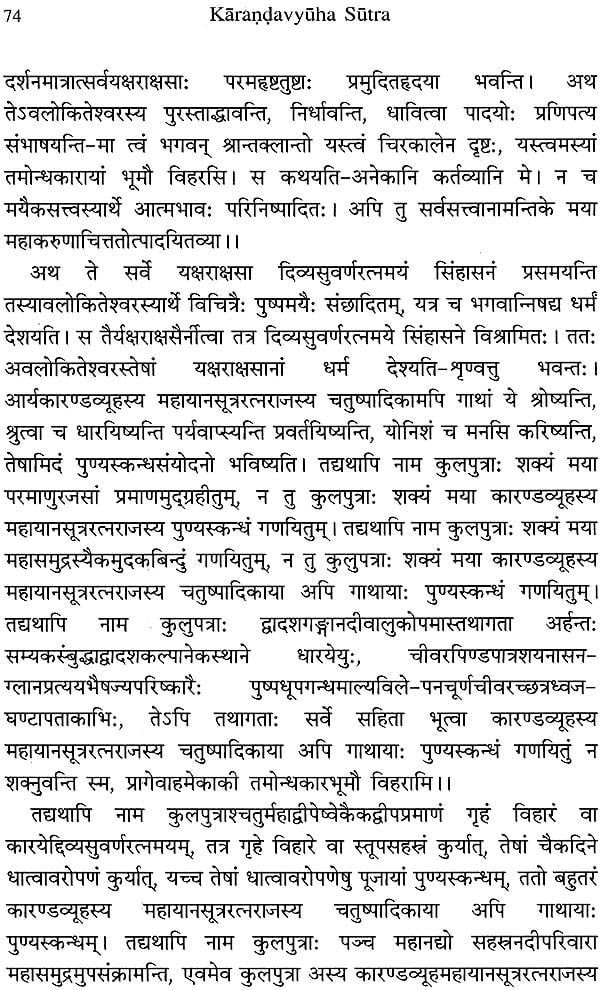 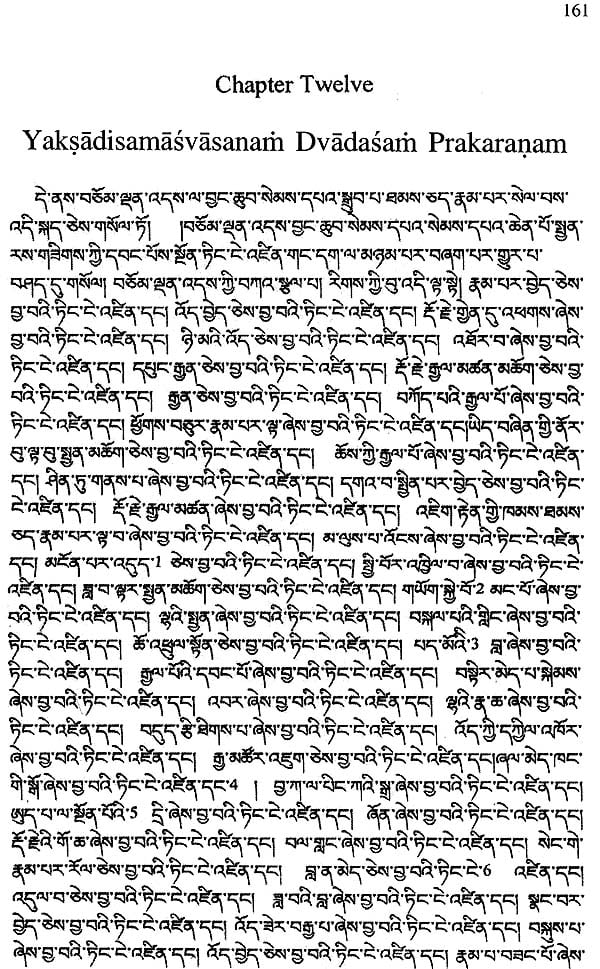 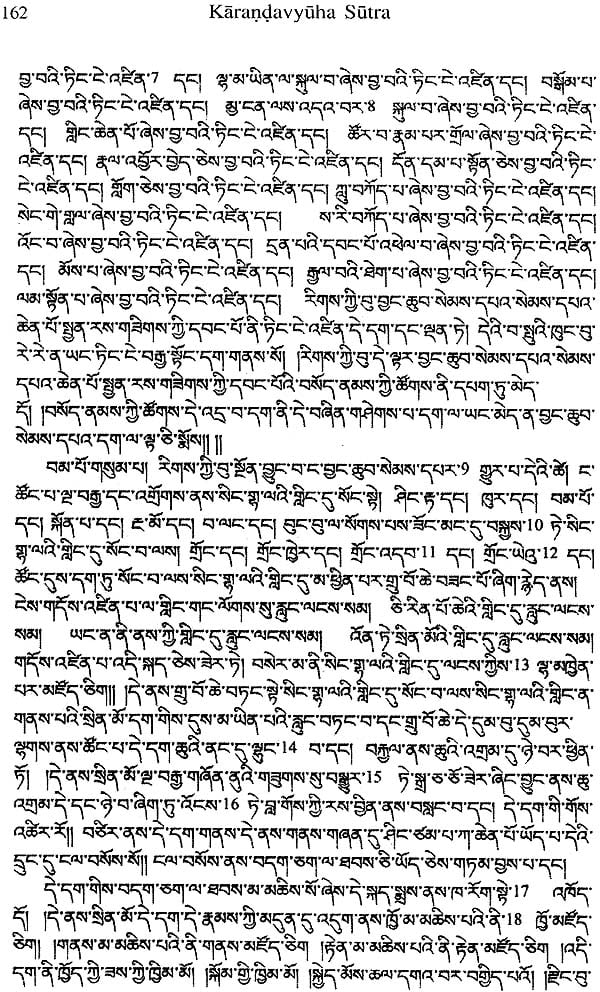 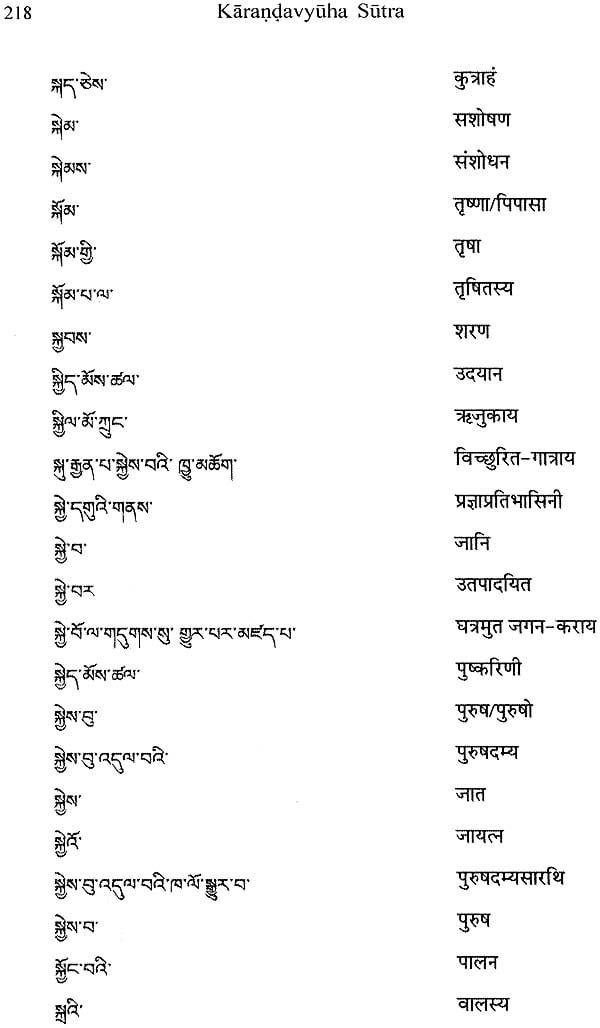 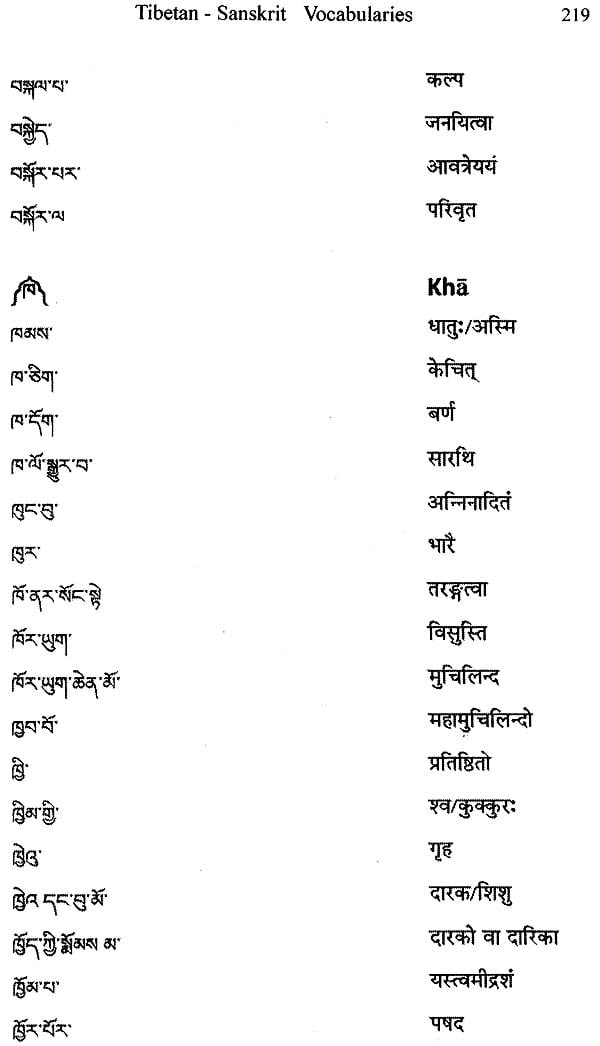 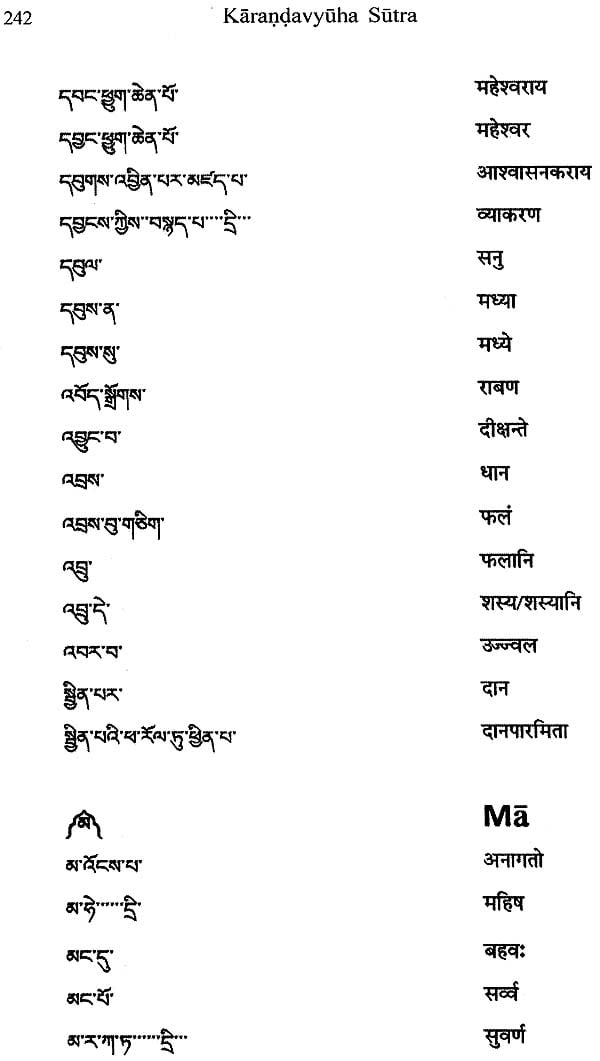 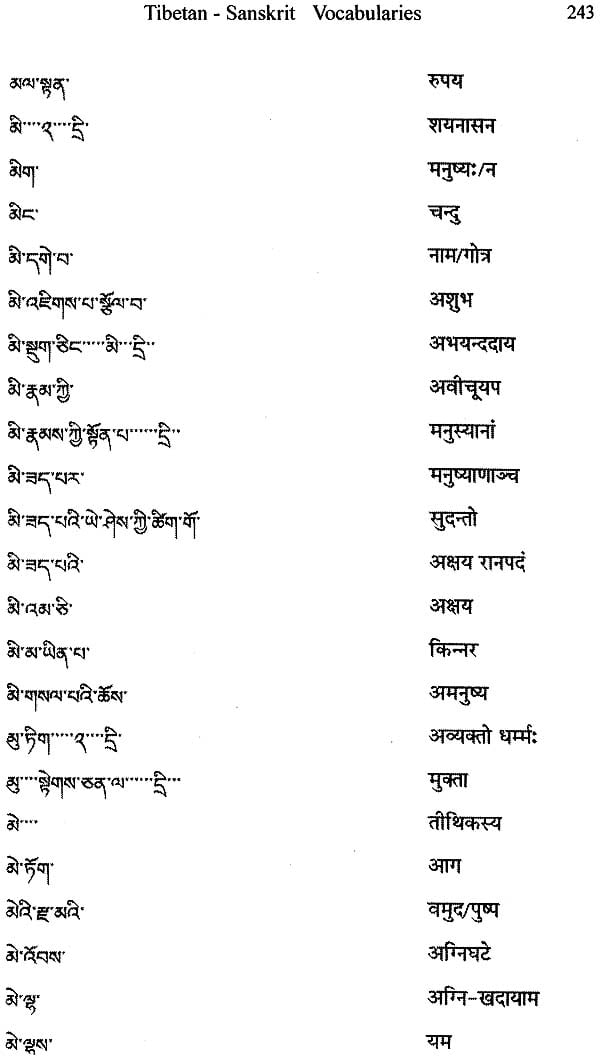 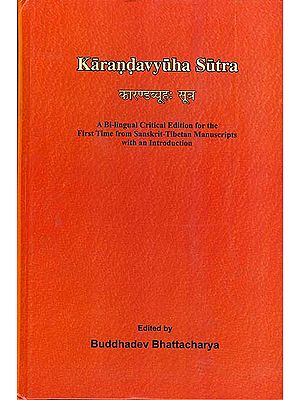 Karandavyuha Sutra (A Bi-lingual Critical Edition for the First Time from Sanskrit - Tibetan Manuscripts with an Introduction)
By Buddhadev Bhattaharya
$30.75
FREE Delivery
$41  (25% off)
Add a review
Have A Question