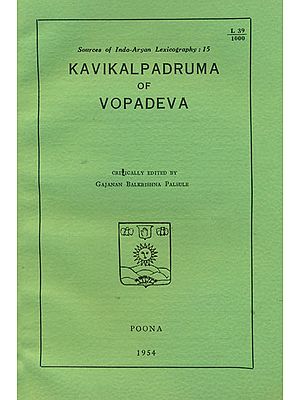 Kavikalpadruma of Vopadeva - Sanskrit Grammar (An Old and Rare Book) 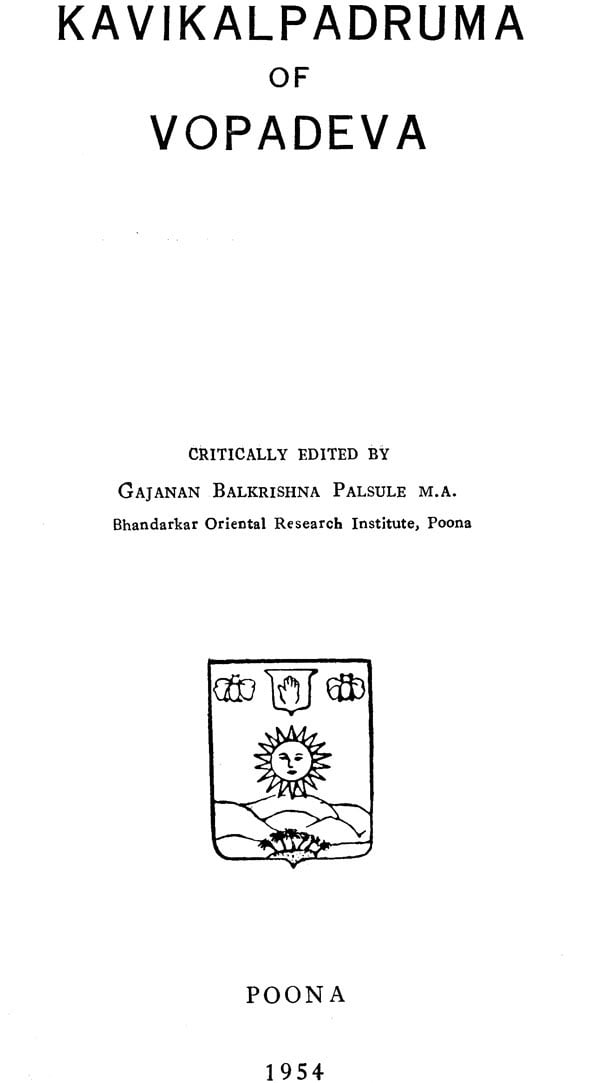 Three years ago, during the course of my study of the Sanskrit Dhatupathas for the degree of Ph.D., I felt the need for a good edition of the Kavikalpadruma. No printed copy was then readily available and so I had to put together my own working copy by means of two of the MSS. in the Govt. collection of MSS. deposited at the Bhandarkar Oriental Research Institute. When it came to the notice of Dr. S. M. Katre, under whose guidance I have been studying, he suggested that I should bring out a critical edition of this work. I took up the suggestion and the present edition is the outcome of the work that I have been doing for the last three years. How far it is successful is for the scholars to judge.

Vopadeva belongs to the later generations of the originators of the more important schools of Sanskrit grammar. He had thus an opportunity to benefit himself from the works of his predecessors-an opportunity which he has fully utilized. He had also a catholic attitude and in his collection of roots he has leaned more on the side of liberality of inclusion than on the opposite. Consequently his work represents the whole body of Sanskrit roots as it had been accumulated and passsed on from generation to generation. To this he has added his own contributions. Kaoihalpadruma has thus become a grand thesaurus of Sanskrit roots. It is also unique from the point of view of arrangement of roots, since Vopadeva was the first to arrange the entire Dhatupatha according to the alphabetical order of the final letter of the roots. The publication of a critical edition of such a work was therefore necessary-all the more so when the current editions of the Kavikalpadruma, all of them printed in Bengal, give only the text as it was known in Bengal-what may be called the Eastern Version of the Kavikalpadruma-without, as a rule, mentioning a variant reading. The critical edition, apart from having unearthed some hundreds of variants, gives the text based on what we may call the Western Version, which is both older and more reliable. Lastly, in the Critical Apparatus I have quoted profusely-rather too profusely-from all the three available commentaries, since at places the text is very terse and cannot be understood without the aid of commentaries.

My first and foremost thanks are due to Dr. S. M. Katre who kindly undertook to publish this work in the Sources of Indo-Aryan Lexicography Series. He also made available to me some rare books, took a keen interest in the progress of this edition, made some very valuable suggestions and all along has been very encouraging. To Prof. P. K. Gode also I owe a very deep debt of gratitude. As the Curator of the Bhandarkar Oriental Research Institute he (and his obliging assistant Shri S. N. Savadi) allowed me a free use of the MSS. library for this protracted period. He has also greatly obliged me by procuring for me a number of MSS. from other libraries, which, but for his influencial agency it would have been very difficult for me to obtain. He also gave me valuable advice and in general directed my research activity through proper channels. Dr. B. J. Sandesara of Baroda was kind enough to furnish information on some place-names in Gujarat for which he deserves my thanks. I am similarly obliged to the authorities of the following institutes who kindly either lent their MSS. or provided a Photostat copy or a transcript of their MSS.: Bhandarkar Oriental Research Institute, Poona; The Asiatic Society of Bengal, Calcutta; The Library of the University of Bombay; The Government Sanskrit College Library, Banaras; Sarasvati Mahal Library, Tanjore; and the Library of the India Office, London.

The credit of compiling the Index of Roots (which constitutes Appendix I) goes entirely to Mrs. Kusum Dixit, B. A. She voluntarily undertook to prepare the index and executed the task efficiently, for which I offer her my sincere thanks.

Lastly, I must not forget the Manager and the Staff of the Samarth Bharat Press. In spite of the highly technical and the exacting nature of the work they have made a neat job of it as the reader will see for himself. They therefore deserve my heart-felt thanks. 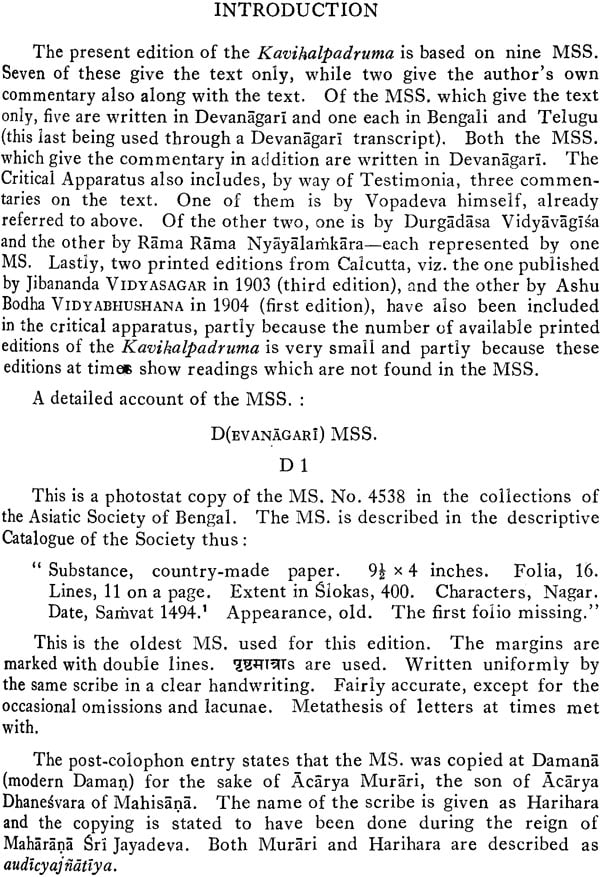 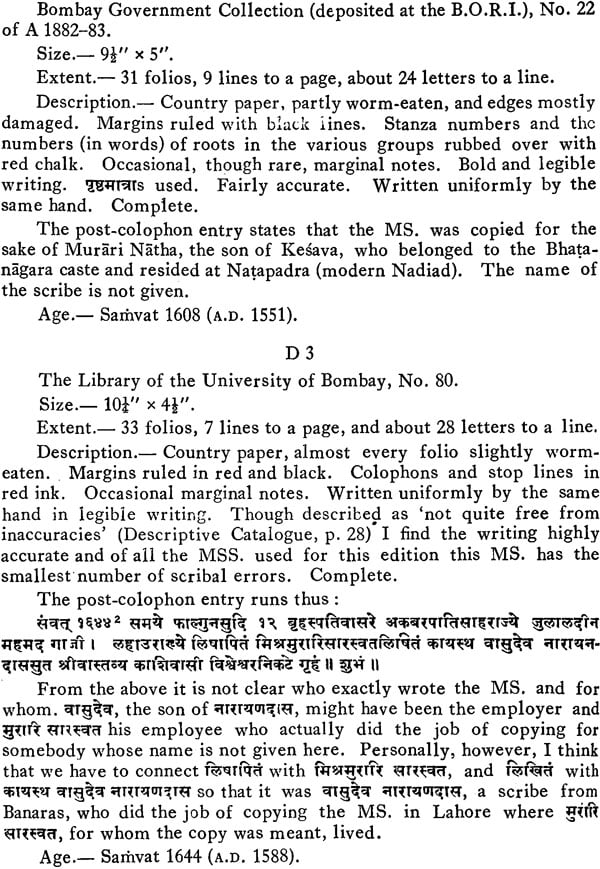 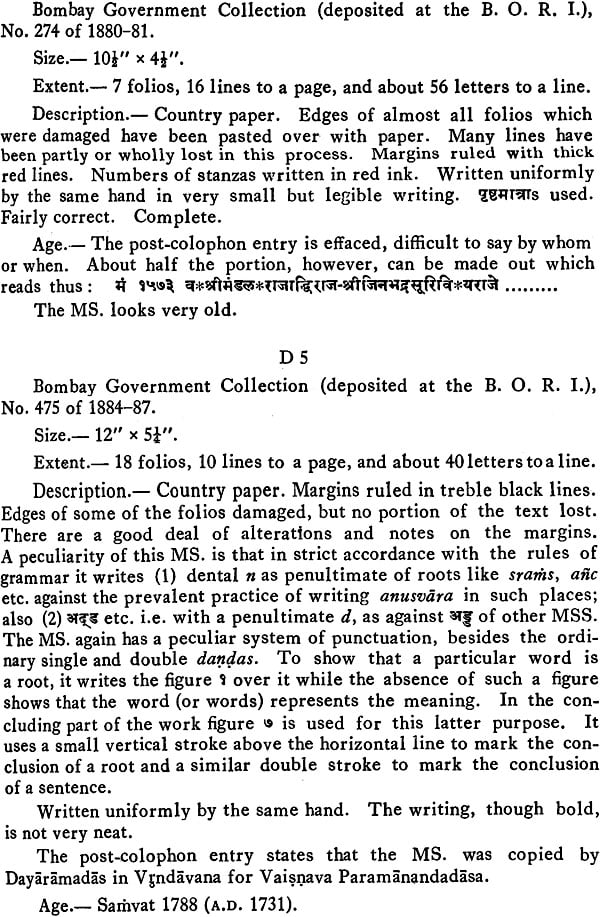 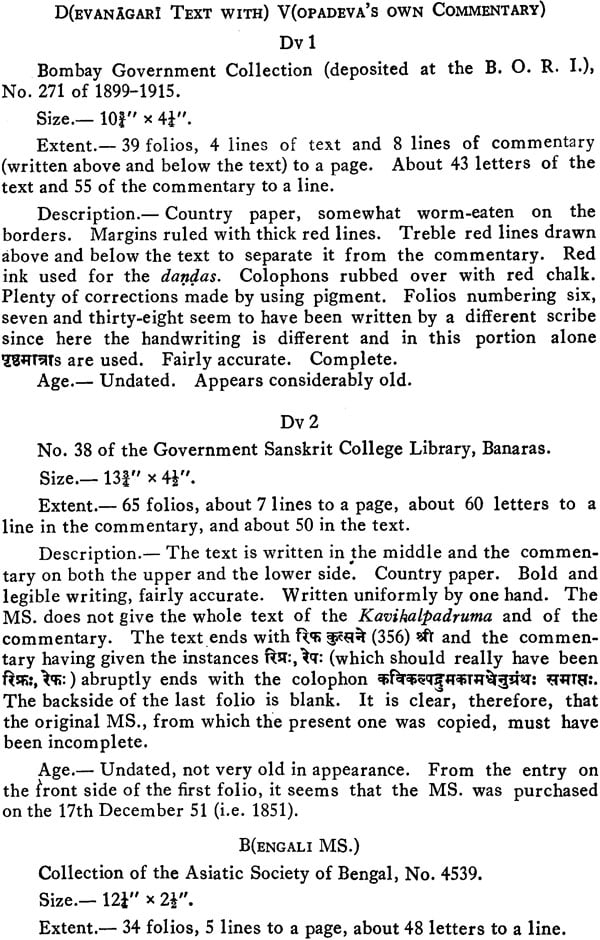 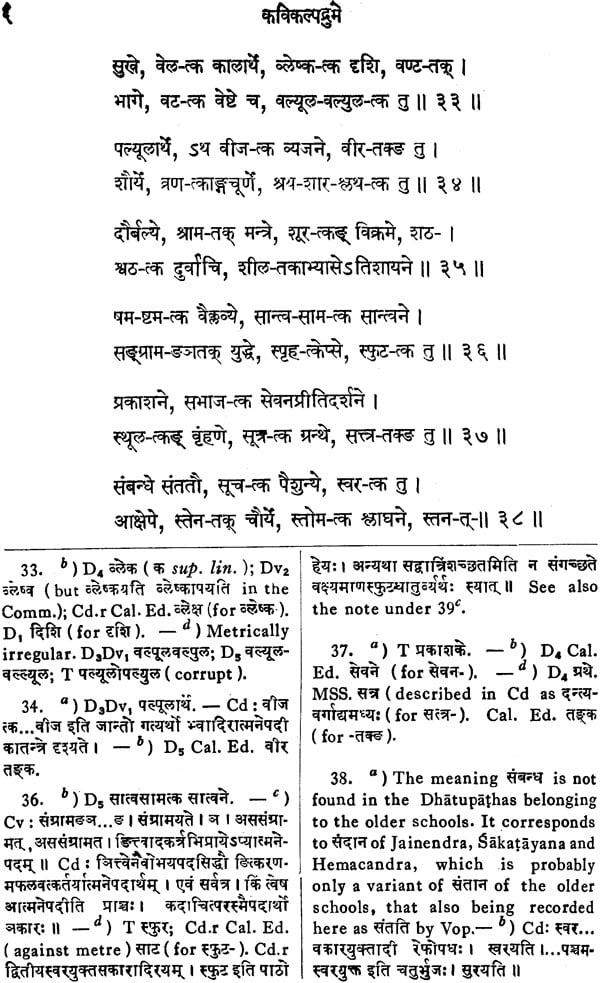 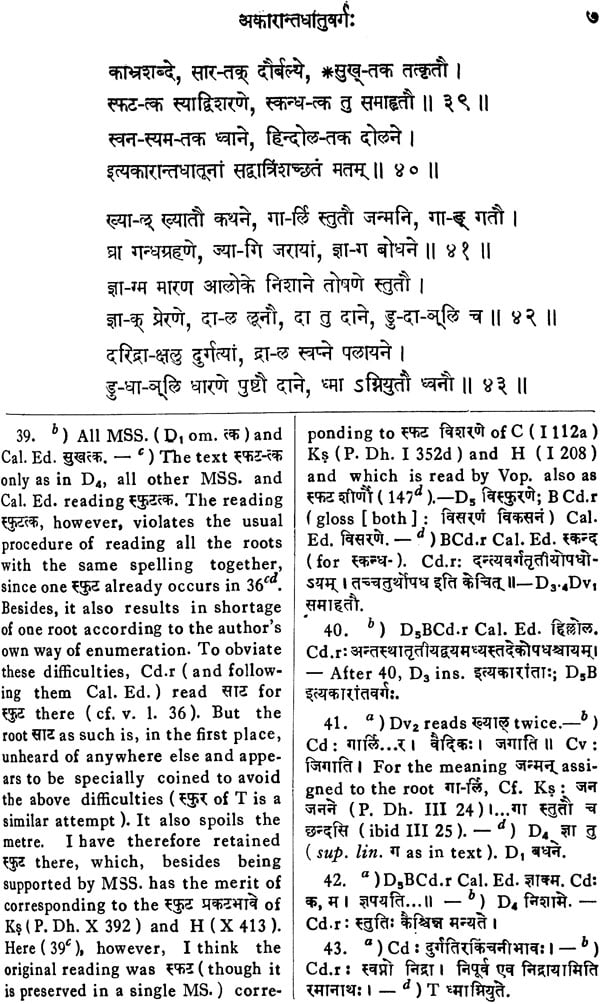 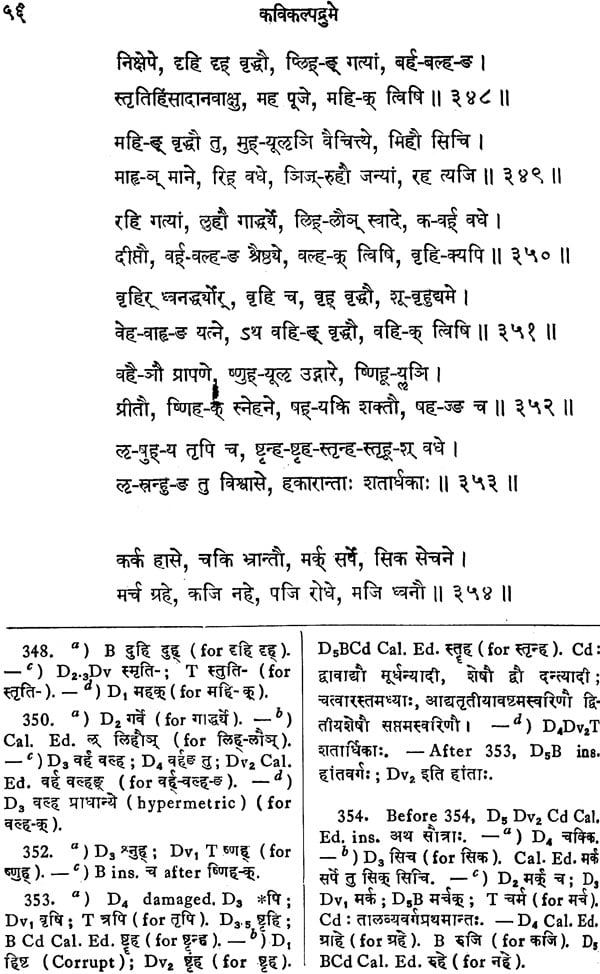 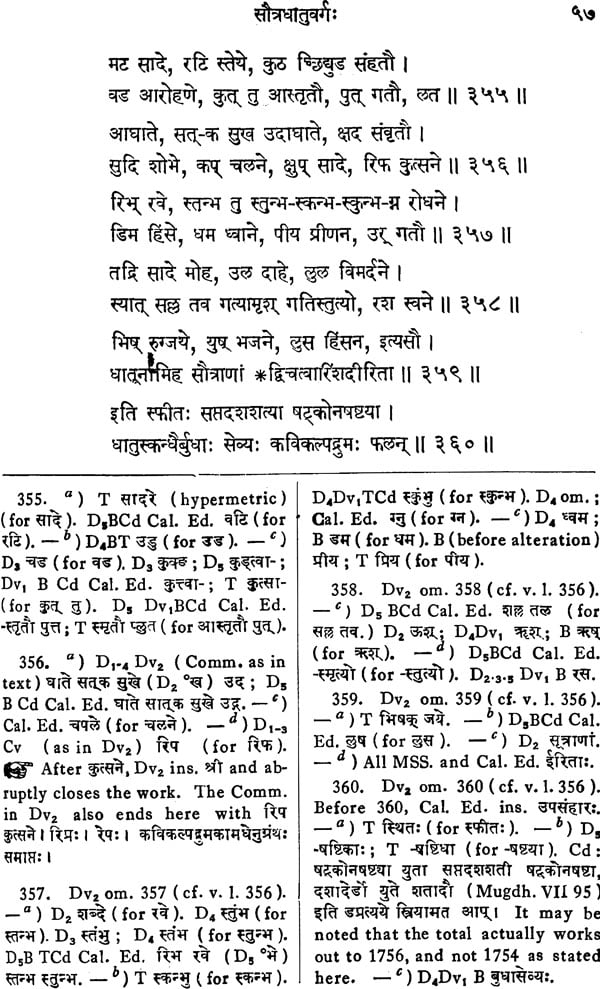 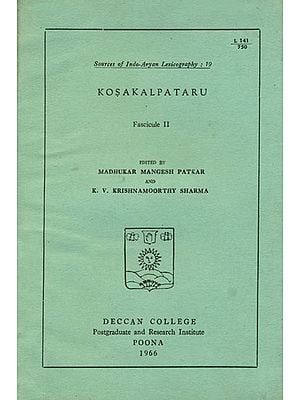 Kosakalpataru - Sanskrit Grammar (An Old and Rare Book)
By Madhukar Mangesh Patkar and K. V. Krishnamoorthy Sharma
$52
Out of Stock 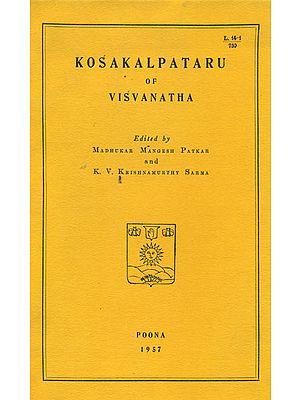 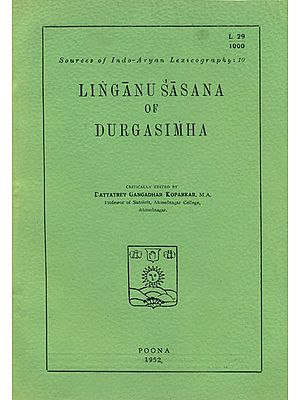 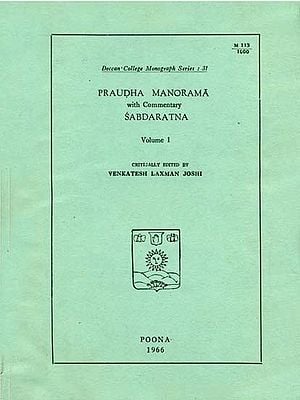 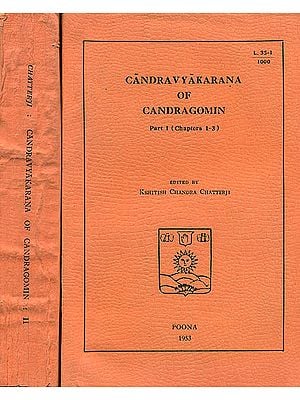