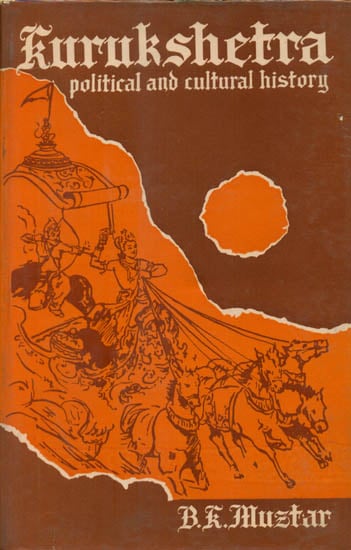 Since times immemorial, Kurukshetra has been revered as a spiritual heaven in all Hindu scriptures, It has been held in high esteem as a great religio-cultural centre, a holy land blessed with divine benediction. Its founder, the King Kuru, was surcharged with a profuse passion to make the body of this region abounding in eight virtues truthfulness, austerity forgiveness, compassion, purity, charity, composure (yoga)and continence (brahmacharya). King Kuru’s efforts to create a virtual heaven on earth in Kurukshetra were, however, foiled by an envious Lord Vishnu. The dying King begged of the Lord to name is land as Dharamkshetra where Lord Vishnu along with all of His gods stayed for ever to bless and guide the destiny of the people to good deeds and righteousness. His pious wishes were shaped into a consummate reality, and Kurukshetra with its 360 tirthas (holy places) has become a pilgrims’ covetted Paradise.

Starting with the delineation of Kurukshetra as a venerable place of pilgrimage of great religio-cultural significance, this study is largely devoted to the exploration and systematic investigation of its socio-political character since prehistoric times to the yester-year of year of 1976. Covering the march of Kurukshetra history and society through several millenia is a formidable task in itself. The author has put in stupendous efforts in remarkably condensing a vast vista of socio-political history of Kurukshetra into a highly informative monograph. The study is throughout richly documented with the sources that have been scanned and re-examined from a new angle.”As a result, Kurukshetra came to enjoy peace, prosperity and honour, it became a heaven on earth. The combination of manula labour and moral rectitude, physical exertion and spiritual elevation became the essence of this region and through it of the whole country.”

Balkrishna Muztar was born on 2nd October, 1921 at Thanesar, Haryana. While yet in teens, he gave up his studies in 1938 to join the national freedom movement. Since independence he has been closely associated with the socio-religio-political life of Punjab, Haryana and Delhi. At present he is a well-known figure on the political and literary horizons of this region.

Recently he has switched on to give expression to his incessant passion for socio- historical studies. Among his recent works are: Kurukshetra-Ek Sanskritik Adhayayan (Hindi); Ek Rajasthan (Hindi); and Kurukshetra Darshan and Zafarnama (Translation).

Mr Muztar is presently engaged in writing his own memoirs.

It was in the year 1965 that I wrote a book in Hindi on the history and importance of Kurushetra at the suggestion of Shri C.P.N. Singh, the then Governor of Punjab. The book was received very well by the scholarly world and the general public. This was, I suppose, more due to the greatness of the subject which I had handled rather than my competence or scholarship.

Many of my friend and also readers pressed me to produce the book in English too. But since I was kept awfully busy these days by my extra-academic pursuits, I could not snatch an opportunity to fulfil the wish of my friends and learned readers. Last year, however, when some scholars raised a controversy over the historicity of the Mahabharata war in the national press, my friends goaded me to do the book in the English at once. I could no longer put them off and surrendered.

For doing the chapter on the historical importance of Kurukshetra, I have derived maximum help from the writing of Dr R.C. Agrawal, Jaipur; the problem of the date of the battle of the Mahabharata which baffled me for quite some time was resolved with the help of the masterly exposition of this subject in his writing by the great scholar Mm. V.V. Mirashi, Bombay; I have been benefited a good deal by scholarly identification of ancient sites in the region of kurushetra by Dr S.R. Phogat, kurukshetra; and for doing the modern period, I have taken immense help from the writing of Dr K.C. Yadav, Kurukshetra, I express my gratitude to these great scholars.

I am also thankful to pandit Bhagwat Dayal Shama, Governor of Orissa,for his kind interest in the work and also for his valuable suggestions. My thanks are also due to Shri K.S. Dalal, Librarian Kurukshetra University Library, Kurukshetra who was of immense help to me at every step; and to my friend Shri H.H.N. Bhatnagar, Kurukshetra who typed the manuscript so accurately, and to the publishers for publishing it so neatly.

Kurukshetra occupies pride of place in history of India. It is a holy land where millions of people have been coming from time immemorial spurred by a religious motive and a burning faith in the sacredness of its soil. It is the cradle of Indian civilization, tradition and culture.

It is an irony if fate that holy Kurukshetra had no Thucydides or Tacitus who could have left for posterity some historical account concerning its lift and conditions. In later times, however, efforts were made to supply some information for the reconstruction of his history. The first notable attempt in this direction was made by a scholar named Banamali Mishra in the sixteenth century. Taking his materials from the Manusmriti, Mahabharata and Puranas, he wrote a treatise entitled Kurukshetra Mahatmya. Unfortunately, Banamali ignored the geo-historical contents of his materials and presented only a religio- cultural picture of Kurukshetra. His book therefore, is a sort of directory of the holy places in this region. A little later, another scholar , Ramachandra Sarasvati, wrote a more detailed book on Kurukshetra bearing the same name. Ramachandra was considerably attracted by the holy tirtha and he had set out to visit it with the fullest devotional intent, but he says that in the book, he actually wrote only about those tirthas which gave him their darshanas and told about their locations, etc., in his dreams. It seems, that he could not visit all the tirthas properly and that is why several tirthas have not been identified by him correctly.

There does not seem to have been any literary work on Kurukshetra for quite sometimes after Ramachandra Sarasvati’s book. In 1855, however, one Kale Raj, Extra-Assistant Settlement Officer, Thanesar, broke this silence. He wrote a small book, Kurukshetra Darpana containing 94 pages in Urdu. In this book, aspects of Kurukshetra history other then religious and cultural were described for the first time. But these were general and hazy descriptions. In 1890, some improvement was made on Kala Raj’s attempt by Inayat Ali Thanesari. He wrote a book in Urdu entitled Tarikh-i-Ibrat Amal Thanesar ka Kamal-o-Jawal. Since the author was not trained in historical methodology, his approach is like that of a fiction writer. Hence, the book is interesting, but not always factually correct.

For some decades thereafter no any concrete work was done on Kurukshetra. In 1923, Pt. Gajanan entered the field and wrote a book, Prithudaka Mahatmya. The author collected shlokas pertaining to the importance of pehowa from the Puranas, etc., and retained them with their Hindi equivalents. It is an ordinary work by all standards. In 1927, another Pandita, Chuni Lal produced a brief treatise entitled Kurukshetra Mahatmya. The author does not seem to have taken any help from the earlier works. He merely put forth relevant materials culled from the Mahabharata and the Vamana Purana in simple Hindi. His book is therefore of little use to serious scholars.

Meanwhile, Girdhar Dass, the son of an inhabitant of a village in Kurukshetra produced a book on almost similar lines, wherein he has written, in addition to the other tirthas, on the religious sanctity of Kurukshetra. According to this author there were 275 tirthas in the 37 village of Kurukshetra.

In 1928, the North-Western Railways had a 20-page book published on the occasion of the solar eclipse. Its title is Kurukshetra aur Suryagrahana. Based on puranic data, the book gives the religious importance of Kurukshetra on the solar eclipse. Two years later, Dayali Ram wrote Kurukshetra Darpana athva kurukshetra ke mashur tirtha ka Guide. It is a small book in Urdu which gives very brief description of the important places of pilgrimage.

For about two decades, thereafter nobody appears to have done any work on Kurukshetra. The nineteen fifties, however, produced several attempts. In 1954, M.P. Sud wrote a 66-page book, Kurukshetra ka atita aur vartmana in Hindi. After establishing the ancient glory of the tirtharaja on the basis of the Puranas and Mahabharata, the author gives its medieval and present situation very briefly. The style of presentation is dull and all the facts are not correct. 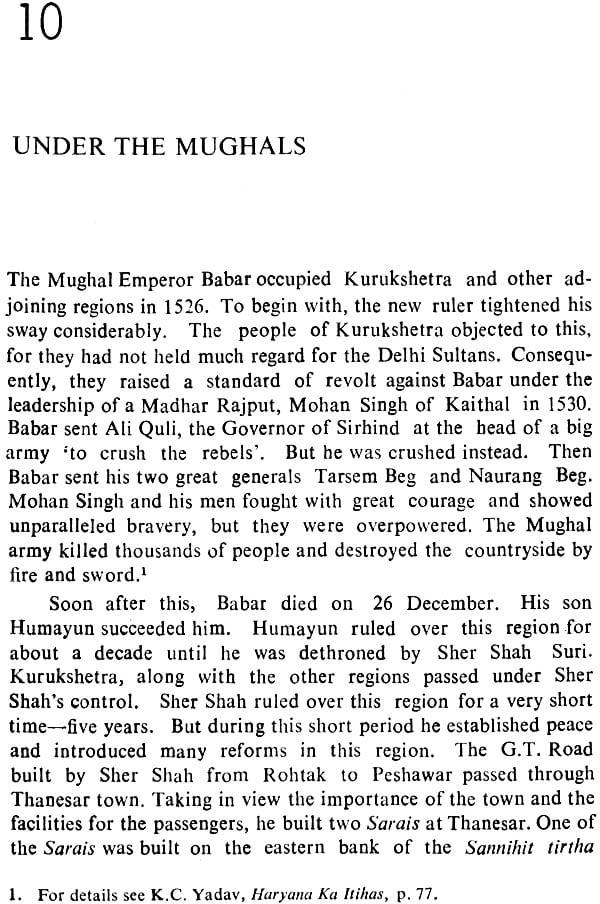 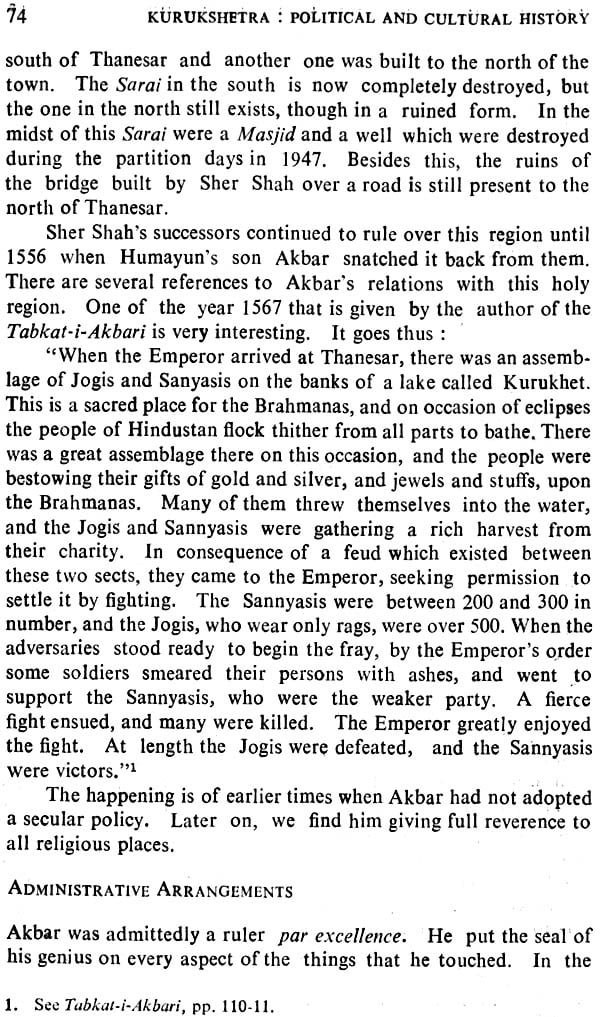 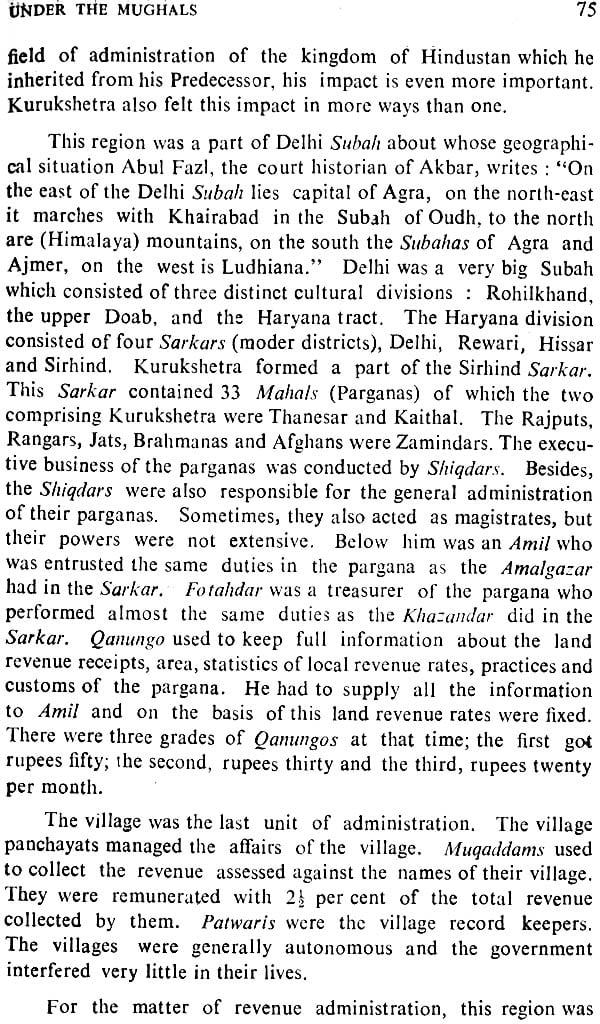 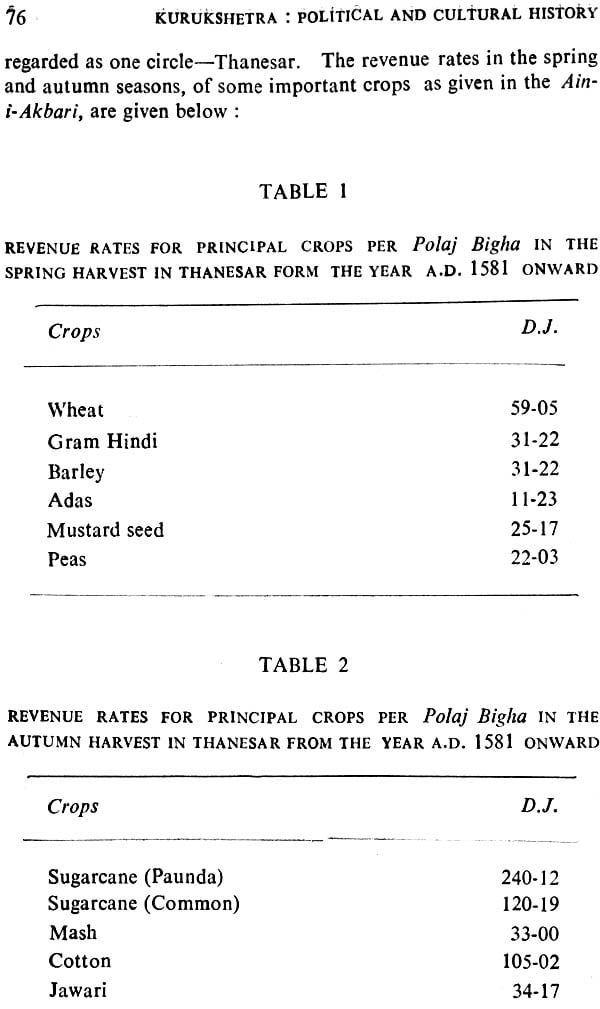 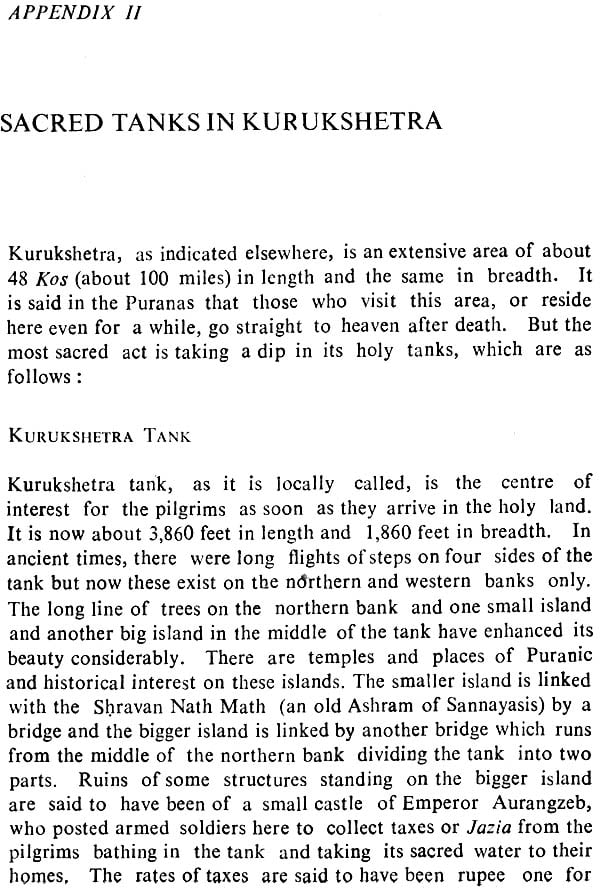 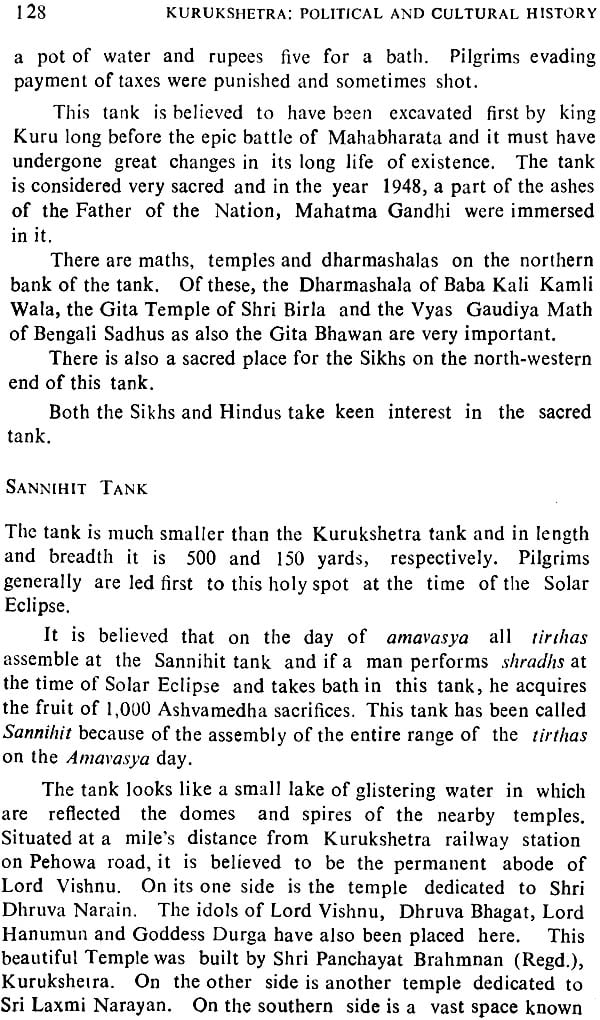 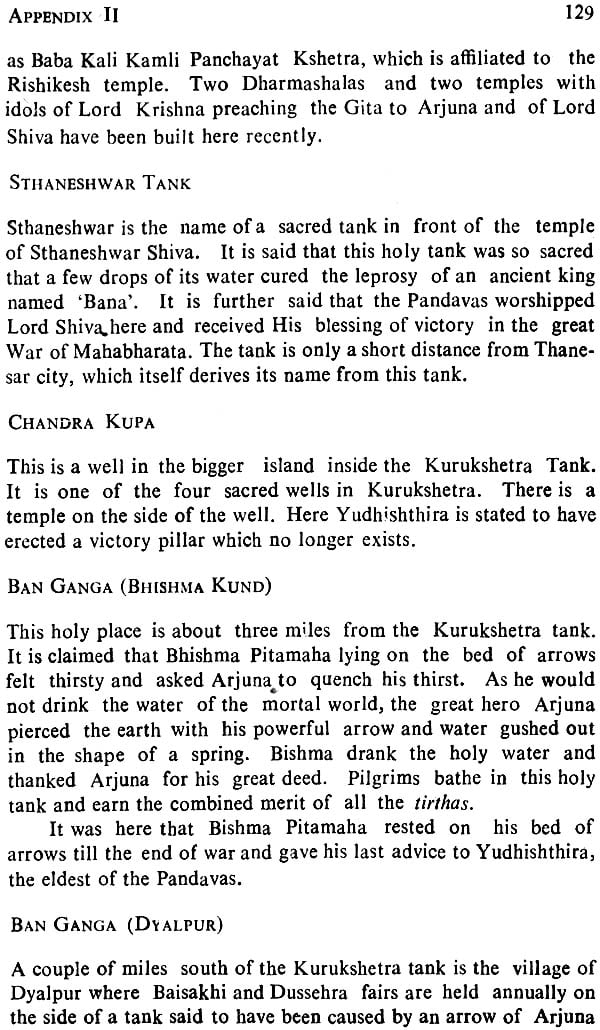 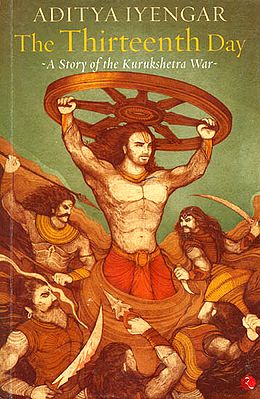 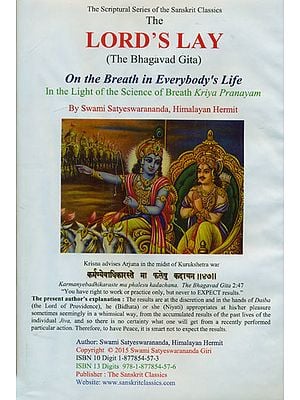 The Lord’s Lay: The Bhagavad Gita (On The Breath in Everybody’s Life)
By Swami Satyeswarananda, Himalayan Hermit
$30.75
FREE Delivery
Best Seller
$41  (25% off)

The Conception of Bhakti in the Gaudiya Vaisnva Philosophy
By Santosh Gupta
$25.50
FREE Delivery
$34  (25% off) 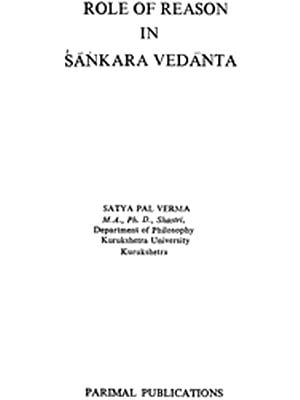 The Rgveda - Interpreted and Translated with a Review of Important Interpretations Ancient and Modern (Vol-III)
By Ram Gopal
$24.75
FREE Delivery
$33  (25% off) 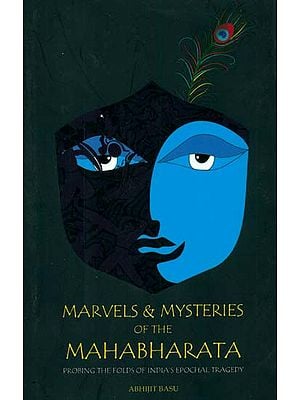 Concept of Jatavedas in Vedic Literature
By S. Mahapatra
$18.75
FREE Delivery
$25  (25% off)
Add a review
Have A Question