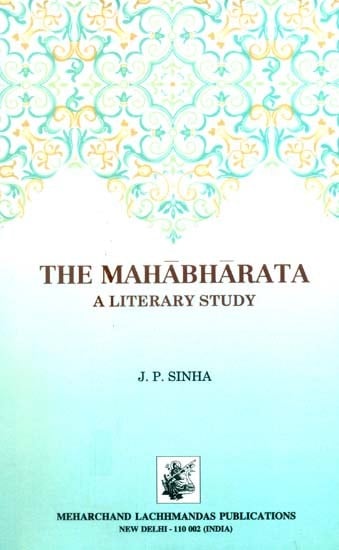 I have read this small, but interesting book. Much has been written about the Mahabharata, in big volumes, in various European and Indian languages, but the present work, as the title shows, is a study of the Epic from the literary point of view. The author begins by saying something about the metres used in the Epic and here many of his observations are based partly on the Suvrttatilaka of Ksemendra and partly on his own observations. He is sensitive to the impressions which verses written in particular metres make on us when we read them and knows to use them for their esthetic assessment. He is fully aware that the Epic is full of sabdalankaras and arthalankaras and in his observations on them and other literary features, he is first of all guided by the Dhvanyaloka of Anandavardhana and then by the Vakroktijivita of Kuntaka. In a small section entitled "Points of Style", the author says a few words about the laksandvyapara to enhance the effect of the poem. He also points out the use of the dialogue method borrowed from the Vedas to enhance literary and didactic effect. He has picked out the Yaksaprakarana dialogue to show that "the poet of the Mahabharata has used the dialogue style only when he has to convey, though indirectly, some deeper sense which cannot be conveyed in an ordinary manner." (p.96)

Though small in size, this work can be a guide for a detailed and deep study of the Mahabharata. I hope it will find enough readers to take advantage of it.

The object of presenting this literary study of the Mahabharata is to examine the great Epic poem purely from the literary point of view without getting involved in the controversies regarding its authorship, date, authenticity etc. These latter topics have been dealt with at length by Indian as well as foreign scholars, the chief ones among whom are C. V. Vaidya, Winternitz, Macdonell, Keith and a few others.

In the present context, however, it will not be out of place to give by way of introduction a brief resume of the traditional view regarding the Mahabharata's authorship, development and extant.

According to the traditional view, the Mahabharata was composed by the sage Krsna Dvaipayana Vedavyasa in the beginning of the Kali age. It is said that after Vedavyasa had composed the Great Epic, the sage Vaisampayana, acting on the latter's instance, narrated the same, dividing it into as many as one hundred sub-parvan-s, before Janamejaya on the occasion of the Serpent-sacrifice performed by him. It is further averred that later on Ugrasravas divided the same into eighteen main parvan-s and recited it before the sages assembled at Naimisaranya. Scholars hold divergent views regarding the number of verses that have formed part of the Mahabharata. According to one set of scholars there were three successive recessions of this great poem. They believe that the first recession contained twenty four thousand verses and in support of this view they cite the following verse of the Mahabharata itself:

Sauti and Saunaka. They hold that it is this third recension which is now extant and is known as the Mahabharata, The orthodox view is quite different from this. According to that view, the Mahabharata originally contained one lakh verses and was dictated by Vyasa to Ganesa, the scribe, who put the same into black and white. The holders of this view support their contention by citing the following other verse again from the Mahabharata :

i.e., 'sitting constantly at work Krsnadvaipayana completed this narrative, known as the Mahabharata, in full three years' and argue that if the number of verses had not been one lakh then a poet like Vyasa with a scribe like Ganesa would not have taken so much time in composing the whole thing.

The importance of the Mahabharata has been emphasised from the earliest times. It has been treated as a very comprehensive encyclopedia. The Brhaddharma Purana eulogises it as a holy treatise equal in status to the Vedas, saying that one who possesses the Mahabharata is sure to be victorious over the entire world. It further goes on to say that as there is no end to the virtues of Narayana, to the waters in the seas and to the number of caves in the mountains so there is no end to the merit earned by a study of the Mahabharata. The Mahabharata is a compendium dealing with subjects like Economics, Politics, History, Philosophy and Theology. The same Purana says that just as it is not possible to live without food so there is not the least possibility for any story to come into existence without the aid of the Mahabharata. According to the Visnudharmottara Purana, the Mahabharata is so efficacious that its study can prevent a person from going to hell, unless, of course, he is not a sinner to the core.

At several places in the Mahabharata itself, the work has been described as a monumental work of history, theology and quite a large number of other subjects; but our interest lies only in such statements contained in the Mahabharata as relate to its poetic value. In the words of Sauti, Krsnadvaipayana himself claimed this work to be a kavya of the highest order. Sauti adds that, according to Brahma, Vyasa never told a lie and so what he has said cannot be without foundation; the work of Vyasa is bound to attain the status of a kavya and a writing of even the greatest among poets will never excel the poetic merits of the Mahabharata. The niceties of the Mahabharata from the literary point of view have been enumerated in the following verse:

i.e., 'this poem is adorned with auspicious words and (poetic) conventions relating to gods as well as men, is studded with various kinds of metres and is (consequently) loved by the scholars.'

In the following chapters it has been tried to prove with the help of appropriate illustrations from the Mahabharata the truthfulness of the above-mentioned statement of Sauti. As a matter of fact, it is this very verse which has inspired the present author to view the Mahabharata from a literary angle of vision.

The book was originally submitted as thesis for Ph.D. degree in Sanskrit of the University of Lucknow under the same title as it bears now, viz., The Mahabharata A Literary Study. It has been thoroughly revised before being published in the present form. As mentioned before, in this work my aim has been to critically examine the Mahabharata from a purely literary point of view. To the best of my efforts, I have tried to avoid entering into the various controversies regarding the authenticity of the text, the extent of the number of verses and the question of interpolations. I have also not entered into the questions relating to the reality or otherwise of the epic characters, like those of Kauravas and Pandavas, Likewise, the philosophy, too, of the Mahabharata could not engage my attention.

The present study of the Mahabharata is based mainly upon the text published with Nilakantha's commentary by the Chitrashala Press, Poona; but wherever necessary I have also consulted the texts published by the Bhandarkar Orientals research Institute, Poona, the Gujrati Printing Press, Bombay (only the Virata and Udyoga Parvan-s) and the Gita Press Gorakhpur (with Hindi Translation) as well as the Calcutta Edition of the same. I have also drawn upon the two available English translation, viz., those of P.C. Roy and M.N. Dutta. 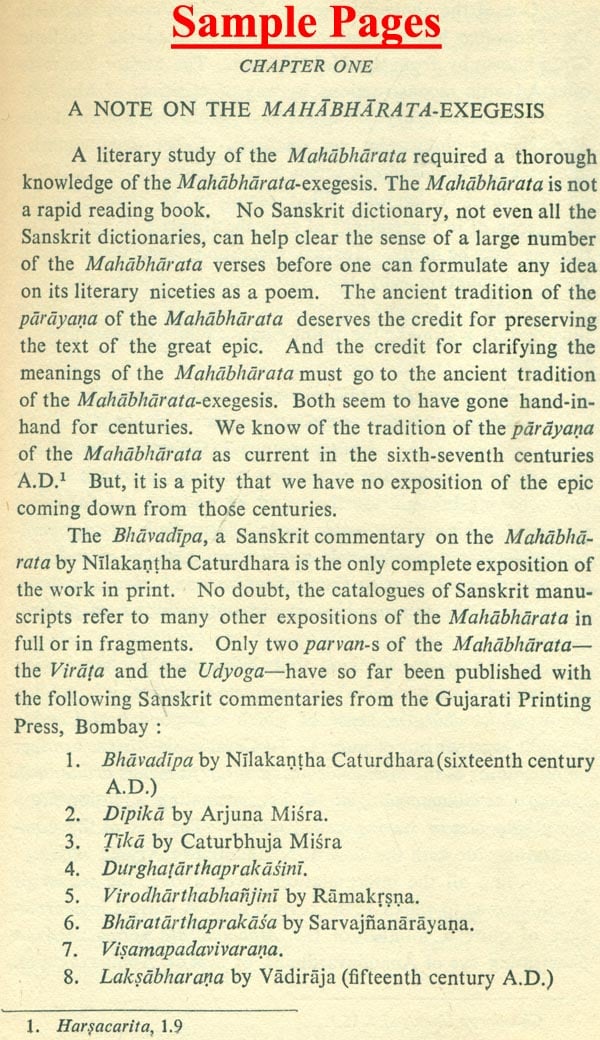 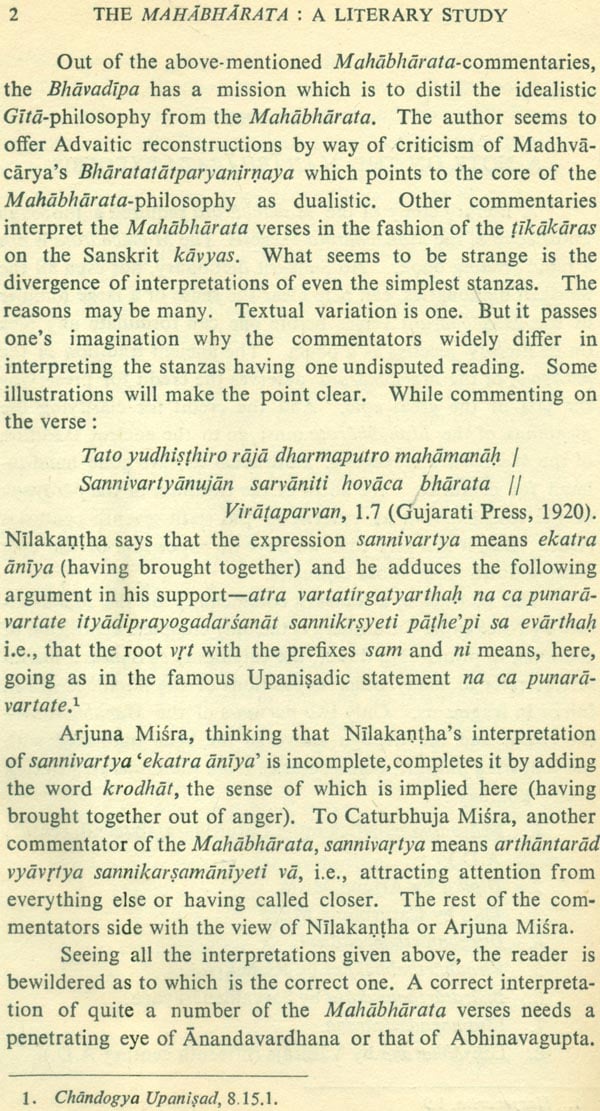 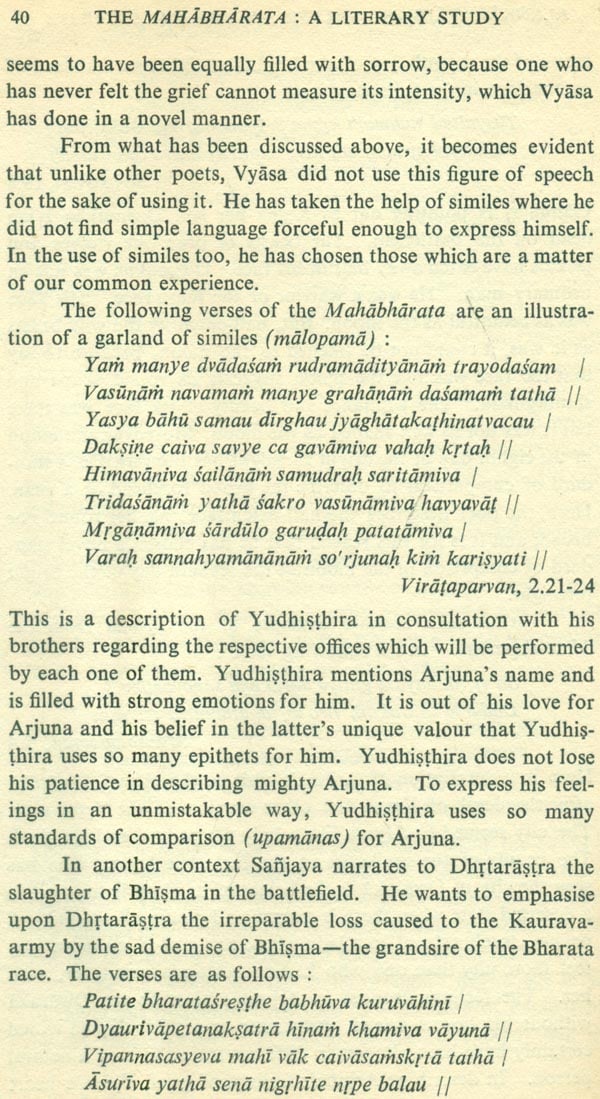 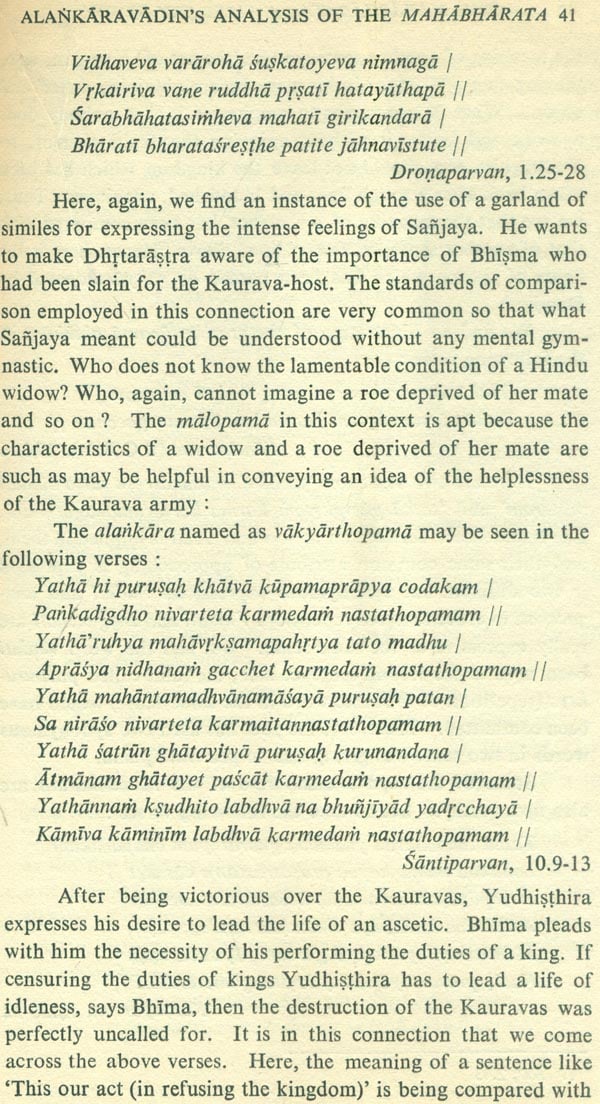 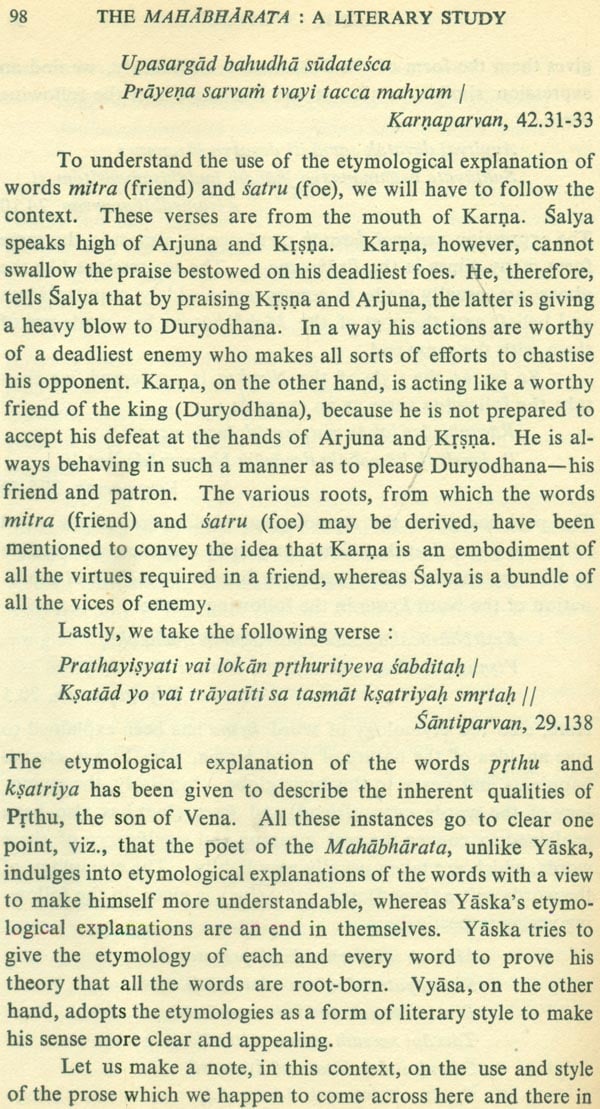 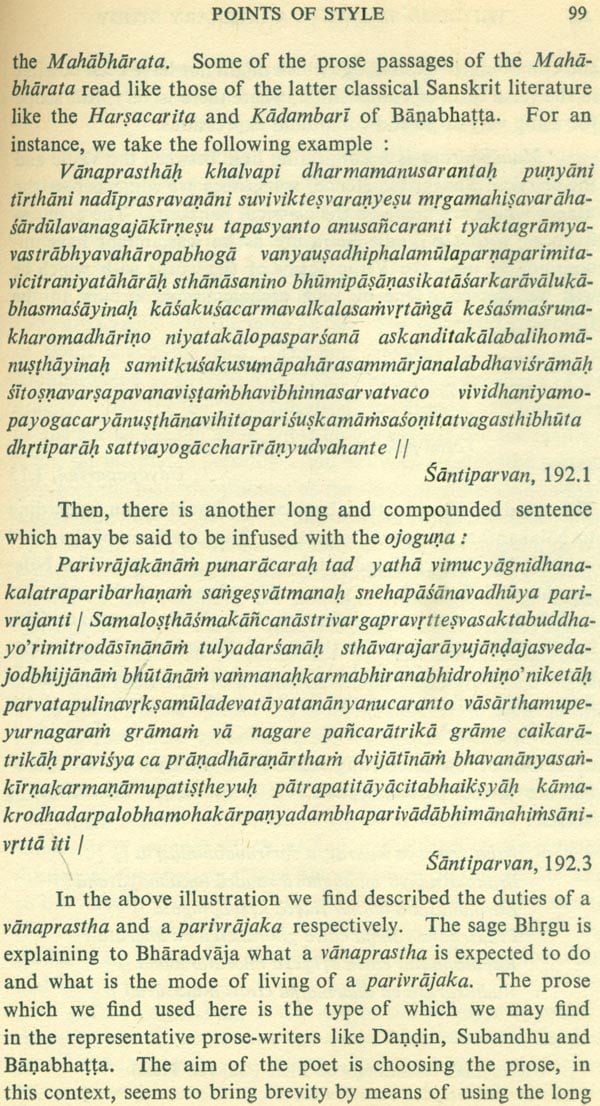 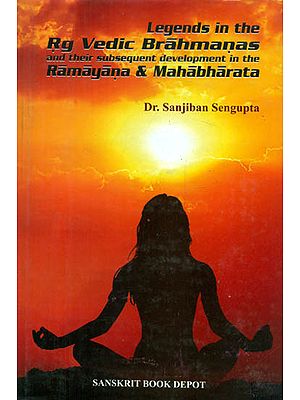 Legends in the Rig Vedic Brahmanas and Their Subsequent Development in the Ramayana & Mahabharata
By Sanjiban Sengupta
$30.75
FREE Delivery
$41  (25% off) 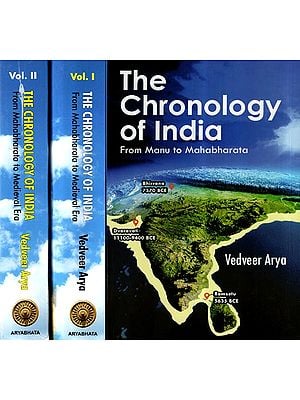 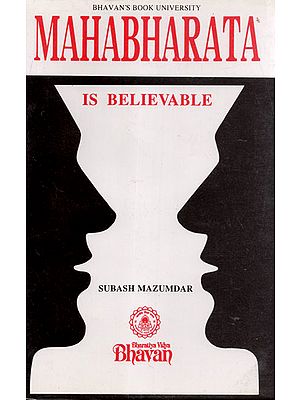 Science and Technology in Ancient India as Reflected in the Mahabharata
By A.R Vasudeva Murthy
$14.25
$19  (25% off)