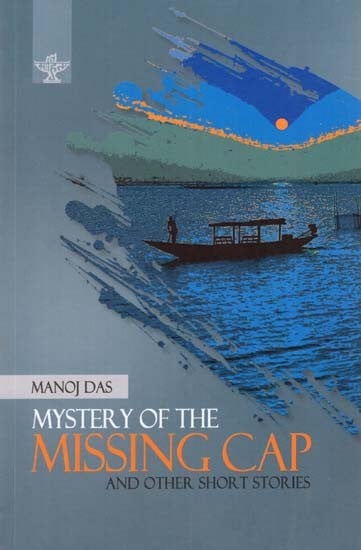 The Mystery of the Missing Cap and Other Short Stories, originally published as Manoj Dasanka Katha 0 Kahini was the first collection of short stories in Odia to receive the Sahitya Akademi Award (1972). The collection spans twenty-two years of the writer's contribution to Odia short story, from 1950 to 1972. While Sri Das has won wider recognitions through his subsequently written stories, roping into the circle of his admires writers like Graham Greene and H.R.F Keating, this collection marks a milestone in the evolution of Odia fiction, infusing into the genre of short stories a new vitality through a combination of deep psychological insight into characters and situations and a remarkable precision in style. The translation is by the author himself who also occupies a special place in Indian writing in English.

One of the foremost creative writers of modern India who writes with equal felicity in Odia as well as in English, Manoj Das is a recepient of a number of awards including the Sahitya Akademi Award, Saraswati Samman, Padma Bhushan Award as well as Honorary D.Litt. from several universities. He has also been bestowed with the country's heighest honour for creative writing, the Fellowship of the Sahitya Akademi. He lives in Sri Aurobindo Ashram, Puducherry, and teaches at Sri Aurobindo International Centre of Education.

The collection of short stories bearing the title Mystery of the Missing Cap and other Short Stories in English was the first to receive the Sahitya Akademi Award so far as the genre of short stories was concerned in Odia, my mother-tongue, for the year 1972. All the stories included in the earlier editions of this title were written before 1970. In this edition I have included a few from my subsequently written stories in place of a few earlier ones. I crave the indulgence and approval of the authorities of the Akademi, my publishers.

Born in 1934, I was at an impressionable age when India experienced momentous transitions. The nation achieved freedom; feudalism and princely rule ended; technology metamorphosed several aspects of its life—particularly the life of rural India. Many found it difficult to cope with the demands of the new politics and lure of the new life-style. Some stories in this collection reflect the dilemmas, the hopes and despair resulting from such changes—for example a piece like "Mystery of the Missing Cap". Many readers of the present generation are not likely to know the role of the Zamindars or the feudal lords in the vast rural India—that went strong till the middle of the 20th century. In some of the stories (like "The Candle" or "The Owl") they can feel a touch of the atmosphere of that lost world—and about the characters—the products of that system.

And readers today may feel amused about the fact that the villagers knew the time of the day or night—through the collective howl of jackals—for along with the chunks of woods that existed amidst the cluster of villages the jackals too have almost disappeared. Readers have also to exercise their imagination to feel the effect of the sound of conch-shells emanating practically from every household in the village soon after the sunset. The institution of the village midwife (as depicted in "The Strategy") or that of the Chowkidar—the lowest village official linked to the Police system during the British Raj) may not also be known to most.

Also, the little tourist circuses ("Of Man and Monkey") had become a memory.

Even a word like feringhee (in "farewell to a Ghost") used by the rural folks to mean the white men (originally referring to the Portuguese) is no more in vogue.

However, I trust, such changes will not hinder the appeal of the stories.

Being a bilingual writer, I wrote some of these stories first in Odia and then in English and vice versa. But I did not literally translate from one language into the other. Needless to say, being the original author I exercised a liberty that cannot be available to a translator however accomplished.

Now, I strongly feel like bringing a certain situation to the notice of the readers. Kindly bear with me:

There were two Indian journals carrying creative writings which commanded some circulation in the West: The Illustrated Weekly of India and the Imprint. (The latter used to be published from Hong Kong and edited by a distinguished English author Phillip Knightly before shifting to Mumbai.) I wrote frequently for both the magazines. In 1971 John Montagu, the future Lord Sandwich, brought "Mystery of the Missing Cap" to the notice of Alan Maclean, the editor of the annual anthology of short stories, The Winter's Tales (Macmillan London and St. Martin's Press, New York). The renowned editor expressed his happiness in many words and published the story in The Winter's Tales 18 (1972) and it was reproduced in a number of other publications.

It seems a keen interest had developed in the West in the seventies and eighties of the last century for the current Indian fiction, not in any popular sense, but among the scholars and in the academic circles. There were loving demands for my stories from the University journals for their special issues. Even the very inaugural issue of a magazine the Ascent, launched by the Department of English, the University of Illinois (1975) carried my story "A Night in the Life of a Mayor" and before long in its third number, "Statue-Breakers are Coming!" The Long Island University brought out a special number of their publication Confrontation edited by Martin Tucker as an independent volume entitled Brooklyn and the World (1983) carrying in two sections what the editors considered as significant writings of Brooklyn juxtaposed with the significant writings of the contemporary world. It was my "Laxmi's Adventure", a story with a typical Indian village for its backdrop, featured in it as the sole item from this subcontinent. That excellent monthly from Australia, the Hemisphere, reproduced it. In fact, its editor, Kenneth Russell Henderson reproduced a number of my stories during a decade. Interestingly, its annual anthology (1982-83) of four hundred pages carried only one short story and that was "The Submerged Valley". The editor informed me that that was the only story they had published during a full year.

So were chosen my other short stories by magazines such as The Makthat Review ("Farewell to a Ghost" 1973), an International Quarterly published by the University of Victoria, Canada, and the International number of the New Orleans Review ("The bridge in the Moonlit Night" 1979). So many other academic publications, such the Carleton Miscellany, Denver Quarterly reproduced my stories and once in a while a popular journal like Newsart ("The Kite") of the New York Smith publications too did so. The annual list of notable stories prepared by Martha Foley (founder of the once well-known magazine, the Story) for the year 1975 included all five of my stories published that year in the U.S.A.

A bunch of my stories was taught at some universities, I believe at the personal initiative of professors (this process continues, though I do not know to what extent) and I got highly interesting response from students and professors from time to time. I still receive—occasionally. The latest to have come (2020) is from a group of students of Salisbury University, U.S.A.,—their interesting observations on “The submerged Valley” taught by Professor Manav Ratti. Prof. Ratti had also been sponsored by the university to have an elaborate interview with me, published in The Journal of Commonwealth Literature, 2018.

But, the dire fact to which I propose to draw the attention of my readers is, alas, the situation seems to have rapidly changed. How?

The explanation I have received is, the sudden sensation made by some novels by Indian authors, highly publicised awards and all that, set a very different trend and changed the Western attitude to contemporary Indian literature; for good or bad is a different issue. But I must say that I do not know how true is this observation. But that apart, I am afraid, meanwhile the taste of the readership too had changed. Some of the highly discerning publications like the Ascent and popular yet culturally decent Hemisphere—even that coveted medium for good short stories 7he Winters Tales have folded up; just as in India we have no more The Illustrated Weekly or the Imprint or The Heritage. Our national English newspapers which devoted their Sunday issues to promote creative writing— mostly short stories, do not do so any longer.

Only hope, I wish I could say a certainty, is creative writing born of true inspiration will survive the vicissitudes of time.

L am grateful to the Sahitya Akademi, our national academy of letters—to the dear Secretary Dr. K. Sreenivasarao in particular—for taking interest in this collection. I thank Shri Pankaj Seth of the Akademi who calmly accommodated my repeated interventions at the preparation of this edition of the work.

I thank all the publications in India and abroad who carried these stories. Affectionately I acknowledge my debt to Shriman Anup Kishore Das, the one person who did everything logistics required for preparing this compilation in a very short time. 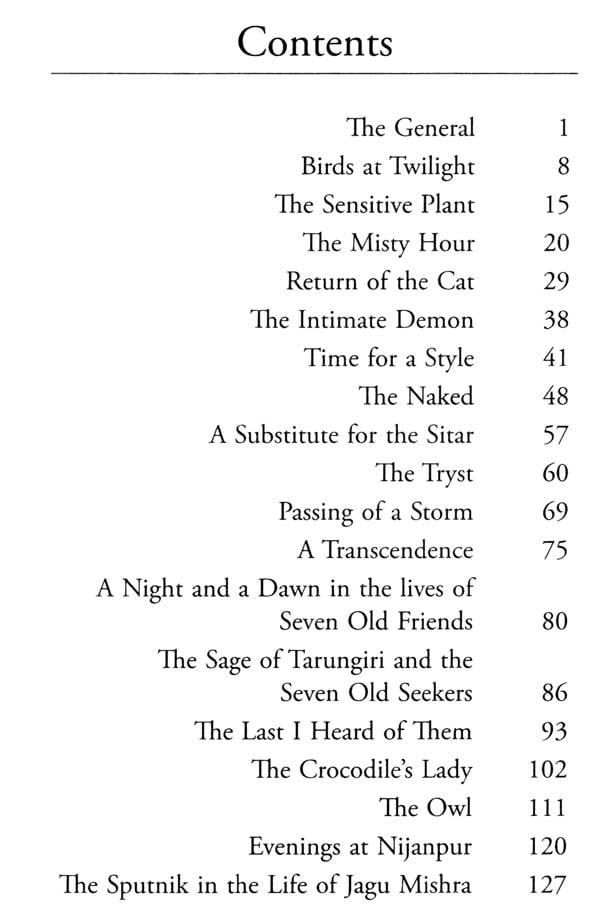 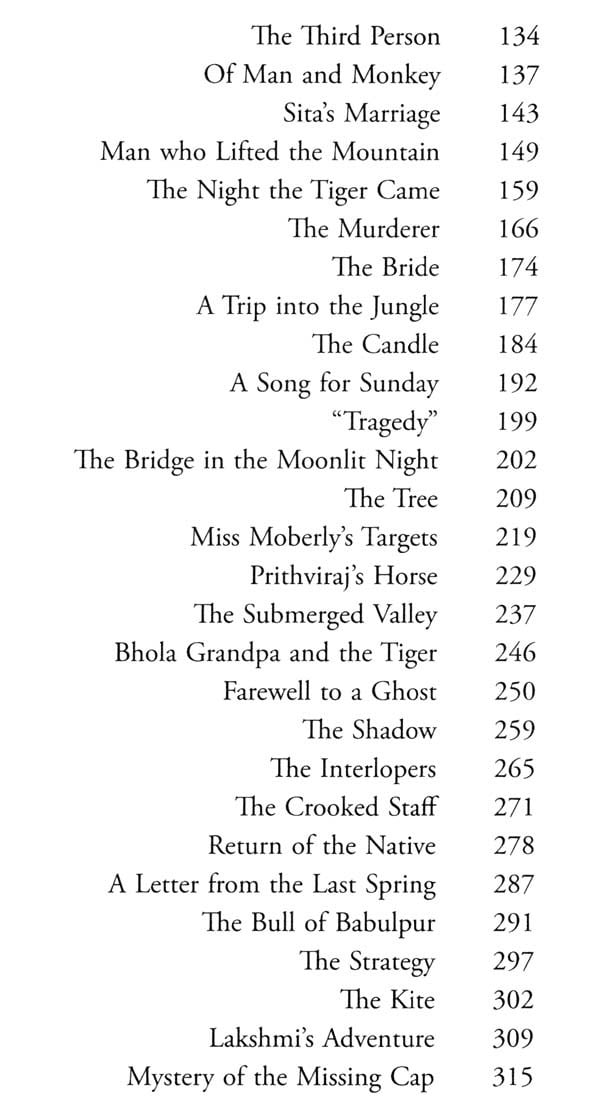 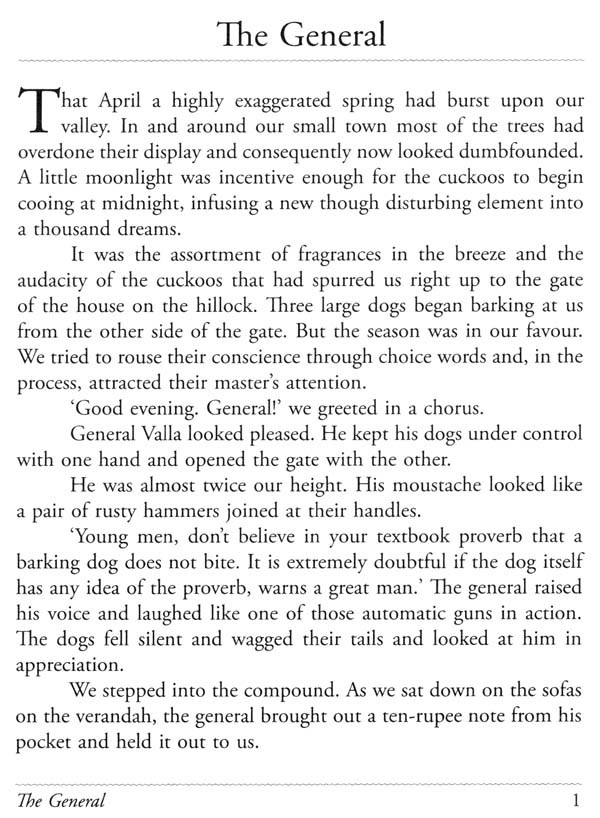 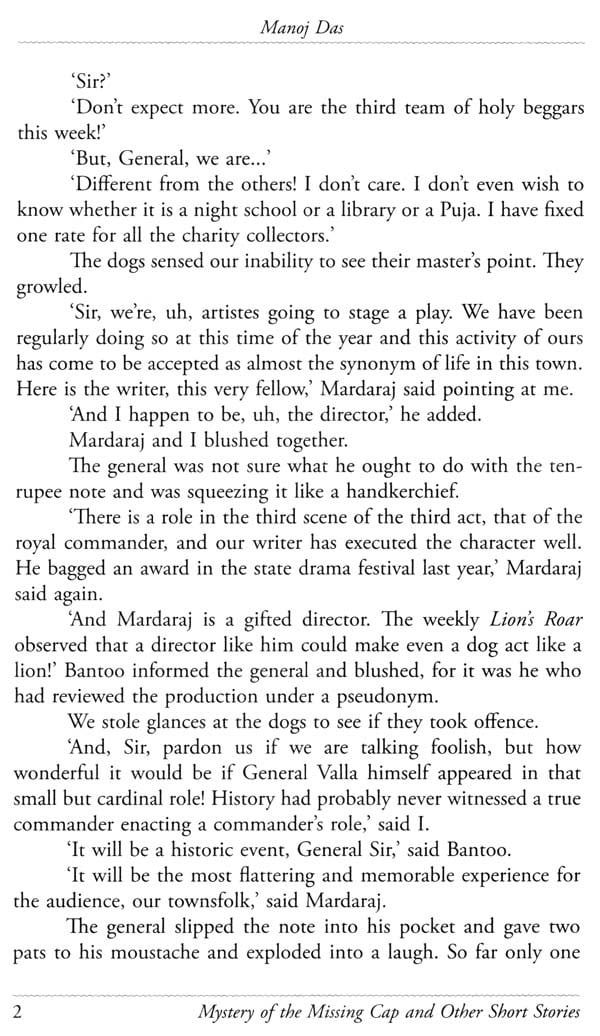 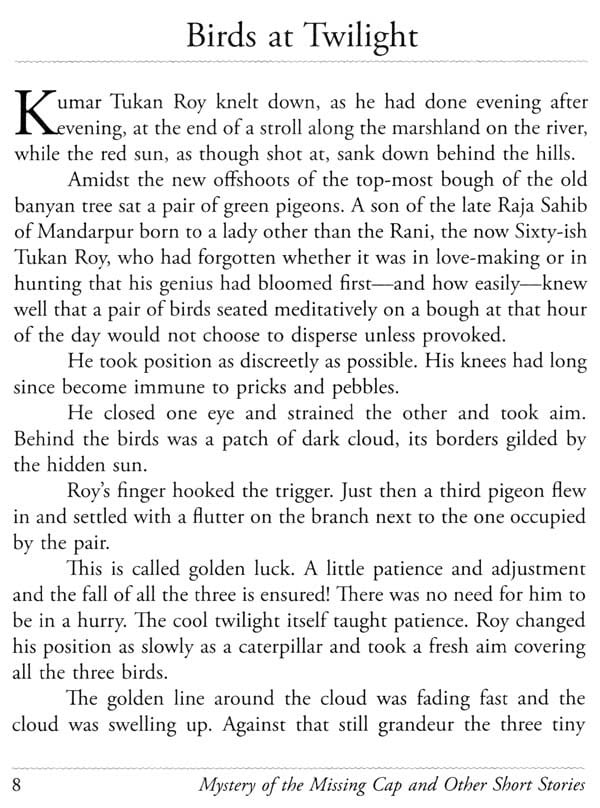 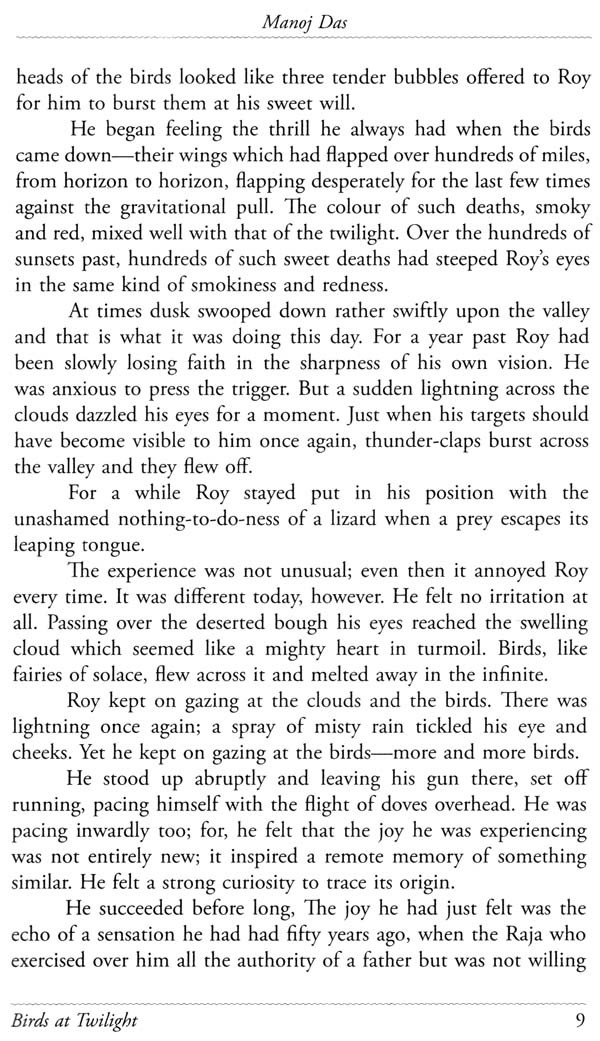 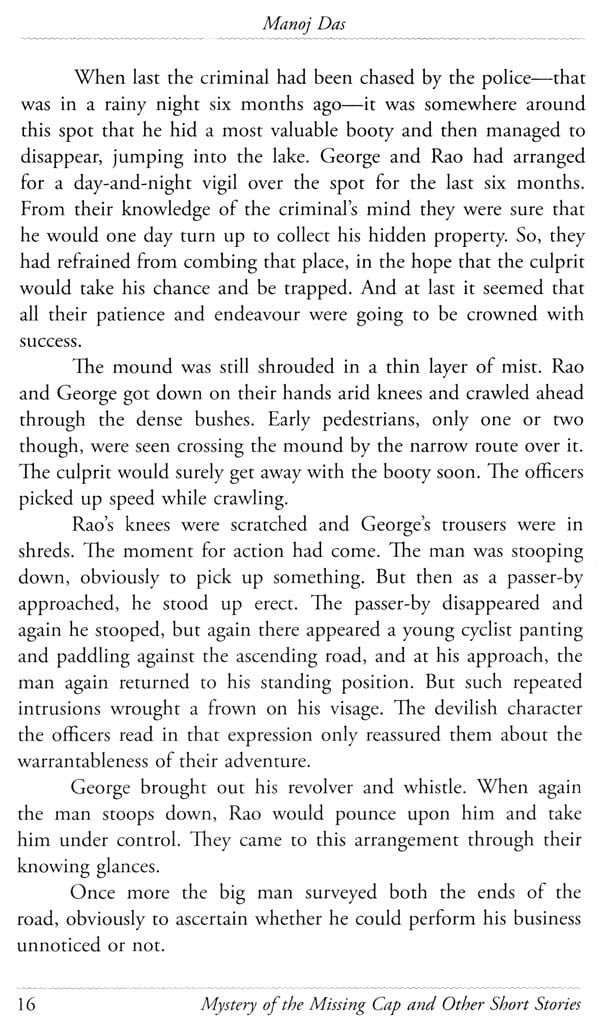 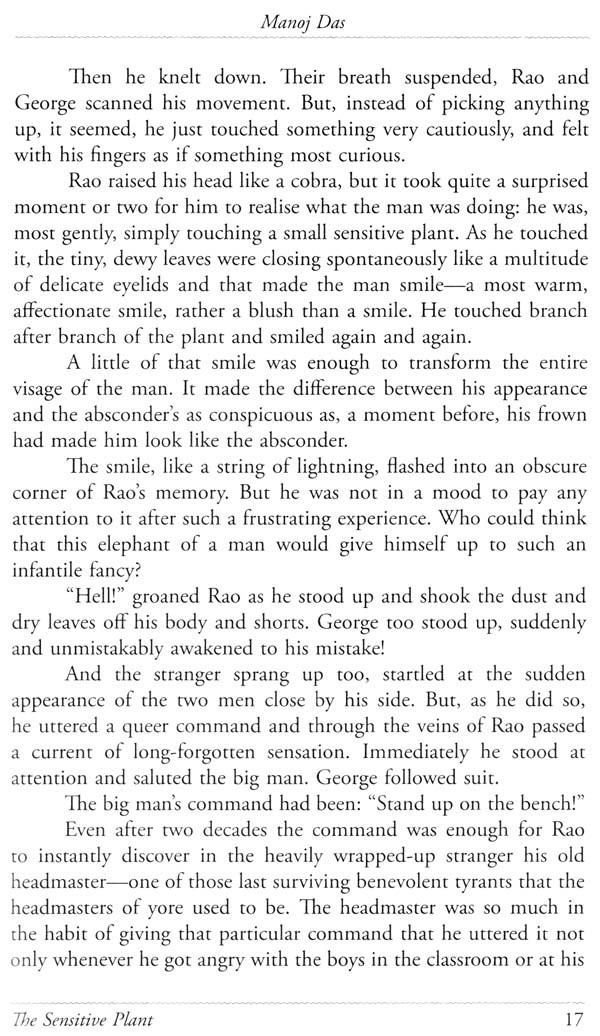 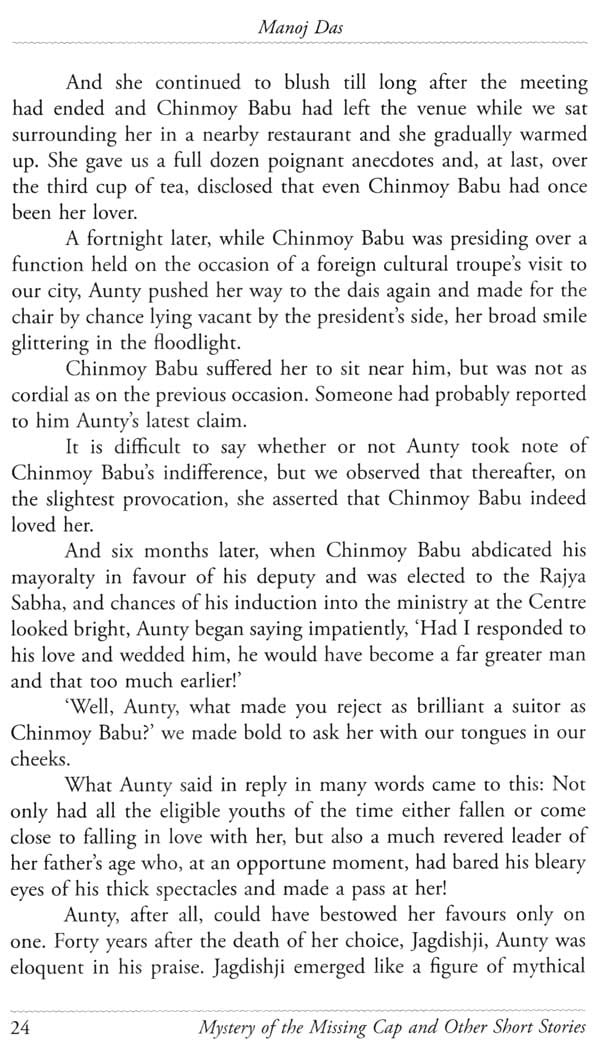 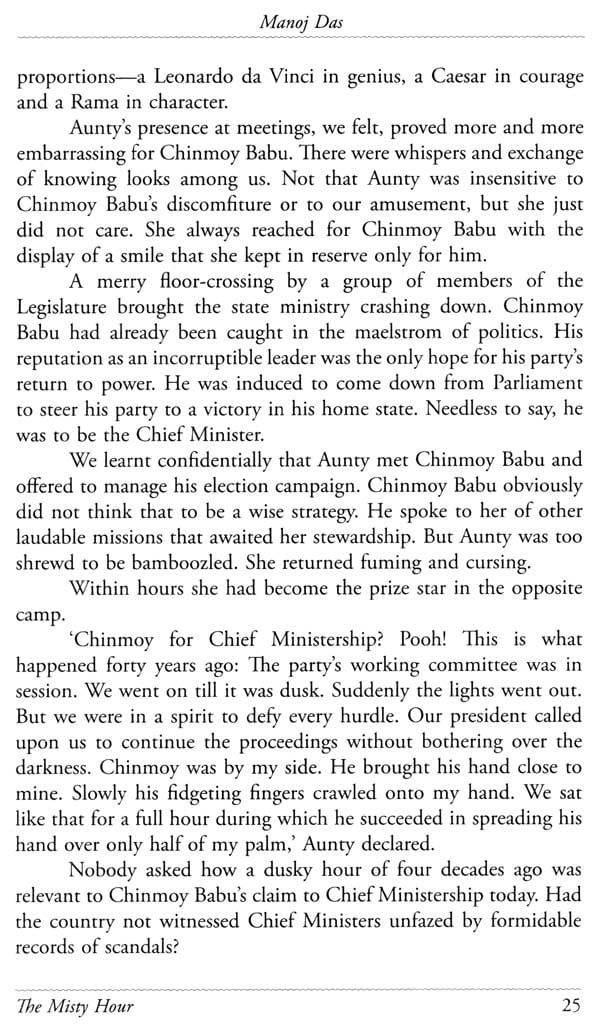