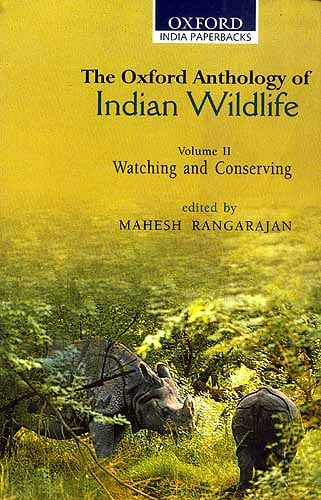 The last century has witnessed a remarkable change in attitudes to wildlife, with the focus shifting from conquest or slaughter towards conservation. This volume, the second in a two-volume set which brings together wildlife writing from the days of the Raj to the present times, celebrates the transformation.

The narratives of tiger shikar bring the naturalist to the fore as they describe the big cat in a variety of habitats across South Asia and celebrate its majesty. There are vivid descriptions by pioneering animal watchers such as Corbett's account of a stag in the mountains, encounters with the lions of Gir Forest on foot, the life-and-death encounter of prey and predator in the jungles of Assam, and Salim Ali's description of the 'city of flamingoes'. The transition from gun to camera emerges clearly through the experiences of two great conservationists-Kailash Sankhala and Arjan Singh.

The new class of naturalists gives equal attention to smaller animals and trees, as evident in the pieces on the blackbuck, the wild dog, the turtle, the cobra, and the comings and goings at a waterhole in summer. The volume also documents new trends in the study of animal behaviour and life, in the accounts of Valmik Thapar and R. Sukumar which detail the family life of tigers and elephants.

The dilemmas of conservation come alive in this book, and alert us to the need for efforts to keep nature a haven for wildlife as well as a home for man.

Mahesh Rangaraja is Fellow, Nehru Memorial Museum and Library, An environmentalist and political analyst on television and in print, he is the author of Fencing the Forest (OUP, 1996).

The eclipse of the Empire in India came in 1947, but many of its old habits lingered. Queen Elizabeth II and the Duke of Edinburgh, later President of the World Wildlife Fund International, visited India in 1961; what led to a row was their tiger shoot in the old hunting reserve of the ruler of Jaipur in the Ranthambore forests. The shoot commenced, and the tiger was duly despatched, trans-formed into a trophy to live on in the hunters' tales of how they had shot dead a master predator. The British tea planter and naturalist E. P. Gee, who had stayed on in India, actually defended the choice of target. He even compared the slaying of a tiger in India to the shooting of a stag in Scotland. Given a sense of restraint, he said, such acts would not harm wild populations; the sport-hunter was a friend of the forest. Keep aside a few choice specimens for his pickings and he would help save the woodland from axe and plough, the deer from the poacher, the tiger from the snare-setter. The logic was not new, but the intensity of the debate pointed to great changes down the road.

The India of the 1960s was not so different from the times of the Raj. It was still mandatory for a Divisional Forest Officer to shoot a tiger before getting charge of his tract of forest. American tourists came out to emulate Corbett's feat of bagging an extra-large male tiger, the famous Bachelor of Powalgarh. Contrast the tech-nologies available to those of a century ago, and the hunter seemed to be inexorably closing in on the hunted. The four-wheel drive, the dry cell battery light, anti-malarial drugs, telephone lines to once remote bungalows, long-ranging rifles: all made it easier to travel faster, shoot more effectively and kill more game than ever before. The decline and retreat of the denizens of the forest accelerated. It provoked not only a revulsion to slaughter but a new sense of love for wildlife.

However, beneath the trigger-happy surface, rumblings of change had been perceptible decades earlier. After the First World War, shocked by the carnage in the trenches of Europe, many British officers turned away from their guns during their subsequent posrings to India. There were other early signs of empathy for the wild. One of the finest pieces of Jim Corbett-reproduced in this anthology-is about watching a herd of hangul or Kashmir Stags, spellbound by their beauty. Corbett's gun lay forgotten and he came away empty-handed, but the memory of that encounter lived on. Fred Champion actually gave up hunting and pioneered the photography of large Indian mammals in the wild.

A generation earlier, bag limits had been imposed on how many deer could be shot in state forests, though more as an act of prudent sportsmanship than protection. Others now turned their focus from the mega-fauna of the forest to its smaller, equally colourful inhabitants. Bird-watching had the added charm of being possible even within the confines of big cities or on the outskirts of small towns. A woodland like the Gir, renowned for its lions, could offer more thrills and yield many a secret to one whose trained ear could tell one bird song from another. Early in the twentieth century, came the discovery of the city of flamingos on the salt encrusted flats of the Rann of Kutch. Salim Ali made the arduous journey to and fro on camel-back, pointing out that watching birds in such hostile and forbidding terrain was as trying as stalking big game on foot.

As the joy of discovery and the shooting of wildlife with the camera gained new adherents, there rose a growing band of critics of the old order. Not all made headway. The English missionary and writer Edward Thompson, who wrote a fine essay on the decline of India's fauna in the 1940s, raised the issue with Mahatma Gandhi. The latter assured him tongue in cheek that even though wildlife was dwindling in the jungles it was increasing in the cities. Others were more receptive. Lodged in the Naini Tal jail, Jawaharlal Nehru busied himself with Salim Ali's bird book, exchanging notes on identification with fellow inmates and his daughter, Indira. Though he had shot a goral (a goat-antelope) on his honeymoon, the sight of its death had moved him deeply. Similar tales of the penitent butcher turning away from the artefacts of killing were to be played out time and again. The reformed big game hunter, usually one of the local landed gentry, had often begun by shooting as a school boy. It was men like these-Billy Arjan Singh's name comes to mind-who would cross over to conservation in independent India. They are prominent as pioneers in the art of watching animals. A fawn at play, the role of leopards in nature's economy, the behaviour of tigers in the wild: each became first a note in a diary, then the subject of an essay. The pioneers were blazing a new trail. Their writings are a bridge between the shikari past and our own Age of Ecology.

For the big game hunter, India was a kaleidoscope of landscapes, each symbolized by a trophy-worthy animal. Assam meant rhinos, Mysore the gaur and so on. The next step was a logical one. The canvas broadened to include trees and wild flowers, common birds and reptiles. As new ways of seeing and asserting the coherence of the world gained ground, the lapwing seemed as engaging as the leopard, the cobra as mysterious as the tiger. Few men have ever played as central a role in changing popular perceptions of nature in this regard as M. Krishnan. If as many as five extracts from his writings figure in this collection, it is a measure of his immense contribution to the broadening of our vision of the wild. He began writing in the 1930s, and was a pioneering publicist of the havoc suffered by India's wildlife as well as part of the new efflorescence of natural history writing, field biology and conservation.

The living landscape would find new men and women to celebrate and record its splendour. Many are names familiar to the average newspaper reader, others are less widely known than they deserve. These new writers form a mixed crew. Kailash Sankhala, writing from the 1950s, was a forester turned conservationist. A generation down the line, A.J. T. Johnsingh set out to do a doctorate on the dhole or Indian wild dog-and demolished a century-old stereorype of an insensate deer-hunting beast. Rom Whitaker, snakeman extraordinary, opened our eyes to the vital role reptiles play in India's economy, ecology and culture. The scientist Raman Sukumar unlocked secrets of the family life of one of India's most beloved creatures, the elephant. The list is long and growing.

Not that the challenges of conserving wildlife have diminished or the threats receded. Park-like enclaves for patches of natural forest or scrub do exist, but these are hemmed in by the growing demands of industry and the modern market. Co-existing with nearly a billion people is not easy for lions, elephants and their neighbours. Yet India's scientific expertise and the sheer persever-ances of its conservationists, the deep-seated roles of the wild in its culture, and the growing debate on how best to protect what remains-all of these offer hope for the future. The pressures are mounting, not only in forest or mountain, but also in mangrove and on the coast line. But there is little doubt that a better quality of life for India's people is dependent on these natural treasures. From being an aesthetic luxury or a mere resource reservoir, they are now accepted as the surest sign that the natural cycles of repair and renewal are still intact.

Sometimes particular places symbolize best how far things have truly changed. Ranthambore was a killing field for tigers till as recently as 1961. Perhaps it can also be an emblem, a symbol of the great changes that have since occurred. For decades, tigers were portrayed by hunter-naturalists as creatures with virtually no family bonds. They were killers of the night, untameable and ferocious, fit only to be shot or at least avoided at all costs. It was in this spirit that Col. Kesri Singh organized shoots for the princes with his customary expertise. In 1973, a little over a decade after the Duke's fateful shoot at Ranthambore, the forest became one of India's tiger reserves. What followed was not only a recovery of the fauna and flora, but the amazing and unprecedented phenomenon of wild tigers dropping their nocturnal cloaks. Valmik Thapar's account of the close bonds of a male tiger with his mate and cubs is both remarkable and deeply symbolic. The first because it changed our earlier notions of tiger behaviour: the callous male could even be a doting father. And symbolic, for it showed that even big cats can get over their wariness of people and forge new bonds of trust with people. To keep these ties alive is one of the great challenges of the times we live in.