The Tamils may be justly proud of the fact that Tamil has won the status of a Classical language, the status it richly deserves and should have got long, long ago. The Central Institute of Classical Tamil (CICT), established in Chennai, has mapped out various plans including preparation of definitive editions of forty-one Classical Tamil texts and translation of these works into English and other major European languages as well as into major Indian languages and writing of a historical grammar of Tamil. Language being the autobiography of a people, our objective is to preserve and safeguard the invaluable treasure of the literary compositions in our language. If only we could delve into our past and recover the riches and wealth of the mighty treasure trove of Classical Tamil poetry, we will be amply rewarded by its lofty poetry, the poetry that strengthens and purifies the holiness of heart's affection and enlarges our imagination. Apart from these, reading the ancient Tamil texts such as Tolkappiyam, Ettuuokai, Pattuppattu, Tirukkural etc., provides a foundation for scholarship for the present and in this sense they do provide enlightened education.

Palamoli Nanuru is a treasure house of four hundred quatrains in Tamil that reveal the wisdom of the Ancient Tamils via their proverbs. It belongs to the group of ethical works like Tirukkural, Nanmanikkatikai, Ndiatiyar and so on that are broadly called Niti nulkal belonging to the Patinen Kilkkanakku corpus. It is gratifying to note that even in those ancient times the poet, Munrurai Araiyanar had thought it fit to collect proverbs that were already in vogue rather than create some of his own or write an ethical treatise in verse. Most of these ethical works, if not all, have been attributed to Jain ascetics because some of the principles of Jainism lie scattered here and there in these works. However, there is no evidence of these literary works being propagandist. Written in simple style they can be easily comprehended by the common man. Palamoli Nanuru, in recording the proverbs has become a document of history also. Thus, Munrurai Araiyanar is a poet, a historian and an ascetic all rolled into one - a unique personality indeed.

The Institute is proud to bring out a volume containing the Tamil text, its transliteration and three English translations, two in verse and one in prose. The translations in verse are by S. Raman and M.D. Jayabalan, while the prose translation is by Nalladi R. Balakrishna Mudaliar. All three of them are erudite and competent scholars and have done justice to the work they have undertaken. I appreciate the work done by the editor-cum-translator, M.D. Jayabalan.

I appreciate the Department of Translation and the Publications Division for the stupendous effort they have undertaken in bringing out this volume on schedule. I am certain that this volume will be a great spur to the present and future generations to study the Cankam classics and improve on the translations that already exist.

I place on record my deep appreciation and sincere thanks to the Hon'ble Minister of State of Human Resources Development, Government of India, Dr. D. Purandeswari, Vice-Chairperson of the Central Institute of Classical Tamil, Chennai.

Palamoli Nanuru is an anthology of four hundred quatrains in Tamil, written in the poetic form called venpa. It is grouped along with seventeen other such anthologies thus making a total of eighteen volumes generally classified as Patinenkilkkanakku. These poems are generally didactic in nature, meant to impart lessons in morals for a better civic living.

All these works may be attributed to a period later than the Carikam Age. May be they were written before or after the fifth century AD. The aim of Palamoli Nanuru is to keep alive the memory of useful proverbs prevalent in Tamil Nadu in those days. Proverbs were pithy sayings, pregnant with worldly wisdom. They were so crisp and short that they always ran the risk of losing their meaning over the passage of time. Therefore, the poet, Munrurai Araiyanar thought it expedient to explain the meaning of the axiomatic proverbs, incorporating them in the last two lines.

Munrurai Araiyanar is regarded as a Jain poet and philosopher, for there is reason to believe he could have been one. There are references to the faiths and practices of the Jains in the poems. The term 'araiya-' is a variation of 'araca- "meaning 'king or ruler'. May be it also referred to the name of a community, to which he belonged, or was a surname. In the proem the poet is referred to as munruru mannan. Therefore it is treated as proof to regard him as the ruler of a place called Munrurai.

Though there is no reference to the life of the author, it is apparent that the poet never allowed his religious faith, whatever it was, to interfere with the technique of using poetic conventions and making literary or topical allusions. There are a few references to Hindu mythology and gods. This is a characteristic of most of the Tamil poets. Literature transcended religous bigotries and faiths. Poetic conventions were commonly accepted and practised. It is a proof to the contention that early Tamil literature was secular, and that devotional poetry appeared at least a thousand years later.

The general mode of presentation of the proverbs is to insert the proverb in the last and fourth line, or allow it to spread over the third and the fourth lines. Normally the first two lines are used to present the moral precept, and in most of the verses the third line is an address to a King or to a Lady.

It is to be mentioned here that some of the proverbs are still in vogue; some in a slightly modified form; and some have lost currency. However, it is interesting to note the expository method Munrurai Araiyanar uses to relate the proverbs to practical life situations.

T. Chelvakesavaroya Mudaliyar recalls in the Prefatory Note to his English translation of Palamoli the words of Mr Charles E. Gover, member of the Royal Asiatic Society, in his Introduction to the Folk Songs of Southern India printed in 1871: "There is a great mass of noble writing ready to hand in Tamil and Telugu folk-literature, especially in the former. To raise these books in pubic estimation, to exhibit the true products of the Dravidian mind, would be a task worthy of the ripest scholar and the most enlightened government. I would especially draw attention to the Eighteen Books that are said to have received the sanction of the Madura College,."

The Prefatory Note is dated 1916, Perambalur. It thanks V.O. Chidambaram Pillai for helping at the time of printing. The present editor could get only a copy of the English translation which is published with the title "Contents". Mr T. Chelvakesavaroya Mudaliar actually published the Tamil texts with commentary, based on the MS copy he had owned.

The sequence and thematic classification of the Tamil verses used here follows the later editors' attempts. The manuscripts available in palm leaves had no such chapter division, and each verse was a unit by itself. The author did not seem to have planned a collection under different titles. Commentators thought it convenient to group them under common headings for easy understanding.

T. Chelvakesavaroya Mudaliyar records that the first printed edition of Palamoli was published by Mr, Subbaraya Chettiar, Tamil Pundit of the old Normal School (later Teachers' College) in 1874. He had classified the contents into thirty-nine chapters of ten stanzas each. Mr Arumukam Nainar, National High School, Thiruchi, printed the text, in the order in which it was found. In the reprint (1981) of Murray S. Rajam's edition of Sangam Literature (1957) the Board of Editors states that Subbaraya Chettiar's edition of Palamoli (1874) was the first to classify and group them according to themes. However, the said reprint by New Century House retains the palm leaf MSS arrangement. Mr Narayana Iyengar also followed the original order of verses.

The present edition following other editors and commentators like Mr M.P. Ramanathan Chettiar of Thiagaraja College, Madras (1961) and Mr. A. Manikkanar of A.M. College, Chennai (1999) presents the Tamil text.

The English verse and prose translations are collected and arranged in the following order: M.D. Jayabalan, S. Raman and Nalladai R. Balakrishna Mudaliyar. Some stray translations by F.W. Ellis were available and they are given as the fourth translation.

It must be recorded here that the translation by Prof S. Raman tries to be very close to the Tamil text and becomes too literal, and sometimes unpalatable to the English tongue.

The other verse translation attempts to present the content and often omits the third line, which is generally in the form of an address to a Chieftain, or a King or a Lady, whenever the translation exceeds four lines. This form of address is a literary convention and often used as a space-filler; moreover such an address is not functional and does not directly or indirectly add to a better appreciation of the content of the poem. However, it has been accommodated wherever possible.

A sort of formal equivalence is also aimed at in the translation of M.D. Jayabalan, trying to introduce in English, initial rhymes, a common feature in Tamil poetry, but totally alien to English verse. 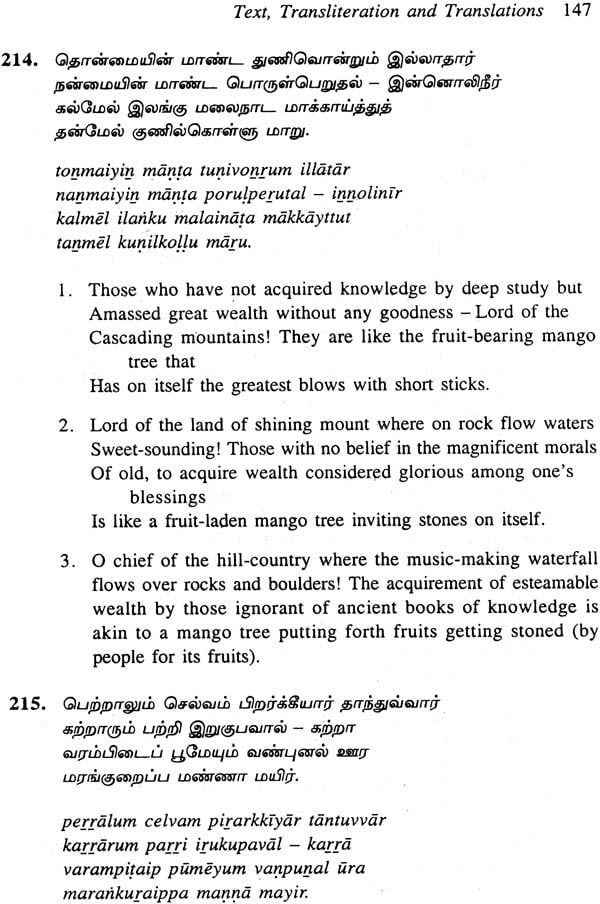 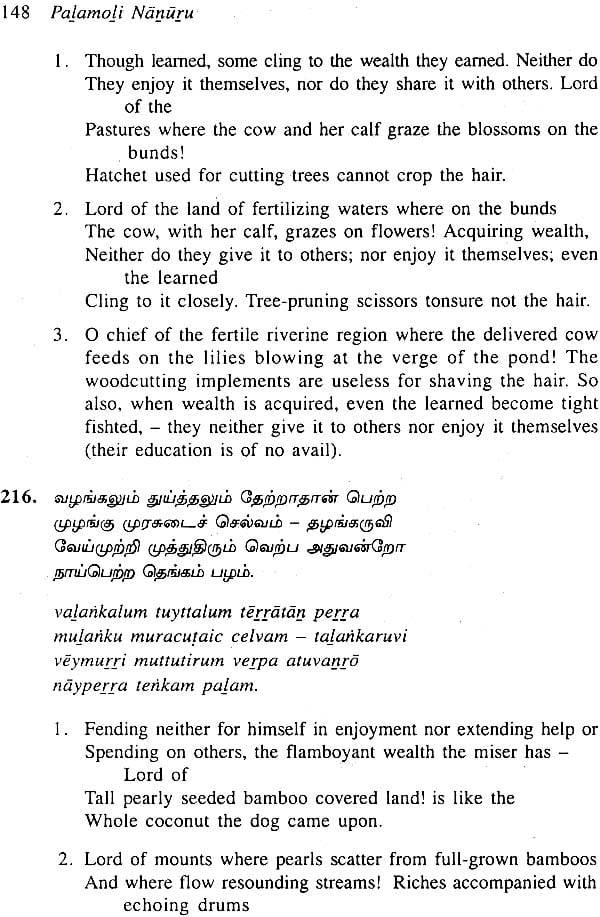