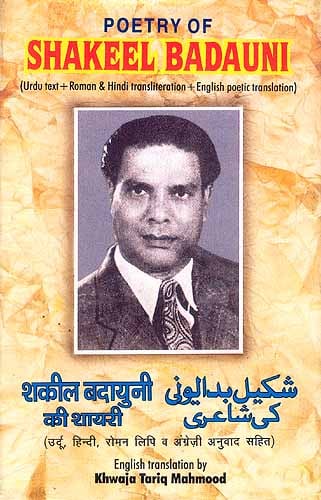 "Shakeel Badauni had been writing songs for Hindi/Urdu films for a very long time. In those years, he gave very healthy and meaningful lyrics to our films.

"I had the privilege of working in many of the films in which Shakeel Badauni had contributed lyrics. After the great poet 'Arzoo Lakhnavi' Shakeel followed the tradition and wrote literary and high-levelled songs in our films, and this made him a great Urdu poet in both literary and film world."

Khwaja Tariq Mahmood, born in 1927 at Chakwal, graduated in engineering from the Punjab University in 1947. He was commissioned in January 1948 in Corps of Electrical and Mechanical Engineering. Pakistan Army, and retired as brigadier in 1979. He graduated from Staff College, Quetta in 1956, and from Royal Military College of Science, Shrivenham. U.K. in 1960-61. He took his law degree in 1977 from Punjab University and Master's degree in International Relations in 1985 from University of Southern California, U.S.A.

Because of his great interest in Urdu poetry, Khwaja Tariq Mahmood has already compiled and translated the following collections:

He is now working on:

Shakeel Badauni was born in Badaun (U.P.) on 16th August 1916, and since his school days he had been participating in 'Mushairas' and other such 'mehfils'. He studied in Aligarh Muslim university, and had been awarded with various shields and certificates for his poetic activities. He did his graduation in 1942. He was a very sober person, far away from drinks and other such habits inwhich most of the poets are involved in.

In 1942, he shifted over to Delhi and joined All India Radio, which made him well known to the poetic world, and it was in 1946 that he met A. R. Kardar, a very prominent film producer of that time, who inspired him to write for films.

Shakeel Badauni was associated with music director Naushad in fiftees, and evensince then he was working with him. He had the privilege of having written songs for the top films 'Aan', 'Mother India', 'Ganga Jamuna', 'Mughal-e-Azam', 'Mere Mehboob', 'Chaudhvin Ka Chand' and many more. However, he maintained his interest in independent and literary writings and contributed greatly to Urdu poetry.

If we can study his poetry, we will find the meaningful and deep thoughts he depicted in his works.

The present collection is a representation of Shakeel Badauni's poetic works, which have been translated into English by Khwaja Tariq Mahmood who has compiled and translated works of many other Urdu poets also.