The Practice of Tibetan Meditation (With CD)

For centuries Tibetan Lamas have transmitted spiritual knowledge by teaching mind-training meditation. Dagsay Tulku Rinpoche now shares these rare jewels of Tibetan meditation techniques in an easy and accessible manner, leading the Western reader toward the path of true happiness.

Dagsay Tulku Rinpoche?s teachings range from introductory sessions designed to create an oasis of calmness in daily life to deep practices for cleansing and healing. He also offers traditional meditations to prepare for death, the ultimate transition. True to the rich, sensory nature of Tibetan Buddhism, these meditations are enhanced with instructions for relaxing massage and an accompanying sixty-minute CD of mantras.

Born in the Tibetan village of Tartsedo in 1936, Dagsay Tulku Rinpoche was discovered and recognized as the reincarnation of the previous Dagsay Tulku and brought to the famous Chokri monastery in eastern Tibet, where he came to serve as Chief Lama. Escaping persecution in 1959, he traveled to India, where he continued his studies and practice until-upon the request of the Dalai Lama - he accepted a post as the spiritual leader to a small community of Tibetan settlers in Switzerland, where he currently resides. Dagsay Tulku Rinpoche teaches courses in Buddhist meditation and performs blessings and initiations. In addition to introducing the West to the spiritual practices of Tibet, he has been actively involved in the rebuilding of the Chokri monastery in his homeland.

AMONG PEOPLE IN THE WEST, the need for inner peace has increased tremendously in recent years. As one of the first Tibetan Lamas to have settled in the West about four decades ago, I feel a great need to open the gate to Tibetan meditation, which comes from my experience as a monk in the spiritual world of a monastery and as a citizen of the world.

It is my innermost desire to pass on the valuable instructions for Tibetan meditation to everyone, regardless of creed or age, and to do so in a manner easily understood by everyone. Therefore, I wish to encourage people who are comfortable in their own beliefs to use Tibetan meditation as a means to strengthen their spirituality. I also recommend meditation to people who are not associated with any specific belief because they also can profit from it in many ways.

We are truly convinced that the sources of many of the adversities we face, including our own unhappiness, are external ones. Therefore, we frequently overlook the all- important inner perspective. Only after experiencing inner peace will we be able to radiate peace to the outside. In other words we then will be able to prominently contribute to a positive environment for ourselves and for the people around us. Thus, everyone has the potential to contribute to peace on earth. It is my deepest desire to see the greatest possible number of people choosing this path to peace.

With the help of this book on Tibetan meditation, I wish to provide practical instruction to all people in the world to achieve inner peace and serenity and lead them to the source of love and compassion. Only upon living in unity with this source and by taking from the source will we be able to radiate peace and contribute to positive surroundings.

WHILE LIVING IN THE CHOKRI MONASTErY in Tehor in eastern Tibet, I was accustomed to being treated with utmost respect because of my status as a reincarnation of one of the principal Lamas. It was taken for granted that the honorable Dagsay was to be served at all times and that he would not deal with ordinary people. That was to soon change. Thousands of my fellow citizens and I were forced to flee Tibet in 1959. We were housed in bamboo barracks in a refugee camp provided by the Indian government. It could have been a great deal worse but, luckily, I was allowed to leave the camp after a few months when I received a scholarship at the University of Benares. When I graduated at the top of the class, I received an offer to teach at the University of Allahabad. There was no question about accepting this once in-a-life- time opportunity, and I invited all my friends to a farewell party. Exactly one day before I was to leave, I received a personal note from His Holiness the Fourteenth Dalai Lama. He asked me to go to Switzerland in the position of a spiritual teacher for Tibetan refugees. This posed a dilemma. Again, this situation taught me how things are always changing and that happiness and sorrow will take turns in the eternal rhythm of life. It was a great honor for me to have been chosen by His Holiness to fulfill this task, and I decided to follow his calling. When I arrived at the airport in Zurich in 1963, I had no clue what was in store for me in that new world.

I was on a bus together with other people from my country, all of us there to build a new existence. We were all in the same predicament. Everyone soon got used to the new circumstances, and spiritual values were pushed temporarily aside by material needs, which, for the time being, made my role as spiritual leader superfluous. Thus, I had to look for another job. I found an apprenticeship in construction drafting, I met my wife, and we planned our future together.

Despite the fact that life with our three children was happy and content, I was frequently haunted by my escape from Tibet. Those events had left traces of deepest fear, despair, and helplessness that came to life in my nightmares. A daily practice of meditation and proper mental training enabled me, however, to transform those feelings of hate and aggression that were causing me harm into sentiments of com- passion and love.

My inner peace returned it happened in just the same manner as at the Chokri Monastery long ago. Colleagues at my work were frequently amazed at my inner calm and serenity even during intense moments when everyone else was on edge.

Without being consciously aware of the situation, I constantly benefited from the great treasure of Tibetan meditation, which created a positive environment and a basis for peaceful coexistence.

The two worlds I had experienced in my life were very different from each other: the eastern Tibetan world, dominated by the desire to obtain spiritual values, and the Western world, where material values are in the foreground. Yet both worlds have one thing in common: Tibetan meditation applies itself well to both ways of life. As the years passed, my experiences of monastery life in the East were augmented by those of everyday life in the West, and I became more and more con? vinced that the use of meditation could be completely independent of religion.

After twenty-two years, relations with China improved and I was able to con? tact my relatives at home. Soon there followed letters from my monastery.

I was asked to return home and resume my spiritual position as a Lama. Upon my arrival thousands of people were waiting for my blessings and initiations. This trip was to change my future life in Switzerland. My family and our relatives started to support the reconstruction of the monastery and, in addition, we began to work on the project of an adjacent clinic, which was to include a training center for Tibetan meditation. (More information is provided in the Seminars and Projects? section at the end of the book.)

My experiences as a Lama in the West have taught me that many meditations can be carried out not only on a spiritual level but also in secular fashion. When I was a monk inside the monastery, it was unimaginable for me to meditate for other than spiritual reasons. While living in the West, where many people are members of a different creed, or have no religion at all, I became aware that pos- sibly all people could make use of many of the Buddhist teachings.

To pass this knowledge on to as many people as possible, I have arranged it in such a way to make sense to everybody, whether they are Buddhist, non- Buddhist, a beginner, or an advanced student. These exercises are particularly helpful to people who suffer from the effects of today’s fast-paced life and who are under physical and psychological pressure. These meditations precious gems from the treasures of the higher Buddhist school of mind training? Are helpful in all kinds of circumstances. Whether you are feeling low because of a failure or a problem at work, because something is worrying you, or because you have an illness, these exercises will take an active part in pulling you up; when you are feeling great because you are in perfect health and have been successful and lucky, the exercises will keep you from becoming arrogant and losing your grip. 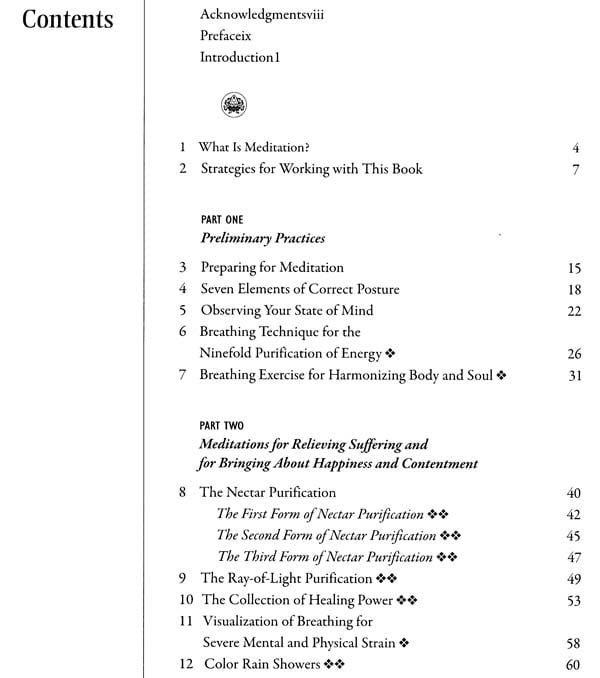 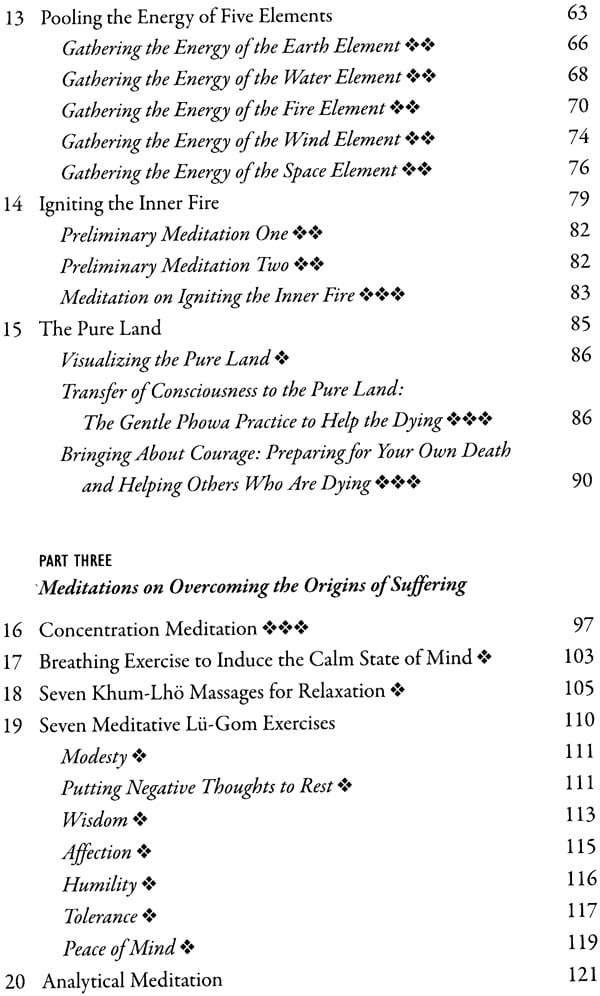 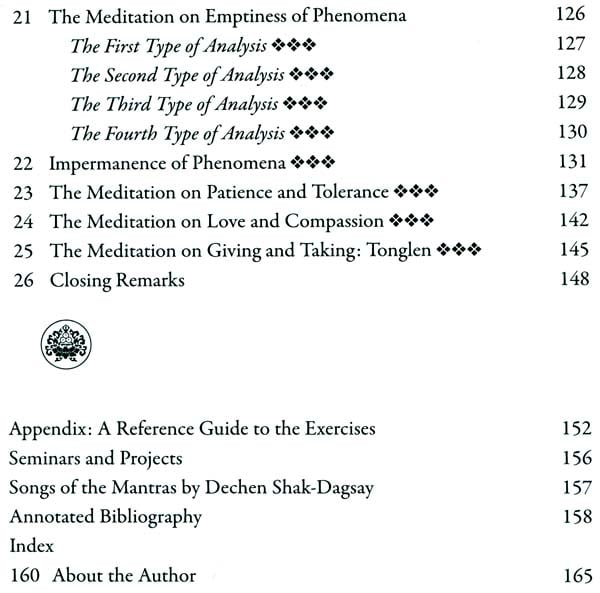 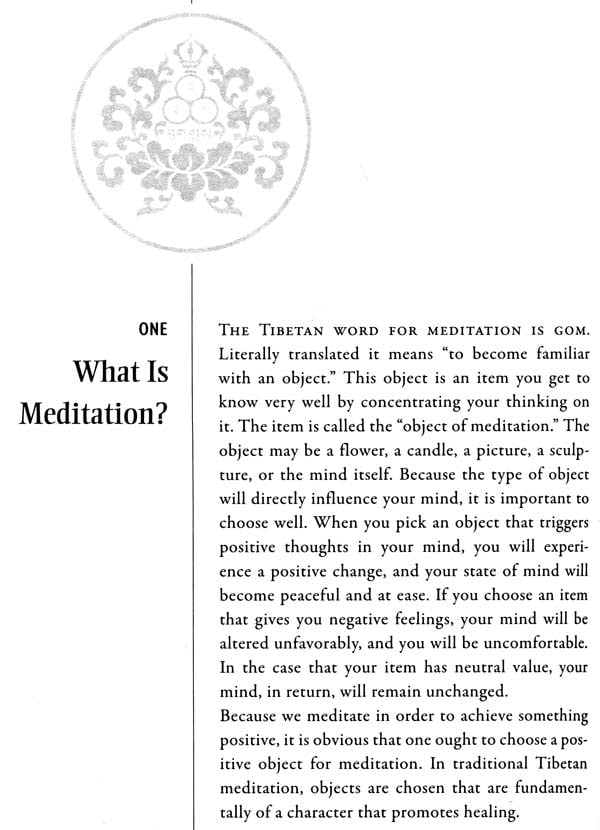 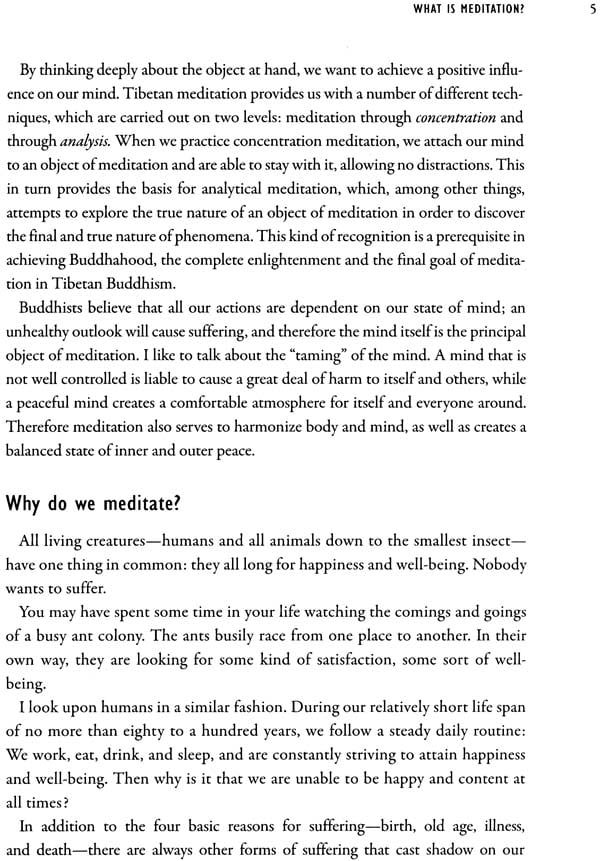 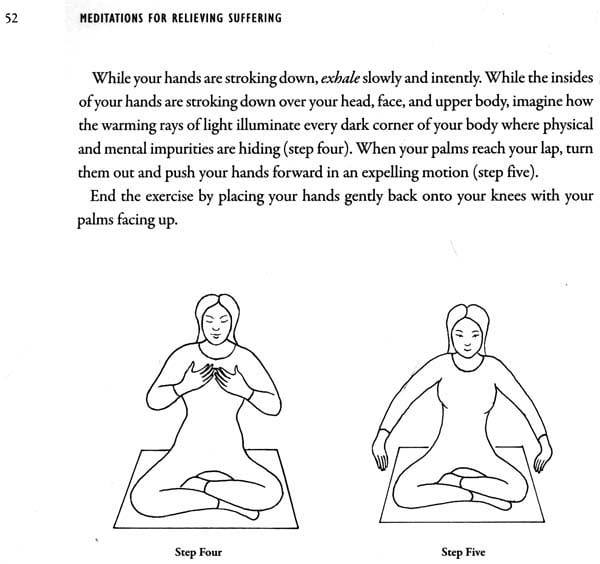 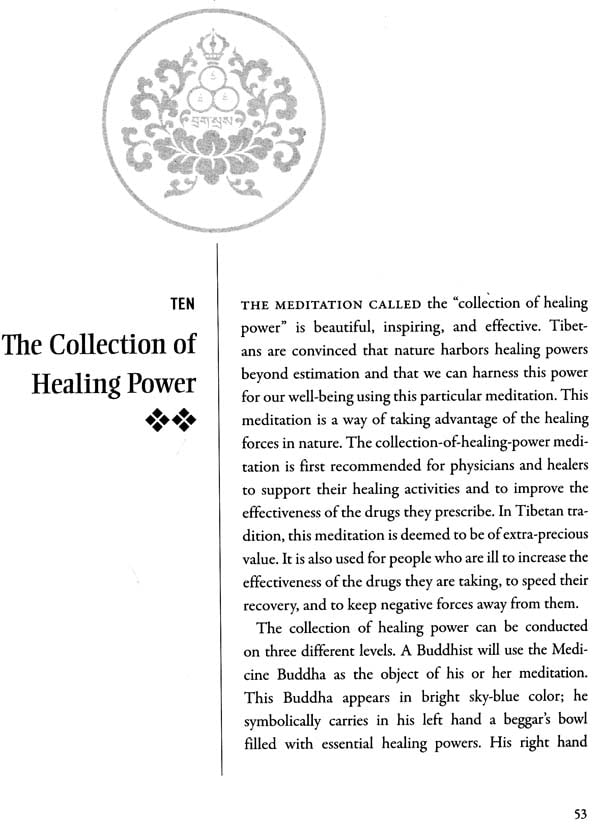 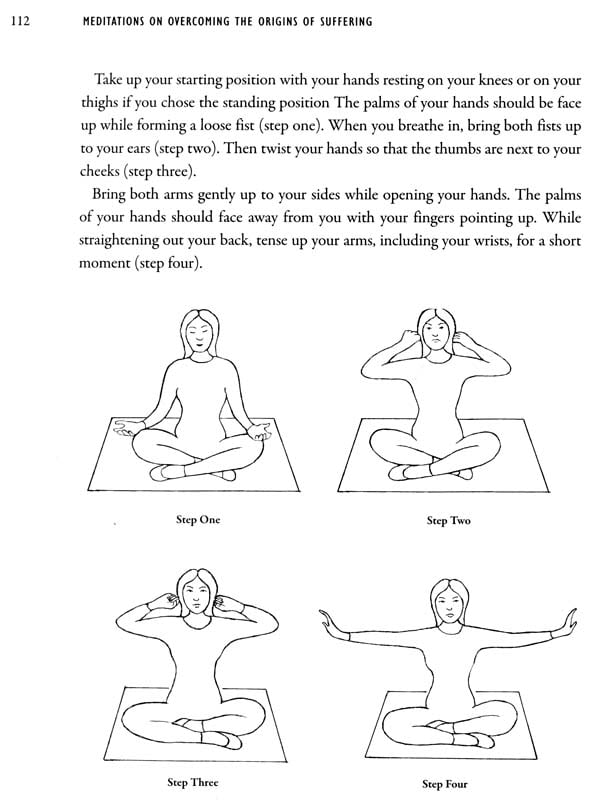 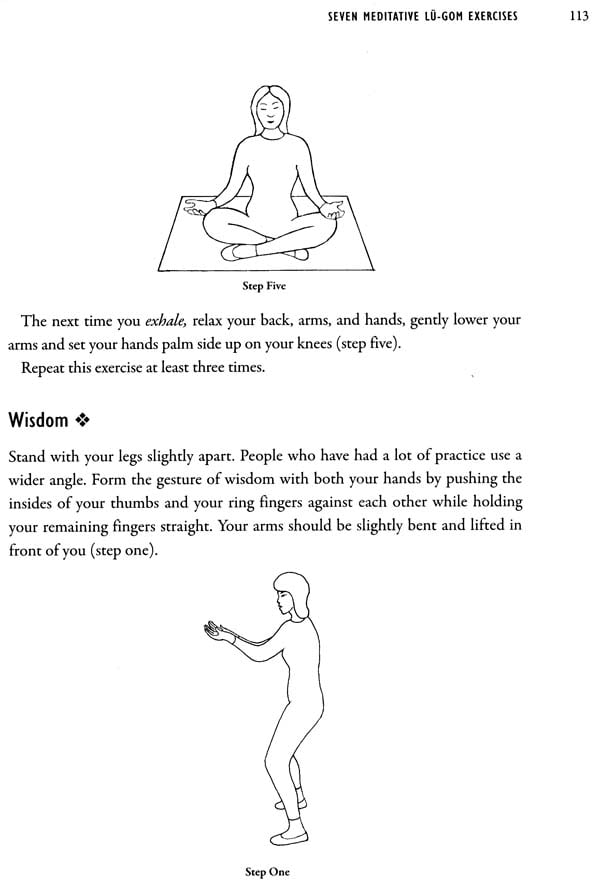 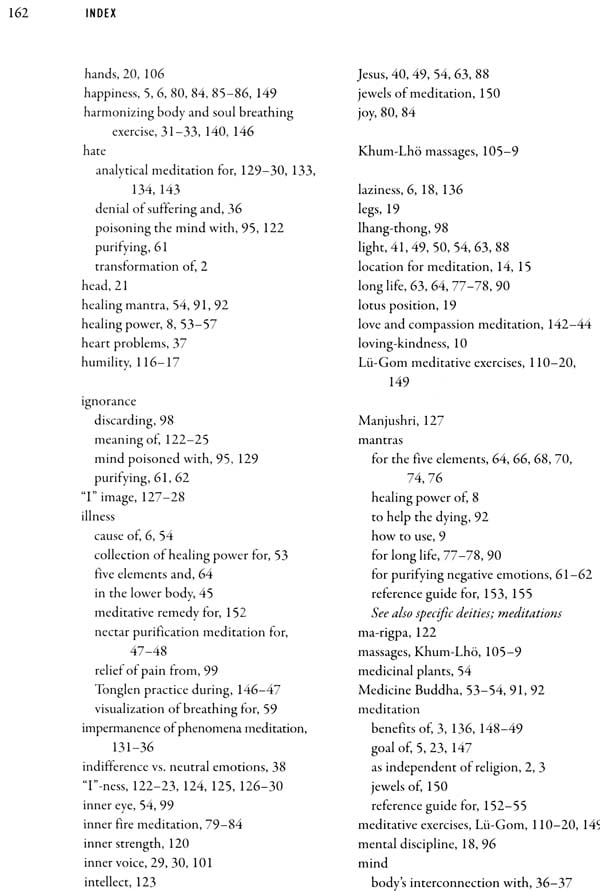 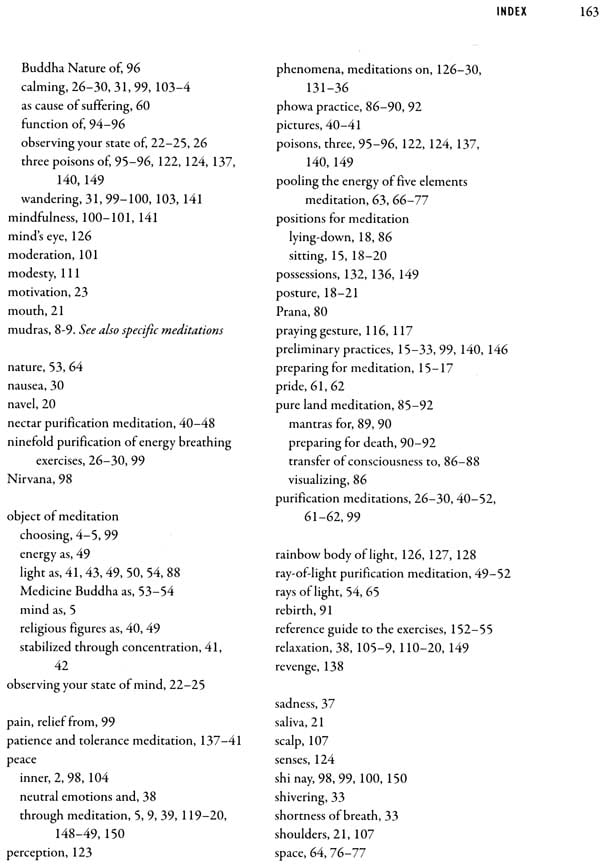 The Stages of A-Khrid Meditation (Dzogchen Practice of the Bon Tradition)
By Bru-sgom rGyal-ba g.young-drung, Translated by Per Kvaerne and Thupten K. Rikey
$20
FREE Delivery Meditation: The Gateway to Enhance your Health, Mental Abilities as well as Emotional and Spiritual Well Being
By Luis S.R. Vas
$15