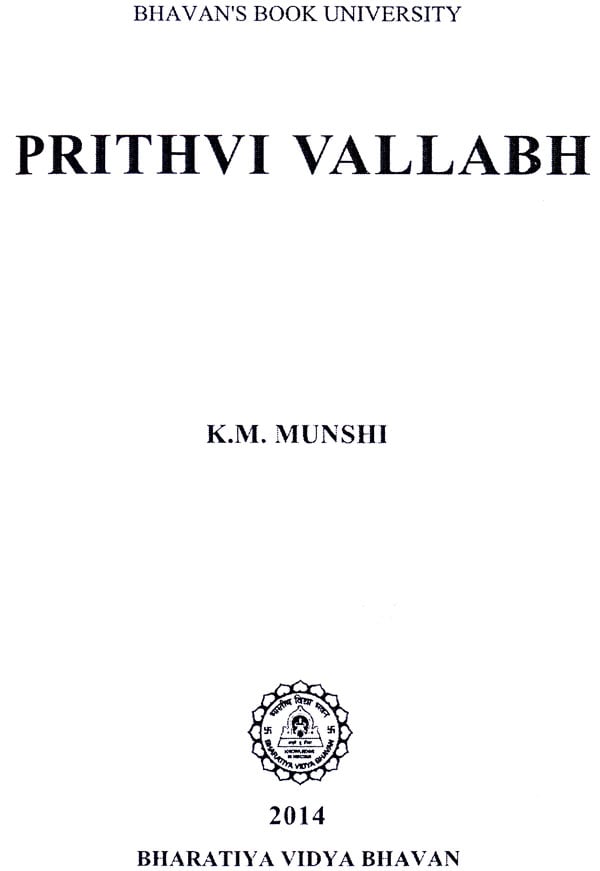 Kanaiyalal Maneklal Munshi’s versatility and achievement were in a way unique. He was an eminent lawyer, one of the framers of India’s Constitution and a seasoned statesman. Coming under the inspiring influence of Sri Aurobindo during his student days, Munshi had been an ardent fighter for India’s freedom, working at different stages in close association with Jinnah, Tilak, Besant, Mahatma Gandhi, Sardar Patel, Rajagopalachari and Pandit Nehru. His achievements as Home Minister of Bombay in 1937, as India,s Agent-General in Hyderabad before the Police Action, as India’s Food Minister and as Governor of Uttar Pradesh had been characterized by rare courage and decisive energy.

Acknowledged as the foremost writer in modern Gujarati literature, including novels, dramas, memoirs and history in Gujarati, as also several historical and other works in English, notable Gujarat and Its Literature, Imperial Gurjaras, Creative Art of Life, to Badrinath, The End of an Era, Krishnavatara, Bhagavad Gita and Modern Life, Saga of Indian Sculputure, Bhagawan Parashurama, Tapsvini, Prithvi vallabh, The Master of Gujarat, Jaya Somanath, Pilgrimage to Freedom Vols. l-ll and Foundations of India Culture.

Many critics have considered Prithvi Vallabh to be my best novel. It is not for me to say anything in this matter. However, when its English translation was serially published in the Bhavan’s Journal last year, readers had requested for its publication in a book-form.

Prithvi Vallabh had created a lot of controversy when it was first published. Gandhiji had gone through it in 1936, as a result of which some interesting correspondence ensued between us. This is annexed as an Appendix to the present edition.

Prithvi Vallabh is one of those works which, at places, is untranslatable on account of the differing genius of the two languages—Gujarati and English. Still my friend Shri H.M. Patel, I.C.S. (Retd.), who has rendered the book into English, has been successful in retaining the emotional intensity of the original to a large extent.

PRITHVI VALLABH is “the most typical” of Munshiji’s historical romances. More praised and more condemned than all his other novels, it has held the largest audience of them all. Apart from quite a few editions in Gujarati, it has gone into Hindi, Marathi, Bengali, Tamil and Kanarese. It has also gone on the Gujrat professional stage and survived about thirty years. It was picturised on the silent screen and again as a talkie which became one of the Minerva Movietone’s biggest hits and one of the Indian screen’s great masterpieces. (A dramatic version and a picture, both in Tamil, are now being prepared. There is also a Sanskrit dramatic version of the novels, which has been recently staged with considerable success.)

This novel is based on the few surviving verses of a twelfth century Gujarti historical romance inverse called Munjarasa, and on Munjaprabandha, a section of a well-know fourteenth century work Prabandhachintamani. In his Glory That Was Gurjaradesa, Munshiji has described Munja as a ‘quivering flame of beauty’.

From 974 to 997 A.D., Munja ruled the Paramara Empire which then comprised Malva dnd considerable parts of modern Gujarat. A great conqueror, builder lover, poet and patron of poets, his accomplishments have drawn fulsome tributes from many contemporary poets. Some of his verses are to be found in several books.

Thou source of voluptuous joys,

Home of the enactor of nobleness,

Thou wert the God of love to fair maidens.

Oh! brother unto the righteous,

Wherever thou art, wait:

“Prithvi Vallabh” is a prose-poem. It is an exquisite piece of art, expressing the rich and refined poetic sensibility of the author. Its main interest derives from the fatal love of Munja and Mrinaldevi, the widowed sister of King Tailap of Telengana.

Munja is cast in a mighty mould. He dwells on Olympus. In his exuberant vitality and overflowing humanity and in his attitude to life, we see the quintessence of the Life Force. He is all human and nothing can restrain his passion for beauty and his physical bonds are about to be dissolved, his mind rises to sublime heights.

The character of Prithvi Vallabh reminds us of the central figure in a Greek tragedy. Munja lying chained in prison is like Prometheus bounds to the rock. He shows the same indomitable spirit, and is as alive in death.

Mrinaldevi is an engrossing psychological study. Her progress from neurosis to health is one of the mainsprings of the story. In the delineation of her character are seen the author’s understanding of the complexity of the feminine heart, his deft handling of decisive changes in a spiritual crisis and his power to rehabilitate a lost soul.

The whole novel glow with a brillance which is the outcome o an intense personal experience. Voluptuousness enshrined in impassioned utterances of astonishing beauty and force, the interplay of colour and music, the voice of ecstasy and heroic energy characterise “Prithvi Vallabh”.

Munja, the great Paramara conqueror of Malva, who had routed Tailap, the king of Telengana, eighteen times, is finally vanquished, taken prisoner and brought to Manyakhet, the capital of Telengana (Malkhet near Hyderabad). The novel begins at this point. 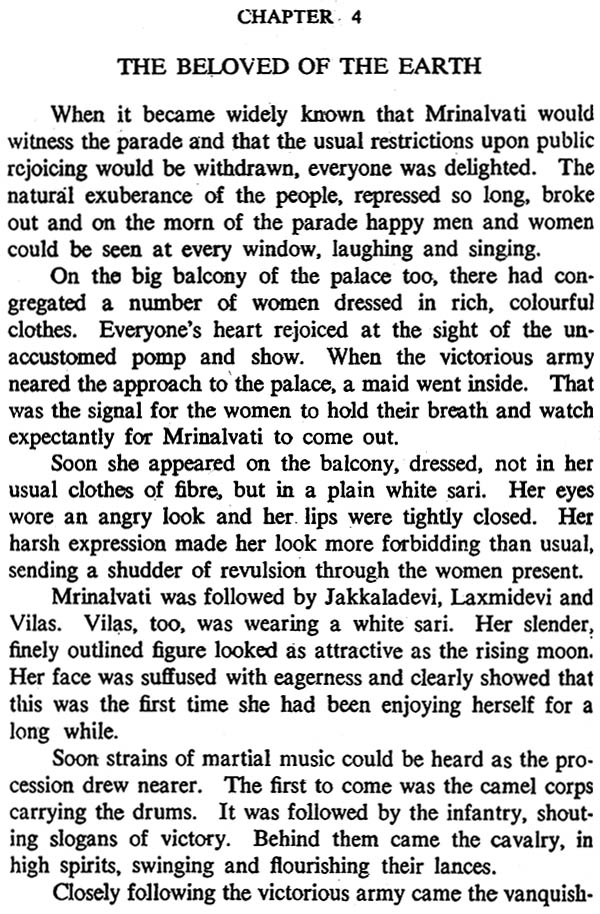 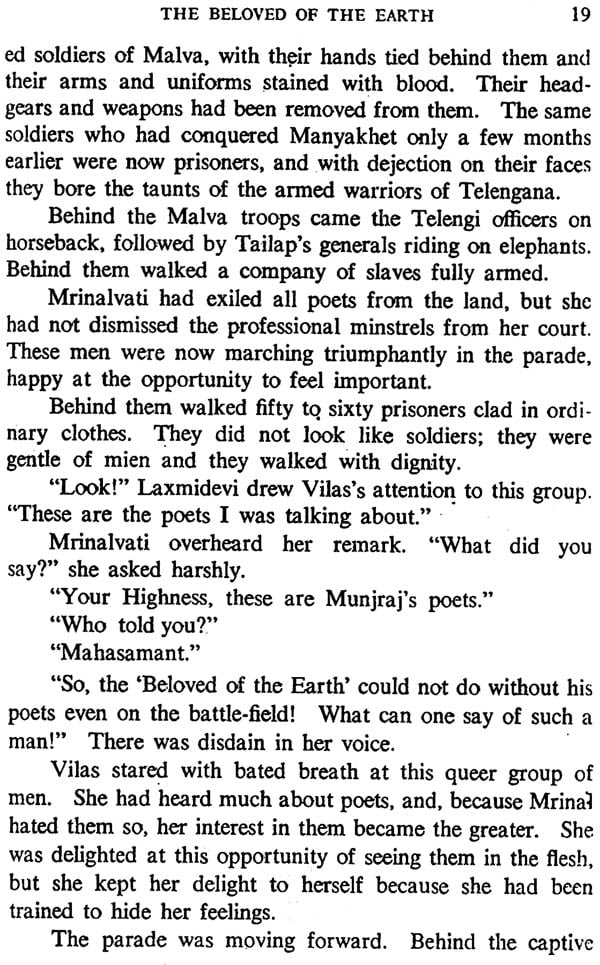 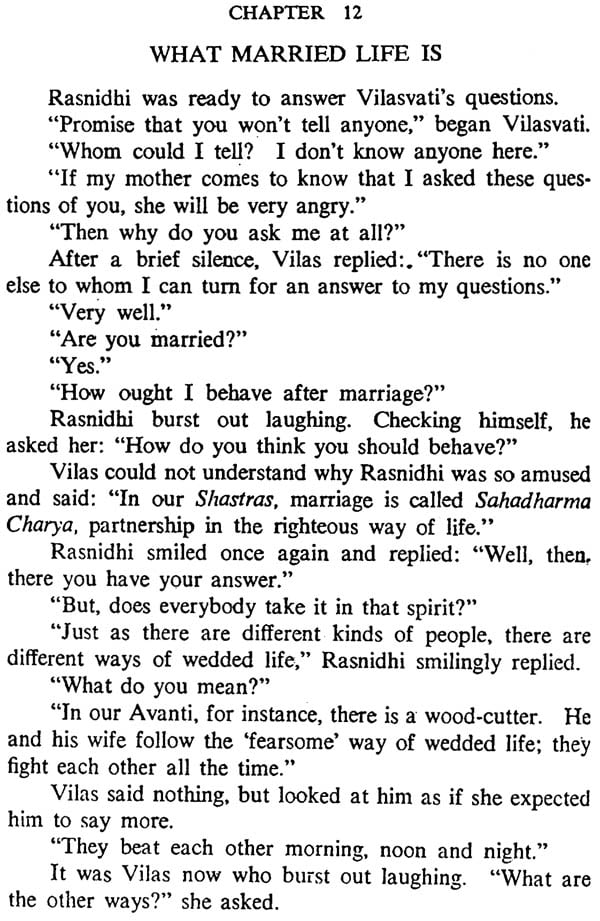 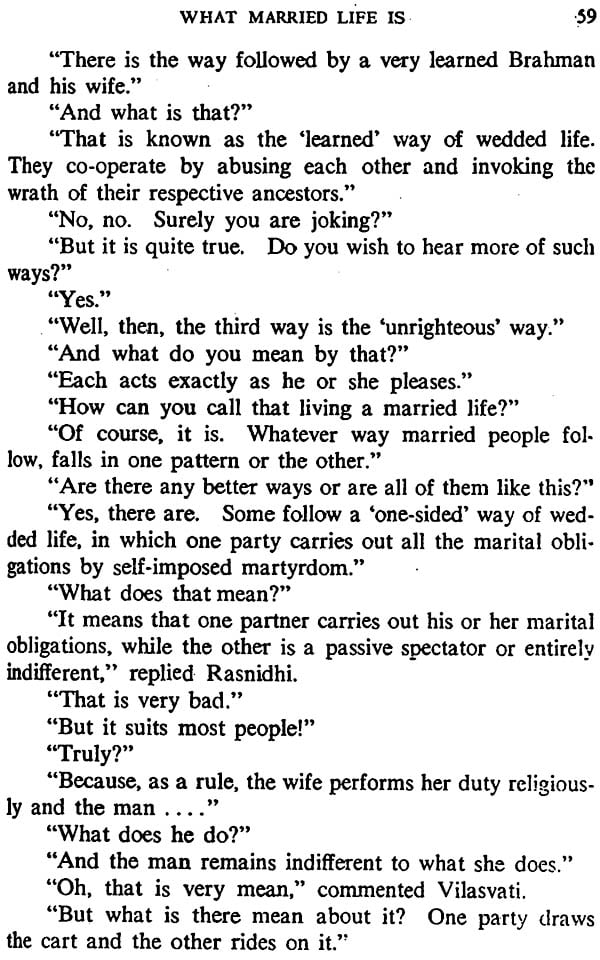 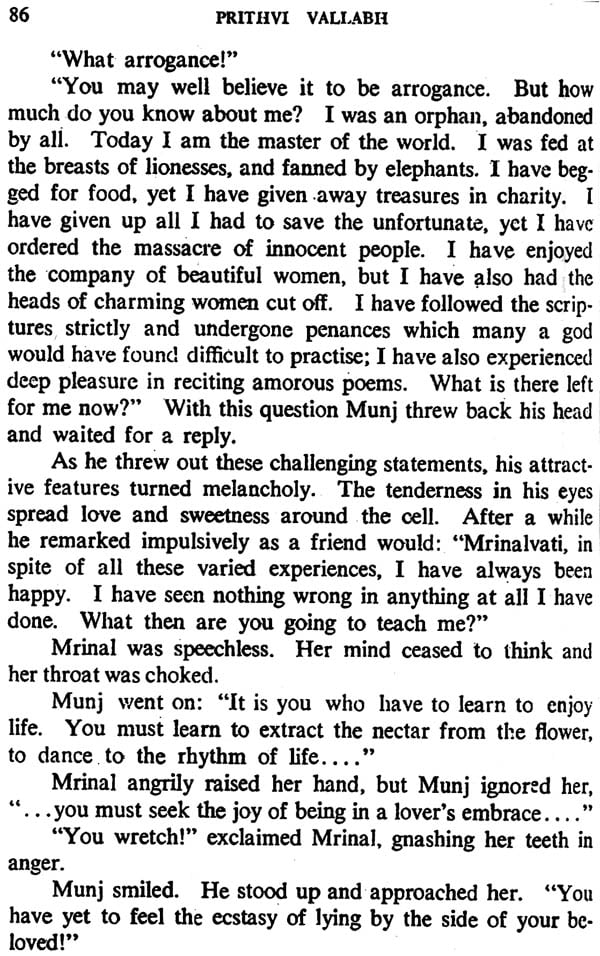 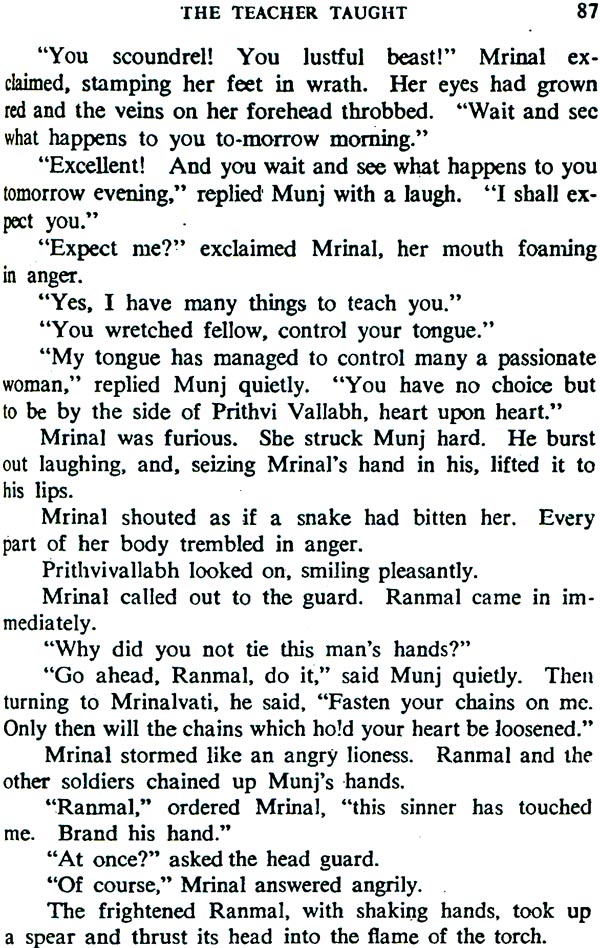 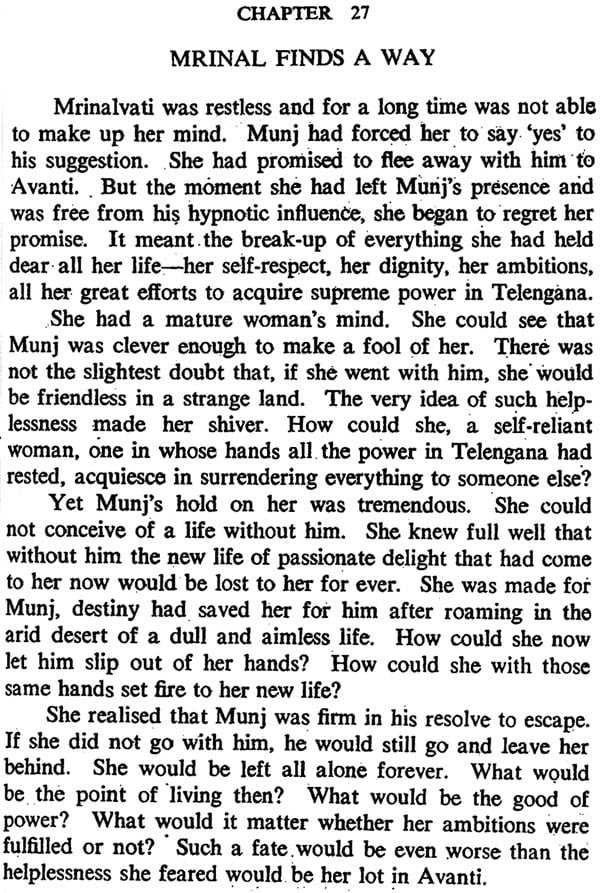 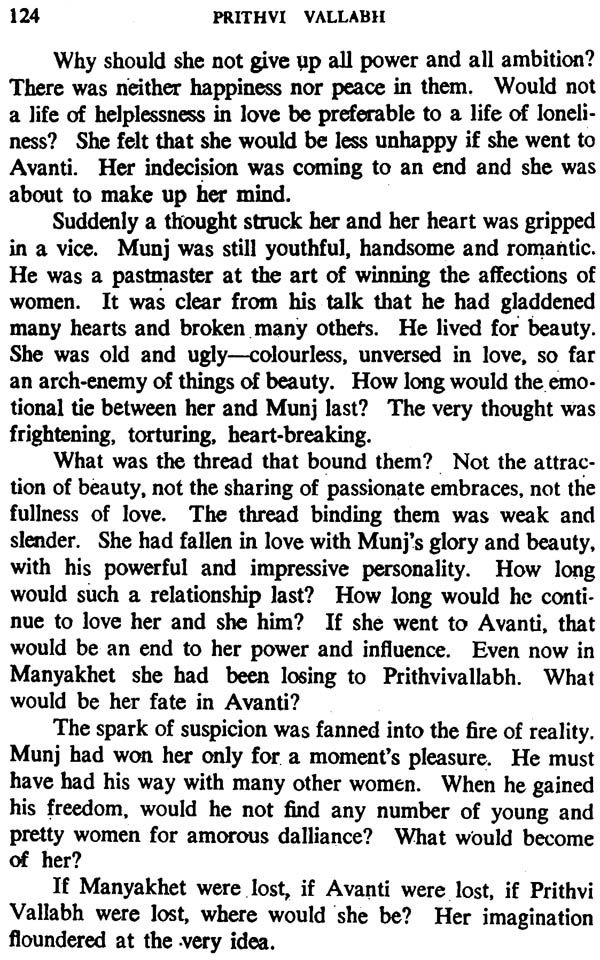 The Magic Flute (Krishnavatara Vol.I)
By K. M .Munshi
$16
Out of Stock