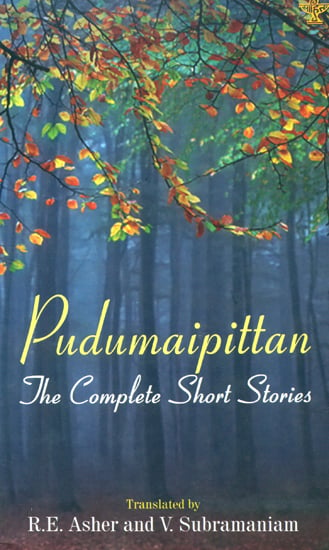 Pudumaipittan ( 1906-1948 ) was born in Thirupaathiripuliyoor, now known as Cuddalore town in Tamil Nadu. Spurning all comforts and luxuries of a coveted career in law, he chose the hard path of becoming a journalist.

The present volume is aimed at presenting the complete short stories of Pudumaipittan written during a short span of fourteen years. This anthology also includes the lone novella he left incomplete. His characters are dotted over a very large social canvas ranging from the destitute Ammalu, a penniless mill worker who has to take care of her invalid husband to the tea estate coolie worker Maruthi, compelled by circumstances to work in the tea estate and face all the travails of a coolie-life in distant Ceylon. These are of course random illustrations of the large canvas on which Pudumaipittan revelled in creating a fine blend of magical romantic satirical realism.

Pudumaipittan: The Complete Short Stories translated from Tamil by R.E. Asher and V. Subramaniam is a commandable anthology of its kind.

R.E. Asher is Professor Emeritus of Linguistics, University of Edinburgh, and also visiting Professor of several universities in India, the USA and France.

Prof. Asher's stupendous contribution include his publications Malayalam (Routledge 1997), The Encyclopedia of Language and Linguistics (Pergamon Press 1994), Atlas of the World's Languages (Routledge 1994, with C. Moseley), Colloquial Tamil (Routledge 2004, with E. Annamalai), and The Encyclopedic Dictionary of Speech and Language (Wiley-Blackwell 2005, with John Laver et al.) among others.

He is a recipient of the medal of the College de France, and is also fellow of the Kerala Sahitya Academy, Royal Asiatic Society and Royal Society of Edinburgh and Honorary Fellow of Sahitya Akademi.

Vridhachalem Pillay Subramaniam is involved in teaching English language and literature at various levels for more than forty years. Holding M.A. and Ph.D degrees, he was trained in E L T in Deccan College, CIEFL and Edinburgh. He is recipient of the UNESCO Fellowship in Pedagogy and a British Council Bursary in Microteaching. He evolved a new concept of transmemes as part of Ethno- methodology.

I am glad to accept the invitation from Professor R.E. Asher of Edinburgh University and his co-translator Dr Vridhachalempillay Subramaniam of Chennai to go through the final draft of the translated stories of Pudumaipittan in English. I find it challenging as well as most inviting. I am happy to be associated with this work.

The name of Pudumaipittan has become a household name in all the Tamil speaking Diaspora cultures far beyond what one can imagine. His stories are so realistic and faithfully reflect the stark realities of the natives of Tamilnadu and Ceylon (now Sri Lanka) of his times. I am not too very sure if he ever set foot in that neighbouring island which has had several centuries of close historical and socio-political association with the Indian sub- continent. But his picturesque descriptions of the Waterfalls tea estates reminds me of the beautiful landscape of several tea gardens and coffee estates in tropical countries such as India, Ceylon, Burma and Malaysia, where almost all the working class hail from Tamil families. The working class people who were identified by their below-poverty GDP factors by the erstwhile colonial rulers of those times were conveniently bundled into swarming armies of muted "indentured labourers" whose sole possession was a few half-starved human skeletons by their side. We, in Mauritius, have full empathy for the lot undergone by Maruthi and Vellachi in the story "tunbakeni" because of the very similitude of experiences undergone by several of our own forefathers and their grandmothers in the sugarcane fields of this charming island before they managed a roof of their own. One is reminded of the strong sensibilities echoed by the poet Subrahmanya Bharathi whose verse on the plight of these poor folks in the midst of exploitations of human nature are so graphically described in his lyrics. There is no doubt that the tales describing the ruthless and selfish group of Kanganis, who returned to their motherland sporting the glistening metals around their neck and waist, symbolic of their rewards for their servile behaviour towards their Masters in addition to the ruthless ill treatment of the daily wage workers under their charge are true. There is no doubt that the patterns of ethics and morality in human relationships smacked of their own base carnal desires. The nature of tragic experiences we find in the stories of Pudumaipittan reveal his choice of realism as his preference over romantic fascination for dreaming unrealities, as we often tend to come across in the modern formula-oriented box-office - focussed Bollywood-type of movies.

As a student of European literatures and those of Dravidian languages especially in Tamil, i can very well imagine the impact of the emerging style of short story over the creative writings of several other genres of literature. But I wish to state very convincingly that Pudumaipittan was not by any stretch of imagination a duplicating machine of the style of O. Henry, Allen Poe, James Joyce, Leo Tolstoy, Anton Tchekov, Maxim Gorki, Guy de Maupassant, Anatole France and Prosper Merimee to name but a few. In the course of that valuable historical survey, Ka. Na. Subramanyam establishes very clearly the place of Pudumaipittan among the group of pioneers and pathfinders who followed the trio of Subrahmanya Bharathi - V. v. S. Iyer - and A. Madhaviah in ushering a new narrative format and style. He points out that, "It was in the thirties that the short story came in to its own in Tamilnadu. The group of serious writers of short stories acknowledged their indebtedness to V. v. S. Iyer and set about ushering in the era of the short story in Tamil. Pioneers and path- finders in this wave of the short story were Na. Pichamurthy, Ku.Pa.Rajagopalan, Pudumaippittan, Mowni and nearly a dozen others. Their theories and their high seriousness were however questioned by a group of writers who approached the story as of other writing as wholly for purpose of entertainment or as handmaids to propaganda of a political or social nature. Chief among the entertainers and propagandists should be mentioned Rajaji and Kalki".

Whereas Pudumaipittan had a very different agenda in his mind. He issued a blunt "Warning" as an Introduction to his collected stories published in 1943 that, "these stories were not written as the result of a vow to bring about cultural uplift, not as a kind of service to the reading public. They are merely stories. Neither I nor my stories have the least desire to save the world or to enrich our culture. This is an anthology of episodes reflecting what I have heard, seen dreamt, and wanted to see and also what I have not wished to see." (1943)

In this respect Pudumaipittan provided a sharp foil to the transparent statement of didactic objectives mentioned by George Bernard Shaw in his Prefaces to Plays. No such ambition seemed to have operated within the mind of Pudumaipittan. He felt there was an urge to weave these stories as he wished and that is all about it. No fuss beyond that stand point of view. A straightforward intellectual commitment.

In an interesting and analytical approach to the relationship between language, truth and literature, Richard Gaskin has a thought- provoking observation :

"Fiction is not the kind of thing you can lapse into unwittingly: it has to be specially secured by intentionally engaging in a quite specific cultural activity, the activity of fiction making. And making fiction is a success story; it is not a failure to do something else."4 Extending that logical proposition to Pudumaipittan's depiction of literary humanism makes profound sense. His characters whether truly alive or not (Sanku Thevan, C.I.D. Inspector Vittal Rao or Marudappan Maruththuvanar, Vellachi, or the mysterious entry and exit of Kanchanai, Melakaram Me. Ka. Raa. Kandasamippillai, and the most unbelievably magnificent Brahmaraakshas, and more such creations) carry with them an indelible stamp of reality which cannot be relegated to the realm of figment of one's feverish imagination. They are the real heroes and heroines who transform those episodes of Pudumaipittan uniquely human. This makes one agree with the more current concept of literary humanism from a metaphysical point of view :

"According to the literary humanist, works of imaginative literature have an objective meaning which is fixed at the time of their production and which is the same for all readers, then' and thereafter, not subject to the vagaries of individual readers' responses. Such works refer to the real world and make statements about that world which are of cognitive as well as aesthetic value; the two kinds of value are indeed intimately connected." 5 I am happy to endorse an authentic piece of fiction translated. 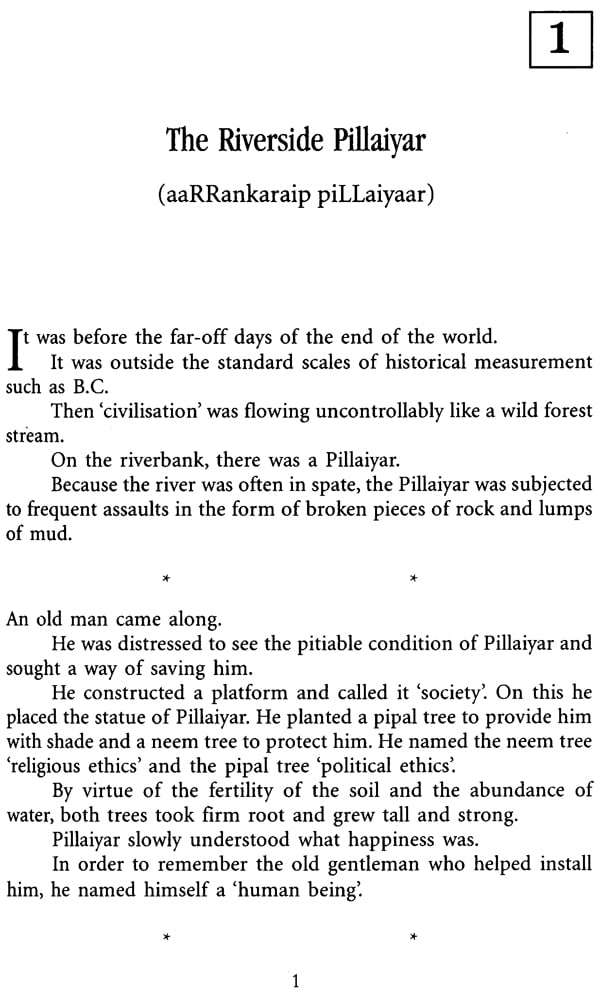 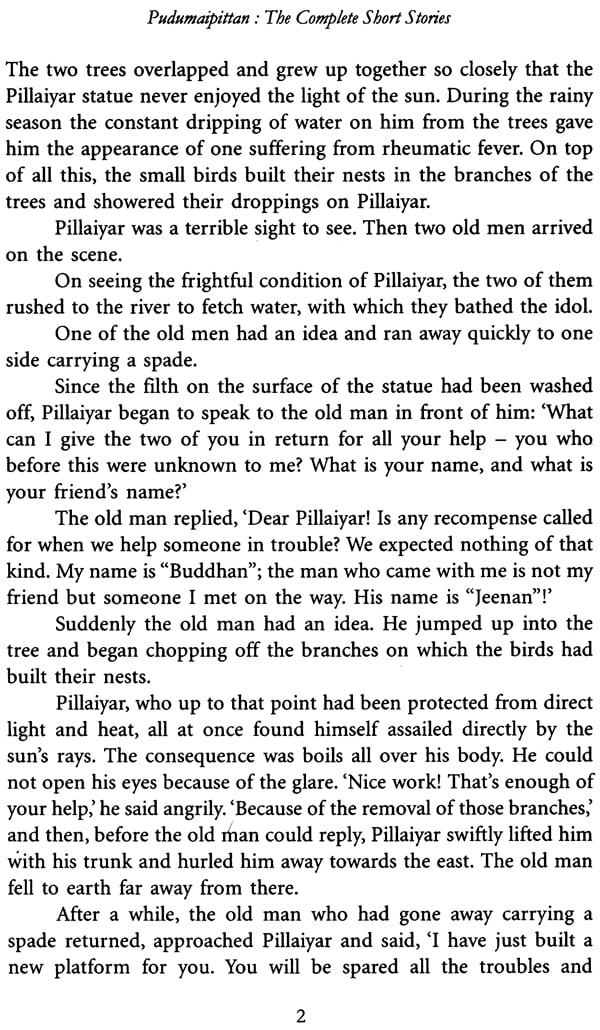 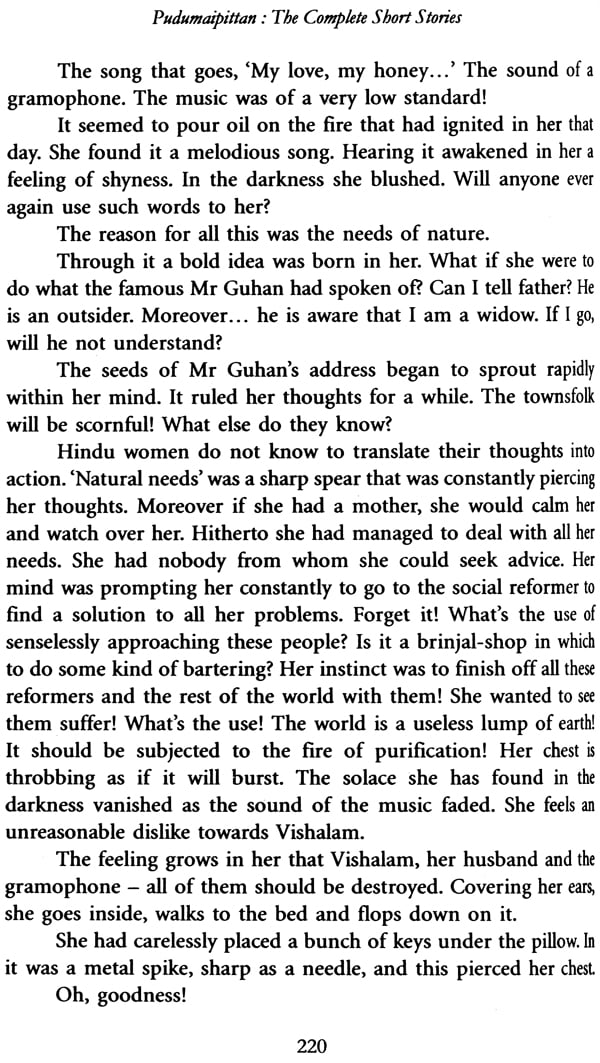 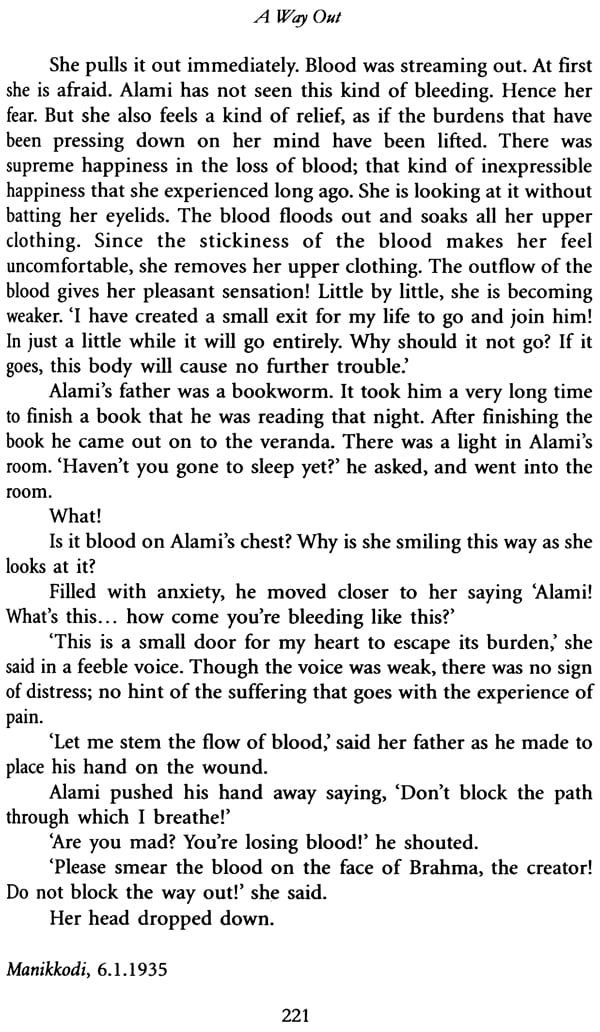 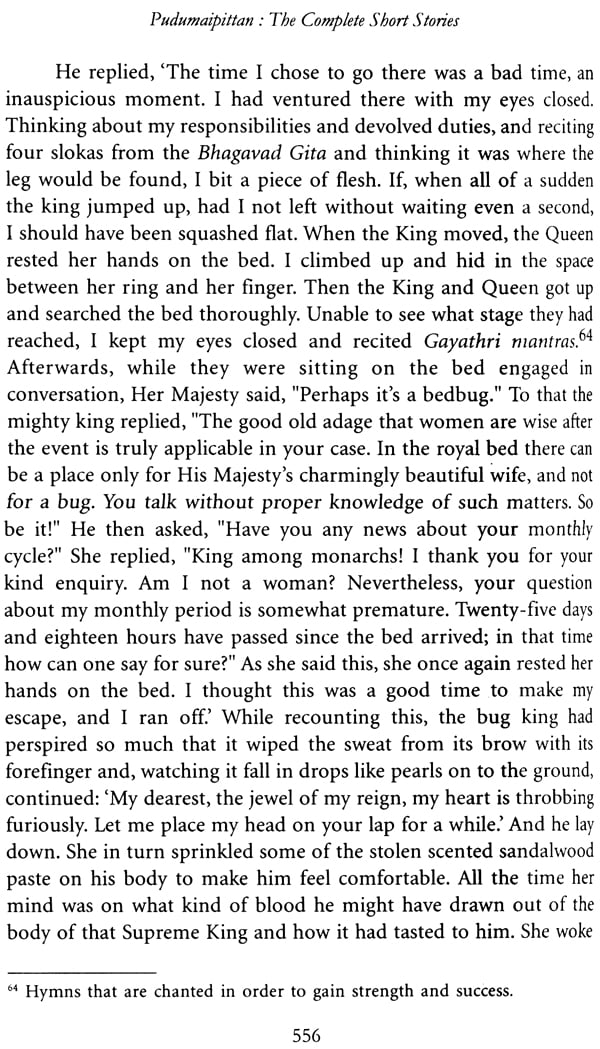 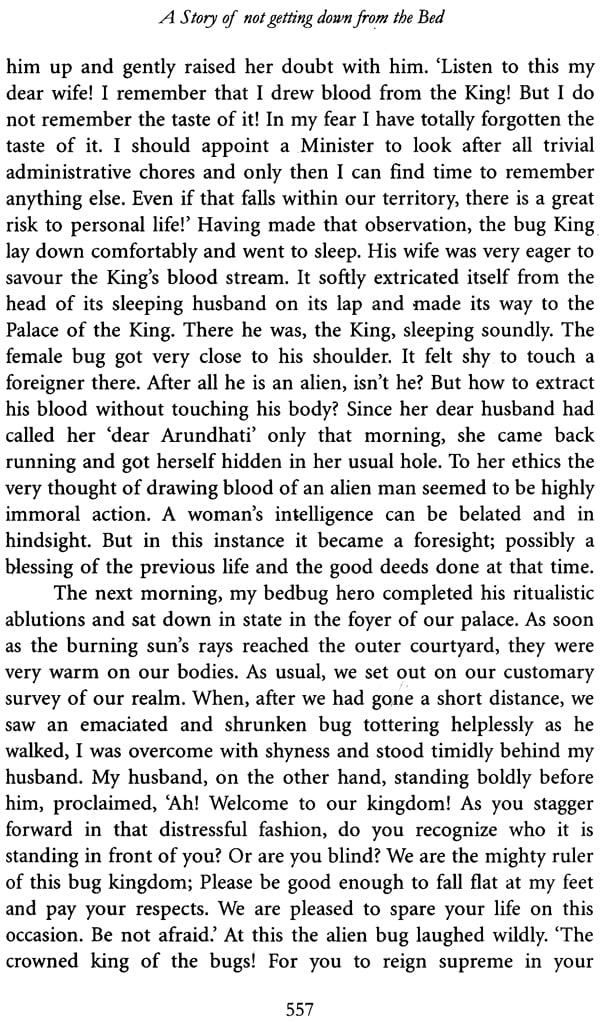 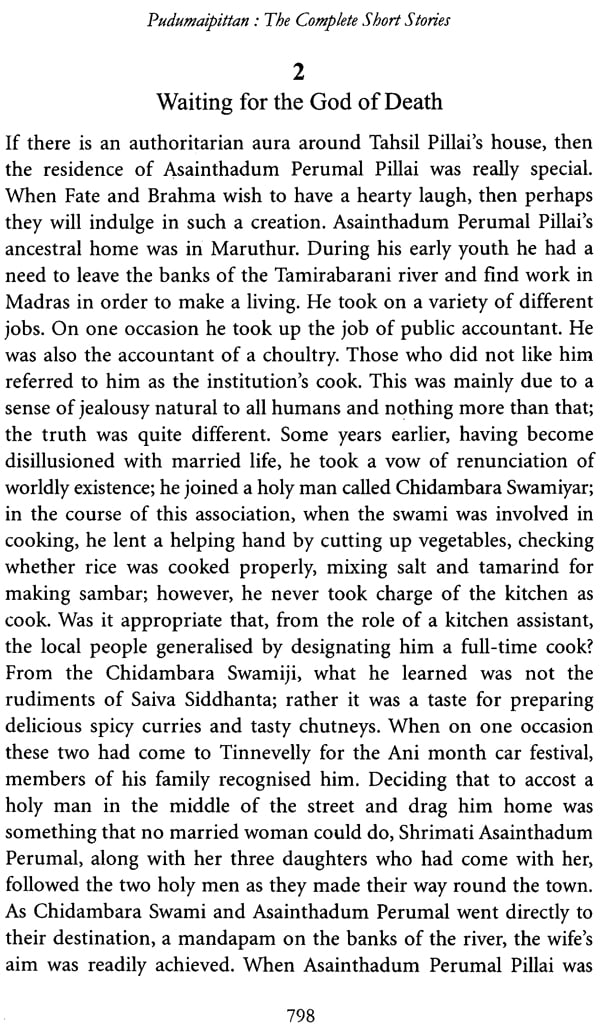 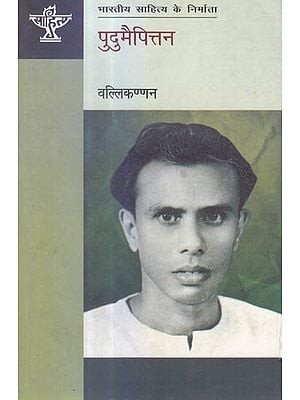 A Movement for Literature: Sahitya Akademi Award-winning Tamil Treatise
By Ka. Naa. Subramaniam, Translated By: Venkat Swaminathan
$10.50
$14  (25% off)
Add a review
Have A Question