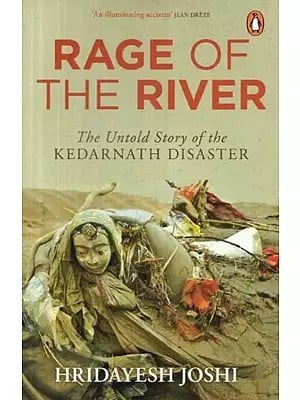 Rage of the River : The Untold Story of the Kedarnath Disaster

On 17 June 2013, a normally calm Mandakini came crashing down from the hills of Uttarakhand and destroyed everything in its path: houses, bridges, dams and the town of Kedarnath. Thousands of people perished and lakhs lost their livelihood. Three years after the disaster, stories from the valley-of pain and sorrow, the state government's indifference and the corporate goof-ups, the courage and heroism shown by the locals in the face of an absolute catastrophe-have remained largely unheard of till now. While the government continues to remain in denial and chooses to ignore the environmental issues in Uttarakhand, the ravaged Kedarnath valley still haunts us-though the temple has been restored, given its religious importance and centrality to the local economy.
NDTV journalist Hridayesh Joshi covered the floods in 2013, exposing the government's apathy and inefficiency. He was the first reporter to reach Kedarnath after the disaster and brought to light the stories from the most-remote parts of the state: areas cut off from the rest of the world. Woven into this haunting narrative is also the remarkable history of the ordinary people's struggle to save the state's ecology. Rage of the River is a riveting commentary on the socio-environmental landscape of Uttarakhand and is filled with vivid imagery of the calamity.

Hridayesh Joshi is the senior editor, national affairs, in NDTV India. When disaster struck Kedarnath in 2013, he was among the first to reach there. Joshi stayed there for weeks and travelled the length and breadth of Uttarakhand covering the calamity. A recipient of the Ramnath Goenka Awards for Excellence in Journalism, Joshi reports often on natural disasters and environmental issues. He has also covered the war-torn Banat in Chhattisgarh extensively, where the central and state forces are locked in a fierce battle with Maoist rebels.
Vandana R. Singh is head, English language dissemination, in IL&FS Skills, an organization involved in skill development, capacity building and upscaling the employability quotient of youth.

The gravity of the Kedarnath disaster in June 2013, which killed thousands of people, shocked the public almost to the point of numbness. For Uttarakhand, the land of the gods, it seemed unbelievable that pilgrims as well as their village support teams, human and animal, should have been so unfairly singled out for nature's unbridled wrath. What provoked this calamitous reprisal and why were the gods so uncaring of human life? What went wrong in Kedarnath and were the gods alone to blame for such a calamity? Or did human folly contribute to the devastation? These questions and, more importantly, hog to prevent the reoccurrence of the tragedy are the subjects of this aptly titled study Rage of the River.
It is a thankless task for any dedicated journalist to reveal unpleasant facts that challenge society's image of itself. Hridayesh Joshi's original work in Hindi, an eyewitness account of an early arrival on the scene, caught the horror of the moment and inspired the urgency of the need for a better official response, which an English translation can help fulfill. Unlike the bland prose of official reports, Rage of the River is alive with a blow-by-blow record of the agonies of several individuals who suffered the fallout of the mighty Himalayan slopes collapsing all around them. Hridayesh interviews the survivors and tells as of the sacrifices made initially by commercial helicopter pilots, until the armed services woke up to the severity of the challenge. Trainees and staff of the Nehru Institute of Mountaineering in Uttarkashi come in for commendation for their heroic performance that is estimated to have saved thousands of lives.
By contrast, a national disaster organization set up for emergency relief floundered, merely providing a token display of help. The slow response of official agencies and their misleading coverage is enquired into as is the role of the media in striving to find a balance between news and sensation. The latter's failure to report that hill stations like Mussoorie and Nainital entirely escaped the fury of the elements resulted in a lack of tourist arrivals, necessitating the cruel laying off of hotel staff who returned home to find their villages ruined.
The Kedarnath deluge as a configuration of fate can be interpreted as a sign of divine judgment on human avarice; a grim reminder that setting foot on Dev Bhoomi without due regard for the environment invokes a harsh penalty. Recently, the Shankaracharya of Dwarka attributed the cause to the moral turpitude that his puritanical conditioning associates with 'honeymooning couples'. But romantic notions in their innocence fall far short of the mercenary realities of the quick-buck mentality, which cashed in on the golden goose of yatra pickings. Also, some pilgrims with a bad conscience from the hoarding of black money sought to assuage their guilt by making the hazardous journey.
Before the coming of the motor roads in the 1960s, the pilgrim ethos was something else and involved the sweat and satisfaction of trekking. Formerly, villagers from the plains, after a darshan at Haridwar, walked to Kedar and Badrinath and back in three weeks to become fully acclimatized and, of course, elated by their achievement in beating the odds. By the late 1980s, the bus rushed the pilgrims from Rishikesh to the doors of Lord Basin in one long, bilious day, exposing the plains villager to oxygen deprivation. The arrival of the Maruti car swelled pilgrim traffic exponentially but, instead of an encounter with eternity, the god of time became the chief object of worship. Missing out on all the traditional cultural sites, the soul of the car-borne pilgrim inevitably felt short-changed by an itinerary that bypassed the beauty of the way.

The mighty river looks like a mere thread from the mountaintop. A vast, sandy landscape stretches below us, with big blocks and boulders visible from the riverbed. As we come down the road, our car hits a bumpy patch. We are forced to alight the vehicle just before Sonprayag, an important spot on the way to Kedarnath, situated at the confluence of the Mandakini and a tiny stream, the Songanga. The sangam town looks like a frail patient recovering from a long illness.
In June 2013, when the mountain came down tumbling across the Kedar valley and the rivers breached their banks, places like Sonprayag were completely destroyed. Most of the infrastructure including-shops, hotels, rest houses, and bus and car parking lots had been swept away. An eyewitness in Sonprayag recalls, 'That day, the raging Mandakini brought so much mud, silt and heavy stones with it that at many places the riverbed rose as high as fifteen metres! Men, women, children, vehicles-all were buried under the tremendous amount of debris brought down by the river.
Today Sonprayag is slowly limping back to life. Wrapped in layers of gloom since the devastating floods, only recently it has begun to radiate hope again. The continuous thud of hammers breaking the boulders along the riverbank can be heard across town. The bulldozers ply up and down to clear the stones and sand, so the ground can be leveled. More than a hundred labourers work all day building a huge parking lot for the vehicles that will ferry the pilgrims in the 'coming days. A few metres away, the construction of a new bridge-connecting Sonprayag to Gaurikund-is underway. The construction of this bridge here means the old pilgrimage route will soon be replaced by a new one.
As we moved towards the Kedarnath shrine via Gaurikund, Bambara, Jangalchatti and Bheembali, we found that even the spirit of the people seemed somewhat dampened. The 2013 Kedarnath disaster had affected them at every level-geographically, economically and psychologically.
Before we discuss the 2013 disaster in detail and the revival of the state as well as reconstruction of the Kedarnath valley, let us first know the geography of the hilly state. Uttarakhand is home to both mountains and forests. Because of this there are as many as fifteen mighty watercourses, binding the state in a watery web-the Tons and the Yamuna in the west,-and the Gori and the Kali in the east. Streams that emerge from the Himalayas in Uttarakhand form the upper Gangetic plain, supporting livelihood of millions in north India.
These rivers and streams form an integral part of one of the most important and ecologically fragile biospheres in the world.