Lakshmana Sarma sat at Bhagavan’s feet for more than twenty years. More than that, he was one of a privileged few who had the opportunity to study one-on-one with Bhagavan. Indeed Sarma was the only devotee who received extended and comprehensive instruction from the Master on the subject of Bhagavan’s master –wok, Ulladu Narpadu . Devotees then and since have Sri Sarma’s commentaries in high esteem and indeed Bhagavan himself approved of Lakshmana Sarma’s Sanskrit translation of his teachings.

This expanded fourth edition includes the complete Sanskrit verses Sri Sarma translated under Bhagavan’s careful guidance. Additionally, it includes a previously unpublished text we wrote as an introduction to Revelation as well as his translation of what he called the ‘Little Revelation’ (Upadesa Undhiyar) which is also being printed for the first time.

Born the same year as Bhagavan in 1879, Sri K. Lakshmana Sarma did his intermediate studies in his native Pudukkottai, obtained a Bachelor of Arts degree at Tiruchirappalli, and a law degree at Madras. From his early school days, he evinced an interest in Sanskrit and, in due course, became proficient in it. He worked as a civil lawyer for the government, was a courageous social reformer, and form 1918 was committed to Mahatma Gandhi’s freedom movement. While residing in Pondicherry (1920-25), he developed and promoted the natural healing system called Nature Cure. He founded the English monthly, The Life Natural, and his major work, Practical Nature Cure, became a standard textbook for students of natural medicine.

In 1927 Lakshmana Sarma came to Bhagavan, revering him as the embodiment of both Lord Dakshinamurti and Sri Sankaracharya. He surrendered to him completely and lived with him for more than twenty years, delving deeply into his teachings. After having received personal instructions from Bhagavan, he was exhorted to write a Tamil commentary on Ulladu Narpadu, which in due course received Bhagavan’s imprimatur. Bhagavan once remarked, “Everyone is saying that Lakshmana Sarma’s commentary on Ulladu Narpadu is the best. Nobody has studies Ulladu Narpadu the way Sarma has.”

Sri Lakshmana Sarma preferred the pseudonym ‘Who’ in order to leave open the question as to who the actual author was, Bhagavan or himself. His Tamil commentary was published in 1936 and Maha Yoga, in 1937 and subsequently, Guru Ramana Vachanamala (in Sanskrit and English). Sri Lakshmana Sarma passed away at the ripe age of 85 in 1965 after along life dedicated to Sri Bhagavan.

Life in the world consists of two stages or paths, namely that of pravritti or going forth into the Iabyrinth of selfishness, getting more and more entangled in worldliness thereby having to suffer chronic misery instead of the longed-for happiness ; and that of nivritti or returning to one’s home in God, the source of one’s being, thereby becoming re-integrated in Him, which is the essence of what is loosely called deliverance from bondage. In the former, souls are unaware of the truth, namely that the Self is one with God, the impersonal Being whom the sacred lore describes succinctly as Sat-Chit-Ananda (Reality-Consciousness –Bliss) and hence is perfect, without wants. This idea of separateness is the root of all evil and of all sorrow as it involves privation of the happiness, which is the very nature of the Self, in virtue of the identity of the Self with that Impersonal, all comprehending Being, called God. To fill up the void thus caused, the soul seeks pleasure from sense-objects in the world outside. These pleasures seem to him to be the substance of happiness, but which is not true because happiness, being the very nature of the Real Self, is uncaused and therefore does not need to be sought. Whosoever has access to this happiness in any degree is in that degree free from the fascination of pleasure-giving objects. Indeed Bhagavan tells us that even the worldly pleasures are pleasures only because of the access to that inner source of happiness, which it’s momentarily obtained when a desire is fulfilled.

Hence the pursuit of happiness in the world outside is a mistake, and a very serious one, for it results in more and more privation of true happiness. This growing privation aggravates the craving for worldly pleasures. A further consequence is that these pleasures become less and less satisfring, so that the misery that is due to separation from one’s source, namely God, becomes chronic and unbearable.

It is at this stage that a few souls, by God’s grace, become aware that the quest for happiness in the outside world is a mistake. Guided by that same grace they take to the path of nivritti, which ultimately leads to the attainment of the natural state, the true state of the Self, commonly known as deliverance from ignorance and bondage. This is the end of the separation from God, the root cause of all evils.

Naturally the aspirant when taking this path needs a guide, a guru. And the only proper guru is the one that has himself reached that state and abides in it all the time without intermission. Such a one is called a jivan mukta which means one, who, even during life, is ever in the natural state called sahaja samadhi. Such a one is Bhagavan Sri Ramana Maharshi. One who is able to recognize that Bhagavan is so has the right to study this Revelation, which Bhagavan himself designated as ‘Light on the Truth’ (Sat-Darshanam). This holy text, the original of which is in Tamil, is the most important of all the written teachings of Bhagavan, our ‘Sat-Guru’. Before composing this text, Bhagavan gave the same teaching to a devotee-disciple named Sivaprakasam Pillai, which appears in print under the title Who Am I?, and which serves as an introduction to the study of this Revelation. Bhagavan also composed a short work of teachings in Tamil called the Upadesa Undiyar, which may also be studied by way of preparation for the study of Revelation. A free translation of the latter is given in the Appendix.’

The Master, while wholly approving of all the paths followed by aspirants, tells us that these are not direct paths to the goal. He gives the reason in one of the verses in the Supplement (Anubandha). In these other paths, the aspirant starts with an assumption that is not true, namely, that the Real Self is just identical with the so-called soul, which is indistinguishable from the ego, and is hence subje Consciousness-Bliss is free from all imperfections. In the direct path as taught by him, no assumptions are made about the Self, and so there are no self- created obstacles to be overcome. All that is needed is to become aware of the Self as He is, and for this, the direct path is the quest of the Self (the Source wherefrom the I-sense arises) by fixing the mind on one of two questions, ‘Who am I?’ or ‘Whence am I?’.

In the Chandogya Upanishad this direct path is very briefly indicated by one very short sentence, “He has to be sought by the resolve to become aware of Him”. Even in that place the technique is not explained. Nor is it even mentioned clearly in any of the commentaries or independent text books, prakaranas, which are extant. Hence we may say that Bhagavan’s teaching on this point is unique.

There is another point on which Bhagavan’s teaching is much clearer than any other source, namely, in the distinction between the sahaja nirvikalpa samadhi — the natural state free from thoughts — and the yogic kevala nirvikalpa samadhi, a state likewise free of thoughts. The former alone is the state of deliverance and not the latter; in the latter the mind is not dead, but remains latent, so that it could revive again and cause bondage, as explained in verse 13 of the shorter Revelation, the Upadesa Undiyar. This is explained in detail in the proper place.

The substance of Bhagavan’s teaching, which is otherwise exactly the same as that of his predecessor, Bhagavatpada Sri Sankaracharya, is here summarised:

All the ills of the worldly life are the outcome of the primary ignorance, by which the body, composed of the five sheaths, is identified with the Self, so that all the defects and limitations of the former are transferred to the latter; this is improper, because the Self is pure spirit, Consciousness, not only distinct from these sheaths but also quite unconnected with them. The Self is therefore timeless and spaceless, the Transcendental Reality, which is the substratum of the world-appearance, which is not real in its own right, but only because it has Reality for its substratum, which is alone real. The Self therefore is ever-free and perfect, and does not need to be freed or perfected. By following the direct path, the mind — the agent of ignorance — is dissolved in the Self, bondage and all the ills of life are transcended, and the Self is realised as Pure Consciousness-Bliss without wants or limitations.

Obstacles to the successful pursuit of the quest consist in thoughts going out to the world in various ways, These thoughts are rooted in the long-cherished, deep-rooted belief that the body and the world are real in their own right. In order to still the mind and engage it in the quest, it is necessary to prevent these thoughts from arising. And this can be done only by substituting for the above mentioned false belief, the opposite belief, that the world, as a whole and in all its parts, is not real in its own right; it is rather an obstacle to the quest. Thus forms, distinctions, time, space, fate and its opposite, free will and the individual soul are taken up one by one and shown to be unreal. Thereafter the technique of the quest is explained in three verses, 27 to 29. The remaining verses of Revelation give some teaching concerning the natural state, not with a view to giving a positive description of it, but to remove misconceptions about it that have prevailed among various schools of Vedanta. The Supplement clarifies a number of points, which are mostly of practical value. 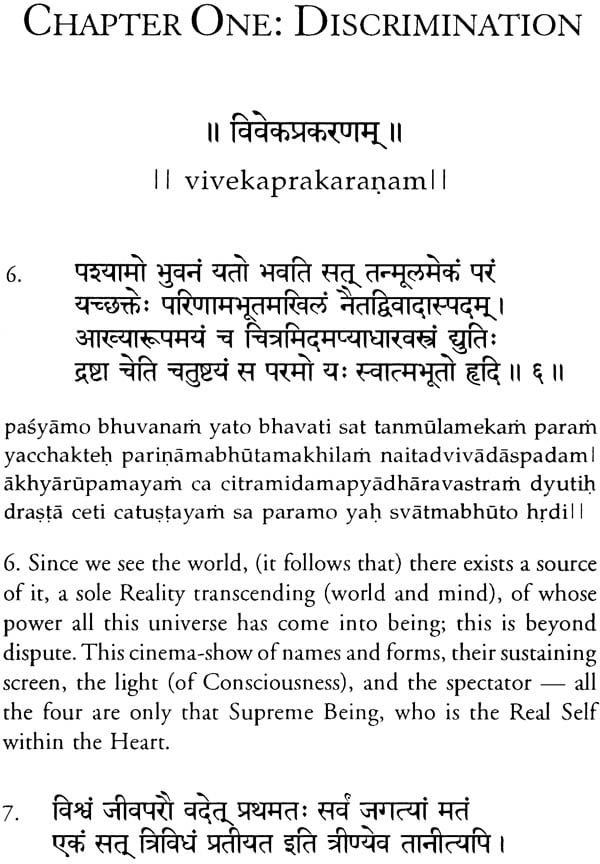 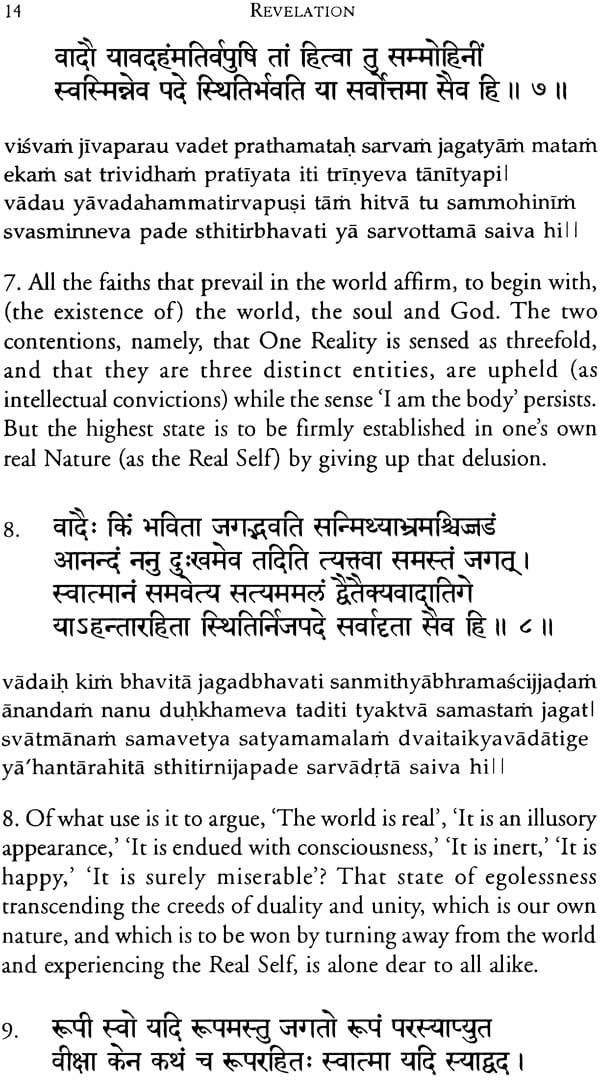 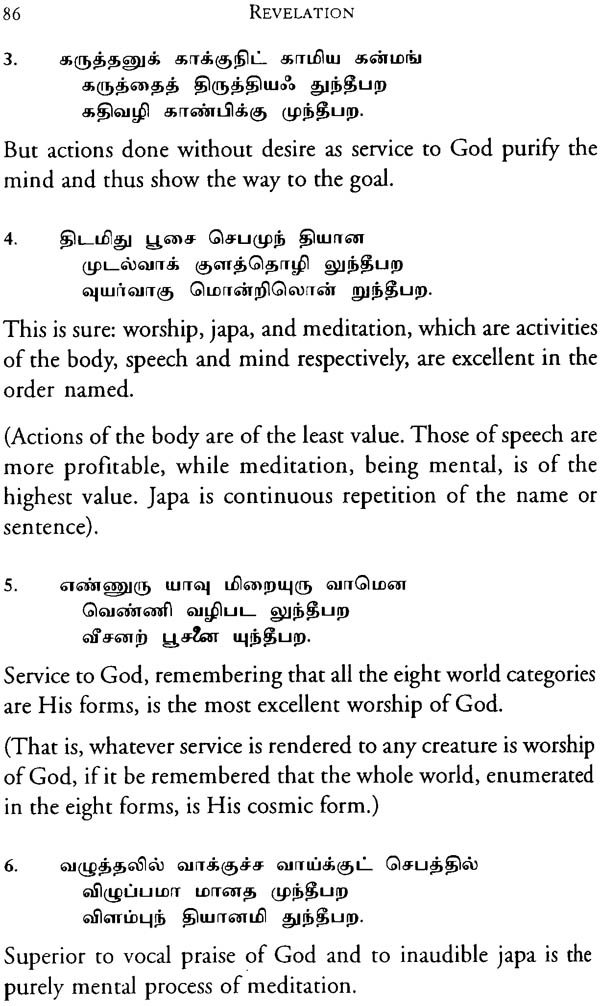 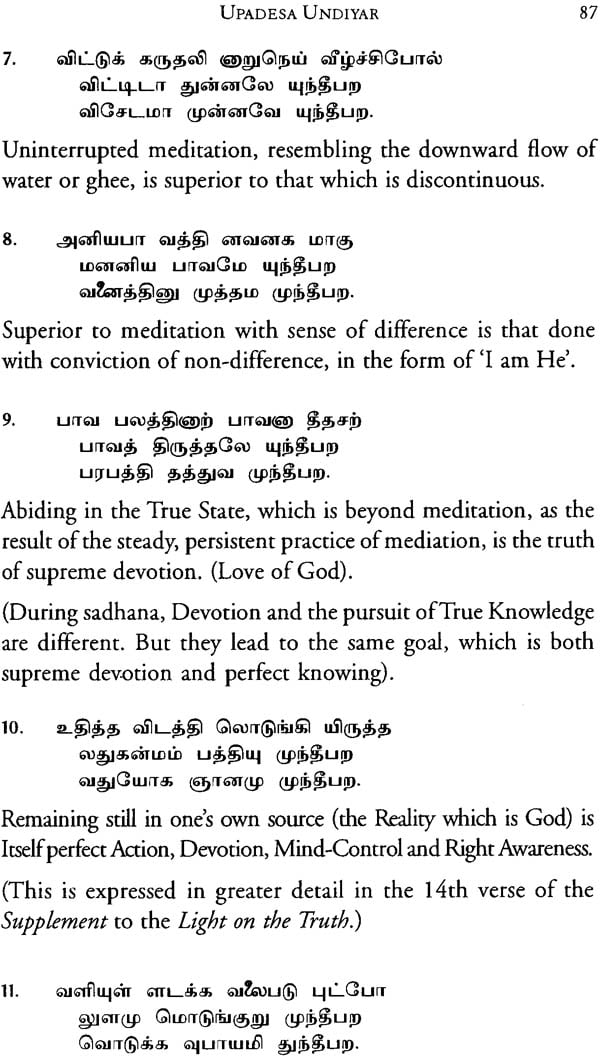 Homage To The Presence Of Sri Ramana (Sri Ramana Sannidhi Murai) (A Garland of Adoration)
By Sri Muruganar And Translated From The Tamil By Prof. K. Swaminathan
$22
FREE Delivery Karma Marga – In Bhagavan Ramana’s Own Words
By A.R. Natarajan
$8 Ramana Maharshi and His Philosophy of Existence
By Dr.T.M.P. Mahadevan
$18