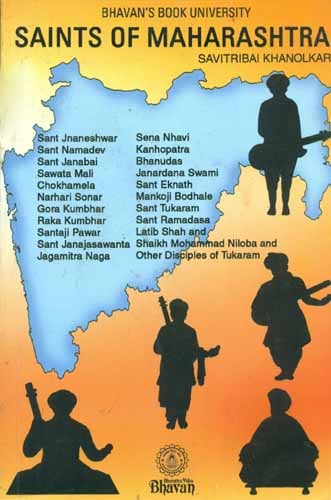 Born on July 20, 1913 to a Russian mother and a Hungarian father, Smt. Savitribai Khanolkar acquired Indian citizenship after her marriage to the late Major-General Vikram R. Khanolkar, brother of Dr. V.R. Khanolkar, noted cancer specialist and a former Vice-Chancellor of Bombay University.

Though a non-vegetarian by birth, Smt. Khanolkar, even as a child, preferred vegetarian food. Nature and its beauty thrilled her; she adored the sun and sea. All along she felt she belonged to India. Impelled by her intense spiritual yearnings, she set out in search of a guru. The momentous meeting with her guru, a direct disciple of Sri Ramakrishna Paramahamsa "all my doubts and a joy never before experienced flowed into my heat".

Though a foreigner, in course of time, she so identified herself with the Indian way of life and thought that she could not think of being anybody else except an Indian.

Eva, as she was known before she married, learned Indian music, Sanskrit and Kathakali. She speaks Marathi like a native and is proficient in Hindi. Besides her mother tongue, she knows English, French and Italian too.

After her husband's untimely death in 1952, she repaired to the Ramakrishna Vedanta Ashrama in Darjeeling and later settled down in Maharashtra. It was during her stay in Wai that she developed a great reverence for the Saints of Maharashtra and was inspired to write about them. This book is a collection of the articles that appeared in the Bhavan's Journal to which she is a regular contributor.

The Bharatiya Vidya Bhavan-that Institute of Indian Culture in Bombay-needed a Book Univer- sity, a series of books which, if read, would serve the purpose of providing higher education. Particular emphasis, however, was to be put on such literature as revealed the deeper impulsions of India. As a first step, it was decided to bring out in English 100 books, 50 of which were to be taken in hand almost at once. Each book was to contain from 200 to 250 pages.

This scheme, involving the publication of 900 volumes, requires ample funds and an all-India orga- nisation. The Bhavan is exerting its utmost to supply them.

The objectives for which the Bhavan stands are the reintegration of Indian culture in the light of modern knowledge and to suit our present-day needs and the resuscitation of its fundamental values in their pristine vigour.

Let me make our goal more explicit:
We seek the dignity of man, which necessarily implies the creation of social conditions which would allow him freedom to evolve along the lines of his own temperament and capacities; we seek the har- mony of individual efforts and social relations, not in any makeshift way, but within the frame-work of the Moral Order; we seek the creative art of life, by the alchemy of which human limitations 'are progressively transmuted, so that man may become the instrument of God, and is able to see Him in all and all in Him.

In this series, therefore, the literature of India, ancient and modern, will be published in a form easily accessible to all. Books in other literatures of the world, if they illustrate the principles we stand, for, will also be included.

This common pool of literature, it is hoped, will enable the reader, eastern or western, to understand and appreciate currents of world thought, as also the movements of the mind in India, which, though they flow through different linguistic channels, have a com- mon urge and aspiration.

Fittingly, the Book University's first venture is the Mahabharata, summarised by one of the greatest living Indians, C. Rajagopalachari; the second work is on a section of it, the Gita, by H. V. Divatia, an emi- nent jurist and a student of philosophy. Centuries ago, it was proclaimed of the Mahabharata: "What is not in it. is nowhere." After twenty-five centuries,

wp. can use the same words about it. He who knows it not, knows not the heights and depths of the soul; he misses the trials and tragedy and the beauty and grandeur of life.

The Mahabharata is not a mere epic; it is a romance, telling the tale of heroic men and women and of some who were divine; it is a whole literature in itself, containing a code of life, a philosophy of social and ethical relations, and speculative thought on human problems that is hard to rival; but, above all, it has for its core the Gita, which is, as the world is beginning to find out, the noblest of scriptures and the grandest of sagas in which the climax is reached in the wondrous Apocalypse in the Eleventh Canto.

Through such books alone the harmonies under- lying true culture, 1 am convinced, will one day re- concile the disorders of modern life.

I feel the very name "Saints of Maharashtra" epitomizes in one short sentence the grandeur - depth - infinite bliss and perfection of such souls as rarely bless Our planet, even singly, but who literally flooded Maharashtra together and at the same time.

What is unique is that all of them without excep- tion fulfilled all the requirements of sainthood: Ab- solute faith and dependence on God and complete absence of egotism, greed and lust so that their very lives were throughout examples of humility, universal love and devotion.

Unlike so many so-called and self-appointed "God-men" of today, they harboured neither pride nor possessions. They were humble to the point of be- littling themselves and which is indeed all the more astonishing considering their backgrounds, each and every one of them, artisan, worker, out-caste - cour- tesan, maidservant or learned Brahmin, fully realized the Oneness of Vedanta, the highest philosophy pro- pounded by sages of the Upanishads and later by Shankaracharya. In their simple ways they trans- cended dualism itself and soared into the domain of formless, infinite bliss. In recent. times I can only recall Sri Ramakrishna and his close disciples to have achieved tne same realization in their lives. Yet in the Maharashtra of the 13th century there existed over a score of such intensely self-realized souls who actual- ly practised the philosophy of Vedanta in their fields construction grounds, kitchens, workshops or wher- ever they were as it came to them most naturally.

The courtesan and the maidservants like the tailor, potter or gardener and the goldsmith knew the world to be the reflection of the other forms of God - God indeed appeared to the gardener as the water, the flowers, the well, bucket and ropes. It was His play, His Lila!

Having the realization of oneness abiding with them forever, they also had - and mark the marvel- lous combination - a deep and childlike dependence on the form aspect of God as represented by the im- age of Vithala Panduranga.

The one pity is that so little is known about so many. Namadeva in his abhangas describes the lives of his contemporaries. His poetic biographies as well as hIS own autobiography are all that we have of the main group of saints. A later day Namadeva called Vishnudasama continued with biographies of later saints especially northern ones.

Of many, we only have a few abhangas which they left without a hint about their own lives. The whole family of Jnaneshwara is remem- bered among the foremost of the saints. Each left abhangas transcending the conception of relativeness in such a subtle and poetical manner as to have the listener spellbound.

Namadeva's and Chokhamela's entire families were fervent devotees whose beautiful abhangas are still recited in Maharashtra. Unfortunately no mate- rial is available concerning the saint of Karnataka, Pundalika who came to Pandharpur and installed the images of Vithala and Rakhumai there.

There are few references to him in the saints’ abhangas and from hearsay we know that he was a very devoted son who kept Krishna waiting outside, standing on a brick ("Vitha") while he completed ministering to his parents. Vithala rewarded his filial devotion by agreeing to abide in a temple built for Him at that very spot.

We know nothing about Damaji who opened the king's treasury to the poor or Kurma Das Jnaneshwar and Namadeva went to meet.

These simple souls who grasped with ease what sages discuss or strive to understand must have elec - trified the whole state with their fervour To imagine what those holy Kirtanas initianed by Jnaneshwar and Namadeva r must have sounded like with a score of realized souls singing God's names at the top of their voices. must indeed cause one's to stand on end.

Kirtanas very soon crossed the boundaries of Maharashtra and flooded the whole country where the memory of Saint Jnaneshwar and saint Nama deva will be lovingly remembered for having created so simple and sweet a mode of self purification and worship: The Namasamkirtana!

May all our blessed readers follow in their foo steps and attain bliss. 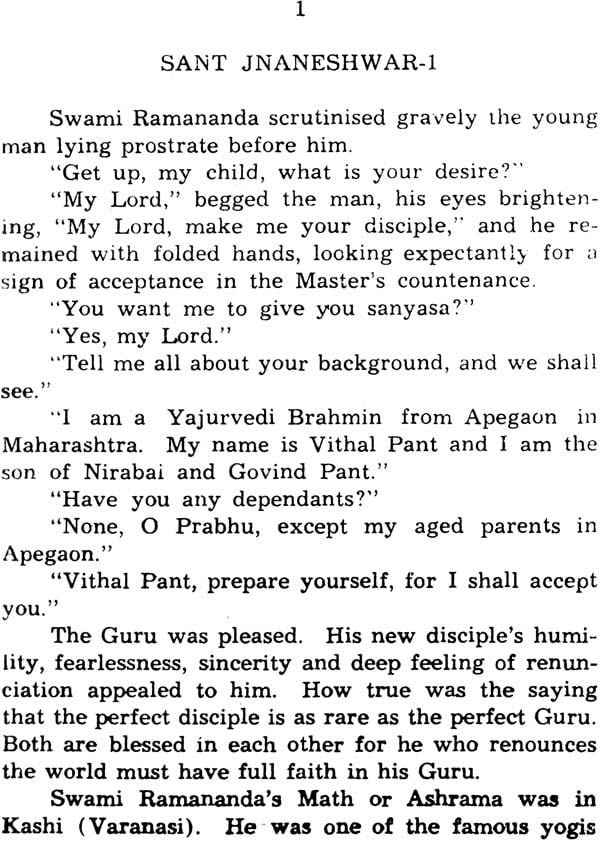 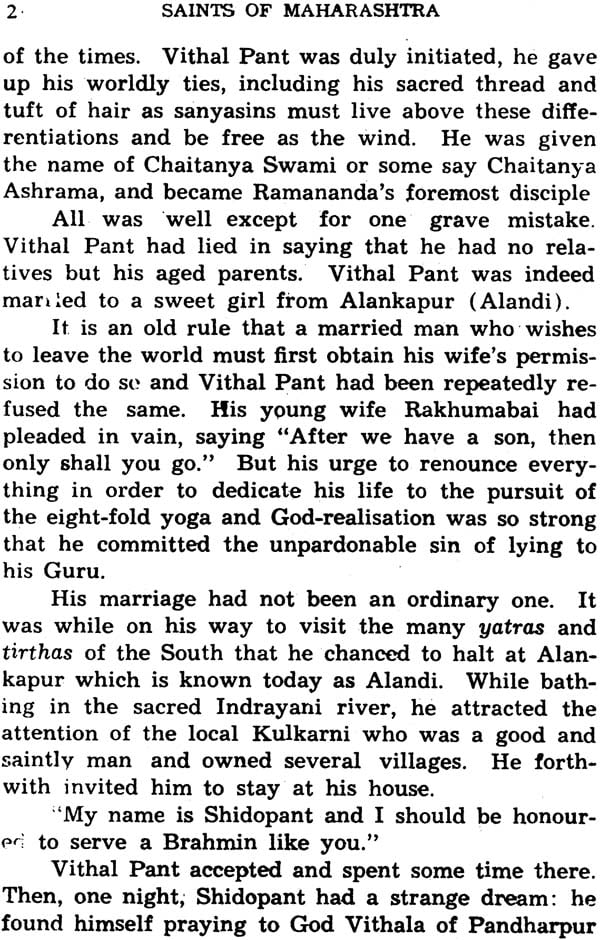 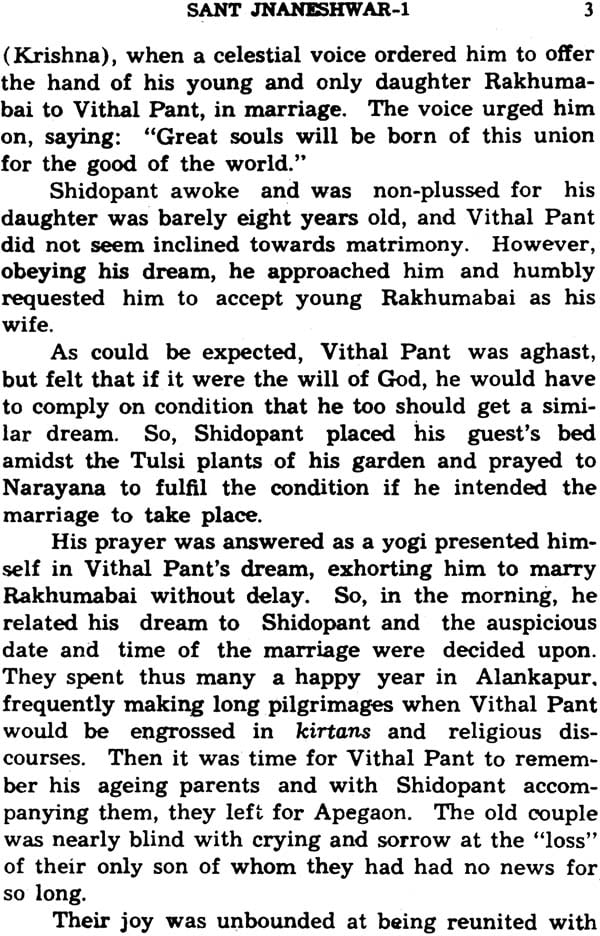 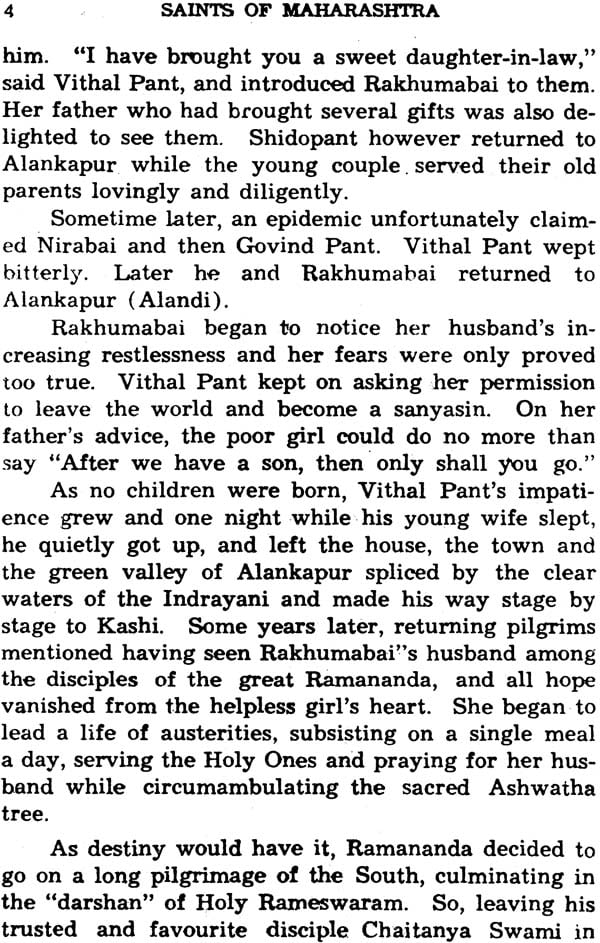 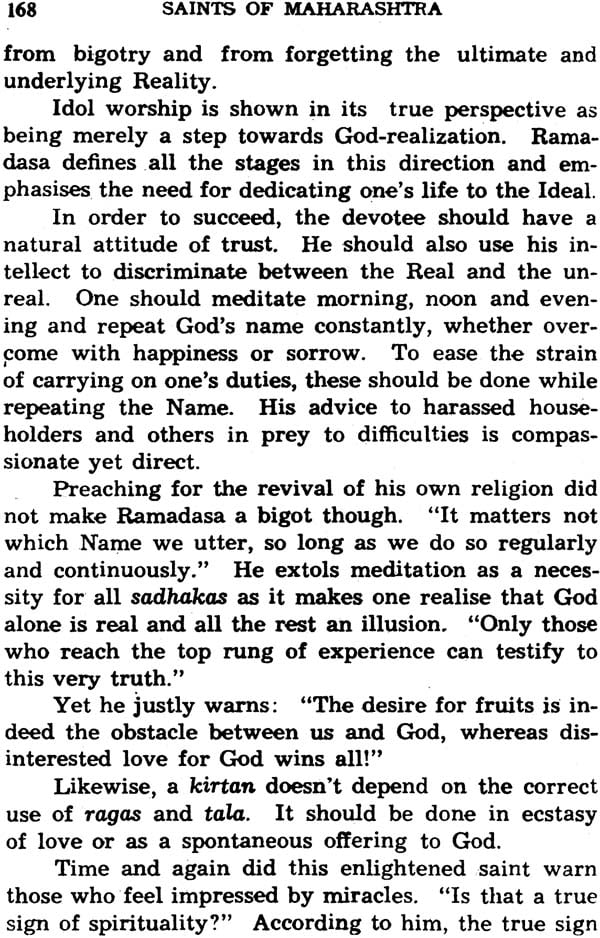 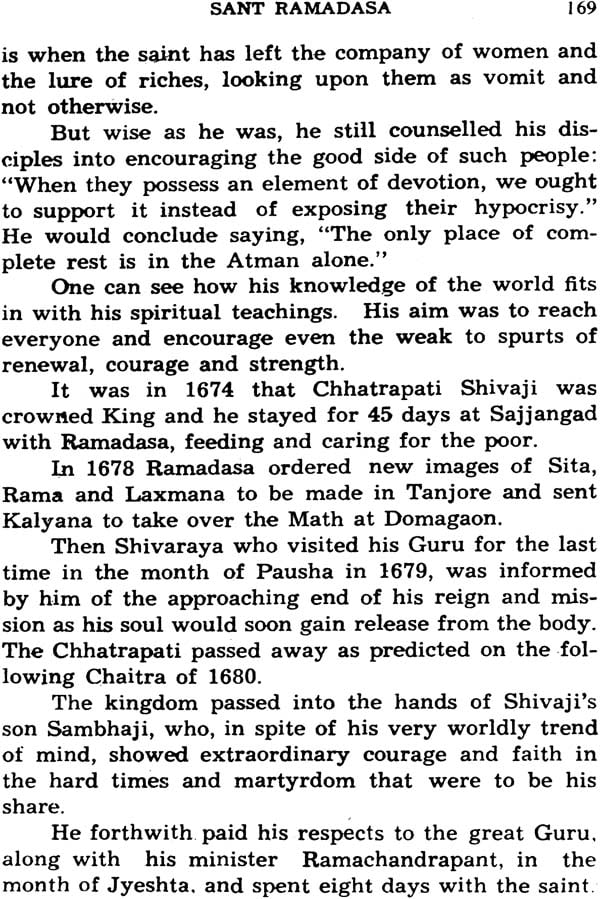 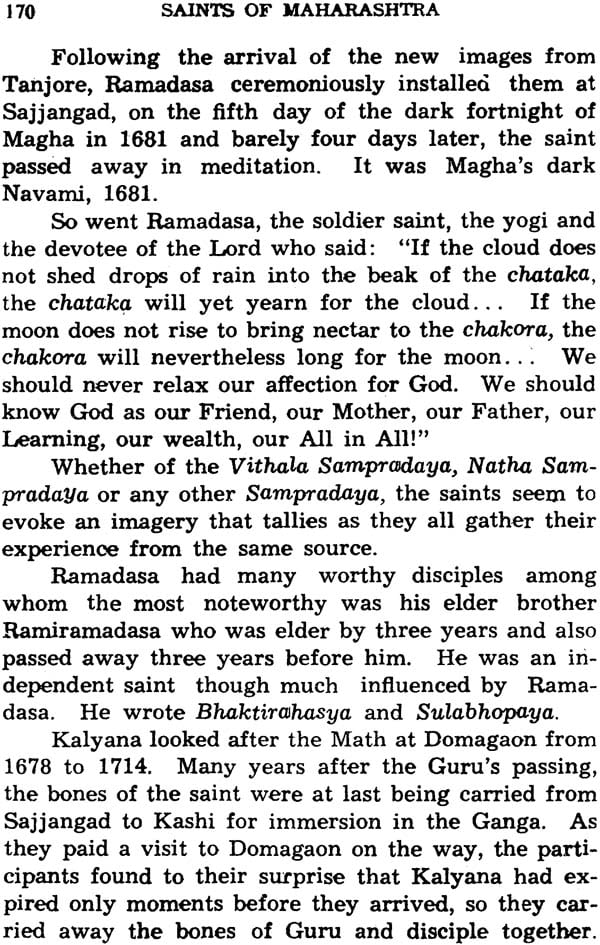 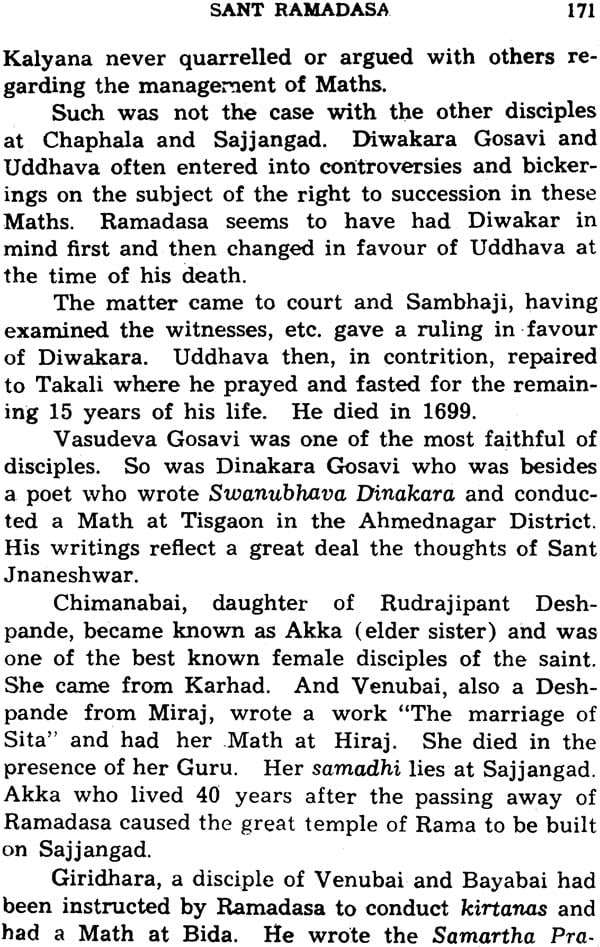 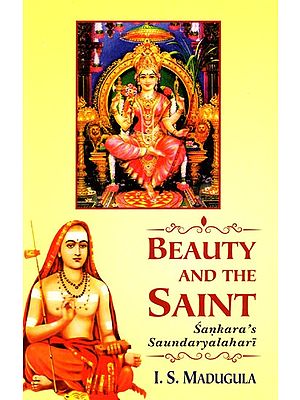 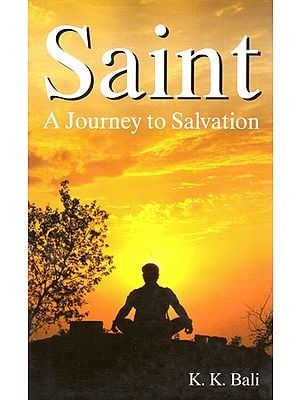 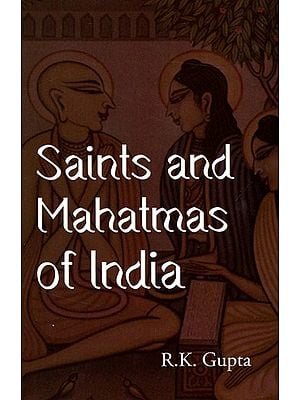 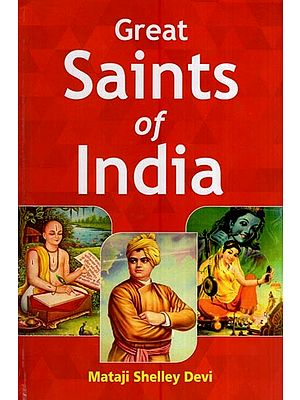 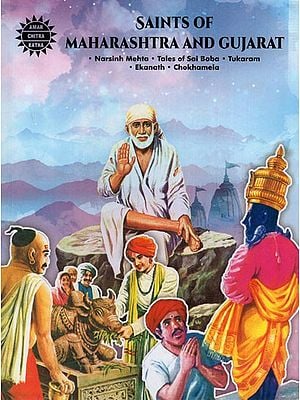 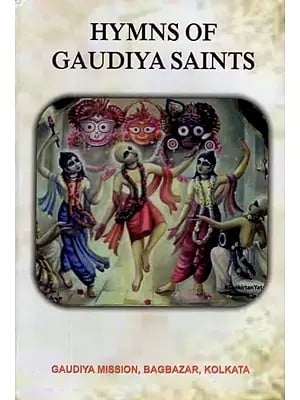 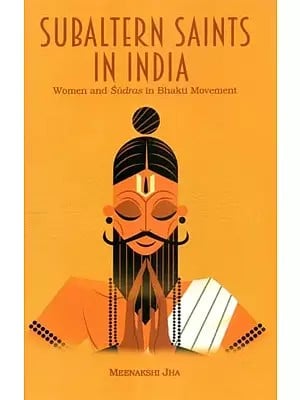 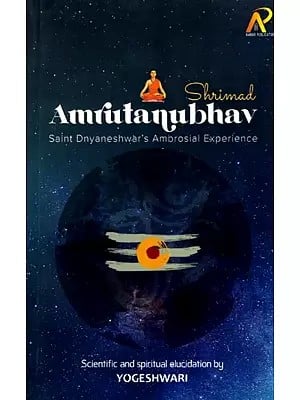 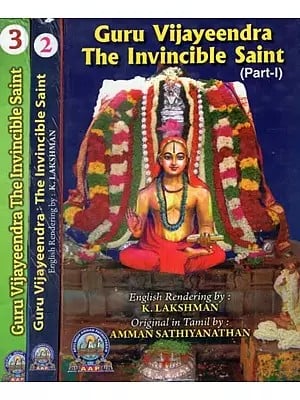 Guru Vijayeendra- The Invincible Saint (Set of 3 Volumes) (An old and Rare Book)
By K. Lakshman
$53
FREE Delivery
Book FAQs
Add a review
Have A Question