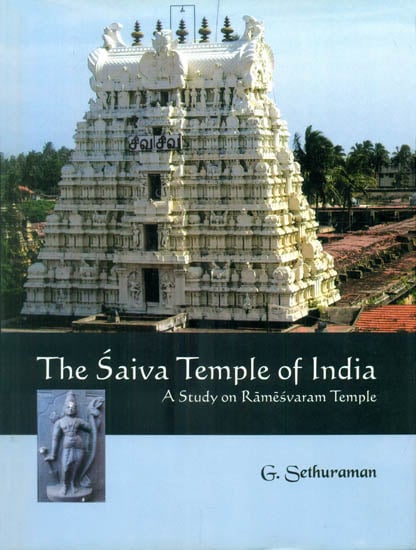 Ramesvaram has two facets, a tirtha centre meant to the dead and sthala centre, sacre, sacred to Lord Siva, It has development into one of the most interesting centres of Hinduism, or a microcosm with all the complexities of the wider cosmos called Hinduism.

Since Rama worshiped Siva here to expiate himself from the sin of killing Ravana, Ramesvaram also became the sacred place of sraddha ceremony to the departed souls. An island in the extreme south emerged as the pitr-oriented pilgrimage centre-the direction of south being connected with Yama, and the ferry for crossing Dhanuskoti suggesting the Vaitarani river.

The Ramesvaram temple complex has three prakaras accommodating majestic, big and small shrines and mandapas meant for the performance of specific rituals. The book presence a comprehensive study of this temple complex. It traces the legends, history and rituals of the temple exploring the Vedic and Pauranic legends, epic stories and Tamil literature and also the bulk of epigraphic and classical texts. It also analyses the nuances of architecture and sculptural embellishments and discusses the layout and sequence of construction of all the shrines, mandapas and gopuras. The architectural and sculptural details of each and every part of these structures are compared with the existing contemporary Chola temples in the Chola main land. Detailed account of the rites and ceremonies performed in the temple daily, and annually is given. The temple administration and a prolonged conflict for right to administer are also discussed in detail.

The book presence Ramesvaram as one of the foremost centres of Saivism in particular and Hinduism in general reflecting Dravidian architectural features.

Dr G. Sethuraman is a retired Senior Professor and Head of the Department of Art History, Madurai Kamaraj University, Tamil Nadu. He has sixty-nine papers both in international and national journals in his credit. He has been invited by the Ministry of Hindu Cultural Affairs, Colombu, Sri Lanka, for the past six years continuously to present papers, chair the seminar sessions and deliver special address. He has awarded by the State Government of Tamil Nadu for his book History of Buddhist Art (in Tamil) in April 2013. Some of his other books include, Facets of Indian Art and Culture (1995); Museology, Museum and its Techniques (1996); Social, Cultural and Art History of Tamil Nadu (1997); Virudhunagar District-An Archaeological Source Book (as co-author, 2000): History of Performing Arts in Tamil Nadu (2004). He was the Editor of the Proceedings of the South Indian History Congress Congress for four consecutive years. Some of the notable responsibilities he held in the university are: Deputy Director Education, N.S.S

The present work entitled The Saiva Temple of Indian: A Study on Ramesvaram Temple is an improved version of my work which I submitted to Madurai Kamaraj University, Madurai in 1985. This book attempts to trace the importance of Ramesvaram as one of the most renowned sacred spots in the subcontinent, and antiquity of the temple, to explor the architectural and sculptural tradition of this temple from the very early period to the present century, to explain the rites and ceremonies in this temple and to review the nature of its administration.

The first and introductory chapter brings out the geographical position of the place and the general livelihood of its people. Further, it charters the variety of source material available for this study.

The second chapter ventures to find out the importance of Ramesvaram in the Hindu Cosmos. It has been shown how this place has become a centre for the performance of rituals for the dead soul.

The third chapter deals with the rise and growth of the temple through the ages, patronage of rulers, and political vicissitudes which affected the peaceful functioning of the temple rituals.

The layout of the temple and the sequence of construction of each edifice of the temple complex, and the measurements of the structures have been portrayed in the fourth chapter to make the reader understand the exact location of shrines, mandapas and tirthas. In the first and sixth chapters architectural and sculptural embellishments have analysed, in comparison with contemporary temple styles. A scientific study has been attempted to date some of the early structures on the basis of the architectural features in the absence of epigraphical sources.

In the seventh chapter a detailed study has been made on the basis of James Burgess’s account of the rituals, to record the daily rituals of the temple priest and celebration of festivals throughout the years. It is during the festivals that people mingle with each other to create a social and cultural harmony. Ramesvaram plays vital role in creating national integration both politically and culturally. The eighth chapter focuses on the significance of the tirthas of this sacred spot.

The ninth chapter discusses the administrative affairs of the temple from the late medieval period. As the sources for the early period has not been discovered so far, the author regrets for the failure in the attempt. Mixing of administrative history with art history has become unavoidable, for this book is a monograph on a single temple complex. There were conflicts between the pandarams of the temple and the Setupati rulers on the management of the temple affairs. It is quite interesting to note how both the parties have indulged in proving right over the temple management by providing legal as well as illegal or documents to the Privy Council.

The concluding chapter summarises the findings of the study explaining the sacredness of the place, negligence of the early shrines in the temple complex, their significant features, degradation of both architectural and sculptural traits of the early period into a stylized, stucco rendered and ugly ones. The Ramesvaram temple complex having nine notable is a class by itself featuring art and architecture of variegated styles. 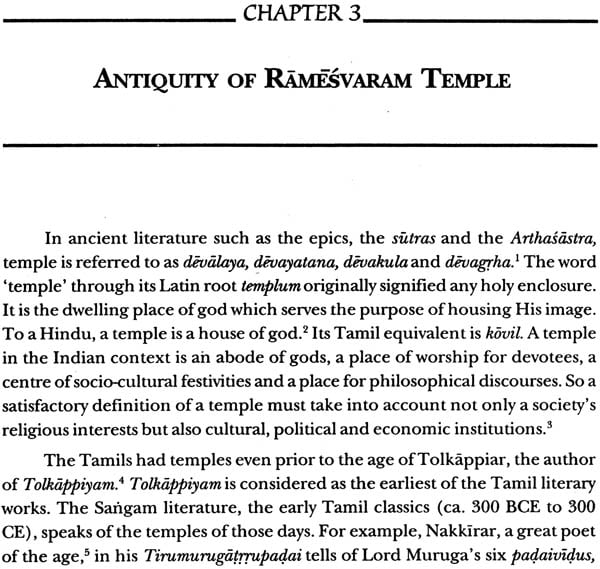 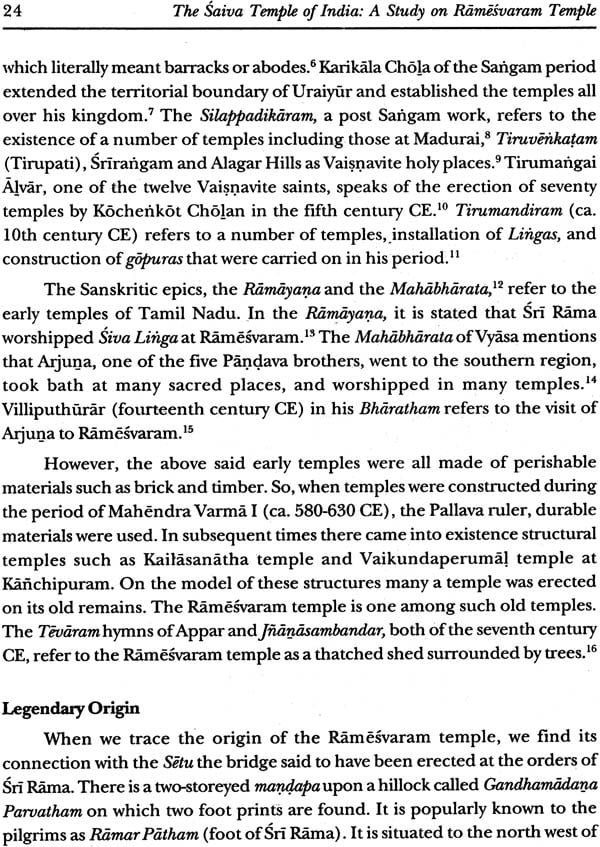 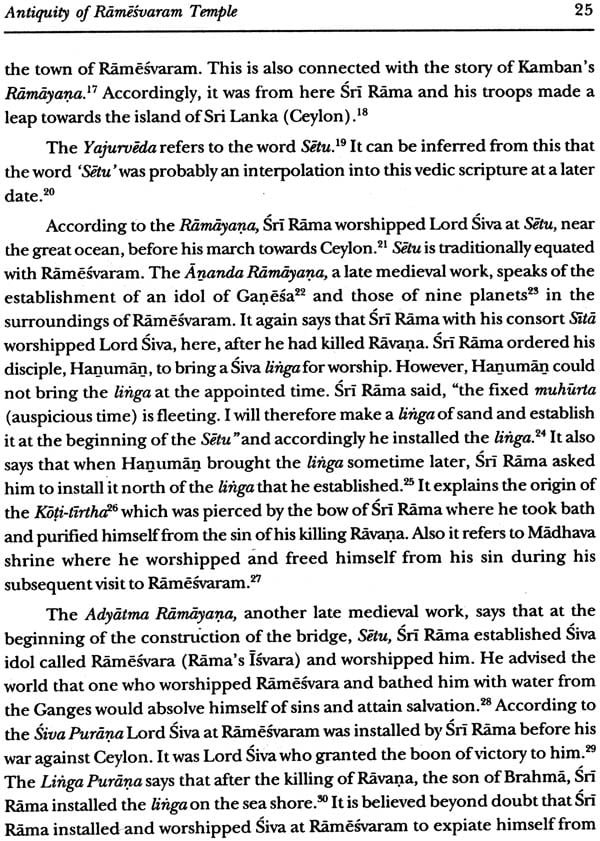 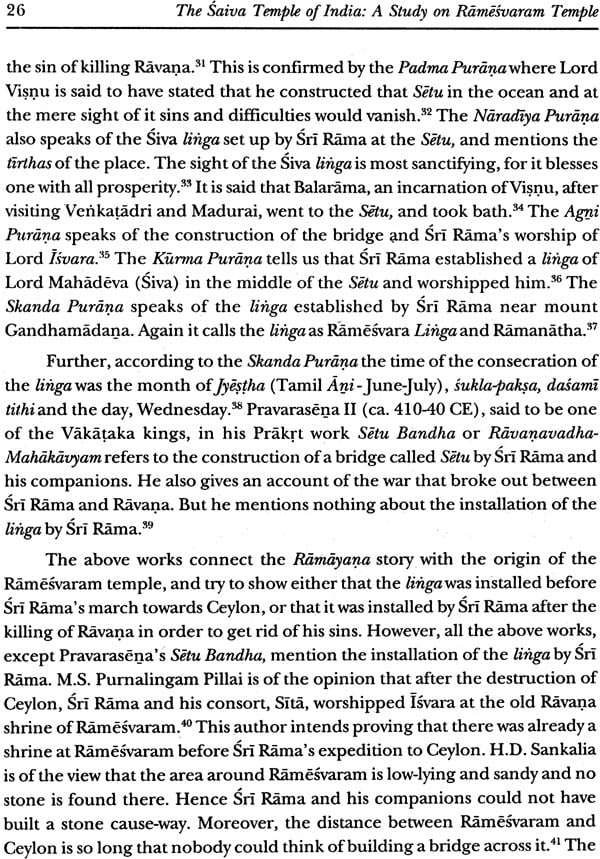 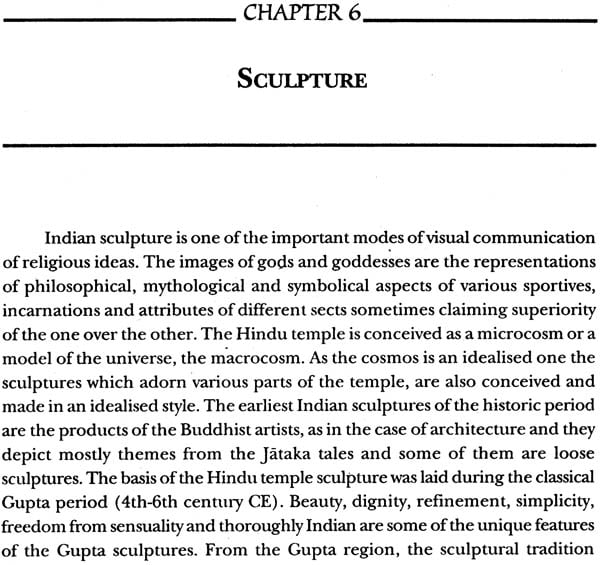 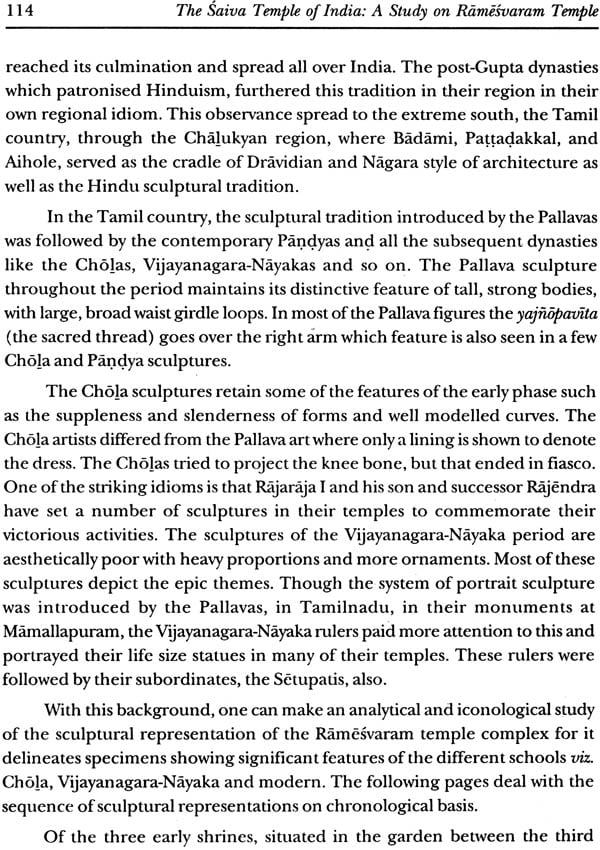 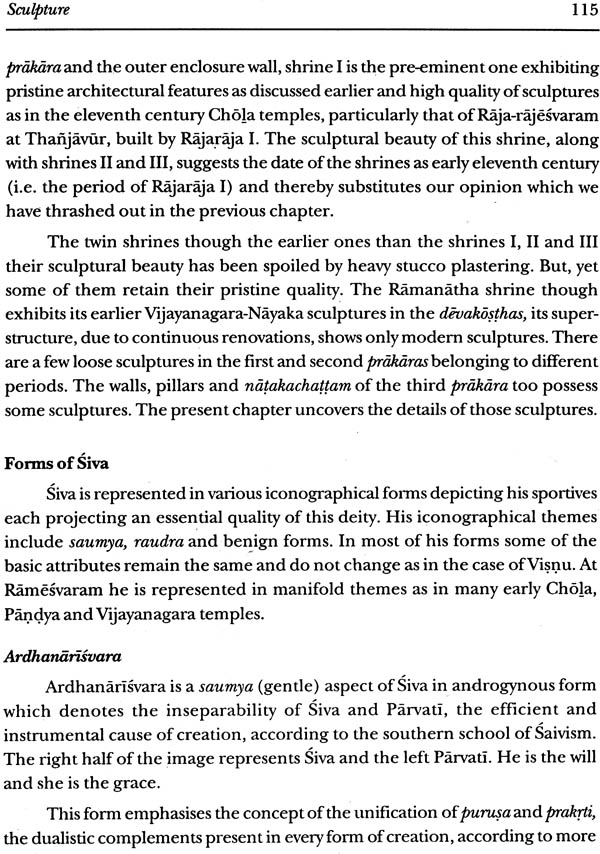 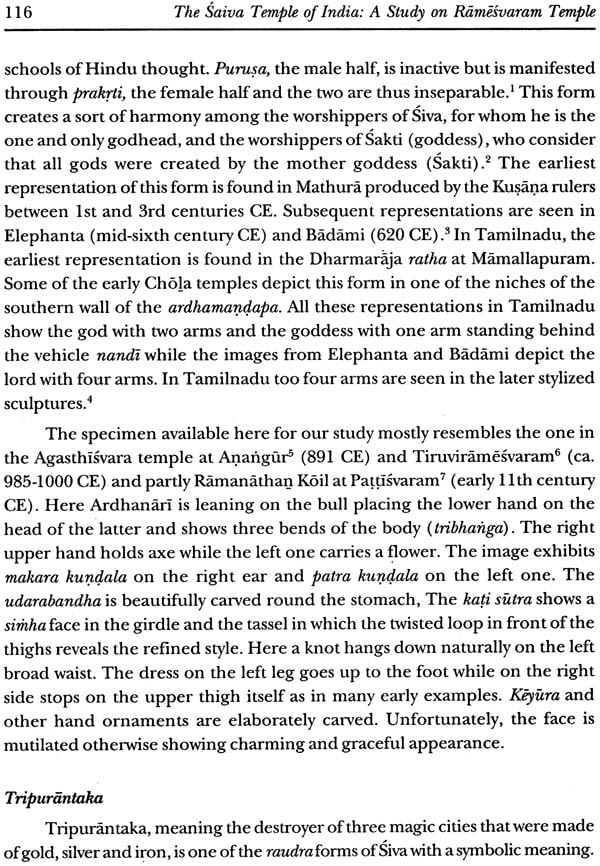 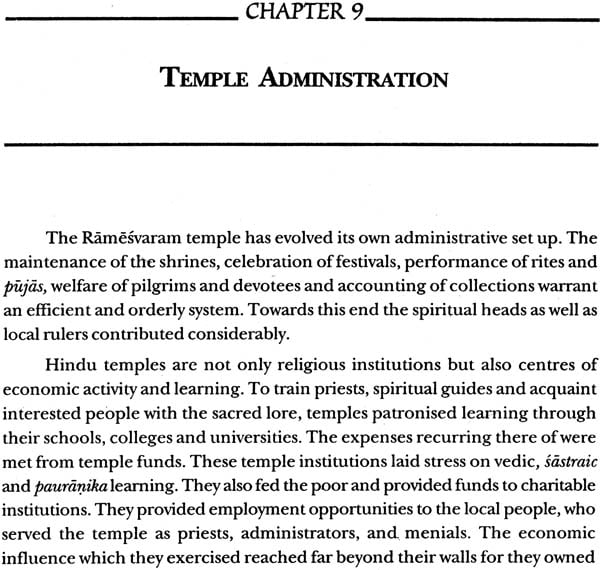 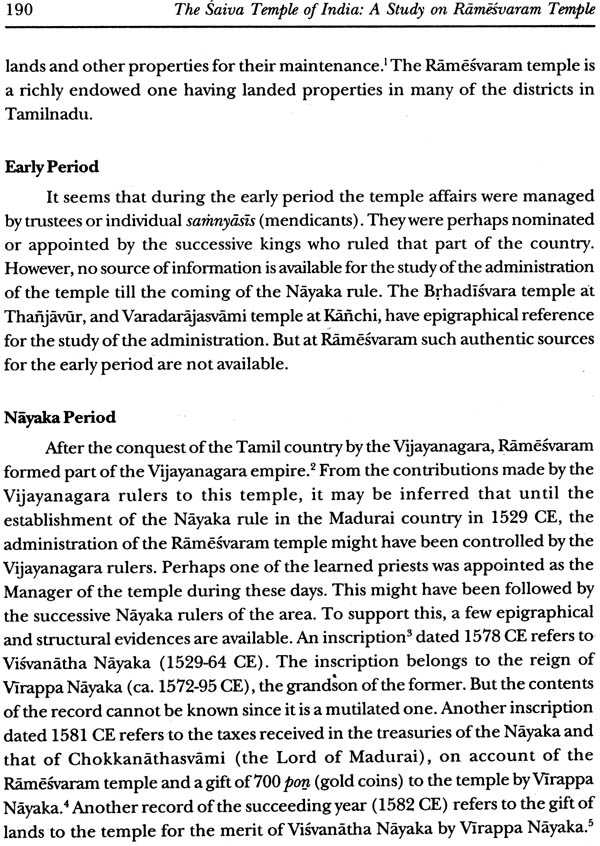 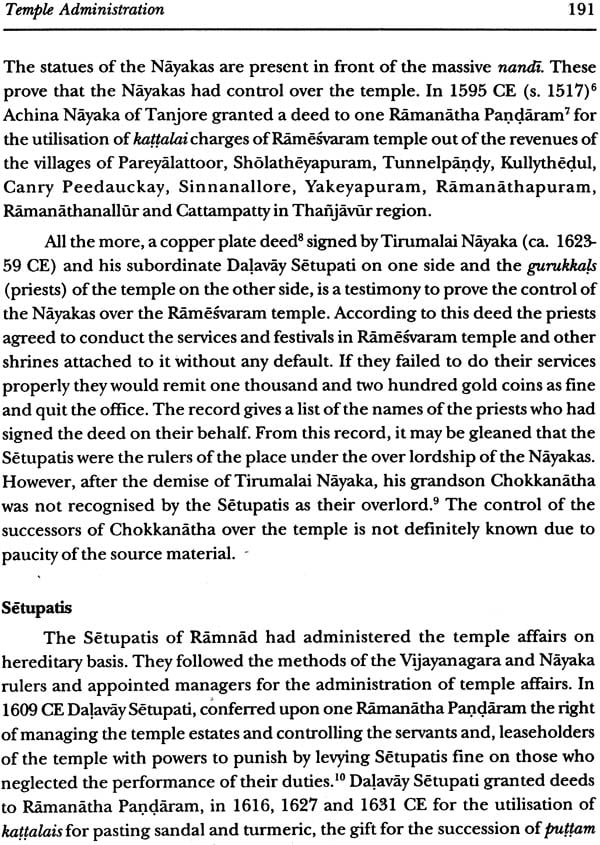 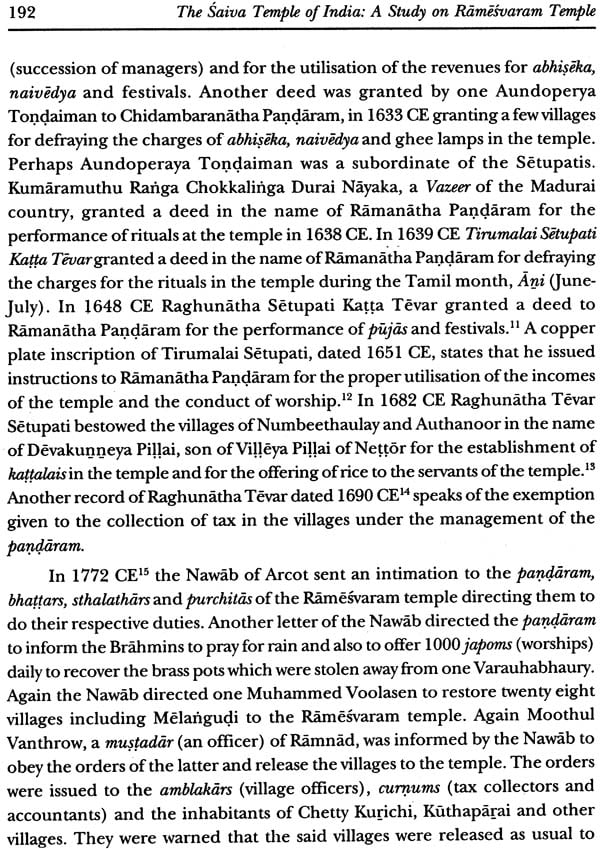 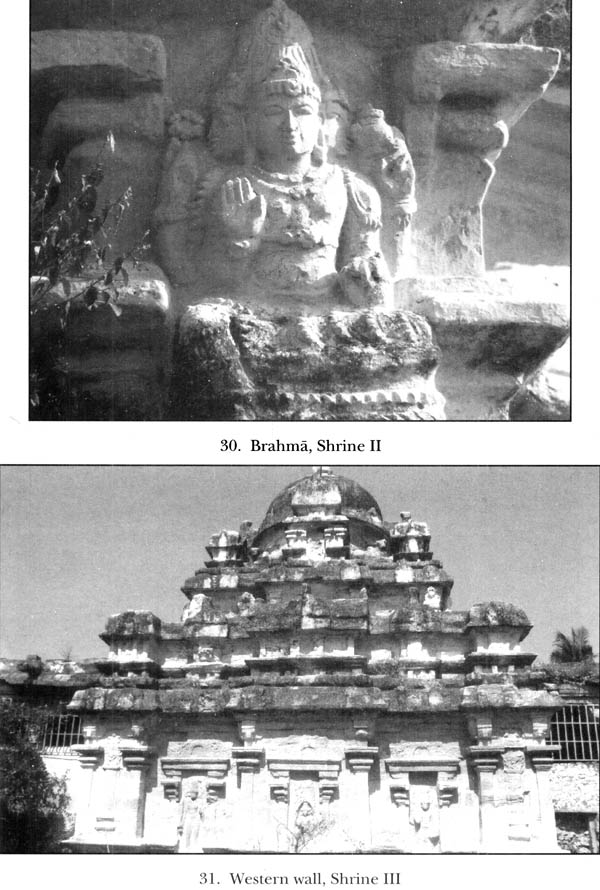 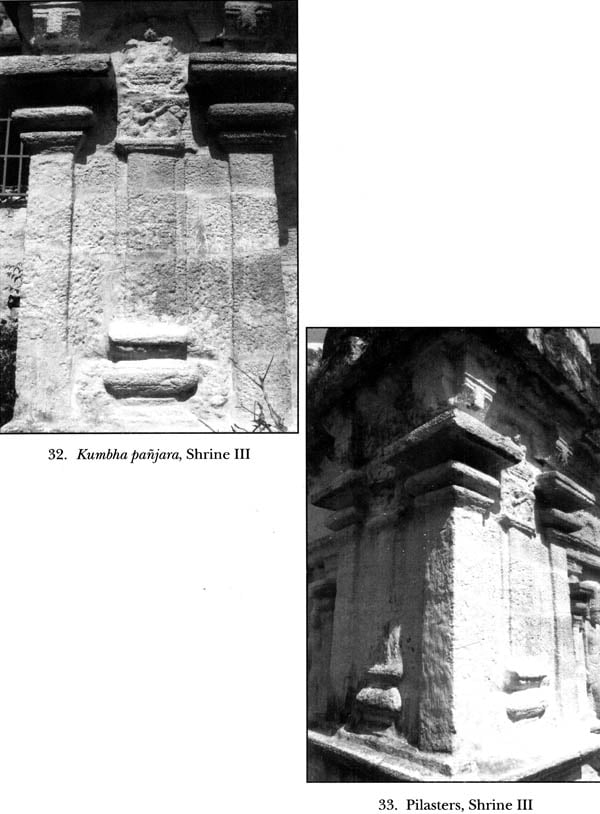 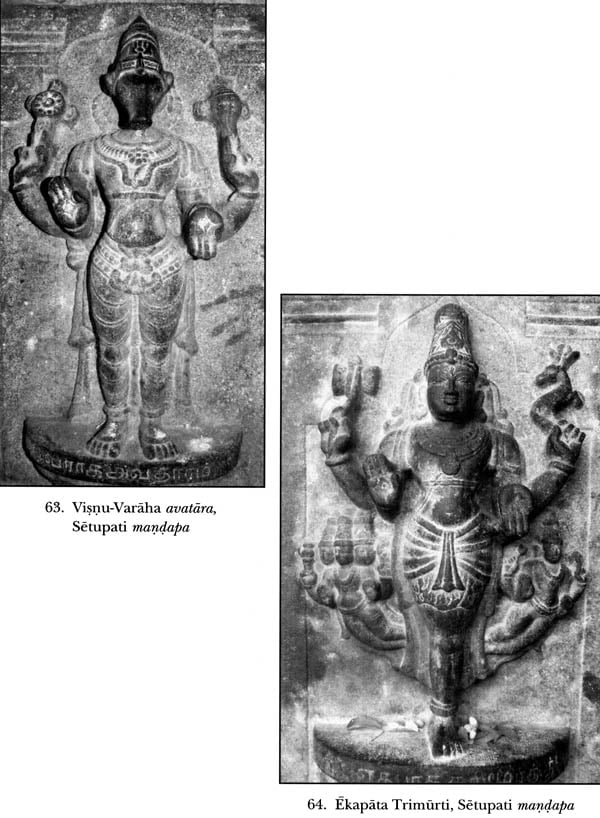 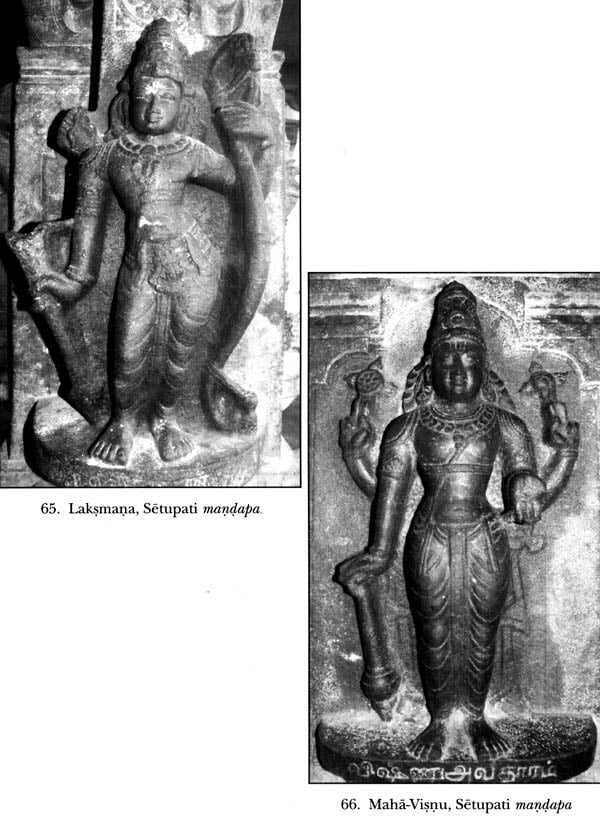 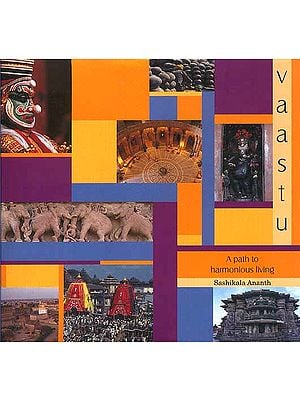