The importance of Sakuntala as personifying Indian womanhood in Indian literature and culture is undisputed. This books attempts to explore some of the links between culture, history and gender, and between literature and history, through reading variant versions of the narrative of sakuntala. These include the stories in the Mahabharata, the play by Kalidasa, and the 18th century kathii in Braj. The transformation of Sakuntala from an autonomous assertive figure in the Mahabharata, to the quintessential submissive woman in the Kalidasa version, is carefully examined by the author through a fascinating reading of the texts and translations of the play in India and Europe.

ROMILA THAPAR has specialised in early Indian history and has written extensively on the man `'1 aspects of the past. Her books include Asoka and the Decline of the Mauryas; Froi Lineage to State; History and Beyond; Cultured ' Pasts: Essays in Early Indian History; Earl India; Somanatha: the Many Voices of a History; The Aryan: Recasting Constructs; The Past as Present: Forging Contemporary Identities through History; The Public Intellectual in India; The Historian and Her Craft:, Collected Essays and Lectures; among others.

She has been a visiting professor a universities in Asia, Europe, and the US and is currently Professor Emerita at Jawaharlal Nehru University (JNU), New Delhi. In 2008, she was awarded the Kluge Prize (the American Nobel) for Lifetime Achievement in the field of History.

THE genesis of this lengthy essay lies in a lecture I was asked to give during the tenth anniversary celebrations of the publishing house, Kali for Women, in 1995. Given the occasion, a theme with a gender orientation was thought to be appropriate. I had earlier toyed with a comparison of the two Sakuntalas-that of the epic and that of the Kalidasa play, but not in any detail. I decided to revive this theme and although the limited comparison of the two texts had been made often enough, I was interested in probing a little further into the texts, as well as bringing into the discussion the commentaries on the theme when the play began to be translated into a wide range of languages in the eighteenth and nineteenth centuries. The attempt here is to see how the theme was treated in different historical periods and why there was this difference.

This became a veritable treasure hunt with pointers which have taken me far from the epic and the play, but which I nevertheless think are relevant. Given the nature of the forms in which these variations were presented, the interface of culture and history inevitably crept in. And so like Alice, it grew and grew and given half a chance it would grow still more. But I have decided to pause at this point. The intention of the essay is not to present a definitive study of the narrative and its treatment, but rather to suggest that when a theme changes in accordance with its location at a historical moment, the change can illumine that moment, and the moment in turn may account for the change. It is not an attempt to include all references to the narrative, only those which I think reflect varying nuances of the interplay between culture and history, underlining the changes in the historical context and the effect of the latter on the former. The essay is largely only in the nature of a comment, first on the variant versions and then on the readings of the Kalidasa play. Hence the interventions of the translated texts and the statements of those who gave the story a direction. This is therefore an 'essay' in the literal sense and has been an enjoyable, at times even a light-hearted, diversion from some of the other history that I have been writing.

The links between culture, history and gender are briefly touched upon in the first section. In the second section the version of the story as given in the MahAbharata is discussed, largely in the context of how the epic tradition treated the narrative. The third section introduces the striking change in the narrative and the meanings of the embellishments, now treated as a work of literature in the tradition of courtly culture through the Kalidasa play, Abhijfidna-Sakuntalam. The fourth section refers to the continuation of the tradition of the narrative in various more popular forms, although still within the framework of Sanskrit writing, and contrasts it with some glimpses at a different level of how it was viewed by literary theorists around A.D. 1000. The span from the popular to the courtly culture is itself of some interest. The fifth section changes tack, as it were, and moves to a discussion of-adaptations and translations of the Kalidasa play, initially in Braj-bhasa and then in Urdu. These are very different in spirit from the translations in English and other European languages, where the reception of the play in nineteenth century Europe and India made it a part both of European literary movements and British perceptions of Indian culture; these are discussed in the sixth and seventh section. Tagore's essay on the play becomes the focus of the eighth section, which also considers the modern Indian context within which the play was viewed. 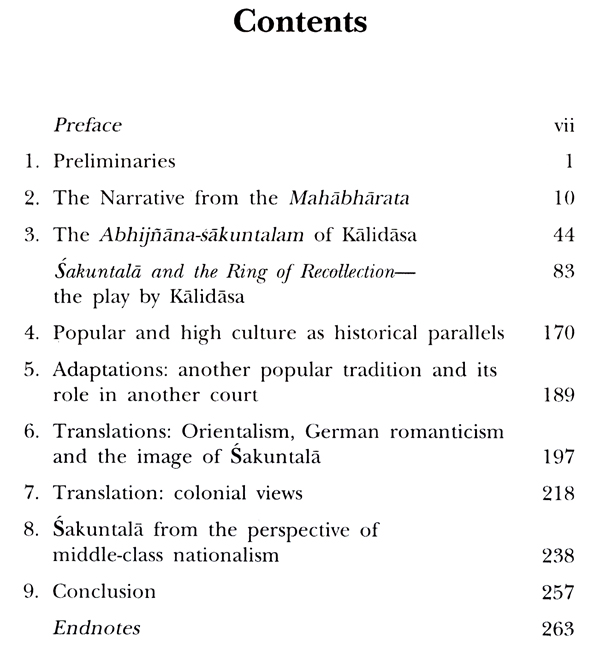 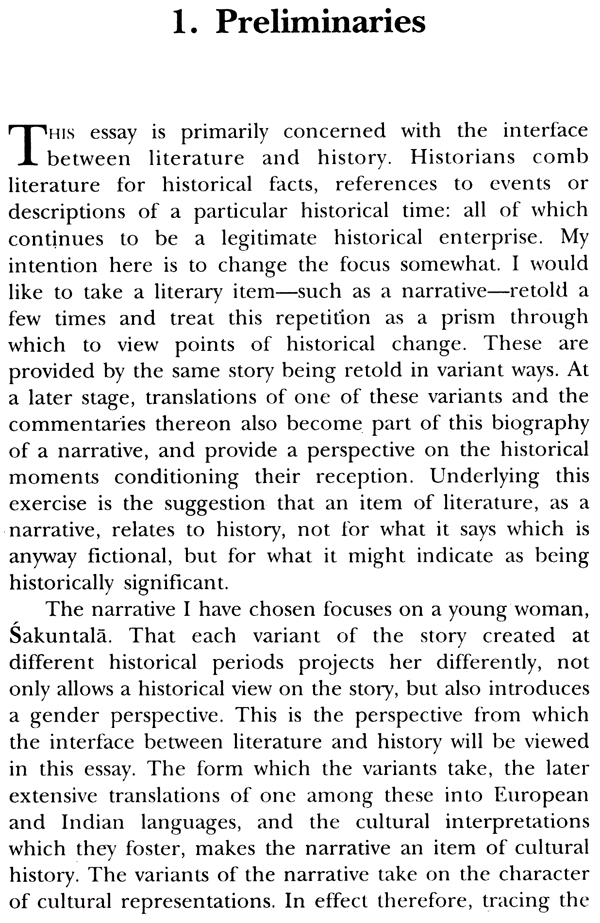 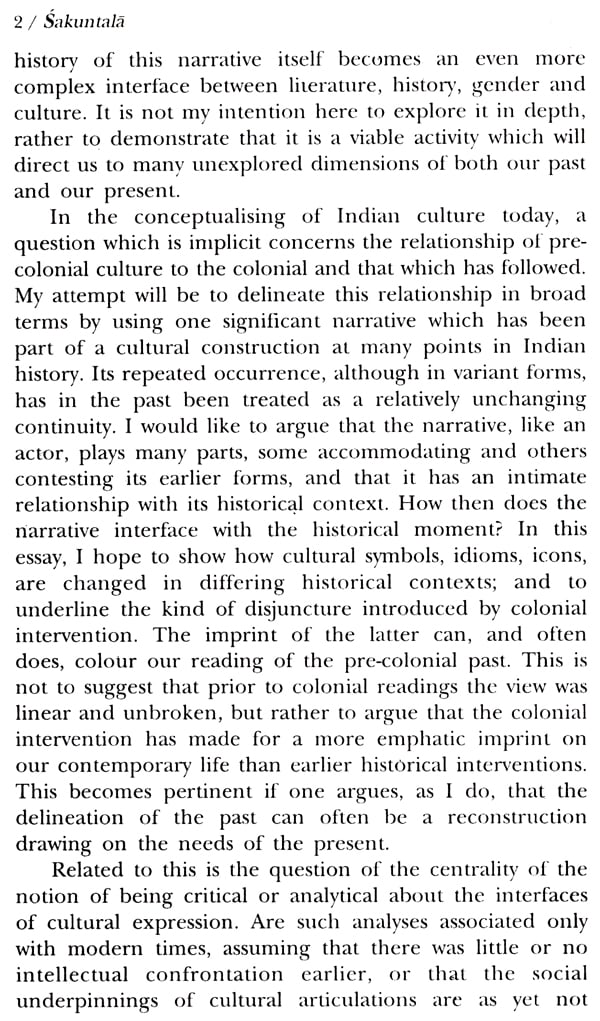 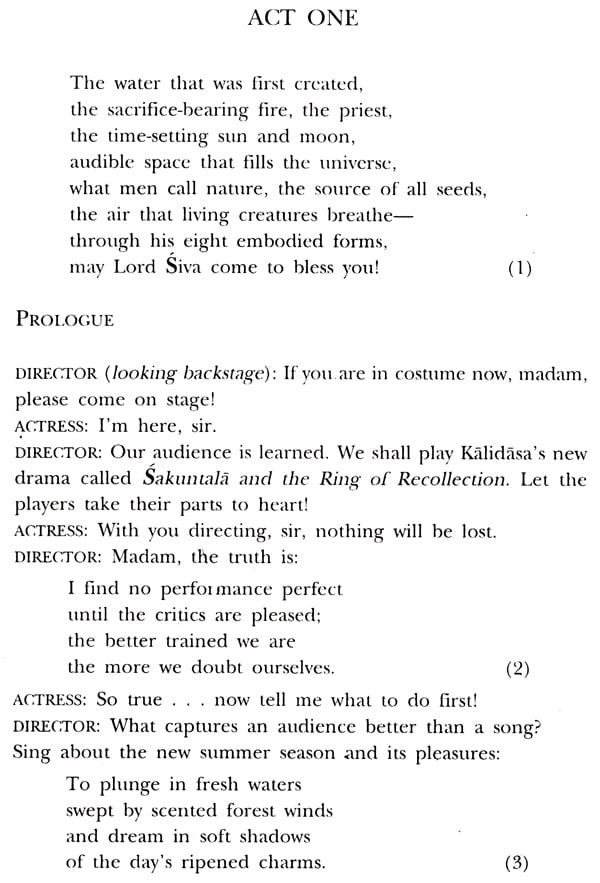 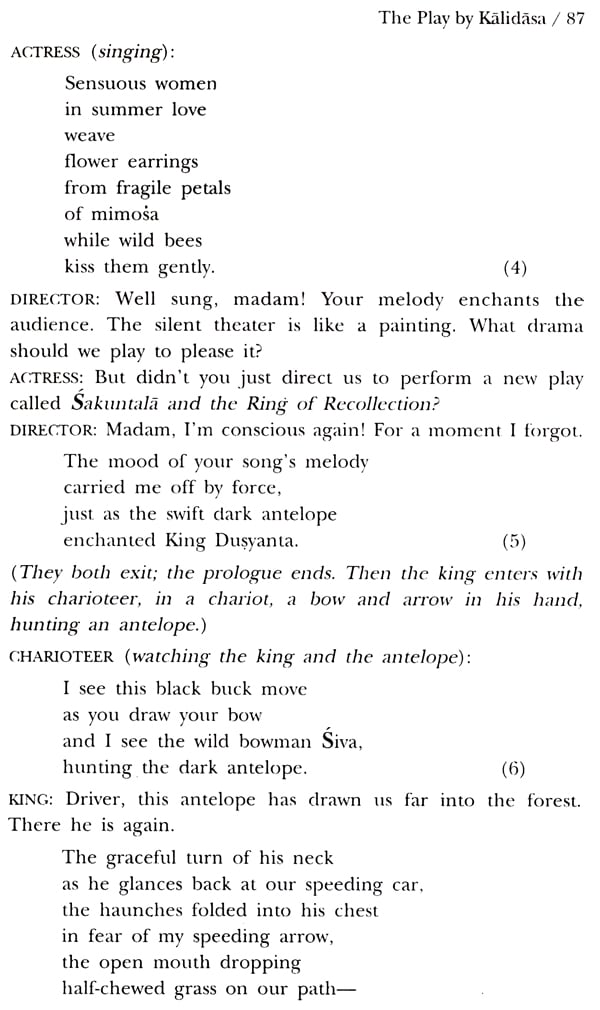 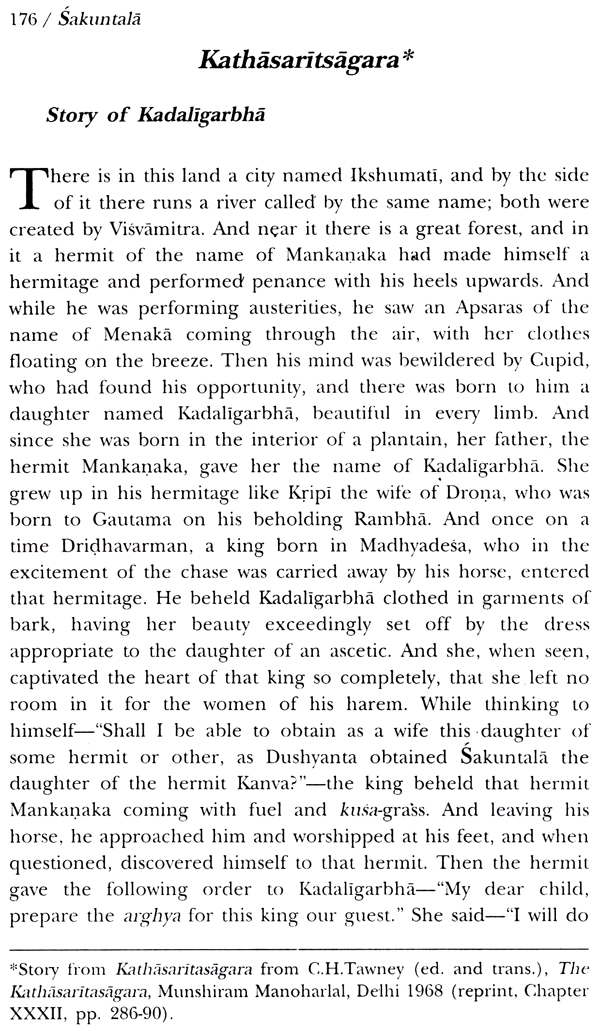 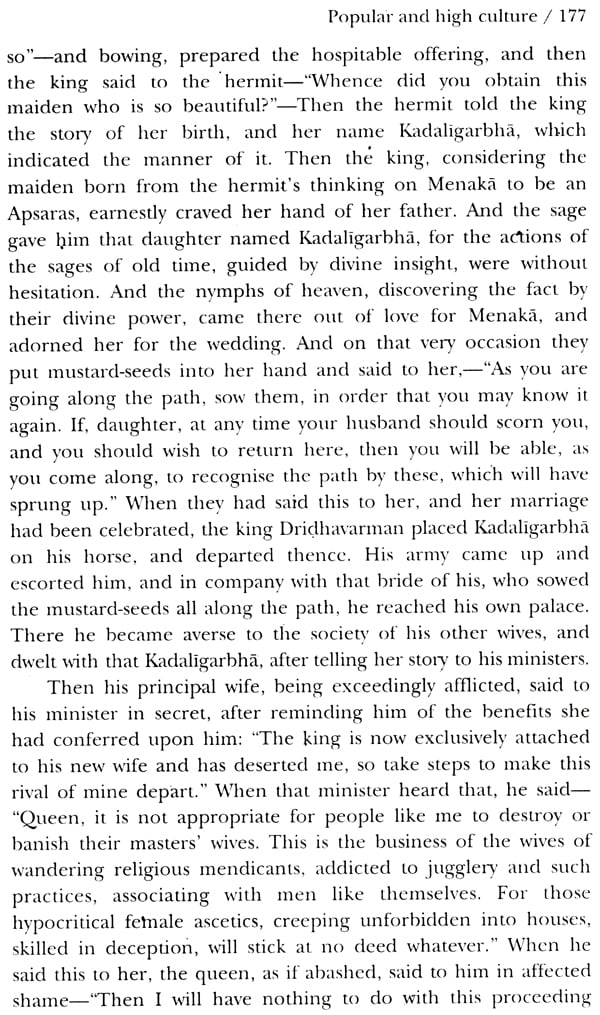 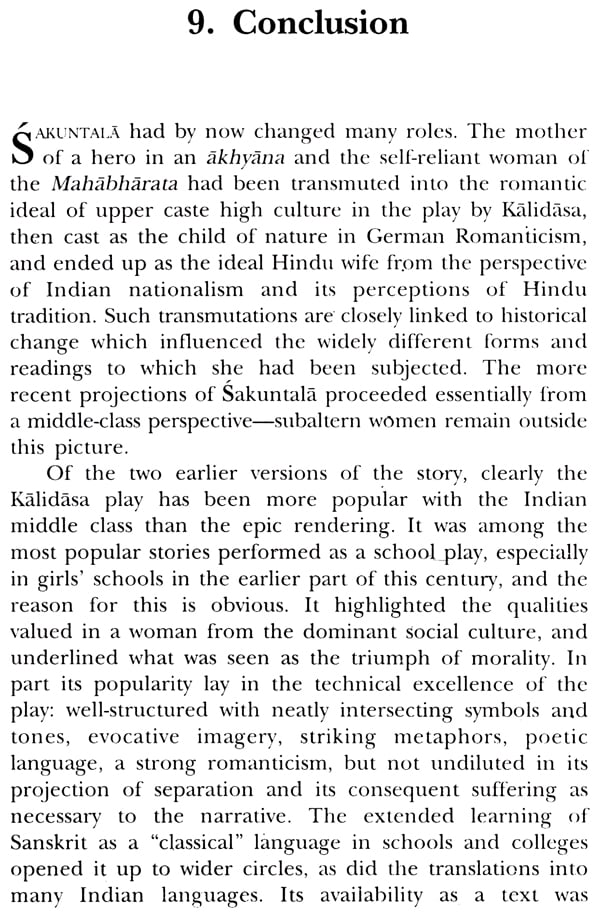 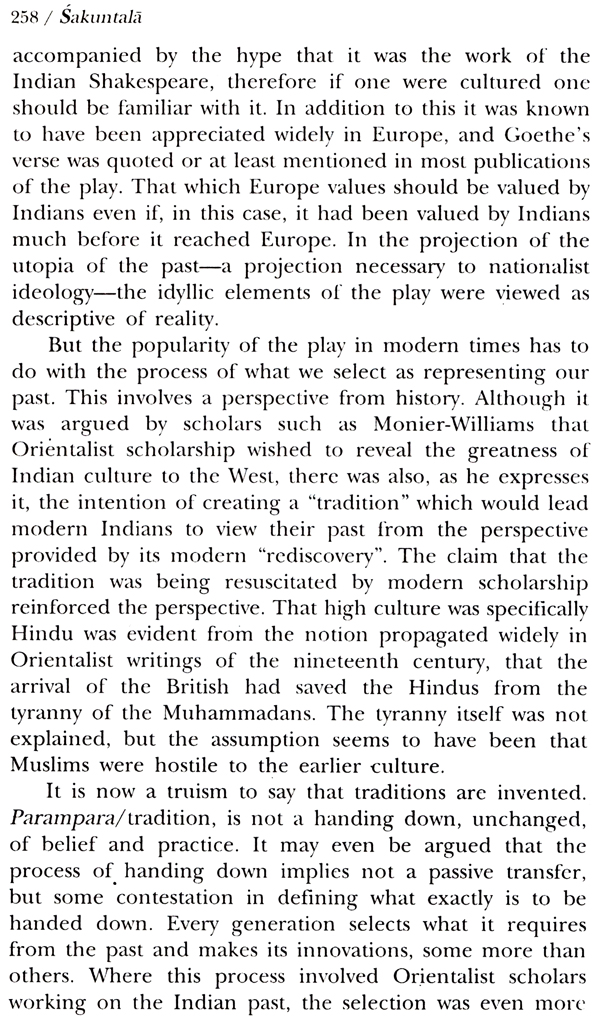 Shakuntala (The Romance Tragedy and Triumph of the Heroine of the Greatest Indian Classic)
By IGEN B.
$12.50 Shakuntala and Other Stories from Ancient India
By Adithi Rao
$16 Transliteration, Ecology and other Essays on Indology
By Satyanarayan Chakraborty
$19.60
FREE Delivery
$24.50  (20% off)