The Book sher-E-Bangla Fazlul Huq In the Cross-currents of Provincial and National politics of India has tried to focus on Huq’s shifting political activities as he often drifted from provincial to national politics and vice versa as well as on his vacillating political stance as he wavered between the muslim league, the Congress and his own make krishak praja party, this is an effort to determine dispassionately whether political opportunism or non- coherent attitude towards any basic philosophy played any role for his unpredictable attitude. Even though Huq seemed to have been a man shaped By events, the reasons behind it require proper analysis and probing. Further it Needs to be seen whether huq’s chronic indebtedness placed him at the mercy of the highest bidders who, being men of dubious characters, utilized him for their personal gains showing scant respect for his political ideology. Hence the book has been authored to the best of abilities to present an insight into understanding huq’s way ward character inspired of his unbound love for Bengal and the bengalees.

Samindra Mohan Biswas, studied at south Point school and Presidenty College in Kolkata and passed the M.A. Examination in Modern History from the University of Calcutta in 1992 and was awarded the Ph.d Degree in Arts on 20th august 2007 by the University of Calcutta. He did extensive research work on the life and achievements of one of the most controversial characters, the first Prime Minister of Undivided Bengal, abdul Kasem Fazul Huq. He is presently working as an Associate professor of History in Bidhan Chandra College, rishra, Hooghly ( West Bengal) and as a quest Lecturer in the Department of Islamic History and Culture at the University of Calcutta.

There is hardly any doubt that Fazlul Huq was one of the most charismatic, though enigmatic, political leaders of the early twentieth century. As such there is no dearth, rather an abundance, of books on this Bengal Muslim leader but unfortunately most of them are either eulogies or sceptical and/or partial assessment of the policies and achievements of Huq. A rational, unbiased, thorough and critical study of Fazlul Huq's activities is an imperative to understand, not only the shifting stances of Huq but also the socio-political milieu of the time. Dr. Biswas has done a yeoman's service in bringing out this volume wherein he has tried, and quite successfully too, to underscore the apparent contradictions in the changing shifts in the policies and politics of Huq, and giving a cogent and rational explanation for all this.

Starting as a small politician in the Bengal arena, Huq gradually scaled the ladder to reach the top, not only at the state level but also in the national reckoning. Though basically a secular, non- communal, progressive and pro-poor peasant leader, he changed his colour to suit his purpose, most often than not, at the cost of sacrificing the very principles for which he stood for. Because of this he is often accused of blatant opportunism as his guiding principle. In the fluctuating vicissitudes of his career, he joined Congress, left it for the Muslim League which also he left, formed his own party, reverted to League, etc. These ought not to be the traits of a state or national leader. But he should be judged not by any universal criteria, but by the circumstances of which he was a prisoner. As has been said, he was a man of contradictions, Moveable but unpredictable.

It is to the credit of Dr. Biswas that he brought out in several well-written chapters, and through a detailed study of the available sources, the contradictions and the shifts in Huq's politics and activities. What is remarkable is that Dr. Biswas gave rational and satisfactory explanation for all the above traits in Huq without trying to justify them blindly.

Abul Kasem Fazlul Huq (1873-1962), popularly known as A. K. Fazlul Huq was perhaps the most popular but at the same time one of the most controversial Chief Ministers, then called the Premiers (under the Government of India Act, 1935) of undivided Bengal. Unfortunately, there had been no critical and impartial review or assessment of his political career As a result his name has almost passed into oblivion after his death.

There is no doubt that efforts have been made since 1962 to write some books focusing on Huq's political activities. Thus was published B. D. Habibullah's Sher-e-Bangla CH) (in Bengali) Barishal, B. S. 1369 and Khondokar Abdul Khalek's Ek Shatabdi (in Bengali) Dacca, B. S. 1369. Both these books highlighted Huq's eventful political life without making any critical appreciation of his character. Later, a biography of Huq, entitled, Life And Achivements of A. K. Pazlul Huq (Barisal, 1966), which was written by A. S. M. Abdur Rab, wherein Huq had been highly eulogized. Hence it lacked any critical analysis of Huq's statesmanship. Perhaps the best book at that time was Kalipada Biswas's Yukta Banglar Shes Adbyay (in Bengali) Calcutta, 1966. Hia Journalistic skill coupled with varied experiences made this book a classic one. It deliberated on the political developments during the last decade of undivided Bengal and exposed some behind-the-scene-activities of the Congress leaders, who had foiled Huq's plan for installation of the Praja-Congress Ministry in Bengal in 1937 and, this, possibly, paved the way for the partition of Bengal in 1947. It did not, however, deal with the opportunistic trend of Huq or his wavering attitude. Shila Sen, too, selected the same period of history to discuss in her book, Muslim Politics In Bengal, 1937-47 (New Delhi, 1976) and looked into the Muslim mind in the changing political scenario of the crucial time of Bengal politics. Both the writers threw some light on Huq's significant political role at that time, but failed to see into the true nature of Huq. Of course, J. H. Broomfield's Elite Conflict In Plural Society: Twentieth Century Bengal (California, 1968), added a new dimension to the study of Bengal politics by carefully examining the conflicting attitudes of the political elites of Bengal during the period under review (1906-47). This book, however, tangentially touched Huq's enigmatic character, and did not go into a detailed discussion about it.

In this context Abul Mansur Ahmad's Amar Dekha Rajnuir Panchas Bachhar Cv) (in Bengali) Dacca, 1970 and Abul Hashim's In Retrospect (Dacca, 1976) deserve special mention. Both these books were almost political diaries of the two writers, who were once close political associates of Huq in Bengal. Those writings made an attempt to explain Huq's controversial political career. But they would have been more useful had they gone deeper into the controversies. Further, Humaira Momen's Muslim Politics In Bengal: A Study of Krishak Praja Party and The Elections of 1937 (Dacca, 1972), discussed the Krishak Praja Party's role under the leadership of Huq. Incidentally, the author was one of the lieutenants of Huq in the organization of the Krishak Praja Party. Similarly, important was Taj-ul- Islam Hashmi's Peasant Utopia: The Communalisation of Class Politics In East Bengal, 1920-1947 (Dacca, 1994), dealt with the peasant problems and rural politics vis-a-vis the different political parties, but it needed a greater thrust on the breaking- up of the peasant parties on the question of the rural demands. Another book, Shatabdir Khantbasuar't'' (in Bengali) Dacca, B.S. 1387, written by S. M. Azizul Huq Shahjahan, an ardent devotee of Huq, made valuable contributions to the study of Huq's life and achievements. This book, although brought into light some unpublished letters and speeches of Huq along with other important documents of contemporary politics, did neither follow chronological order of the historical events, nor analysed the gradual political developments of the period. Ayesha jalal's The Sole Spokesman: jinnah, The Muslim League and The Demand For Pakistan (Cambridge, 1985), revealed jinnah-Huq relationship to a great extent, especially Huq's controversial character, but it did not make any evaluation of Huq's unpredictable political moves. Stanley Wolpert's Jinnah of Pakistan (New Delhi, 1985), also, dealt with Huq's Confrontation with Jinnah to help the study of Huq's political role from a specific angle. But judged from the perspective of Huq's life as a whole the book was found to have some shortcomings. 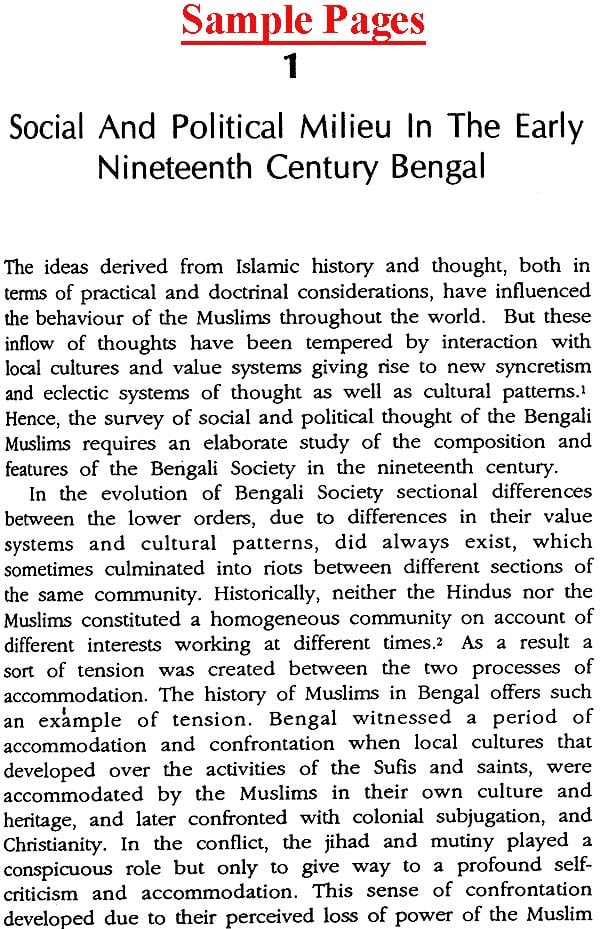 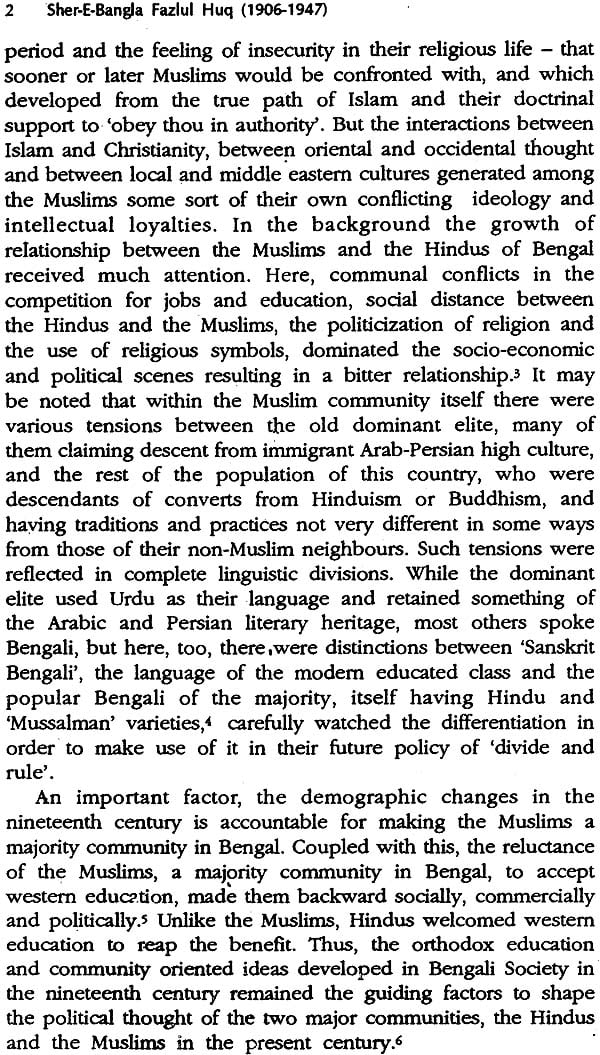 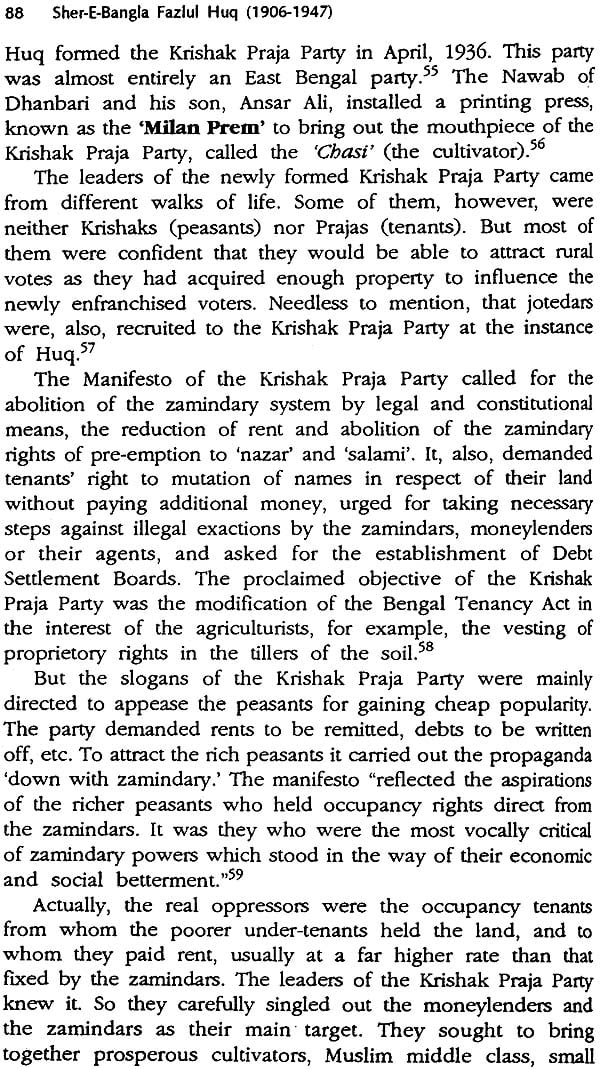 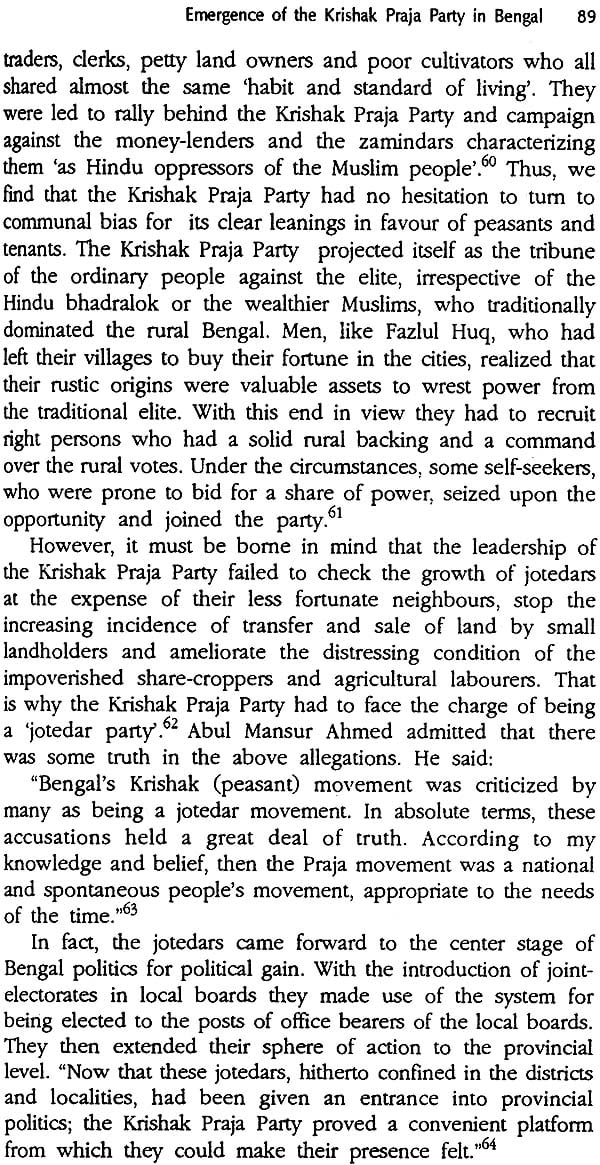 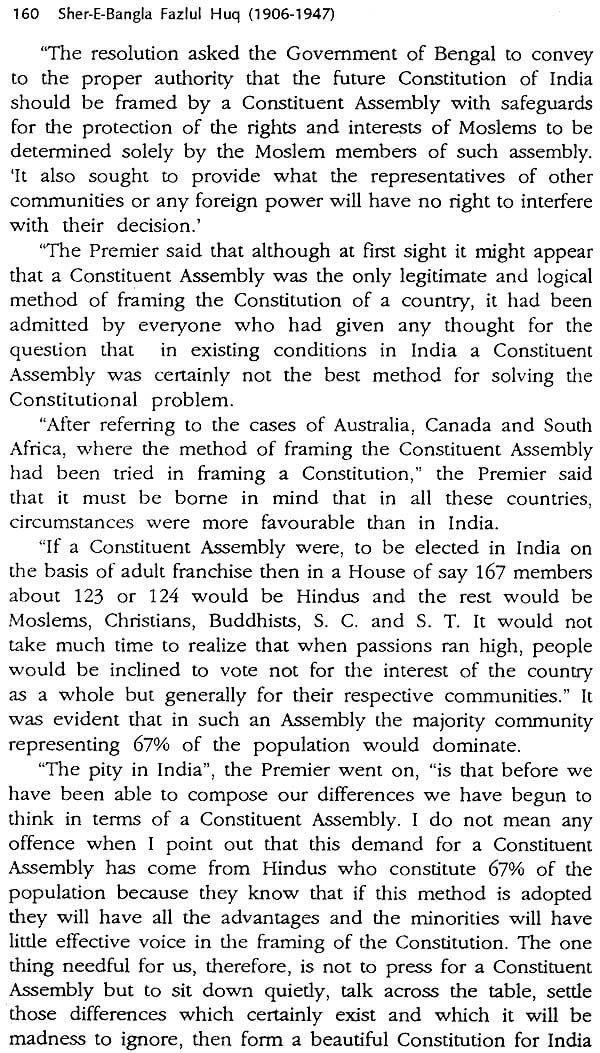 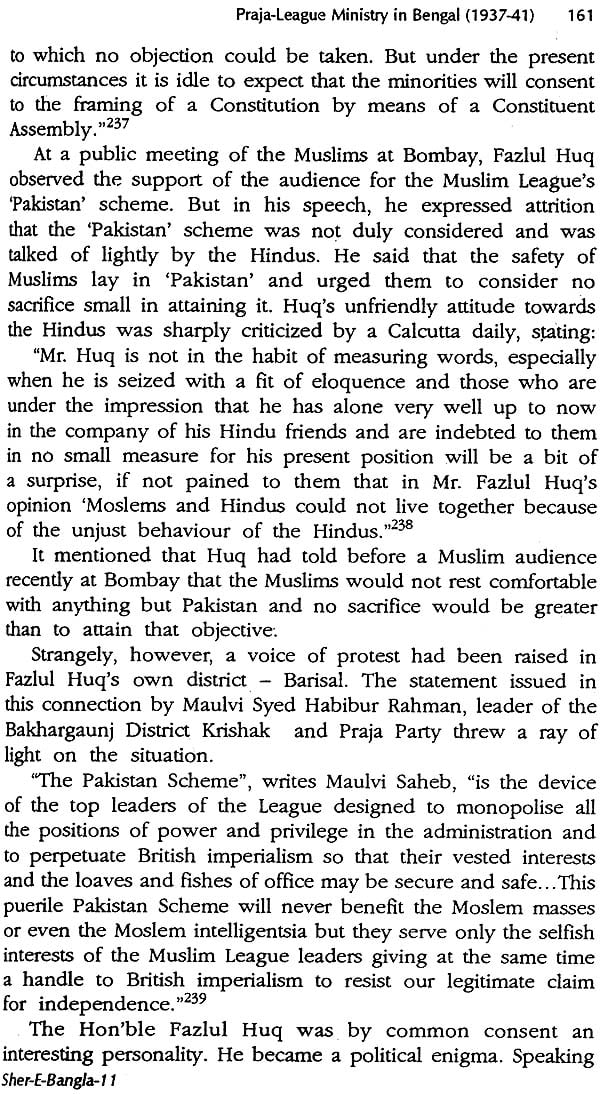 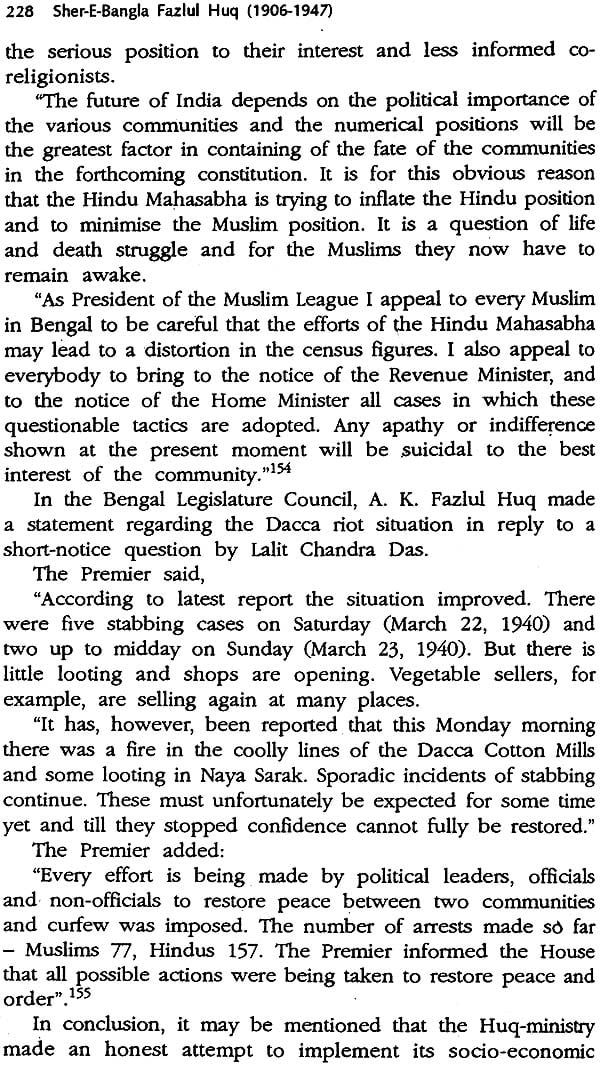 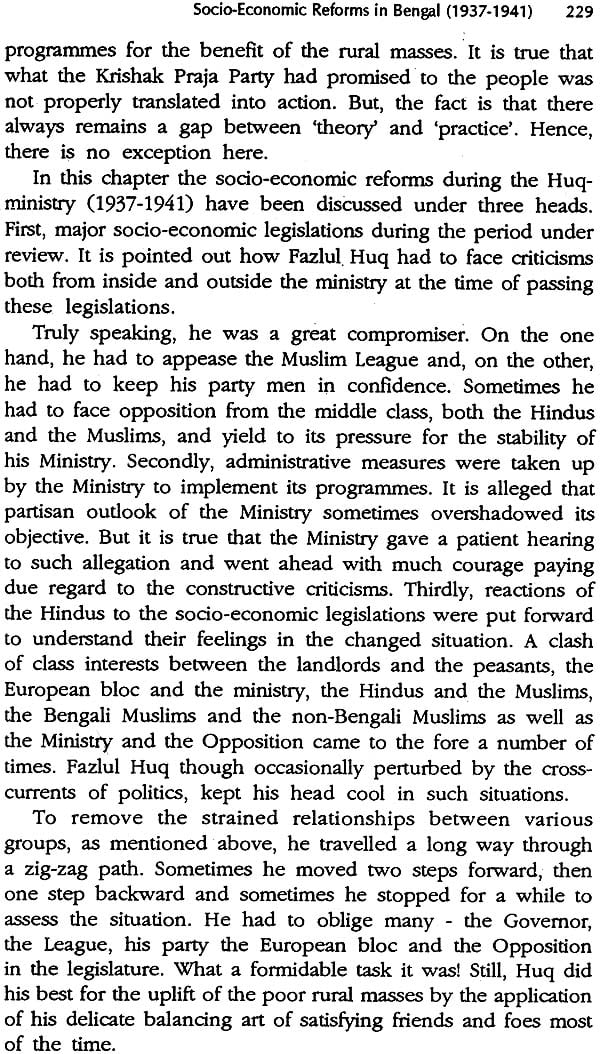 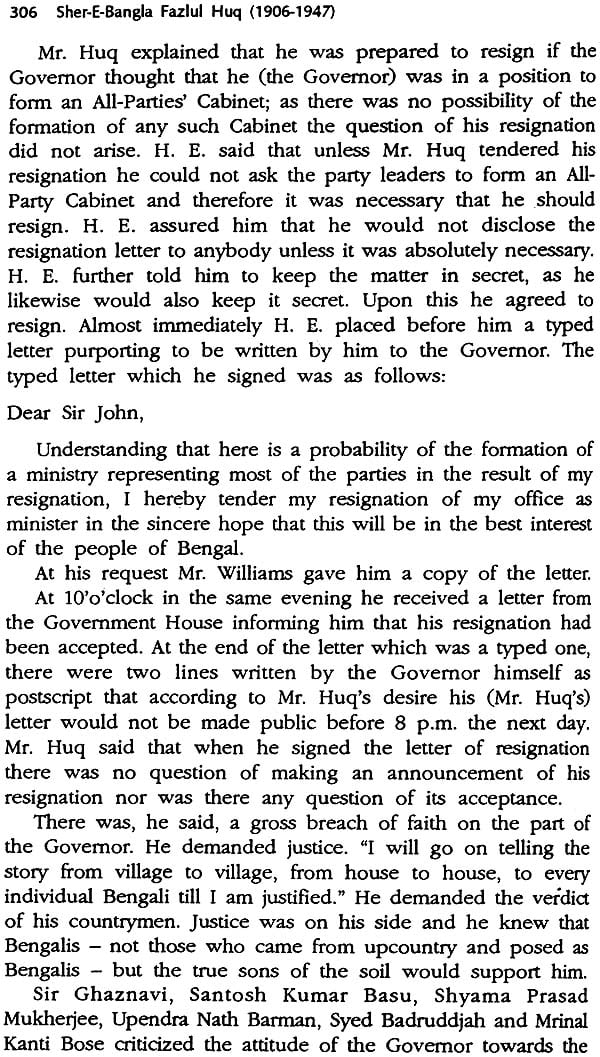 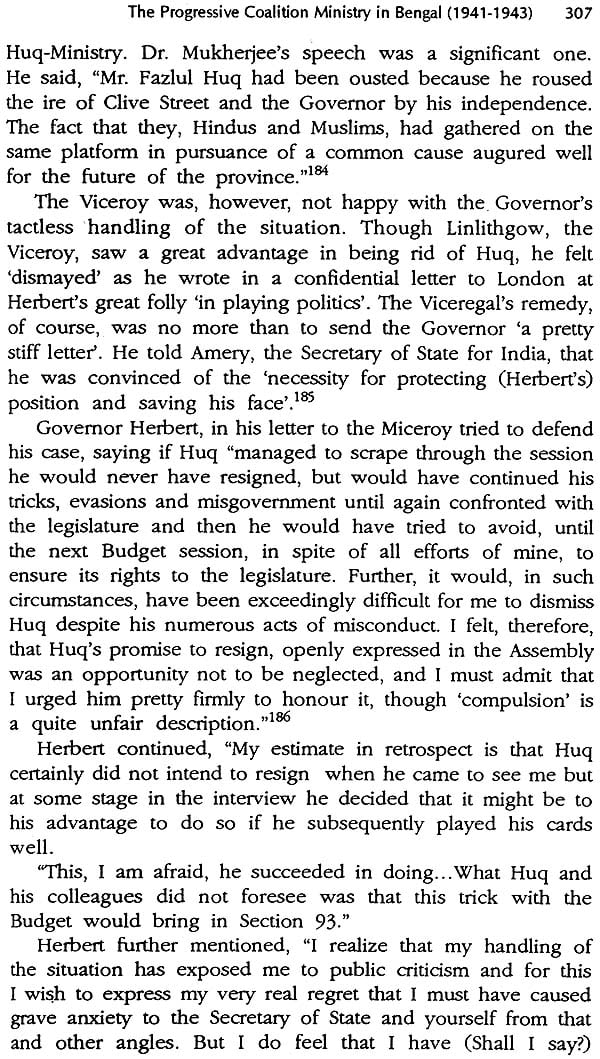 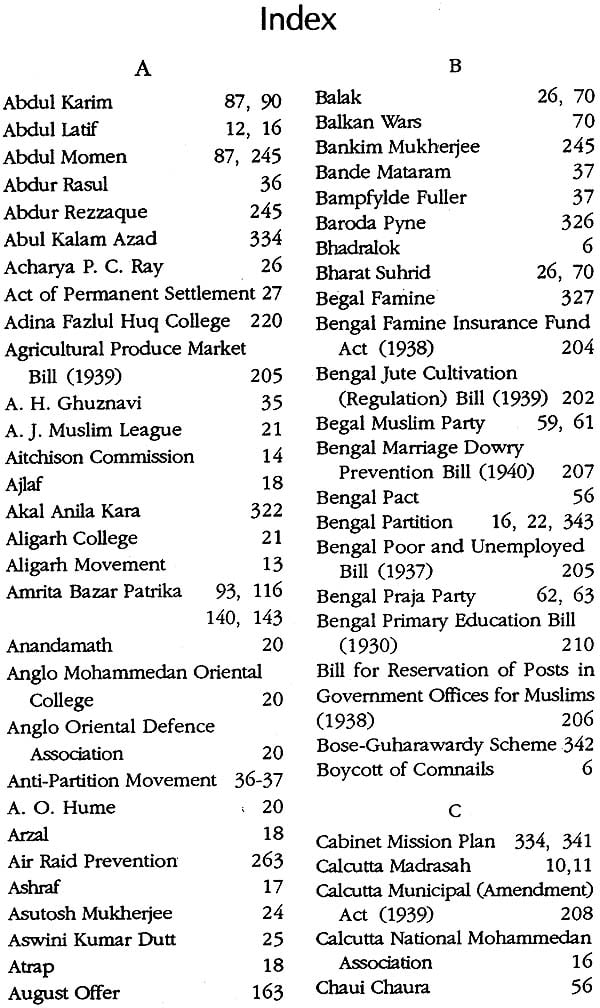 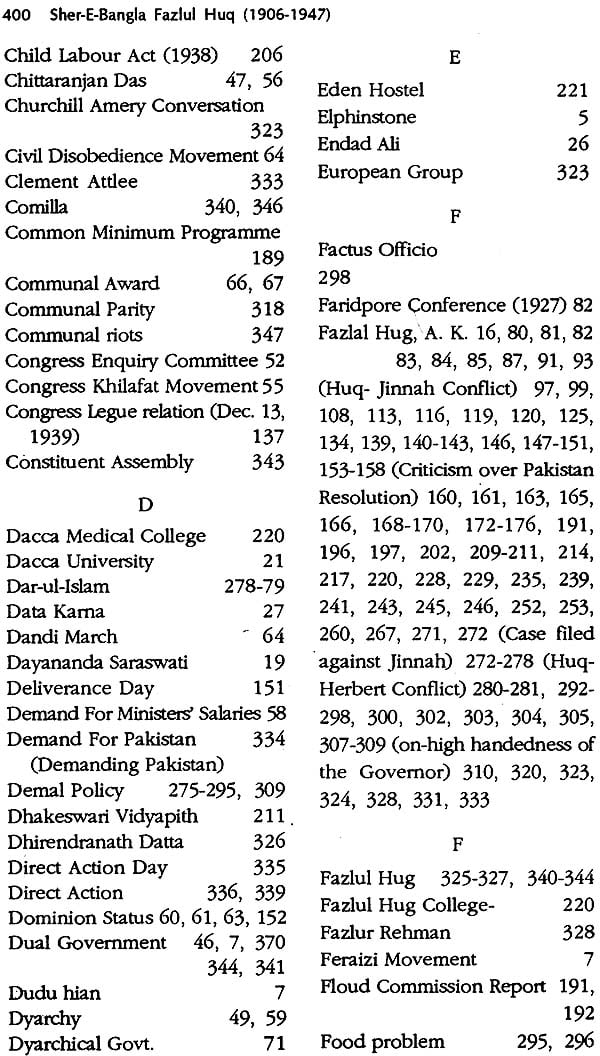