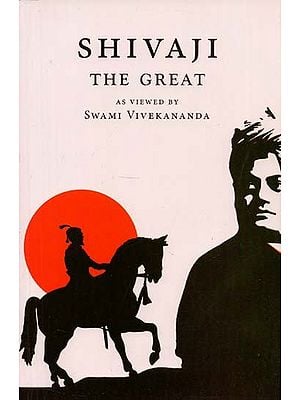 Shivaji The Great (As Viewed By Swami Vivekananda)

Is there a greater hero, a greater saint, a greater bhakta and a greater king than Shivaji? Shivaji was the very embodiment of a born ruler of men as typified in your great Epics. He was the type of the real son of India representing the true consciousness of the nation. It was he who showed what the future of India is going to be sooner or later, a group of independent units under one umbrella as it were, i.e. under one supreme imperial suzerainty.

Shivaji was one of those national leaders whose stature can be compared with only a few in human history. His name evokes in us the spirit of valour, fearlessness, and energy, and above all, love for one's Motherland and Dharma. Swami Vivekananda had great admiration for him. His legacy as an ideal human being, an ideal king, a relentless nation-builder, and an ideal servant of his subjects will inspire generations of humanity to come. Deeply rooted in his own Dharma, and yet with widest sympathies for other religions, he was duty bound to protect his Dharma against the onslaughts of bigoted invaders. This was the striking feature of his character. He became a legend during his lifetime, and this legend keeps growing, even after three centuries. Shivaji the Great presents to us Swami Vivekananda's views about this great national leader.

Chatrapati Shivaji (AD 1627/1630-1680) was one of those national leaders whose stature can be compared with only a few in human history. His name evokes in us the spirit of valour, fearlessness, energy, enterprise, sacrifice, devotion, humanitarianism, leadership, and above all, love for one's Motherland and Dharma. Swami Vivekananda had great admiration for him. Nevertheless, it is our feeling that a word of caution will be in order at this point before the reader gets into this book.

On the surface, anyone who reads Shivaji's life and his exploits may get the impression that he was a staunch Hindu who was against Islam. And Swami Vivekananda's appreciation of Shivaji may be misconstrued as Swamiji's hatred for that religion. In this regard, we would like to categorically state that, nothing could be further from the truth. Neither was Shivaji a hater of Islam nor Swamiji. Both were the finest products of the Hindu Sanatana Dharma. It is Hinduism alone "which accepts all religions as different paths leading to the same Truth" and puts this highest teaching into practice. Whereas the world today is yet to learn and accept this truth, way back in the seventeenth century Shivaji's life reflected this Hindu ideology up to the hilt. It is therefore pertinent to read his life from this standpoint. Was Shivaji a Hindu fanatic with no respect for other faiths?

In that age of religious bigotry, he followed a policy of the most liberal toleration for all creeds. ...Though he was himself a devout Hindu, he could recognise true sanctity in a Musalman, and therefore he endowed a Muhammadan holy man named Baba Yaqut with land and money and installed him at Keleshi. All creeds had equal opportunities in his service and he employed a Muslim secretary named Qazi Haider, who, after Shivaji's death, went over to Delhi and rose to be Chief Justice of the Mughal Empire. There were many Muhammadan captains in Shivaji's army and his Chief Admiral was an Abyssinian named Siddi Misri.

His Maratha soldiers had strict orders not to molest any woman or rob any Muhammadan saint's tomb or hermitage. Copies of Quran which were seized in the course of their campaigns were ordered to be carefully preserved and then handed over respectfully to some Muhammadans.'

Further, as far as freedom to practice one's religion was concerned, Sarkar continues:

...freedom in the exercise of religion was realized in Shivaji's kingdom. He went further, and though himself a pious Hindu, gave his State bounty to Muslim saints and Hindu sadhus without distinction, and respected Quran no less than his own scriptures.

This magnanimous trait of Shivaji, of respecting and accepting all the faiths equally, is corroborated not only by Sarkar but by almost all the historians, Maratha as well as English and others. Yet if one looks at his exploits merely on the surface, there is the danger of one concluding wrongly. This is the reason why there are any number of narratives in air stamping him to be a fanatic, a brig-and, and an indefatigable raider.

In truth, Shivaji was a nation-builder, born to unite people and engage them for the well-being of one and all. He was a born leader of his people, destined to take them along with him for the achievement of a defined goal. About Shivaji's nation-building leadership quality, Sarkar writes:

Before his rise, the Maratha race was scattered through many foreign kingdoms and lived as servants and subjects and not as their own masters. Shivaji united them into one people by giving them a national State with a national king of their own. This was true Hindavi Swaraj. His infant kingdom became a centre of learning and piety, of trade and wealth, and of new literary creation and social improvement.

For his genius as a king with impeccable character, Shivaji was popularly known as Jaanata Raja (in Marathi means "a wise king"). This is in line with the concept of rajarshi of the Vedic lore. One who is a raja (a king) as well as a rishi (spiritually enlightened person) is a rajarshi, in short, "a spiritually enlightened king". More than his daring military exploits, for which he has etched a special place in the hearts of people everywhere, it is his lofty character as a human being coupled with his striking spiritual wisdom that makes him a personality to reckon with. States Sarkar:

As the front page of the book entitled Shivaji the Great suggests, it contains the views of Swami Vivekananda on that legendary Maratha personality, and it was not written by Swami Vivekananda himself. The front page clearly mentions these words: "As viewed by Swami Vivekananda." More precisely, the book contains Swamiji's views on Shivaji as understood and interpreted by one of his devoted disciples of Madras (now Chennai) Dr MC Nanjunda Rao. It presents the opinions and discussions of Swami Vivekananda on the subject held in April 1893, which were not recorded immediately, but much later re-produced from memory by Dr Rao. They were serially published in six installments in the Vedanta Kesari during 1914-16 under the caption "The Echoes of the Teachings of Swami Vivekananda." Only in some cases Dr Rao reproduced Swamiji's exact words. Though reproduced much later, this writing of Dr Rao is immensely valuable for the posterity as it is a "primary" source of information on the subject. Dr Rao was present at the venue when Swamiji discussed this matter. Others who were present at that time, such as Mr Manmatha Bhattacharya and Munshi Jagmohanlal, secretary of Raja Ajit Singh of Khetri, all admirers of Swamiji, did not leave any record.

Vivekananda showed profound admiration for Shivaji as a nation-builder. To him, Shivaji was the embodiment of a born ruler as typified in our great epics. He represented "the true consciousness of the nation." His greatness lies in the fact that he not only founded a strong independent Maratha state, but also shaped the character of the Maratha race through its military organisation, political administration, language and literature, social customs and religious fervour. Vivekananda correctly observed misconceptions and inaccuracies in many Muslim chronicles, Marathi chronicles, as well as Western writings, where the description of Shivaji has widely ranged from being a freebooter and Hindu fanatic to an avatar or incarnation of God. Swamiji harped upon the need for removing these misconceptions and studying properly the original documents, including the independent Persian manuscripts. This work was later undertaken by researchers on Maratha history like VK Rajwade, Jadunath Sarkar, GS Sardesai etc.

Vivekananda in his discussion highlighted how deep an impact mother Jijabai exerted on her son Shivaji right from his birth. This spirited lady, proud of her Yadava ancestry, developed in her son a spirit of confidence and self-assertion and became to him a veritable guardian. He was close to her mother till her death in 1674 (a few days after his grand coronation at Raigarh). On all occasions, including political and military decision-makings, he sought the blessings and guidance of his mother who was a devout worshipper of Goddess Bhavani. From her, Shivaji inculcated a feeling of profound reverence for the Goddess who was the guiding force to the mother and son in all vicissitudes of life. Another firm support Shivaji received in his boyhood days was from Dadoji Kondadev, the administrator of his father Shahaji's estates. It was from him that young Shivaji learnt the arts of peace and war.

With keen historical sense Vivekananda analysed the contemporary Bhakti-Sufi enlightenment in India in the context of general religious upheaval in Europe and Asia. He laid stress on Shivaji's intrinsic spiritual bent of mind and his fondness for devotional katha and music. Shivaji frequently attended the sermons of Tukaram and other saints, and got initiation from Samartha Ramdas. Vivekananda elaborately pointed out how keenly Shivaji longed for initiation from Ramdas, had his vision in a dream, then found him in a forest in deep meditation for a few days, and finally one day got his blessings. This was the period when Shivaji bore great physical and mental sufferings just owing to his intense desire for being blessed by the saint who did not open his eyes from meditation. Finally Ramdas initiated Shivaji. Ramdas was not only his spiritual Guru, but much more than that. 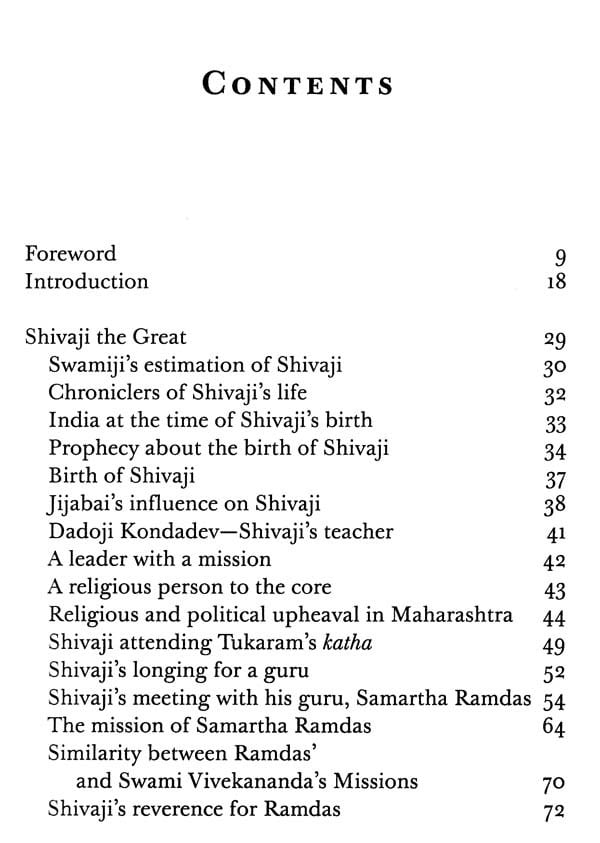 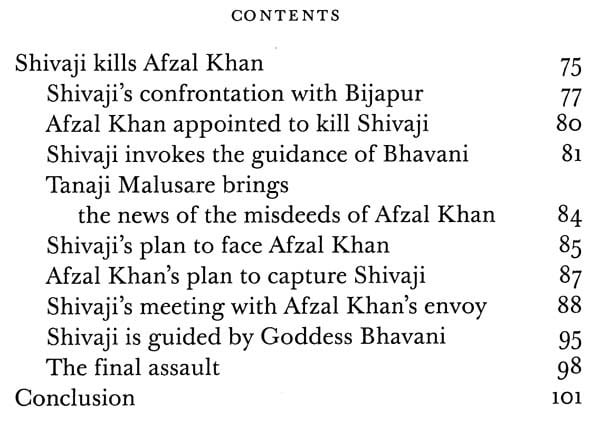 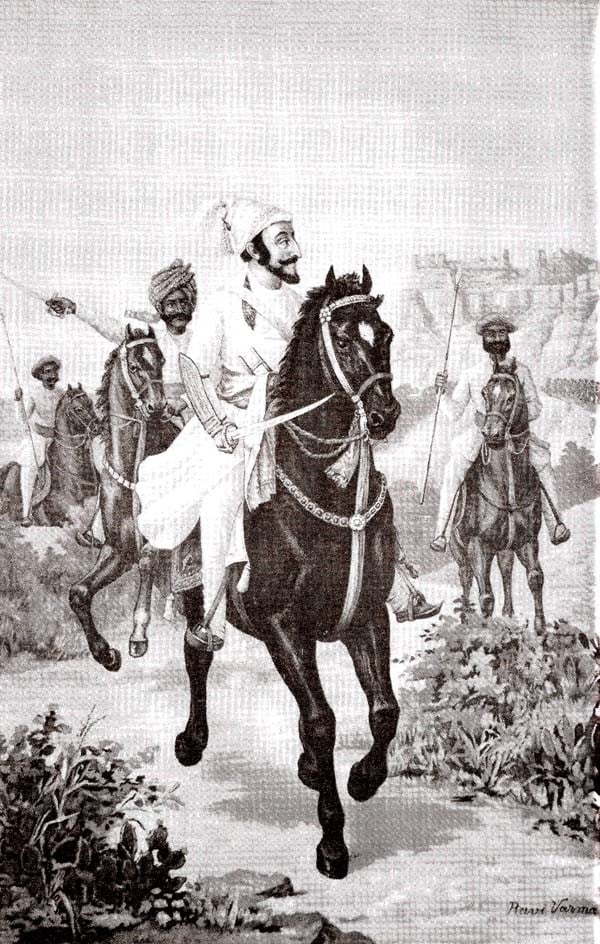 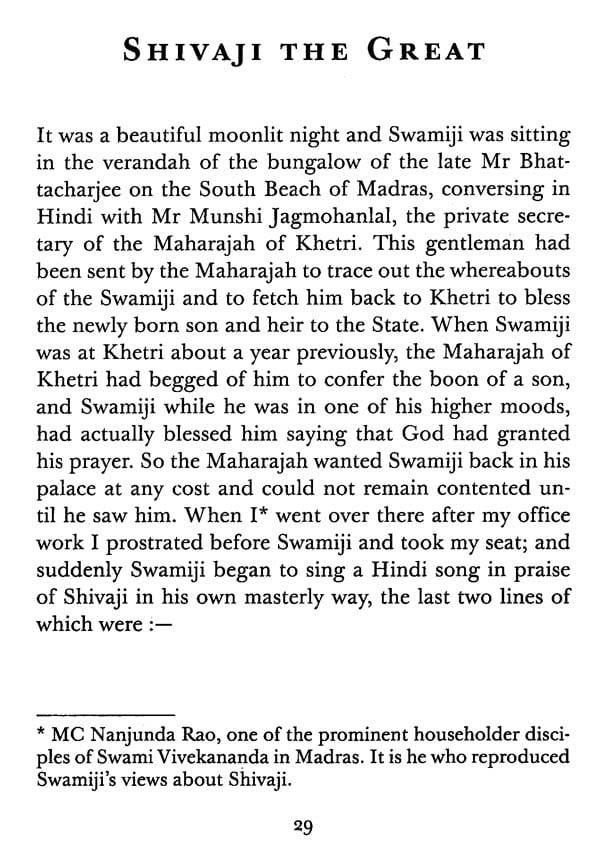 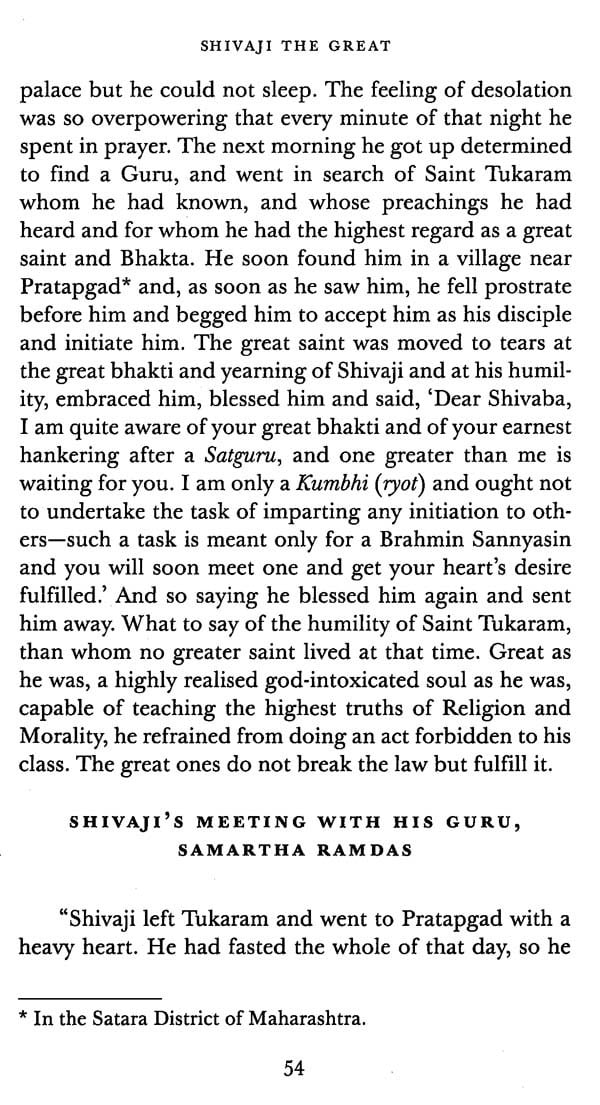 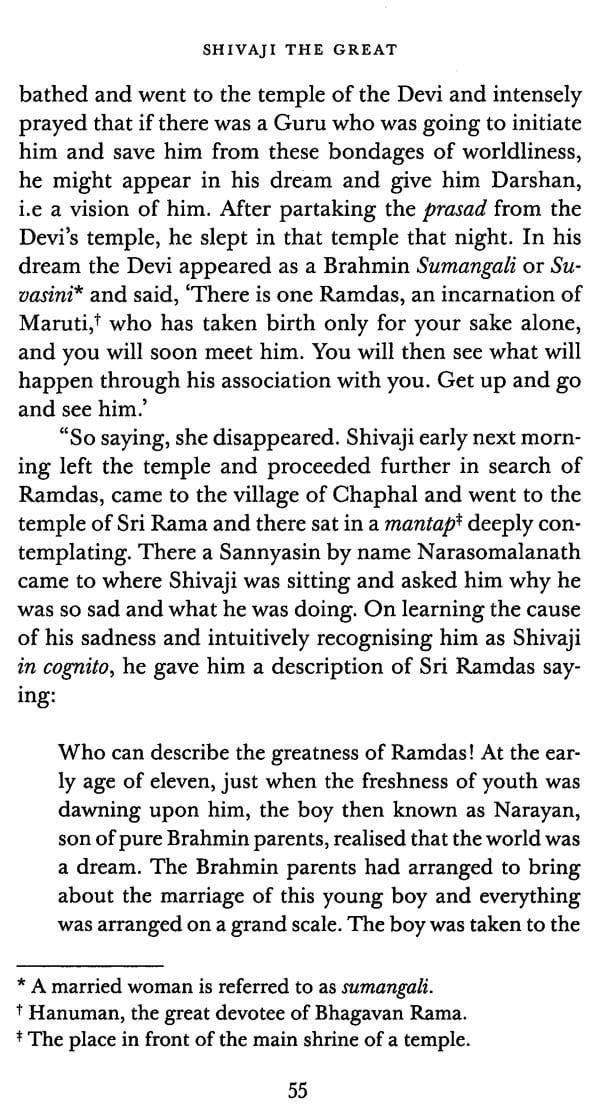 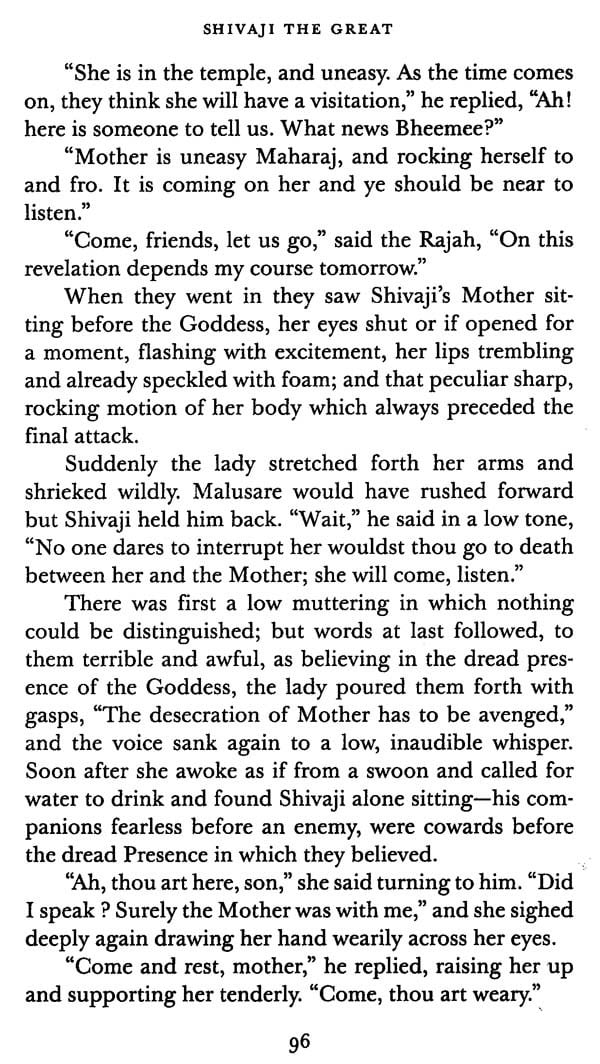 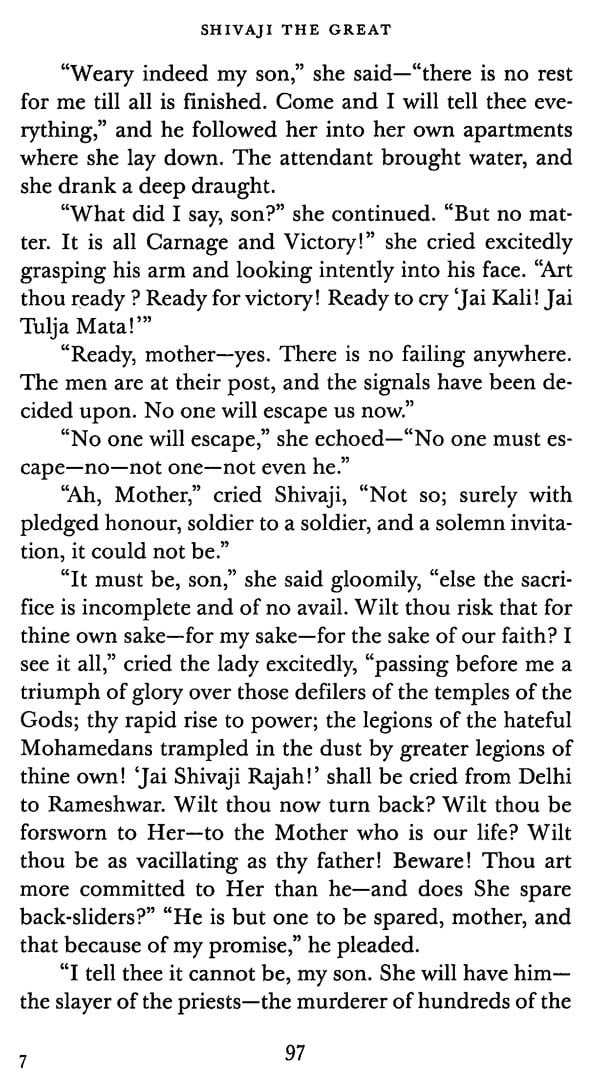