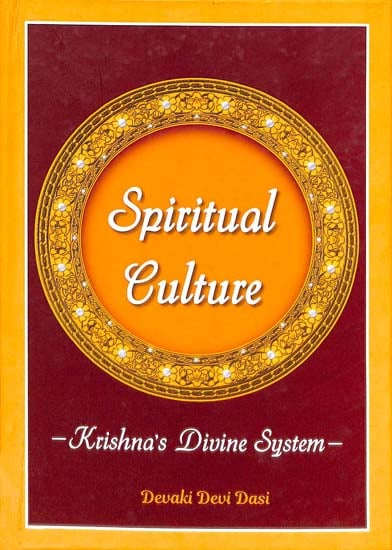 Devaki Devi Dasi was born in Germany in 1958 and after a long journey of searching, joined ISKCON in Sydney, Australia in 1985. She spent four years in the Sydney, brahmacharini ashrama, learning the basics of devotional life. She took initiation from Bhavananda Prabhu and later re-initiation from Prabhavishnu Prabhu. She is now a disciple of His Holiness Niranjana Swami Maharaja.

During her ten years in married life (1989-1999)she preached in Riga, Latvia, and spent adventurous years in helping to pioneer the first more organized temple in the former Soviet Union. In 1999 her husband remarried a non-devotee, and Devaki Devi Dasi then became a renounced traveling preacher, spending six months per year in India and Bangladesh, and the other six months in various countries around Western Europe, Ukraine and Moldova. Recently she has been expanding her preaching and also visits development of various projects and holy places in Nepal and Bangladesh.

In Bangladesh she is a actively in the IYE student preaching, conducting seminars and IYE festivals under the guidance of His Holiness Bhakti Purusottama Swami Maharaja.

During her years of service in Bangladesh, she developed deep insights into Vaishnava culture that have enriched her spiritual practice and inspired her preaching. She is sharing this wisdom worldwide in the courses entitled ‘Exploring the Roots of Spiritual Culture.’

In Unlike she has served under the expert guidance of His Holiness Niranjana Swami Maharaja, spreading the culture of care for the past seventeen years: on a personal level by serving as a spiritual guide and mentor to many devotees, by assisting devotees to become spiritual guides themselves, and by lecturing and conducting seminars.

This little book is not meant to establish what is right and what is wrong. Rather, it is meant to provide insights into the universal underlying principles of spiritual cultures, which is ultimately Krishna’s culture. Krishna has given us a system in order to establish stability and harmony in this world so we can wholeheartedly develop our forgotten relationship with Him.

We can view all our social problems in, modern times as global reactions for no longer following Krishna‘s system. Problem such as divorce, single motherhood, neglected, violence towards women, child abuse and so on room in Krishna’s culture. They have come about because our disease is to think that our modern systems are far better than His system. We take Krishna’s systems to be old-fashioned and outdated. As Srila Prabhupada said: “Every material problem has a spiritual solution.”

In this book we will discover so many spiritual solutions to our social problems. Otherwise, what value and relevance would Krishna consciousness have if we could not offer answers to these issues?

Unless we as a spiritual society deeply understand the universal principles of spiritual culture, there is a great danger that we will lose them in the name of reformation and modernizing. We will fall into the trap of thinking that we have to adjust our spiritual principles and values to all sorts of new and degraded Kali-yuga trends in order to make Krishna consciousness acceptable to the public. This trend has in fact happened in all other spiritual cultures, and thus their spiritual power has become increasingly diluted and ultimately lost. This danger is also there for Lord Chaitanya’s sankirtana movement.

Useless we clearly understand the universal principles of spiritual culture and we try to preserve them while at the same time being able to adjust the details according to time, place and circumstances it will be very difficult to make Lord Chaitanya’s sankirtana movement powerful.

If we are struggling with the same social problems as the secular society – what do we have to show to the world? We have nothing of substance to offer.

People have become frustrated and exhausted in their search for alternatives. Many intelligent non-devotees understand that humanity is heading in the wrong direction. Some people can recognize the fact, that although there is so much material progress available, the quality of life is not increasing. They are indeed looking for an alternative lifestyle and culture.

Krishna’s system is accessible. If we can demonstrate to the world how to live a civilized and cultured human life, then we have something to show. This will make Krishna consciousness very powerful and attractive. But as long as we are facing the same problems as general society does, then we have nothing to offer except perhaps an interesting philosophy.

In this book we will systematically address many deep and interesting topics. It is not meant to provide spiritual entertainment.

I would like to take the readers for a little internal journey to inspire us to re-think old concepts, which will hopefully lead to new discoveries. This book is meant to shake us up and put into question today’s norms and modern worldviews.

We might encounter some moments when our mind and false ego will rebel. We might think, “No this cannot be. I don’t want to hear this.”

Let us be ready for a little heart surgery.

As long as our heart is full of material attachments, desires, likes and dislikes, the ground where pure bhakti can grow is not prepared.

In order to be ready to transform, we need an open mind and heart. There are two small words that block any learning process –“I know”.

If we think, “I know”, then we will not be able to learn anything , and it doesn’t matter the length of time we may have been practicing Krishna consciousness. We will be blocked by our intelligence and false ego, and won’t be able and understand, and we won’t be able to transform. This book should be read with the attitude of “I don’t know. Maybe I can learn something here.”

It is interesting to observe that the main entity that does not like spiritual culture and rebels against it is indeed the false ego. Since material life and its culture is centered around increasing and blowing up the false ego- naturally our ego will protest when confronted with the topics of spiritual culture.

The understanding that It is simply our ego that stands in our way and blocks us will perhaps make it easier to neglect that false ego’s demads. 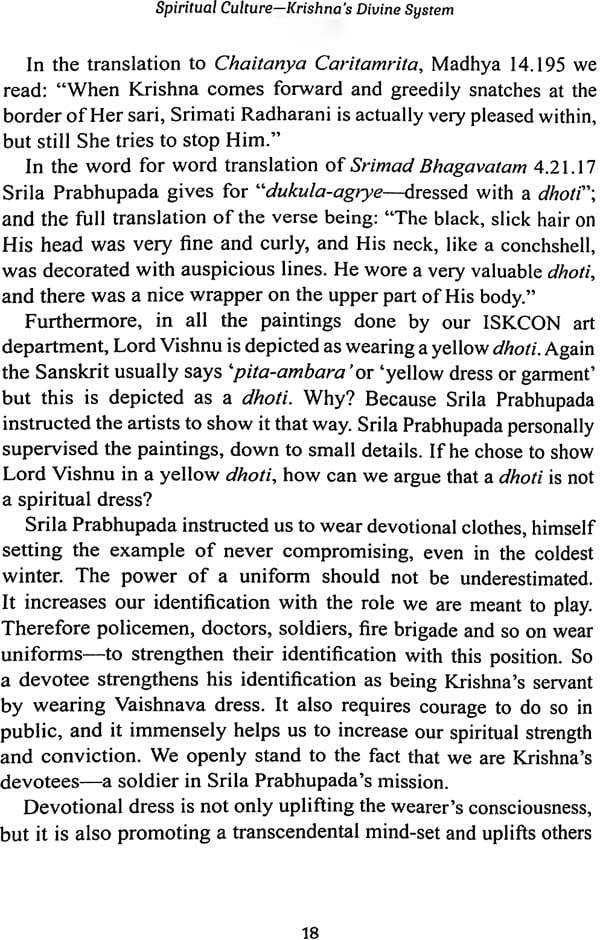 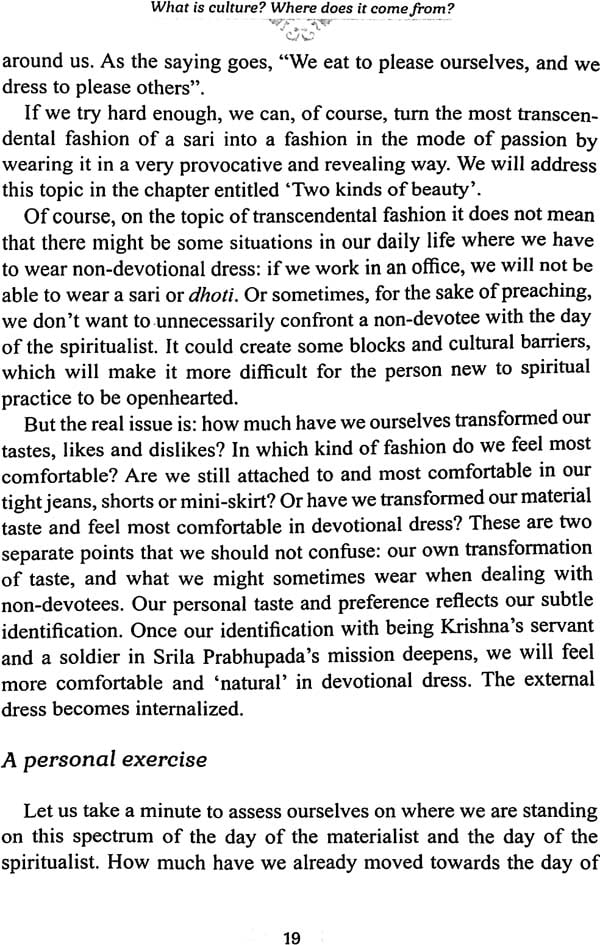 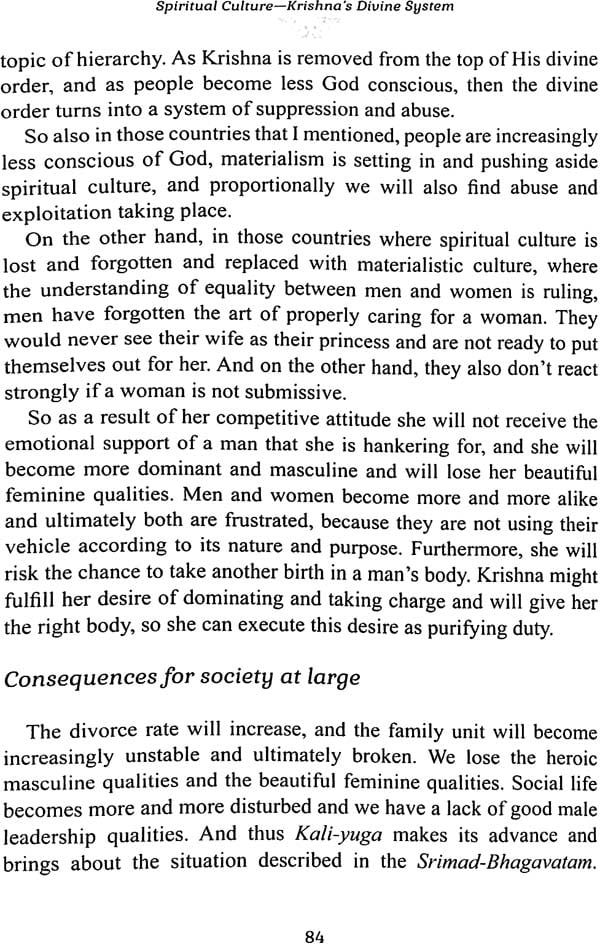 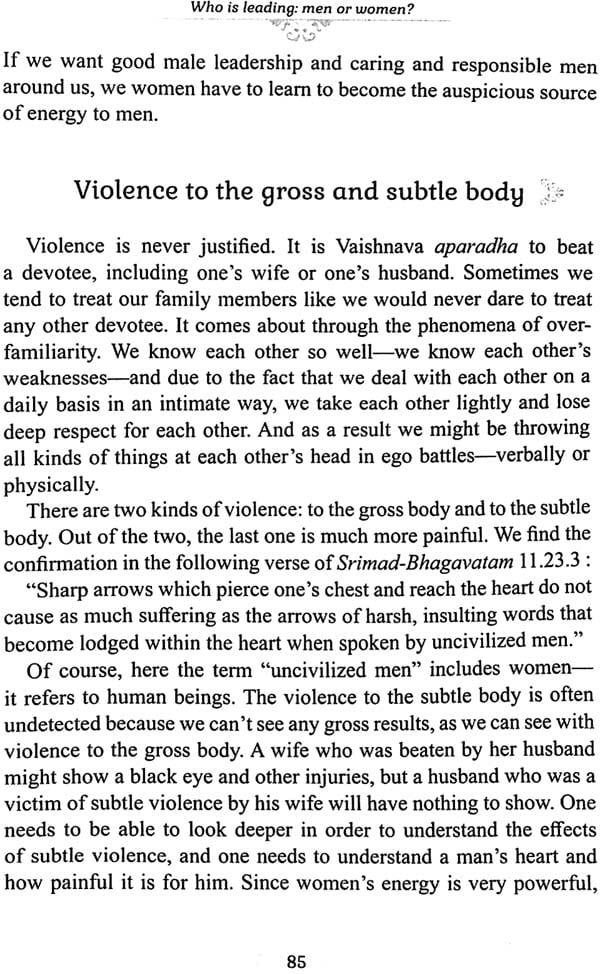 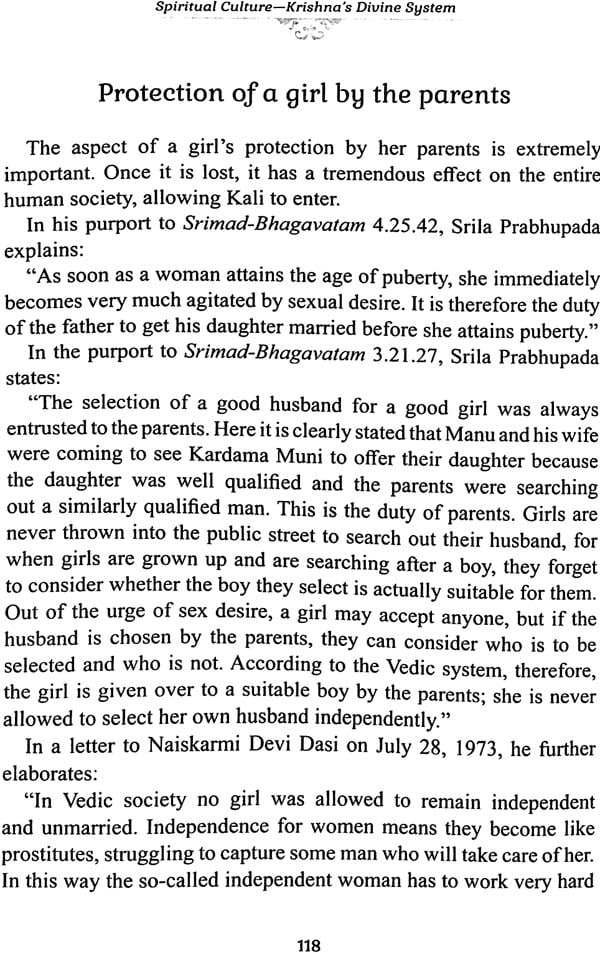 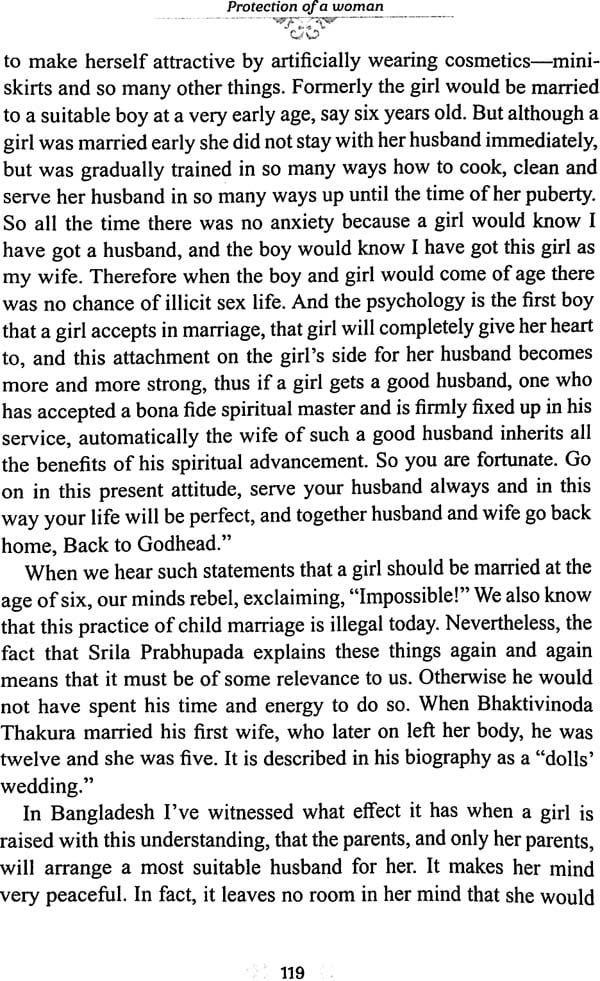 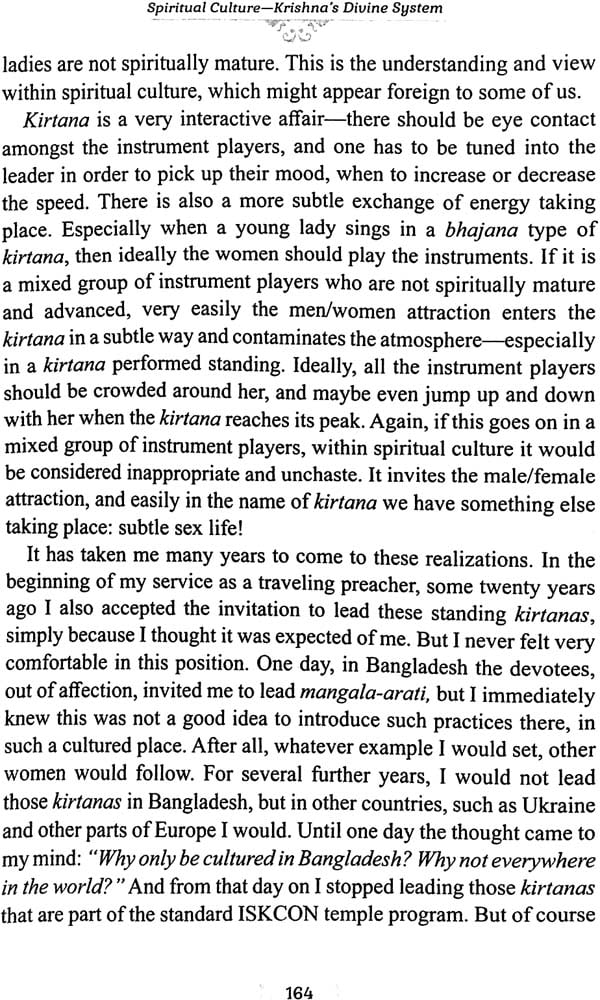 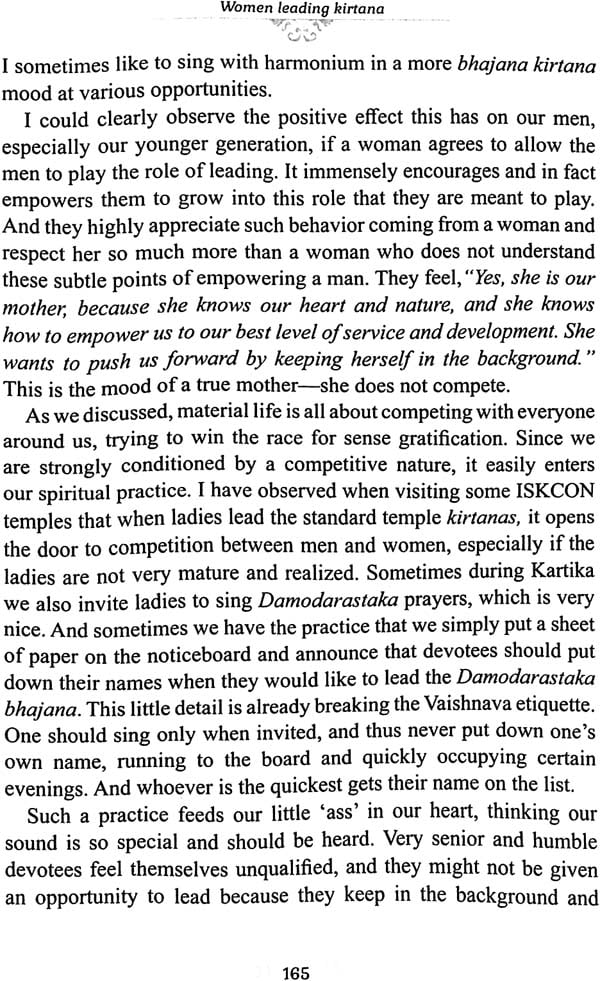 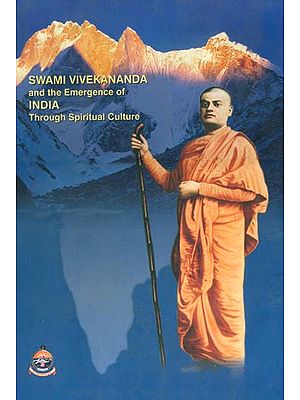 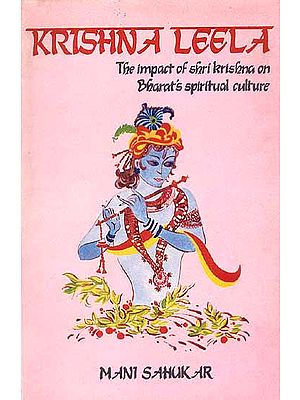 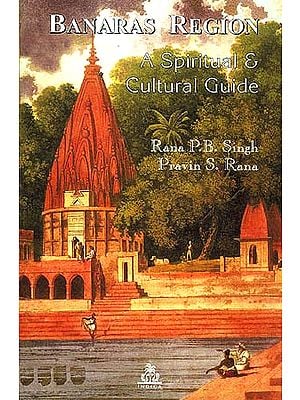 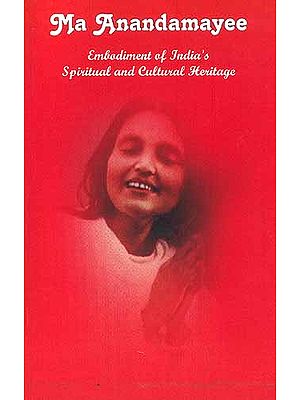 Ma Anandamayee: Embodiment of India's Spiritual and Cultural Heritage
By Shri Sunil Guha
$12.75
Out of Stock
$17  (25% off) 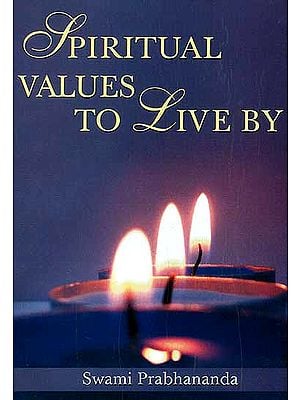 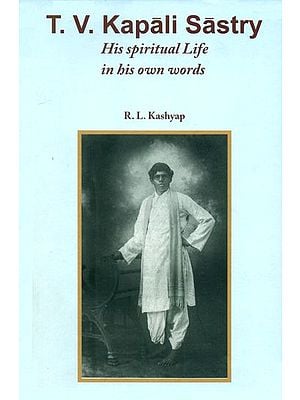 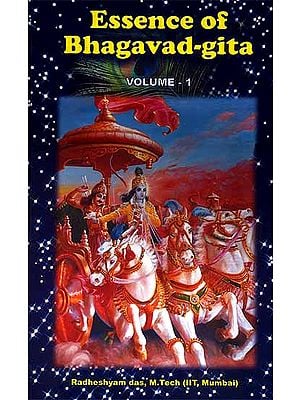 Essence of Bhagavad-Gita Volume-1 A simplified crash course for the young and old based on the five volume series, 'Spirituality for the modern youth'
By Radheshyam Das, M. Tech (IIT, Mumbai)
$30.75
FREE Delivery
$41  (25% off) 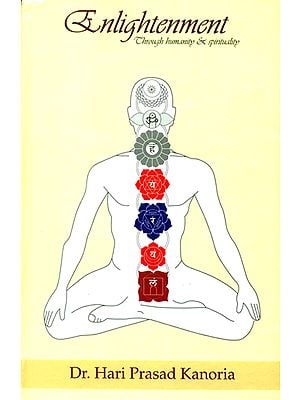 Enlightenment: Through Humanity and Spirituality
By Dr. Hari Prasad Kanoria
$24.75
FREE Delivery
$33  (25% off) 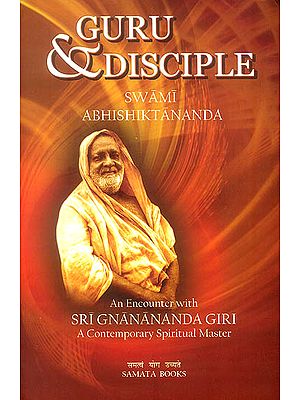 Guru and Disciple (An Encounter With Sri Gnanananda Giri A Contemporary Spiritual Master)
By Swami Abhishiktananda
$23.25
Out of Stock
$31  (25% off) 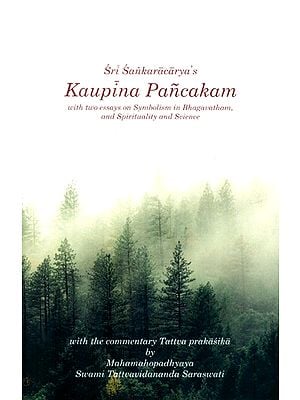 Kaupina Pancakam With Two Essays On Simbolism In Bhagavatham, Spirituality And Science
By Swami Tattvavidananda Saraswati
$12
$16  (25% off)
Add a review
Have A Question