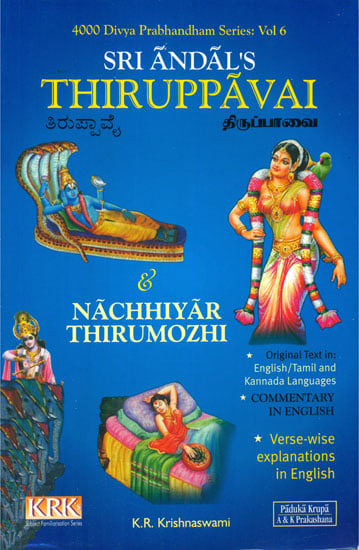 The volume in hand comprising Sri Andal's Thiruppavai and Nachhiyar Thirumozhi completes my journey of 4000 Divya Prabhandham started in 2002, the first publication being Sri Nammazwar and Thiruvoimozhi. This also happens to be my Twenty- fifth book overall, covering other subjects like those on Prasthana Traya, Desika's works, general subjects like agamas, sthothras, Gadya Traya, Hayagreeva Avathaara, Sharanaagathi etc., a feat by itself for a small writer like me !

The books on 4000 Prabhandham, eight in all, run to 1200 pages : some books provide even the original text in multiple languages while all the others expect the reader to keep the original, in the language of his choice, by his side while reading my book. The numbering of decads (dashakas) and Patthus followed by me is exactly the same as in original text and can be easily connected.

All the books conform to my style of presenting somewhat condensed explanations without sacrificing any 'rasa' or import intended by the Azwar with an eye on readability and appropriate brevity. Going by the response to my earlier books, I am sure, the present book also will be well received.

The twin works of Andal or Godhadevl presented in this volume, the last in the series, are intended to sing mangalam to the eight- book series - I have left it for the Thayar to do ! I have done sevakalam of 4000 Prabhandham close to two decades in Andal temple at Jayanagar Andavan Ashrarnam and consider this eight-book series as its 'phalam' ! I cannot adequately thank the Divya Dampathis for their kindness.

No one can guess the number of books that have been written on Thiruppavai and books will continue to be written in future too. It has attracted writers of all hues to try their hand and I am no exception. But one thing is common. Everyone in someway falls back on commentaries of Poorvacharyas like Periya Achan Pillai, the vyakyana chakravarthy However each writer has his own style of presentation - one writer who started his explanations in prose became so emotional, half-way through, he started becoming poetic and has presented them in the form of poetry ! Each writer has his own emotional experience while writing on Thiruppavai - the divine influence percolating in its own way I Didn't Krishnadevaraaya, an emperor of sort, turn emotional after studying Thiruppavai and write a book himself.

The original text of Thiruppavai has been given in the book in three languages. I have given short lead-notes for each pasuram to connect the one before and the one being treated. Given is also the literal meaning of the pasuram followed by the section 'Developing the message of the pasuram' besides other important commentaries. It is hoped that this style of presentation covers all aspects ; brevity has not been lost sight of.

My work on Thiruppavai was started in the US in 2006 but I could not make any headway then ; probably the real muhoortham had not arrived! This year, i.e. 2010, proved to be lucky and what a coincidence : I had time for it only when I arrived in the US again ! Corvallis, a small town on the west coast with its lush green surroundings, and a temperate climate provided the right backdrop and environment for this important book. The first draft was ready in about 2 weeks flat ! The final draft did not lag behind.

I thank Mrs. Sudha for the type setting, attractive as usual, and Sri Sharada Prasad for an excellent job of printing. My young friend, Kiran, has done a befitting cover design for the title. I thank them all and wish them well. My thanks are also due to Sri L. Sridhar who provided me verse-wise colour pictures of Thiruppavai.

Vedas and upanishads have been our life-breath fashioning our lives for millenniums. However their accessibility to common people and all varnas have always been questioned ; learning! Vedas calls for a guru-shishya relationship extending over a Iong period. As though to provide an easier option a parallel streamreligious literature based on spontaneous God-experience came being and it is not much older than 4000 BC, although the estimates bring them much too nearer. This literature going under the name of Naalaayira Divya Prabhandham is a collection of outpourings I dozen mystics, known as azwars who by definition delved deep in todivinity. Of them eleven were men and only one was woman-saint by name Andal, also known as Godha.

Godha composed two works Thiruppavai and Nacchiyar Thirumozhi. These two works are included in the first thousand of 4000 Divya Prabhandham soon after her foster-father's Thirumcozhiknown as Periazwar Thirumozhi, Periazwar being Her father ( Capital'H' like in Her here, will be used for Godha, since she was none other than Bhoodevi Herself). The father and daughter together have contributed more than 600 verses or more than fifteen percent the total Divya Prabhandham.

Before delving into one of the most important sharanagathi works namely, Thiruppavai, it is pertinent to look at the life of its author Godha. She was not born into this world like any of us, that is, spending nine months in the womb - even Threthayuga and Dwapara avatarapurushas had to stay in the mother's womb - the only exception possibly being Narasimha. Her birth was very much likeSeetha's. Periazwar, signifying that he was a great scholar, also known as Pattar Piran (a doyen amongst scholars) had been doing self-allotted service of providing Tulasi garlands, made by himself andwith the Tulsai grown by himself picked from his own garden. One 'morning when he went to pick Tulasi, lo ! He found a miracle of an attractive baby girl in a Tulasi pit ! The day was -

A bachelor that he was, he could not have expected a better gift from the Lord, rewarding him as it were for his selfless-service and for (sometime back) doing involuntary ashirvadham to Him through his Thirupallandhu (long live the Lord I) which also brought him the title, Periazwar.

The azwar gave an appropriate name to the little girl by calling Her Godha: 'G6 means speech (vak) ; dha - the one who gives it. Also Gava dheeyathe - Godha : (she was) given by Bhoodevi. She is also called 'Andal' meaning the one who ruled the Lord Herself.

In Tamil, she is known as 'Kodhai' (the one with beautiful hair). Her 'paamalai' or 'paat mala: !', the present subject, which the Lord accepted, signifies resemblance of Ubhaya Vedhanthas, in sanskrit she is known as Godha, and in Tamil Kodhai ; and for both He is the goal

UNIQUENESS OF THE PLACE OF HER BIRTH

The place where she was born, Sri Villiputthoor is also known as Varaha Kshethra - Sri Varaha and Bhoodevi have had an important connection for upliftment of chethanas : Bhoodevi prevailed on Varaha to assure that He will accept sinning chethanas after sharanagathi (done when one is in good health). Further this is the eighth holy place in the list of eighteen in the then wealthy and dharmic Pandya kingdom. The other name for this holy city is 'Pudhuvai' !

The deity here is Sri vatapathrashayee, who became Krishna for Godha and He became the centre for worship for southern gopis which we will examine later.

The place also had 'acharya anugraha' in the form of Periaszwar. who looked after that place.

And the deity, Bhoodevi Herself, who chose to be born as Godha, selected Sri Villiputthoor I A combination of gold / pearls / gemstone!

Periazwar started teaching his daughter when she was very young, the age when ordinary children start playing ; Ramayana, Bhagavatha etc. and Godha imbibes all shastraic imports, and Lord's kalyana gunas which her father used to explain to Her. This learning led to Her deep 'bhakthi' in the Lord : bhakthi according to a suthra is pure love and is ambrosial in nature.

SELF-WORN GARLAND SENT TO THE LORD "SHOODIKODUTTHA NACCHIYAR" The first revelation about Gooha's avatara was somewhat of a shock to Her father! The young girl had observed Her father making garlands and offering them to Vatapathrashayee (translated as the Lord lying supine on a fig leaf). Curious enough, she started wearing Herself the garlands to see as to how the Lord would appear with them and She would put them back into the basket as though nothing was amiss. One day the truth broke out and the azwar realised that he was offering the same garlands already worn once by his daughter. Naturally angry, he felt deeply for the apacharam that was going on for some period, and he stopped supplying garlands. 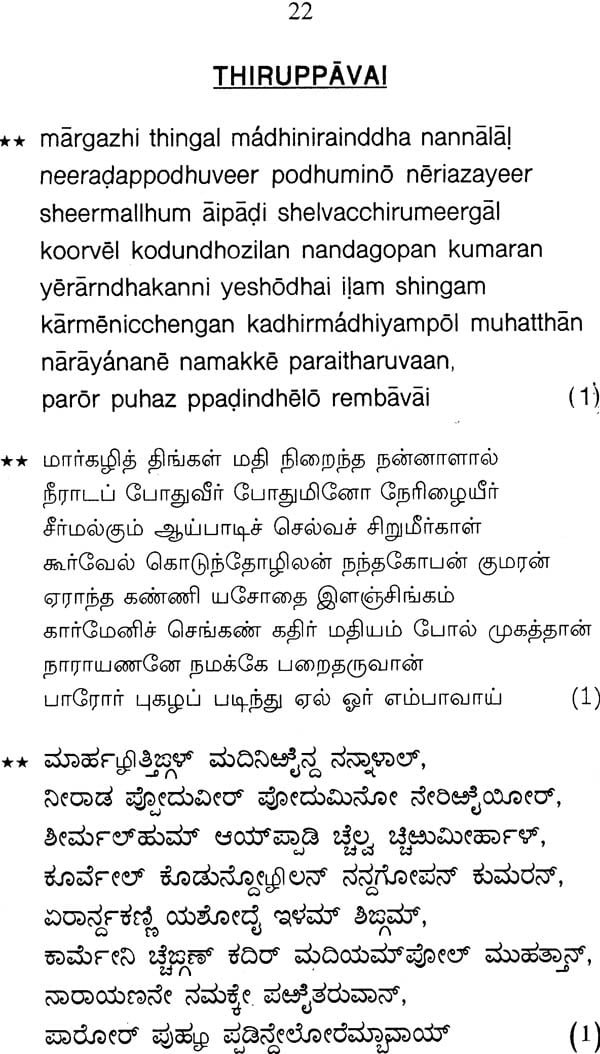 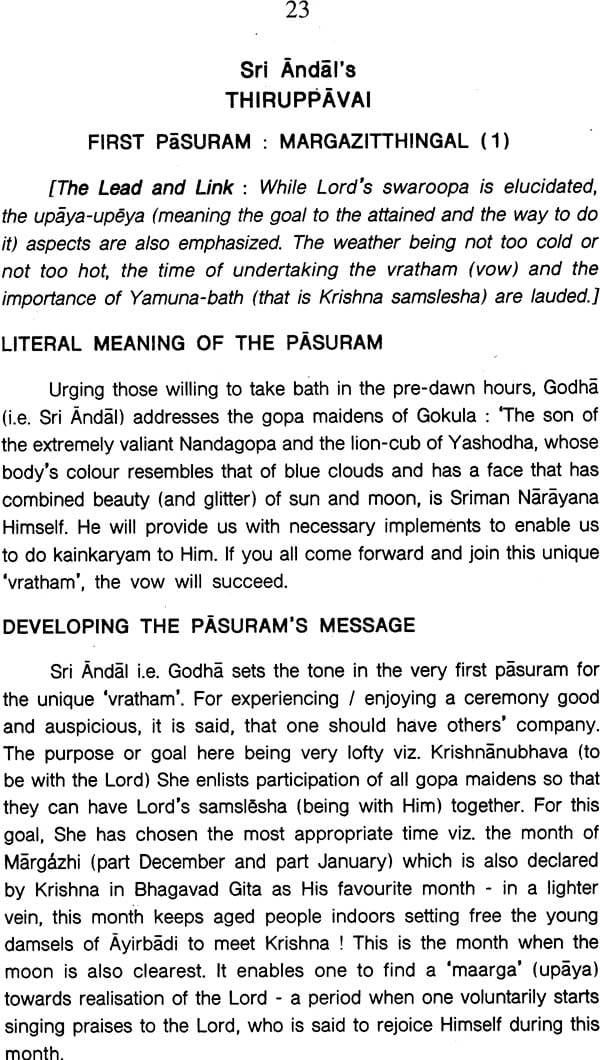 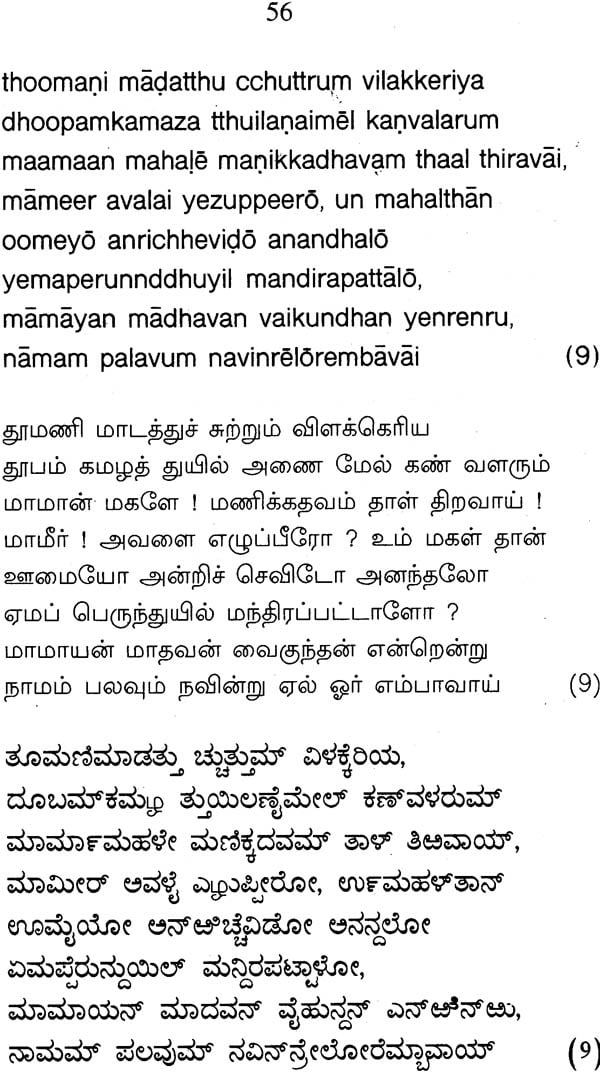 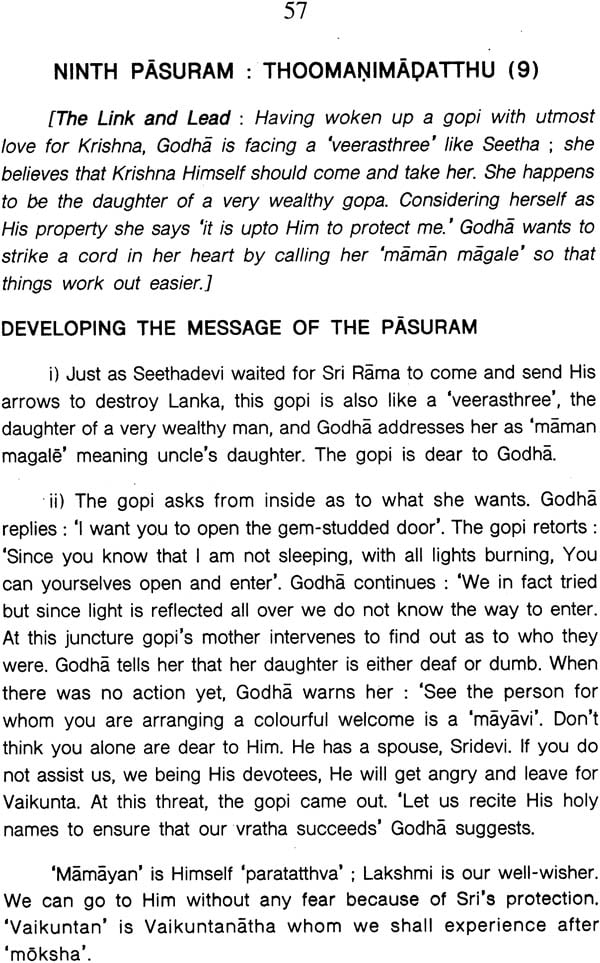 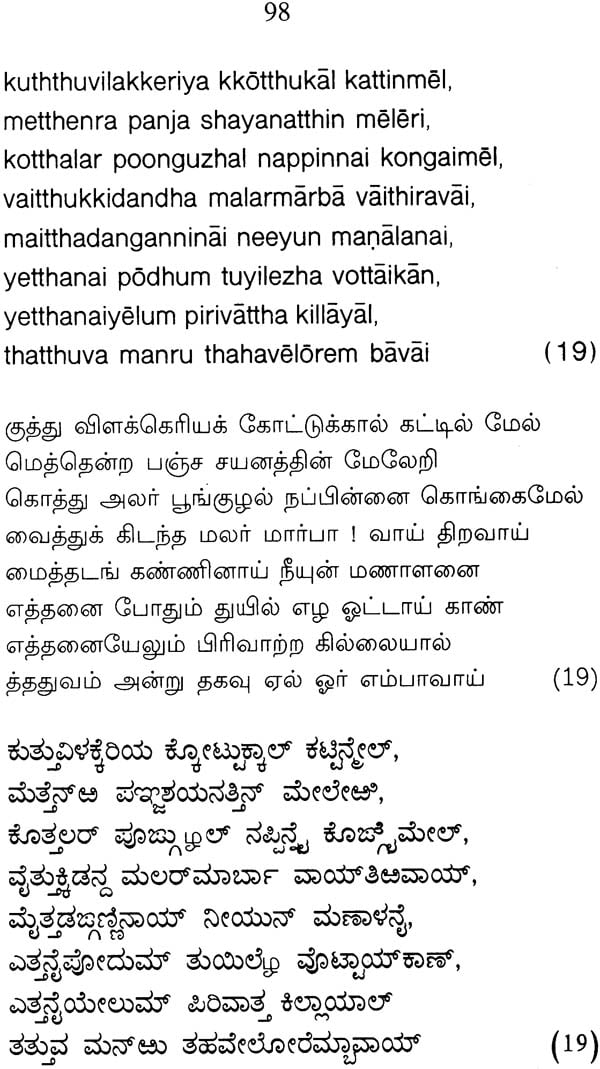 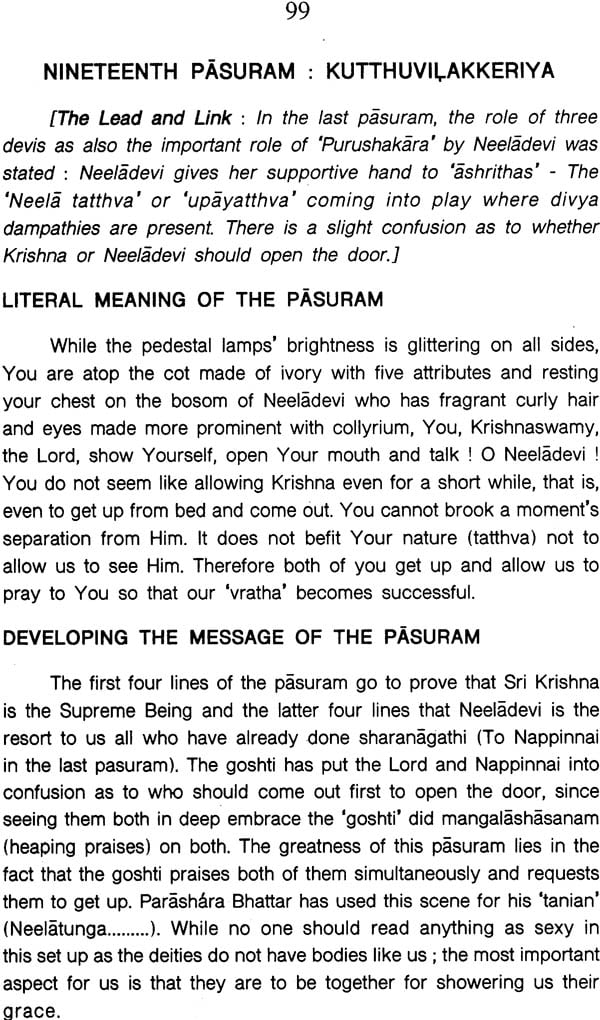 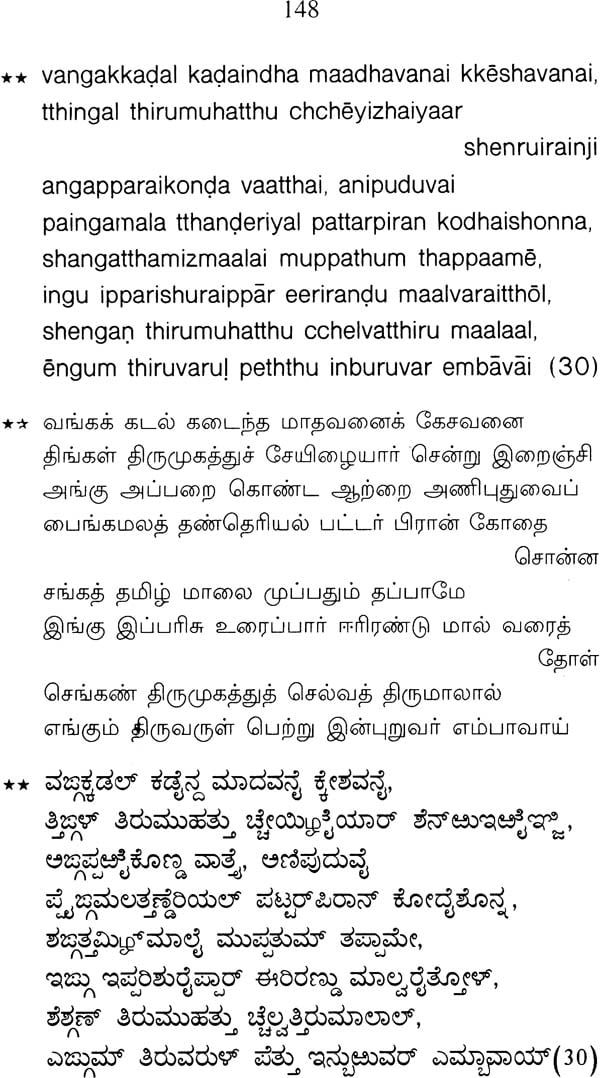 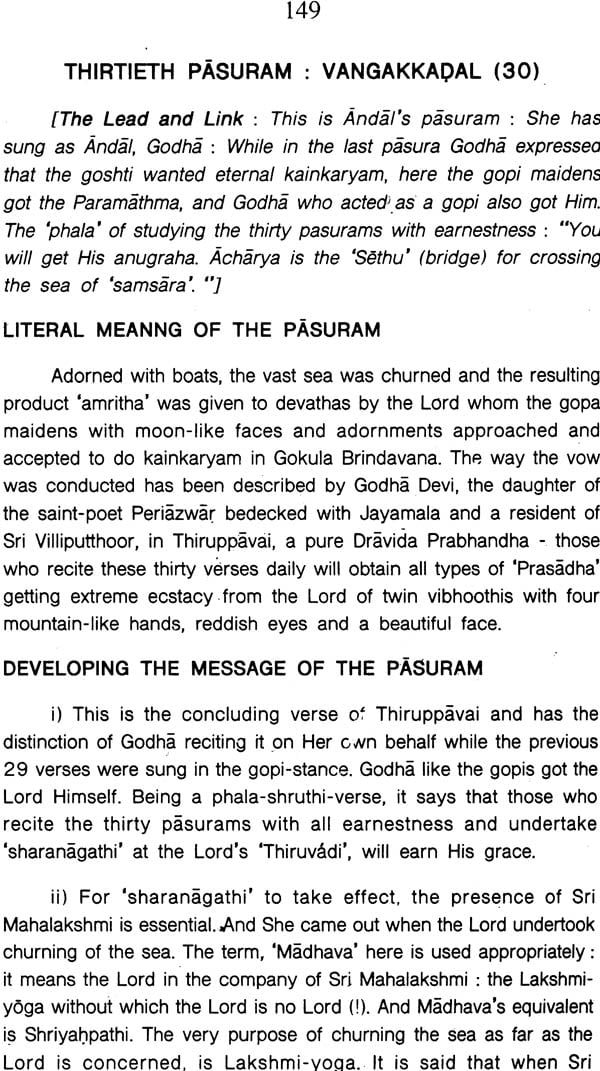 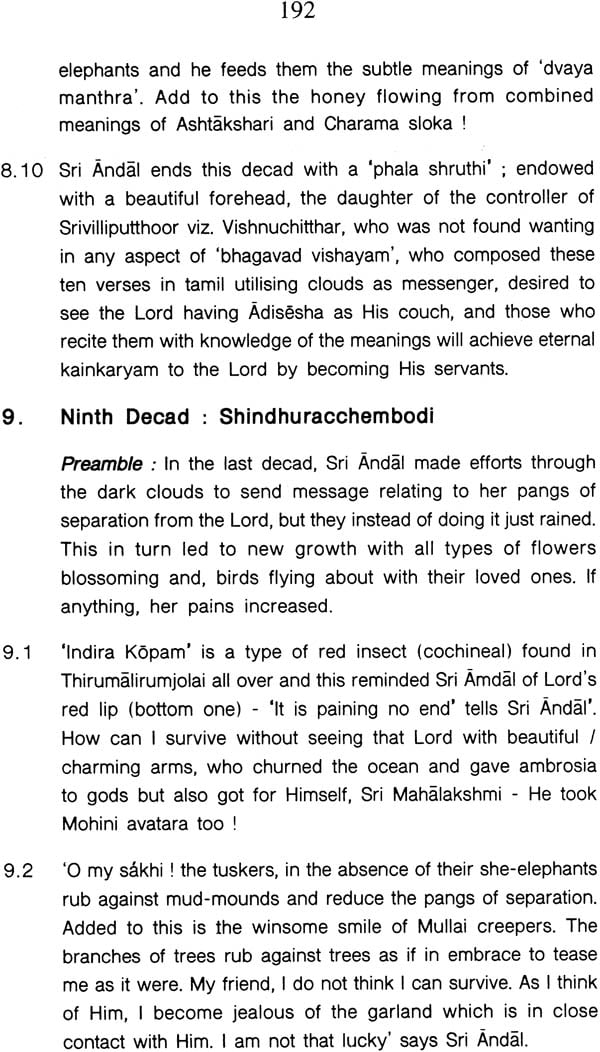 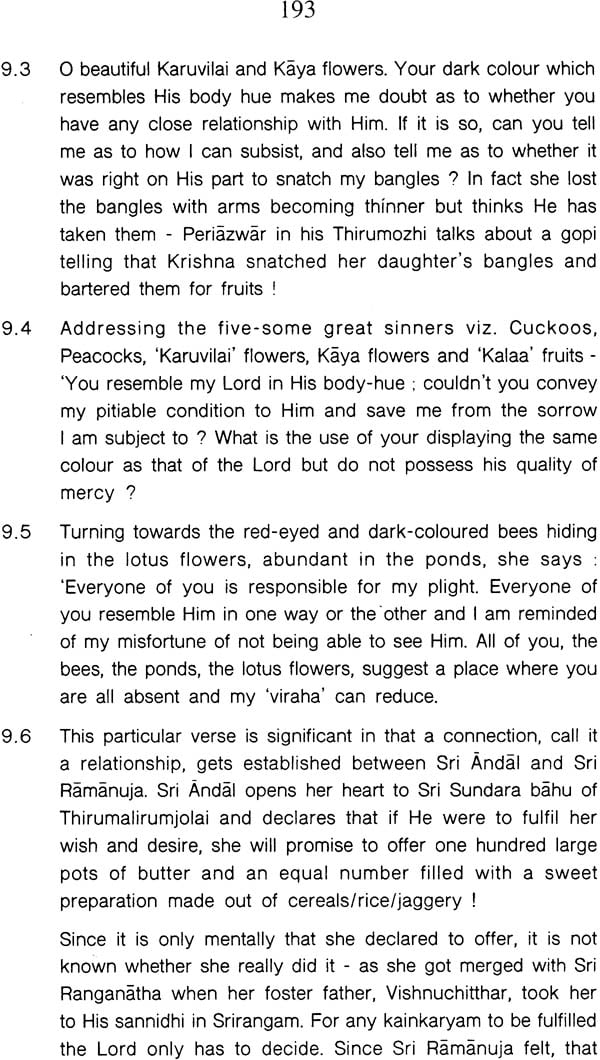 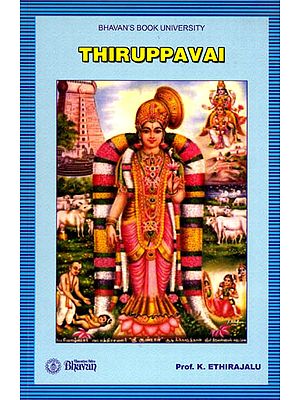 Alvar Saints and Their Celestial Songs: Some Glimpses
By N. Rajagopalan
$33
FREE Delivery 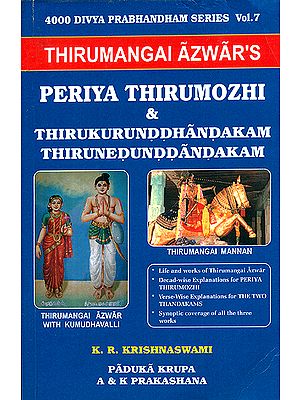 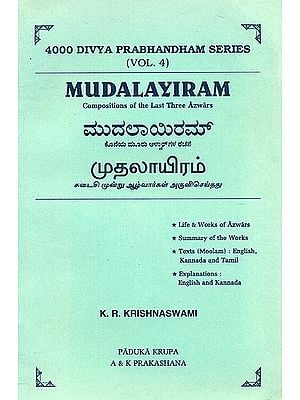 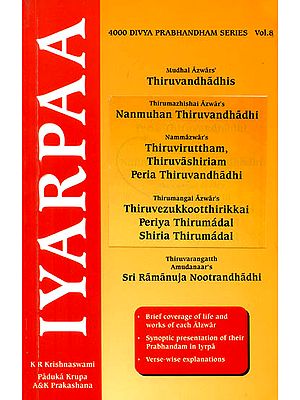