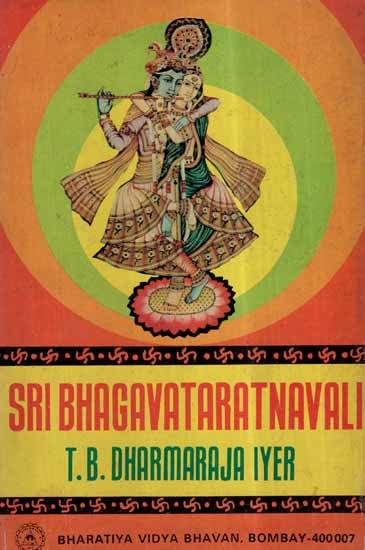 Born in, 1910 at Trichur, Kerala, Shri T. B. Dharmaraja Iyer graduated from Madras University in 1930.

While Shri Dharmaraja lyer makes no claims to scholarship, he has, out of devotion, composed a few poems in Sanskrit including Sri Krishnahridayam which was published. He developed great love for the Sanskrit language from his school days which actually drove him to the study of religious and puranic literature. Deeply devoted and religious, Shri Dharmaraja Iyer wanted to share his thoughts with his friends and colleagues and he has been conducting informal weekly discourses on religious topics, particularly Srimad Bhagavatam.

The book Bhagavataratnavali' is a collection of 108 verses selected from the 18,000 verses contained in `Srimad Bhagavatam'. To those who in the midst of the pressures of modern life cannot spare long hours to go through the voluminous original Text, this `Mini-Bhagavata' will be a boon, as the verses are selected with a view to developing bhakti, jnana and vairagya effectively.

Soon after a Bhagavata saptaha parayanam done by me some time back, it occurred to me to extract about one hundred and eight, verses from all over the purana and group them under appropriate heads to facilitate a summary Bhagavata parayanam daily.

Accordingly, a dozen titles were selected, not Skandha wise but representing the topics that came to my mind uppermost, - I dare not call them the most important - and nine slokas were allotted to each, making a total of 108 slokas in twelve series.

Selecting 108 verses out of 18,000 contained in the Text should not apparently be so difficult, but when the process started, the competition among the 18,000 to enter the 'Ring' was unimaginably tough. In fact, for every single 'stone' wanted, dozens and scores of 'diamonds,' `emeralds' and 'pearls' were freely offered by the Ratnakara'. Well, with sincere apologies to the spared gems, the selection was somehow completed.

It was originally intended for myself. The whole thing could be recited in a matter of minutes, every day, and more than once a day if I cared to. It appeared to help develop bhakti, jnana and vairagya more effectively and to give me greater satisfaction than the reading of three or four chapters from the Text in equal time. I say this with due respect to the chapters.

Soon my thoughts went to like-minded people. Why not extend the `Ashtottara' to them, too? In that case, I thought it might be better to append a rough English translation of the verses indicating their context as well.

As the verses under each head have been taken from different contexts in the Text the translation has been slightly varied here and there so as to suit their sequence. Care has been taken, however, to avoid any material distortion.

References to the verses selected have been given in a separate chart, Appendix I. Non-English words used in the booklet have been italicised. A glossary of such terms (not explained then and there) has been provided in Appendix II.

There is some overlapping of ideas and matter, especially under the heads 7, 8 and 9. As these constitute the quintessence of the entire Bhagavata, nay of all religion and philosophy, the little defect, if at all, may be justified. Similarly there is little difference in nature between the verses in the third and in the tenth series. It is all in praise of the Lord - Where there is no possibility of any excess or redundancy.

The childhood days of Sri Krishna and the unforgettable gopi episodes are conspicuous by their absence. Without inventing any justification for this we plead guilty. Let the omission help us to remember them with a vengeance!

Should this humble compilation serve in any measure to add to the joy or edification of Bhagavata lovers or to increase the tribe our labours will have been amply rewarded.

We take this opportunity sincerely to thank all those who have helped us in any manner in bringing out this Mini-Bhagavata. In particular, we are highly beholden to the revered Shri Swami Ranganathananda for gracing the Ratnavali with a fitting Foreword. Our special thanks are also due to the Bharatiya Vidya Bhavan for condescending to undertake the publication of such a small work and doing full justice to it, evincing due regard for the subject. We also wish to express our thanks to Nivedanam Prakashan, Surendra Nivas, Dadabhai Road, Vile Par (W), Bombay-400 056, for allowing us to reproduce on the cover the picture of "Radha-Krishna" which appeared on the cover of their Sri Venu Gitam published by the Bharatiya Vidya Bhavan. We can say only "Namo namah" to the great commentators and translators of Srimad Bhagavata whose works we have made free use of. For the Glossary we are indebted almost solely to the Sanskrit-English Dictionary by V. S. Apte of revered memory.

Many of the ancient holy books of our Hinduism are vast and varied in size and content, and inspiring and enjoyable to study and listen to. There are still some men and women among us who have, even in this busy industrial age of ours, the requisite leisure to enjoy reading them or hearing them expounded. But vast numbers of our people today, though deeply devoted to our religion and our holy books, feel unhappy at not having long hours to spare, in the midst of the pressures of modern life and work, for the study of these holy books. In response to their need, many abridged editions of these books, short and long, are now available in the market.

Among our holy books, the Srimad Bhagavatam holds a unique place of universal popularity and spiritual appeal. Its message of pure bhakti, reinforced by jnana, knowledge, and vairagya, renunciation of unrestrained sensuality, has a special relevance to arrest the current soul-killing materialistic wave in human society.

Shri Dharmaraja Iyer's Bhagavata Ratnavali is meant to serve this sacred purpose. His translation of its 108 selected verses into English vastly adds to the usefulness of the book. From the ever-increasing thirst of our people to read such books, which is evident today, we can visualise the possibility of the realisation, in the modern age, of the old prediction of the Bhagavata Mahatmyam:

`Then will set in, in every home and in every heart, the sport of that bhakti which, endowed with jnana and vairagya, is the carrier of the nectar of divine Love.'

Srimad Bhagavata, as is well known, is one of the eighteen puranas believed to have been composed by the sage Vyasa. `Bhagavata' literally means 'pertaining to or belonging to God, Godly'. In fact, all the puranas deal with God and are Godly. Why then, one might ask, is this one purana, which is said to have been composed after the other seventeen puranas, distinctly called `Bhagavata' while the others are called Brahma Purana, Vishnu Purana, Siva Purana, Skanda Purana, Padma Purana and so on. What is it about? What exactly is Bhagavata?

2. Sri Krishna Himself gives the answer. After fulfilling His life's mission He was preparing to leave this world - quietly. Uddhava, His chum and an ardent devotee, would not leave Him. He was asked to go to Badarivana and spend the rest of his life in prayers and penance. But knowing his Master's intentions and unable to bear the separation, he followed His footprints in search of Him, and there on the banks of the river Saraswati, found Him in His full splendour, seated all alone, preparatory to quitting. In that parting scene, Sri Krishna with His endearing smile and affectionate glances cheeringly tells His devout follower, "I am immensely pleased with your unflinching devotion. You have earned My grace in this life. I know your heart's desire. I shall now bestow on you what you earnestly seek. It is extremely difficult for others to attain. In the beginning, this was imparted by Me to Brahma, the Creator." Thus saying, Sri Krishna in one pithy phrase explains what is Bhagavata: "That Supreme Knowledge revealing My greatness and glory, which the sages call Bhagavata'."-(Skandha III, ch. 4, v.13)

3. Thus we see that Bhagavata' was first imparted by Bhagavan Himself to Brahma. Brahma in a suitable context narrated the gist of Bhagavata to His son Narada. At Narada's instance Sage Vyasa composed Srimad Bhagavata as a great purana dealing with the stories of Sri Hari and containing the very essence of all the Vedas and Itihasas and conveyed It to his son Suka. Sri Suka recited the Bhagavata before King Parikshit who had gone on a vow of fast unto death on the banks of the holy Ganga amidst several eminent sages. Suta, the puranic story-teller, was also present among the distinguished audience, and he in the traditional way gave the benefit of his hearing to the sages Sounaka and others in the sacred Naimisha forest. This is the Srimad Bhagavata which we have the good fortune to read and hear and enjoy without satiation. 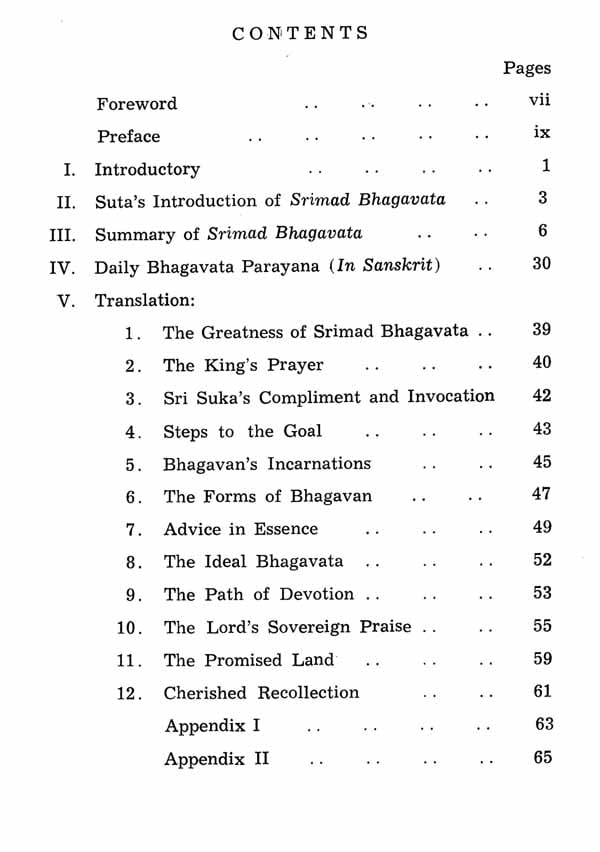 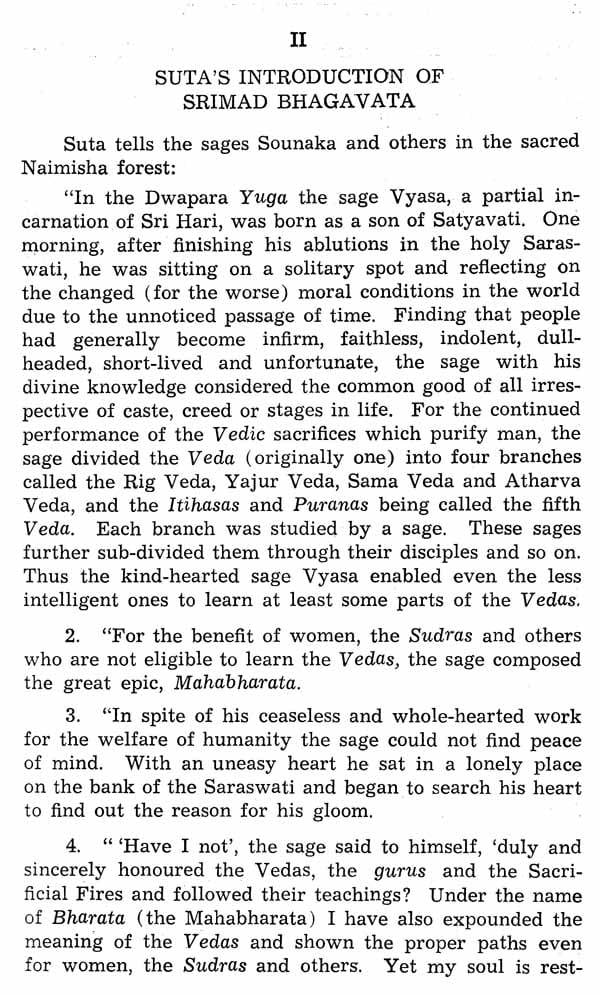 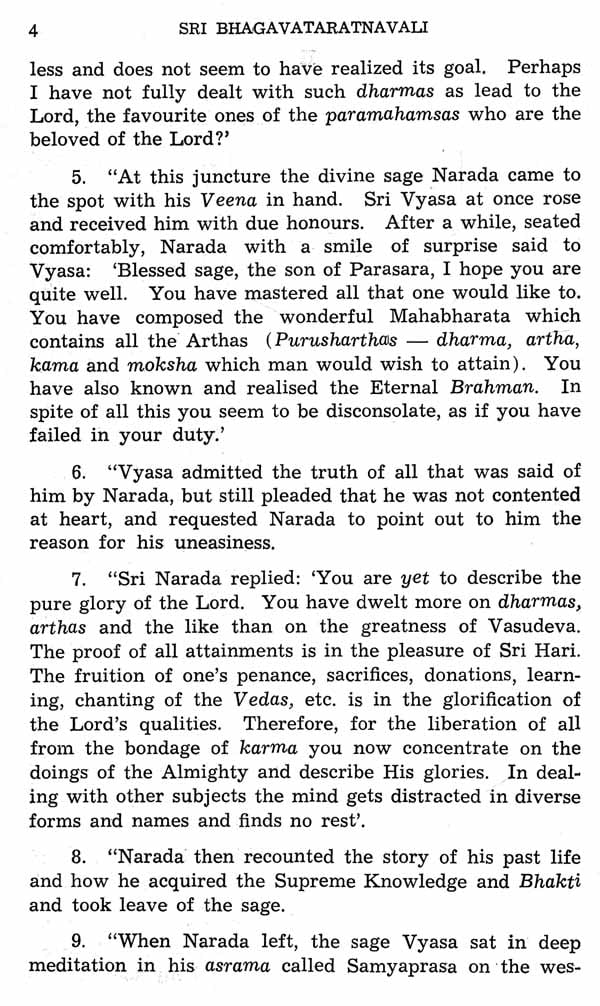 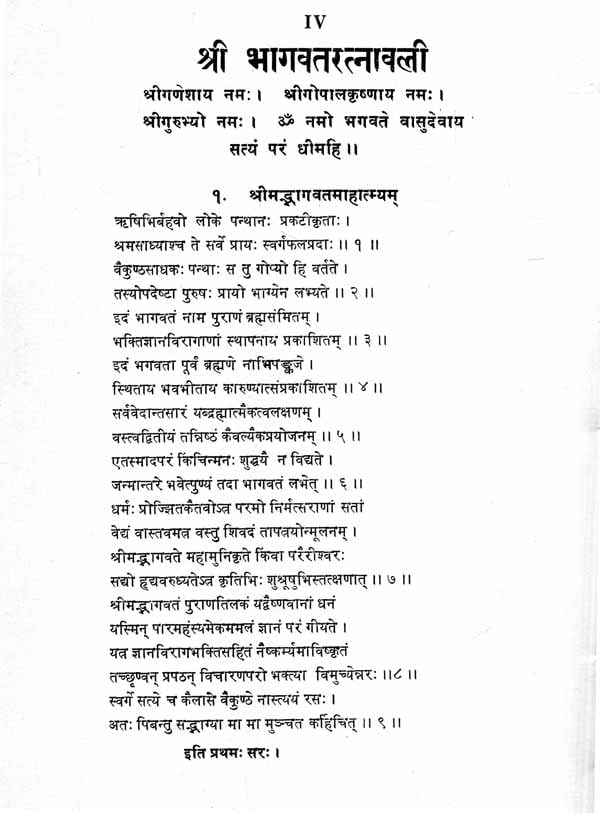 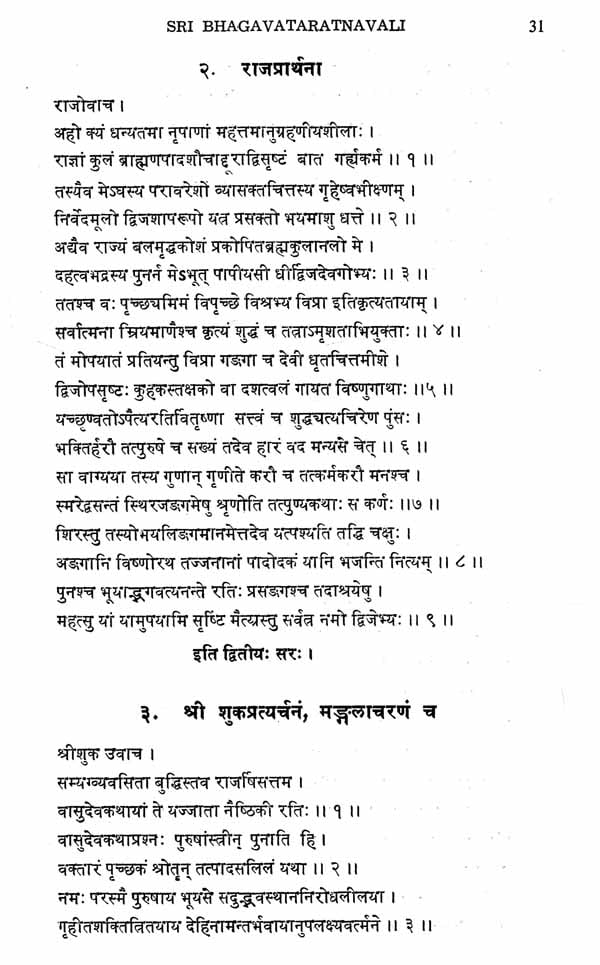 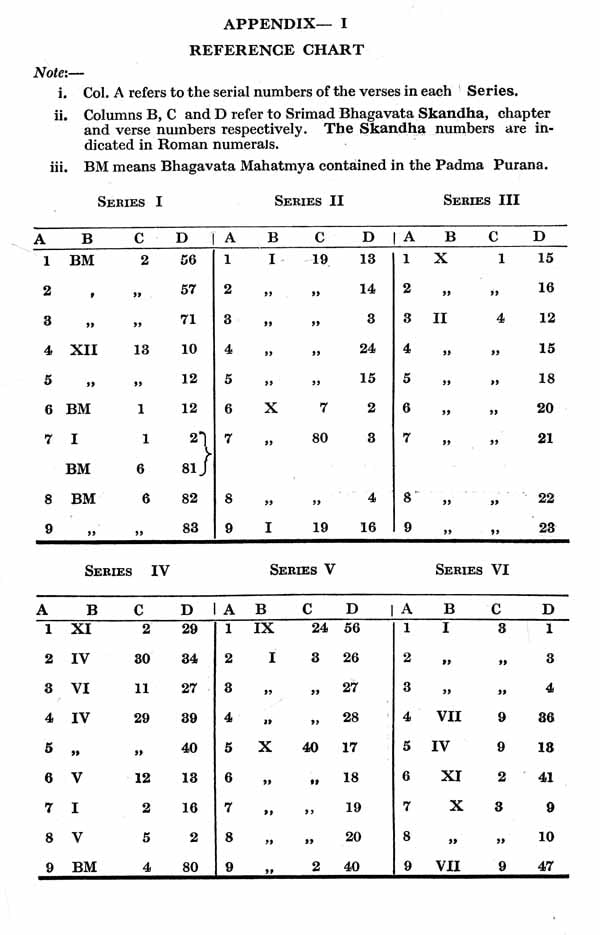 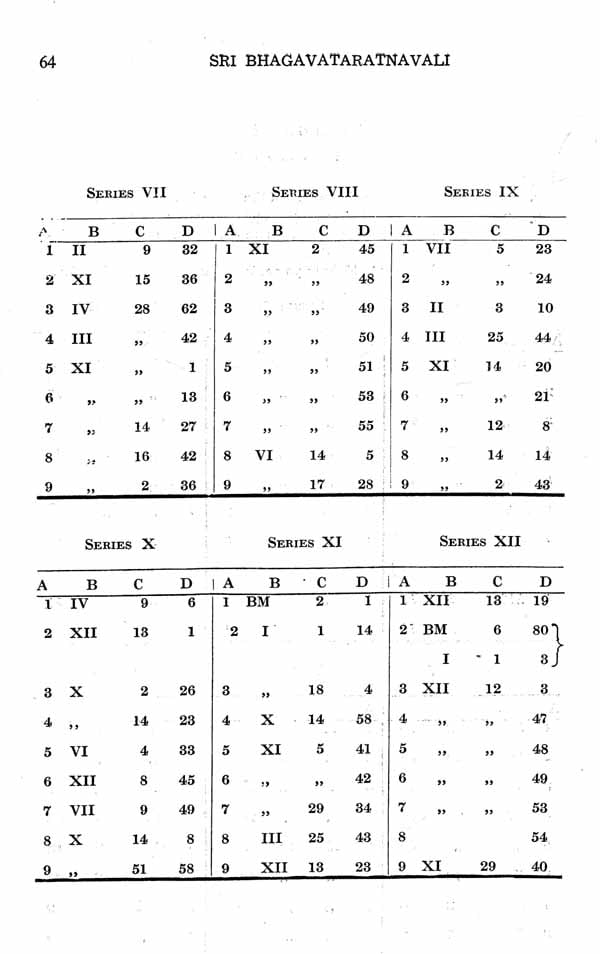 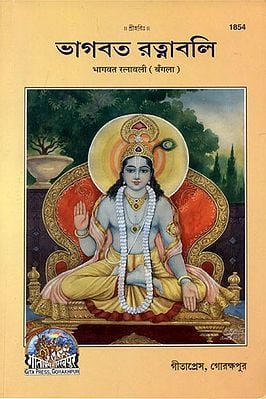 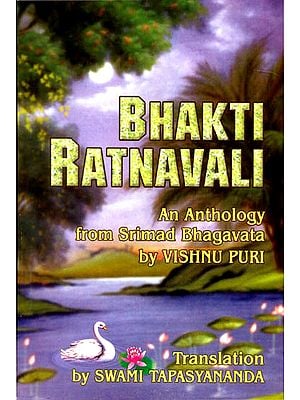 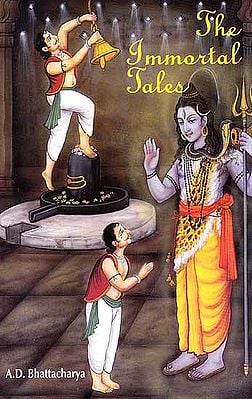