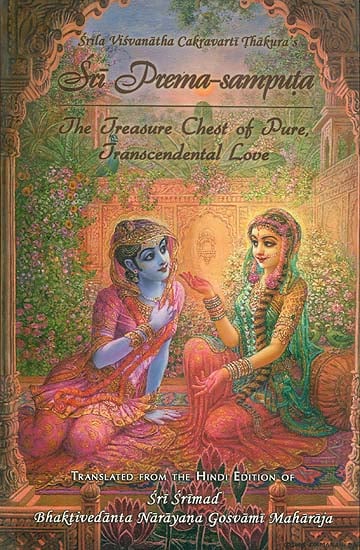 For centuries the writings of Srila Visvanatha Cakravarti Thakura have provided irreplaceable nourishment for Gaudiya vaisnavas on all levels of spiritual development. His life was an inspiration, as was his legacy: the literatures he composed to benefit generations of the Lord’s devotees. His compositions include prayers, songs and narrations of the pastimes of Sri Caitanya Mahaprabha and Sri Krsna; commentaries on texts such as Srimad-Bhagavatam, Bhagavad-gita and the writings of the six Gosvamis of Vrndavana; and detailed descriptions of both the science and practice of bhakti.

“ Samputa means ‘that place where precious jewels and other valuable stones are carefully hidden from the vision of people’. Srila Visvanatha Cakravarti Thakura has reealed the unnata-Ujjvala prema in Sri Radha’s heart, which is likened to a treasure chest, and protected it in a box in the form of this book. Therefore, the name of this book is Sri Prema-samputa.” (Srila Bhaktivedanta Narayana Gosvami maharaj) Sri Srimad Bhaktivedanta Narayana gosvami Maharaja appeared 1921in a devot Vaisanava family in Tivaripura, a village near the river Ganga, in Bihar, India. In 1946, he received initiation from his gurudeva, Sri srimad Bhakti Prajnana Kesava Gosvami Maharaja and his life of complete and exemplary dedication to Gaudiya Vaisnavavism or the path of krsna bhakti in the line of Sri caitanya Mahaprabhu, began. Five years later, he was awarded the renounced order of life.

Srila Narayana Gosvami Maharaja circled the globe more than thirty times, expounding Sri Caitanya Mahaprabhu’s message of pure, transcendental love. Simultaneously, he published books on the science of bhakti Hindi, English and other languages. On 29 December 2010 in Sri Puri-dhama he concluded his pastimes in this world.

This Sri Prema-samputa is a translation of his Hindi edition, which is a bhavanuvada, a translation incorporating the inner transcendental sentiments expressed in the Sanskrit verses.

The Life History of Srila Visvanatha Cakravarti Thakura Srila Visvanatha Cakravarti Thakura appeared in a family of brahmanas from the Radhiva community of the Nadiya district in West Bengal. He was celebrated by the name Hari-vallabha, and he had two older brothers, Ramabhadra and Raghunatha. During his childhood, he completed his study of grammar in Devagrama village. He then studied devotional scripture at the home of his spiritual master in the Saiyadabada village of the Mursidabad district. While living in Saiyadabada, he wrote Bhakti-rasamrta-sindhu-bindu, Ujjvala- nilamani-kirana and Bhagavatamyta-kana. Soon after, he renounced household life and went to Vrndavana, where he wrote many other books and commentaries.

Today I am most joyful to be able to present this Hindi edition of Sri Prema-samputa to the faithful reader. Srila Visvanatha Cakravarti Thakura, the highly exalted preceptor and crown jewel of Sri Gaudiva Vaisnava acaryas, has masterfully crafted this incomparable narrative poem in language that is simple, yet replete with deep meaning. Once, SrI Krsna, disguised in the attire of a heavenly damsel, came to Srimati Radhika and stood before Her completely silent. The sight of this incredibly beautiful celestial damsel filled Srlmatl Radhika with bliss and She became most eager to befriend Her. Srimati Radhika asked Her several questions, but the girl offered no reply.

Srimati Radhika thought the beautiful sakhi might not be well, and that this was the reason for the damsel not speaking to Her. Nonetheless, Radhika persisted in Her attempts to communicate with Her, and finally the maiden spoke. She said, "I heard of Your glories in the heavenly planets and have come to this Earth to meet You. When I arrived, I saw Sri Krsna's rasa-lila being performed at Vamsivata in Vrndavana. For some reason You left the dance to go into the forest, and Sri Krsna abandoned all the other gopis to follow You. After spending some time with You, He disappeared. When He also left You, You began to cry bitterly. I saw Your pitiful condition and became enraged with Sri Krsna. It is for this reason that I have now come to You." The disguised Sri Krsna then proceeded to describe Krsna's many faults.

The heavenly damsel said, "It is true that Sri Krsna has all good qualities, but He has one bad quality that destroys all the good ones. You, Sri Radha, have left everything - Your father, mother, brother, friends, husband, society, modesty and the orders of Your elders - all so that You can love Krsna. Yet He treats You so cruelly that He even abandons You and disappears. I cannot fathom this. In My opinion, You should not love Him, for if You do, Your future will be full of suffering."

These words prompted Srimati Radhika to explain to the damsel the very nature of prema. This explanation is the subject of Sri Prema-samputa.

Samputa means "that place where precious jewels and other valuable stones are carefully hidden from the vision of people". Srila Visvanatha Cakravarti Thakura has revealed the unnata-ujjvala prema in Sri Radha's heart, which is likened to a treasure chest, and protected it in a box in the form of this book. Therefore, the name of this book is Sri Prema-samputa. Sri Radha describes Her prema in the following two verses (Verses 108 and 109):

Sri Radha's body and Sri Krsna's body are separate, yet there is no difference in Their nature (svarupa). Sri Krsna is by nature blissful (ananda) and Sri Radha is by nature joyful (hladini). The truth according to the Vedas is that the potency (sakti) and the holder of potency (saktiman) are non-different: sakti-saktimatorabhedah. Although there is no difference between the personality (svarupa) and the personality's potency (sakti), when these transcendental pastimes are savoured, it becomes apparent that each has unique specialities and therefore, they differ in some ways. 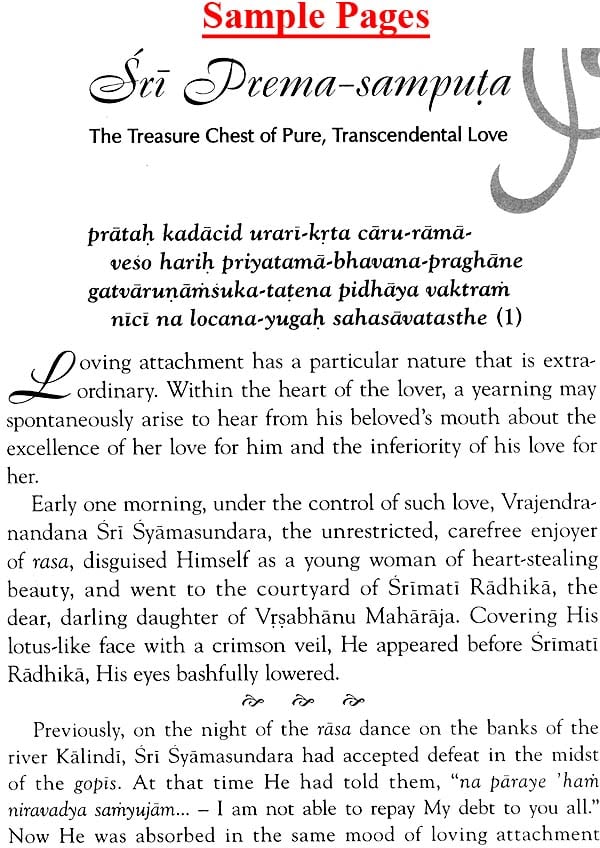 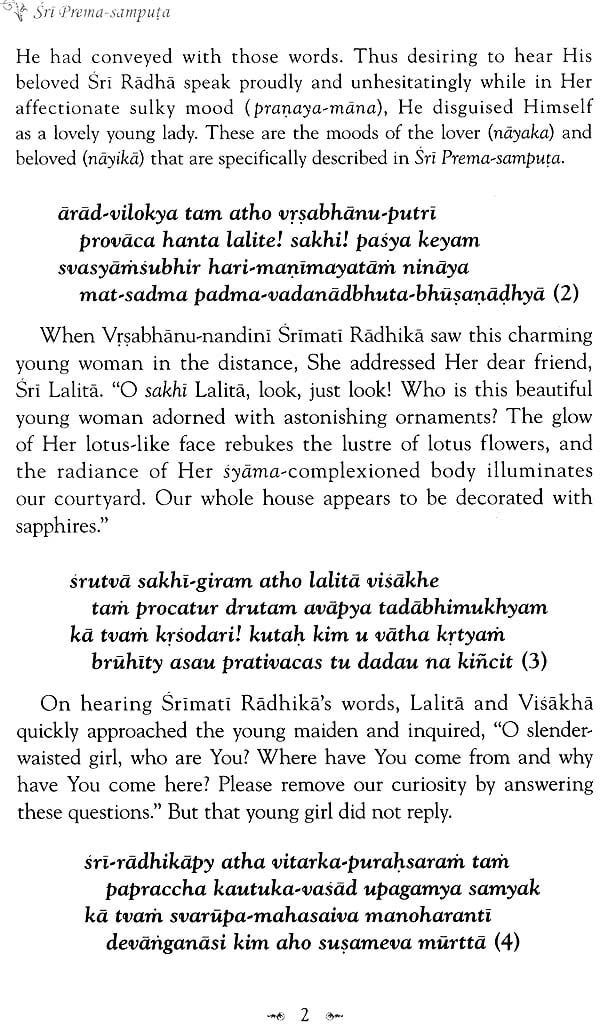 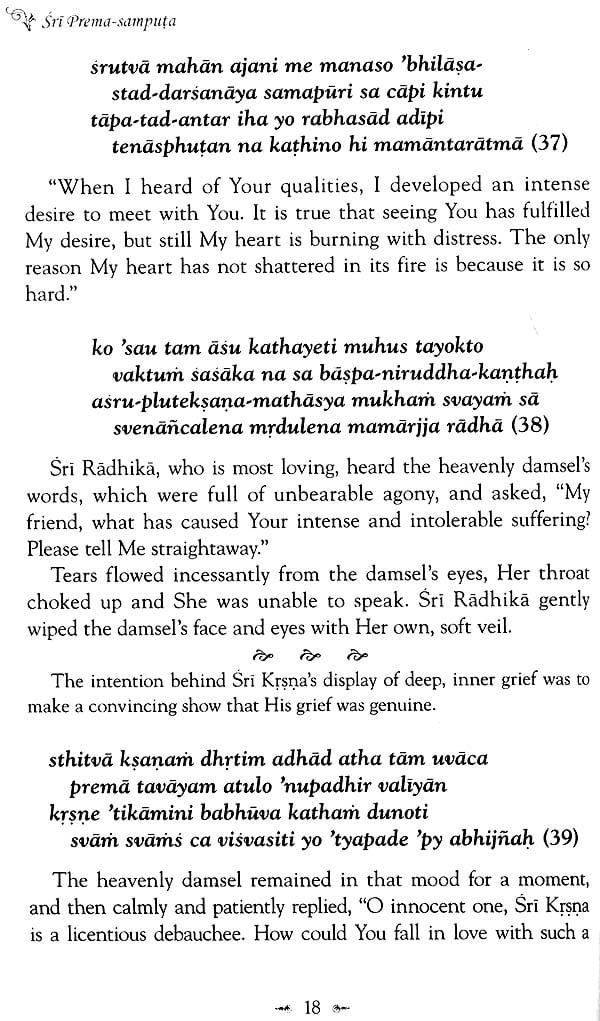 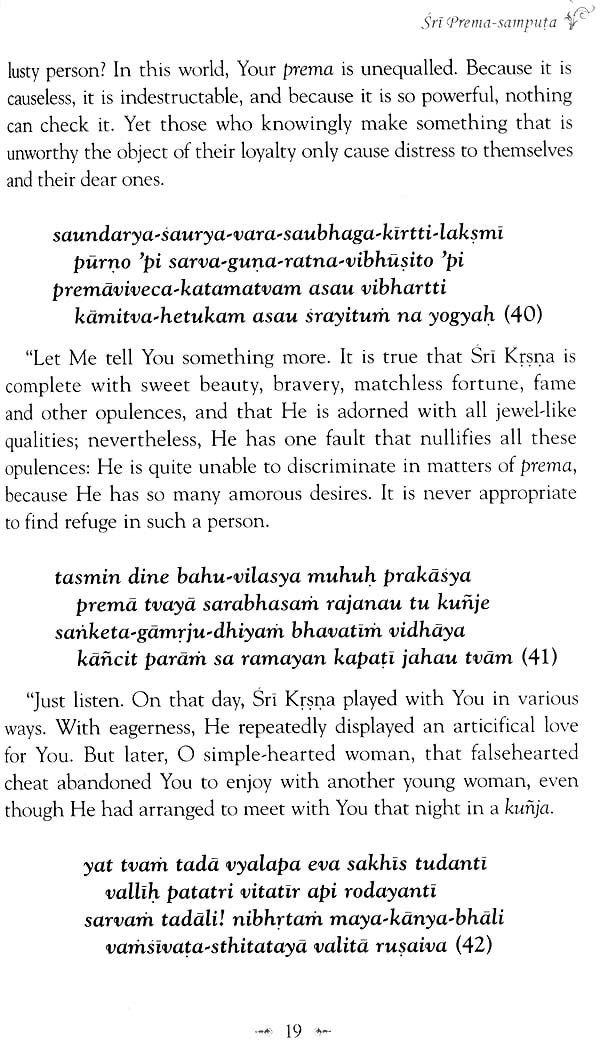 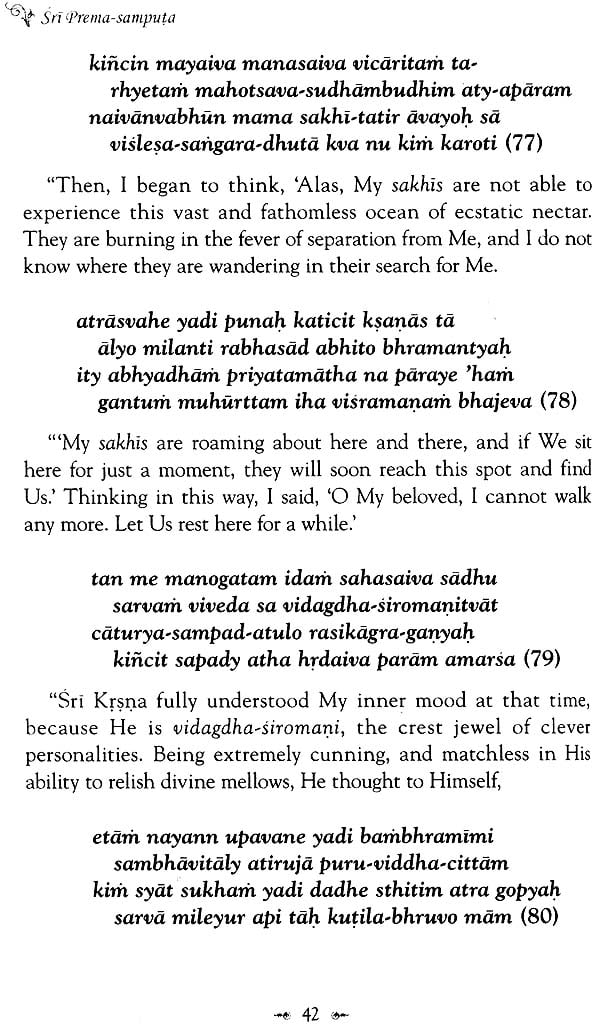 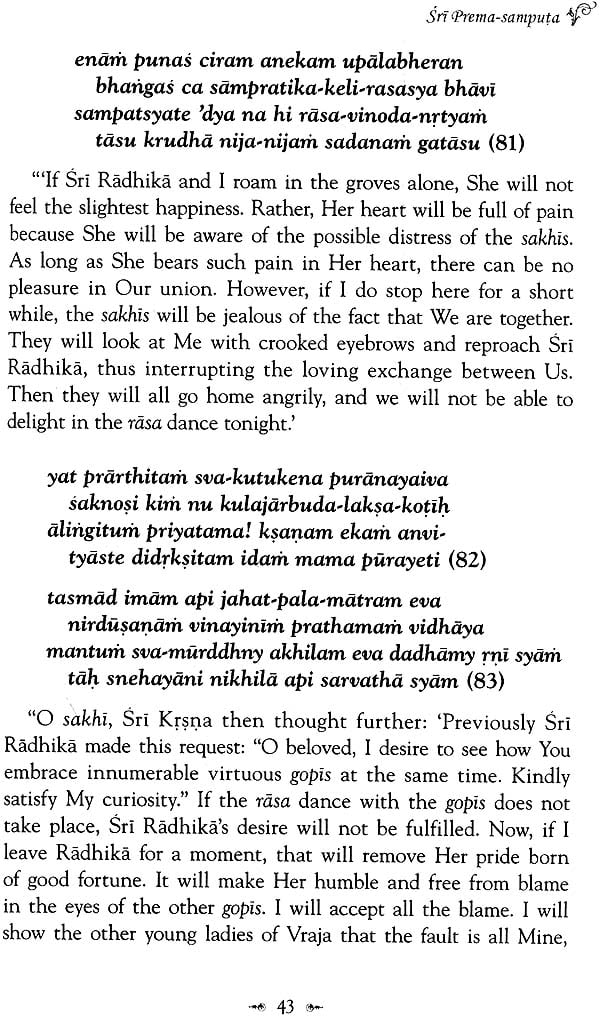