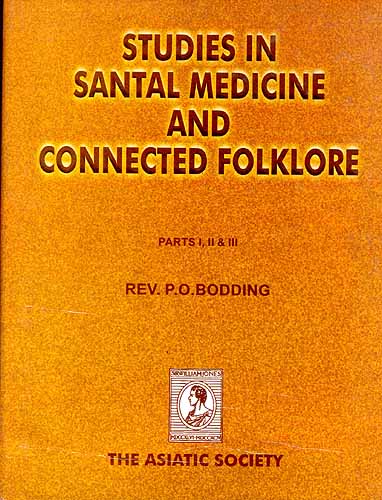 Rev. P. O. Bodding's 'Studies in Santal Medicine and Connected Folklore' was first published by the Asiatic Society in three parts between 1925 and 1940. It was republished in 1986. It is now out of print. The merit of this book lies in the fact that it has revealed the connection of Santal Folklore with the unique attitude of the Santals towards various diseases and their treatment. Santals embrace a belief that diseases are caused by malevolent powers who are to be satisfied and appeased through various attempts made by professional medicine-men, generally called Ojhas. Bodding has collected the folksongs current in the Santal Community, with the chanting of which the Santal-people try to pacify the spirits who are believed to be the originators of diseases. Bodding has thoroughly travelled the places inhabited by the Santals, learnt Santali language, gathered experience about the social and religious customs of the Santals and all these are reflected methodically in this book. It is amazing that a man from far off Norway had come to India and mixed himself closely with the people having a distant culture and home-bred language. Bodding's deep dedication to the study of the socio-religious fabric of the Santal people has resulted in the composition of this valuable book which the Asiatic Society took up for publication. Repeated demands of academicians from different corners have enthused us to publish the book for the third time. Some page have been recomposed to maintain the quality of production.

'Studies in Santal Medicine and connected Folklore' consists mainly of two parts, one treating of the medicines used by the Santals, their administration and application, and one called The Santals and Disease, dealing with the general attitude of the Santals when they have to face disease, their ideas as to the origin and causation of disease, their superstitions and fears, their various attempts to appease and satisfy the malevolent powers supposed to be responsible for disease, the professional medicine-men, especially the ojha and his do, ings, his magic and religious endeavours; it is further told, how they act when disease is thought to have become a matter of public concern. In an appendix is described, how a Santal becomes an ojha; a description is given of the annual village-course in ojha, science and of various matters connected with this; a number of songs used when this course is finished off are recorded; specimens of the ojha's mantars and jharnis are also given. The table of contents will show what is found in this paper and its appendices.

There is one matter to which I should like to draw attention here. It has been touched on in the paper itself in several places and is of interest, as it may possibly contribute to' wards showing, how certain religious ideas may change, especially how people belonging to the stage of development found amongst the Santals may adopt and transform the beliefs and practices of others. My remarks, which shall not be many, concern the attitude of the Santals towards the spirits, bonga, as they are called (the Supreme Being, differently styled and sometimes called the bonga. of the bongas, being here always left out of consideration). The ordinary Santal attitude is shortly as follows. They believe in the existence of a large number of bongas, all more or less malevolent, often immoral and downright bad. They worship these bongas, that is to say, they offer sacrifices to them; they do so, not because they love them or respect them or expect anything good from them, but because they fear them. The sacrifices are a kind of tribute, or payment, to ensure the non' interfer- ence of these spirits with the Santals, with their health and their substance.

Any grown, up male Santal may perform a sacrifice, provided he knows the 'ritual,' i.e., the manner of proceeding, the invocation (bakher; as it is called), the kind of sacrificial animal required and the name of the b onga, and provided he dares to act. No sid is necessary. To perform sacrifices for the community they have in every village two priests; for the annual hunt, they also have a special priest. No sid or initiation is necessary to become such a priest; they are really chosen by the community and appointed. In the case of the hunt-priest (dihri), they make sure that he has the requisite knowledge, and in the case of one of the village priests (the ato naeke, the village priest, but not in the case of the kudam naeke whose special work is to worship the spirits, supposed to reside on the village borders, and some others) the priest is formally 'chosen' by the bangas themselves. The village people, in the case of a vacancy, go to the holy grove and call on the bangas, whereupon a man is 'possessed' (rum, see p. 34) by one of the spirits, and in this state goes and embraces one of those present, and in this way selects a priest. It is not called sid; the bangas are in this way supposed to show by whom they will be pleased to be served.

There is no special course of training to be enabled to worship, it is free to everyone who wants, and knows, so far as all private worship is concerned, apart from the public func- tions referred to.

They do not use any mantars, only invocations (bakher) .
. With the ojha the attitude seems to be considerably different. His work is confined to a particular sphere, and due allowance must be made for this.
He has to go through a course of training, and after having passed a couple of prelimi- nary ceremonies, he has to receive a formal initiation or sid.

Whilst the ordinary Santal stands in fear of his baigas, the ojha does not show fear, whatever he may feel. So far as one can see, it would be contrary to his profession and work to fear those whose assistance he engages. His constant 'association' with his bongas may breed familiarity. The specimens of ojha-invocations quoted speak for themselves. There is no reverence in the ojha's way of addressing his bongas; he tries to use one bongo against another, appealing to the knowledge and grace of his tutelary bongas, more especially the first and original ojha-guru, now a banga.

On the whole the ojha acts as one familiar with the bongas, and as one able to enlist the use of the power of certain bongas. This is obviously foreign to the Santal mind. The ojha is in supposed communication with a large number of bongas and spirits not generally known to the Santal, anyhow not invoked by the ordinary Santal. The nature of his bongas does not seem to be much different from that of the ordinary Santa] ones. Hindu ideas have, however, influenced the ojha mind to some extent, especially when the greater Hindu deities are referred to. But it is not the holiness or righteousness of the bongas that are thought of (even if such qualities should be found); it is the power of the bongas to which they appeal, and which they try to secure for their purpose. They will appeal to the bonga's trustworthiness, and threaten or cajole them to be honest in their transaction with the ojha.

There are two special matters that should be mentioned, the mantar and the saket, peculiar to the ojha.

It has in the paper all along been taken as a matter of course, that the ojha has origi- nally received his 'science' from Hindu sources, and there does not seem to be any reason- able doubt as to this. Now a faultlessly recited mantra is supposed to have power over the gods; the one who knows and is able to recite faultlessly a mantra is supposed to be able to obtain his object.

Santali mantar is the same word as mantra, and with the word the thing itself has been borrowed; but I am under the impression that the Santal ojha's use of his mantars is different from what was stated above. It is naturally necessary, that the oiha knows the appropriate mantar ; but it does not seem necessary that the wording and the recitation of the mantar should be faultless or according to Some acknow- ledged formula. What is considered essential seems to be a knowledge of, and the proper use of the names of the appropriate bongas and some matters connected with the disease in question. Anyone knowing the Santals will here recognize a peculiar trait of theirs, their need of having to do with concrete realities.

Further, there does not seem to be any thought of a bonga being compelled to do the bidding of an ojna by his uttering a mantar alone. It rather seems to be that the ojho. stands in a particular relation to the bongas concerned and, by the mantar and special means, is able to enlist the assistance of these, provided the inducement is sufficient. It is a remodelling of foreign tenets to suit Santal concep- tions.

The ojha is generally exhorted to make sure the saket .To the Santal, saket means a sacrifice vowed to a bonga by an ojha, to be performed when the patient recovers. It is also used as an adjective, meaning the particular bonga to whom the ojha makes such a vow, and whose assistance the ojha is supposed to secure. These saket bongas are many and different, invoked according to the predilec- tion and faith of the ojha (see p. 64). The saket consequently is the power behind the scene, known to and engaged by the ojha, supposed to be available on certain conditions, the ojho's spiritual power. That the appeal is ineffective does not cause any difficulty; it is easy to find a plausible explanation.

P. O. Bodding is a name to conjure with. He was a missionary with a difference. It was he who rescued from oblivion the hidden treasure buried among the Santals in Bengal and Bihar over long centuries. The Dictionary of the Santal language that he compiled is a monument of dedication, scholarship and dogged perseverance. Coming from far off Norway, he lived and mixed with the Santal folk of our country as no foreigner had ever done before him. What is most surprising is that he became an authority on Santal language and society and even Santal medicine. Between 1925 and 1940 the fruits of his studies in Santal Medicine and Folklore were published by the Asiatic Society in three instalments that soon went out of print. We pay our homage to this great friend and lover of India by re-publishing the three parts of his well-known work in a single volume. Hope this book will be adored by scholars as well as general readers. 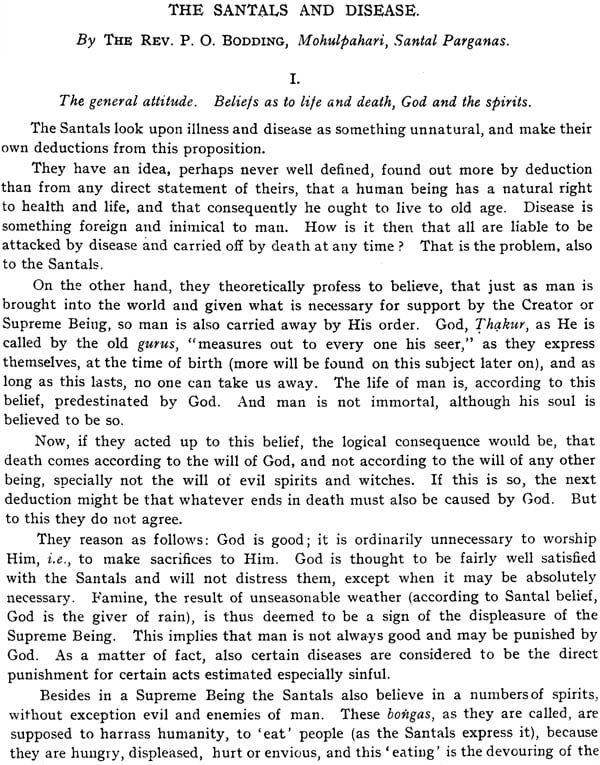 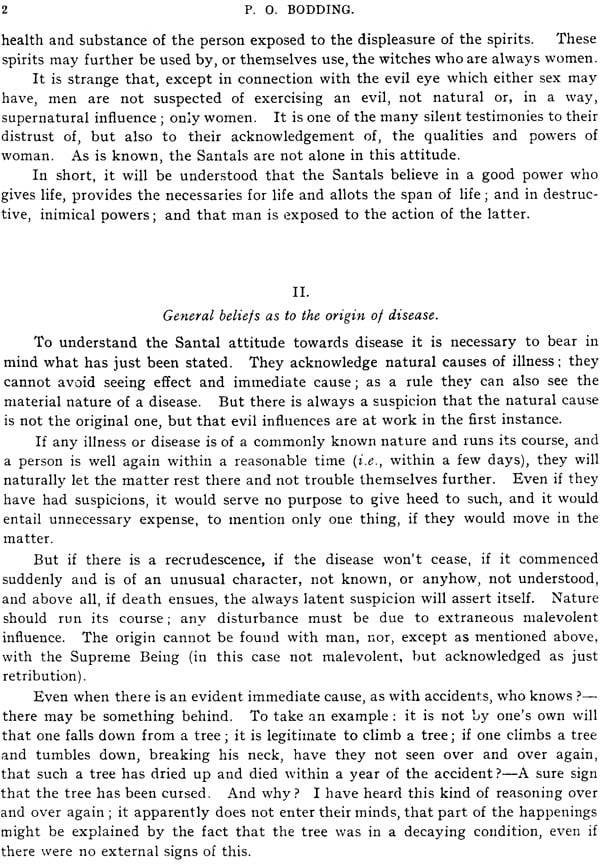 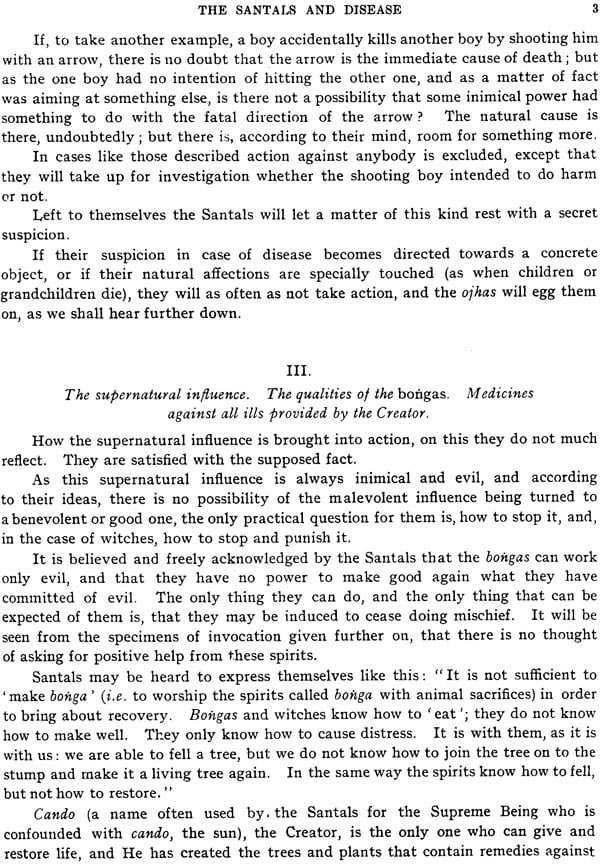 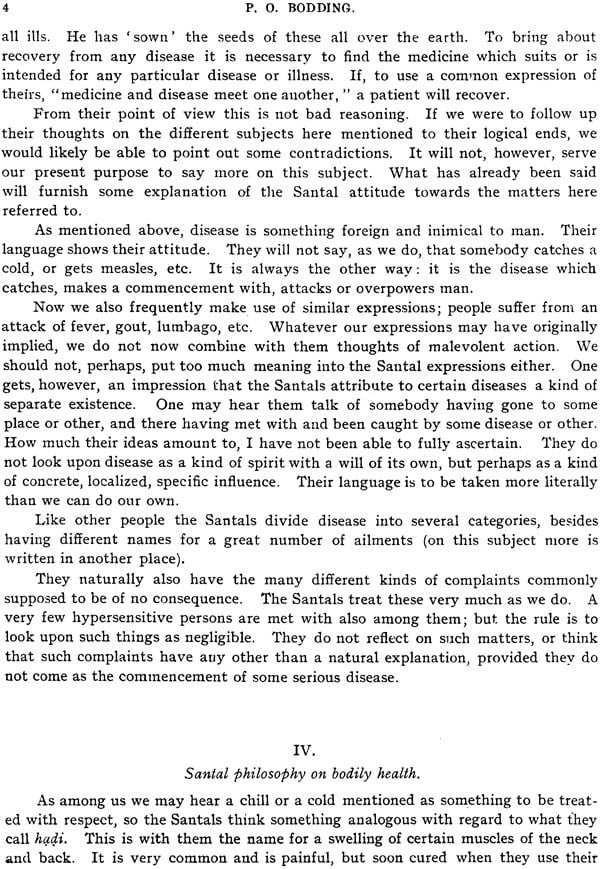 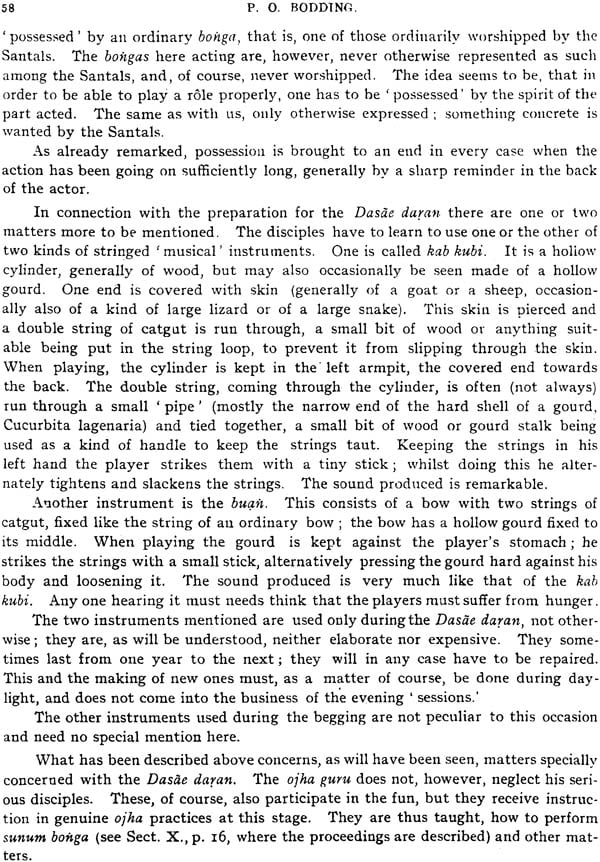 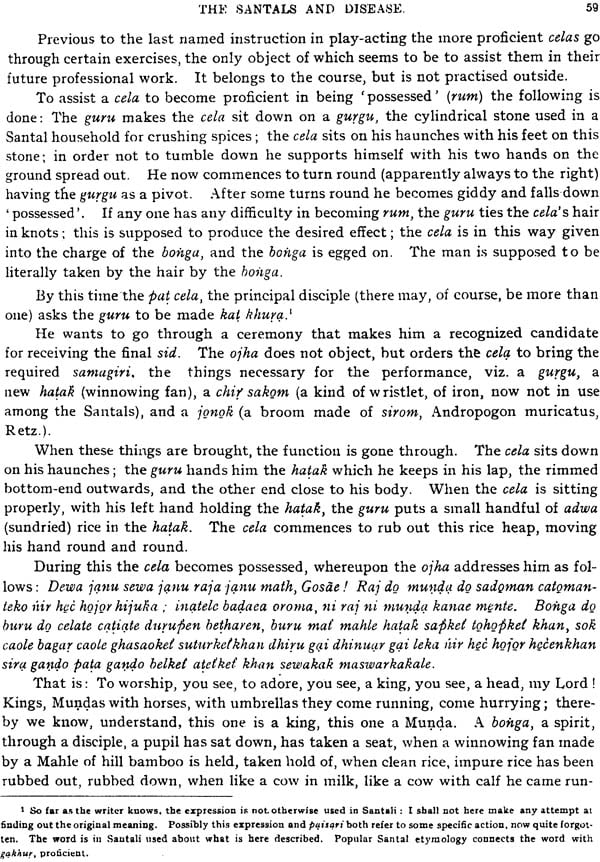 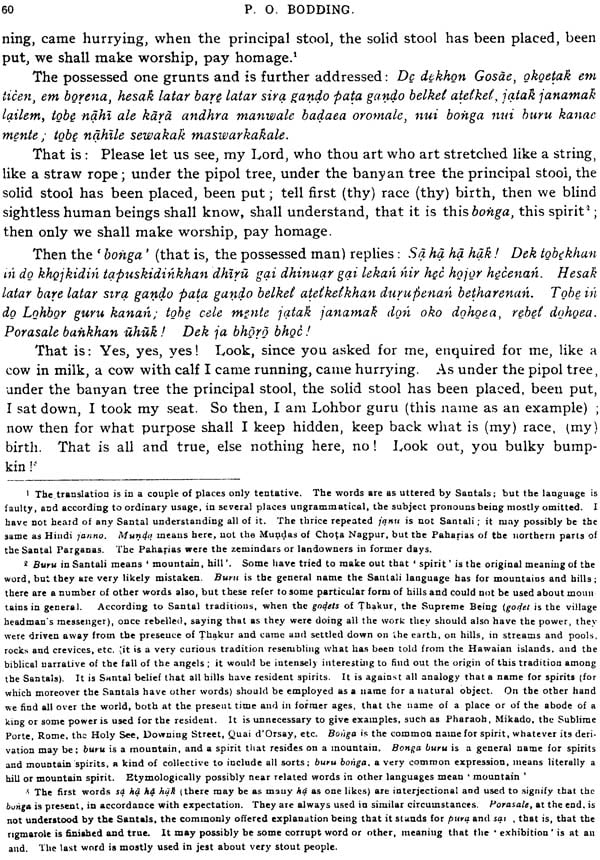 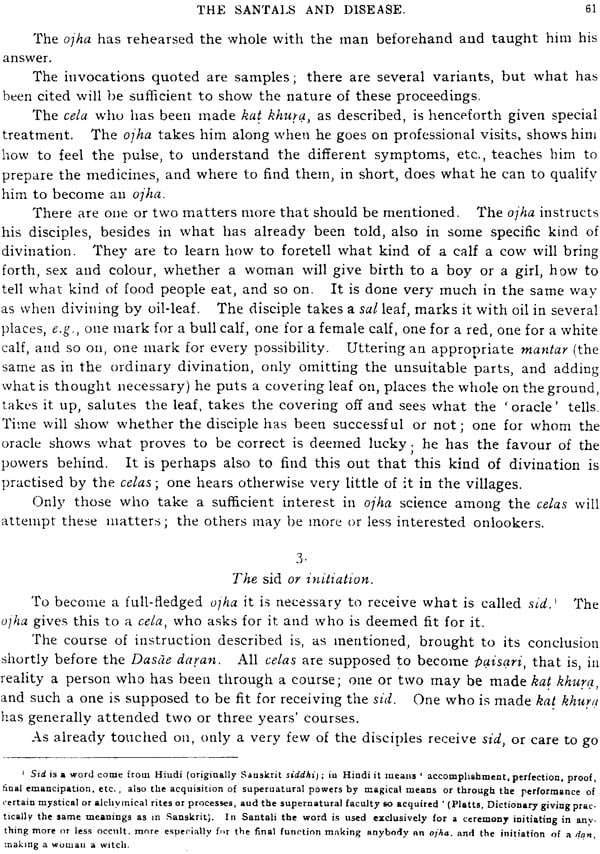 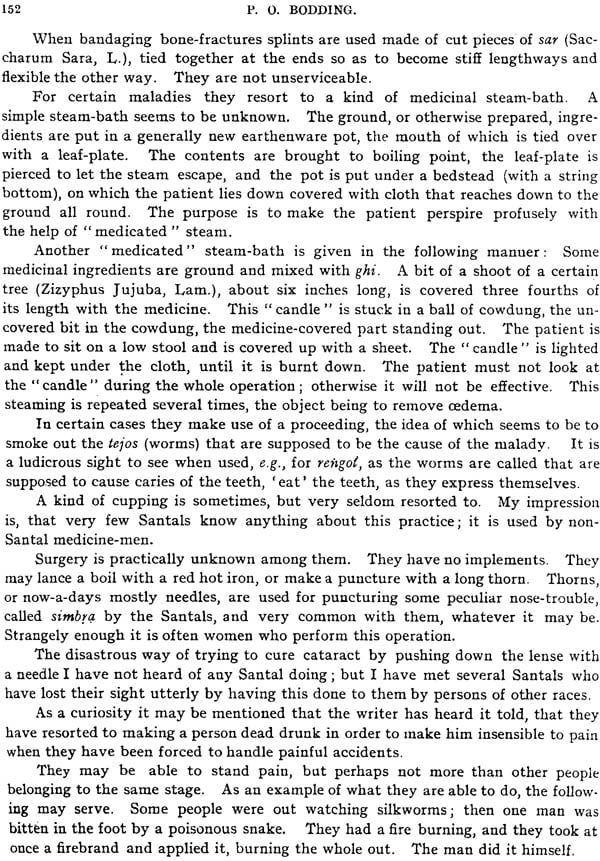 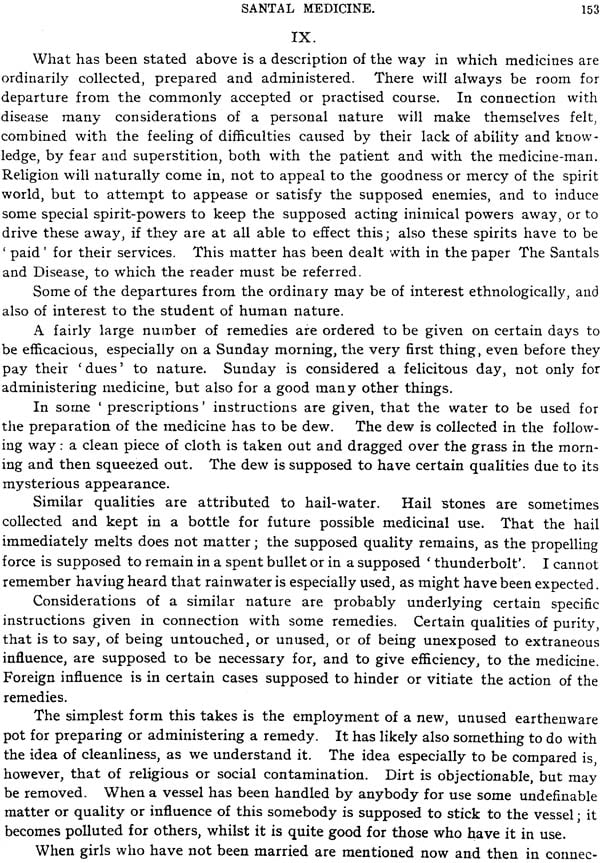 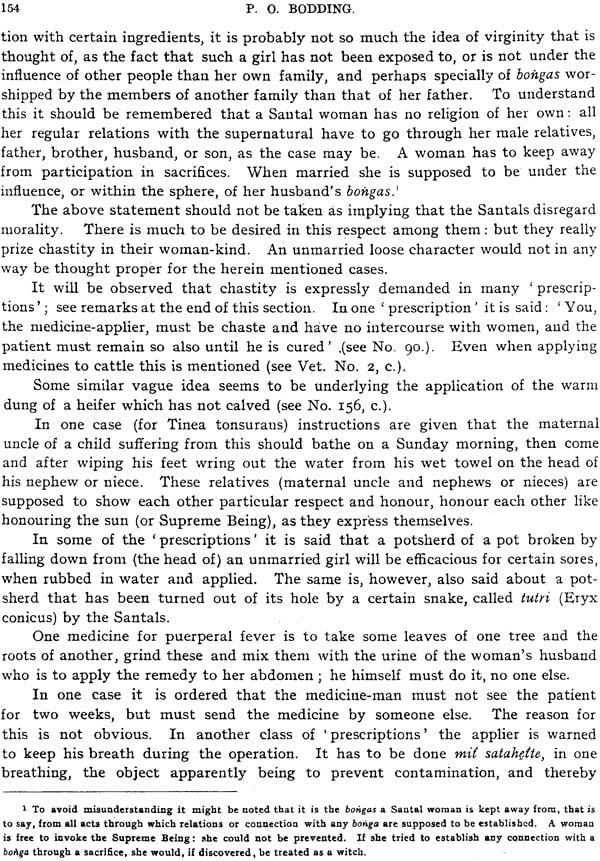 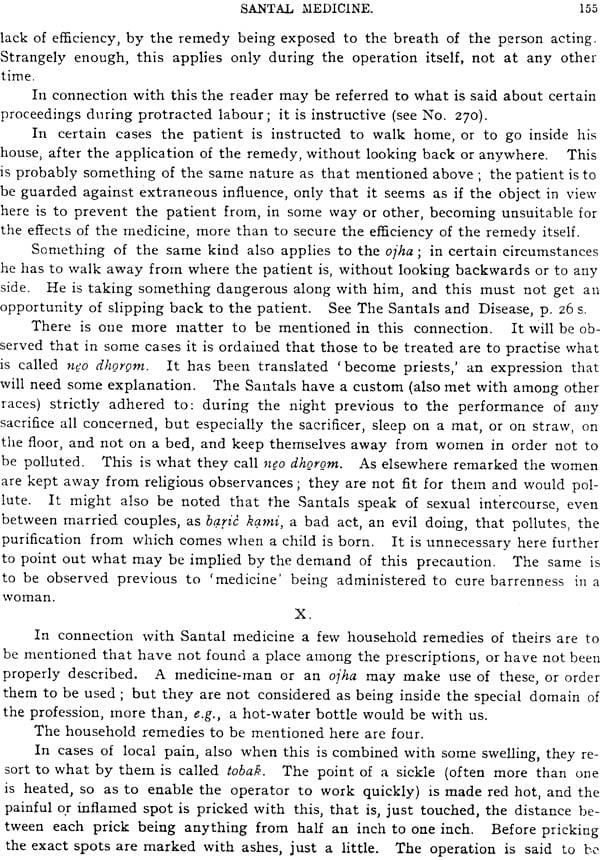 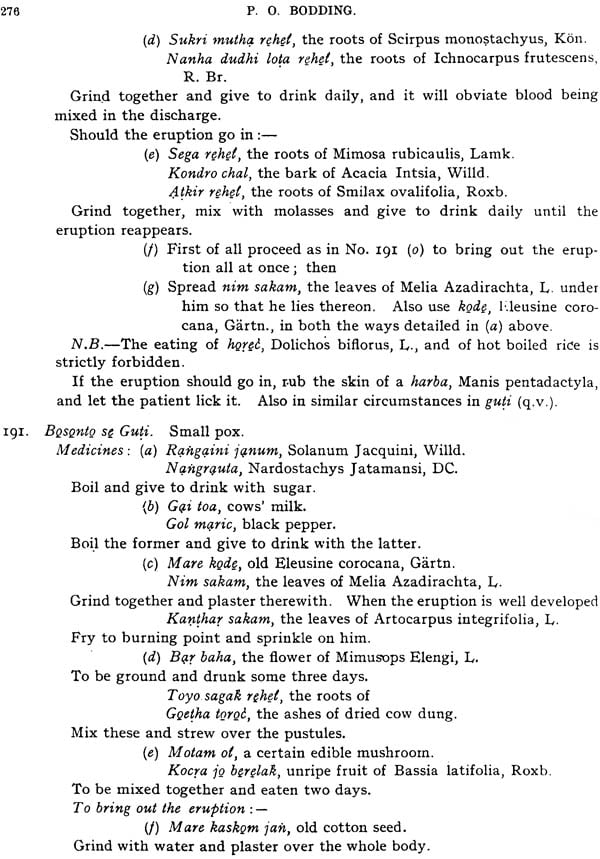 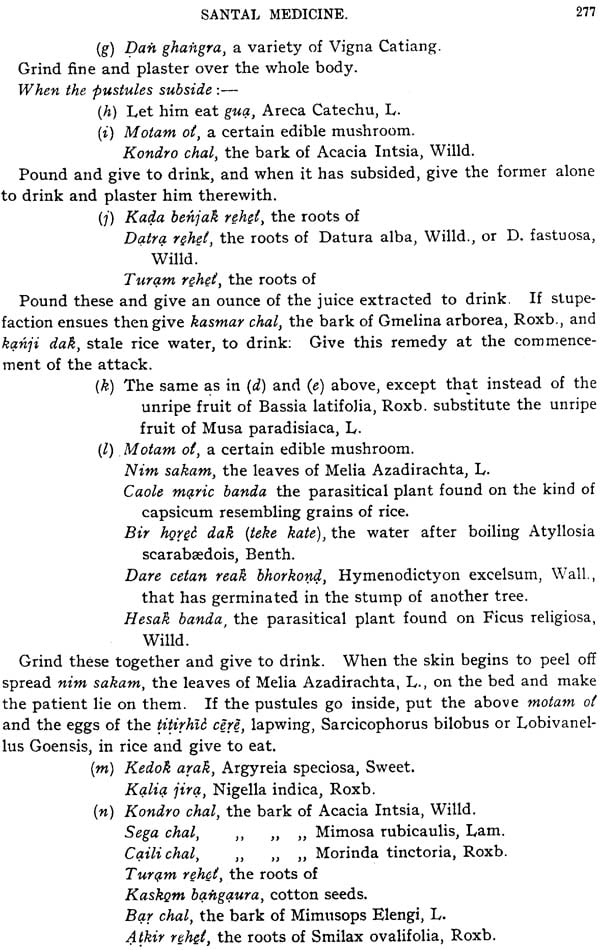 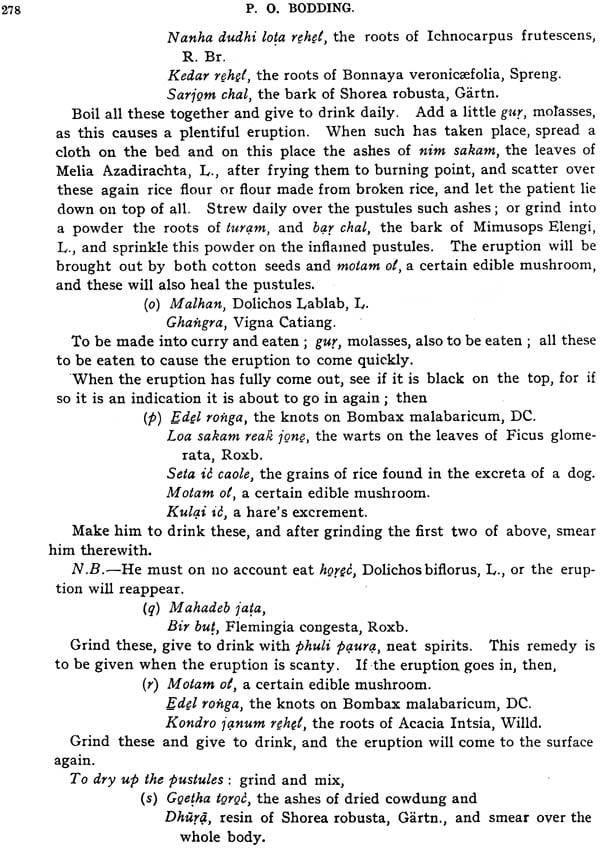 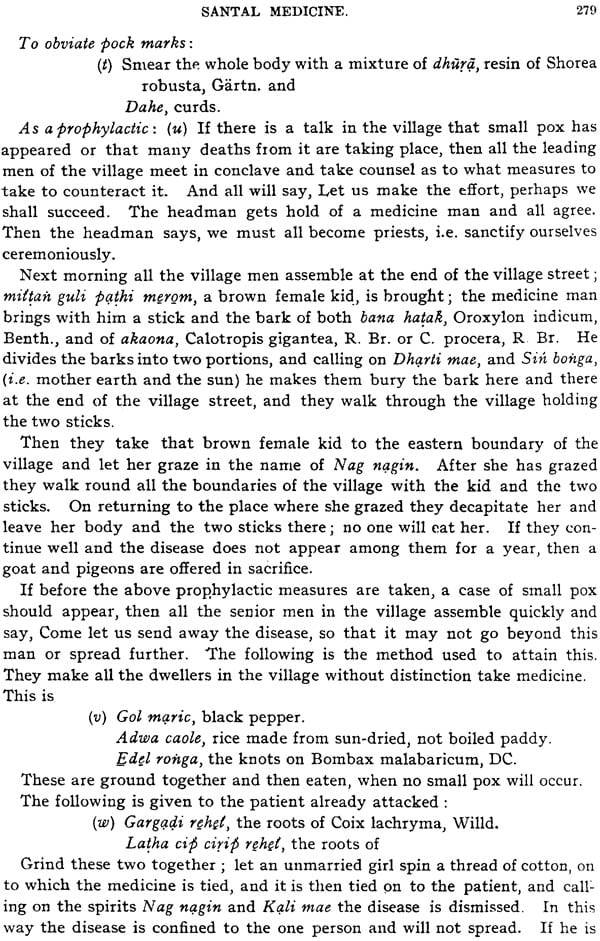 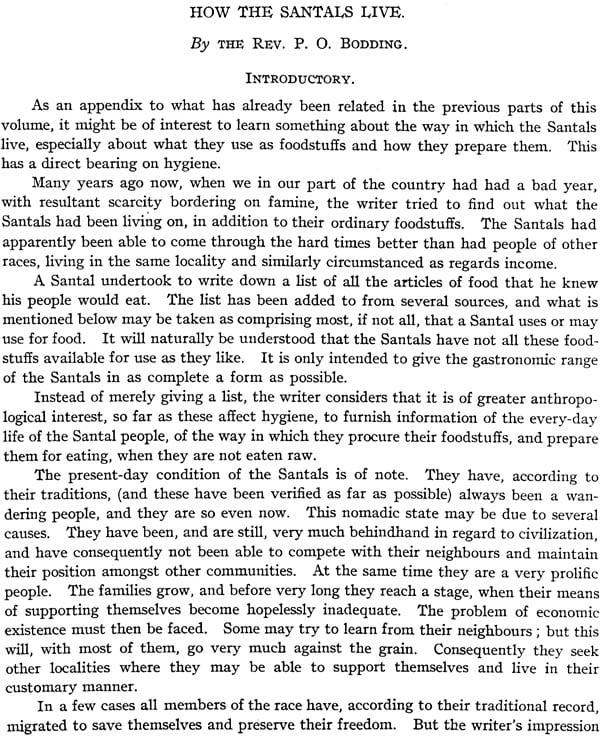 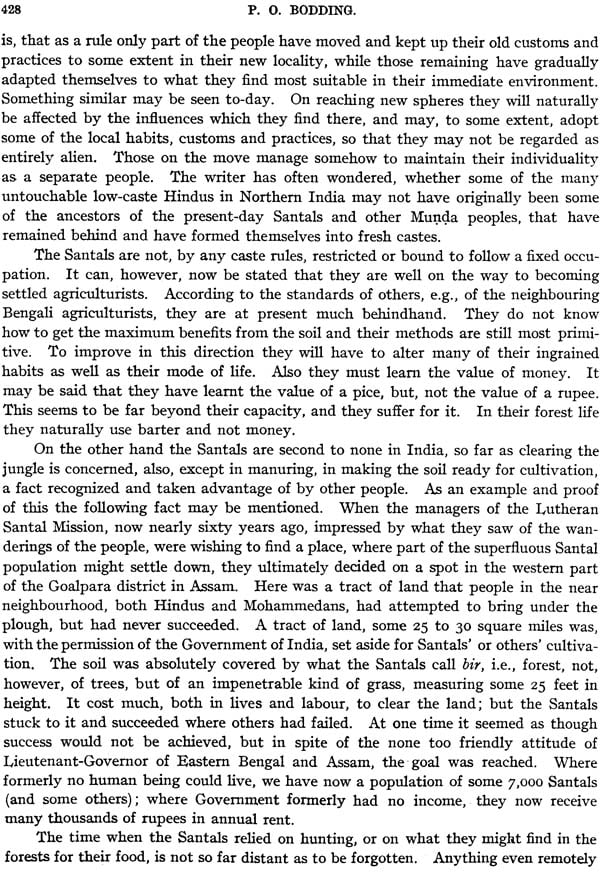 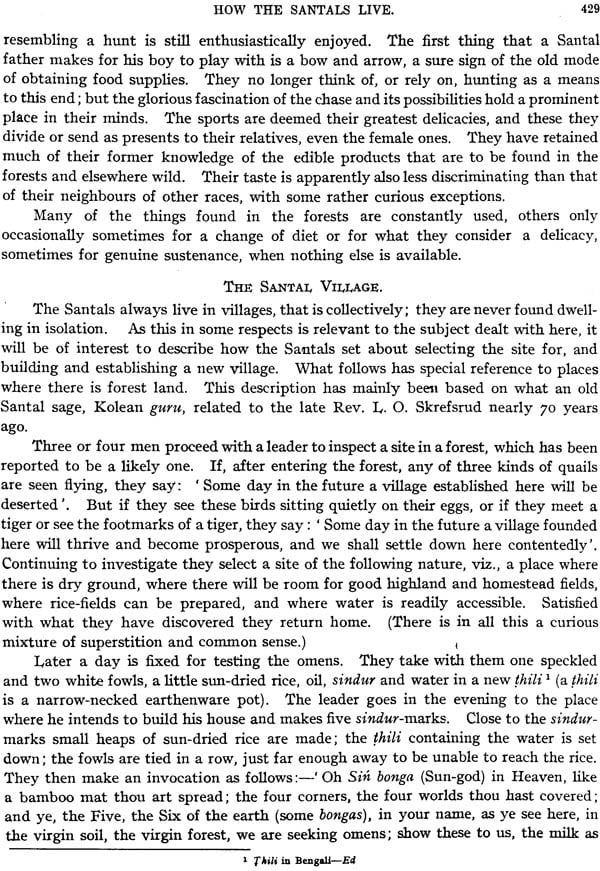 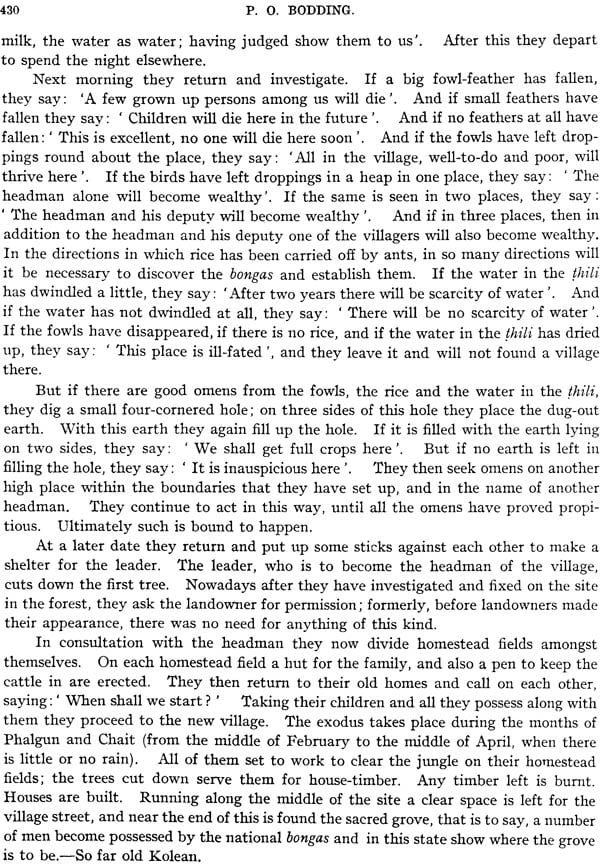 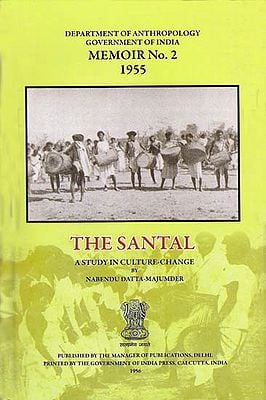