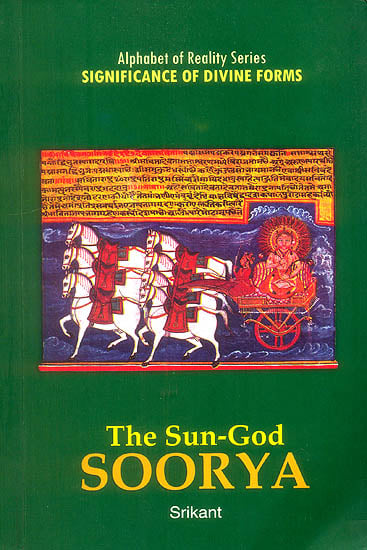 Related to Sun-worship, which has been a universal religion, there evolved in India a profound wealth of philosophical knowledge about the deeper dimensions of man and his relation with the Cosmic Reality. The book reveals a world of symbology and spiritual insights.

The forms of Gods are books of profound spiritual wisdom. The knowledge derived from enquiry after Truth from various angles are condensed in them. To those who seek, they reveal their inner significance.

The series Alphabet of Reality is a search for such knowledge involved in the divine forms. Our first book in this series investigates into the various form of Sri Ganesha, the spiritual power invoked at the beginning of every auspicious function. The warm welcome the book received, is an inspiration for publishing more books of its nature.

There prevail some misconceptions about the divine forms, largely because of an inadequate understanding of India's spiritual vision evolved through the enquiries of many eminent explorers of Truth. Some people compare the form of gods with their usual concept of the human figure, and consider such forms with several heads, hands and so on to be the result of immature imagination. They conclude that they are meaningless figments of superstition dating to primitive ages. This is very much like the misconception one ignorantly entertains about the significance of highly meaningful mathematical symbols, taking them to be mere scribbling from a child's scratchpad.

According to Vedantic perception, the most evolved spiritual philosophy of India, a Deity is a facet of Brahman, the one Supreme Reality with potential for infinite expressions. Man is one of these expressions, and he is placed by Nature in an evolutionary stage that can take a leap forward to embrace the supreme unconditioned divinity of Brahman. Man's pursuit of knowledge of the deeper facts about himself and his relation with Nature begins at different psychological levels subject to individual variations. A leap from the lower to the superior levels often need the help of appropriate spring-boards. The concept and worship of Deities function as such spring-boards from which one can surpass certain conditioning patterns of mind and evolve to a higher spiritual level represented by a Deity.

The form of a Deity is conceived in such a way that it surpasses the human form in several respects to symbolize figuratively higher spiritual potentials. Every aspect of such a form embodies certain philosophical and spiritual principles, which an inquirer can discover. When the mind is oriented to such forms, with thoughts directed towards the higher spiritual truths represented by them, the subtle power of Brahman latent in consciousness are invoked facilitating the communion of the conditioned mind with the spiritual dimensions represented by the forms, and this brings insight, guidance, solace and a sense of freedom. The divine forms are a symbolic language evolved by the Rishi-s to help us have subtle communication with our greater Self. The active divine aspect of the Deity expands the consciousness of the earnest seeker to the realization that in his unconditioned level of Being, he is unborn, infinite and unconditioned Freedom that transcends all forms.

The sun, scientists tell us, is the primary energy source of our planet and governs all the material laws, and influences whatever exists in the world. The seers of India discovered that the Sun is also an embodiment of higher spiritual laws, the eternally relevant divine principles involved in the evolution of the universe, and the sourc of the emergence of life and the inspirer of gradual evolutionary unfoldment of consciousness, which, in man, can shed its conditioning limitations to embrace the pristine freedom of Brahman. And the whole phenomenon is viewed by Vedanta as the Leela, the grand play of Reality.

As mentioned in the first book in the series, this effort to probe into the deeper meaning of divine forms is neither to confine the concepts within an intellectual frame, nor to explain the ancient insights, limiting them within the bounds of present-day scientific knowledge and vocabulary, but to use the emerging philosophical vision of modern thought as a pointer to the transcendental dimensions of existence, discovered by India's ancient Rishi-s. 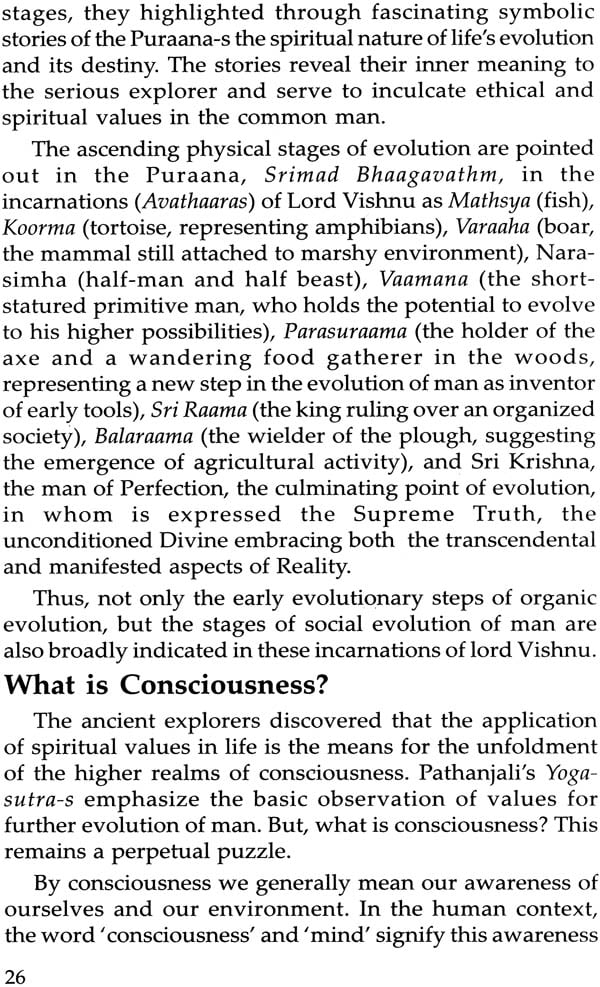 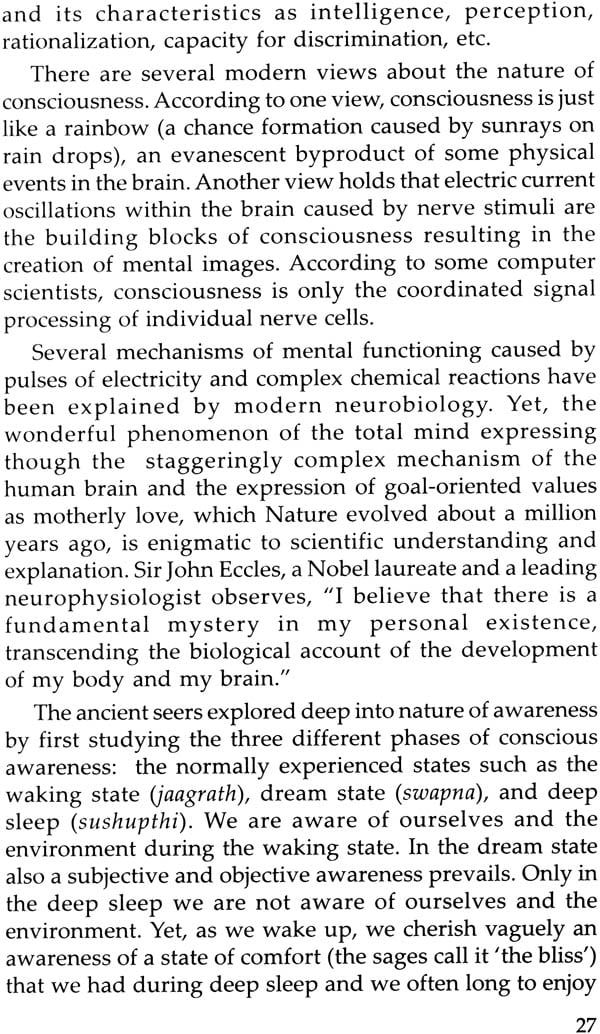 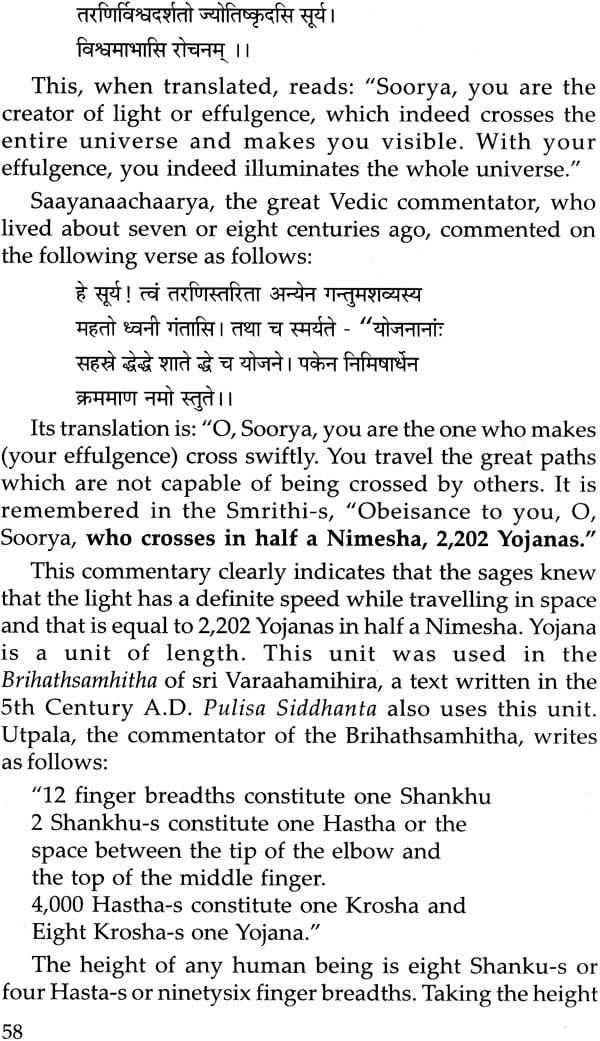 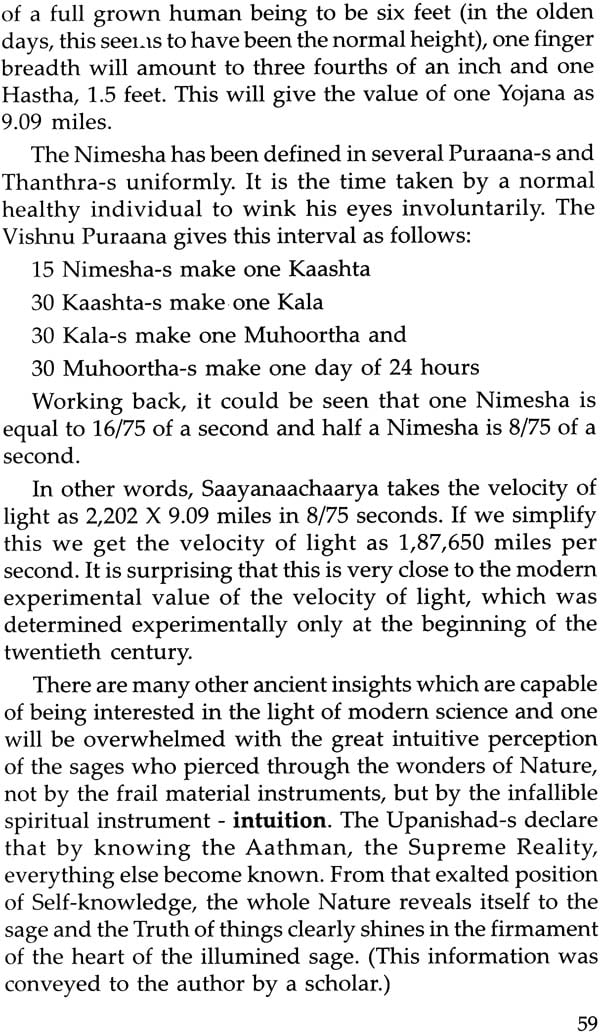 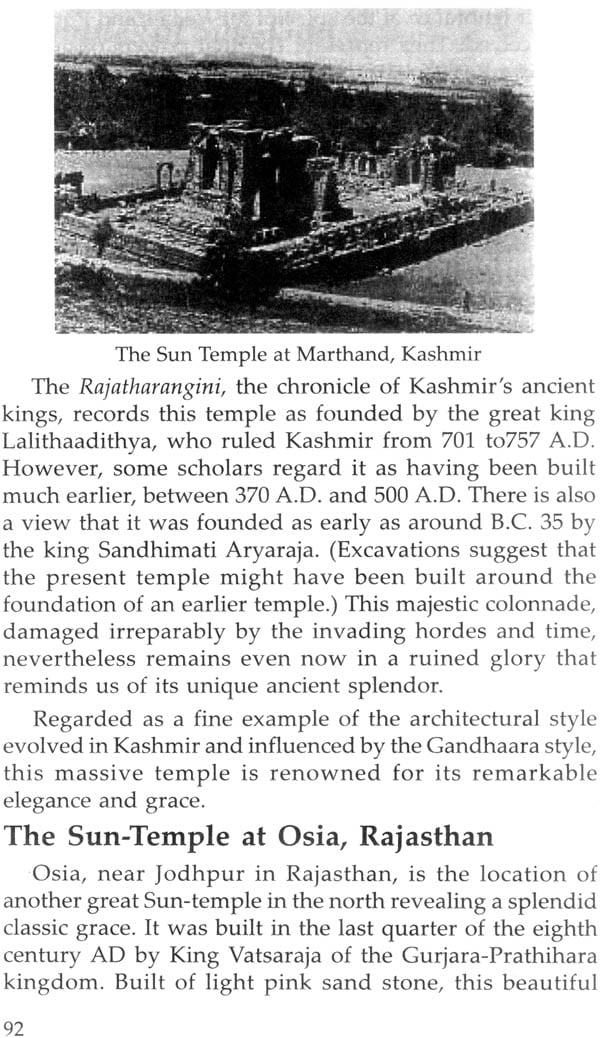 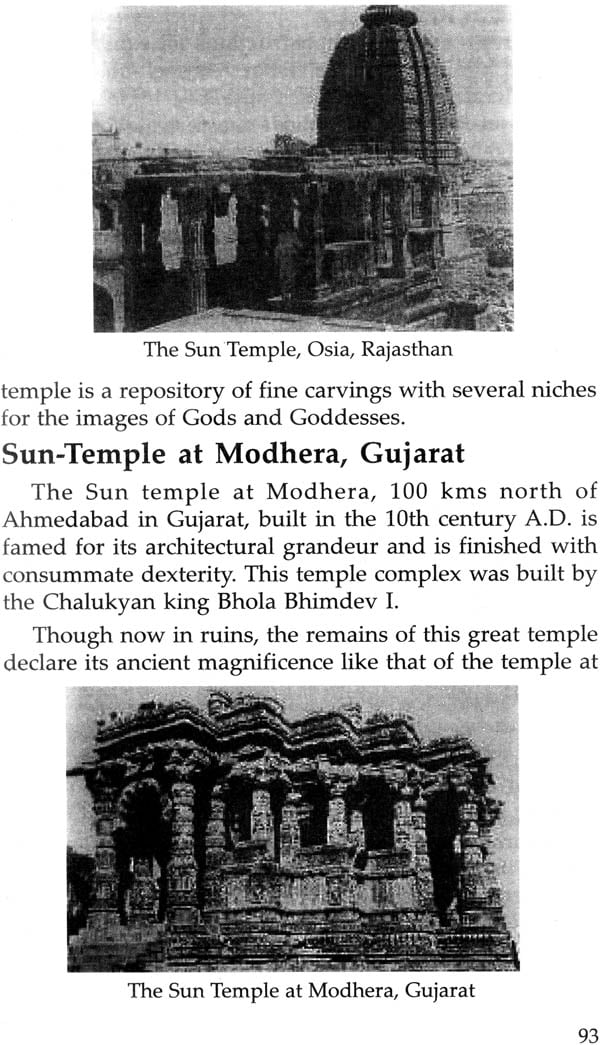 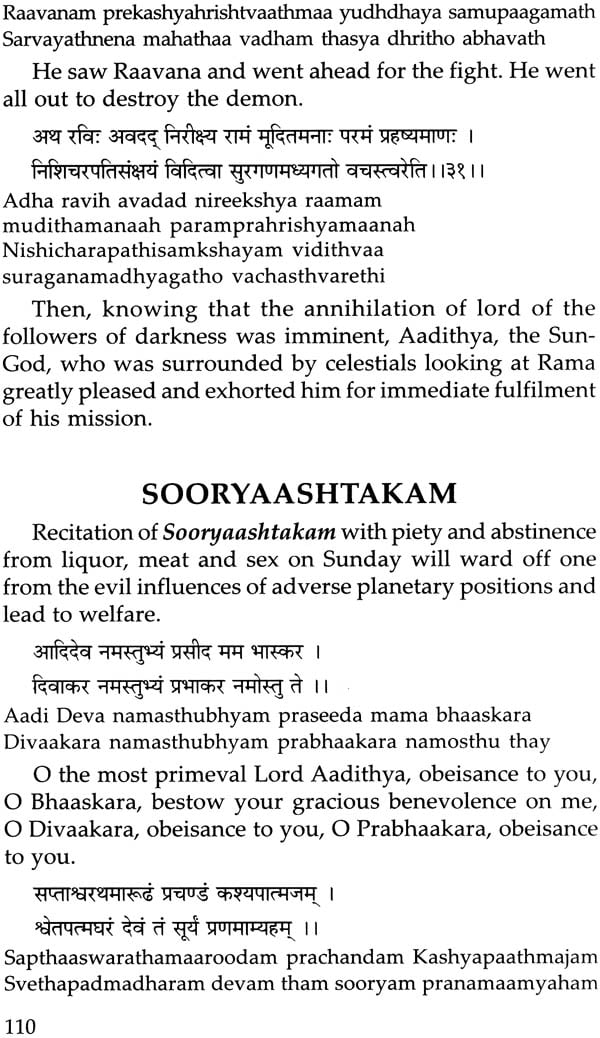 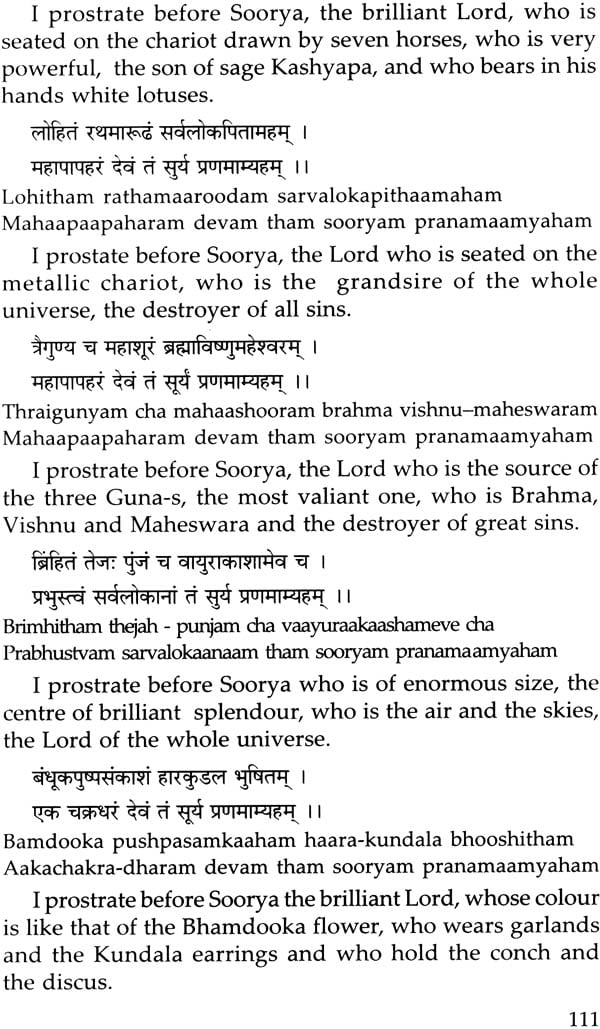 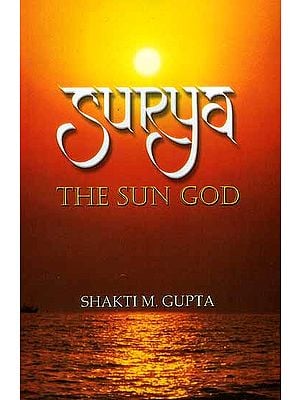 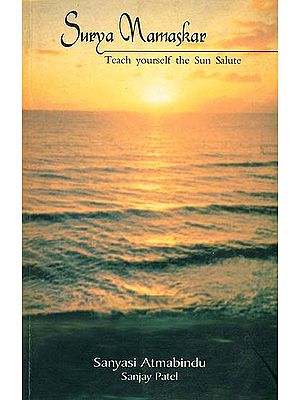 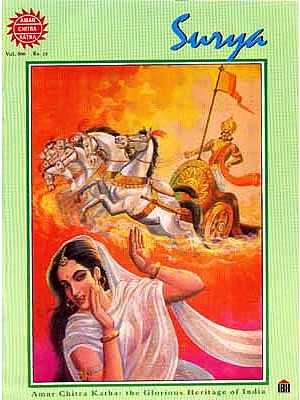 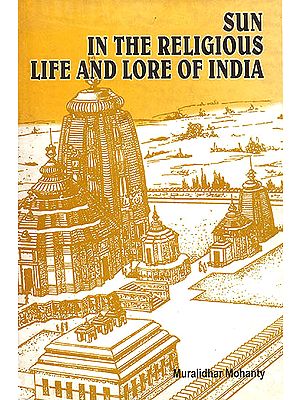 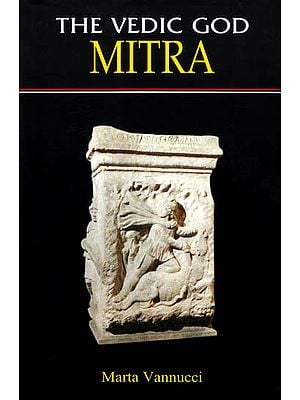 Gods and Goddesses in Indian Art and Literature (A Big Book)
By Dr.N.C.Panda
$132
FREE Delivery 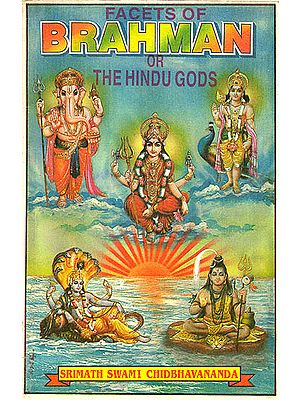 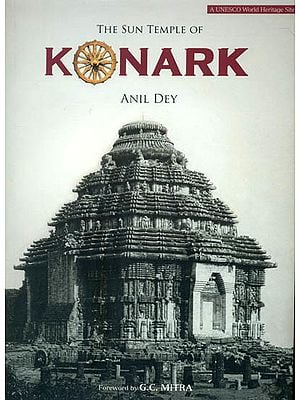 The Sun Temple of Konark
By Anil Dey
$62
Sold Out 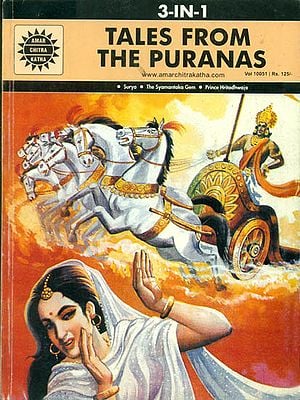