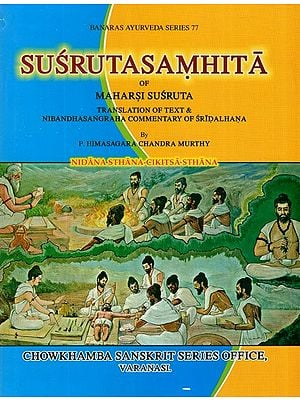 Nidana, Sarira and Cikitsa, components of Susrutasamhita, are the contents of this book.

Susruta's Sarirasthana is considered as the finest among such topics of other treastises. The first chapter in this part shows the depth of the philosophical knowledge of the preceptor, Lord Dhanvanari. In addition, it also emphasizes the significance of such information in understanding the human body in terms of its origination and development. Meticulous description of Avyakta or Prakrti during the evolutionary process towards the creation of living and non-living things has been proposed. Conglomeration of Prakrti, Mahat, three Ahankaras, five Jnanendriyas, five Karmendriyas, Manas, Pancatanmatras and Pancabhutas along with Atma considered responsible towards animate evolution. In the inanimate evolution, the above mentioned factors associate except for five Jnanendriyas five Karmendriyas and Manas. Other factors such as Svabhava, .Isvara, Kala, Yadrccha, Niyati and Parinama are also considered as cause of manifestation of certain characteristics of various materials in understanding the nature as mentioned by Susruta and other stalwarts. These philosophical doctrines are essential in understanding the fundamental principles of Ayurveda.

The information on Sukra (Semen) and Sonita (Ovum) regarding their function in the formation of zygote, their association in various pathological conditions and management has been provided in a well-defined manner. Information on stage-wise (including month-wise) progress, precautionary care to be taken, during the developmen of fertiized egg, embryo and foetus till the delivery time of child has been vividly discussed. The process and managment of childbirth is dealt with in a feasible manner. The anatomy given in this work is accepted as a standard reference by many and hence the well quoted statement "Sarire Susrutah Sresthah” exists.

Major portion of Cikitsasthana is dedicated to explanation of surgical treatment procedures. The first and second chapters of this part include information on management of wounds. The procedures to be followed during treatment of bone fractures and dislocation of joints have been discussed in the third chapter. The details on treatment approaches of various neurological conditions have been furbished in fourth and fifth chapters. Unique methods such as cauterization with alkaline substances and fire therapy have been discussed in this part. Susruta' s Ksarasutra procedure is a revolution in the treatment and management of Fistula-in-ano. This technique was popularized by Dr. P. J. Deshpade and has been even quoted as "Deshpande's technique" in allopathic text books of surgery. The prescriptions given in Kusthacikitsa (management of skin disorders) are of great releavance in the present practice. The formulations of Ayaskrti are worth adopting. The pharamaceutical technicalities given in the context of various formulations are valuable in view of therapeutic efficacy. Silajatu is considered as of great use in the mangement of Madhumeha. As a matter of fact, Susruta mentioned that there is no disease that cannot be cured with Silajatu. The utility of Maksika is also considered in this context. Ethical approval and consent by king towards surgical removal of confounded foetus indicates the visionary administrative state of affairs during Susruta' s time. The medical management strategies discussed in the context of treatment of various diseases is practical and clinically applicable.

The effective treatment strategies of absces, tumours, scrofula etc., have been discussed. The management of Ksudrarogas is completely filled with successful formulations. Though these are considered as minor diseases, the treatment of Ksudrarogas is not an easy task. Hence, they are often interpreted as Ksudra- the wicked or crooked. The hygienic principles are furnished in the chapter entitled "Anagatabadhapratisedhaniya"- treatment of diseases which yet to afflict. This shows significance of prevention of diseases and promotion of health. Importance of Vajikarana (Aphrodisiacs) and Rasayana (Rejuventive and immune-modulating therapy) have been discussed. The prescriptions given for promoting mental health in.

Medhayuskamiya chapter are of great use in abnormal psychological conditions also. The details of features, properties, method of administration of Soma (for attaining limitles longvity) and other wonder herbs were discussed in twenty ninth and thirtieth chapters. The practical applications of the preoperative procedures such as Sneha (Oleation) and Sveda (Sudation) have also been discussed. The diseases that can be cured by emission and purgation, significance of basti (enemata) therapy, its applicability, possible complications in the administration of this technique and managment are vividly described. The post-operative procedures of the cleansing therapies were provided in thirty nith chapter while the fortieth chapter includes information on the procedures of inhalation of smoke, errhine medication and gargling.

Taken together, this part of Susrutasamhita is very beneficial to the students of Ayurveda in understaning the pathogenesis and treatment strategies of diseases. Considering the acceptance received for the translation of the first part (Sutrasthana), the second part (Nidanasthana, Sarirasthana and Cikitsasthana) has been taken up and completed. The translation of the third part (Kalpasthana and Uttaratantra) is under way and shall be made available to the readers shortly.

I am thankful to Brijmohan Ji Das Gupta for this encouragement. I sincerely recognize the help rendered by my family and others in this regard. 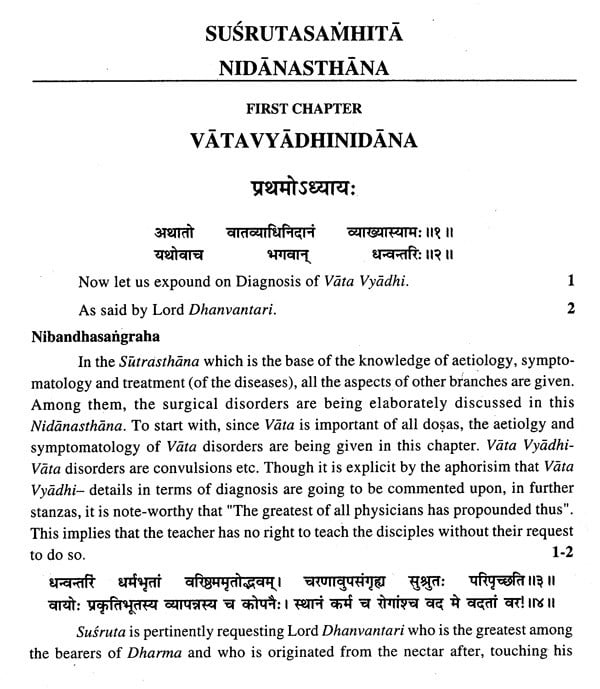 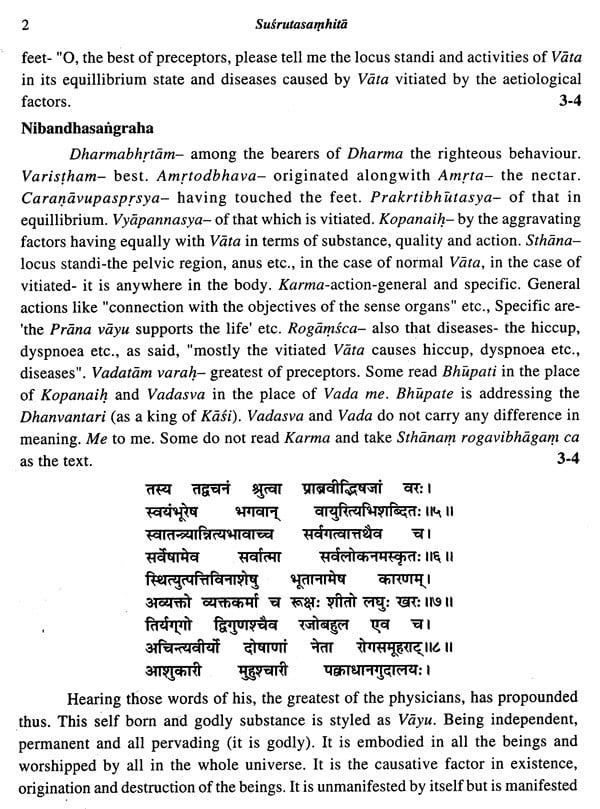 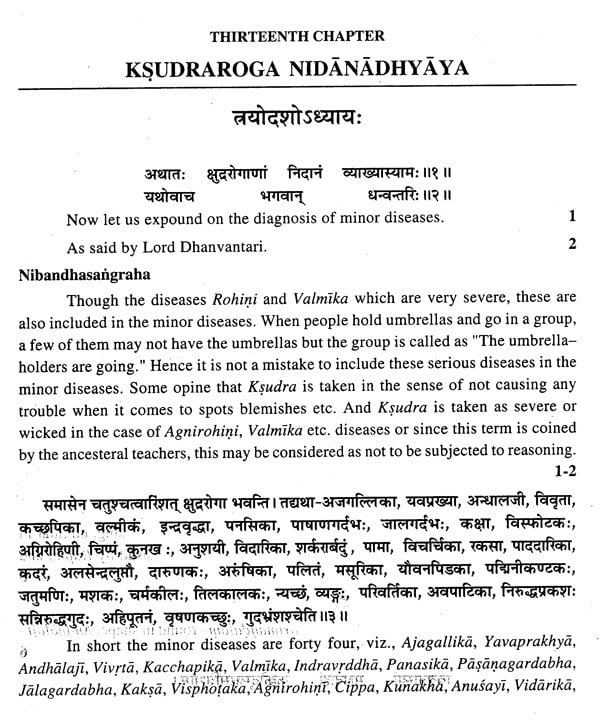 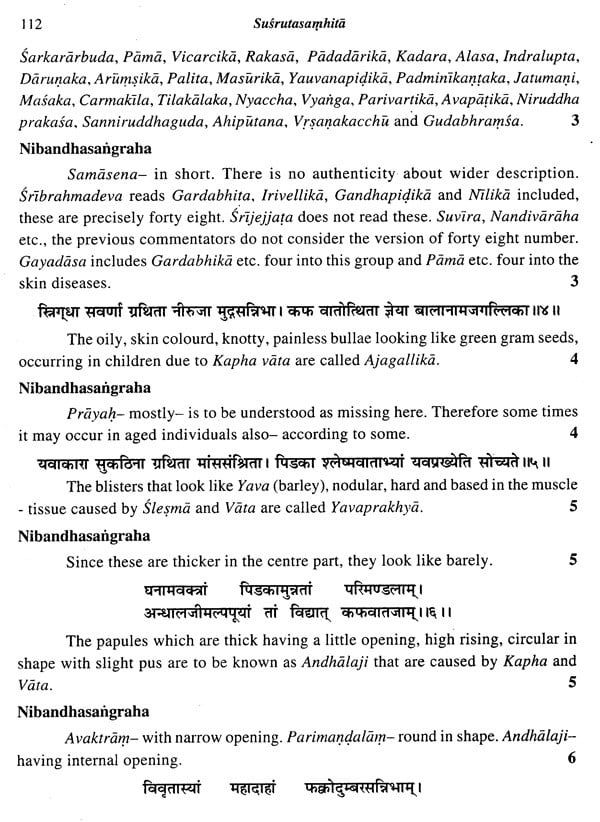 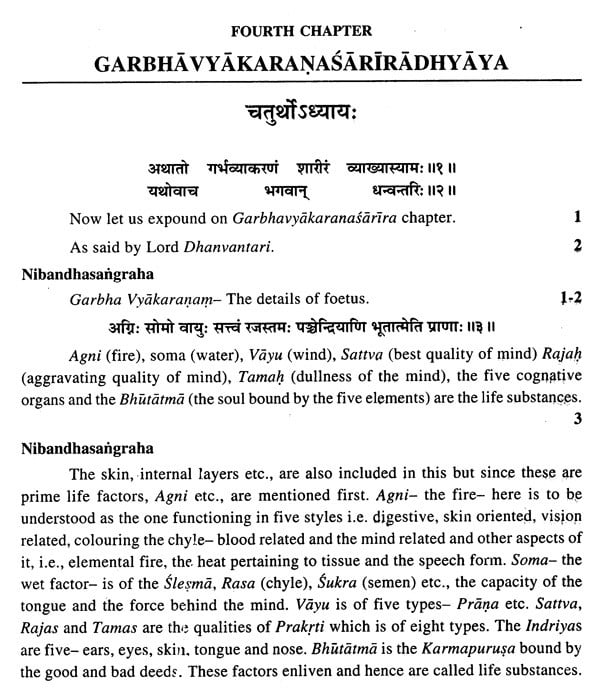 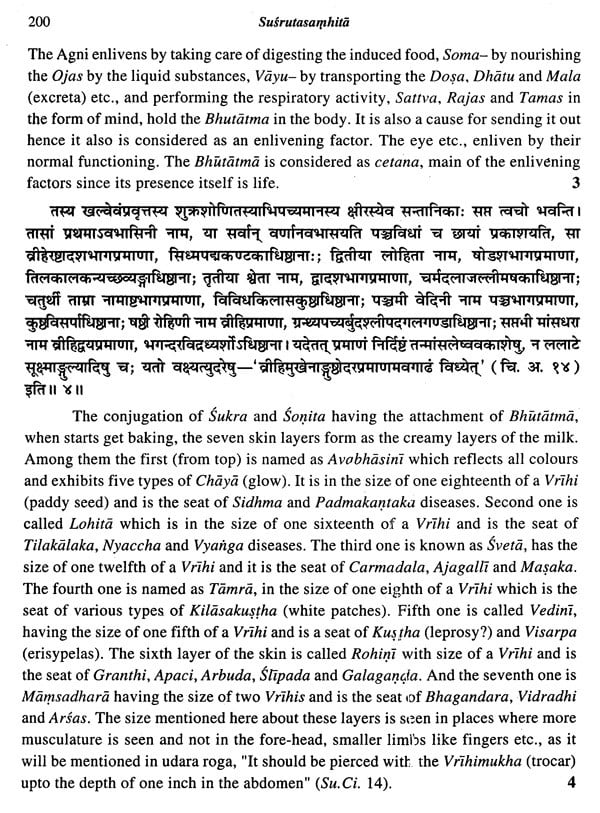 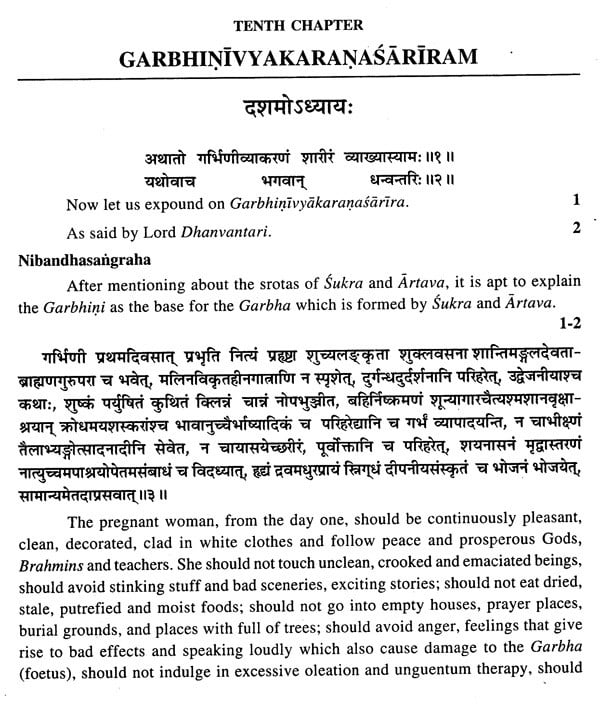 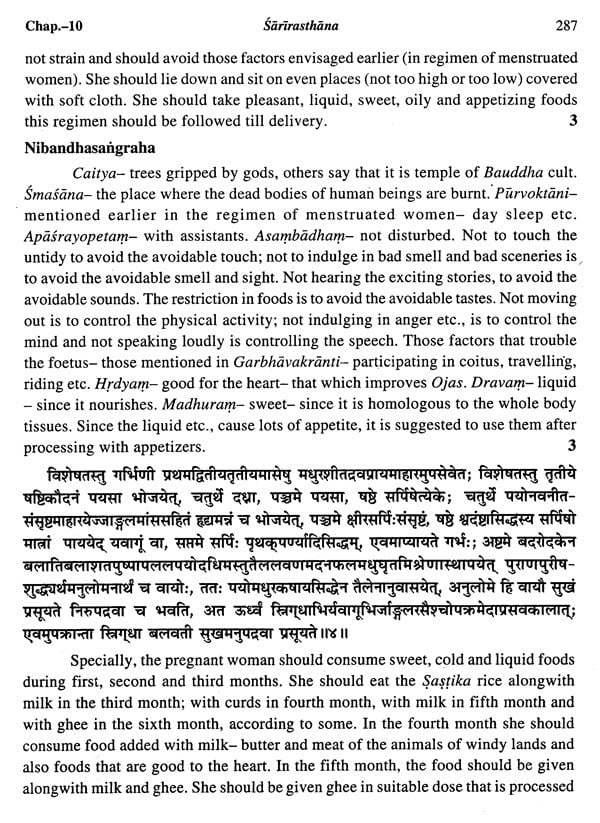 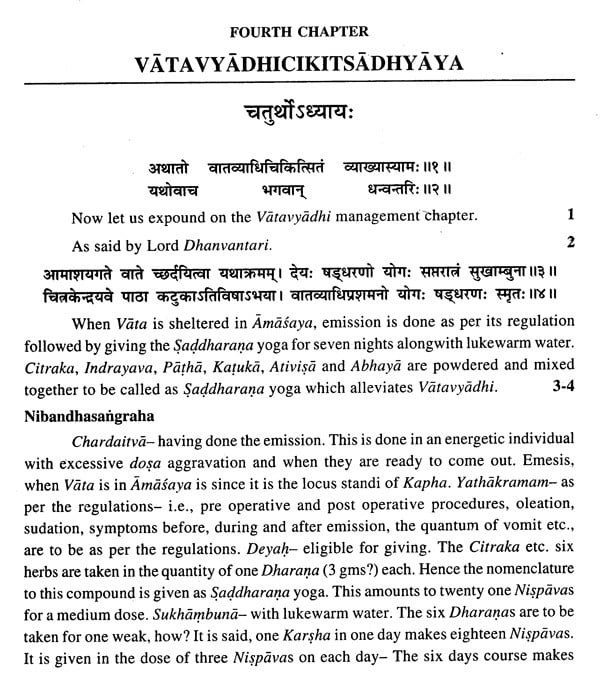 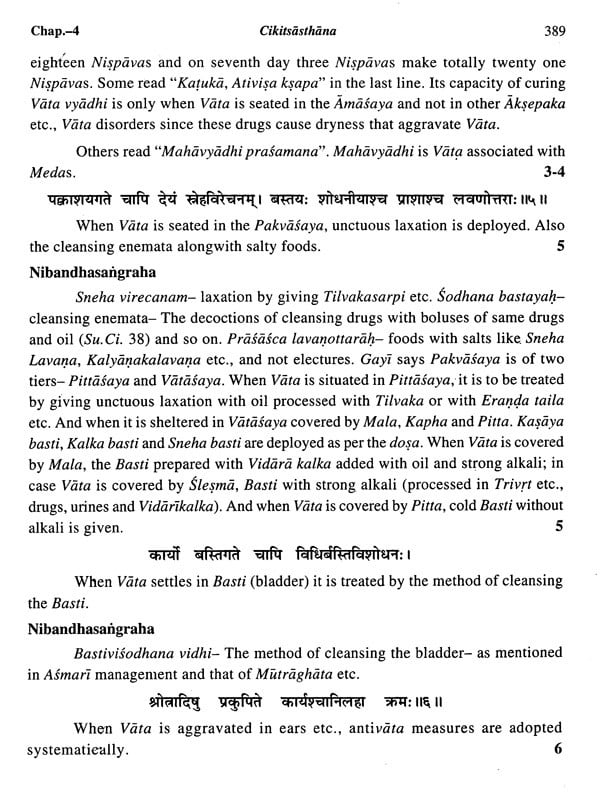 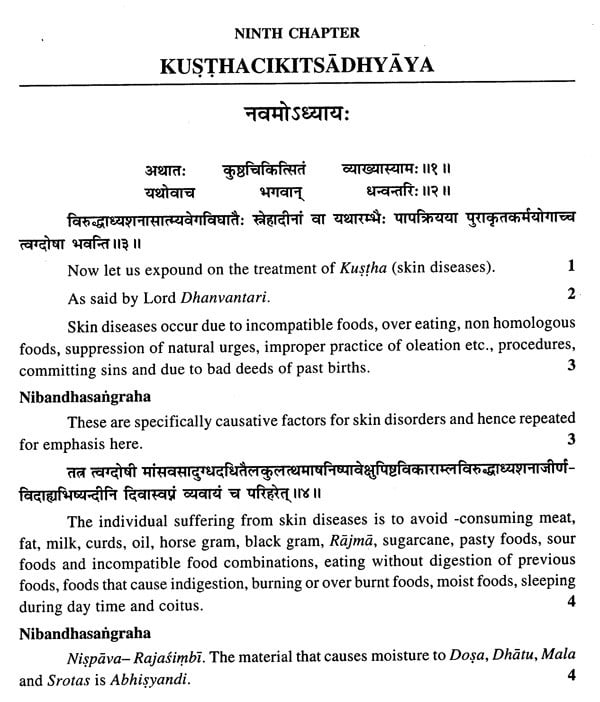 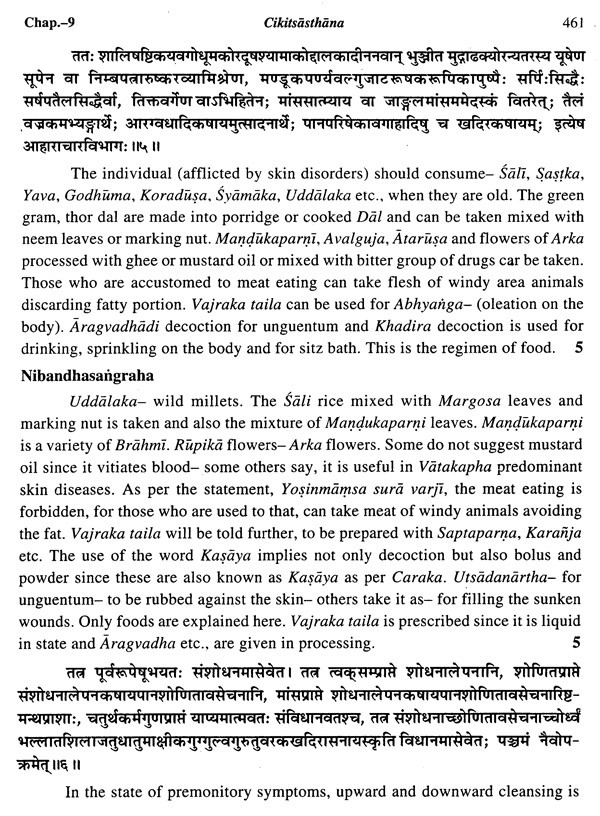 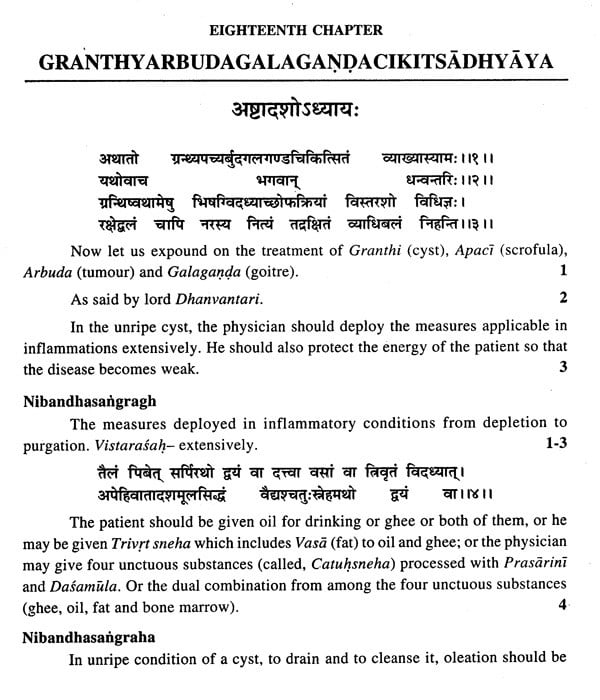 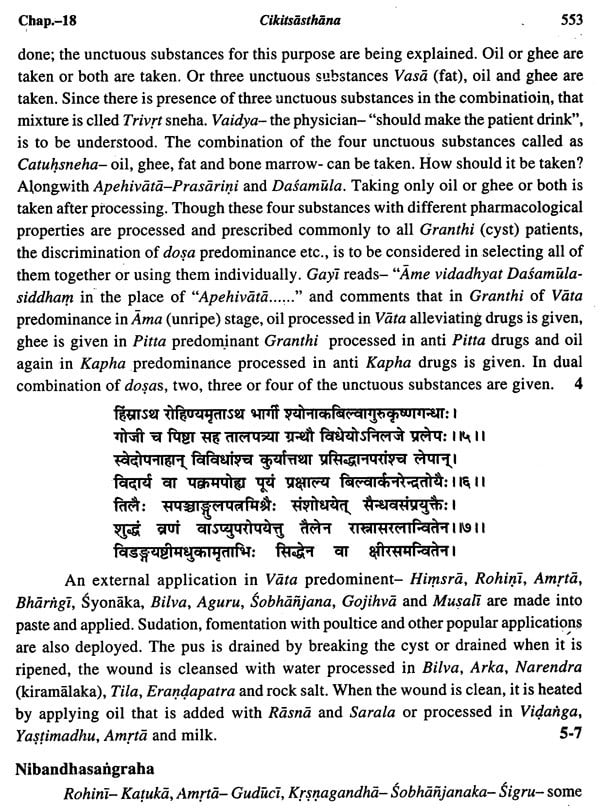 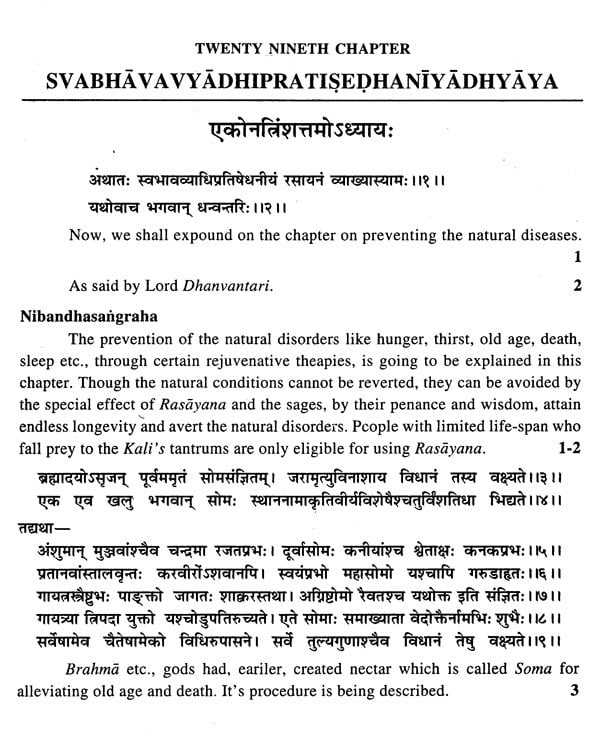 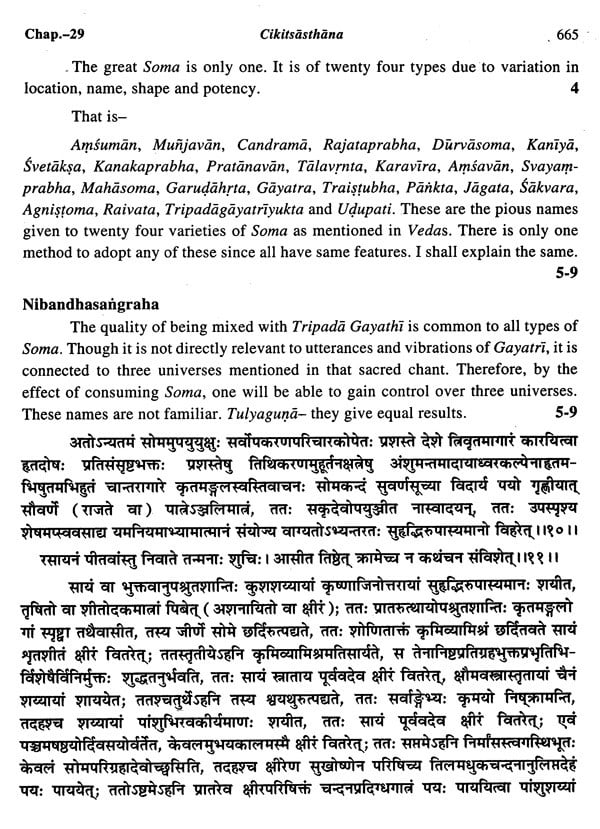