Is natural history a science? Are there scientific ways in which we can give wild animals a better chance of survival? How does conservation actually work?

Ullas Karanth has been evolving practical, science-based conservation solutions for over a quarter of a century. He has developed camera-trap sampling techniques that are now employed to monitor predators such as tigers, jaguars, cheetahs, and leopards across the world. His book provides a unique insight into wildlife conservation from the perspective of an internationally renowned tiger biologist.

Karanth opens up the secret world of predators-from wild dogs and leopards to tigers. He talks about hours of walking trails in the jungle, setting up camera traps, collecting big cat faeces and examining them: he evokes both the drudgery and the thrill of being a scientist in the wild. His writing is marked by a passionate, yet rational, commitment to saving the animals he works amongst.

K. Ullas Karanth is a Senior Conservation Scientist with the New York-based Wildlife Conservation Society (WCS) and the Director of its Indian programme. He is a Scientific Fellow of the Zoological Society of London and serves on the boards of WWF-lndia and the Ranthambhore Foundation. His research findings have been published in reputed journals such as Proceedings of the National Academy of Sciences (USA), Ecology, Journal of Animal Ecology, Journal of Zoology (London), Journal of Tropical Ecology, Conservation Biology, and Biological Conservation, as well as in several scientific books. His book, The Way of the Tiger, is widely acclaimed. He was awarded the prestigious J. Paul Getty Award for Conservation Leadership in 2007.

The tigress Sundari ambles to a pond, crouches to drink, then reclines with her hindquarters in the water. At the sound of a vehicle she retreats, her rust-gold coat blending into the pale yellow of bamboo as if she has never been. But a few minutes later she returns and halts by a tree only thirty meters from where Ullas Karanth and I sit motionless on the ground. Sundari sniffs the bark, rubs a cheek on it, and then swivels around to mark with a squirt of scent. It is mid-March 1991, and I am in India’s Nagarahole National Park to learn from the long-term tiger study conducted here by Ullas and his co-workers. In Sundari’s presence we do not dwell on the science of her behavior or on conservation. We are too enthralled by her elegance, restrained power, and sheer beauty. Indeed Sundari means ‘beautiful.’ Here is one of the most wonderful expressions of life on earth and it lifts our spirits.

In an age when nature is being viewed mainly in terms of natural resources, in dollar values, my heart speaks to Sundari. She is a strong reminder that conservation is also a moral issue of assuring other beings on this planet their right to exist. Fortunately religious belief and national pride have contributed to the tiger’s survival in India and more remain in that country than any other. Nevertheless, on viewing a tiger I feel indignation that its survival is so wholly dependent on human whim. Respect for the environment, a loyalty to the earth, should be part of everyone’s ethical attitude and responsibility, whether rich or poor, urban or rural, if we expect plants and animals to persist in all their variety and ecological complexity. The Hindu goddess Durga rides a tiger to defeat the evil that affects the world, including, I presume, the mindless destruction of our environment.

The tiger may be a natural icon of India, but it does kill livestock and occasionally people, transgressions for which it is trapped or poisoned. Gone from Turkey, Iran, and several other countries of its vast former range, its habitat fragmented, and ever larger forest tracts empty because of intensive poaching for its skin and bones, the tiger is in danger of vanishing from yet more countries. However, options remain even where the species is now rare. There is cause for optimism. Tigers are resilient, forest persists, and the animal has a worldwide constituency concerned about its fate. Conferences establish conservation goals, determined advocates promote action, and field biologists observe the tiger’s habits, determine its status, and monitor populations. Yet far too few skilled investigators are active to study the tiger and its prey, train local staff to collect relevant information, and resolve conflicts between communities and wildlife. The status of tigers remains speculative in several countries, and we even have too little hard information from various parts of India.

Tiger conservation, as that of other species, has four cornerstones. First and most basic is knowledge of tiger ecology at each site, including information on prey species and the human population, upon which realistic and innovative conservation measures can be based. Conservation also depends on well-maintained and strictly protected reserves and other key areas with a guard force to deter poaching and degradation of the landscape by people and livestock. Solid domestic and international wildlife laws with vigorous enforcement against trade in tiger products are also essential. And, finally, local communities must be involved in the conservation effort through education and active participation, and a partnership with local government and other institutions must be initiated and maintained.

I mention these issues because no one in India or elsewhere in the world has done more to promote all aspect of tiger conservation than Ullas Karanth. With deep commitment, Ullas has spent a quarter century among tigers, becoming India’s finest field biologist and the tiger’s most persistent and successful advocate. His superb science has enhanced his role as conservationist. He has developed reliable techniques of censusing tigers and demonstrated the direct link between tiger and prey abundance. His depth of knowledge has influenced government policy and reserve management in India as well as perceptions and research techniques internationally. His writing, both scientific and popular, including such books as Monitoring Tigers and their Prey and The Way of the Tiger, have influenced a wide audience. Ullas has also trained a core of young field biologists whose dedication and enthusiasm impressed me greatly. Most recently Ullas has initiated a graduate program in conservation biology at a university in Bangalore. For decades to come the knowledge, inspiration, and devotion to wildlife and wilderness instilled by Ullas in others will continue to flow onward and outward to help the tiger and other species endure. The articles collected in this volume are both a testament to and legacy of Ullas’s concern and vision for India’s wildlife.

Above all, Ullas is full of optimism. He is confident that the number of tigers can increase, given our will power, passion, perseverance, and ever-lasting commitment, and he knows that people, livestock, and tigers can coexist if properly managed. As Teilhard de Chard in wrote: ‘The future belongs to those who give the next generation reason to hope.’ 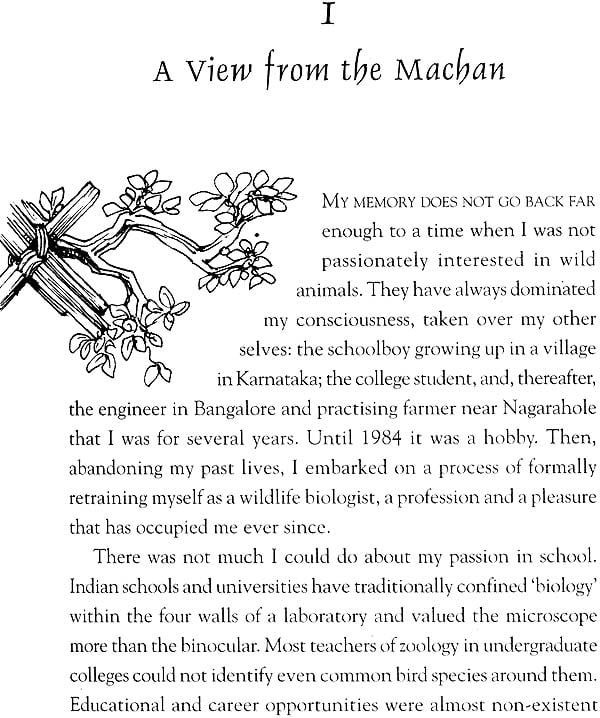 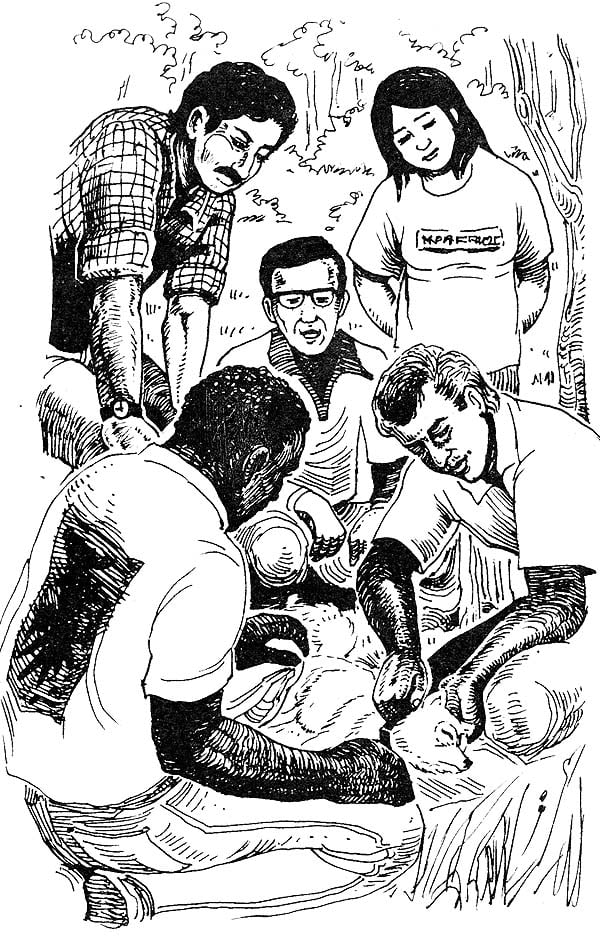 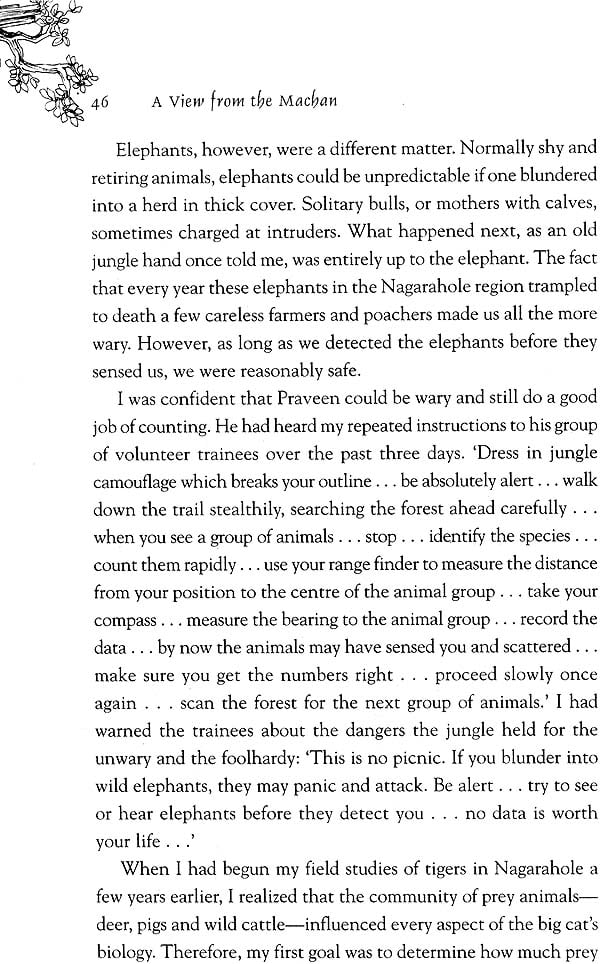 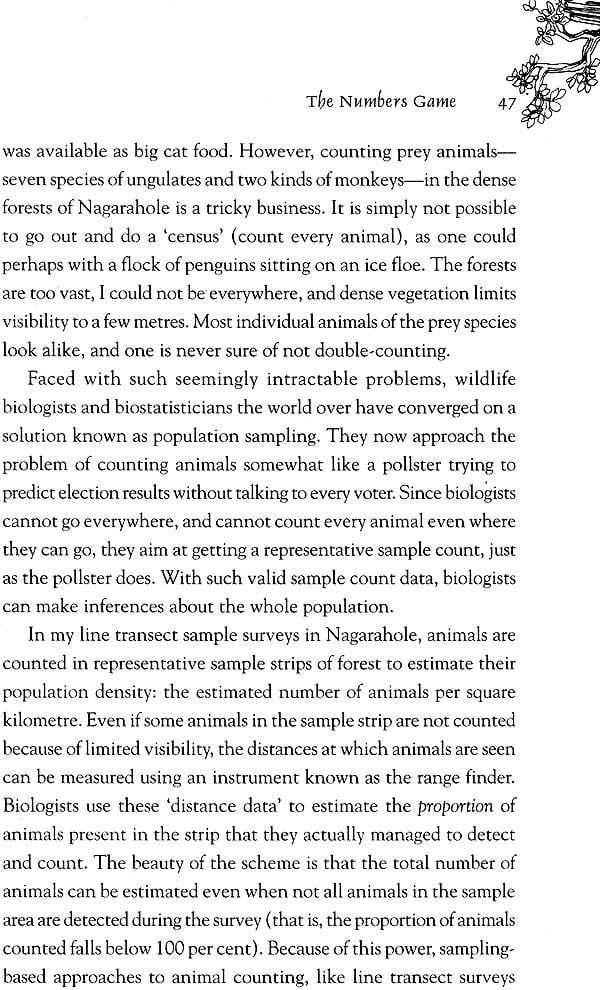 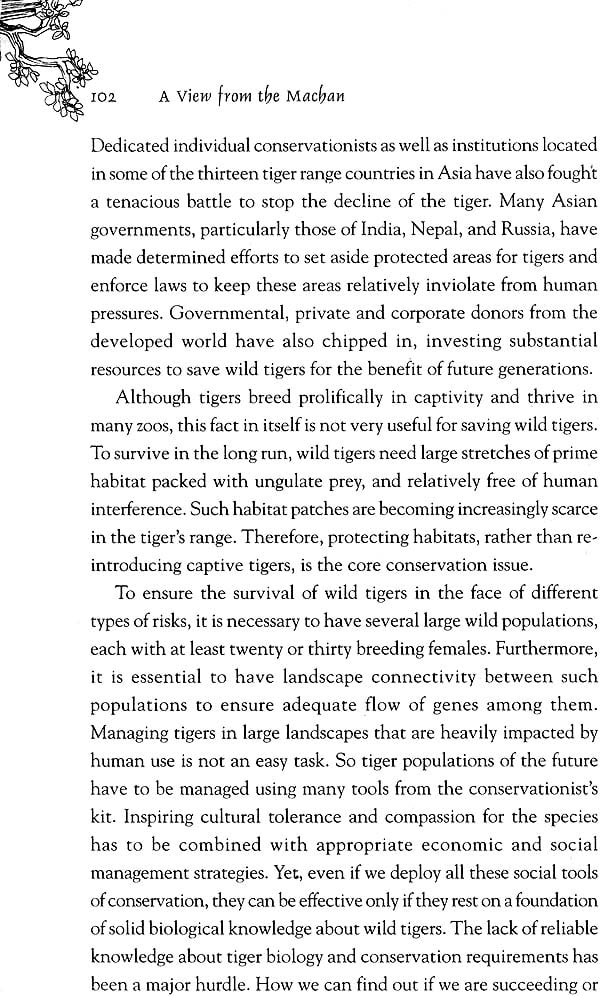 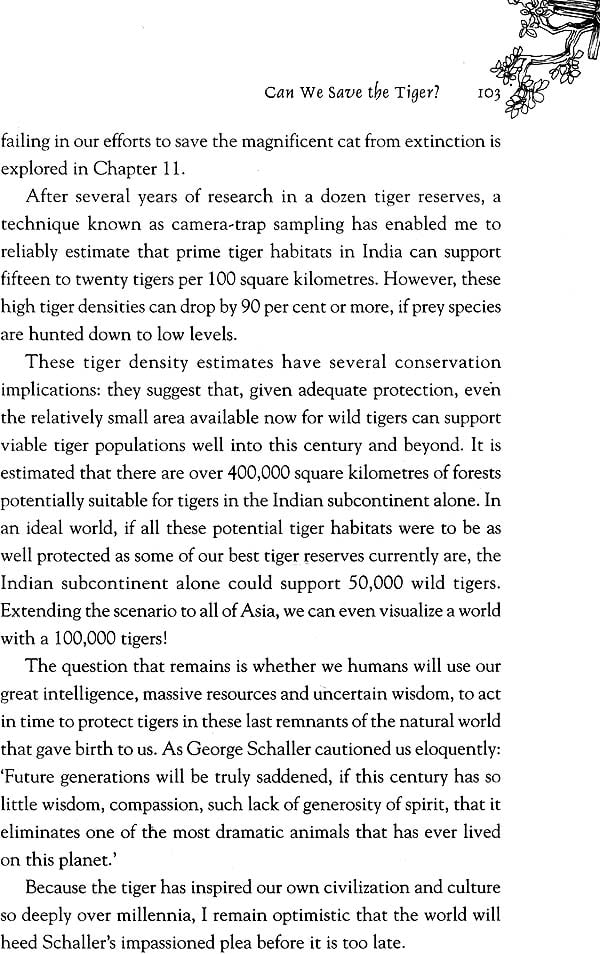 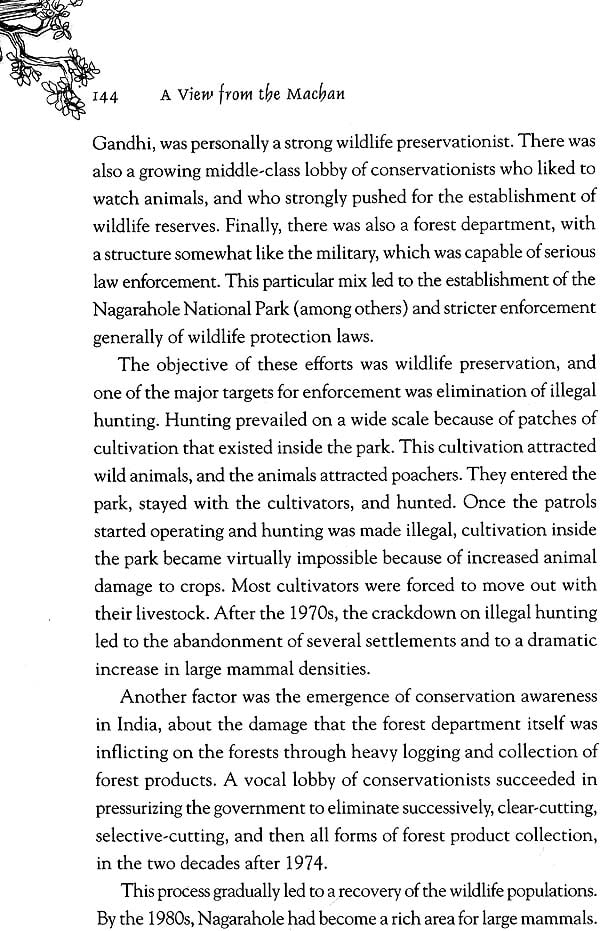 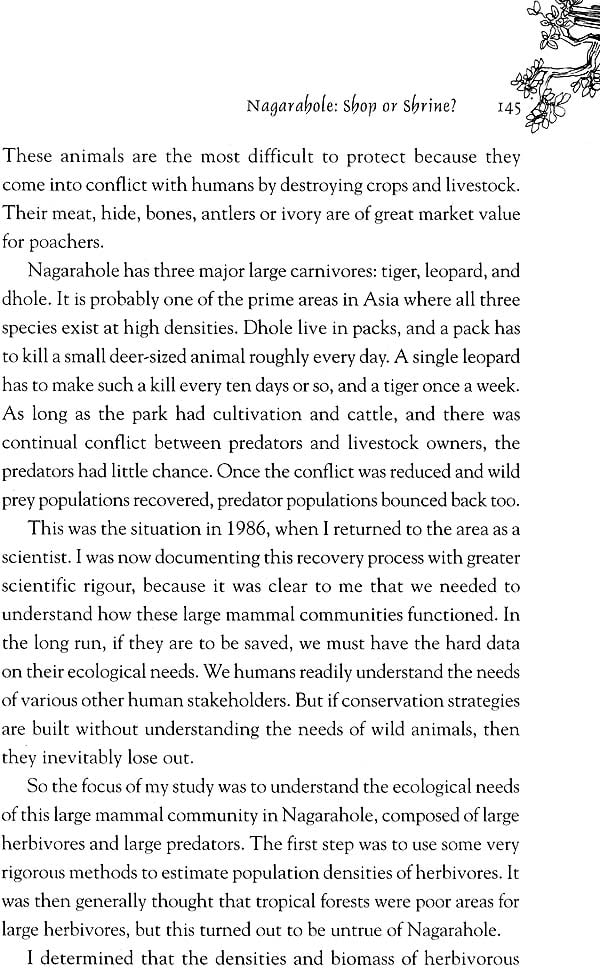