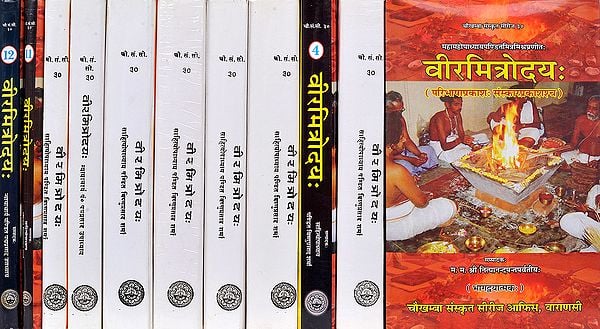 The Viramitrodaya, of which the first section is here offered to the public, is an extensive treatise on Dharmashastra. It consists of twenty-two sections-called ‘Prakashas’ – enumerated by the author himself in verses 40-46 of the present work.

MSS. of the sections of which the extent in shlokas is noted above are available. These numbers come to the total of 1,38,810. So we can safely regard the complete work as containing over 2 lakhs of shlokas, and thus being more than twice the size of the Mahabharata. The names of subjects dealt with shew that the work is more like an ‘Encyclopedia of Hindu learning’ than a mere ‘digest of Hindu Law’.

The author’s name is Mitra Mishra, son of Parashurama Mishra, and grandson of Hamsa Pandita; they belonged to a race of Brahmanas living in ‘Gopachala’ (?). This is all that we can learn from the introductory verses of the present work about the family of the writer. The author has begun each of the 22 sections of his work with long introductions and a careful study of these will afford more definite information with regard to the author.

The work was written under the patronage of the king of Orchha, Virasimha Deva, the greatest patron of Hindu learning of his day, and withal an enlightened ruler who in the interests of peace married his brother’s daughter to the Mogul Emperor. The few European historians who have glanced at the subject, with a regrettable lack of sympathy and of accurate knowledge describe him practically as a savage and stigmatise him as the “murderer of Abulfazal.” Some of the most famous Hindi poets-for instance Keshava Deva-belonged to his court. He built a splendid temple at the cost of 33 lakhs of rupees in Vrindavana which was ruthlessly razed to the ground by Aurangzeb. Further particulars with regard to this king may be learnt from Blochman’s Ain-i-Akbari and the History of Bundelkhand published in the journal of the Asiatic Society of Bengal in 1903.

The great merit of this grand work is that the style is easy and clear and the author’s meaning is always plain. The texts that have been quoted are always interpreted in the most approved style of Mimansa, and all differences reconciled, and a clear consistent doctrine evolved, unlike another huge digest, the Hemadri, which merely piles up endless Smriti texts, leaving the reader to wander unguided through the labyrinth, with no clue as to what the author wanted to be taken as settled law.

Besides this encyclopedic work, Mitra Mishra wrote the following works-
(1) Anandachampu; a manuscript of this work exists in the collection belonging to the Government College at Benares.

(2) A commentary, also named ‘Viramitrodaya’, on the original Smriti of Yajnavalkya. This work seems to have so far escaped the notice even of such scholars as have expressly taken trouble to investigate the history of Hindu legal literature. The late Hon. Mr. Mandlik had in his possession the Achara portion of the work. But he was apparently misled by the name ‘Viramitrodaya’ and refers to it only as a portion of the better known digest of the same name. This same mistake has been repeated by the late Dr. Shiromani in his valuable treatise on Hindu Law, from which it seems to have been copied by other writers on the subject So far as I am aware the only manuscript of the Achara section extant is the one referred to above, from which I have obtained a copy. Of the Vyavahara section there are two manuscripts known to me; one is in the Raghunath Temple Library of H. H. The Maharaja of Kashmir, and the other in my possession, having been given to me by a Pandit of Benares. Of the Prayashchitta portion, I know of only one Bengali transcript, in the library of the Asiatic Society of Bengal, from which also I have obtained a copy.

During the last hundred years a strange fate has overtaken the whole legal literature of India. The study of the original texts has been more or less neglected by the administrators of justice and this has thrown the whole subject of Hindu Law-at least that section of it which has fallen under the spell of the British Indian courts of Justice-into inextricable confusion. To what pass this confusion has come may be gathered from such facts as this: as regards adoption the people of middle India have been forced to accept the guidance of the Dattakamimansa by Nanda Pandit, a Maharashtra, whose work is repudiated by the writer’s own caste-people, who refuse to be bound by his hard and fast rules, and have evolved far more liberal rules for themselves on the subject; while those of Bombay are under the themselves on the subject; while those of Bombay are under the influence of the Mayukha, written in far away Bundelkhand; and the Gujeratis are ruled by the Vivadatandava, the work of a Benares Pandit; and further, the rules about adoption as given in the Viramitrodaya the “paramount authority” of the “Mitakshara School”, which diverge widely from those of the Dattakamimansa, are not even mentioned in High Court judgments, much less enforced.

It is sad to contemplate the effects of this neglect of the study of the original texts. No encouragement is afforded either by the ruling princes or by our Universities; one can take the highest University degrees in law without the slightest knowledge of the language in which the original laws of the land are written. A small instance of the prevailing lack of exact information in respect of Hindu legal literature is afforded by a passage contained in I. L. R., Allahabad 1895, page 314, where the Vyavaharamayukha is spoken of as a commentary on the Yajnavalkya Smriti! When such is the attitude of the highest administrators of law in the land towards the study of Hindu law in the original texts what chance is there of its being judiciously and accurately applied? This ignorance is all the more deplorable and dangerous when case-law is made to supersede customary law, and is steadily over-riding text-law. Misunderstood and misapplied texts are thus playing havoc with all customs and traditions, especially when applied with all the logical acumen and unbending rigidity of the genius of English lawyers these gentlemen lose sight of the fact that the original texts were being constantly modified by the indefatigable labours of a host of commentators and digest-writers, and learned Mimansakas. All this plasticity has now been replaced by the rigidity of inert case-made law. Even when a clear-minded judge like Sir John Edge makes a stand against this state of things (I. L. R. All, 1895), he conservatism of courts proves too much for him; and his judgment is upset by a body of lawyers sitting in London, probably entirely unacquainted with the original texts of Hindu law, dependent on more or less inaccurate translations of only a few books, not duly realizing the conditions of life prevailing here, and wedded to their own ideas of the inflexible character of precedents. It was the aim of the old digest-writers to minimize the differences met with in the Smriti texts and to make for unity; their methods were altogether different from those adopted by the modern courts who make it their business to emphasise differences. This has put a stop to the normal evolution of Hindu Law, which went on unimpeded till about the end of the 18th century, the Balambhatti commentary on the Mitakshara (written 1760-80 A. C.) being the last representative of the old digests. About this time the petrifying influence of the British Courts of justice began to fall upon Hindu Law.

Excepting those portions of the law which had the misfortune of being decided by these courts and being thus petrified, all others continue to be fluid and adaptive and hence progressive. For instance, marriages are constantly taking place which are not recognized by the Viramitrodaya or by Madhava; and yet no case has ever gone to the courts seeking to have these declared null and void; and the effects of this is that customs regarding marriage are slowly undergoing modifications, in accordance with the changed conditions of modern life. on the other hand, as soon as a question of adoption arises, there is an appeal to the Courts and every effort is made to perpetuate a single rigid interpretation of the law, whose salutary growth and adaptability is thus constantly artificially checked.

It is difficult to devise a scheme for the remedy of this undesirable state of affairs. But the first step that may be taken appears to be the appointment of a representative Committee of men of light and leading, some of whom should be versed in the original works of Hindu Law, while others should be equally well up in the Civil Codes of European and other Countries, and all of them free from theological bias. When the theological bias has once been got rid of, and the law compiled and expressed in the modern languages it will be easy to keep the whole thing in touch with the changing conditions of life. in such a compilation much useful aid could be derived from the Jain, Bauddha and Musalman systems, which are more liberal and rational in many matters. 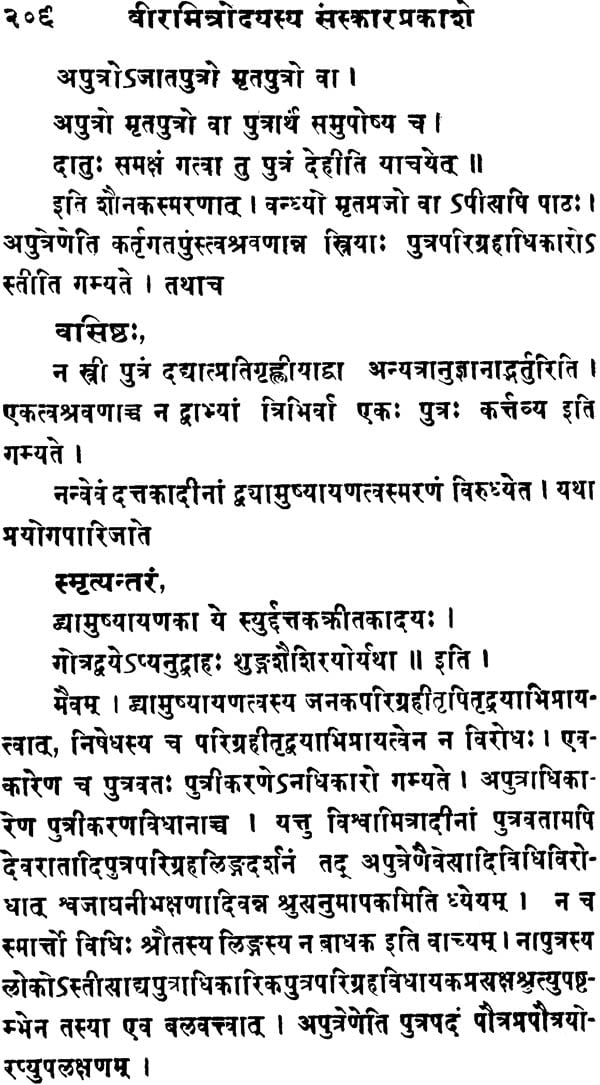 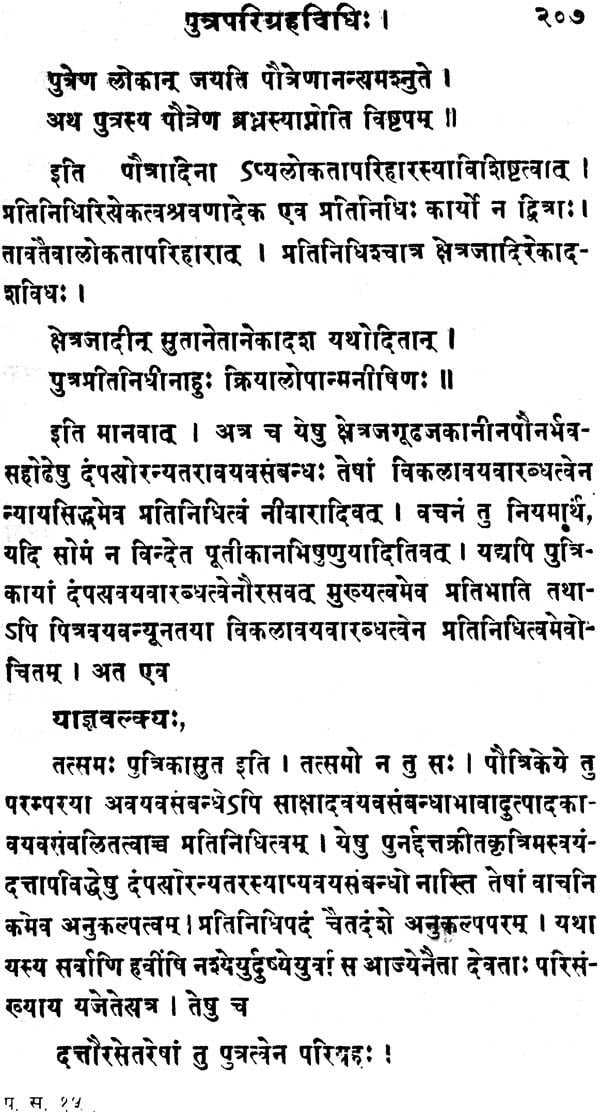 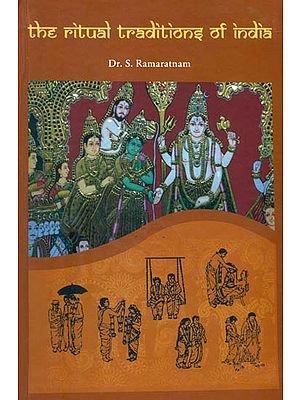 Professor Kane's Contribution to Dharmasastra Literature
By S.G. Moghe
$31.50
FREE Delivery
$42  (25% off)
Add a review
Have A Question