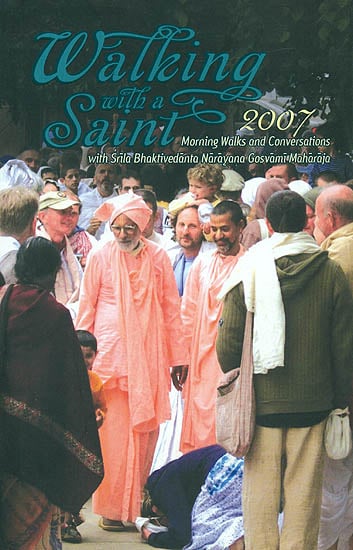 The gift of associating with a great saint has been explained by the incarnation of the supreme personality of Godhead, Lord Kapiladeva, to His divine mother, Devahuti. Lord Kapiladeva's words are quoted in the ancient vedic literature as follows:

Every learned man knows very well that attachment of the material is the greatest entanglement of the spirit soul. But that same attachment when applied to the self realized devotees, opens the door of liberation.

The sysptoms of a sadhu are that he is tolerant, merciful, and friendly to all living entities. He has no enemies, he is peaceful, he abides by the scriptures, and all his characteristics are sublime.

Engaged constantly in chanting and hearing about Me, the Supreme Personality of Godhead, the sadhus do not suffer from material miseries, because they are always filled with thoughts of my pastimes and activities.

O My mother, O virtuous lady, these are the qualities of great devotees who are free from all attachment. You must seek attachment to such holy men, for this counteracts the Pernicious effects of material attachment.

By him causeless and unfathomable mercy, the Supreme Lord Sri Krsna semds His associates to bless this netherworld with their presence and invaluable instructions.

Transcendental personalities, the associates of the Lord, have no birth and death no father or mother no caste or creed, no karma to suffer or to enjoy and apparently material situation are merely a performance of their pastimes.

One such great saintly associate is Srila Bhaktivedanta Narayana Gosvami Maharaja, whose only business here is to free us suffering conditioned souls, totting in the darkness of ignorance, by bearing the torchlight of Vedic knowledge. The guru's business is to operate on our blind cataractic eyes by giving us sight. Lord Kapiladeva explains the benefits of their association.

In the association of pure devotees, discussion of the pastimes and activities of the Supreme Personality of Godhead is very pleasing and satisfying to the ear and the heart. By cultivating such knowledge one gradually becomes advanced on the path of liberation; thereafter he is freed, and his attraction for the Lord becomes fixed. Then real devotion and devotional service begin.

Walking with a Saint 2007 is the third published volume in the series of conversations between Srila Bhaktivedanta Narayana Gosvami Maharaja and his numerous disciples and followers. These conversations were recorded during his daily morning walks, which took place throughout the several years of his widespread world preaching tours, and some of the conversations in many of his darsanas are also included here. Srila Narayana Gosvami Maharaja is a Globally acclaimed scholar and saint, and is also recognized as an eternal associate of the Supreme Absolute Truth Sri Sri Radha-Krsna and Sri Caitanya Mahaprabhu.

The respected reader is cordially invited to join him during these conversation, to truely benefit from the deep wisdom and compassion that emanate from the heart of this great living saint and that are articulated by his potent words.

Western readers may be familiar with Srila A.C. Bhaktivedanta Svami Maharaja, who is renowned as Srila Prabhupada and who is famous for having introduced and spread the glorious teachings of pure theistic thought in the western world. In the same lineage and tradition Srila Narayana Gosvami Maharaja has continued to promulgate this message of Krsna Consciousness across the world. It is by the potency of such great stalwart God – realized personalities that divine knowledge is disseminated.

The ancient Vedic literatures have given humanity access and a glimpse of the divine world or supramundane plane since time immemorial. In essence, they emphasize the enormous importance of the association and guidance of saintly persons for the spiritual seeker's ultimate success, and in many instances establish the extreme rarity of such association.

The Srimad-Bhagavatam, which is regarded as the crest jewel of timeless Vedic authority, illustrates this point 'O Lord, there are as many living beings in this material world as there are grains of sand. Only a few of these are human beings, among whom only a few direct their efforts in search ofa higher goal. Of those who are endeavouring for a higher goal only a few rare individuals seek liberation from this world. And out of thousands of such people, hardly on is actually able to achieve yogic perfection or liberation (mukti). Amongst millions of perfected yogis and liberated souls, it is difficult to find a single peaceful great soul who is fully dedicated to the service of the Supreme Personality of Godhead, Sri Krsna,"

The great Vasisnava saint Srila Bhaktivinoda Thakura says of this verse, "Such pure devotees, who are free from all contaminations of the heart and mind, are very rare indeed. Even among millions of liberated souls, one can hardly find a single pure devotee of Krsna. Therefore no association in this world is more rare than the association of Krsna's devotees." It is in the light of this appreciation that we ask our patient readers to take advantage of the pages of this third volume of Walking with a Saint.

Here in the foreword we include several quotes for your interest, which illuminate the profound nature of the association of such saints. In thinking about writing this foreword, which is one of the first things you respected readers, will see in this book, we considered you would be most inspired by personally hearing about the benefits of saintly association from saints of their own calibre.

The first glorification of such association is an excerpt from Sri Guru Bhakti by Srila Saccidananda Bhaktivinoda Thakura (taken from Rays of the Harmonist, Memorial Edition Sri Vyasa puja, No. 23,2011): " The living entity who is blinded by the delusion of Sri krsna's potency of illusion and bound in the widespread network of material existence wanders here and there. Having been captivated by the hope for happiness, he searches for happiness in knowledge, intelligence, wealth, honor, etc., but by no means can he make himself happy. In this way, the living entity passes many lives.

As a result of accruing great spiritual merit over many births, faith in bhajana is transmitted into the living entity's heart. His only chance of attaining true happiness is in bhajana, devotion to krsna. Sri Krsna is the Supreme Personality of Godhead, and the living entities, called jivas, are His eternal servants. Sraddha is the very strong and determined faith that by performing bhakti to Sri Krsna, all sufferings are dispelled and one becomes situated in one's constitutional position as a servant of Krsna. With this faith the jiva soon takes the shelter of the lotus feet of a bona fide guru and attains all types of perfection, solely by the virtue of Sri guru's grace.

"The boundlessly merciful Vaisnavas are the supreme friends of the fallen jivas in this world. Knowing the jivas to be averse to Krsna, the Vaisnavas instruct them on Bhakti tattva, the fundamental principles of pure devotion. When faith develops in this, the jiva takes shelter of the lotus feet of a Vaisnava, who now instructs him on bhajana. Then when the disciple exhibils suitable qualification, having developed single mindedness and expertise in bhajana, sri guru bestows his mercy upon him by granting the power to behold the storehouse of transcendence, Sri Krsna. Such is the endless mercy of the Vainsnava."

The second excerpt is called Sri Gaura Kisora - The Deity of Ideal Renunciation (taken from Rays of the Harmonist, Memorial Edition Sri Vyasa puja, No. 23, 2011). It was spoken by Srila Baktiisiddhanta Sarasvati Thakura Prabhupada, and compiled translated (into Hindi) and edited by Srila Narayana Gosvami Maharaja. It glorifies the association of great saints in this way: "My gurupadapadma is not a teacher of any of the illusory subjects of this world. Which are aimed only at enjoyment at the same time, he alone is the indisputable genius in every subject in this world. However, because I am deprived and fallen, because of my own weakness not all of my gurupadapadma's teachings have entered my heart. 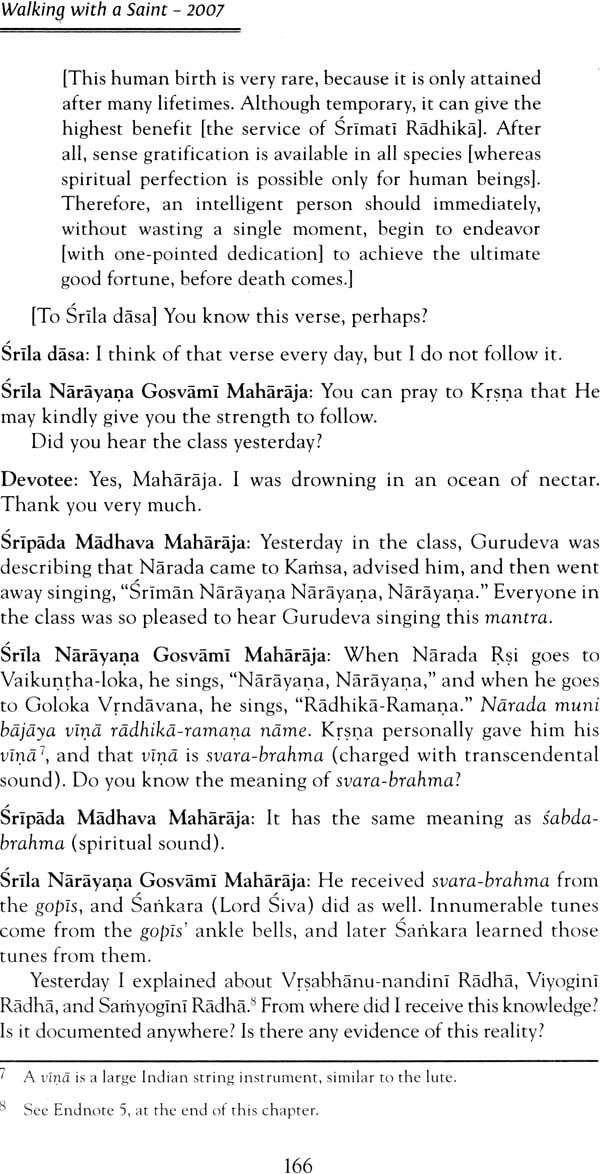 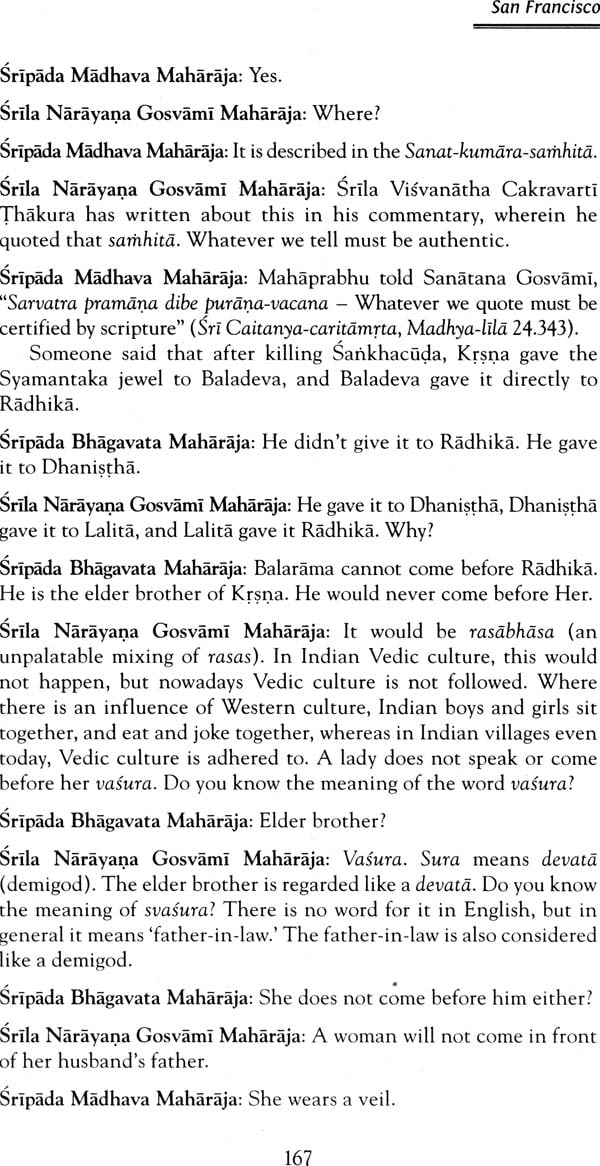 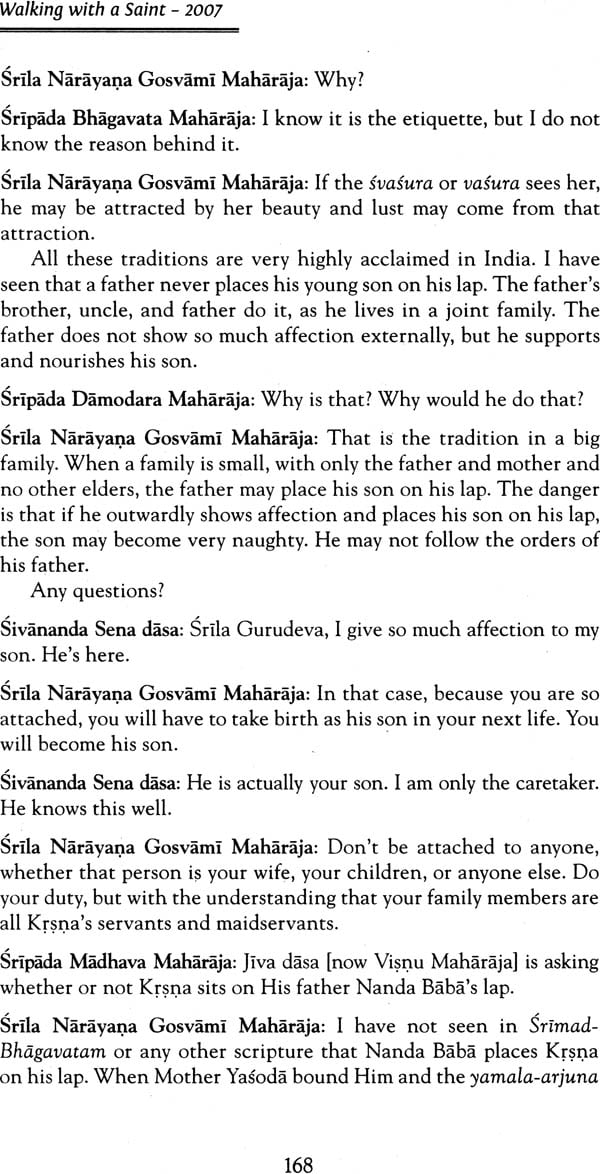 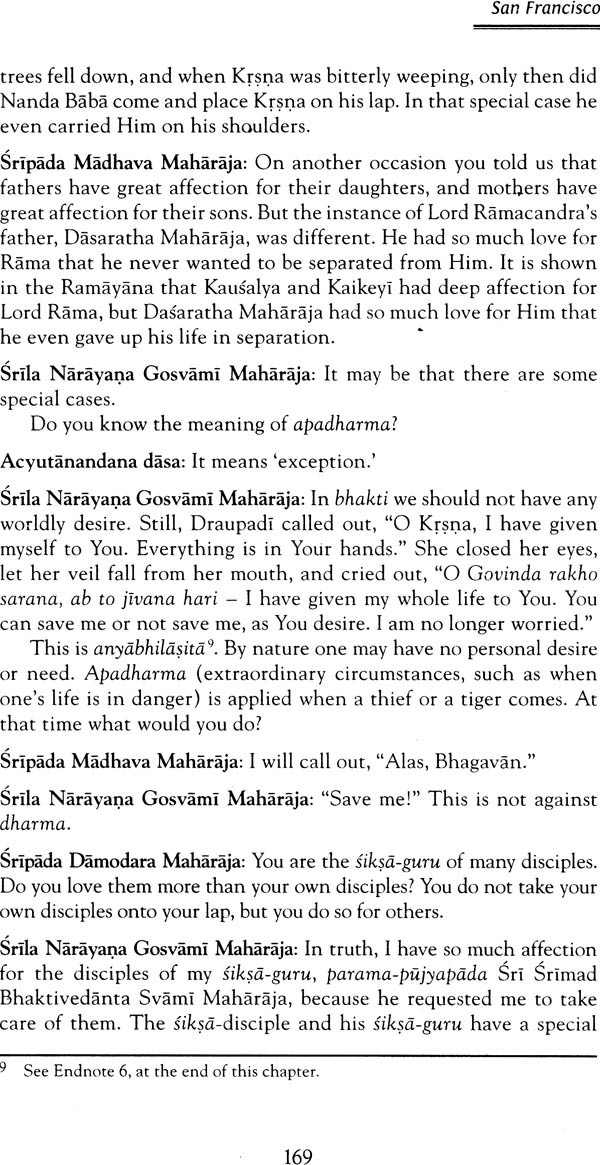 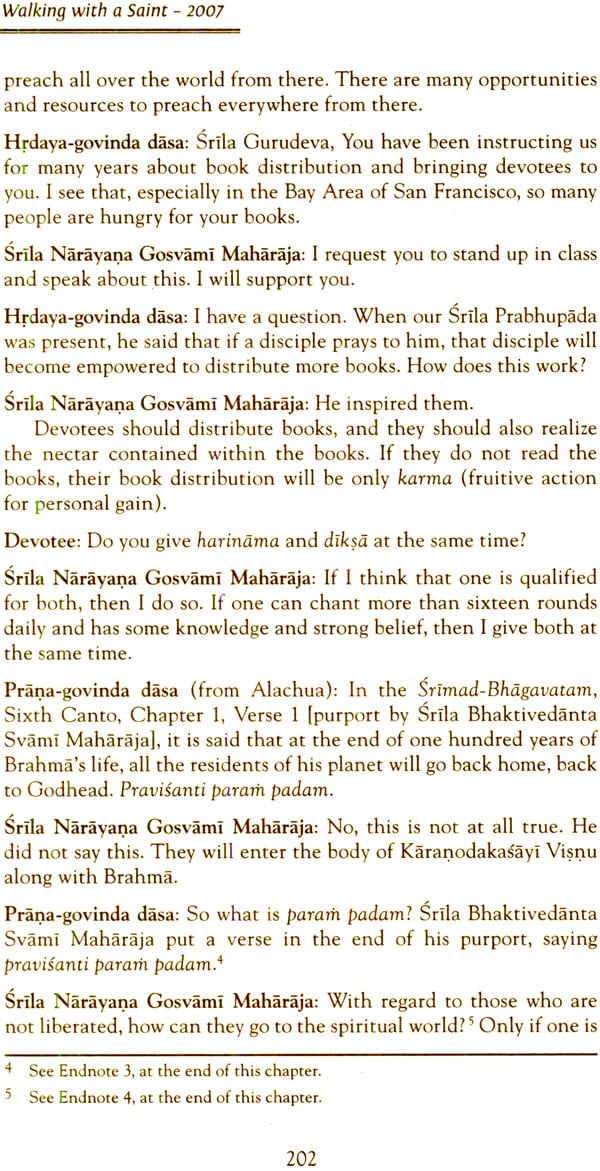 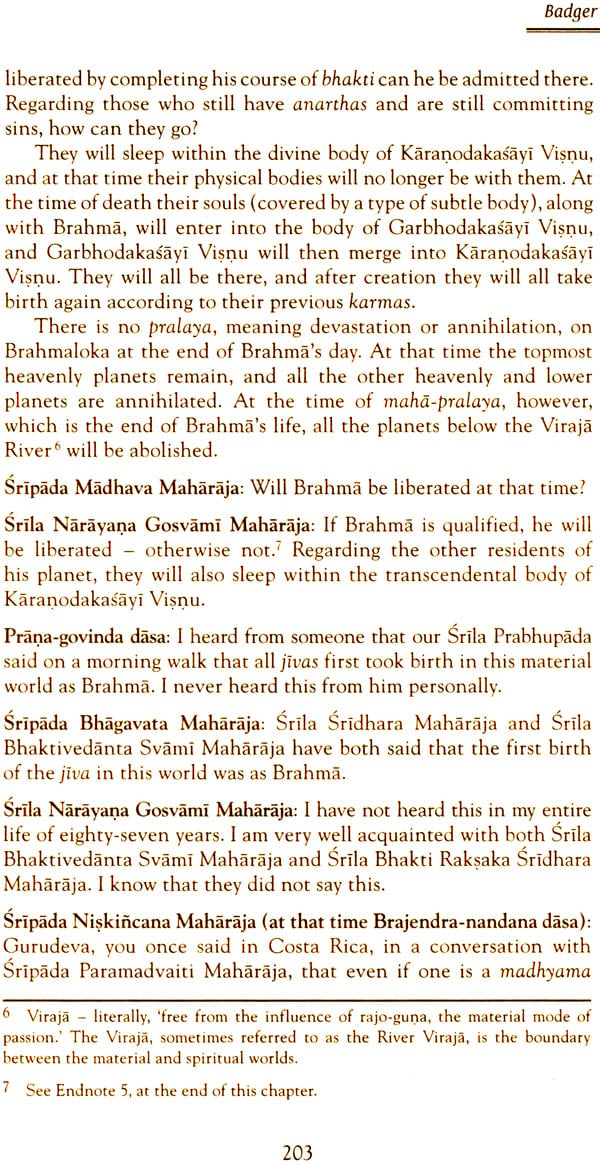 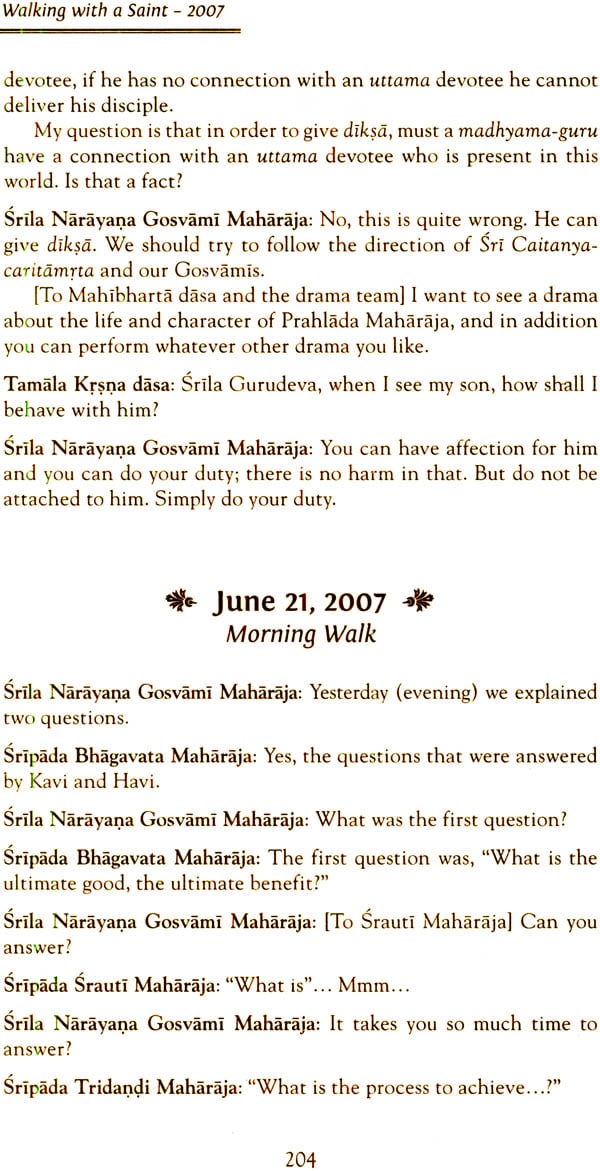 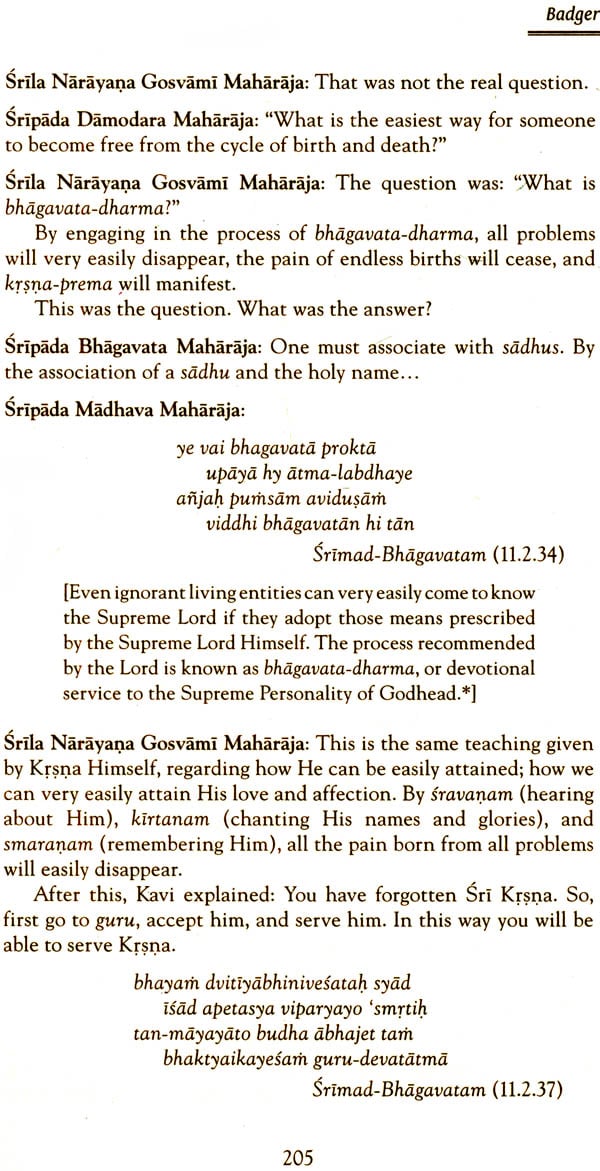 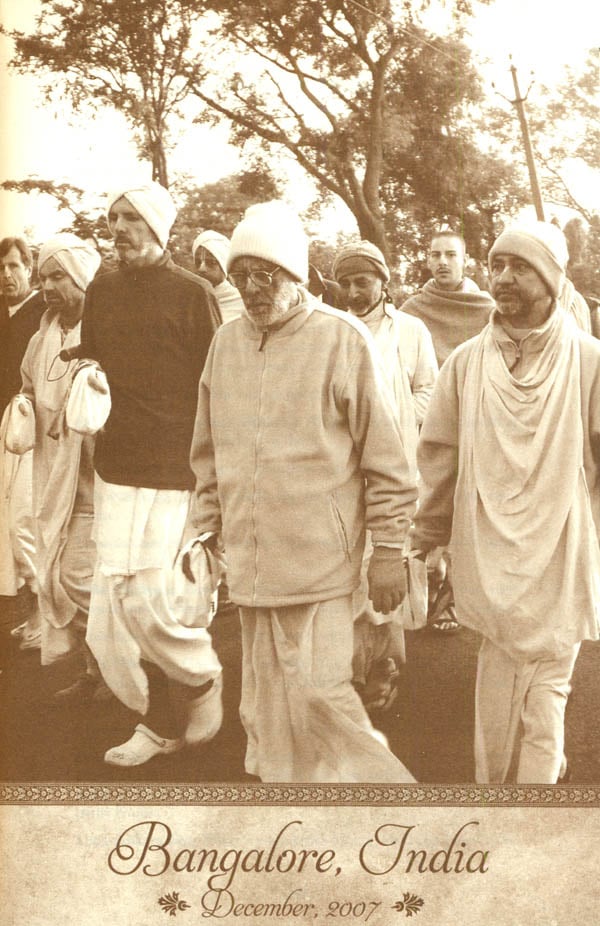 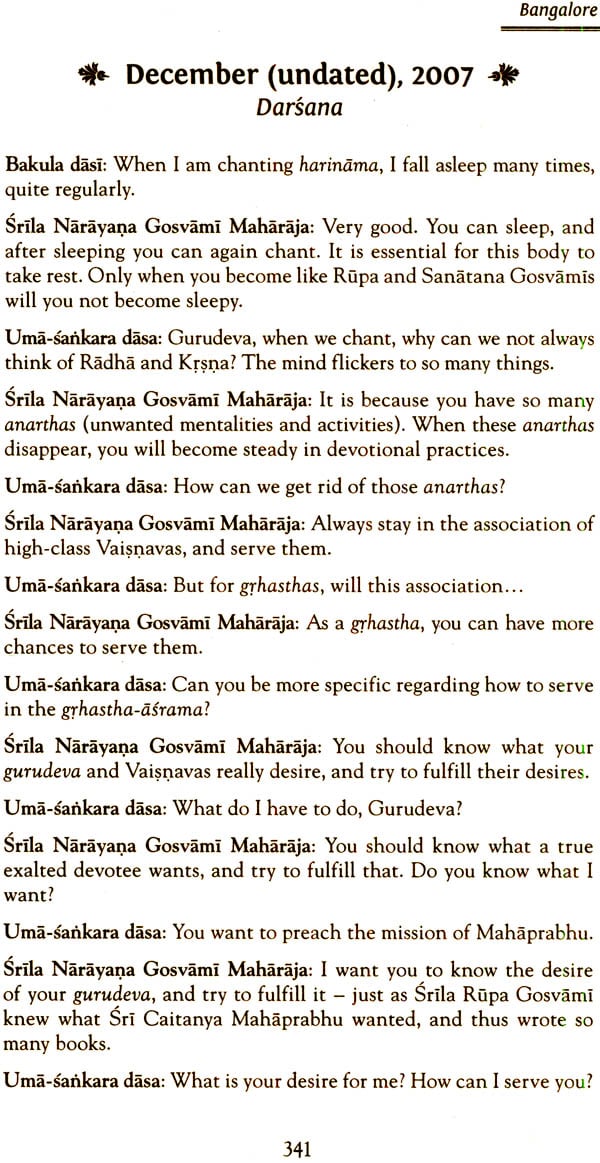 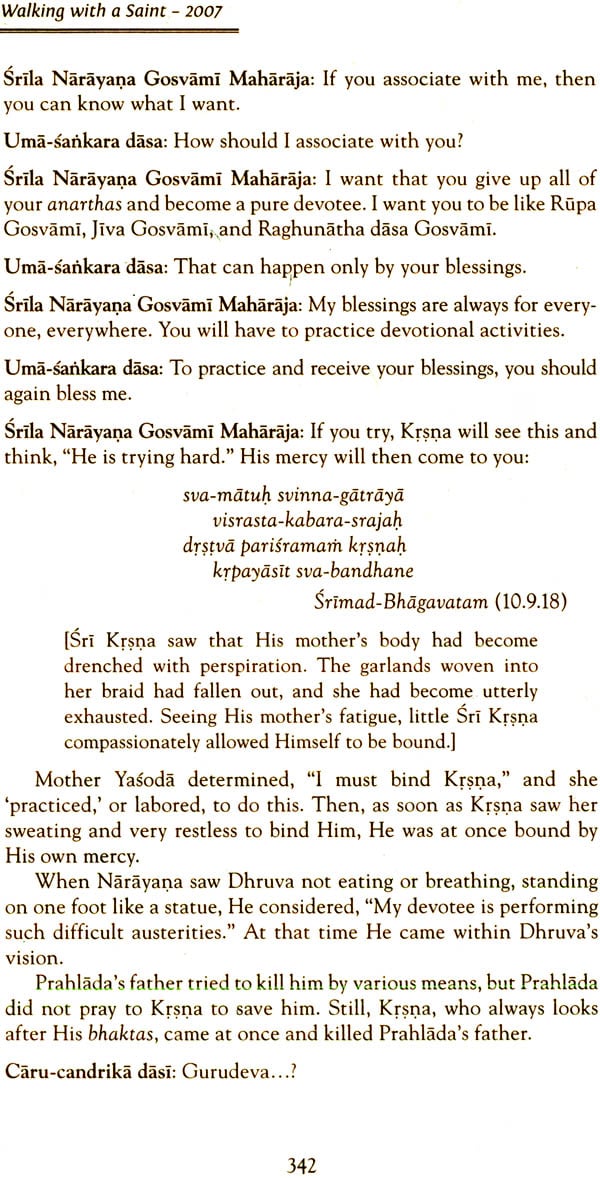 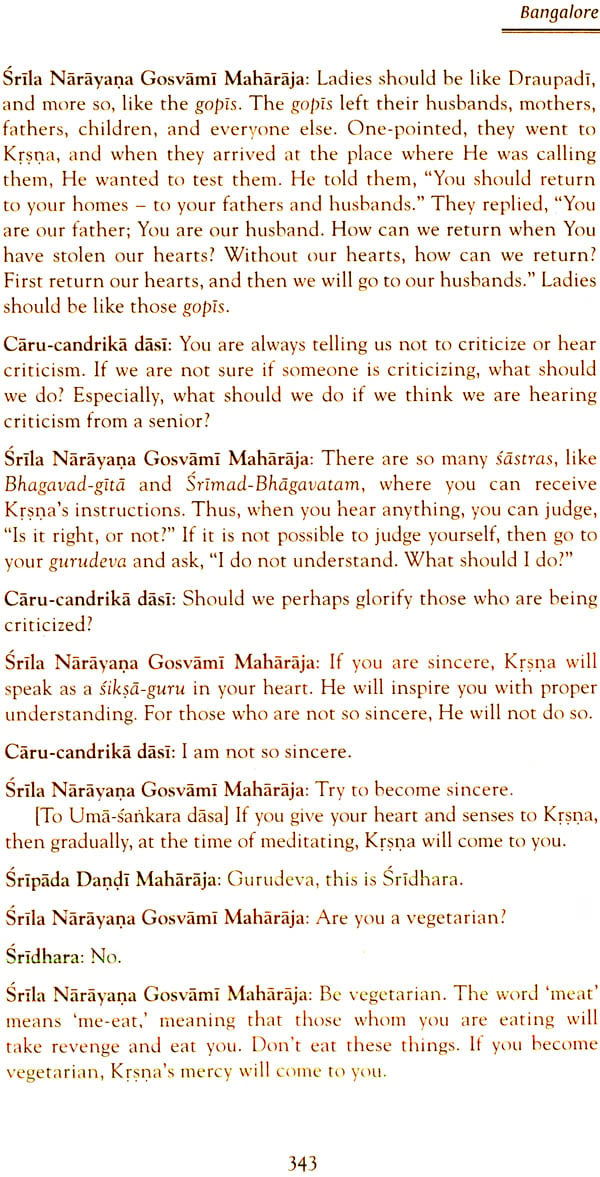 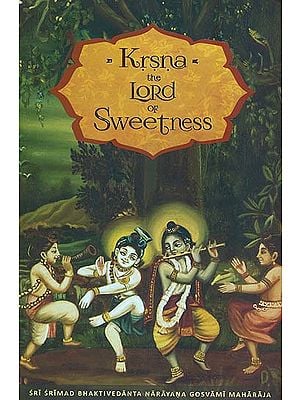