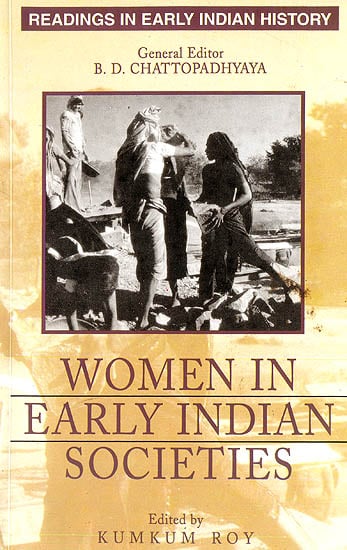 Women in Early Indian Societies is an anthology of excerpts from the works of authors who have shaped our understanding of gender relations in early India. Also included are papers which provide fresh insights or explore alternative paradigms and possibilities.

The first section focuses on the diverse issues and perspectives in women’s history so as to give the reader an overview of the implicit and explicit debates and methodological strategies and problems. Section II highlights some aspects of the material context and content of gender relations, especially in terms of property, labour, and the impact of processes such as urbanization.

Section III provides samples of the socio- sexual definitions of womanhood through investigations in polyandry and prostitution, and also draws attention to the possibility of regional variations. The last section, on religious traditions, includes analyses of the goddess cult, women’s patronage of religious institutions, and early Bhakti movements.

The Volume contains an editorial introduction which contextualizes the anthology, and a detailed bibliography.

Kumkum Roy is Associate Professor, Centre for Historical Studies, Jawaharlal Nehru University, New Delhi. Her publications include The Emergence of Monarchy in North India (OUP, 1994) and research papers. Her special areas of interest are early political institutions, and gender relations.

There are many reasons why a series of Readings purporting to introduce various dimensions of early India will only have an inadequate coverage without a volume of writings on women. It is not simply that gender today is in the air or that there is suddenly a tremendous spate of research on women. It is more the way social history is becoming more intelligible through recent studies on women than simply the quantum of writing on gender.

The dominant discourse of women in early Indian society, derived mostly from brahmanical normative texts, has remained confined to women within the household. As daughter, wife, mother and in other capacities, women constitute a practically undifferentiated group, with a fixed set of norms and duties they are seen to have adhered to. The historical perspective in this discourse is in tracing their fall from an ideal, exalted position in Vedic times, reflected in their participatory scholarly and ritual status, to stages of decline of that status. In this essentially patriarchal discourse, with women as adjuncts, it is women alone as women who seem to have been casualties of upheavals in society. As adjuncts, women are neither active agents in societal process nor can they represent variant profiles. Separate studies on women outside the bounds of family bond do exist, but it is the concern about the ‘position of women’ as such which has largely determined how women in early Indian society should be written about and generalized. This approach inevitably leads to stereotyping, and stereotyping of early Indian women has picked on the by now internalized attributes of natural physical weakness requiring male protection, deeper religiosity, proneness to impurity and so on.

That the historical perspective which has been brought to bear upon studies on women itself has its roots in the ideology of patriarchy is being recognized now. This relationship is evident from an almost uncanny consensus converging in the particular focus on women in terms of chosen themes and explanatory positions running through varieties o0f publications. The consensus would even extend to rationalization of particularly vicious modes of women’s subordination in ancient texts, which would appear incongruous to the sensitivities of sections of patriarchal elites of the nineteenth and the twentieth centuries.

The title of Kumkum Roy’s collection of writings on women is by itself a suggestion toward the need for a much larger space than has so far been accorded to women in the academic discourse. The historical experience of India, in combination with contemporary ethno- sociological realities, does indeed point to the need to explore plurality and to strive towards fresh perspectives on gender relations. If the early Marxist writings brought out both the hidden patterns outside patriarchy – dominated society as also the basic structure of the subordination of women within the hierarchized order of brahmanical patriarchy, these pioneering efforts are now being carried forward to a more refined understanding of the ‘structural framework of gender relations’. Thus, even within that segment of Indian society which is bounded by the patriarchy’s necessity to subordinate women through the social and ideological control of sexuality. It is not natural proclivities of women or their biologically determined dependence on males that would define stridharma

Gender relations in historical societies within the overarching frame of patriarchy are inevitably becoming a major focus of the social history of such societies. It is hoped that the present volume by Kumkum Roy will be received not simply as an introduction to the ‘passive’ world of early Indian women but as an essential initiatory guide to the complex social world of early India.

The inclusion of a volume on Women in Early Indian Societies within the present series is in a sense symptomatic of the position of women’s studies and questions of gender within the discipline. On the one hand, it marks a welcome recognition of the importance of this particular field of study. On the other, it also recognizes the possibility of situating women’s history within the broad perspectives of social history, which in turn permits of the raising of a range of questions.

Yet this is by no means unproblematic. Access to and incorporation within certain disciplinary spaces implicitly precludes the possibility of exploring and extending analyses of gender relations in other contexts, such as histories of the state, agrarian systems, or exchange networks for instance. While there have been attempts to contextualize analyses of gender relations in terms of specific political and economic formations (and some examples are included in the present collection), these have still not made their way into main- stream history.

One can, as has been done often enough, attribute the invisibility of such perspectives to long- standing biases within the discipline, both theoretical and methodological, as well as those of individual, predominantly male practitioners. As has been pointed out recently (Crosby 1991: 1), fascination with both History and the ‘woman question’ was typical of the middle classes in nineteenth century Britain. These were, in a sense, interrelated, as ‘man’ was constituted as the subject of historical processes, whereas questions about women were framed in terms of their nature, which was, by definition, unchanging, and hence to some extent a historical. This disciplinary legacy is still with us.

But this seems to me to provide only a part of the explanation. It is important to remember that by the end of the nineteenth century, the suffragette movement provided both a visible and vocal contestation of the divide between History and the ‘woman question’ as women were claiming access to political rights which were located within a specific historical context. As such, by the beginning of the twentieth century, spaces for investigating women’s histories were opened up.

More specifically, in the Indian context, while the interest in both History and the ‘woman question’ derived from the colonial encounter, they were also refracted in this situation. Thus, there was no simple replication of the concerns or perspectives which emerged in nineteenth century Britain. What we find instead is that both the existence and the nature of the Indian past were viewed as contested domains.

Even at the risk of oversimplification, it is perhaps worth drawing attention to the broad contours of these domains. On the one hand, the colonizers attempted to define the entire colonized population, including and especially its males, as feminine. Amongst other things, this involved denying and/ or denigrating the past of the subject population in order to naturalize and rationalize the colonial enterprise. In this situation, one of the responses of the Western educated indigenous elite consisted of attempts to reclaim and reconstitute their past.

Within this context, the discussion on the ‘woman question’, while not entirely disassociated from the problem of woman’s ‘nature’, was, at the same time, historicized. To an extent, this was related to the understanding that the ‘position of women’ was an index of civilization. We will return to the ways in which this was worked out later. What is less apparent but none the less likely is that this somewhat precocious focus on women’s history had to do with the challenge posed to indigenous masculine identities. One defensive strategy in the face of charges of effeminacy may have been to focus on the separate histories of men and women.

Thus, we have the phenomenon of the persistent visibility accorded to women within certain kinds of histories of early India. As has been stated in a different context, ‘Women made an irreversible entry into political discourse as symbolic pawns in a complex ideological background’ (Kandiyoti 1988:220) . Ina sense, this is best illustrated by Altekar’s The Position of Women in Hindu Civilisation (1938, 1978) which represents the culmination and consolidation of a definition of the ‘woman question’ which was designed to meet the requirements of a specific historical agenda. Altekar, who was a prolific scholar, produced a treatise on Education in Ancient India (1934) and another on State and Government in Ancient India (1949, 1958), apart from more specialized works. The author envisaged these, along with The position of Women, as works which would appeal to both the general reader as well as to the scholar (Altekar 1958: v). This preoccupation with the more immediate past and the present explains why such histories often end by laying down an explicit agenda for the future.

In fact, two of the three works with which we introduce the present collection, Altekar’s The Position of Women in Hindu Civilisation and Horner’s Women Under Primitive Buddhism, date to the 1930s. Neither was an isolated intellectual venture: we can trace their predecessors through the preceding decades. What distinguishes Altekar’s and Horner’s works from earlier studies is their internal coherence and the wealth of detail. As such, they have remained influential even after six or seven decades.

In contrast, much of the subsequent scholarship on the theme has tended to focus on what are relatively narrow areas of investigation, chronologically, spatially, and in terms of categories of analysis. As such, we have insights into some historical contexts, but not into others. Besides, the connections amongst the areas of investigation require to be worked out. Consequently, the impact on the discipline has tended to be fragmented, and the possibility of an intellectual upheaval remains as yet unrealized.

Most attempts at historical analyses confront and attempt to circumvent certain fundamental problems. One of these pertains to situating women vis-à-vis what are identified as major historical processes. We can observe two broad possibilities which are often combined, either explicitly or implicitly. The first envisages historical developments as by definition autonomous, and focuses on the impact they had on women. In other words, women are viewed as passive receptacles, with their ‘status’ or ‘position’ changing to reflect the state of the world around them. As a corollary, variations in the status of women are then treated as indices of relative barbarity or civilization. The second possibility, which has been articulated both less frequently and less systematically, 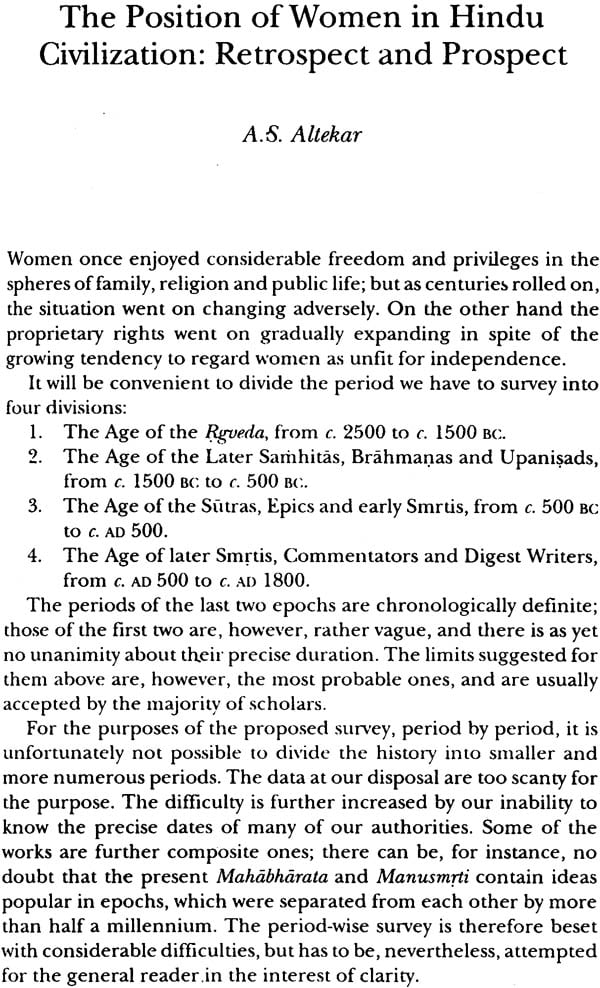 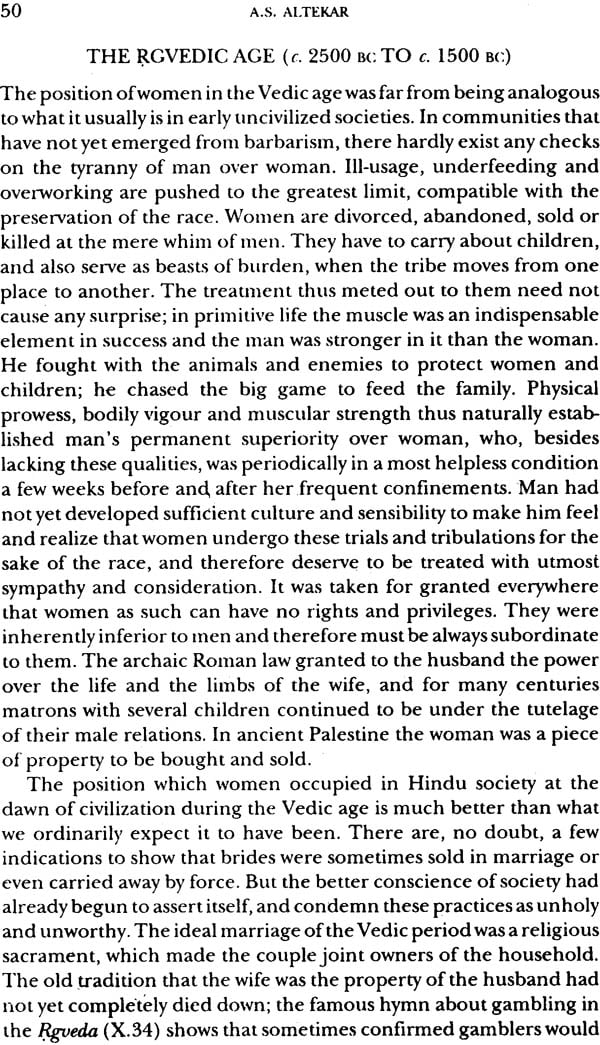 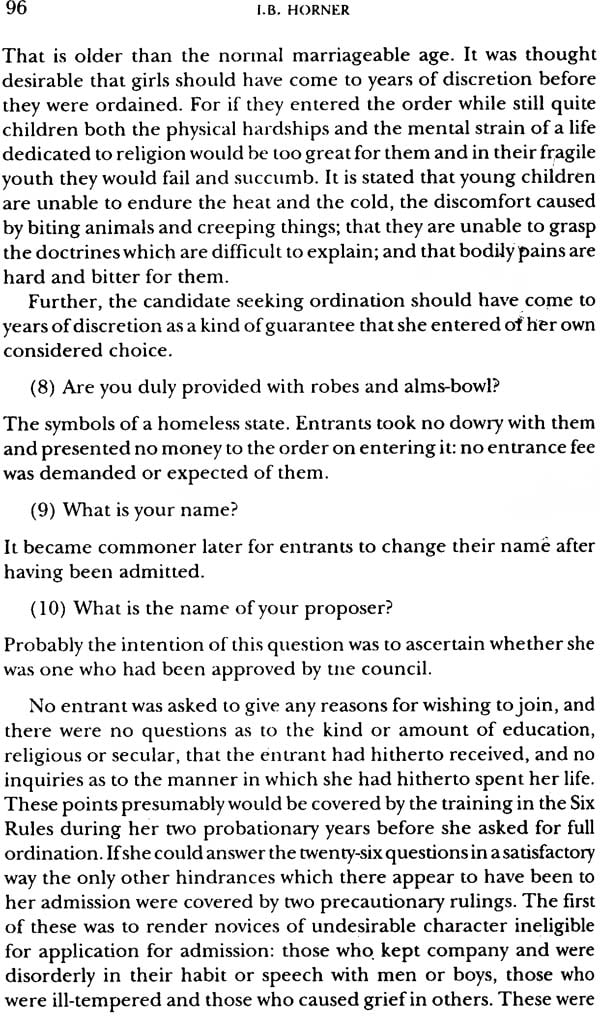 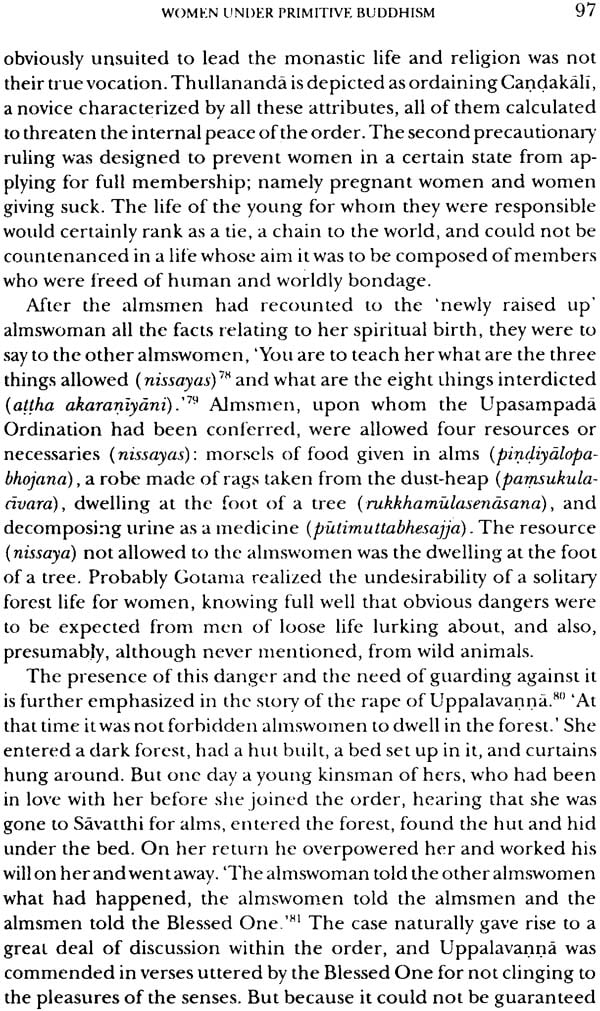 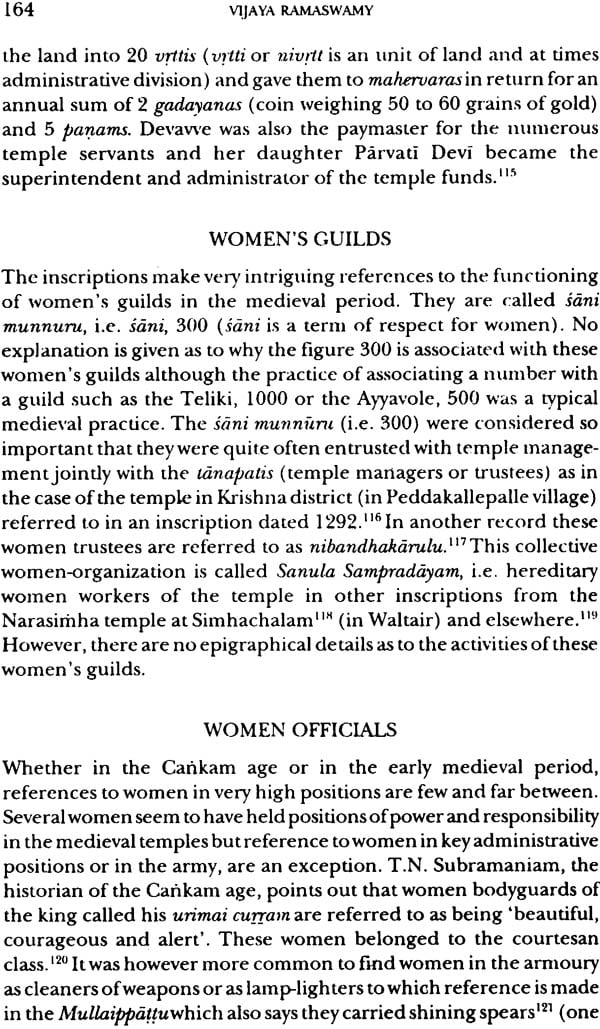 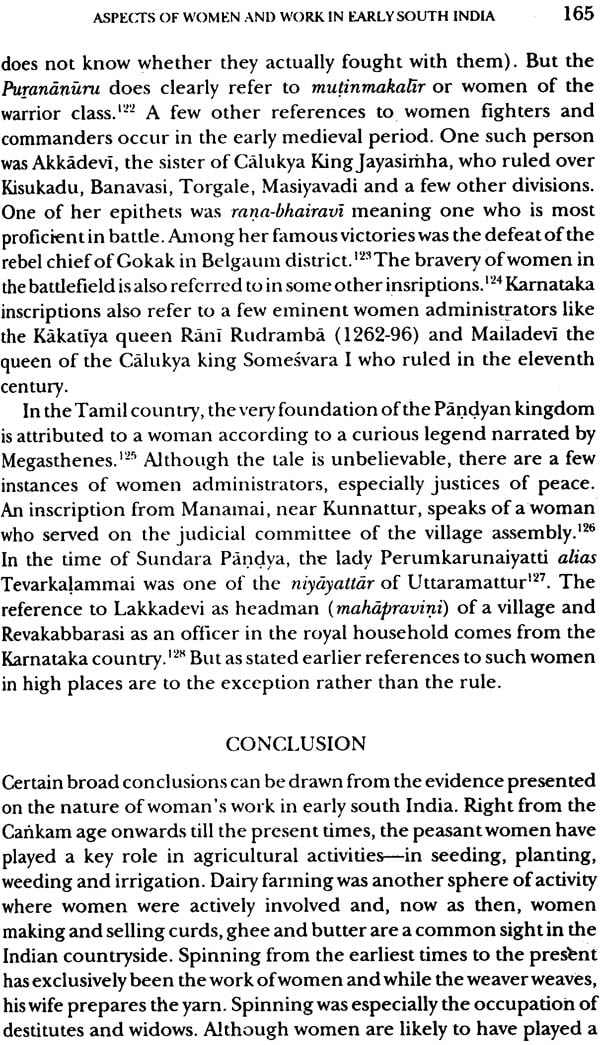 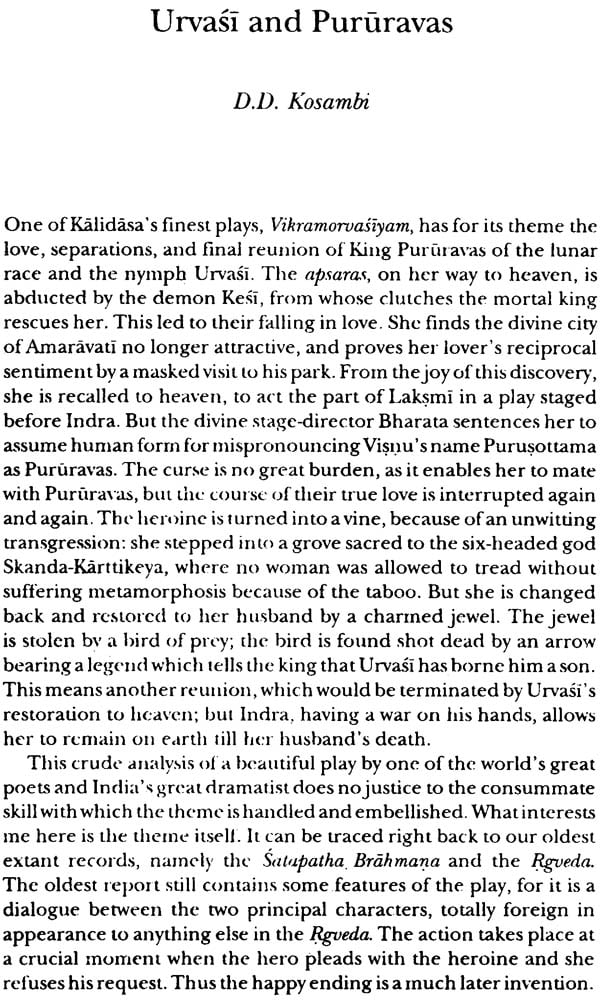 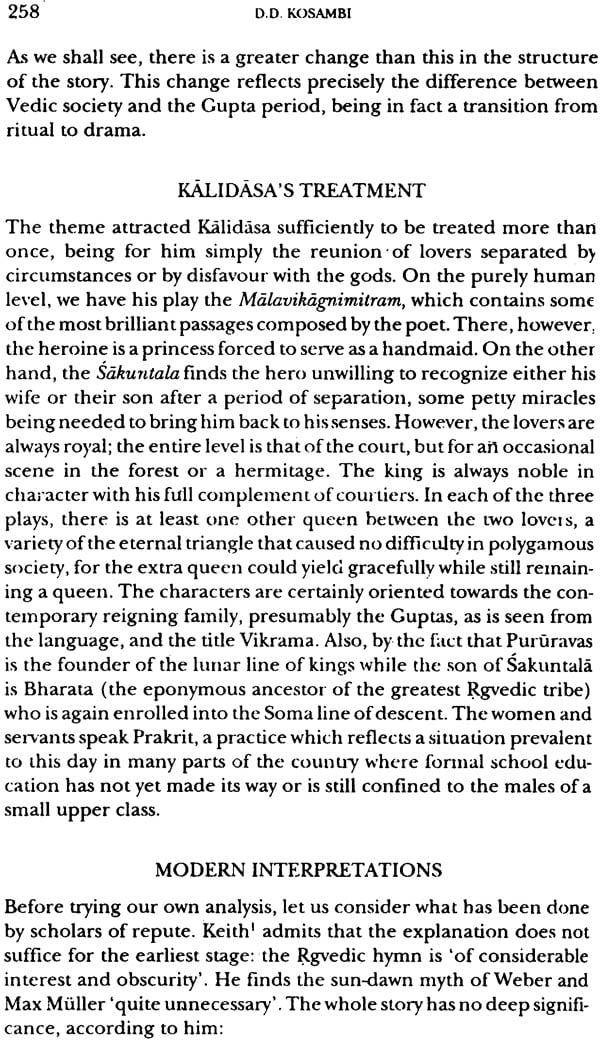 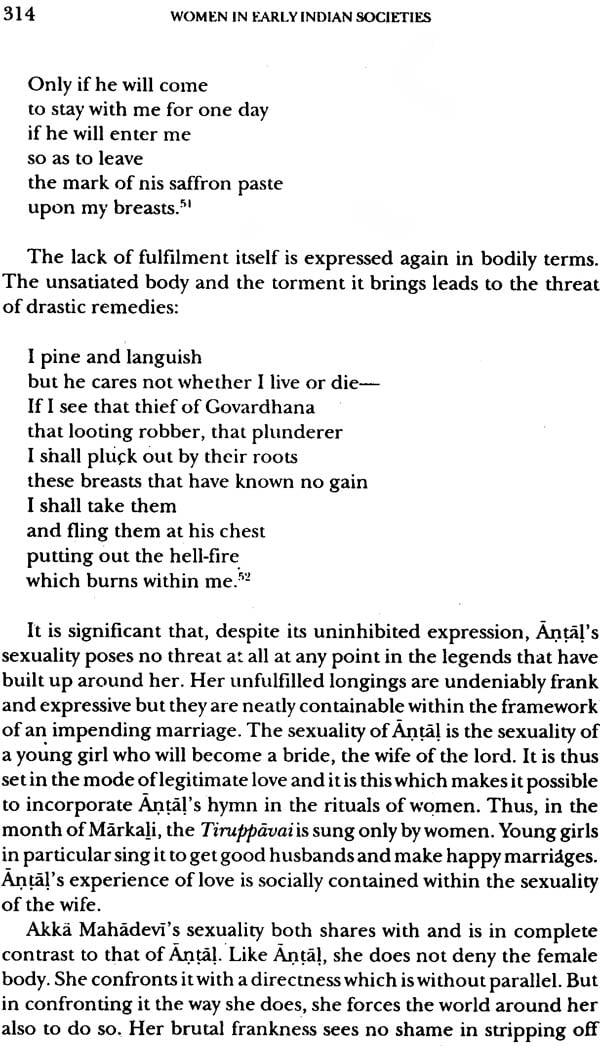 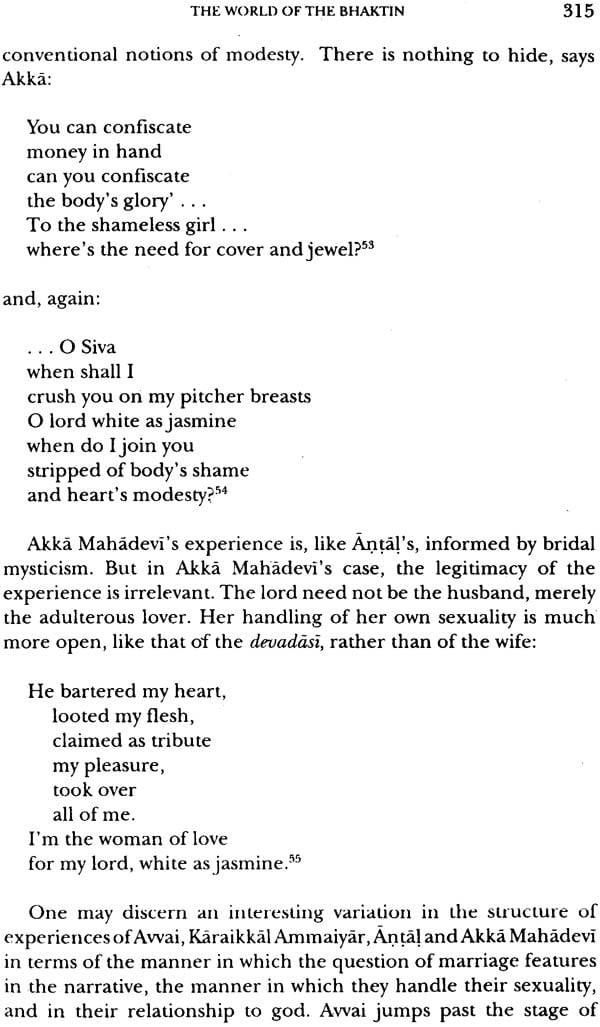 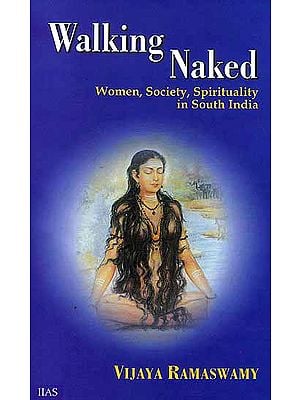 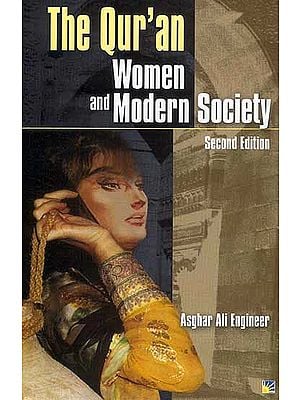 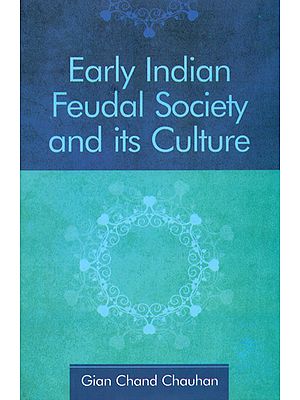 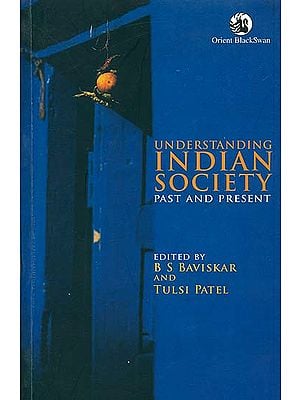 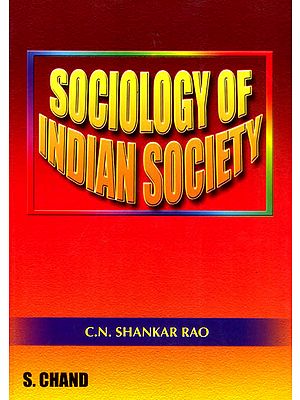 Mithuna (The Male-Female Symbol in Indian Art and Thought)
By Prithvi K. Agrawala
$52
FREE Delivery
Add a review
Have A Question