The various religions of the world have different rituals and objects used in worship. Offerings to the Divine vary according to region, tradition or availability. But one stream of thought runs through the all like a pure, flowing river. The predominant ideal behind all offerings and prayers and puja (rituals of worship), is the surrender of oneself to the All powerful, Absolute and Almighty and to seek His blessings, protection and forgiveness in our passage through life.

Many of our traditions and rituals of worship have been lost over time-victims to the drift of cultures . Today, amidst the rush of modern living. Our way of worship have become practice –by rote, without the individual understanding the actual meaning of either the object used or the ritual and ultimately, the form of worship itself. With the loss of this rich legacy of deeper meaning, puja is bereft of that special communion with God, which all humans desire.

This accessible and beautifully presented book, re-acquaints us with the meaning and purpose behind the objects we use in our puja, whether at home or in the temple, it gently informs and adds meaning and value to that most private of all human practices –Worship.

Born in the little town of Udupi in south Kanara, Meera Sashital has been freelance writer for over 5 years. Based in Mumbai, she has written for a broad spectrum of newspapers and magazines in India for a broad spectrum of from Calcutta University, circumstances compelled her to give up her ream of further education for a time, But a always ready to face life’s challenges in a positive spirit, she did go on to complete her Masters in sociology, ten years later. She also gained her Sangit Visharad from the Bengal Music College, Calcutta, and utilizing her knack for languages, she learnt both French and German.

Through the years, her love of writing has remained her abiding passion. Meera has authored four books prior to this one-Gems from Mythology; Rosary of Saints; strewn pearls and Moral Legends from the Epics and Puranas.

The trouble with most post-independence educated people, is that they have been convinced that to be’ secular is the in-thing. Never mind what is sought to be conveyed by the word ‘secular’, the average secularist presumes that to be a Hindu means being ‘ communalist’. Hinduism, in certain circumstances, has received a bad name. Hinduism, in certain circumstances, has received a bad name. Many Hindus would be chary of visiting a temple, let alone offering a puja at home. With increasing industrialization and the break-up of the joint family, even praying to the family deity or even ishata devata, has become passé. Many of the young have no time for such ‘spiritual’ exercise. It is time to go to the office. It is time to visit the Club. The young Hindu swears by secularism and in effect, rejects many traditional mores.

The contemporary young Hindu needs to be re-acquainted with his past and his Santana dharma, with all that it implies. Part of that task has been boldly undertaken by Meera Sashital. Except on certain important occasions, today’s young Hindu does not visit a temple. Of course it is not mandatory. Most homes do have their own puja space. Where possible, a room is set apart for this purpose. Prayers on ordinary days may be perfunctory, but at least they are offered. But there are certain days when the entire family- especially a joint family –gathers to offer puja and it is then that the requirements of the ritual calls for special attention. What should they be? Conconut or sprphal, is a must. To that one can add paan, supari, haldi, akshata, karpur, tulsi, kumkum and even a mirror for special occasions. A small bell is essential and if we can add cymbals it would be even more appropriate. There are other necessities to the occasion such as saligrama, Deepak to do aarti, incense, chandan and vibhuti, the sacred ash.

Since the puja is generally performed by a professional priest, he would advise on what is needed. And his recommendations have to be met in full. But of what relevance are all these petty thing which one ignores in the normal course of things? This is where Meera Sashital comes into the picture. Every object-upachara-has a meaning and relevance, even the humble mirror. For instance, the use of sandalwood paste or turmeric must be seen in their purificatory function.

From the beginning of time, Man has been filled with awe witnessing the furies of nature-lightning, fire, flood. He felt that somehow these manifestation of nature could be appeased by making offerings to them. Gradually, as civilization advanced and his own intellect grew, Man personified these elements by attributing his own human qualities to them. Fire became Agni; water was Varun; the thunderbolt was Indra and so on. Thus, based on the forces of nature and Man’s own qualities, various Gods, or deities came into existence.

Man then created images of the Gods or symbols of divinity. He treated them like living personalities and attributing his own likes and dislikes to God. He offered food, flowers, incense and other offerings to these images, as before living beings after consecrating the images. This kind of offering to divine images after consecration, became the Hindu rituals of Puja or Worship.

The images were given abhishek or the ritual bath, then dressed and decorated with ornaments. Man’s gratitude and respect for the gods were expressed by offering flowers, fruits etc. The diya or lamp was lit, representing knowledge or the seeking of enlightenment. Incense was burnt to spread fragrance and aarti was performed before the images to ward off the evil eye. Perhaps, in ancient times when there was no electricity, this also served as a light to see the divine faces of the images, in the small and dark garbagriha or sanctum sanctorum.

Today, Hindu deitiesare worshipped with upachara or articles which are the manifestations of nature or prakriti. According to some spiritual leaders, light and food signify trust, adoration, love, knowledge and identity. Hence, we offer to God these articles with complete devotion and reverence as our worship. During the puja in temple, besides the aarti, cloth, flowers, conch, chamar, etc., are also symbolically offered.

Every object termed as upachara, is offered for a particular purpose. For example, water is essential during puja or worship in order to purify the place. Haldi or turmeric, sandalwood paste, anointing, etc. all have their own significance for purification.

The characteristic offerings in puja-flowers, fruits, water, leaves, etc. were unknown to the homa or havan rite. According to scholars, puja is the pre-Aryan or the Dravidian form of worship, while the homa is Aryan. Throughout the early period of Vedic literature, there is no mention of the puja ritual with flowers etc., offered to an image or symbol of divinity.

The world puja, is derived from the root puj, and is said to be of Dravidian origin. Mark Collins suggests that the Sanskrit word puja (from which the root puj was deduced later), was nothing but the Dravidian pu or ‘flower’ plus the root’ get’ meaning ‘to do’ (palatalized to je)- found in Tamil as chey, in Kannada as ge and in Telegu as che. The puja ceremony was thus a flowers ritual, a flower service, a pushpa-karma, just as homa was described as pasu-karma the religious service in which an animal was slaughtered in sacrifice.

According to Jarl Charapentier puja was derived from the Dravidian rootpusu, meaning to smear’ –as the smearing of sandalwood paste forms an important item in the puja ritual but the use of blood from a sacrificed animal to anoint anointing stones, was later replaced by red paint or vermillion.

Different religious may have separate ways of making offerings but there is one stream of thought running through them all. The predominant idea behind offerings and prayers as worship or performing puja, is the surrender of oneself to that All Powerful, Absolute or Almighty God, in order to seek His blessings, protection and forgiveness. Instead of ceremonial worship, meditational worship is also performed by enlightened spiritual leaders- this is known as Manas Puja.

Without going too much into detail, I have tried to explain the essentials or main items used in traditional worship. I hope my readers will find it informative and beneficial in their own worship and surrender to God. 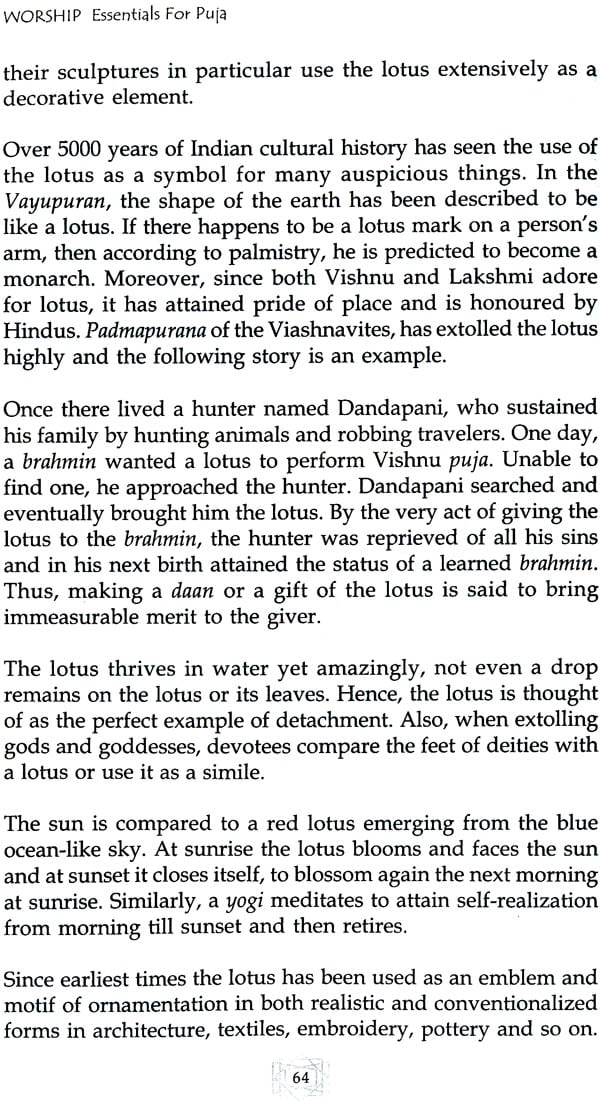 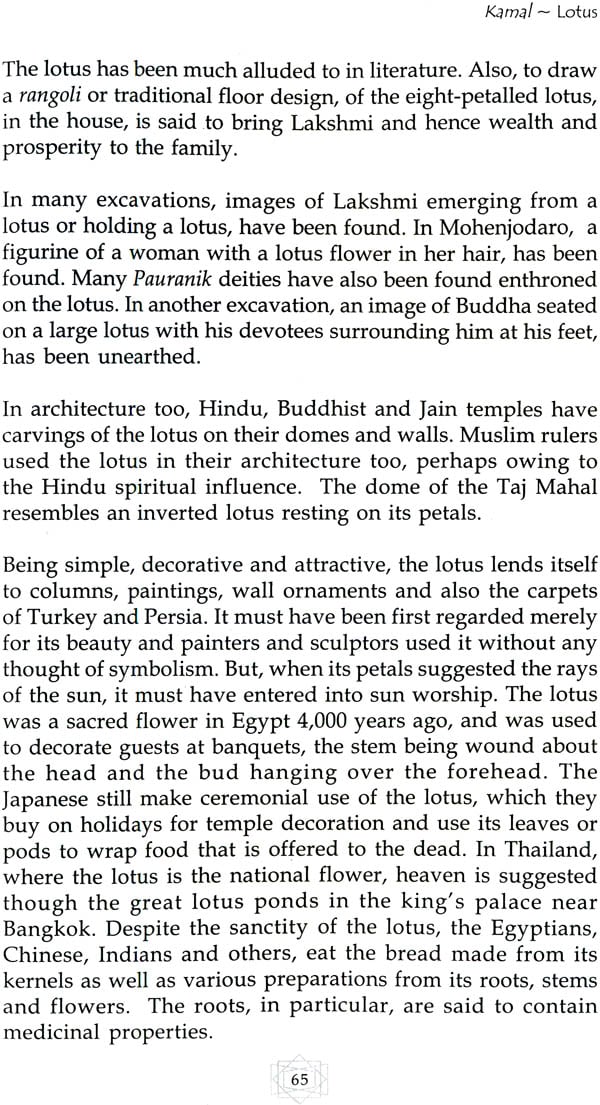 In the Name of the Goddess (The Durga Pujas of Contemporary Kolkatta)
By Tapati Guha-Thakurta
$94.50
FREE Delivery
$105  (10% off) How to Perform Puja of Lord Shiva: An Illustrated Guide (With Transliteration)
By Meenakshi Balu
$11
Out of Stock