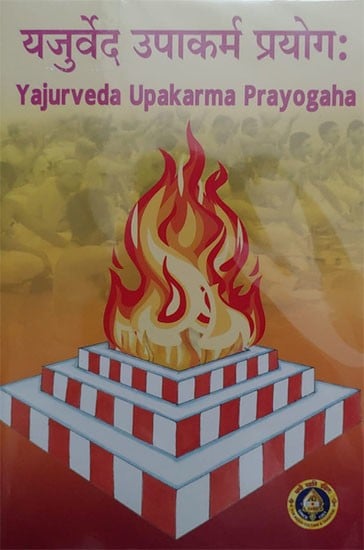 Vedas proclaim that human birth is the greatest blessing that one can receive as the most precious gift from God Almighty.

The creation and the sustenance of the entire universe according to our Sanatana Dharma is by the tenets of the Vedas, the Authority & Omniscience of which is unquestionable.

The study and propagation of these Vedic texts are the most prominent thought that occurred to the Rishis, who revealed these texts. Among these Seers(Rishis), the place of Sri Veda Vyasa is supreme most, who also edited and saved the Vedas for the posterity to benefit.

To show our eternal gratitude to sage Veda Vyasa and the other Rishis and also to fulfill our duties in preserving the vedic heritage, on the full-moon day of the Shravanamonth we are expected to undergo the Vedic Rite called Upakarma.

It is also true that having born as a human we are supposed to perform certain activities(karmas) which shall help us to retain the elevated status of human birth .These activities are classified as Nitya & Naimittika & Prayashchitta Karmas.

Nitya Karmas are those which one has to perform on a daily basis. Karmas like Sandhyavandana, Deva Puja etc., belong to this category.

Naimittika Karmas are prescribed as according to different traditions(sampradaya). Karmas like Vrata Poojas, Shraaddha karmas form this category.

Prayashchitta karmas( expiation) are those that we need to perform in order to offset or nullify the consequences resulting gon account of our not being able to perform the Nitya and Naimittika karmas perfect.

One such Prayashchitta Karma is Upakarma which is performed by everyone who is initiated into the sacred rite called Upanayana(Thread Ceremony) through which he is conferred with the merit to learn & practice the Vedas (VedaAdhyayana).

This book titled "Yajurveda Upakarma Prayogaha" (Aapastambha Sootra tradition) is the sincere effort on the part of GIRI which is known for its reputation of rendering its service to mankind by publishing Spiritual, Religious Books in various languages and making them available to common man through its various outlets.

The entire procedure of Upakarma beginning with Kamokarsheet japa, Mahasankalpa, Yajnyopapaveeta dharana, Adhyayana utsarjana homa, Vedarambha, Jayadi homa and the Gayatri homa/japa (which is to be performed the next day) is step by step instructed in a very simple way to help one to perform all the prescribed karmas perfectly.

The original Text has been given in both Sanskrit as well as English and the Instructions in English especially to benefit the younger generation who are more comfortable reading the Text in Devanagari(Sanskrit) or English Language.

We sincerely thank Shri. Kethu. Ramachandrasekhar for his efforts in contributing the English instructions in the book.

We are sure that this sincere and dedicated attempt of us (GIRI Trading Agency Pvt Ltd) to the cause of preservation of the Bharateeya Sampradaya by publishing this book YajurVeda Upakarma Prayogaha, shall once again benefit one and all and leave us with the humble satisfaction of achieving yet another milestone in our goal "Sarve Janaah Sukhino Bhavantu". 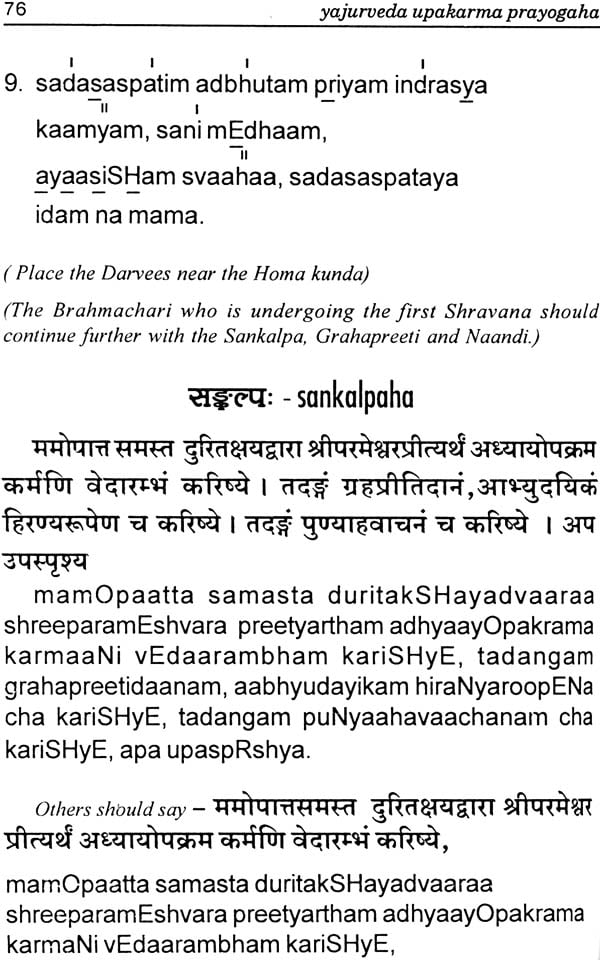 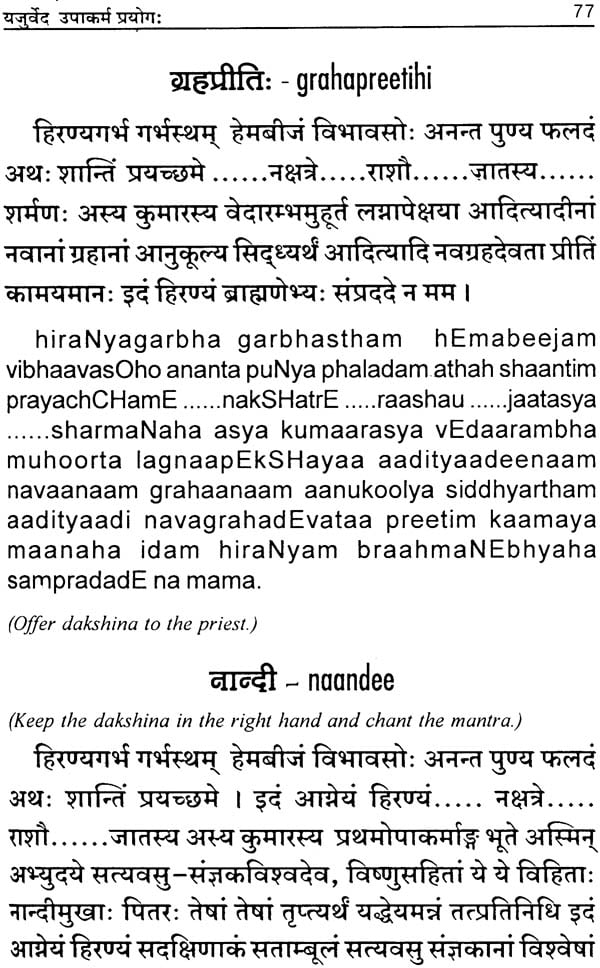 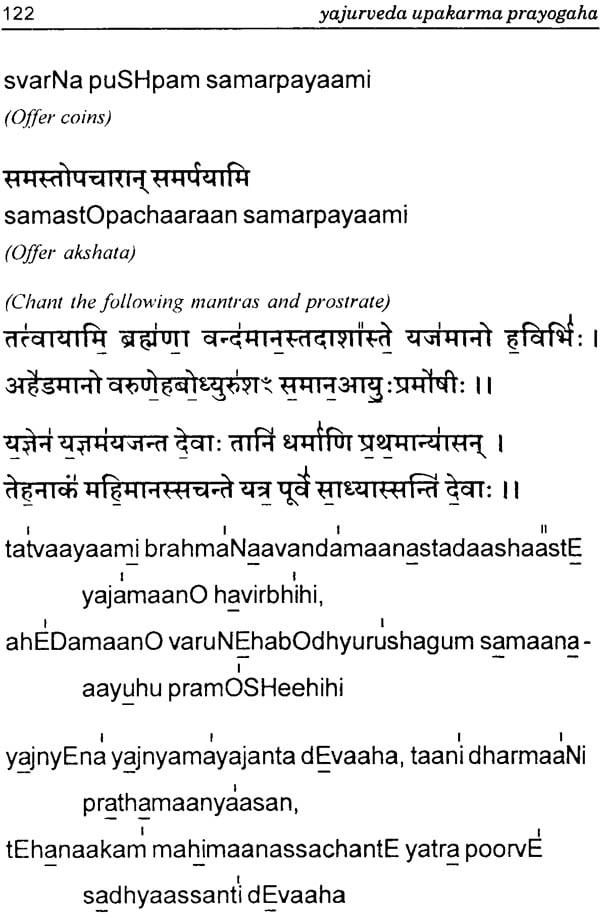 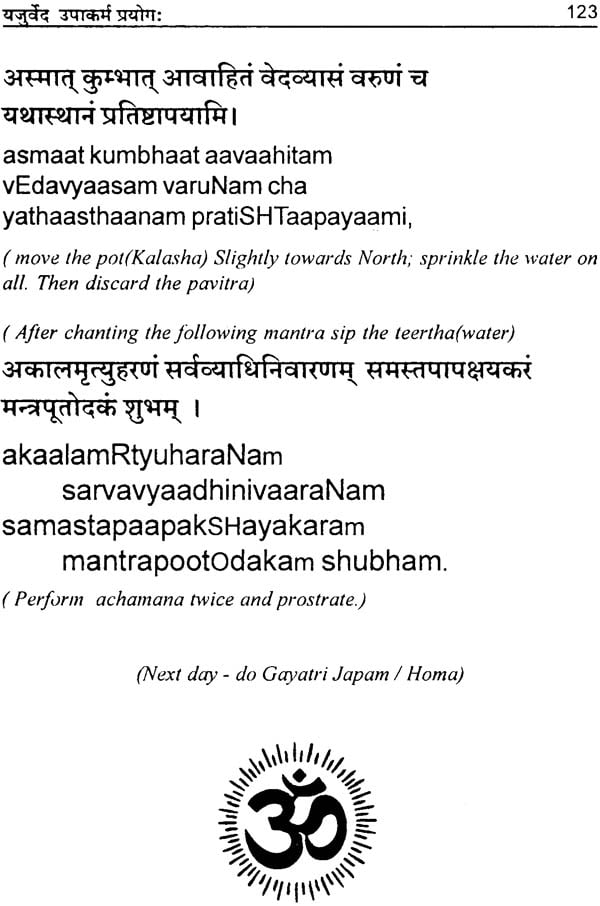 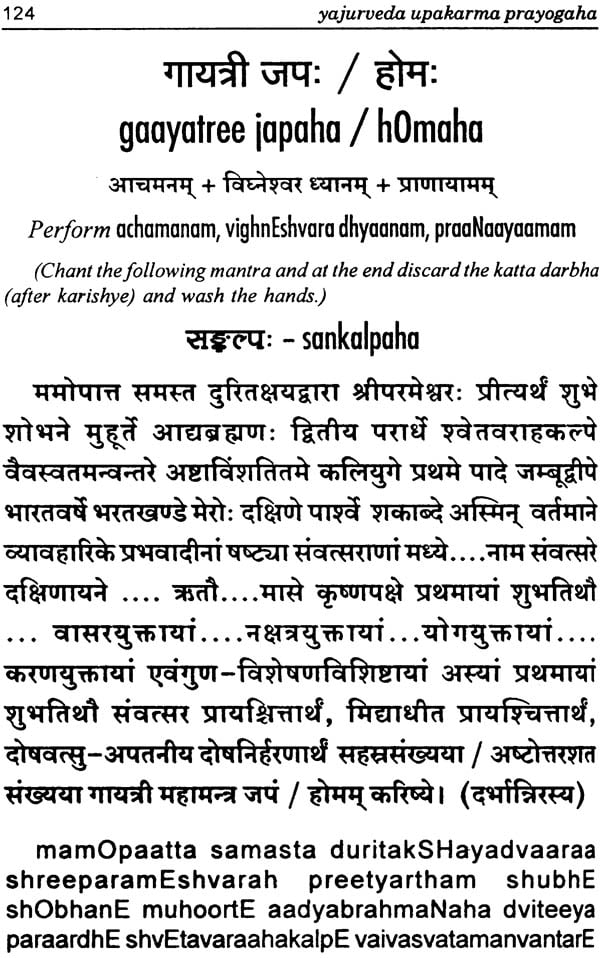 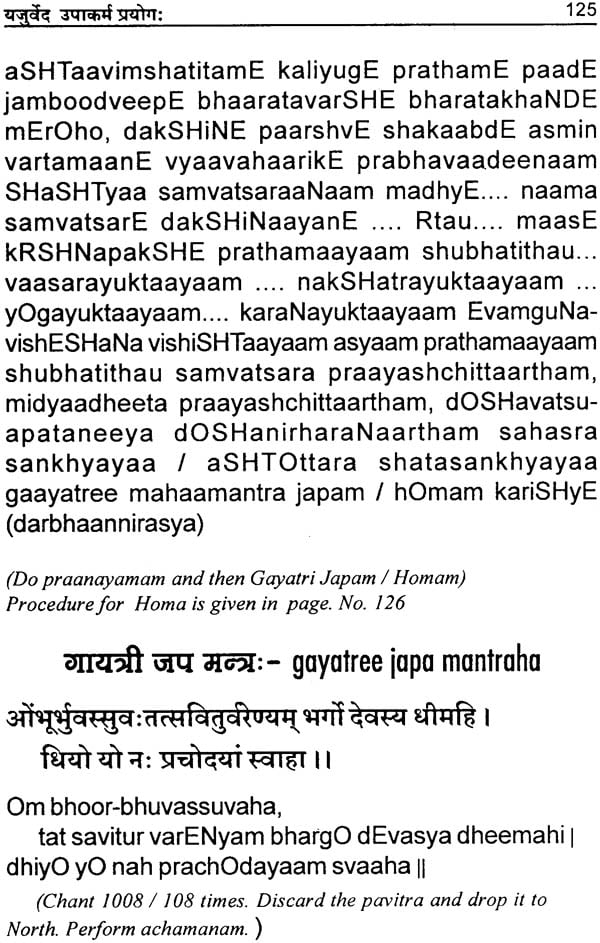