· This book presents a study material with the updated syllabus of NET/JRF conducted by UGC. · The book is helpful anyone appearing for the PG and Ph.D. entrance exams as well as the UGC-NET/SLET, and QCI tests. · This book has a wide range of well-designed multiple-choice type questions rooted in ancient texts and interpreted by modern thinkers. · This is an easy-to-follow yet authentic book focusing on the recently upgraded and updated syllabus with 10 units. · The nature of questions is information level, analytical skill and comparative ability as required.

Dr. Kavita Bhatt was born in Tehri Garhwal (Uttarakhand) in 1979. She studied science early in life and later obtained master degrees in Philosophy, Yoga, English, and Social Work. Her doctoral thesis in Philosophy explored yogic practices as described in Gheranda Samhita. She qualified the UGC-NET exam in the subjects Philosophy and Yoga.

She has been awarded JRF, GRF by ICPR, New Delhi and PDF (Woman) by UGC, New Delhi. Dr. Bhatt has authored more than twenty books, several of which are recommended by universities as a part of curriculum. Her researches include the applied, philosophical, psychological and spiritual aspects of various yogic practices. Dr. Bhatt has been a prolific writer and orator. She has published hundreds of pieces including research papers, popular articles etc. She has also been invited for lectures, thematic talks, panel discussions, and poetry recital by various foreign platforms, ministries, Govt. of India, Sahitya Academies, AIR, and DD. Dr. Bhatt has been conferred various awards from International and National agencies. She has been nominated a member of Program Advisory Committee by the NCSTC under the Ministry of Science and Technology, Govt. of India. She also carries successfully the responsibility of the National General Secretary of Unmesh.

I bow to the feet of omnipotent and omnipresent Goddess Yogamāyā who nourishes the universe with the nectar of her divine love. According to Durgāsaptaśatī, it is believed that the same Bhagavatī Yogamāyā is present in all beings of the universe in the form of the Manas and Budhhi. Owing to the highest level of intelligence, human beings are considered to be the supreme worldly creation of nature among all organisms. There are eighty-four lac Yonies in the universe and human is the only organism gifted with the ability to get rid of the Triduhkha (three kinds of sufferings) as defined in the ancient texts of Hindu tradition and civilization. It is called Kaivalya/Mukti/Apavarga in Yogic texts. As a matter of fact, the harmony of Manas, body and Atmā is necessary for the Kaivalya.

Logic, ideas, worldly knowledge, techniques and inventions are the mechanical aspects of human nature; but the journey of spiritual well-being begins where all these limits transcended. Indian mystics have discovered Yogadarśana as a science which works according the intensity of self-discipline through Abhyāsa (practice) and Vairāgya (detachment). Yoga is the best practice and discipline for ultimate well-being. Therefore, it is the need of the hour to follow the yogic practices according Yogadarśana properly. Here, I think it is necessary to draw attention towards some facts in this regard. In the present age, the material prosperity is most desired phenomenon, but we are still struggling with many physical, mental and moral anomalies. There are several reasons for this; but the biggest reason is the lack of practical subject for inculcating moral values in the education system.

From this point of view, Yoga (theory based practice) should be included in the entire education system. However, it has now been included as an independent subject in higher education but there is still a need to implement it multi disciplinary and multidimensional ways in the institutional and educational levels. Introduction of Yoga as a subject in undergraduate, postgraduate and Ph.D. courses has brought a significant change in higher education at both the ethical as well as professional levels.

It is noteworthy that besides nurturing moral values, Yoga has also secured its special place as an excellent academic discipline and professional subject, globally. It is a major factor in attracting millions of foreign citizens towards India and every year, a large number of foreigners come to India for learning, practicing and experiencing Yoga. Also, a large number of Indians go abroad as Yoga-teachers and instructors.

I know the Dharma though I don't abide by it. I know Adharma though I can't be enough of it. O Revered Svāmī lī! While residing in my heart the way you have engaged me, same way I work!!! Since ages Yoga is part of traditional studies of Bhārata. No matter which school, cult or tradition you pick, you will find that Sādhanā part of it is purely Yoga. Thousands of scriptures are found in this country who primarily tell you the benefits of Yoga and how to do Yoga. Even the Karmakāņda is Yoga as it is playing role in uniting its doer with goal.

This way, with Yoga all around, it would be impossible to understand the Bhārata Vidyā or precisely to be a Bhāratīya if Yoga is not adhered.

It was a need of time that Yoga shall be studied as a regular subject as, this is best preventive action humans can take. Not only at the level of prevention, Yoga plays vital role in correction of health be it physical, mental or Adhyātmika. The onus was on U.G.C. and U.G.C. came out with the best efforts where the organisation has designed the syllabus of Yoga and has inducted it formally in NET. This is just a beginning and soon we would see so many Yoga faculties around.

While translating this book I was restricted to verbal translation only, by publisher though then also being a seeker of Yoga I have a few observations which I would like to share with U.G.C. as a request. 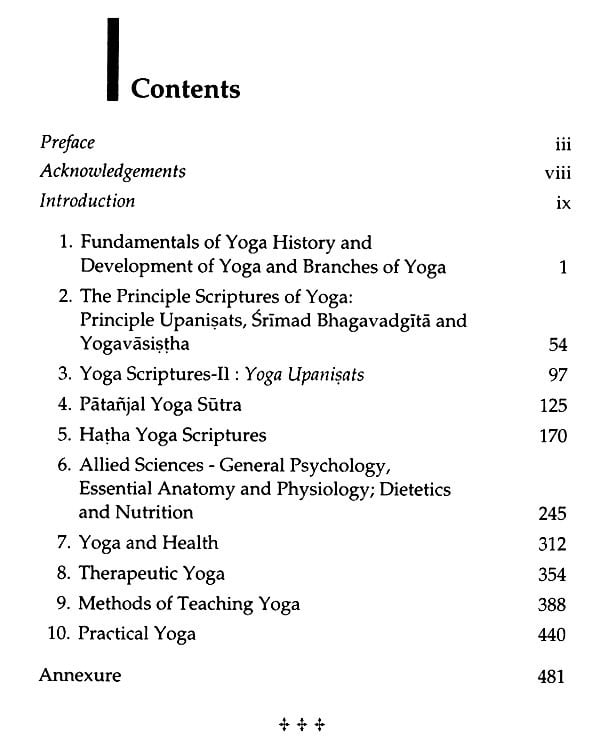 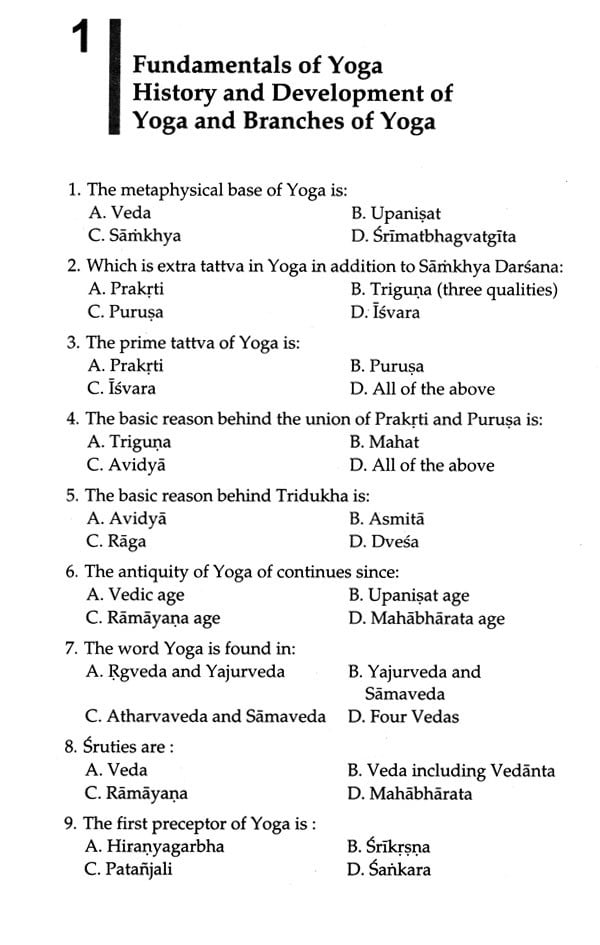 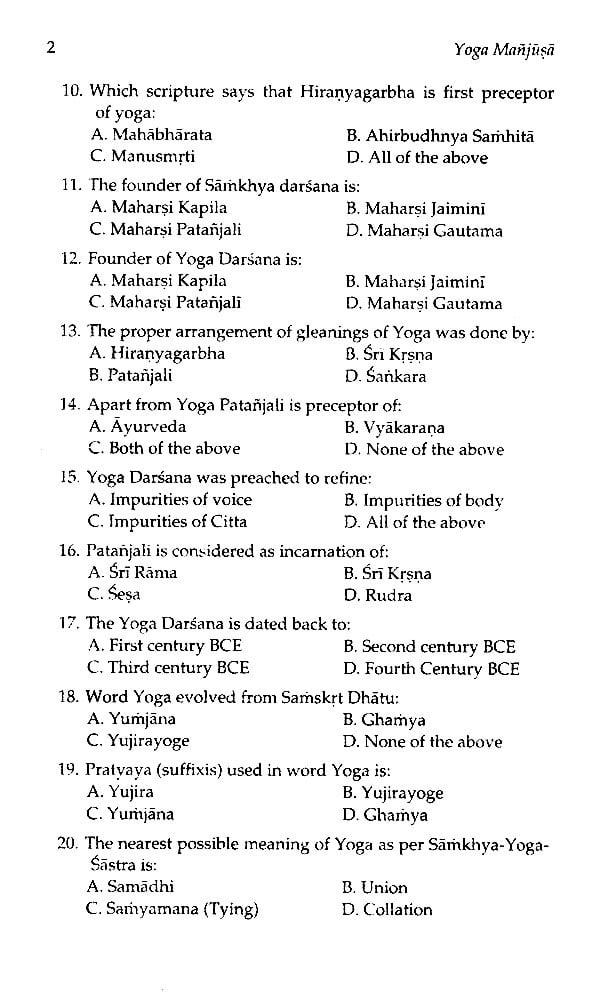 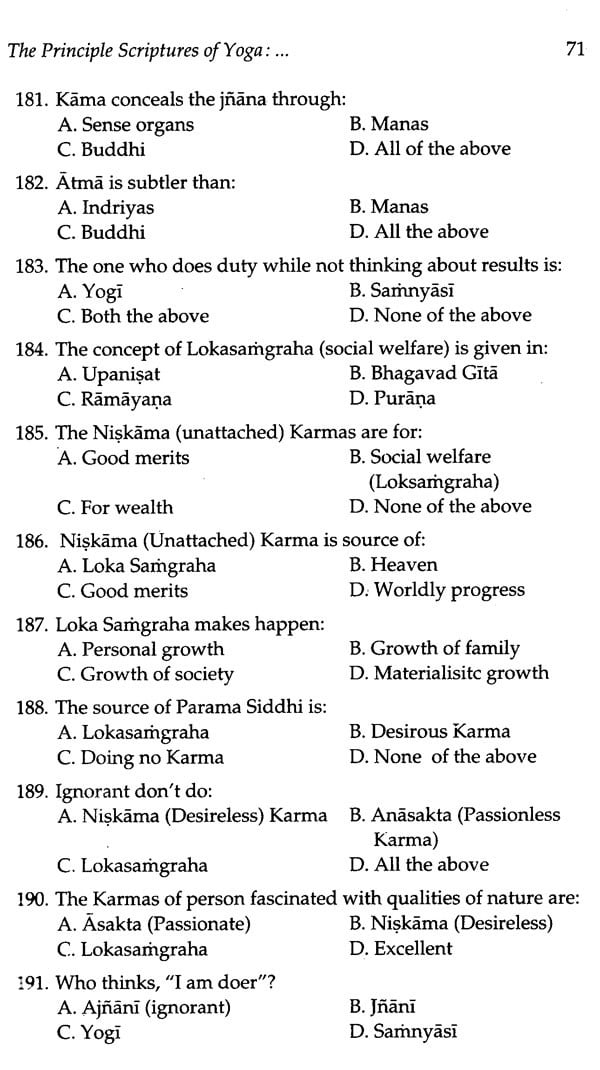 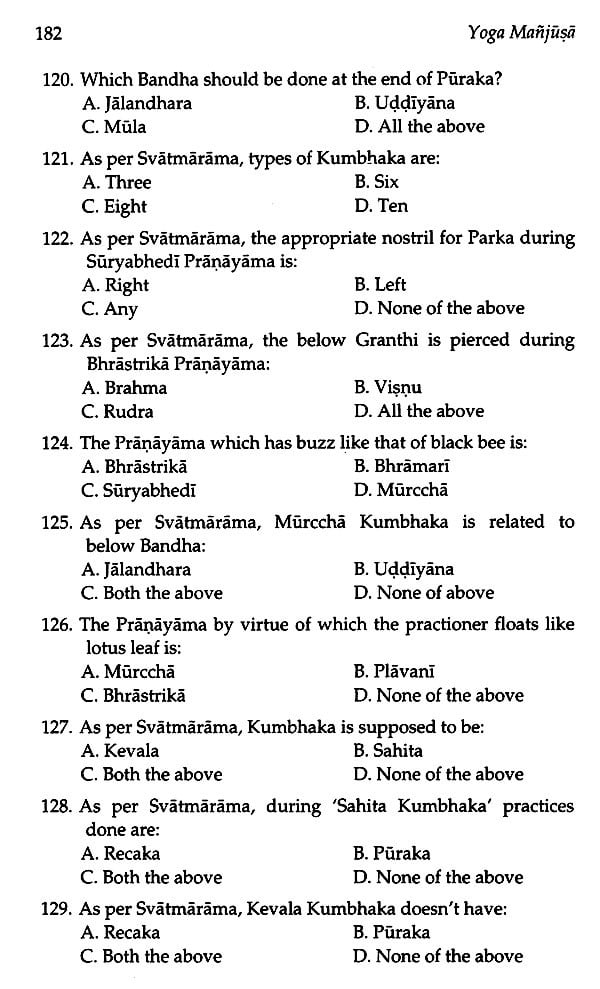 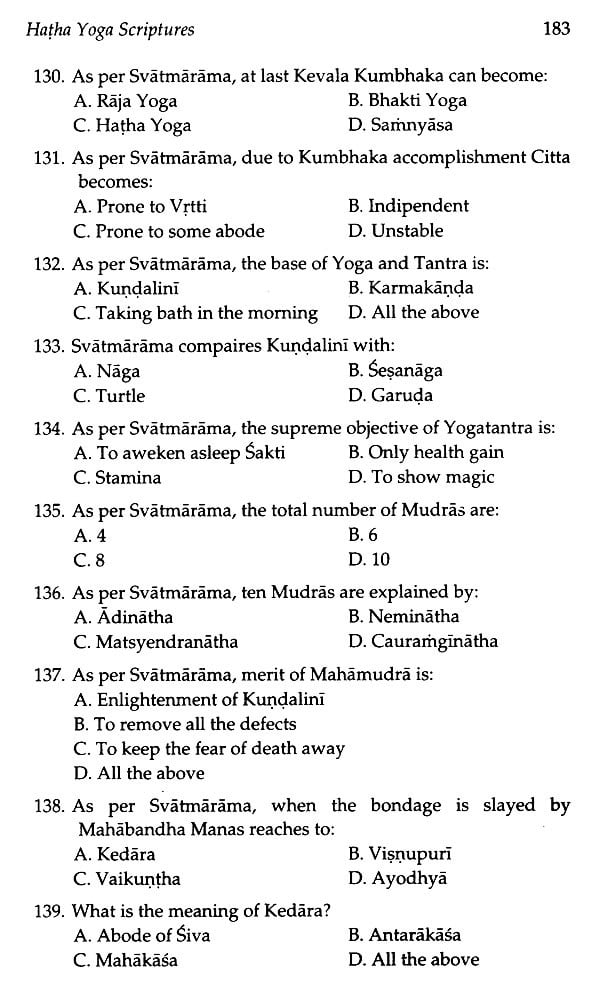 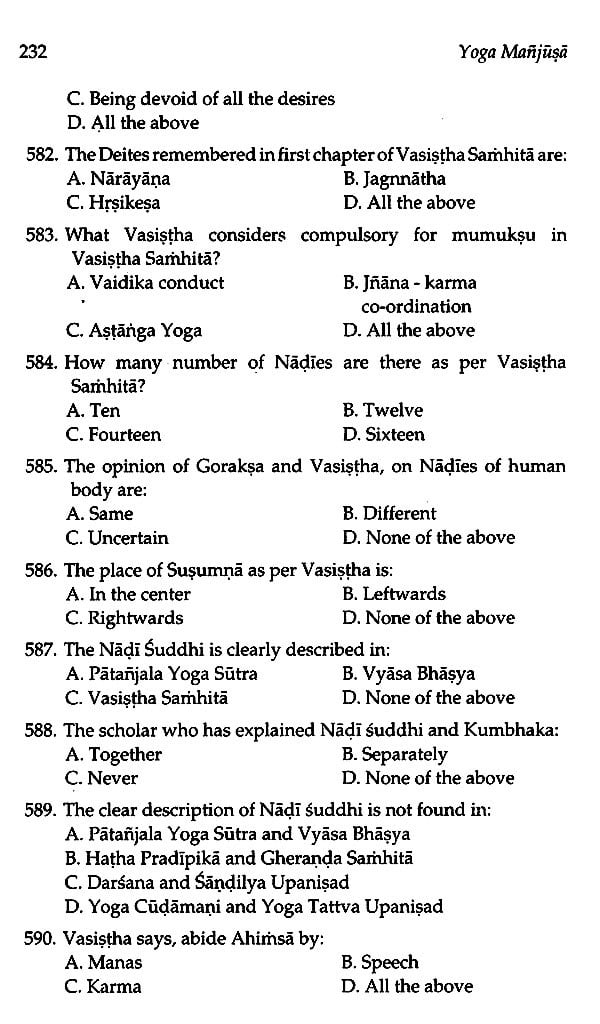 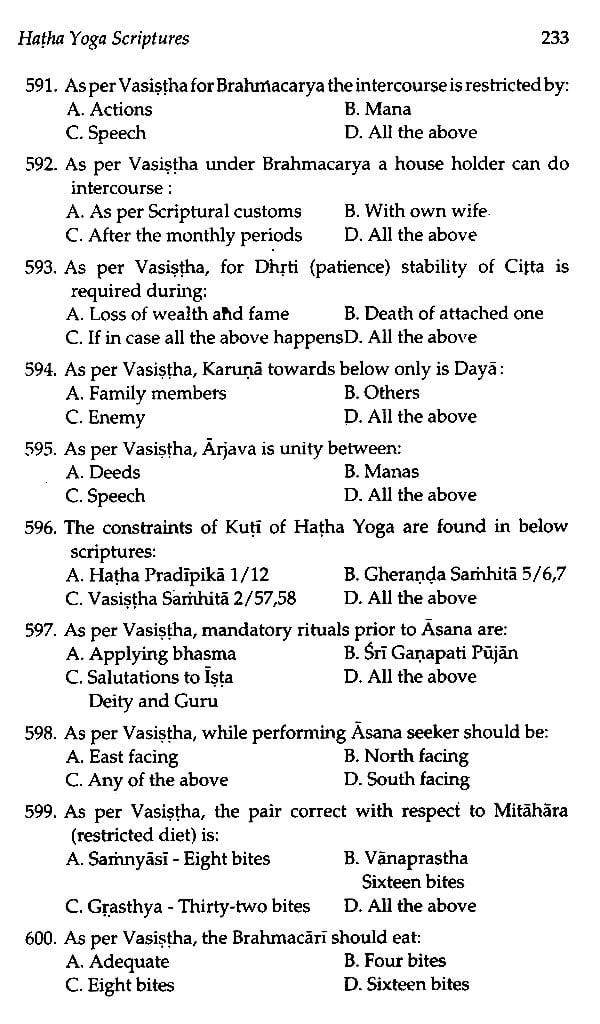 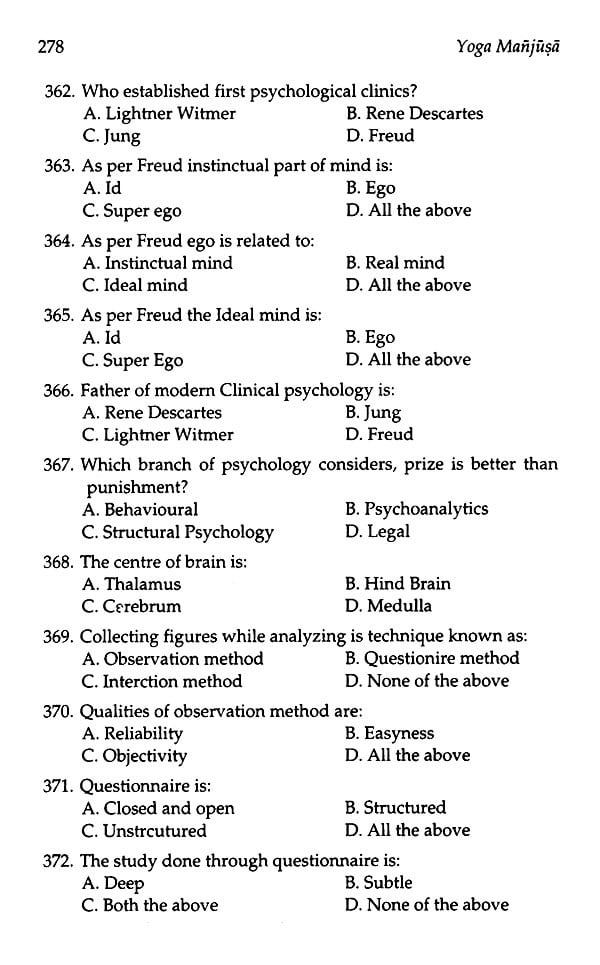 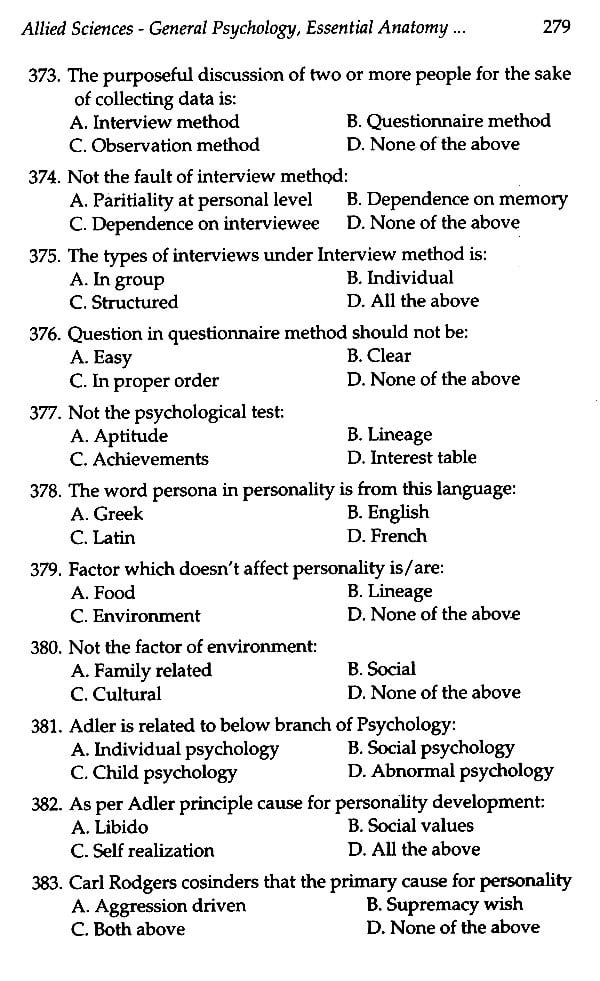 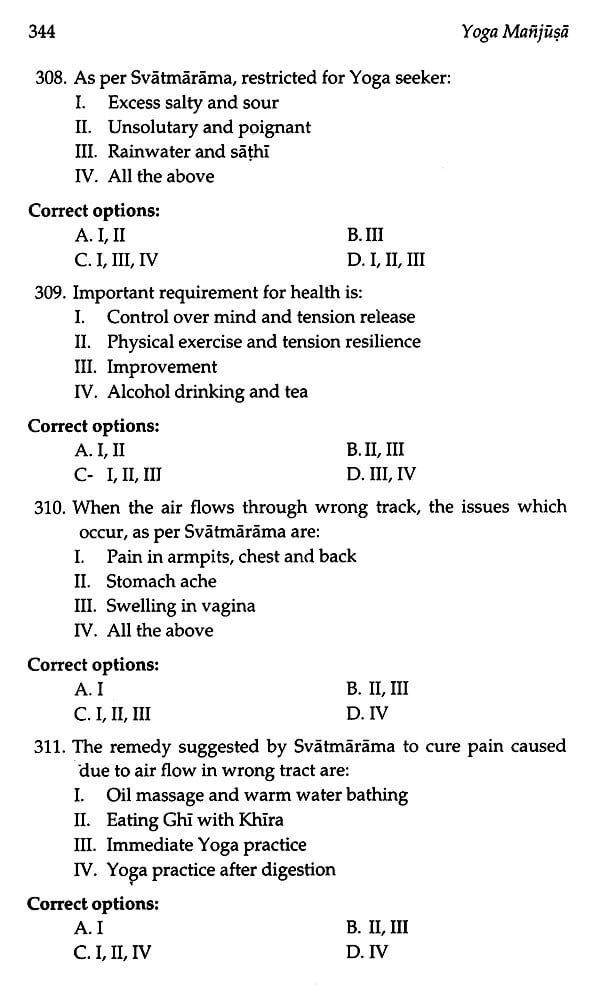 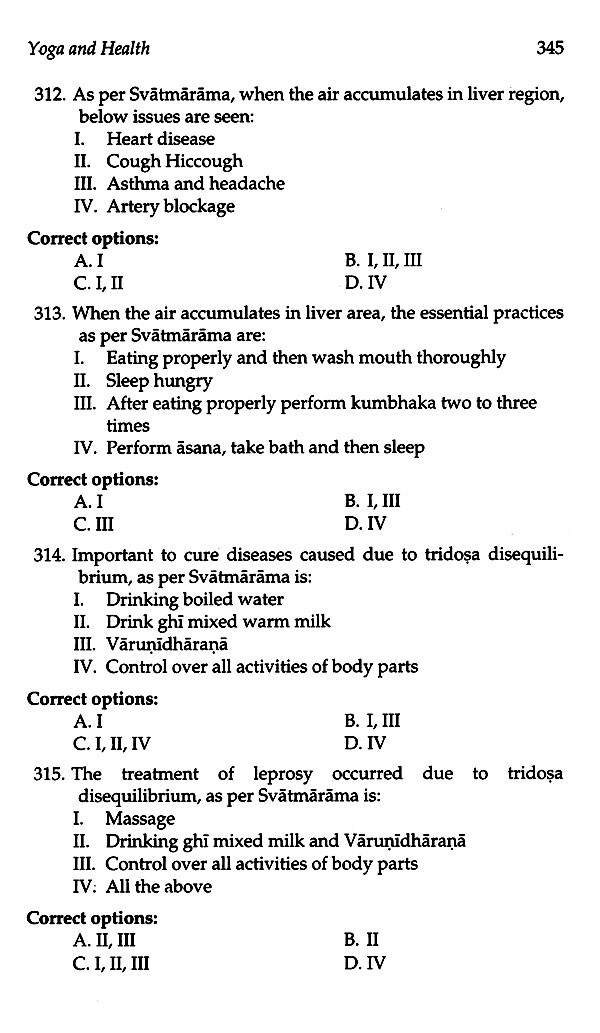 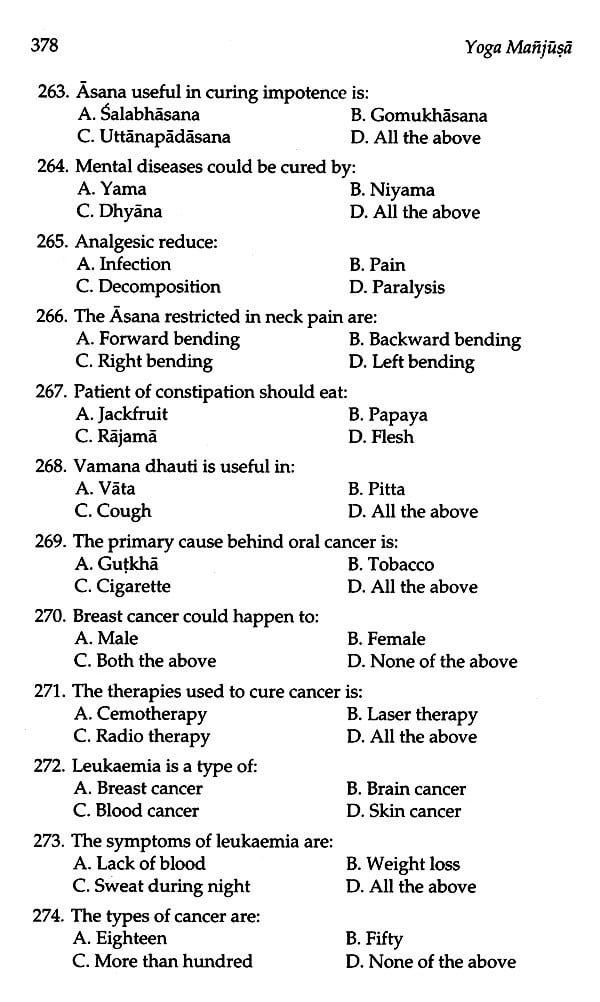 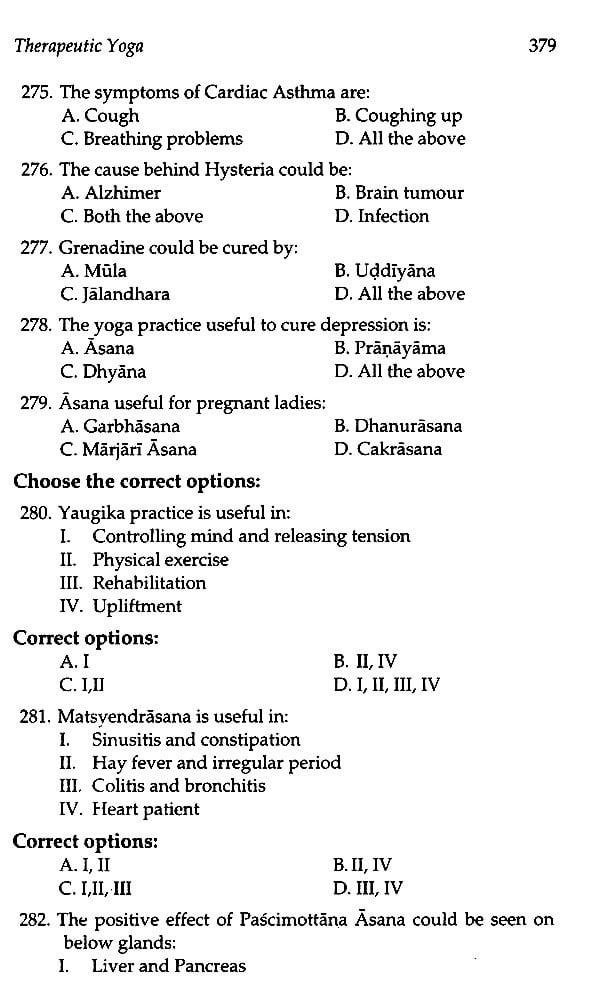 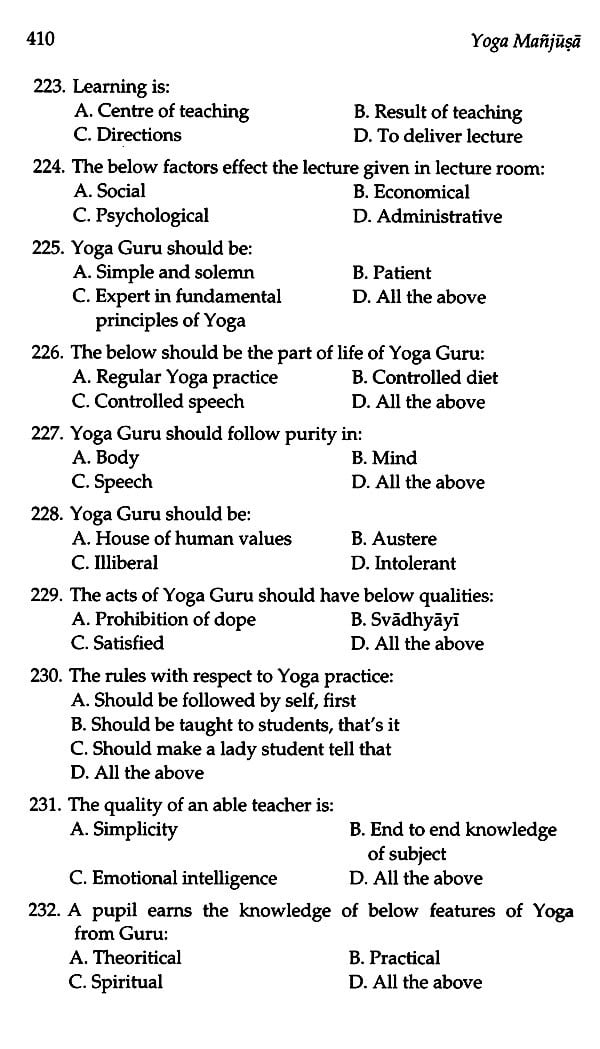 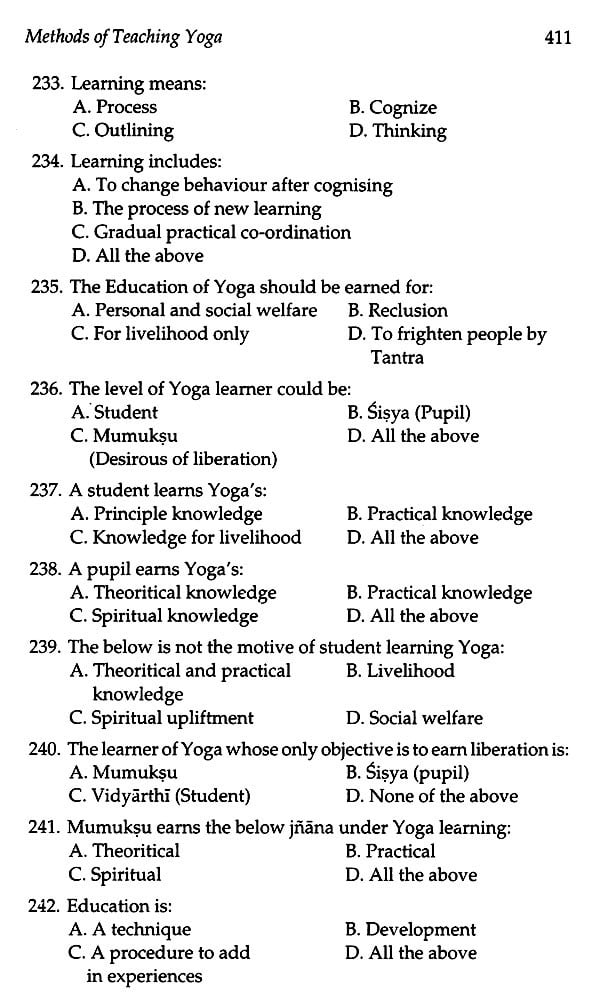