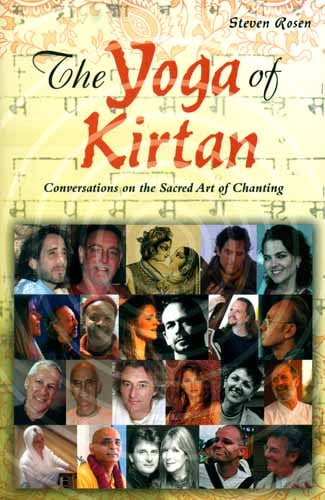 Kirtan and yoga are spiritual practices that originated in the mystic East. In fact, kirtan-singing for the Divine-is a form of yoga that engages the heart, evoking emotion and joy. The yoga of Kirtan: Conversations on the Sacred Art of Canting will introduce readers, many for the first time, to this blissful yogic tradition.

Here we learn of kirtan’s history and origins, its different musical forms, and the instruments used in its performance. But, most importantly, in The Yoga of Kirtan we hear the voices of kirtan yogis from ages past. They reach out to us through the hearts and minds of their present-day representatives, such as Krishna Das, Jai Uttal, Vaiyasaki Das, Ragani, and David Newman, among others.

Through the insights of these modern-day chanters, we get a peek into the ecstasy of the chanting process. By slowing us to eavesdrop on their intimate conversations with Vaishnava scholar Steven Rosen, they unlock the mysteries of this age-old yogic tradition, helping us to see why chanting is indeed yoga, and how easy and pleasurable it is to perform.

For countless ages, seekers have journeyed to the Ganges, or to similar holy places, to absorb themselves in sacred mantras, hymns that have been passed down for generations. These same seekers would often perform kirtan, celebrating special mantras with song and dance. Much to our good fortune, these mantras have finally come West, and kirtan now contributes to the rhythms of modernity. As a result, an exotic musical movement is emerging worldwide, turning age-old sacred chants into a new cultural phenomenon.

I remember the first time I heard kirtan. The year was 1972, and though only seventeen years old, I had been around the corner. In fact, I had been around many couners. The late 1960 was a no-hold-barred time of experimentation and change, offering young whippersnappers like me a whirlwind education in music, sex, politics, and drugs. Ours was a generation that reconsidered values and beliefs like few befoer us. Harsh realities made themselves known: the Cuban missile crisis, the bullets with names Kenned and King on them, the Vietnam War. But there were good things, too. And a lot of it: the Civil Rights movement was progressing rapidly, and women’s libbers were getting ever closer to liberation. There was Dylan and Davis. Cream and Coltrane, sly wanted to take us higher, and Jimi actually got us there. Mushrooms were anything but portabello and the Maharishi was on the cover of time with the tag-line, “Meditation: The Answer to All Your Problems?”

The question loomed large, especially as the Beatles went off to India in search of an answer. I, too, had dabbled in Eastern mysticism, though mainly by way of pop culture. To be more precise, I was reading the popular imports of the day: Suzuki and Watts, Isherwood and Mascaro, Castaneda and Gibran. And I was plondering the big questions: “Who am I? Why am I here? Is there a God?”

But even so, nothing could have prepared me for that group of otherworldly Hare Krishnas- complete with exotic dress, hand-cymbals and double-headed Indian drums-making their presence known near my favourite New York concert hall. I was there to hear loud, raucous rock music, but instead I would hear the sweet call of Krishna’s flute.

Like rock-n-roll icons from another time and place, these shavenheaded and sari-clad strangers swept through the area, affecting everything around them. Including me. I was mesmerized by their visual image, and more so by the melodic chants. At first they seemed to blend with the horn-honking cars and general cacoph-ony of New York City street. But then a sharp contrast emerged-an enticing oasis in the desert of my urban landscape. These were clearly American and European youths, peers perhaps, but their bright saffron robes and multi-colored saris spoke to me of something foreign. I read into their mysterious visage: monasticism and psychedelics, serious meditation and jouyful romp. Whatever the case, these people were clearly on another platform of existence, coming from a totally different place, representative of an alternate state of consciousness.

How was I to know that these were Gaudiya Vaishnavas, that-despite their Western bodies-they were the modern-day spiritual inheritors of Sri Chaitanya’s Vedanta? Awareness that “Hinduism” was a misnomer-an umbrella term for the many, diverse religions of India –or that Vaishnavas constituted the Hindu Majority. Nor could I know that, 500 years ago, Sri Chaitanya-ravered by his followers as a combined manifestation of Radha and Krishna – revolutionized the subcontinent with his method of ecstatic chant, using spiritual vocalization as yoga and developing it into a sophisticated science of ecstasy. How could I know that these were his emissaries, making a public display that would soon change my life?

Their sounds were energizing and, for me, somehow strangely familiar. Though I couldn’t understand the words, which, I knew, were either gibberish or some distant, sacred language, their songs spoke to me with an unmistakable message; “Arise sleeping soul! Move beyond the mundane and become situated in transcendence! Don’t delay! The time is now!”

I was captivated as I watched these surreal, spirited souls position themselves among the hippies and concert-goers on that particular New York evening. They seemed to be in full color while the rest of us were in black and white –a cliché, I know, but true nonetheless. Just then a large group of about a dozen assumed center- stage, to ensure their presence would be felt. And indeed it was.

The lead Krishna vocalist deftly vibrated his startling if pleasing melodies, and his battery of robed brothers and sisters responded dynamically, electrically, with each line stimulating a current of bouncy spirituality. Call and response, call and response, over and over in euphoric manner. They went through their hypnotic refrain again and again, methodically seeding up the tempo with each verse. The lead singer clearly knew what he was doings, his confidence brimming as he looked smilingly at his enthusiastic comrades. They, in turn, accommodated him, singing progressively faster, their bodies moving to the thunder-like rhythms of their drums. As they teased each mantra from their leader’s lips the chanting grew louder and more forceful, until the entire area was overtaken by their performance.

After a few moments, I fell into it – not that I joined in. Something stopped me. Perhaps it was conditioning, or maybe it was the fear that, allowing myself their ecstasy, I would never find my way back. Whatever it was, and despite the fact that my body showed no hint of it, my mind gradually obscured the alien nature of the spectacle before me; I somehow ousted the idea that it was unusual. Gradually, without warning, it became simpatico, comfortable. I found myself fundamentally enthralled, until I became one with the chant, at least emotionally. The now frenetic singing and dancing seemed like an old friend, a distinct part of me. I felt deep kinship with these harmonious strangers.

As it went on, their intensity and volume reached dramatic proportions-faces completely flushed, ear-to ear smiles, eyes rolling. Losing focus, some of them swayed with senseless abandon, while others jumped high, exhibiting blissful glee. Their intoxication seemed to surpass that of the concert-goers around them, and it was obviously more wholesome, triggered, as it was, by natural means and not by drugs, I looked at each of them, their absorption complete, their enthusiasm contagious. Going far beyond what I thought would be the climax of their earth-shattering exhibition, the now much appreciated –and somewhat envied-street chanter reached a breathtaking crescendo, and then, suddenly, the chanting stopped, and everyone within ear’s reach was visibly stunned. This was my introduction to kirtan.

What Exactly is Kirtan? kirtan in the East –on its home turf-is another matter altogether. The alien component simply doesn’t exist, since, in India, especially, it is not uncommon to see a kirtan party rousing through the streets-or in temples and homes-fiery singers using their voices and talents in praise of the Divine.

Kirtana (pronounced keer-ton-uh) is a Sanskrit would that means “praise” or “glory.” The more common Hindi pronunciation is “keerton,” dropping the final “a.” Simply understood, it is a form of song that centers on glorifying God, commonly performed in a “call and response” style of singing. There is Nam-Kirtan, which are songs composed of God’s sacred names, and Lila-Kirtan, or songs that celebrate the esoteric activities of the Divine. There is Sankirtan, when the songs of praise are performed in a group setting, and Nagara-Sankirtan, when the group is taken into the streets. And there are numerous variations on these terms and themes. But kirtan, in any form, is ecstatic.

A closely related idiom is bhajan (bah-jon), prayerful song, which involves an internal, more meditative technique, usually in s sitting position. This is in contrast to kirtan, normally performed while standing, at least, if not dancing. Bhajan literally means “worship” and is often conceived as a more solitary practice, though it is also generally performed in a group,l ike kirtan. In addition, bhajan is generally softer, whereas kirtan canbecome quite strident. Various sects and regions in India will attribute different labels to different forms of prayerful song, sometimes defining bhajan as a subcategory of kirtan and vice versa.

Those particularly adept at such singing are called kirtaniyas (keer-ton-nee-uhs) or kirtan-wallahs (keer-ton-wahl-uhs), and it is wonderful to watch them perform. Usually, traditional, exotic instruments accompany their songs and dance. In your average kirtan, you can expect to find a khol –also called a mridanga –which is a double- headed folk drum originating in northeast India. It has a body made of clay or fibreglass, with a small head on the right side (some four inches in diameter), and a larger one on the left (approximately ten inches). A pair of brass hand cymbals, known as kartals, is also a staple in any kirtan performance-the two cymbals, commonly two to five inches in diameter, are tied together by a piece of string or cloth and employed rhythmically, according to the beat of the chant.

Devotional singers often use harmoniums, too-especially in bhajan. Originally from France, the harmonium is a free-reed wind instrument with a keyboard somewhat akin to a piano or an organ. When it first made its way to India, kirtaniyas eschewed its use for devotional music; it was considered only suitable for low-caste street musicians. But in due course it found a home in the yoga of chant. The ektar-a single –stringed relative of the Western guitar-is also used in kirtan, though not as frequently as the other instruments just described. For those who know its tradition, this instrument brings to mind the paradigmatic female devotee, Mirabai, who, in sixteenth –century India, played the ektar while singing her now famous love-song to Krishna. Browed chordophones, such as the sarangi or the esraj – violin-like in nature-are sometimes used as well, as are flutes and tablas, and a background drone might be provided by a tamboura too. But these are for more elaborate kirtans the khol, kartals, and harmonium are the standard instruments, along with hand clapping. Contemporary Kirtaniyas, it should be noted, tend to engage more modern instrumentation, too, because ideally any form of musical accompaniment can serve kirtan’s purposes. 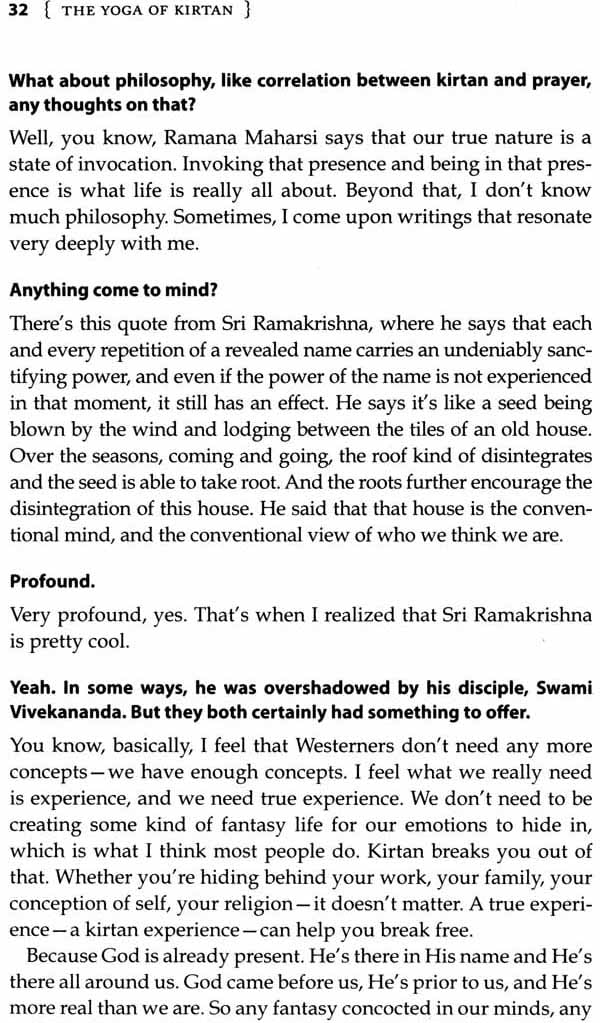 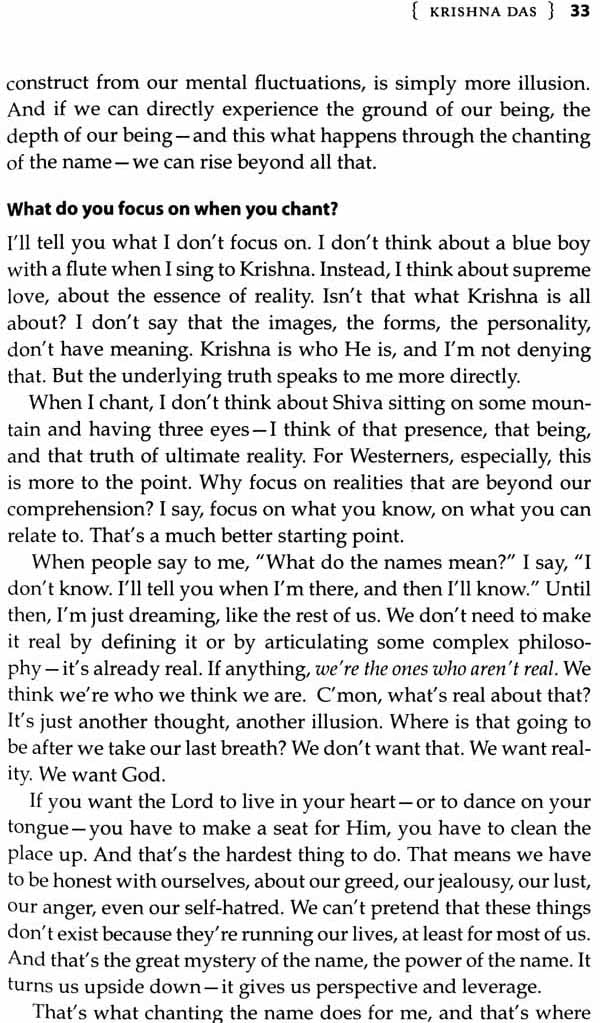 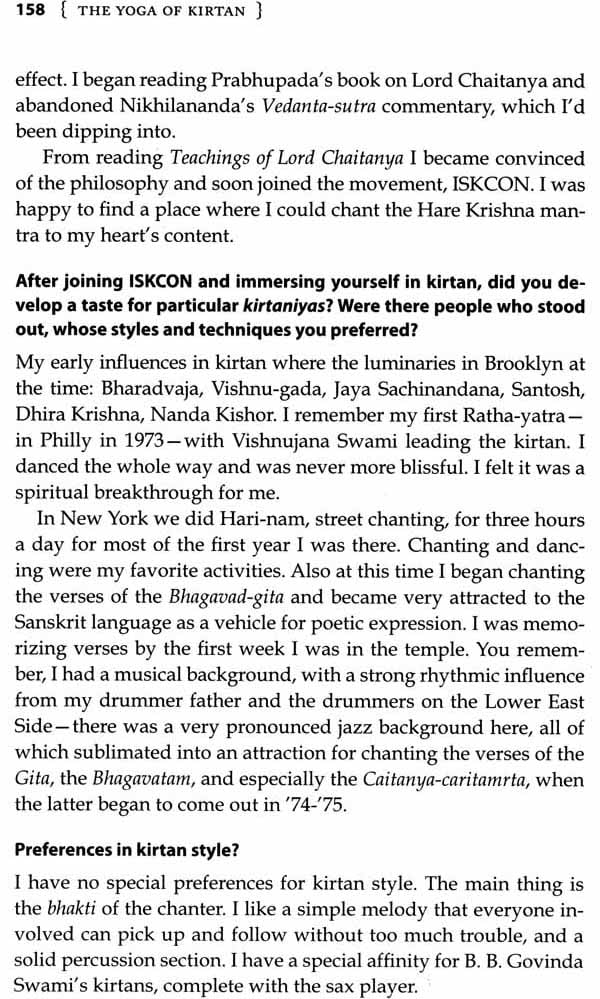 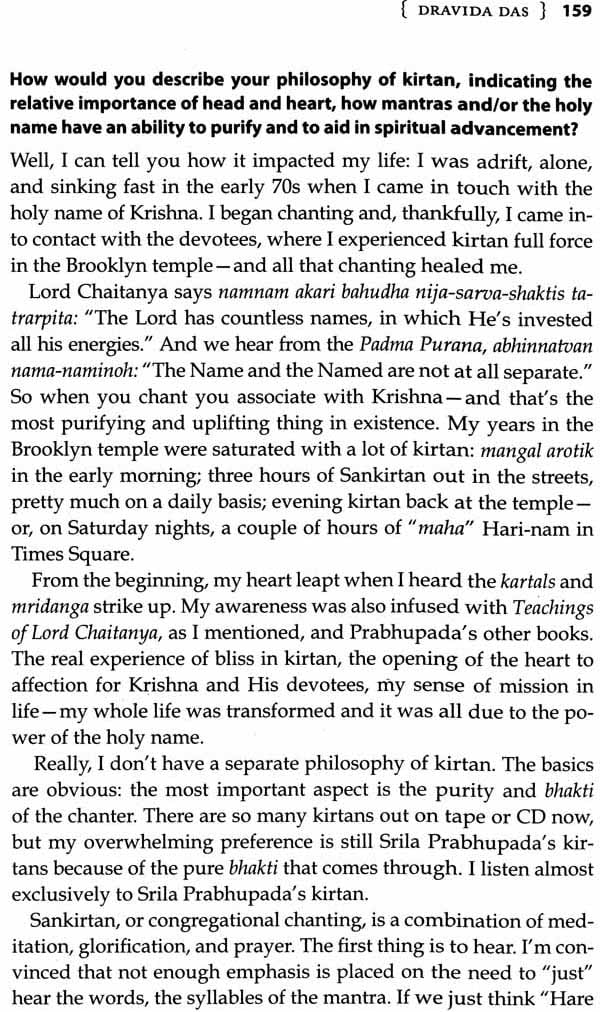 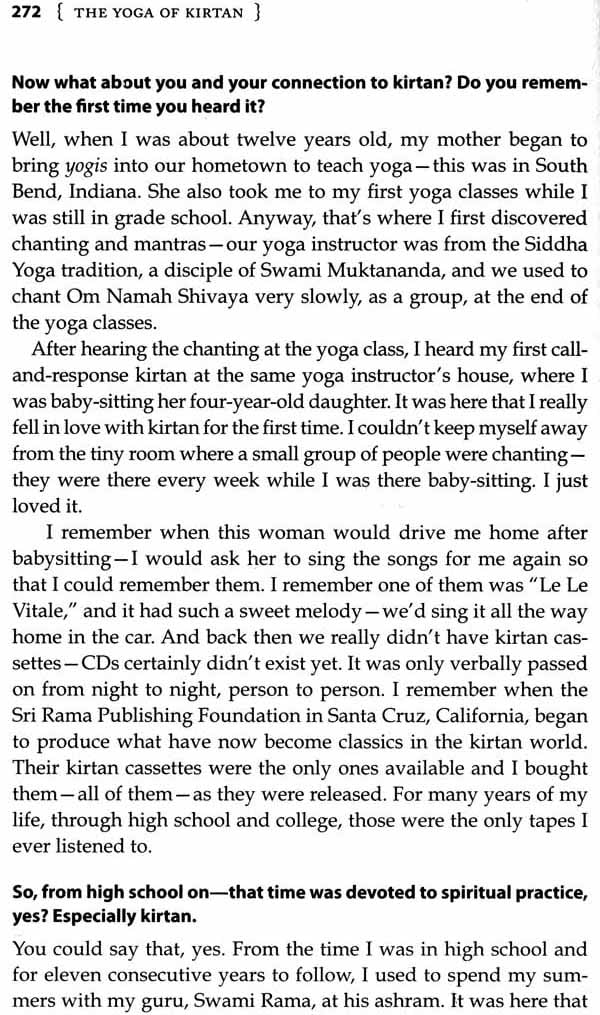 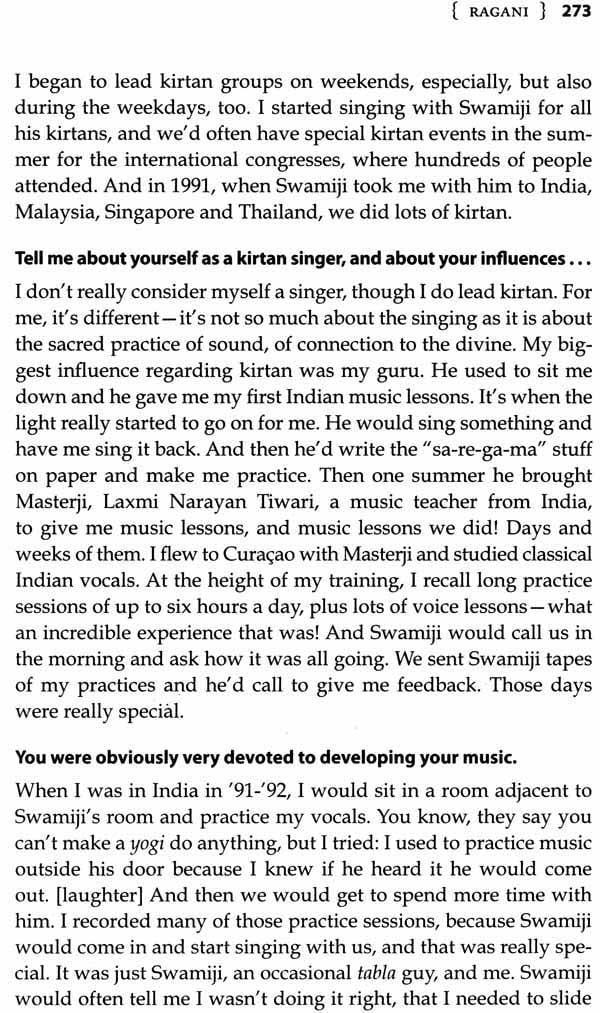 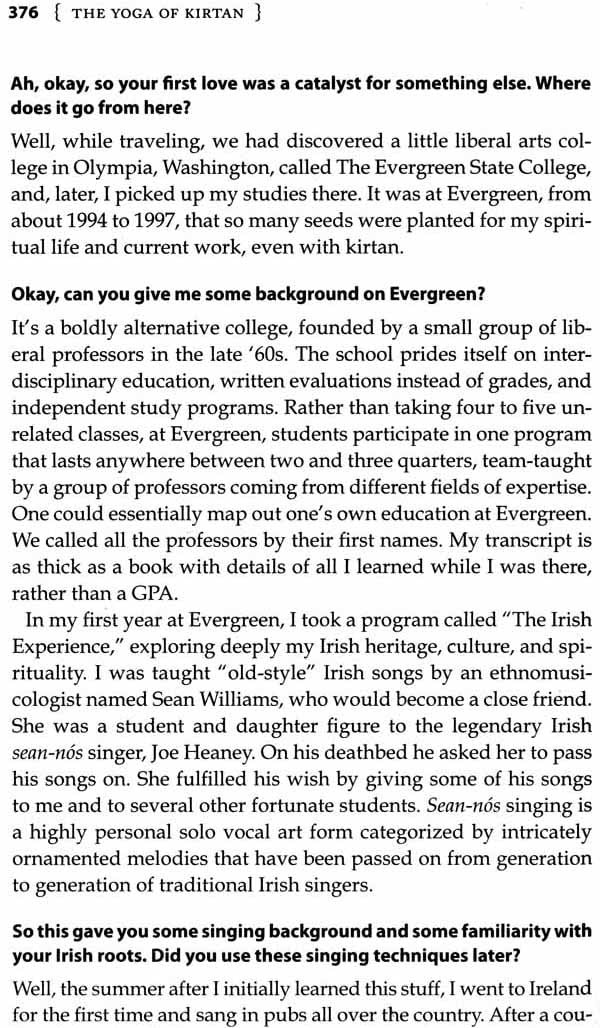 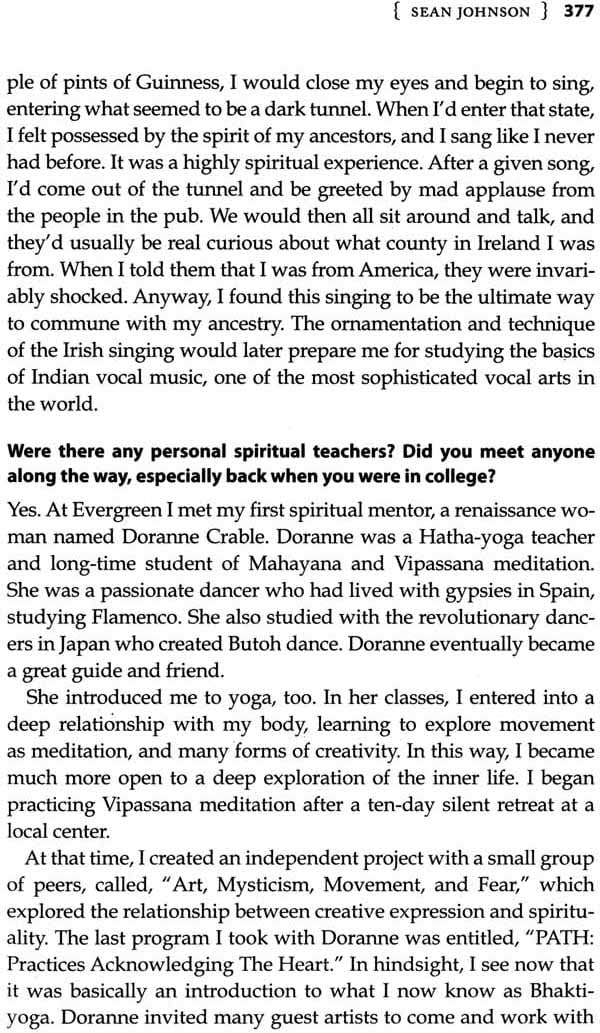 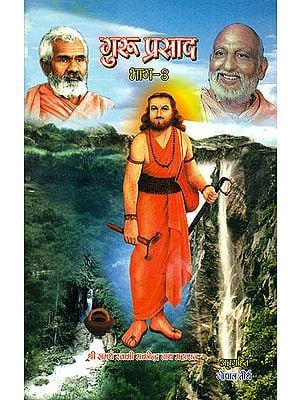 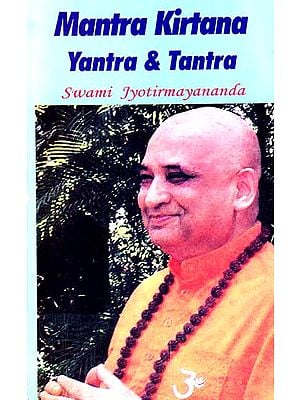 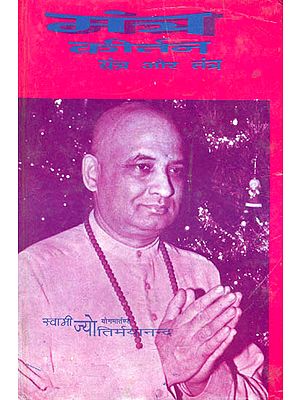 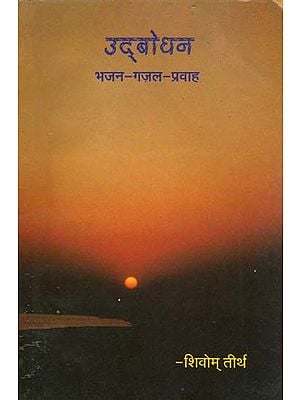 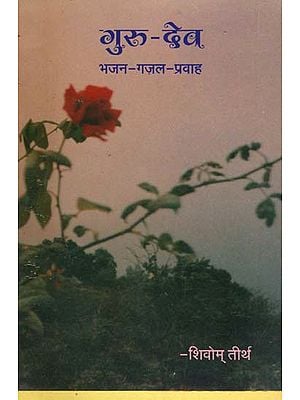 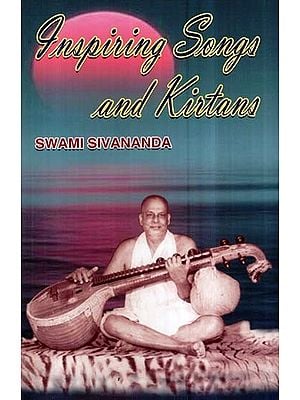 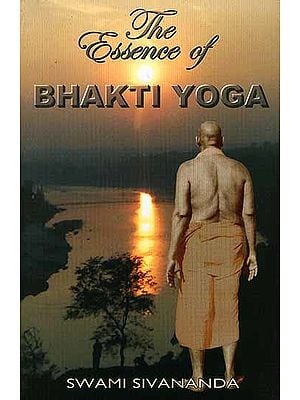 Stories from Yoga Vasishtha
By Swami Sivananda
$15.30
Best Seller
$17  (10% off)
Book FAQs
Add a review
Have A Question