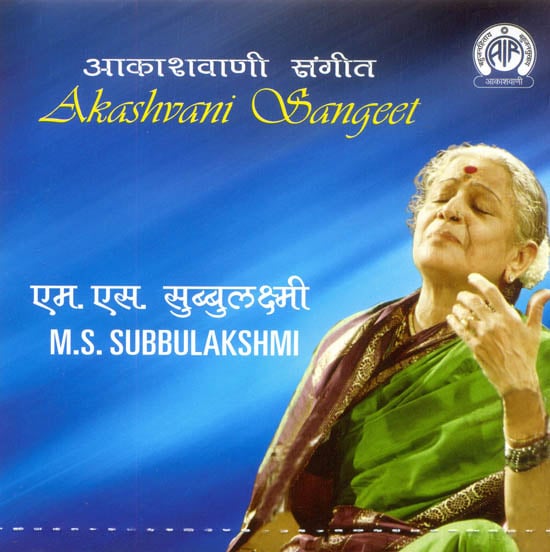 About the Audio CD

India identifies musical with the spiritual quest. Bhakti Poets of different ages and regions across the country form the Alwars, Nayanmars and Kannada vachana poets, to chaitanya, yadeva, Tukaram, Tulsidas, Mirabai, Narsi Mehta, Guru Nanak, Purandaradasa adn Tyagaraja, are seen as creators of immortal verse and seekers of God. Madurai Shanmukhavadivu Subbhulakshi (1916-2004) followed their path of devotion to God and compassion for mankind.

Born into a family of traditional carnatic musician, with a violinist grandmother and Veena artist mother, M.S. Subbulakshmi inherited a chaste legacy. Endowed with a resplendent voice and initially trained by her mother, her style was later honed and strengthened by Guru Semmangudi Srinivasa Iyer. He enriched her repertoire, and added depth to her alapana, niraval and swaraprastara. She was a regular broadcaster of All India Radio and took part in both the Friday night national programmes as well as the Akashvani sangeet samellans. She was awarded the Top grade by Air in 1966 and the national artiste status in 2004.

All her life, MS remained a disciple, augmenting her knowledge from a variety of sources, including Hindustani Musician like Dilip kumar Roy and Siddheshwari Devi. She was the first carnatic vocalist to make the verses of Mira, Tulsidas, Surdas, Kabirdas and Guru Nanak a regular part of her concerts, acquiring a pan-Indian following in the process. Marriage to freedom fighter thiagarajan Sadasivam (1940) introduced her to a wider world and to national leaders like Mahatma Gandhi, Jawaharlal Nehru and C. Rajagopalachari. They as well as millions of Indian were moved by the spiritual power of her music. Sadasivam guided and mentored her, she must use her unique voice not for personal gain but to serve worthy causes. This was reflected not only in the music she made but also in the life she led. She donated more than 6 crores charity.

She had quite film after her fourth film “Meera” (1947) which contributed significantly to her aura of saintliness. Honours and awards were heaped upon her, from the Sangita Kalanidhi of the Madras music Academy to India’s highest civilian award, the Bharat rantna. She won ad critical acclaim at prestigious Venues abroad, as in Edinburgh, London, Berlin, New York and Moscow.

Sadasivam and she remained devoted to Paramacharya of Kanchi, Chandra Shekhara Saraswati. “Maitreem bhajata”, composed by the sage for her performance at the united nations general Assembly (1966) urging the nations of the World to give up violence and cultivate friendship, was her finale in every concert thereafter.

The collection brings together some of MS. Evergreen favourites “Manasuloni”. In rounded off with a spate of brisk in double tempo swaras, “Entaromahanubhavulu”, is magnificently structured in a pace that does justice to the majestic flow of Sri Raga. A fine kharacharapriya prelude with swirling sangatis, teeming with brikas, announces “Pakkala nilabadi”. Whose niraval and swarprastara are brought off with classic restraint. The pantuvarali suite is organically conceived. The MS style of alpana has the phrases tumbling over each other with of alapana has the phrases tumbling over each other with length, continuity, resonance, and the irresistible force of a monsson waterfall, this is followed by “Sarasaksha” adorned with niraval on the euphonious line “Bhamini Samudaya”, which flows into the swaraprastara. Bauli is the surprise piece here. Nilakanta Sivan’s “Sambho Mahadeva” is a familiar item in the MS repertoire. But here both alapana and kirti bear the early MS stamp.

The voice is piercing sweet, there is a preponderance of unornamented notes. The modulation is dramatic, and every microtone is slotted with a ringing precision.

The collection established M.S. as an artiste steeped in the Classicism yet taking every listener on a pilgrimage to higher goals and their sentiments.