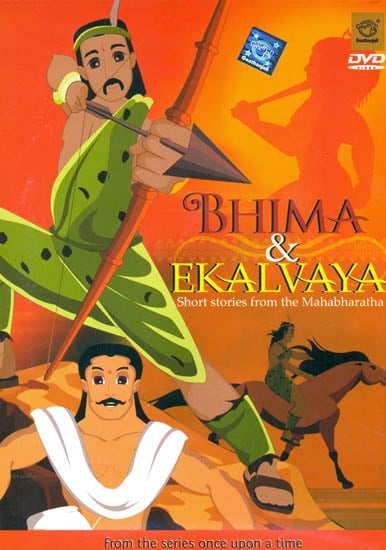 Bhima & Ekalvaya: Short Stories of The Mahabharatha (From The Series Once Upon A Time) (DVD)

Bhima
The name Bhima brings to mind images of a young, strong prince, equally well known for his physical strength as he was for his strength of character. The second son of the Pandavas, Bhima was the eternal problem solver, a great warrior and a noble prince. Son of Vaayu, the wind god, Bhima’s life story is the epitome of discipline, obedience and hard work. Each story about Bhima’s life carries an important message for all o us. In this series, exciting chapters of Bhima’s life have been highlighted – his hardships, obstacles and his triumphant successes.

Ekalavya
Ekalavya’s story emphasizes an important lesson for today’s generation of children – that of respecting one’s elders. This is a story about a young man’s loyalty to his guru and his deep and abiding respect and affection for him Ekalavya was a normal boy from a hunter’s family who had a tremendous interest in archery. He learnt archery on his own and proved his prowess to who he considered to be his Guru. When his guru asked for the ultimate sacrifice from an archer, he willingly made it. Such was his commitment, which we should all follow as an apt example of a truly devoted student.