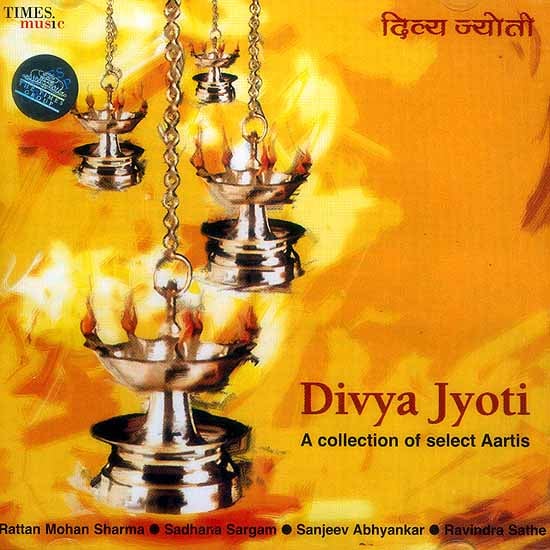 Ships in 1-3 days
Notify me when this item is available
From the CD :

The chief function of ritualism is determined by its symbolism. Most of our religious rites, like the Aarti we perform are intended for visualizing belief. Our gratitude to God is visualised by our offerings of incense, flowers, grain and fruit on the altar. The Aarti has a dual significance in Hindu religious life. On the one hand is the lamp, incense, flowers and chanting that invoke the God or Goddess, and on the other hand is the use of music to explicate the mantras in praise of the Lord.

The music, song, incense and lamp merge to symbolize the seat of Shakti. In many senses, the Aarti in itself is complete worship. Having worshiped the Lord with love- performing abhishek, decorating the image and offering fruits and delicacies, we see the beauty of the Lord in all His glory. Towards the end of every ritualistic worship (pooja or bhajan) of the lord while performing the aarti, our minds are focused on each limn of the lord as it is lit up by the lamp. It is akin to silent open –eyed meditation.

Performing the Aarti is a part of the Upakara. It is the demonstration of the love and devotion of a bhakt (devotee) towards the lord. Performance of Aarti cam be very elaborate and includes use of lamps (diyas), bells, sindoor, camphor, flowers, etc. which have their own significance in this ritual.

Ringing of a bell or ghanta during prayer or worship eliminates distracting sounds and helps the mind to concentrate on the object of worship. Aarti being performed with camphor has a spiritual significance. Camphor burns itself out leaving just its perfume – it represents our Vasanas, unmanifest deseres. So also if we were to take refuge in the lord, obtain knowledge, these desires will get burnt out. In rarthly terms, it signifies the need to serve society, in the process spread the perfume of love and happiness to all. We close our eyes while performing the Aarti as if to look within. The self or Atman is within us. Self- realization can be achieved by knowing thyself, with the flame of knowledge that comes from one with the eternal Atman that is the lord.

At the end of the Aarti we place the hands over the flame and touch our eyes and top of the head. The divine flame of the Lord lights up our vision as we absorb the Shakti invoked by our worship. With the Aarti comes the flame, which signifies light or knowledge. The Aarti is the means to invite the divinity within.

The philosophical meaning of stars and fire- the natural sources of light. The lord is the source of all these wondrous phenomena of the universe. The Aarti turns our attention to the very source of all light that symbolises knowledge and life. The sun is the presiding deity of the intellect, the moon that of the mind, and fire, that of speech. The lord is the supreme consciousness that illumines all of them. Without him the intellect cannot think, nor can the mind feel nor the tongue speak. The lord is beyond the mind, intellect and speech.

Rattan Mohan Sharma, a disciple of Pandit Jasraj, is a protégé of the illustrious Mewati Gharana whose stalwards include his late grandfather, Pandit Mitiramji and his uncles, Mahamopadhyaya Pandit Maniramji, Sangeetacharya Pandit Pratapnarayanji and Sangeet Martand Pandit Jasrajji.

One of his recent releases through Times Music has been the recitation of the Gayatri Mantra which has been the most successful audio release in recent times.

An ‘A’ grade artiste of all India Radio, Rattan has been the recipient of the prestigious Shankarrao Vyas award for his topping grades in the Sangeet Visharad examinations conducted by the Gandharva Mahavidyalaya. Other awards won by him include, The Sangeer Martand Pandit Jasraj Rotating Trophy’ awarded by the rotary club of Mumbai- Shivaji Park, the Mewati Gharana Gaurav Puraskar and Sur Ratna award of the Bhatkande Lalit Kala Shikshan Samiti, Raipur.

Sadhana Sargam is a very talented singer. She is lucky to have been blessed with the right musical genes. Sadhana is the daughter of renowned classical singer Neela Ghanekar. She was initiated into vocal music training at the age of four. When she was 10, Shadna received a central government scholarship, and this led to her seven- year training stint with Pandit Jasraj. She would also pitch in for Vasant Desai, and sing for documentaries children’s films. Later the composers Kalyanji- Anandji took her under their wing, and there has been no looking back since.

Sanjeev Abhyankar was born on 5th October 1969. Today he is an extremely popular artiste of the Mewati gharana.

He started learning Hindustani classical Music from the tender age of eight. In the year 1983, he started training as per the ‘Guru Shishya parampara’ with Pandit Jasraj that continued for ten long years. Since then, he has performed in several the prestigious conferences and art circles all over the globe. His impassioned rendition of Marathi abhangs and Hindi Bhajans reflect his easy grace and versatility.

In the early stage of his career, he received National scholarships and fellowship from the government of India and then the President’s award from the all India Radio in (1990), F. I. E. Foundation national award (1996) and the coveted national award (1998) as the best male playback singer, for the Hindi film ‘Godmother’, to name a few.

Ravindra Sathe was born in Pune, in the year 1951. He trained under Shri. Mukundrao Gokhale and Shri. Nagesh Khalikar, both exponents of the Gwalior gharana. Eight years of rigorous training under these masters made him extremely sensitive to the finer aspects of singing.

In the year 1972, he won the state government award for the best actor- singer for the play Ghashiram kotwal and in 1978; he won the state award for the best playback singer. Few know that he is also a sound engineer and has worked for many award-winning documentaries at the Doordarshan Kendra, Mumbai. His tryst with music and theatre has also taken him to foreign lands. Having already sung for more than 200 audio cassettes under prestigious labels, he continues to impress the listeners with his masterful musical renditions.