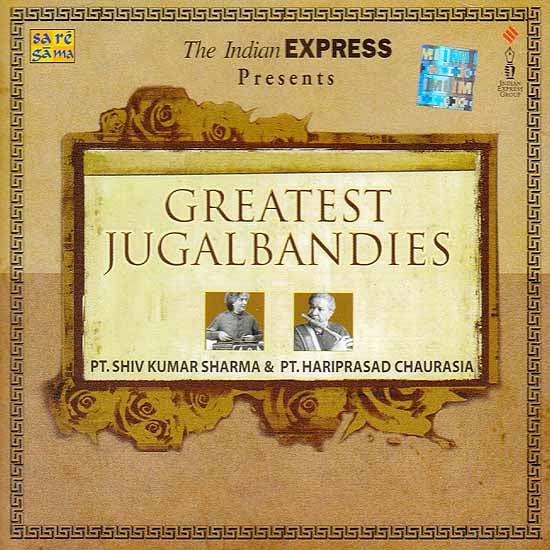 Pandit Shivkumar Sharma, Pandit Hariprasad Chaurasia and Pandit Kasinath Misra made extensive tours of Europe and the U.S.A in 1970 and again in 1973, Both occasions were extremely successful and the artists were given fine receptions at concerts and television appearances in many major western cities. Two ragas were recorded whilst they were in Stockholm on May 30th, 1973. The musical style chosen is Yugal Bandi, which simply means duet. Throughout the album Santoor and Bansuri (flute) exchange musical of quite magical beauty.

Pandit Shivkumar Sharma was born in Jammu, Kashmir, in a highly musical family. He studied table under the guidance of his father, Pandit Umadutt Sharma, until later the santoor caught his imagination. Despite the santoor’s long history of folk usage, it was disappointing for the purpose that Panditji had in mind. He proceeded to introduce a number of modifications which vastly improved the traditional instrument and worked to perfect the playing technique. His efforts have blazed a trail wherever he has played, in both east and west. Single handedly he has brought the santoor to the fore as an instrument for the performance of both Indian classical music. In Panditji’s hands the instrument has a subtle flexibility, giving a shimmering, precise sound that is a marvelous delight to hear.

Pandit Hariprasad Chaurasia hails from Allahabad in Uttar Pradesh, where he learned the elements of classical singing from a local vocalist, Pandit Raja Ram. When he was sixteen Panditji Listened to a flute recital by Pandit Bhola Nath a fine instrumentalist from the holy city of Varanasi and began to learn flute (bansuri) under his guidance Hari Chaurasia broadcast for the first time in 1955 and became a staff artiste with All India Radio in 1957, first a Cuttack and later at Bombay, where he remained until 1964. In 1966 he appeared for a benefit concert a London’s Royal Albert Hall on behalf of the Nehru Memorial Fund and has toured the west several times since, Hariprasad Chaurasia’s flute technique is astonishing. Flute players came from far and wide to listen to his Swedish performances and were simply devastated by his pitching, his fingering and the control of glissandi.

Pandit Kasinath Misra comes from Benaras, centre on Indian religion and arts. He represents the famous Benaras, or Purab Baaj, tradition of tabla and is a disciple of the late Pandit Anokhe Lal of Benaras. Himself a well known exponent of the Benaras Baaj School of tabla playing. Kasinathji has traveled extensively. Both in India and abroad.

The Santoor is one of the oldest of Indian instrument and was originally known as Sata Tantri Veena (100 stringed lute). The Persians named it santoor for reason of its 100 strings and the name has remained. Unlike other stringed instruments the santoor is played with soft wooden strikes, made of walnut. It has long been used as a folk instrument and for the accompaniment of singing in a Kashmir valley, but it is Pt. Shivkumar Sharma who has established the santoor as a solo concert instrument. Derivatives of the santoor are to be found in many parts of the world, where they are thought to have been introduced by itinerant gypsies; Such instruments include Yang Chin in China. Zymbalon in Hungary and Rumania, santoor in Greece, santoor in Iran, Kantele in finland and the piano throughout the west.

The Bansuri (flute) has been known in India from time immemorial and is associated with the legendary Lord Krishna. Originally a folk instrument, it has gained a prominent status is recent times as a solo concert instrument. Much of the credit of this is due to the late Pannalal Ghosh and the tradition is continued now by Hariprasad Chaurasia.

The Tabla is the most widely used percussion instrument in northern India, dating, in its present form from about the thirteenth century. It consists of two drums. The bahya is played with the left hand and is usually made of copper. The tabla is played with right hand and is generally of wood. Both drums are tunable with thongs and wooden blocks and have drumheads loaded with a paste of manganese dust, boiled rice and tamarind juice and modify the mode of vibration.

The Tanpura is used all over India for drone accompaniment. It has four strings, with small silks placed between the stings and the main bridge to enable the sounds of the overtones to the clearly heard.