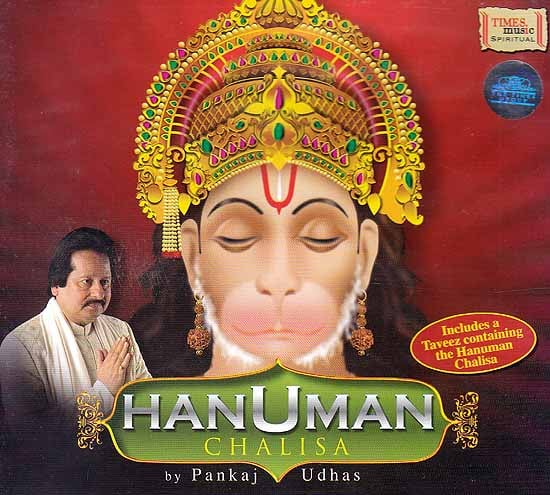 (Includes a Taveez Containing the Hanuman Chalisa) Hanuman Chalisa was written by Goswami Tulsidas in the sixteenth century. It is one of the most sacred and chanted hymns in Hinduism. The hymn describes the devotion of Sri Hanuman towards Sri Ram. Sri Hanuman helped Sri Ram in the battle against evil and killed Ravana. Sri Hanuman was admired for his valour and might. He had the strength to enter the kingdom of Ravana and turn the city into ashes. He with his enormous army of brave hearts was instrumental in the conquest of good over iniquity.

Forty in Hindi is called Chalees and the hymn comprising forty verses is called Chalisa hence the name Hanuman Chalisa. Lord Hanuman was the beloved of Maryaada Purushottam Lord Rama Millions of Hindus recite Hanuman Chalisa on every Tuesday and Saturday. Hinduism believes that chanting this hymn solves problems and inculcates strength and fearlessness.

Blessed with a mellifluous voice Pankaj Udhas is a world renowned Ghazal Singer.

His Ghazals have been delighting fans the world over and he is admired for his music prowess. Pankaj is a celebrated artist and has been honoured by several prestigious organizations and associations throughout the world for his outstanidn contribution to Ghazals.

Pankaj Udhas was born on May 17, 1951 in Jetpur near Rajkot in Gujarat to a family of Zamindars. Even before he was five Pankaj Become conscious of his singing skills. At the tender age of eleven he sang ‘Ae mere Watan Ke Lagon’ in front of a mammoth crowd amidst thundering applause.

He joined the sangeet Natya Academy in Rajkot and learnt the nuances of playing the Tabla. He came to Mumbai to pursue his Degree in Science and showcased his voice at the inter collegiate level.

Hasan and Begum Akhtar. He was so attracted towards this form of music that he went on to learn Urdu in order to grasp the depth of Ghazals Pankaj Udhas had found his destiny. From his first ghazal album Aahat that was released in 1980 he has gone on to release around 40 albums.

After being met with great appreciation for his Ghazals Pankaj Udhas also made his foray into films gaining a lot of popularity with the famous Chitthi Aayee Hai Song form the film Naa Bringing tears to every music lover’s eyes. Moreover his appearance on screen made him a star in his own right.

Deeply grateful to music for providing him with so music acclaim Pankaj decided to give the music world something in return. He started a talent hunt program called Aadab Aarz Hai on Sony Entertainment Television and gave opportunities to a lot of youngsters to present their talents.

Even despite his work commitments Pankaj Strives to find time for social work. His sheer determination to do something good for the society has led to his association with organizations like Cancer Patients Aid Society Parents Thalassemia Unit Spastic Society of India and Mind. He works extensively for eradication of leprosy thalassemia, cancer and for the cause of the mentally retarded. In his 17 years social work he ahs numerous concerts and collected over Rs. 50 lakh for social organizations. He even donated the funds received form the sale of his album Nabeel released in 1989 to the Cancer Patients Aid Society. He has done everything in his capacity as a citizen of India to make the world a better place to live in.

Now for the first time Pankaj Udhas has lent his beautiful voice to a spiritual album. The album comprises two tracks, Hanuman Chalisa and Ram Raksha Kavach Pankaj renders these tracks in his inimitable style and provides his listeners with what key expect form him the very best.